How to Thrive in Isolation, According to Native Greenlanders

As we cope with the global coronavirus pandemic, locals in Nuuk, Greenland, teach us four important lessons about living in isolation.

Living in New York City during the coronavirus pandemic and adjusting to this new way of life, in as few words as possible, hasn’t been easy.

To be a New Yorker is to be a social creature in a perpetually crowded habitat. We thrive on packed subways, amongst throngs of tourists and locals, on busy streets and sidewalks, in bustling shops, restaurants, and bars. We, along with over half the world’s population living in high-density urban areas, have almost no concept for working, playing, and living in even moderate solitude.

Of course, we’re not the only ones facing this dilemma: For most of the world, operating remotely is an unfamiliar day-to-day. But for a few thousand people around the globe, isolation is simply what they know. 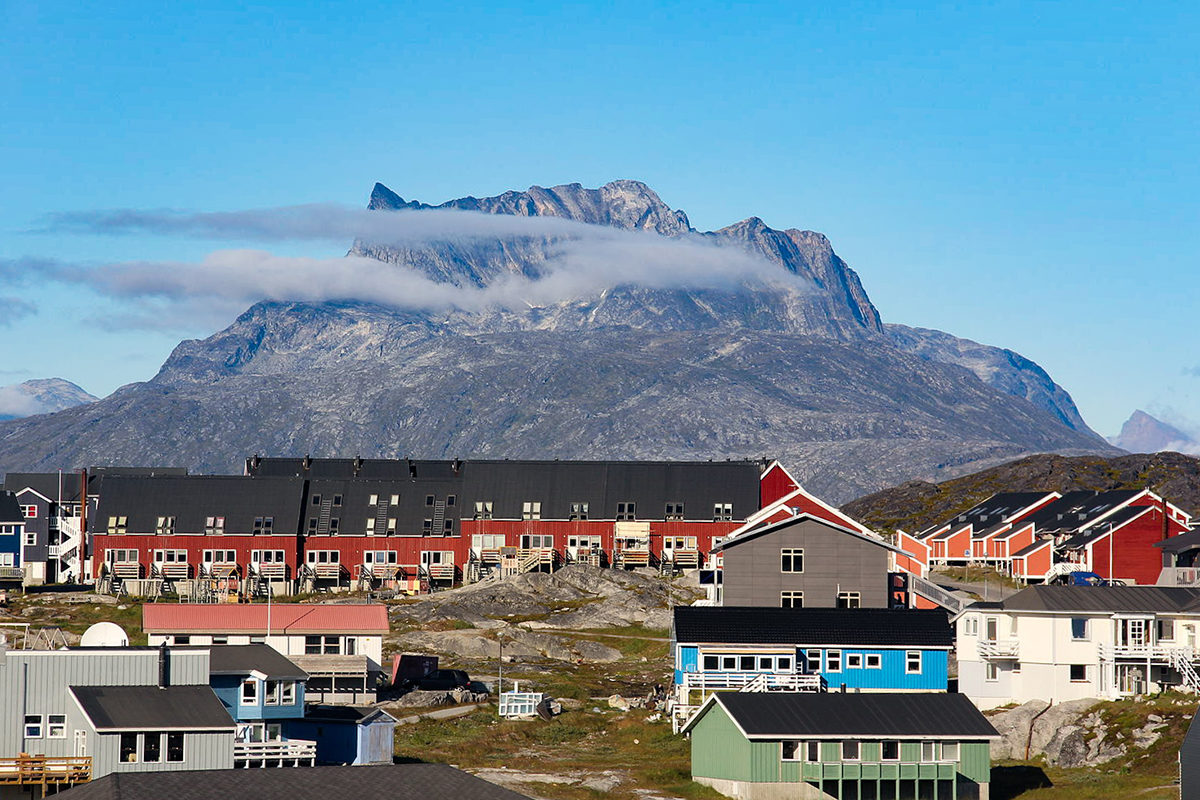 Situated on the frozen island’s southwestern coast, Nuuk, Greenland, is a capital city with less than 18,000 inhabitants. (As of 2019, Greenland was home to just 56,000 people, making it the nation with the lowest population density on Earth.) To travel to Nuuk, even from an international hub like New York, requires at least two flights (only two airlines, Air Greenland and Air Iceland Connect, land in Greenland). The majority of the country is a tundra, so domestic travel is limited.

Still, thousands of miles from the hustle and bustle of major cities (or even minor locales), communities thrive in a place where solitude is the normal mode of existence. The isolation is acknowledged, but it isn’t cursed—in fact, it’s celebrated, even when it is inconvenient.

While the rest of the world does their best to cope during quarantine, the residents of Nuuk can teach us valuable lessons about living in relative solitude. Below, three leaders in Greenland’s creative community—Nivi Christensen, director of the Nuuk Kunstmuseum, Nuuk’s premier art museum; Arnakkuluk Jo Kleist, the director of Greenland’s National Culture Center, Katuaq; and Hanne Brunn, the director of the Nuuk Lokalmuseum, an art gallery and local history museum—lend us their advice on coming to terms with our newfound isolation, focusing on the good instead of the bad, and finding happiness in this strange new world. 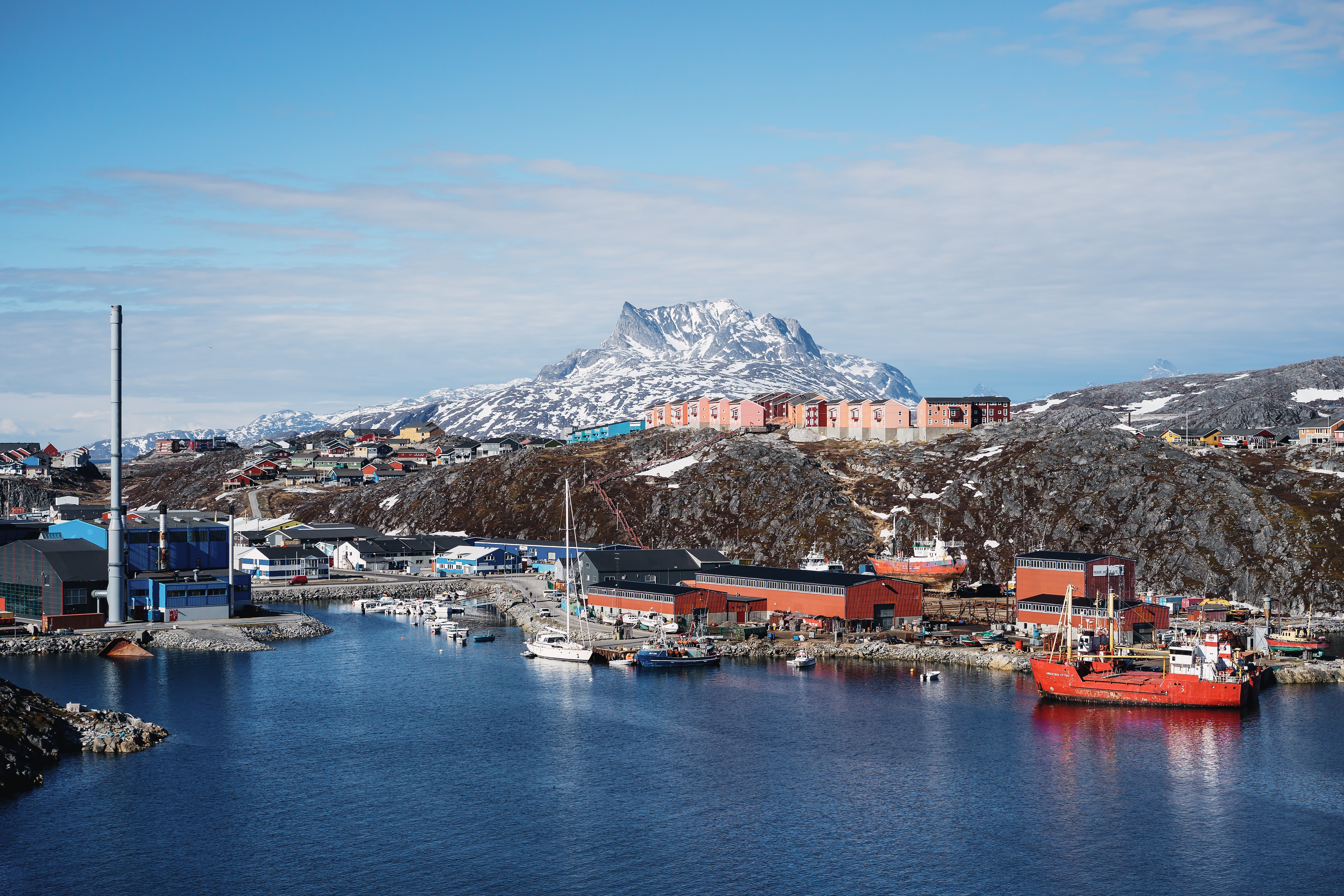 All inhabitants of Greenland live in coastal cities; the interior of the country is all tundra. Photo by Filip Gielda.

1. Accept things as they are

Although it’s definitely easier said than done, it’s important to accept the reality of the present situation sooner rather than later. The faster we learn to recognize that it is what it is, the faster we can learn to adjust in ways that will help us make it through the long haul. In Greenland, acknowledging that your location will affect your way of life—and that there is little you can do to change that fact—keeps frustration low.

“We are in the middle of the Arctic, so it’s a matter of perspective,” says Arnakkuluk Jo Kleist. “When you live on the world’s biggest island with great distances between cities and villages, you have to accept that some things take longer. If you want everything to happen quickly, Greenland is not the place to be!”

“It’s a matter of perspective.”

On the bright side, accepting the reality will also help you hone in on the things that make it good. “My country and city and the people who live here inspire me to do my best and enjoy life as much as possible, to be proud of my culture and our way of living, to respect nature and use it with respect, to live life to the fullest,” Jo Kleist says. 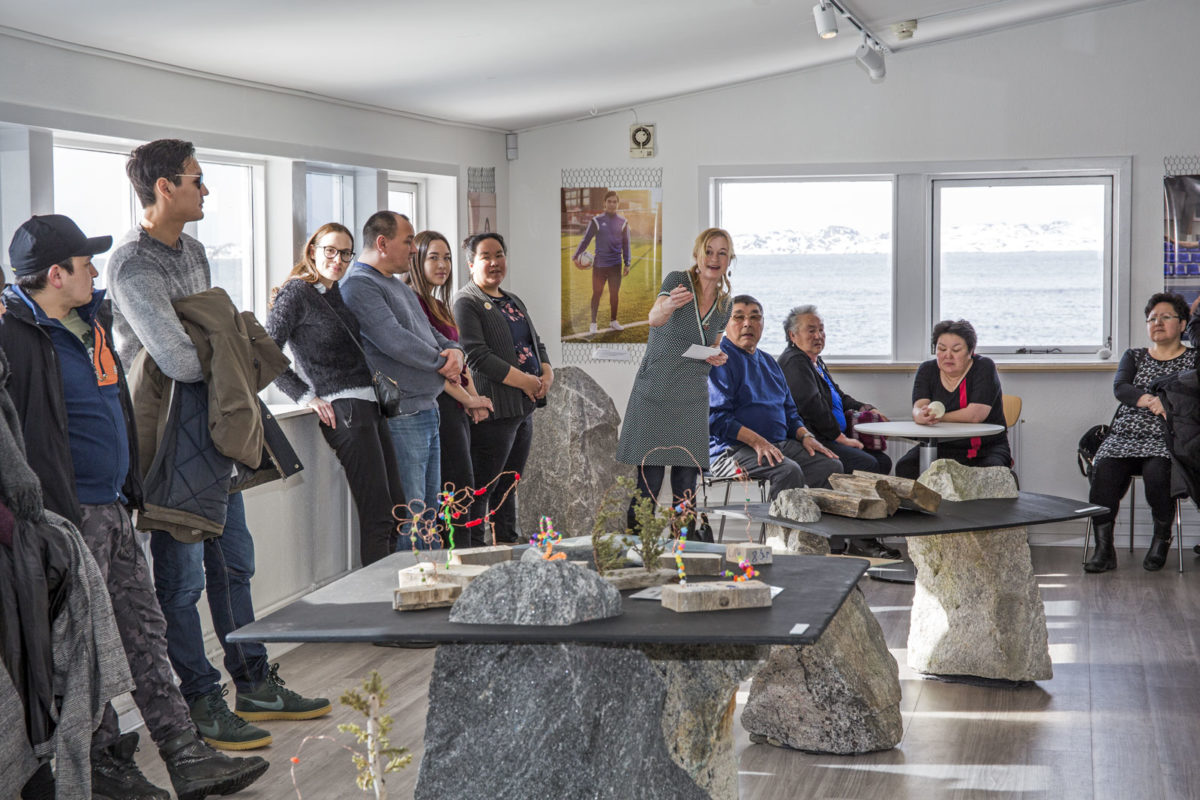 Focusing on the possibilities of isolation, rather than the detriments, may be another key to coping. Born in Greenland, Hanne Brunn lived abroad in mainland Europe for several years, working in The Hague, Netherlands, and Copenhagen, Denmark. Her eventual return to Nuuk also meant a return to a slower, less eventful lifestyle—but Brunn found that adopting a “less is more” mentality and being open-minded to the easygoing pace made the transition easier.

“Compared to Copenhagen, it is a totally different pace. People are much busier in Copenhagen, rushing from A to B,” Brunn says. “Here, it is an easier life because there aren’t so many things you can do. You have one cinema, you have one swimming pool, you have those shops. It is small, so it makes decisions easier in that way.”

“It is an easier life because there aren’t so many things you can do.”

Plus, similar to Iceland—another country where a harsh natural environment warrants artistic output—those who pursue creative ventures in Greenland may find themselves in luck if they allow their isolating environs to encourage rather than deter them.

“Being surrounded by arctic, beautiful, and harsh nature shapes the people who live in the middle of it,” says Arnakkuluk Jo Kleist. “We have a country and capital with a great creative community. So many people are musicians or artists in some way.”

Why Northern Norway Is Worth Visiting in the Dead of Winter → 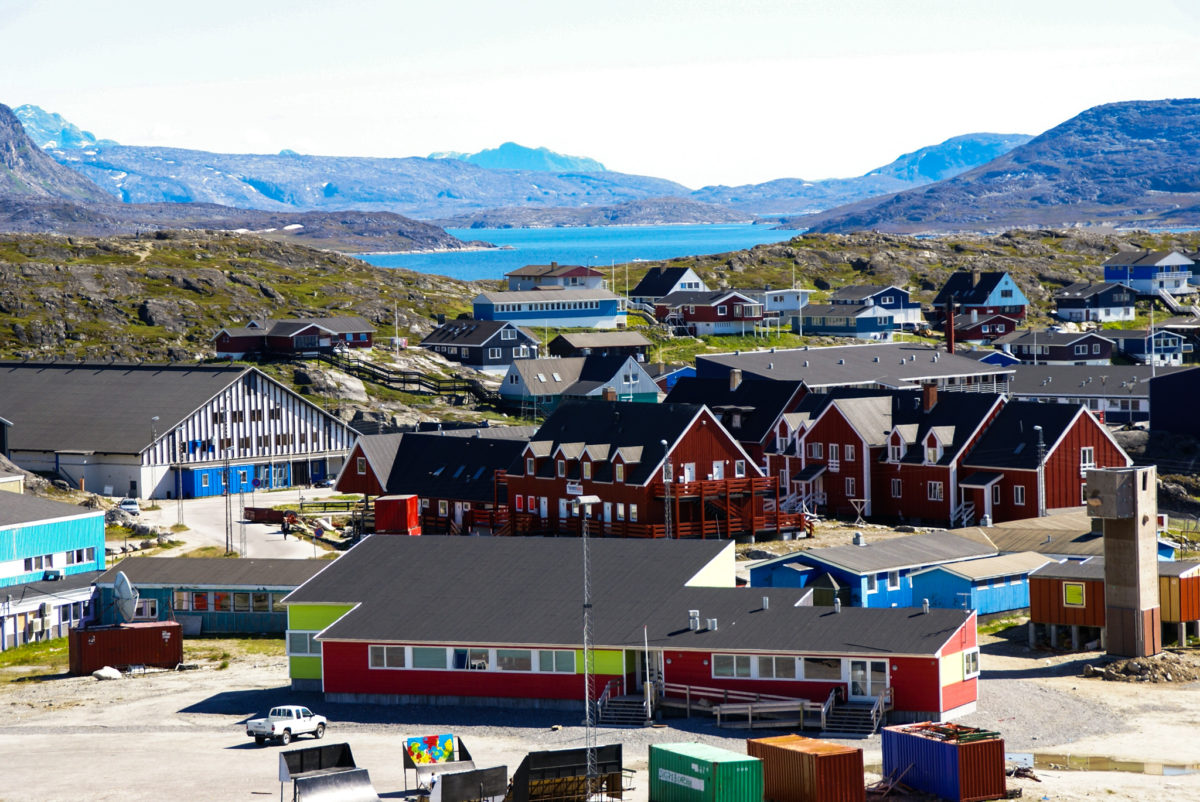 Many Greenlanders rely on creative outlets to foster community and deal with long winters and isolation. Photo by Greenland Travel.

3. Let it foster a sense of community

While handshakes and hugs have gone on hiatus during quarantine, we’ve seen displays of affection through other caring and imaginative means: music being played from balconies, birthday and graduation celebrations over video chat, and local coalitions forming to support service workers, uplift small businesses, and deliver essentials to at-risk groups.

This sense of community is something that residents of Greenland, who bond over shared experiences in the tundra, have long appreciated and recommend holding on to when the walls feel like they’re closing in. “We have a very close relationship to neighbors and people around us,” says Christensen. “Working with who and what is close by gives you the opportunity to be spontaneous and creative.”

“Greenland is a country of opportunities if you want to make a difference,” Jo Kleist adds. “We have to be strong and support each other because we cannot easily go to other places.” 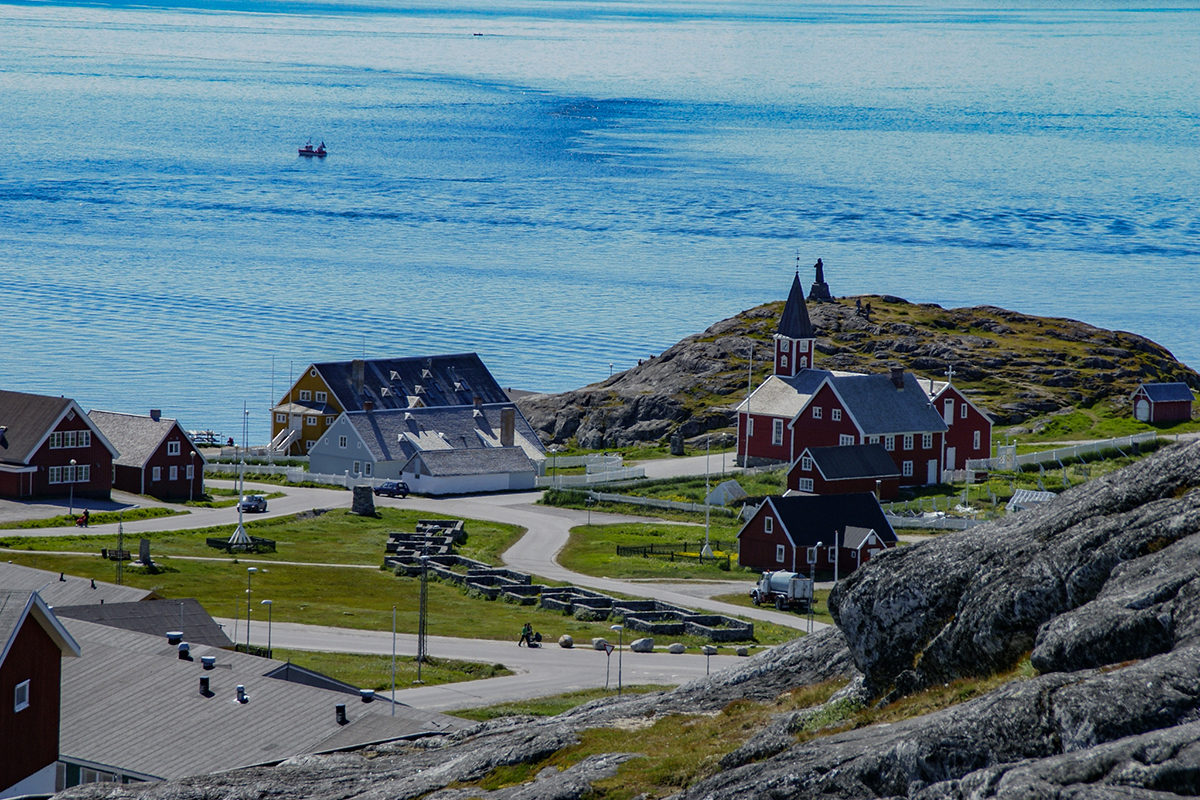 “When we travel and meet people from other places, we value them more. It’s about being there for those you can,” says native-Greenlander Nivi Christensen. Photo by Greenland Travel.

The time we spend in isolation will hopefully foster a deeper sense of appreciation for the little things we may have taken for granted before, from the places we go to the people we return to.  “I do connect with people far away, but much less than people expect,” says Nivi Christensen. “When we travel and meet people from other places, we value them more. It’s about being there for those you can.”

“Living remotely has made me better at giving value to what is close by and being in the now.”

In the meantime, finding things to appreciate in your current situation, no matter how small, may give you the extra dose of hope to help you cope; a moment spent enjoying something as simple as an afternoon walk or a new, delicious recipe can lift the spirits if you give it a try. For example, Christensen pays extra attention to the things around her home that bring her joy. “I have art everywhere at home, and a good kitchen because we love good food, and the best view.”

“Living remotely has made me better at giving value to what is close by and being in the now.”