The Ultimate Guide to Monaco for Non-Millionaires

View of Monaco from the mountains. Photo by Julien Lanoy.
City GuideAnnie Werner

Monaco. A country that could fit within the perimeter of Central Park, yet boasts the highest density of millionaires out of anywhere in the world (one in three people have a minimum seven-figure net worth). The Mediterannian principality feels like Paris meets Dubai, and with its belle epoche casinos, uber-modern apartment complexes, designer stores and souped-up supercars crowding the beachside mountains, the country can feel like a bizarre Epcot for the rich.

But the cosmopolitan country is accessible—and welcoming—to outsiders, both nationally (only about 7,000 of the country’s 38,000 residents are Monegasque citizens) and economically. You don’t have to be a millionaire to vacation like one in Monaco—and you should. The principality truly does stand up as one of the most beautiful countries in the world, and offers plenty to see, eat, drink, and do at relatively reasonable price points—you just have to know where to look.

Below, a guide to Monaco for non-millionaires in the only city that can make anybody feel like one, at least for a weekend—from cheap daytime activities to affordable, off-the-beaten-path restaurants and drinking holes; plus, which luxury experiences are actually worth the splurge. 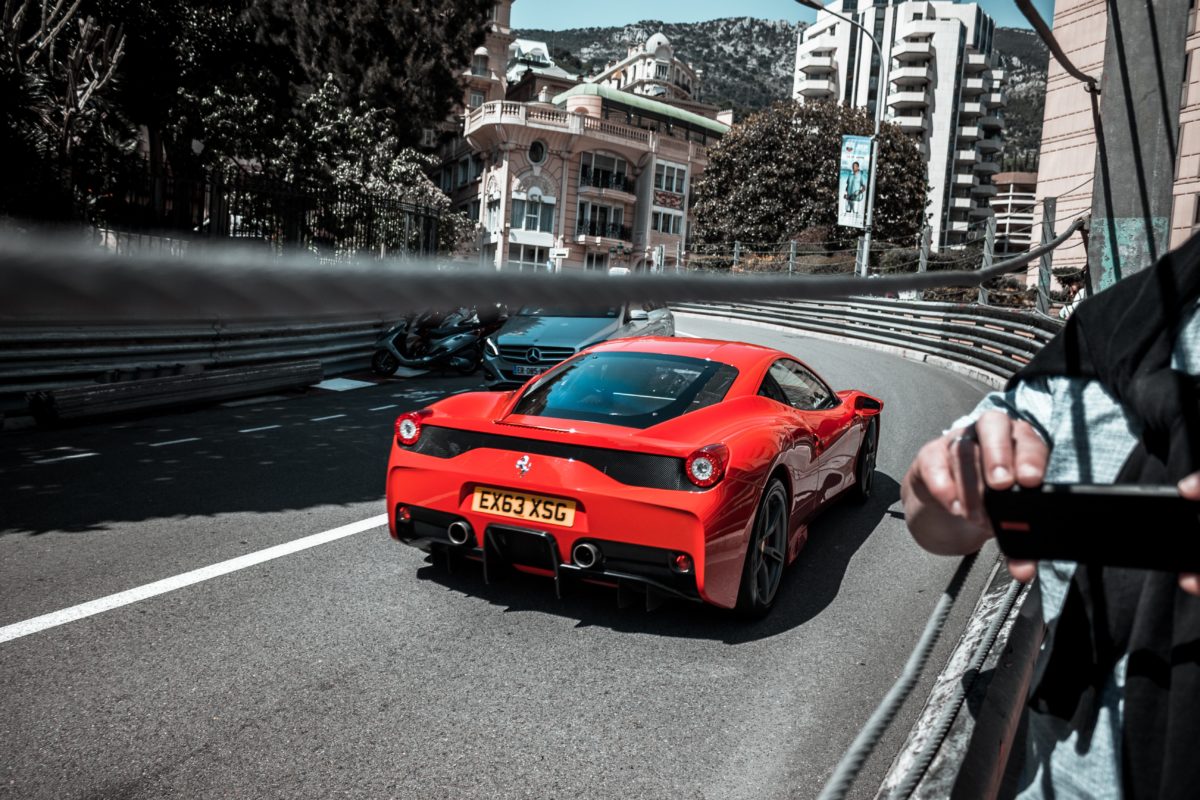 A Ferrari rounds the Fairmont Hairpin, a famously difficult part of the Grand Prix route, which is used for regular traffic during the rest of the year.

Honestly, do this, especially if you’re coming from the airport in Nice. The Monacair helicopter ride takes only seven minutes to the helipad in Monte-Carlo. It’s the same price as taking a taxi, which can lag over an hour. If you want even more rotorcraft adventures, look into day trips from Monaco to nearby islands in the Mediterranean.

Pro tip: La Compagnie, a boutique, business-class only airline, began a new seasonal route to Nice for roughly $1500 (compared to $4-5,000 business class tickets on other airlines) and they’ve partnered with Monacair to making getting in and out of the airport even more of a breeze.

One of the best ways to see the Riviera is by boat. Hiring a skipper to take you around will run you €450 for an evening ride, or you can rent your own boat for a more affordable day rate. Pack some chilled wine and cheese and don’t miss the striking view of the cliffside Musee Oceanographic.

Getting from one side of the country to the other can be done by foot—it’s that small—but the hills can be challenging, and the buses—which come in at only €2 a ride—are some of the best people watching around. Google Maps doesn’t register the routes, so you’ll need to ask a local for directions. They’ll be more than happy to help.

With roughly 16 stations across the principality, it’s easy to use the country’s free electric bike system to get around. Launched in 2015 to alleviate car congestion, the electric bikes are helpful on steep mountain roads. Use your bus pass for access—the local tourism office in Monte-Carlo can point you to the stations. 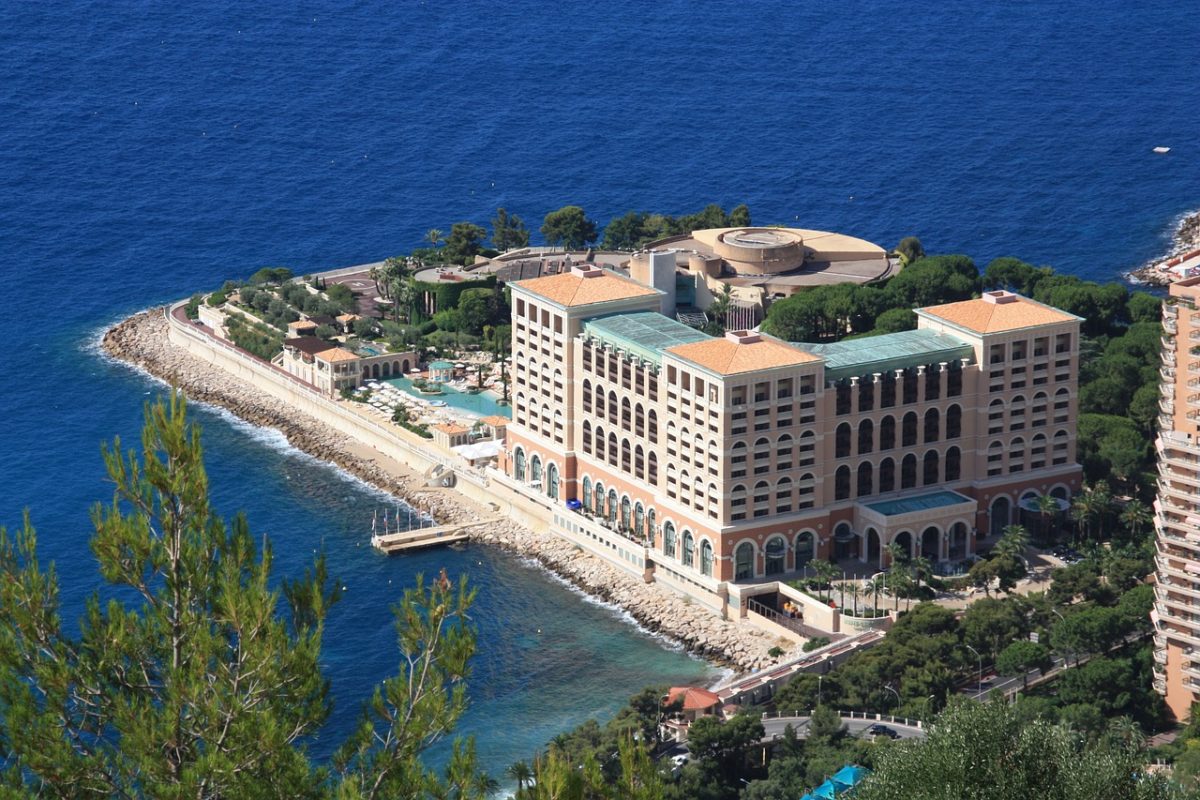 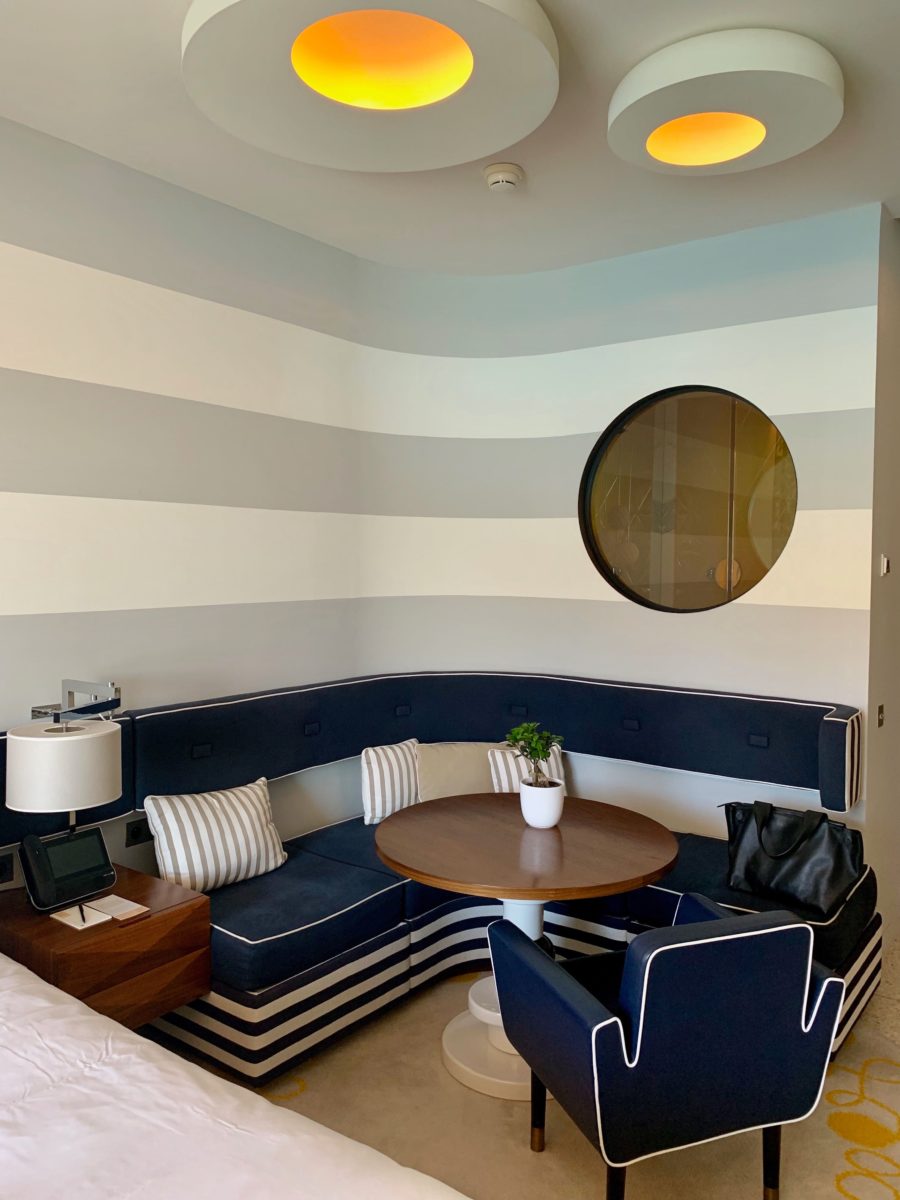 A junior suite at the Monte Carlo Bay Hotel.

There are plenty of beautiful hotels in Monaco, but if you’re looking for experience over opulence, Monte Carlo Bay Hotel is the ultimate place to stay, especially in the summer. But don’t think that means sacrificing aesthetic—the hotel is nestled right on the coast (some of the rooms open right onto the beachside deck) and the interior was designed by India Modavi with a retro-chic sailor vibe. Rates start at around $430/night in the high season.

While the ultimate place to stay in Monaco is the Hotel de Paris, their neighboring Hotel Hermitage has more affordable rates and is connected via underground tunnel with a shared spa (which you absolutely shouldn’t miss). The Beaux-Arts architecture is stunning, and if you’re going to Monaco in the winter (rates start at around $320/night) when swimming isn’t so much an option, this is an excellent option.

Of the four districts that make up Monaco, you can find super affordable home-sharing in Monte-Carlo, near the major shopping districts and casinos, or La Condamine, near the old town and other tourist attractions like the yacht club, Jardin Exotique, and more. 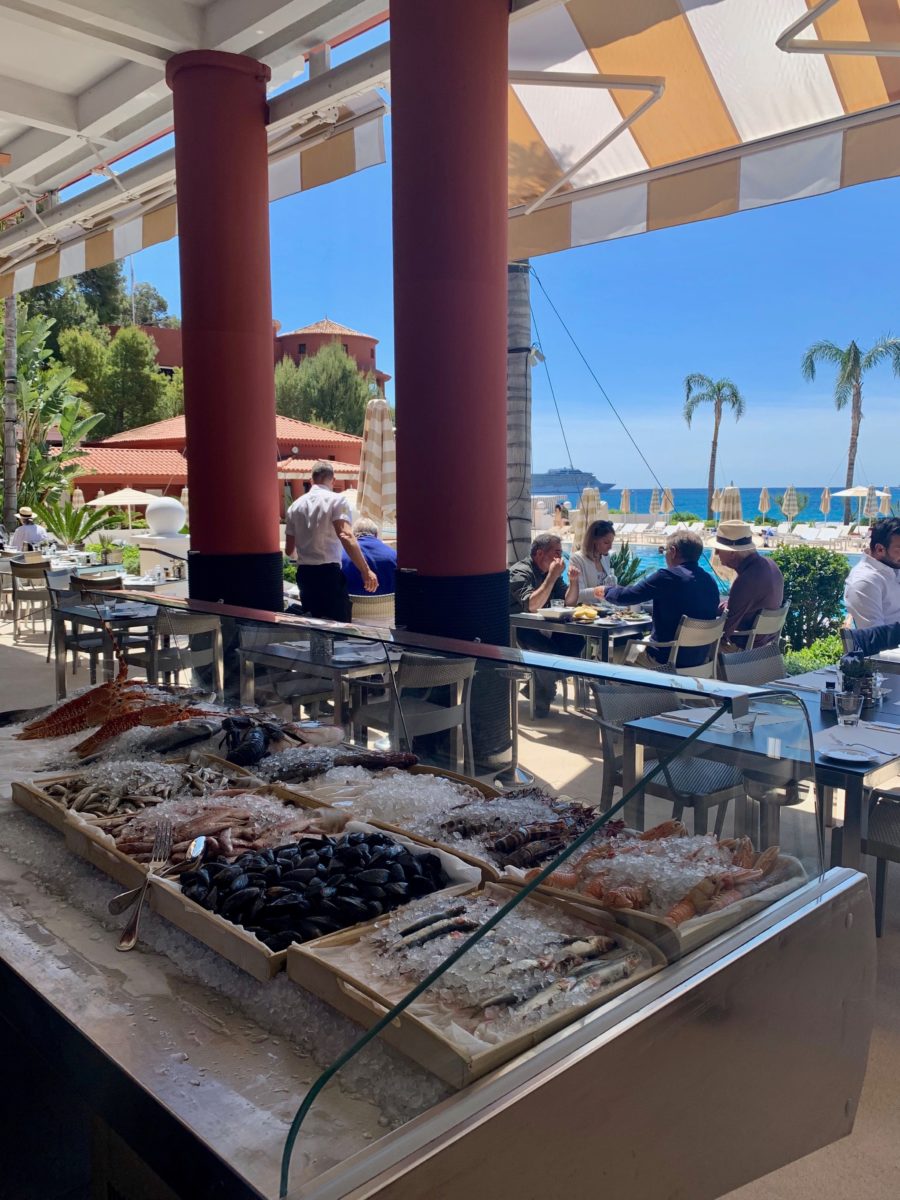 Housed in the newly constructed One Monte Carlo building in the heart of the city, Mada’One is one of the newest restaurants on the scene. The interior feels modern and lounge-y, and the eclectic cuisine from Martinique-native, Michelin-starred chef Marcel Ravin is excellent. Perfect for breakfast, lunch—you’ll spot local workers on their lunch breaks—or pre-dinner snacks and drinks.

This international, indoor-outdoor food hall was originally opened in 1880 and serves all kinds of cuisine. A favorite stall includes Le Comptoir for standard bistro fare. Find a stall with socca—the popular chickpea-flour crepe native to the region—if you’re just stopping in on the way to the nearby old town/Place du Palais. The market is also open for evening dinner, when it’s dubbed “Halle Gourmande.”

The restaurant at the Monte Carlo Bay Hotel is worth visiting in its own right, as its chef is the first-ever to receive a Michelin star using only organic produce. Go for their lunch menu and sit seaside. Order their version of barbagiuan—a Monegasque specialty pastry stuffed with spinach and ricotta.

Located inside the luxurious Hotel de Paris, Omer is the most casual of the hotel’s three restaurants—but by casual we mean Alain Ducasse-casual. The renowned chef incorporates a mix of Mediterranian cuisine with mezze representative of the entire region—from grilled octopus to lamb ravioli—and be sure to get a wine recommendation from the Somm. Sit out on the terrace if the weather is nice. Good for lunch or dinner.

Monte-Carlo is a truly international city, so it’s fitting that the new casino-adjacent restaurant (where the site’s Cabaret used to be) has some of the best sushi and fusion food around. A favorite hangout for locals and tourists alike, check out the lounge/bar before your meal and order a hookah if you feel so inclined.

There are any number of 3 Michelin-star experiences you could have in Monaco, but if you’re going to really splurge on one meal, prioritize this one-of-a-kind experience. Chef Marcel Ravin will cook at 14-course meal right in front of you in the kitchen of the Monte Carlo Bay Hotel, opening up his eclectic culinary world for a unique dining journey, coming in at an all-included price of €520 for two people.

This La Condamine eatery is the ultimate Monaco-local wateringhole—casual bistro vibes and affordable prices draw locals in weekly. The food is nothing to write home about, so come here for a well-priced drink and good people watching.

Nestled in the glamorous Hotel de Paris, drinks here are steep—but it’s an experience worth paying for. Glitzy Russian Instagram influencers make for great people watching, and the live band will play all your favorites after 10 p.m. Dress up and make sure to ask for bar snacks while you nurse that €30 martini. You can skip out after one and head to one of the more affordable bars in La Condamine.

If you want to see the famous Monte-Carlo Casino, but not lose a paycheck, opt for a drink or meal at the bar inside. Designed like a train car in homage to the old train station that used to pull right up to the casino, this classic Monaco experience will get you your fill of the high-roller vibe.

Conveniently located in Monte-Carlo proper with an expansive interior, you won’t want to miss this local favorite. They serve standard fare here (it’s billed as a pizza restaurant), but as an eatery that stays open until 6 a.m., you’ll want to come here for after-hour drinks.

This is the spot for beer-lovers in Monaco as the country’s only microbrewery. Its environment is fitting in the more casual La Condamine neighborhood. Go here for happy hour and snack on (or go for a full meal of) some of the locally-sourced food.

A no-frills bar in La Condamine favored by sports-watching locals with affordable drinks. Go here if you want to watch your favorite soccer team with fellow rowdy fans. 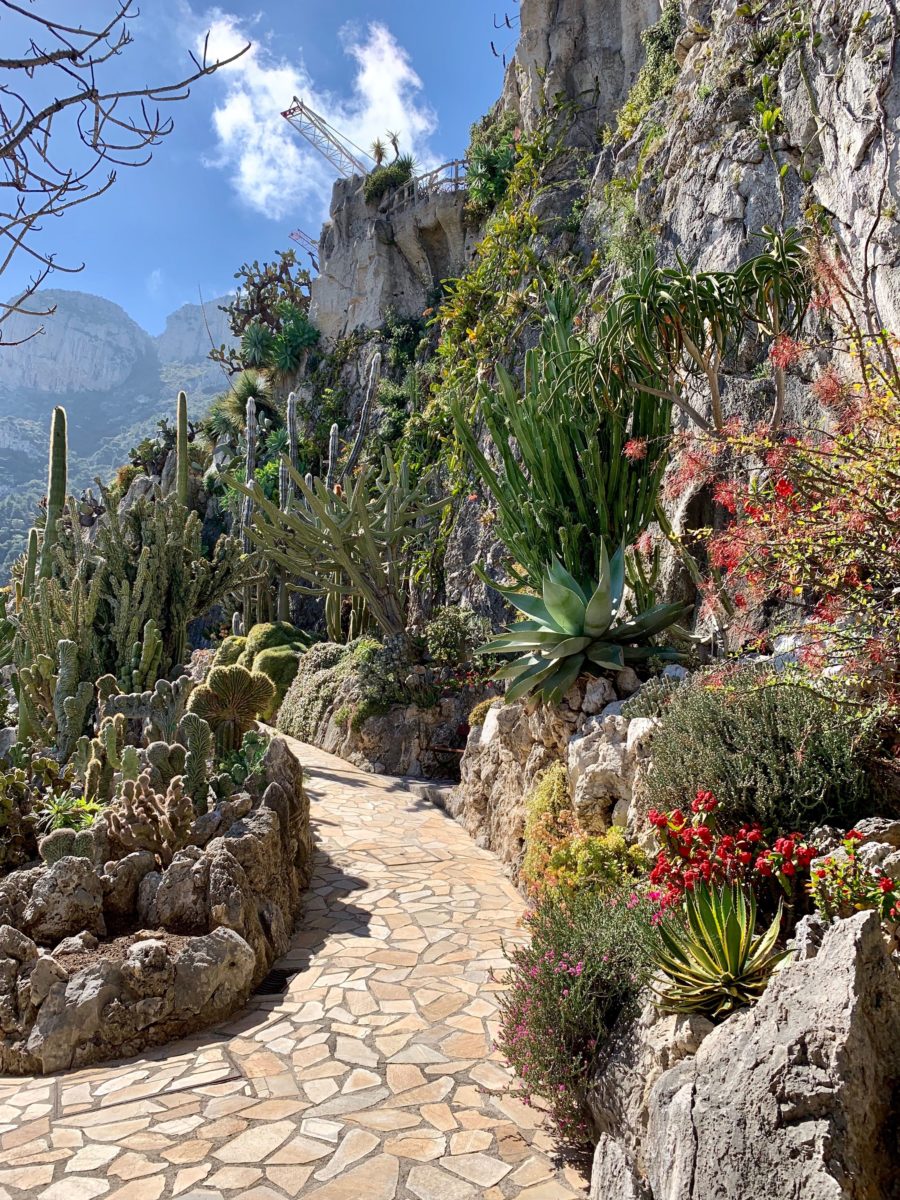 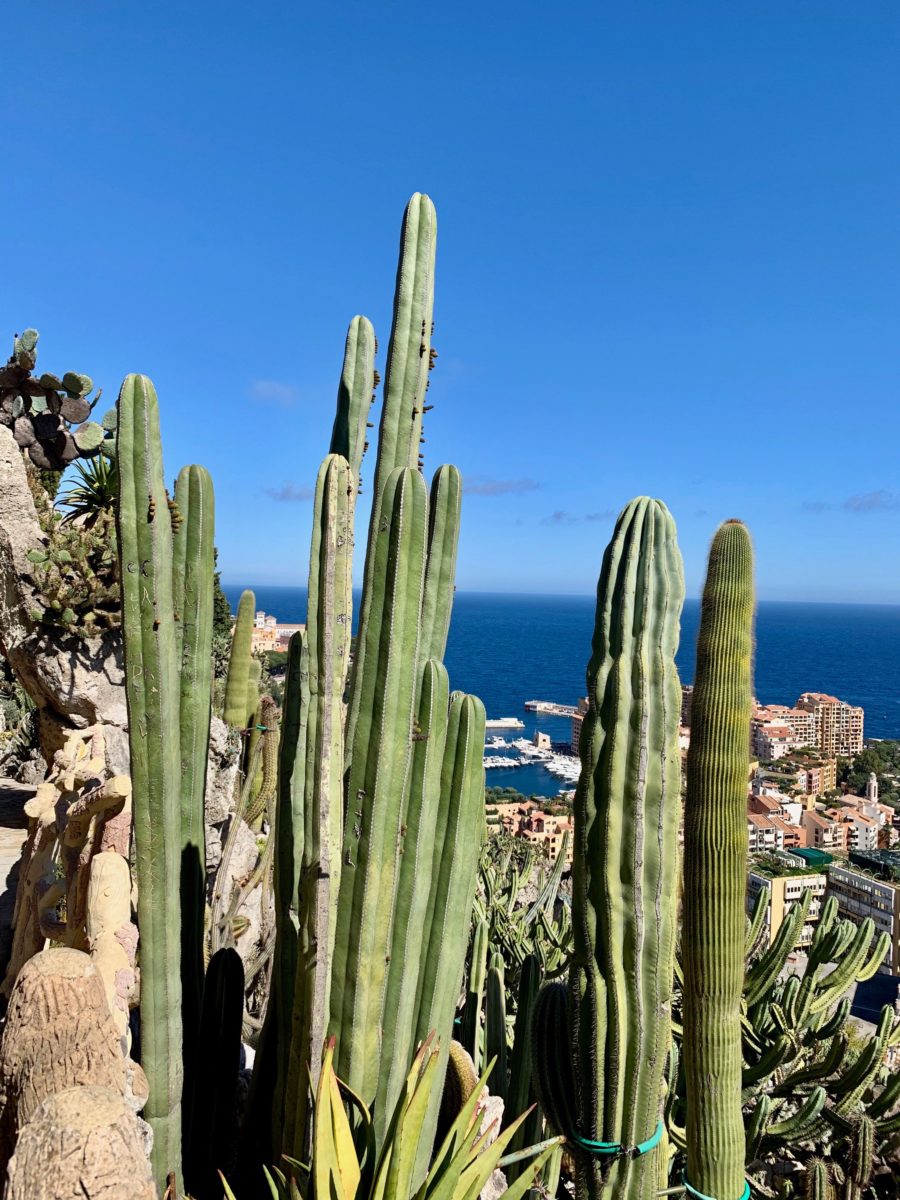 Sweeping views of the Mediterranean at the Jardin Exotique.

If you make it here, try not to look at too many photos of the gardens beforehand. You want to come around the corner and be visually shocked by the stunning view of exotic cliffside succulents overlooking the deep blue sea. The entrance fee is €6 for the best photo opp in the city. There are also underground caves to explore. You can take a bus up to the gardens and while you’re there, pop over to the neighboring Le Nouveau Musee National or the Anthropology Museum, depending on your taste, afterwards.

The country’s contemporary art museum is a must visit. With only two exhibitions per year, the site goes in-depth on some of the world’s most exciting new artists, but the size is manageable enough to not get bored or overwhelmed.

Take a stroll up to the Prince’s Palace of Monaco, which, for being built in 1191 looks strikingly well-kept. From the Place du Palais, you can clearly see three countries at once—France, Monaco, and Italy. From there, wander around the elevated old town, complete with quaint narrow streets, food vendors, historic sites, and the seaside St. Martin’s Garden.

If you’re strolling the Old Town, make sure to mosey over to the Oceanographic Museum of Monaco, which was a pet project of Prince Albert I (inaugurated in 1910) and where the great naval explorer Jacques-Yves Cousteau was director for many years. Don’t miss the perennial Oceamania exhibit of rare marine objects. Adult tickets run between €11-€16 depending on the season.

On the east end of Monaco, this sandy man-made beach is clean and wide enough to fit public beach crowds, though they likely won’t be big. If you’re not looking to spend €200/day for a cabana at the Beach Club, Larvotto will do the trick, but there’s also nearby Plage Marquet Beach in Cap d’Ail near the Monaco border, which is a little livelier. 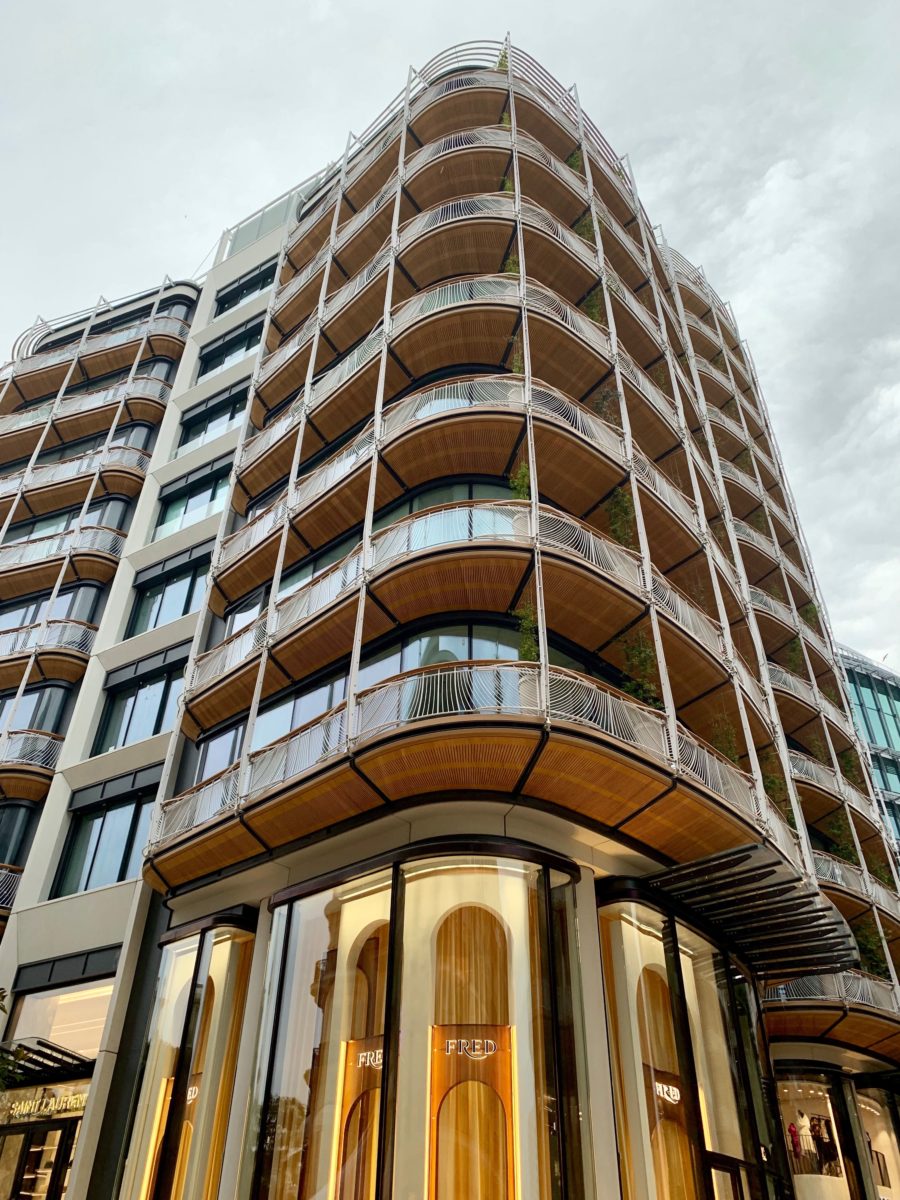 There’s something for everyone at this luxury design store that’s worth visiting even if you’re only window shopping, from art, tech, fashion, travel accessories, and more. Located right near the Hotel de Paris and Casino de Monte-Carlo, it’s a more eclectic mix than the rest of the nearby designer outposts including Prada, Fendi, etc.

You better believe the consignment shopping in Monaco is top-notch. The previously-owned designer clothing comes straight from the chic Monegasque high society—we saw five year olds running around in Balenciaga sock sneakers—so if you’re looking for an extra special wardrobe for future weddings, galas, or unique street-style, this is definitely worth a stop.

An independently-owned, English-language bookshop to find a leisurely beach read. Book-lovers may also want to peruse to the nearby Princess Grace Irish Library for some rare and special collections.