How to Spend a Long Weekend in Tel Aviv, Israel

Looking out across Tel Aviv from the pool at the Norman Hotel. Photo by Sivan Askayo.
City GuideDana Kessler

Located on the Mediterranean Sea, Tel Aviv is the perfect location for round-the-clock fun. One of the world’s cities most frequently dubbed a City That Never Sleeps, Israel’s coastal metropolis is a true 24-hour town.

You can lounge on the beach, shop, sample local street food, explore the Old City of Jaffa, visit art museums, laze in trendy cafes, and finish everything off with dinner at one of the city’s endless restaurants before getting ready to go out at night. Whether you’re the clubbing type or you prefer live music at an intimate cocktail bar, you probably won’t return to your hotel before sunrise.

Pro tip: Some attractions are closed on the weekend for Shabbat, which comprises late Friday and all day Saturday, and some museums are closed on Sundays, so be sure to check opening hours before visiting anywhere. 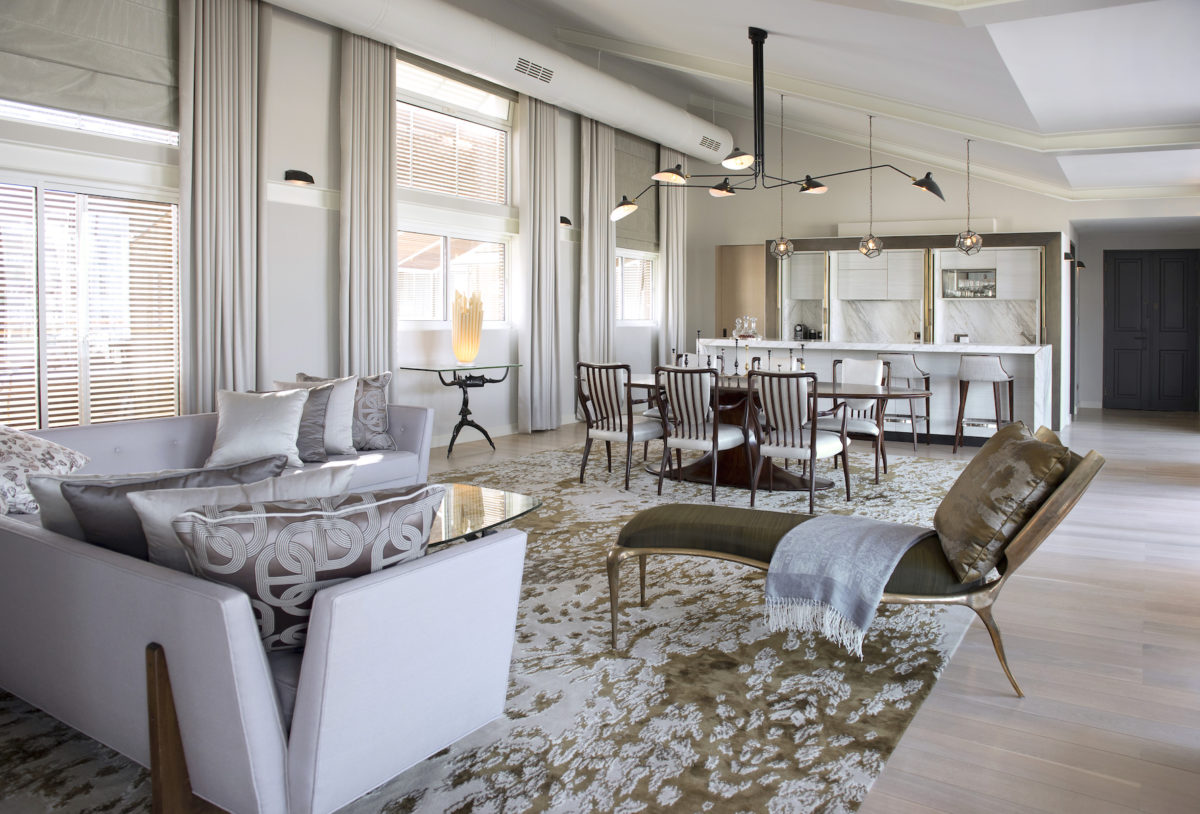 The Norman is Tel Aviv's most high-end boutique hotel. Photo by Sivan Askayo. 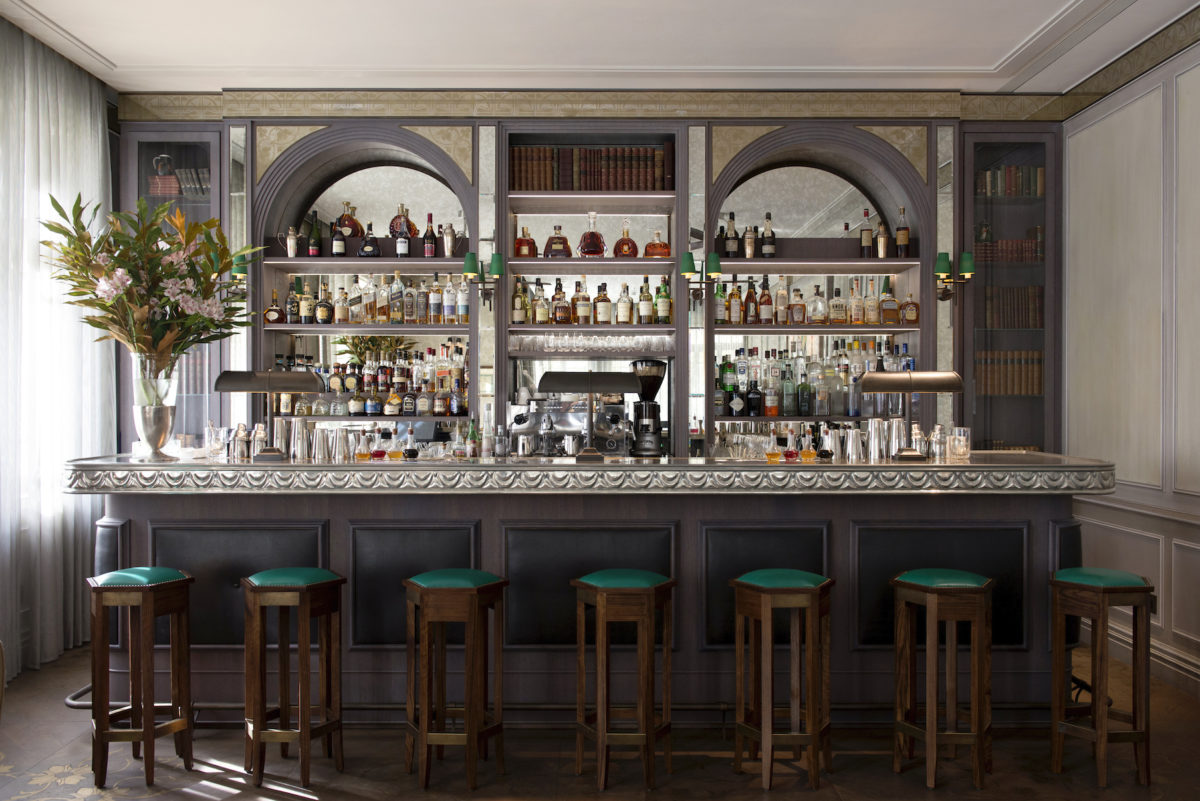 Where to Stay in Tel Aviv

Probably the most high-end and luxurious of all of Tel Aviv’s boutique hotels is The Norman. Comprised of two meticulously renovated historical buildings in the heart of Tel Aviv, the hotel dazzles with interior design influenced by the elegance of the 1920s, an impressive art collection, and top of the line suites.

The Norman offers not only upscale dining, a beautiful infinity pool, and various wellness options, but arts and culture offerings as well, including a unique series of cultural events like discussions, performances, and film and video art screenings.

This 45-room boutique hotel, tucked away in a beautiful yellow building with green windows, was originally built in the early 20th century and has been historically preserved. It boasts a relaxing rooftop terrace, spa treatments, and a prime location on Tel Aviv’s busy Shenkin Street, which is full of boutiques and within walking distance from the Carmel Market, the beach, several night spots—and virtually everything else you’d want to see. To make things even easier, the hotel offers its guests complimentary use of their bicycles.

One of Tel Aviv’s most well-established little hotels is the intimately stylish 12-room Hotel Montefiore, built in 1922 in the Eclectic style. The hotel’s pièce de résistance is undoubtedly its award-winning restaurant and bar, which is no less popular with chic locals than it is with tourists. It offers French cuisine with a Vietnamese twist and is well-known for its classy brunch.

The amazingly located Cinema Hotel is right next to Dizengoff Center, Tel Aviv’s most central shopping mall, and overlooks the newly renovated Dizengoff Square, which is the perfect place to sit and have ice cream. There aren’t many themed hotels in Tel Aviv, but this one is dedicated to–you guessed it–the movies. The beautiful Bauhaus building the hotel is housed in used to be one of Tel Aviv’s first movie theaters, Esther Cinema.

Today, it is a hotel decorated with film memorabilia, but you can still catch a movie in the opposite Rav Hen Dizengoff movie complex or at Dizengoff Center. In Israel, they don’t dub movies into Hebrew unless they’re for kids, so no worries about plots getting lost in translation. 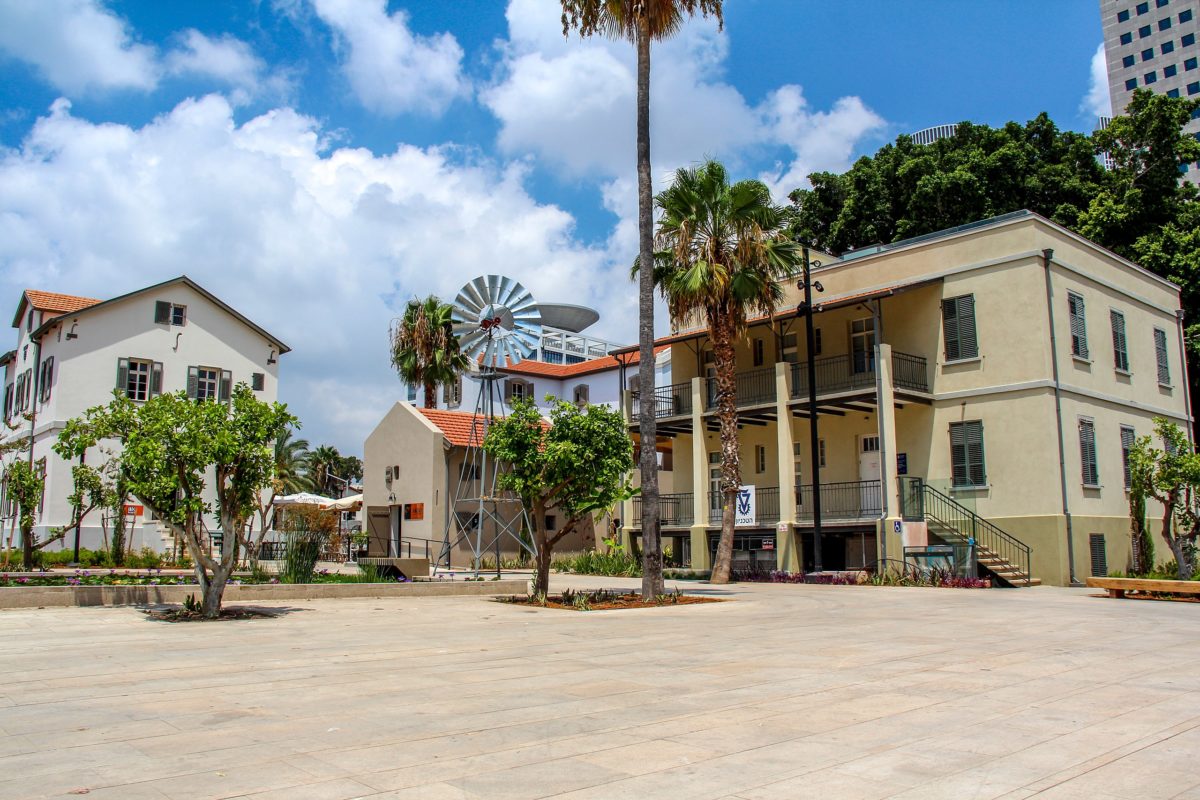 At Sarona Market, find tasty meals made with ingredients imported from every corner of Israel. 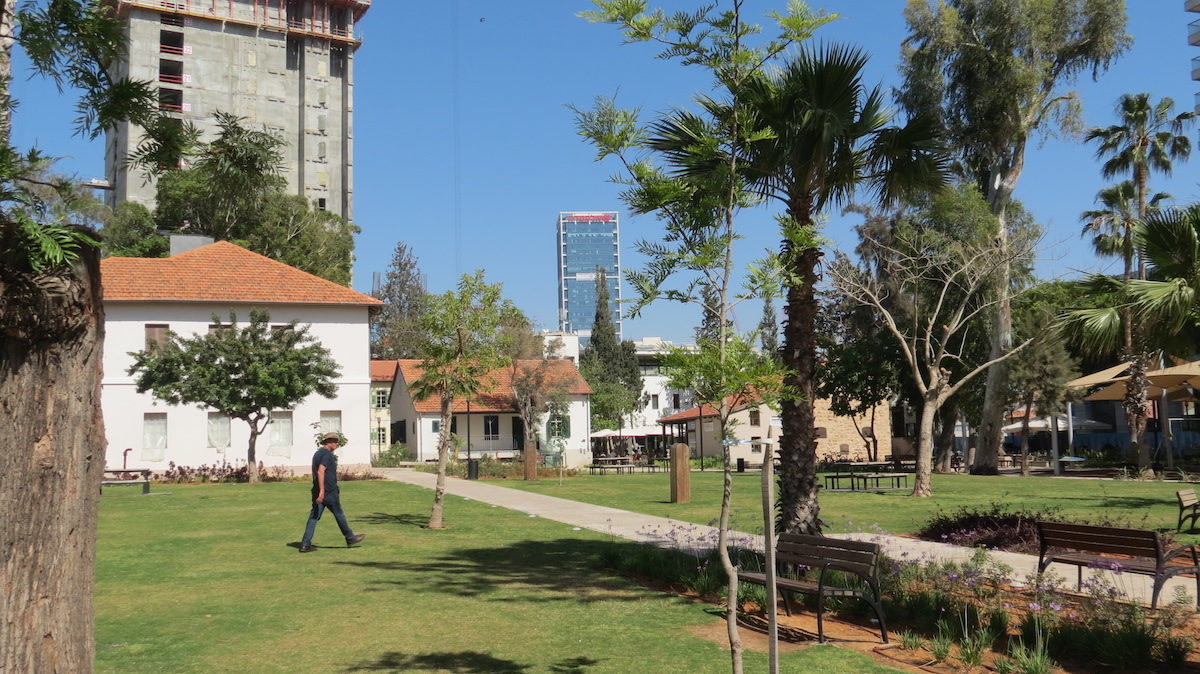 Grab a bite and relax outside in the Sarona complex.

Where to Eat in Tel Aviv

Hummus may not be originally Israeli–it is imported from its Arab neighbors–but it is the local street food that Israelis feel strongest about and spend hours debating. If you ask us which is the best hummus spot in the city (or indeed the country), we would say Abu Hassan in Jaffa, hands down. Founded by Ali Karawan (aka Abu Hassan), there are a few branches in Jaffa, the southernmost and oldest part of the Tel Aviv-Yafo municipality.

The joint is small, crowded, noisy, and as authentic as they get. When it’s packed (pretty much all the time) you get seated with strangers at the same table, and since there are always people waiting in line, you’re expected to finish your food quickly and get out. It’s cheap, vegan-friendly, highly atmospheric, and delicious.

Traditionally, hummus is a breakfast food, so Ali Karavan is open weekdays from the early morning until the hummus runs out, which usually happens in the early afternoon.

Devoted foodies must visit Sarona Market, Israel’s largest indoor culinary market. While the Carmel Market is old-school and mostly authentic, Sarona is urban and contemporary. It combines gourmet imported goods with local produce from all over the country. You can shop for food, eat at one of the restaurants or stalls, or have a picnic right outside. The market is part of the Sarona complex, the city’s restored German Templar Colony, which is also worth a visit.

One of Tel Aviv’s trendiest restaurants is Santa Katarina, located in a complex full of other trendy restaurants like Shishko and Port Said (also worth checking out) behind The Great Synagogue. Named after Saint Catherine’s Monastery on the Sinai Peninsula in Egypt, Santa Katarina is a casual restaurant offering modern Israeli cuisine influenced by Syrian, Lebanese, and Palestinian palates. With a Middle Eastern tabun oven as its centerpiece and a great wine menu, Santa Katarina is helmed by chef Tomer Agay, who emerged under the tutelage of local celebrity chef Haim Cohen.

[Check out five essential street foods to try in Tel Aviv—and where to eat them.] 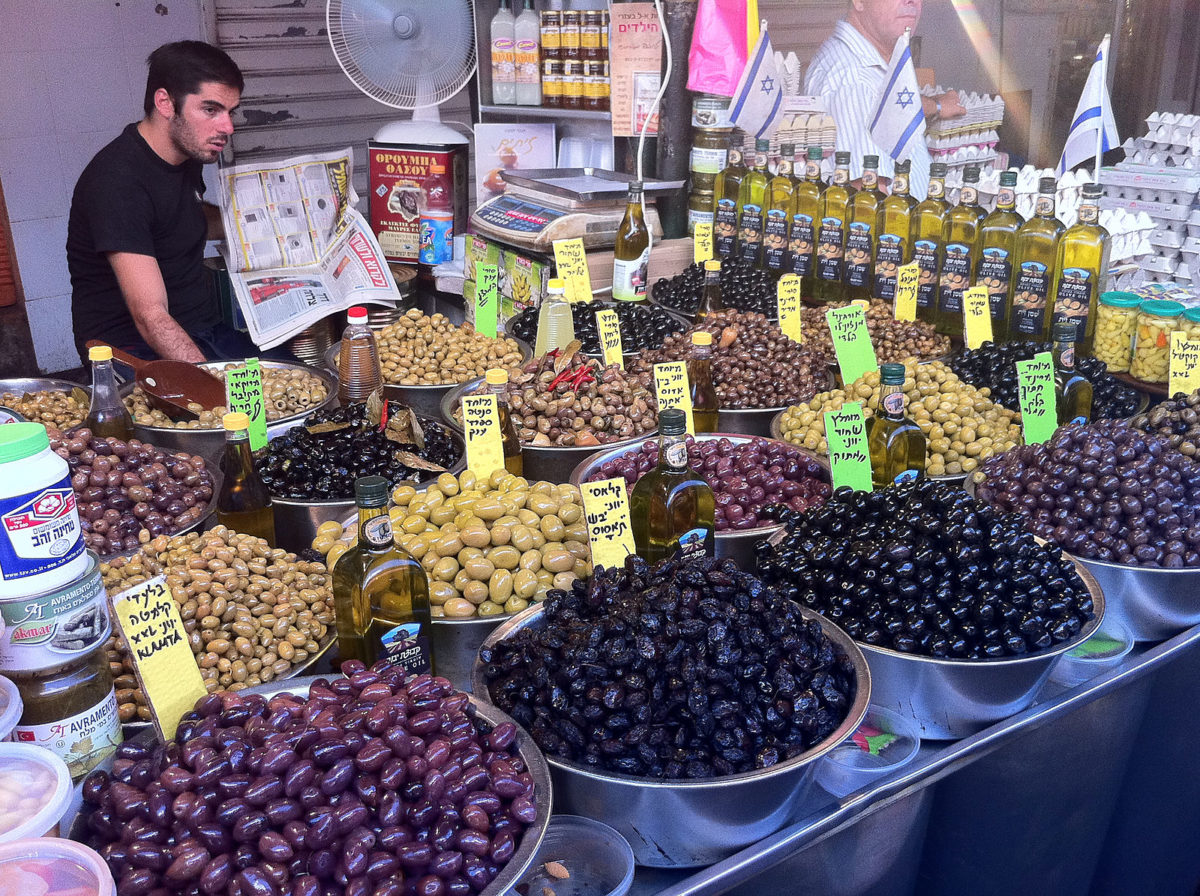 The Carmel Market is the stop to make for local and traditional Israeli goods.

Kerem HaTeimanim and the Carmel Market

Kerem HaTeimanim, literally meaning “vineyard of the Yemenites,” is a neighborhood in Tel Aviv established in 1906 by Yemenite-Jewish immigrants. It is located right next to the Carmel Market, and on weekdays from morning until early afternoon, both are heaven for foodies.

You can fill your shopping bag with edible goodies from the market–cheeses, exotic fruit, spices, or blocks of halva, for instance–and you’ll have trouble deciding where to sit down for lunch or a snack, as the possibilities are endless. Whether you’re in the mood for Turkish börek pastries, fresh pomegranate juice, falafel, hummus, hamburgers, Thai food, or authentic Yemenite cuisine–this area has it all.

It is a well-known fact that Tel Aviv has an abundance of vegan-friendly street food options, but it also offers vegetarian and vegan fine dining. Experience this for yourself at Meshek Barzilay–an organic vegetarian restaurant and delicatessen in Tel Aviv’s beautiful and trendy Neve Tzedek neighborhood (which in itself is well worth a visit for its boutiques, restaurants, and bars). 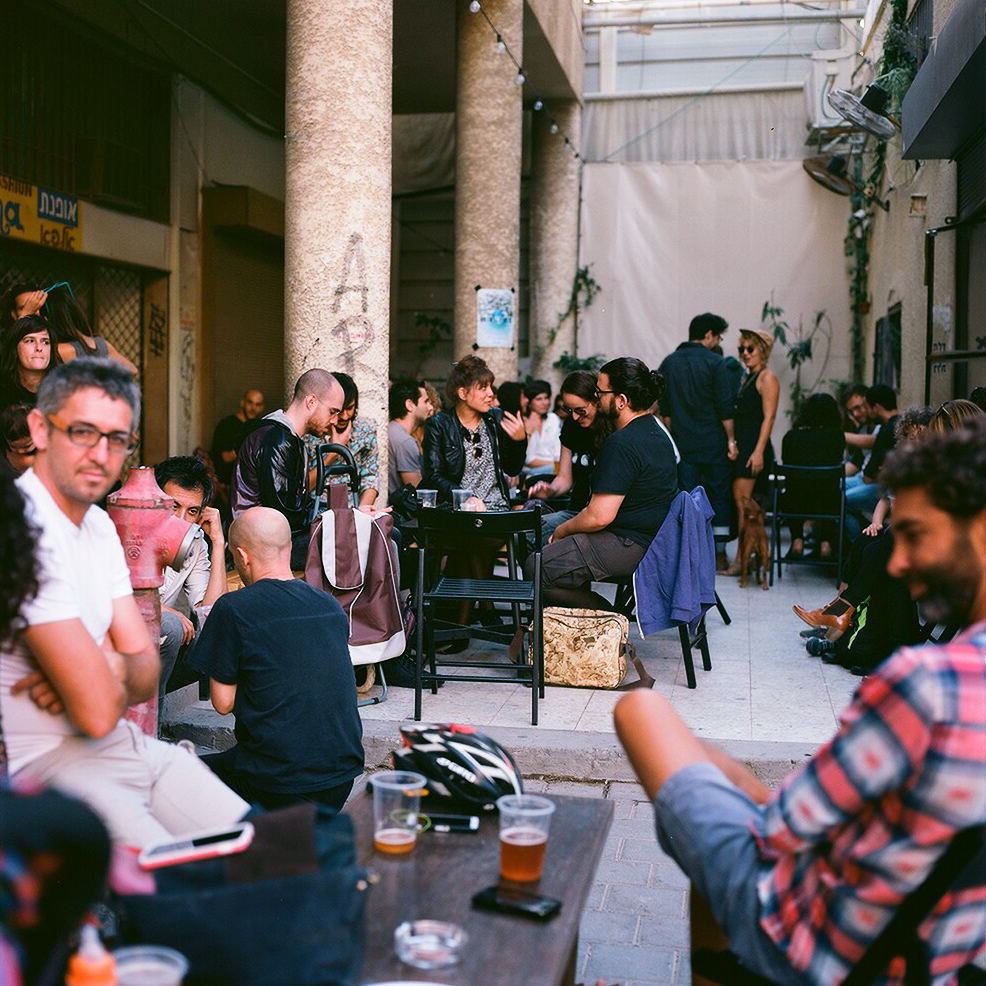 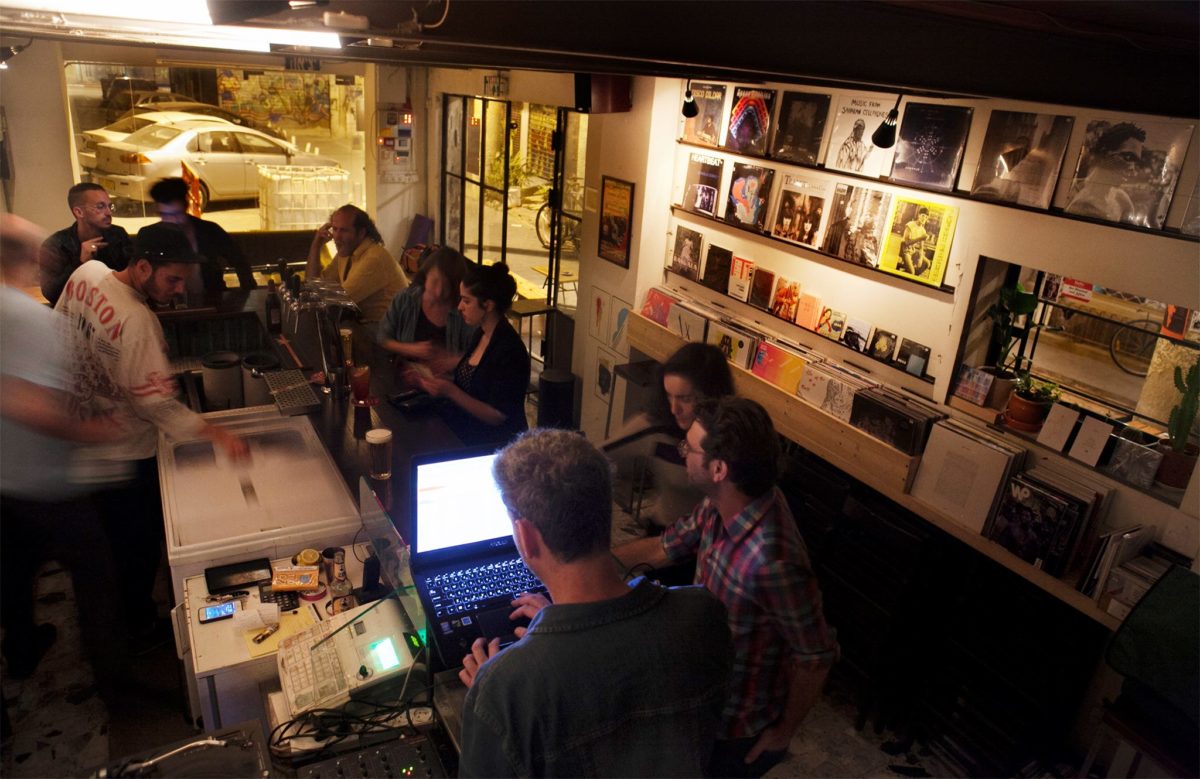 Music lovers should pop into Uganda for cheap drinks and good tunes.

Where to Drink in Tel Aviv

Real Tel Avivis drink at Haminzar (literally translating to “the monastery”). Everybody drinks and eats there: young hipsters, old alcoholics, dreadlocked travelers, and everyone in between. This is not the kind of place you go for the décor or the fashion: It’s a no-nonsense institution.

Haminzar opened in the early 1990s and feels like its been there forever (a local news website once claimed it was closing down and sent the entire city into a panic until they revealed it was an April Fool’s hoax). Haminzar serves great food from an ever-changing menu and alcohol at sensible prices. Conveniently located near the mouth of the Carmel Market and open 24/7, this is the most reliable gastro-pub in the city.

If it’s a fancy cocktail you’re after, there are a few  hidden in the city but the first on the list should be this gem located inside the Imperial Hotel, a few steps from the beach (and there’s nothing like a night stroll on the sand, shoes in hand, after one drink too many). The bartenders are seasoned pros, the cocktails come with a wow factor, the décor is colonial, and the food is Asian-colonial inspired to match. The place is small, so make sure to make a reservation, especially if you want to visit during happy hour.

The Teder is not just a place—it’s a lifestyle. It’s actually a large complex in the south of Tel Aviv where there’s always something to do. It’s a place to drink but also to eat celebrity chef Eyal Shani’s creations (either his pizza at the downstairs bar or a sit-down menu at his upstairs Romano restaurant), as well as to see live shows, dance, buy records, and more.

Teder hosts art shows, bands, and DJs, has its own internet radio station, and is full of happy go lucky hipsters. Saturday afternoon/evening is usually the most exciting time to go, with chances to come across a surprising special event.

Next door to the Teder you’ll find much more low-key Uganda. This tiny bar is the perfect refuge for musicians and music lovers. With a distinct Berlin-like atmosphere, good DJs, cheap beer, and a little record shop inside, Uganda is Tel Aviv’s hideaway for those in the know. It’s worth noting that the bar is open on Saturdays during the day for lunchtime hummus and beer. 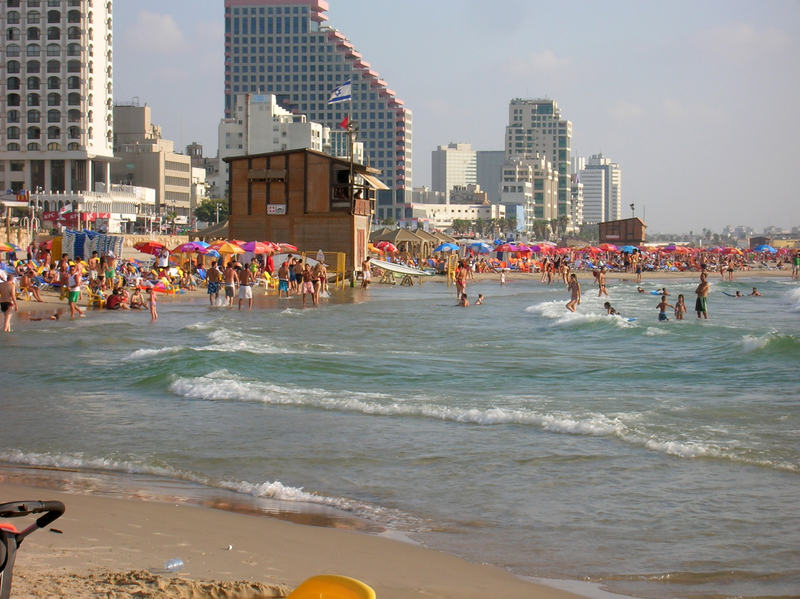 Take a stroll along the promenade and go for a swim in Jaffa. 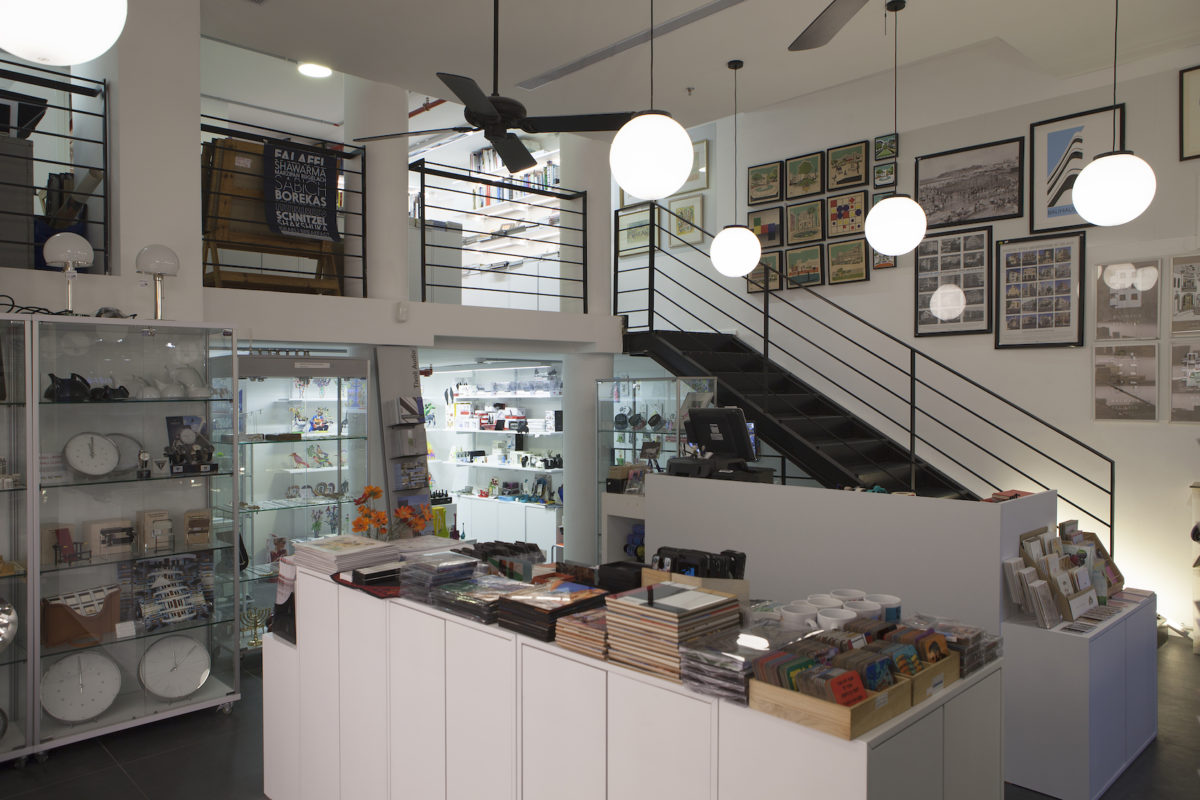 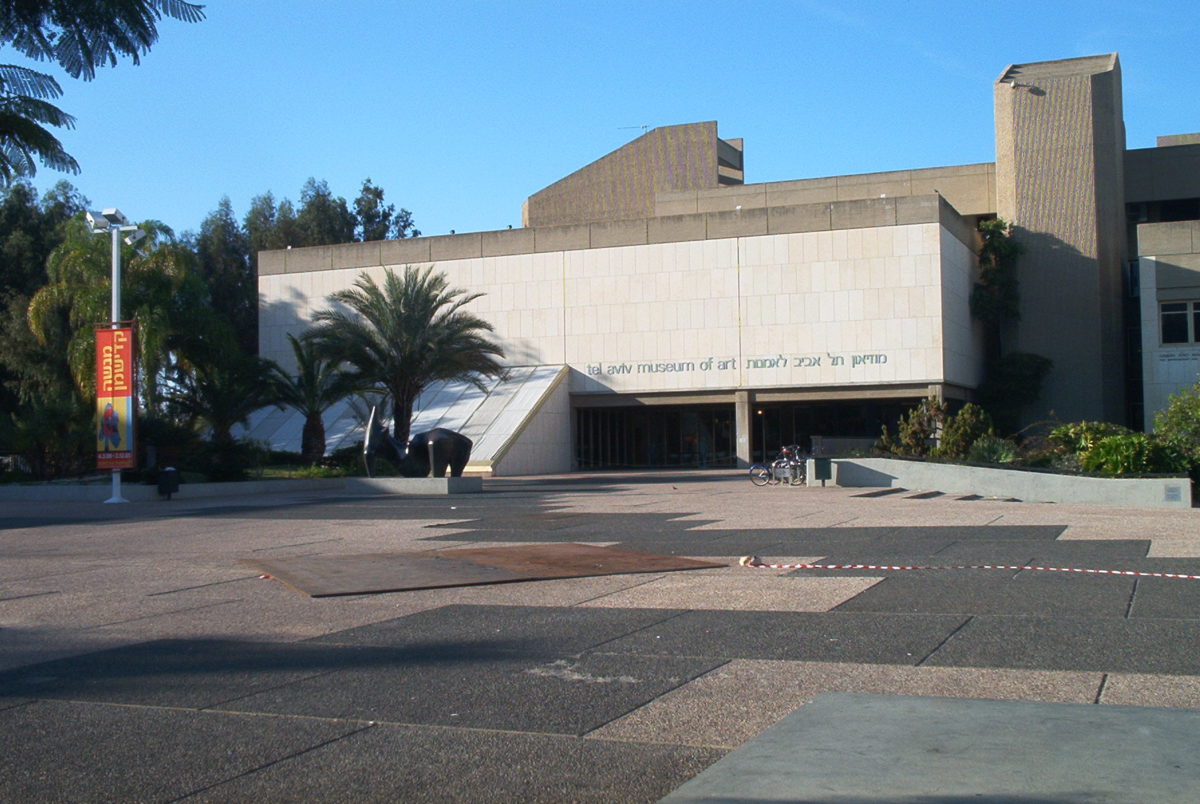 Outside the Tel Aviv Museum of Art, designed by architect Preston Scott Cohen.

What to Do in Tel Aviv

Have a Day at the Beach

Pack your bikini and sunscreen: If you’re visiting Tel Aviv, you’re headed to the beach! Israeli weather is hot for most of the year, and you can pretty much hit the beach anytime from April to October. Even when its cooler, you can still jog on the renovated promenade. Choose one of the many beaches with a nearby cafe/bar—there’s nothing like sipping on a frozen margarita with your feet buried in the sand.

In 2003, UNESCO proclaimed Tel Aviv’s White City a World Cultural Heritage site, regardings its 4,000 buildings built in the International architectural style from the 1930s with a distinct Bauhaus component a historic landmark.

Tel Aviv has the largest number of buildings in the Bauhaus/International Style of any city in the world. The city’s small Bauhaus Museum and Bauhaus Center are great places to start exploring. Whether you take a guided tour or do it yourself using a map or an audio guide (both available at the Bauhaus Center), Tel Aviv’s White City is a must-see.

For art connoisseurs, the Tel Aviv Museum of Art offers everything from the Old Masters Department, with art from the 16th to the 19th centuries, to modern and contemporary art from Israel and around the world. The museum is worth a visit just for its impressive, recently-updated architecture, designed by Preston Scott Cohen and unveiled in 2011.