You can find some of the best bourekas in Israel at Tel Aviv's Carmel Market.
IndexDana Kessler

A comprehensive guide to Tel Aviv’s street food scene, including what to eat and where to eat it.

Israelis are temperamental: colorful and loud, never ones to hold back (and sometimes a handful!). Israeli street food is exactly the same: bursting with color, always dripping and oozing. There’s no polite way to eat it. Israeli street food is something you devour quickly and lustily. You cannot consume it without getting your hands greasy and your shirt dirty, but believe us–it’s worth it.

Tel Aviv may not be the first city you think of when you think of cities with great street food, like Mexico City or Bangkok, and while the most populous city in Isreal certainly offers plenty of fine dining, for lunch these five street foods are the way to go. 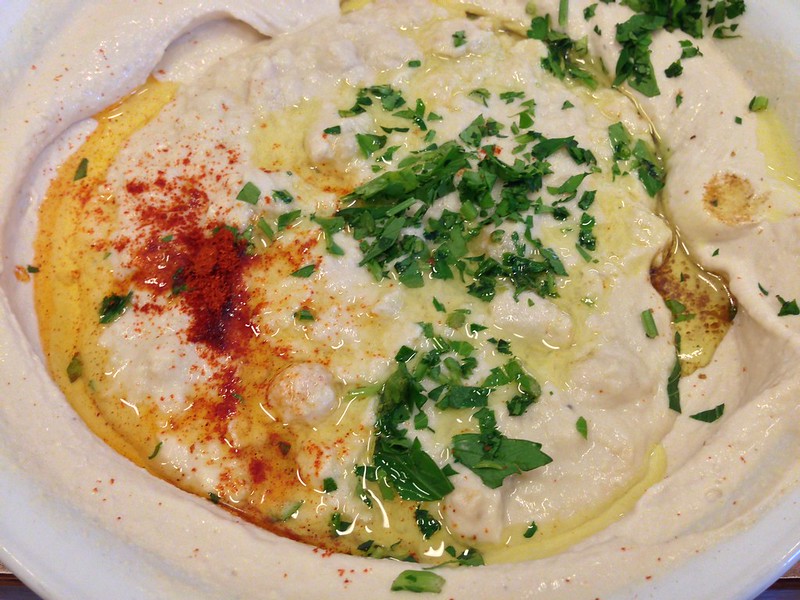 Although considered a snack dip in the west, in Israel hummus is actually served for breakfast and lunch. Photo by Cyclone Bill.

You can’t visit Israel without eating hummus. Contrary to popular misconceptions outside the Middle East, hummus is not a dip–it is a meal in its own right, served for breakfast or lunch. Hummus is tasty, cheap, healthy and, of course, vegan. The best place to have it is in a hummusia, meaning a hummus eatery. These places are small, simple, and basic with quick service and usually serve a few variations on hummus. For instance, hummus with ful (fava beans) on top and a hard-boiled egg or msabbaha (cooked chickpeas with tahini), as well as greens.

Tel Aviv and Jaffa are full of hummus places to choose from. Mashawsha on Pinsker Street, Yanas on Frishman Street (near Rabin Square), Kaspi (which has a few branches throughout the city),  Abu Dubi on King George Street (the place for for reggae  and dub lovers), Garger HaZahav on Levinski Street, various hummusiot in the Yemenite Quarter and in Jaffa (Abu Hassan is the best) are just a handful to choose from, depending on where in the city your hummus craving hits. 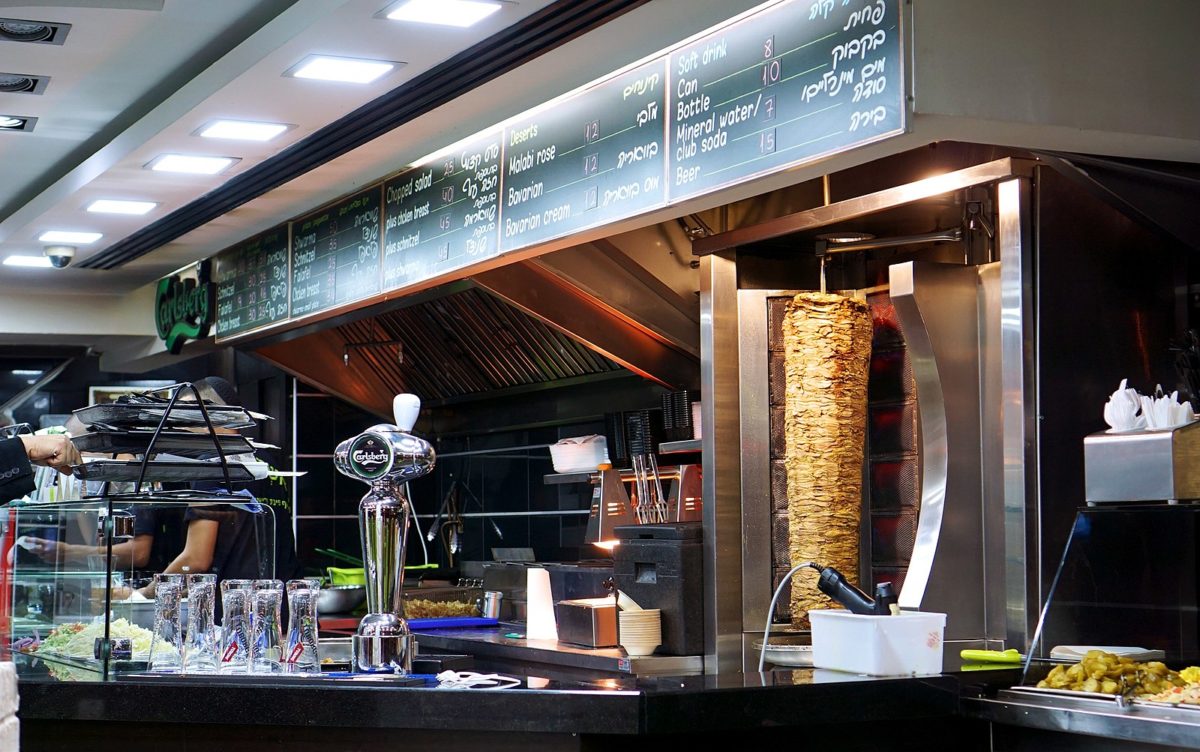 For a quick and tasty meal, shawarma stands can be found throughout Tel Aviv.

The Turkish have the Doner kebab; the Greeks have their gyro. The Israeli version of meat cooked on a vertical rotisserie and served in a pita is the shawarma. Traditionally it is made of lamb’s meat, but nowadays it’s usually turkey or veal stuffed inside the pita with salad, pickles,  (sometimes) French fries, and topped with hot sauce, tahini, and Amba (a delicious yellow mango pickle sauce, which stains your clothes and makes your sweat smell bad for days).

Big busy central streets are full of shawarma stands. Dabush on Ibn Gvirol Street, Yashka on Dizengoff and Turk Lahmajoun on Nahalat Binyamin are just some of the places to sample it. You should also try the upscale and much more expensive version of meat in a pita (be it minute steak or chicken liver) at one of the branches of celebrity chef Eyal Shani’s gourmet pita stands, Miznon. 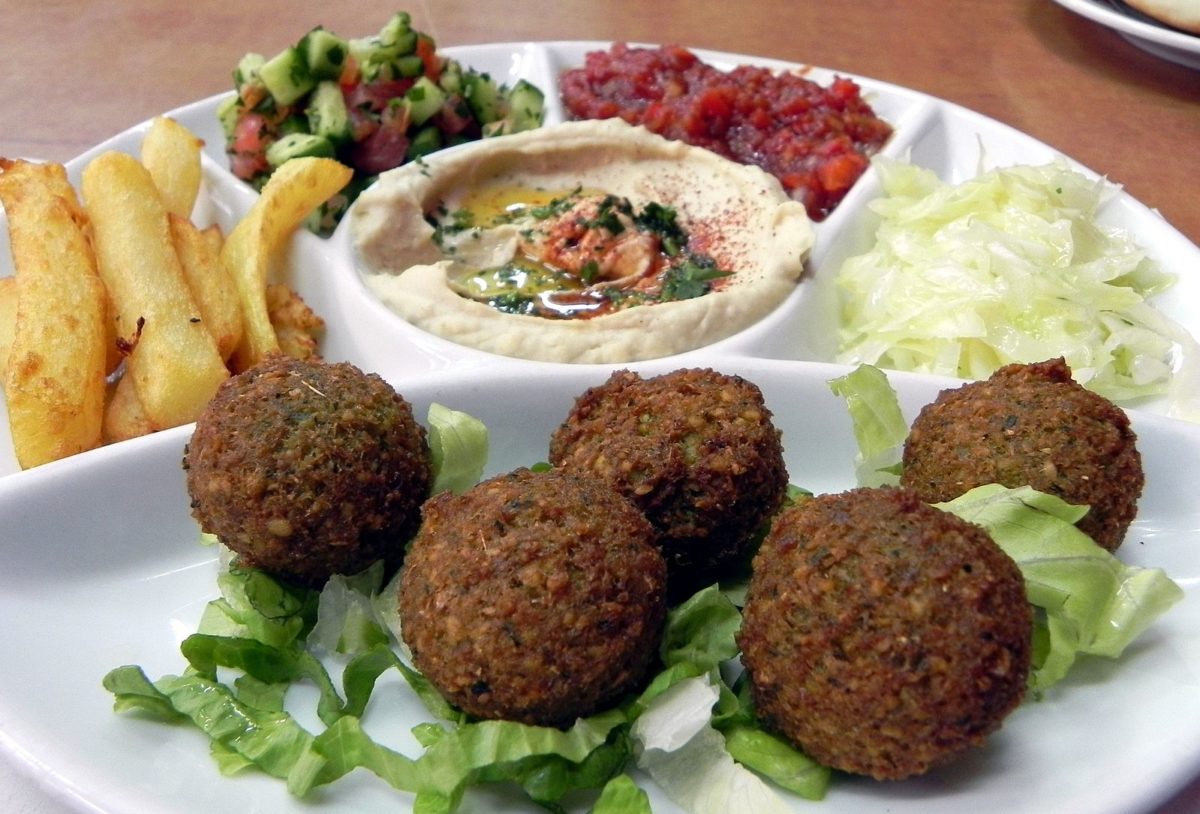 Falafel is the ideal street food for visiting vegetarians and vegans. 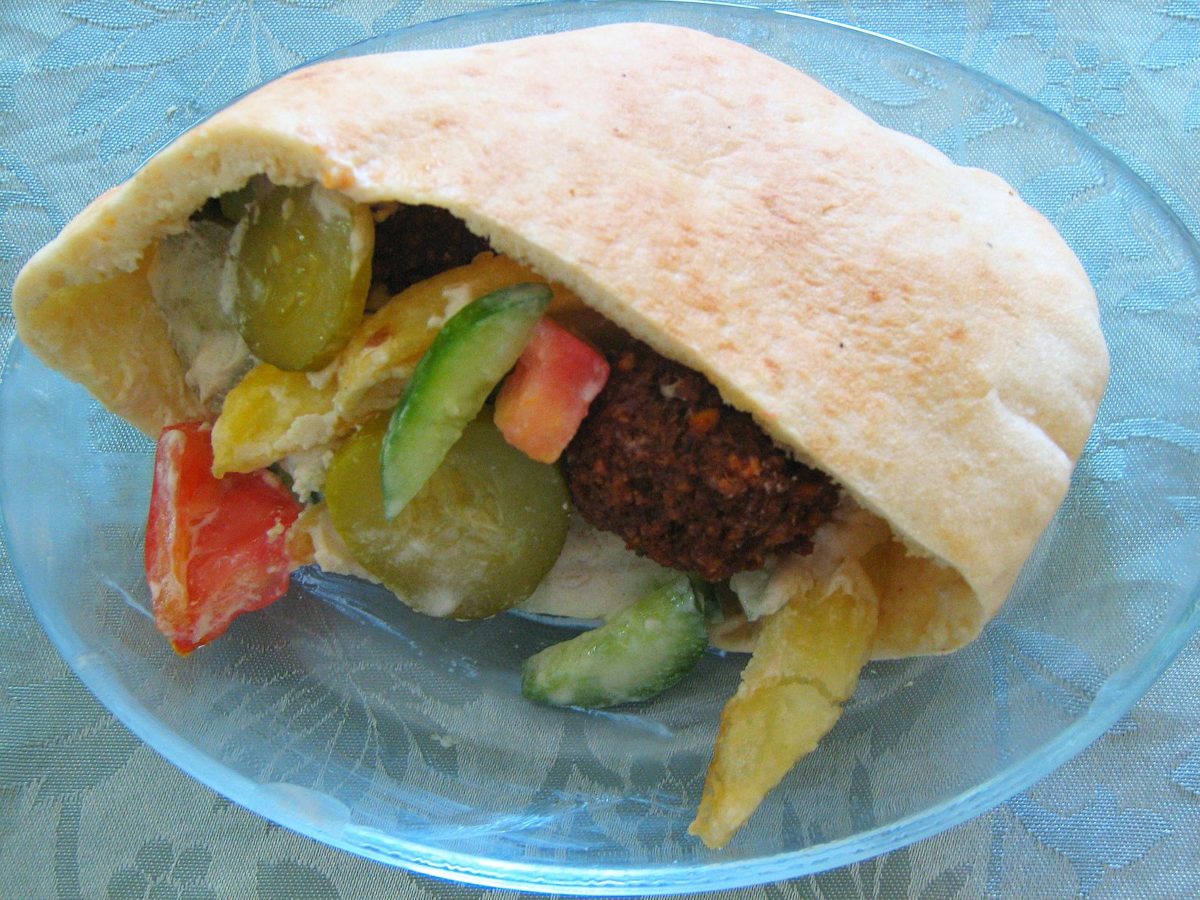 Try falafel stuffed inside a pita with greens, tahini, and other sauces.

The perfect Israeli street food for vegetarians and vegans is falafel: deep-fried balls made of chickpeas served in a pita with sides similar to those in the above-mentioned shawarma. Since Tel Aviv has a large vegan population, falafel can be found in abundance.

Hakosem on the corner of Shlomo HaMelekh and King George has some of the best falafel in the city (as well as great shawarma and sabich). Dr. Saadya on King George, Falafel Johnny on Tchernikhovski and Gabay on Bograshov Street, are also worth trying. 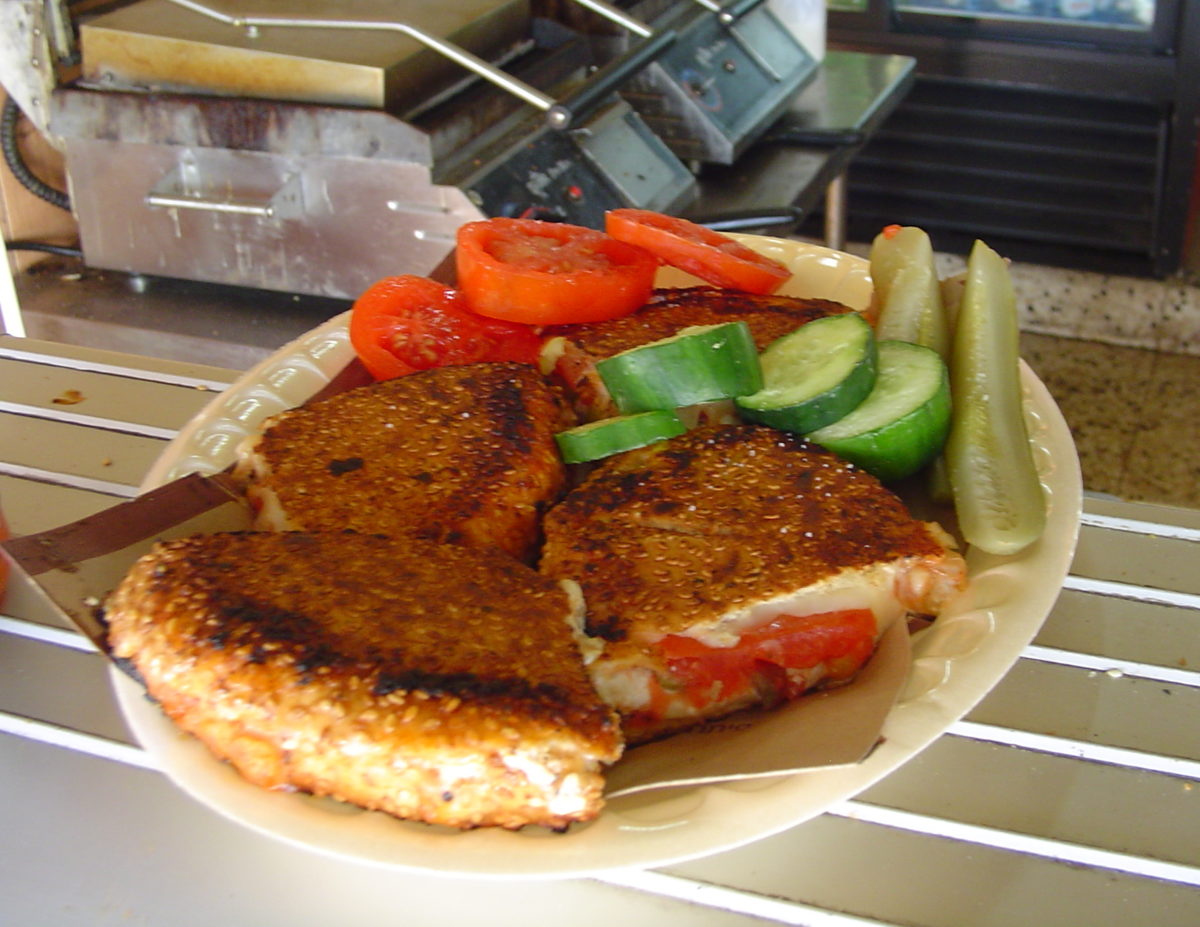 Sabich are pitas filled with fried eggplant, hard-boiled eggs, and other savory fillings.

Less internationally well-known than falafel, sabich is an Israeli street food invented by Iraqi Jews. It is a pita stuffed with fried eggplant, hard-boiled eggs, hummus, tahini, and vegetable salad, and sometimes boiled potatoes, as well as greens, pickles, and sauces. 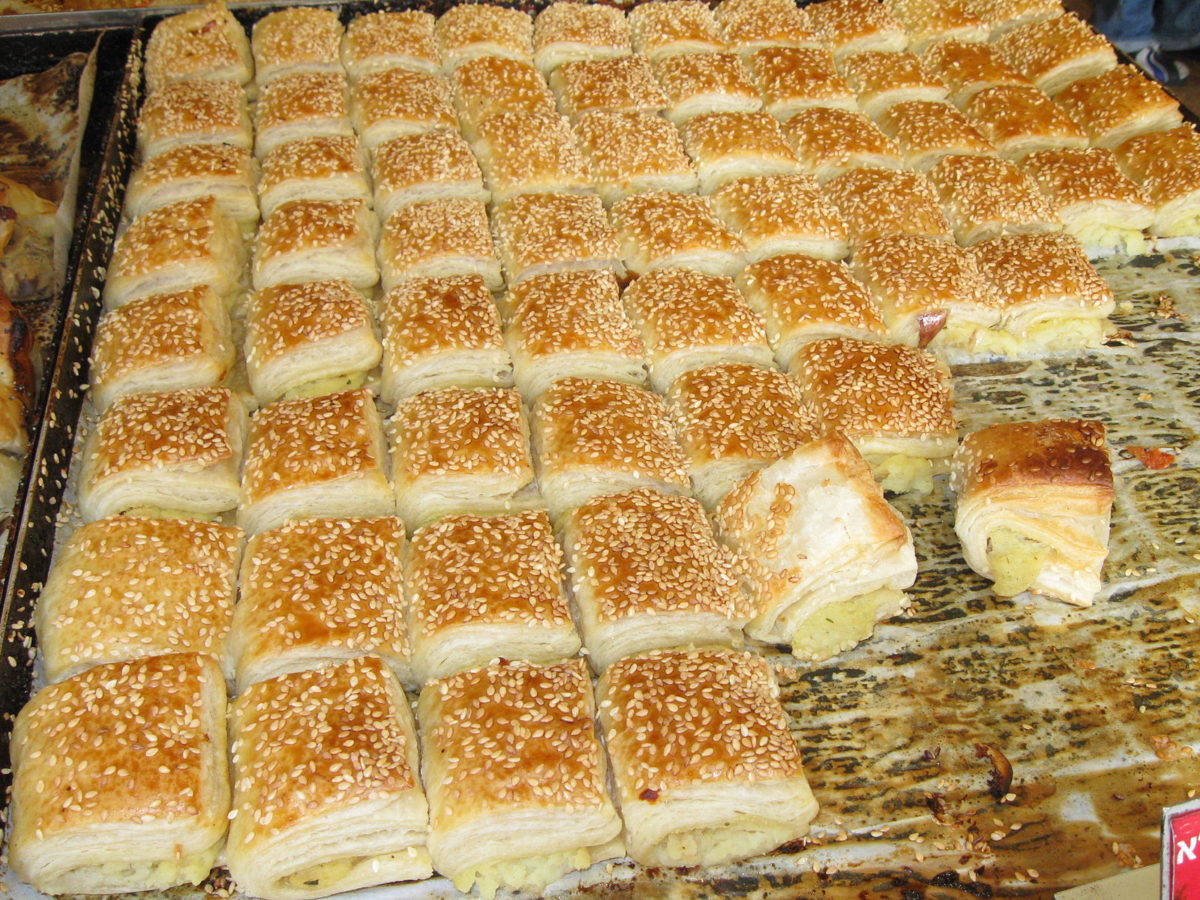 Bourekas–the Israeli version of the Balkan or Caucasusian börek (a filled pastry made of thin, flaky dough) is the perfect guilty pleasure. You can buy a few small ones to take away at most bakeries (the triangle ones are filled with cheese and the rectangle ones with mashed potatoes), but the best way to go is to dine with one of Tel Aviv’s master bourekas makers.

Try the Turkish Bourekas stand just to the right of the entrance at the Carmel Market or Bourekas Amikam on Ibn Gbirol Street, which is open 24/7. In these places, order a big bourekas–preferably filled with cheese or spinach, which is cut into pieces and served with pickles, olives, grated tomato, hot sauce, and a hard-boiled egg.