In the northernmost city in the world, a Le Cordon Bleu-trained chef is finding solutions to harsh-climate agriculture and sharing his findings with the world. Writer Vladimir Weinstein traveled to his hydroponic farm in January 2019 to find out how he came to his passion for permaculture, what it takes to grow fresh greens in the arctic, and how it impacts the environment.

The town of Longyearbyen, Svalbard, is on a remote archipelago that’s 650 miles from the North Pole (about the same distance as New York City and Louisville, Kentucky). It’s the dark season, which means polar night, which means 24 hours of darkness. Polar bears roam the land and, occasionally, the Northern Lights flicker overhead. Within the city limits, out on the tundra, neon purple lights beam out from an alien-looking dome. The dome is a greenhouse that belongs to Benjamin Vidmar. Vidmar is an Arctic farmer. He’s also a DJ. He’s also from Cleveland, Ohio. And yes, out here, in polar night and negative 40 degree wind-chill, Vidmar is growing vegetables. 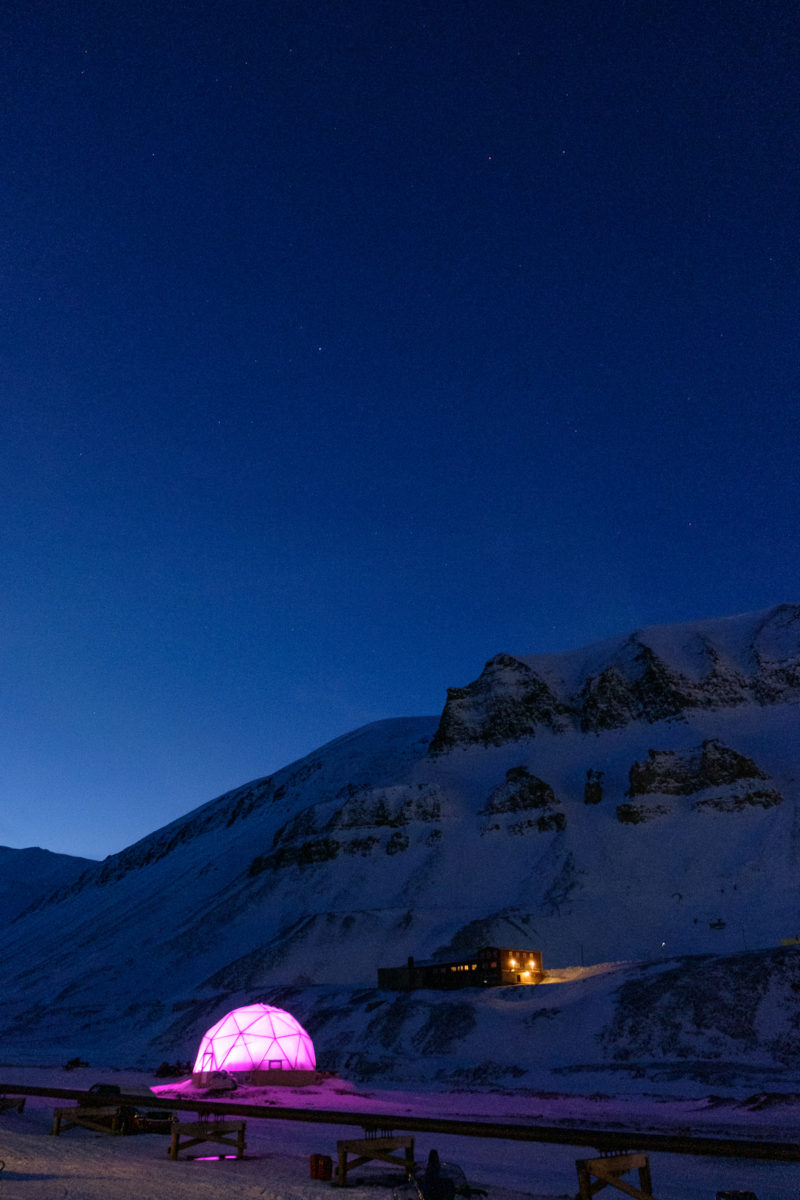 Vidmar has lived in Svalbard since 2007, growing local food he supplies to restaurants in the area. Vidmar’s culinary fire was first ignited back in 1997 while he was living and studying accounting in Borneo, Malaysia. In need of a part-time gig, Vidmar found himself serving in the dining room of a local Turkish restaurant. Overwhelmed with spices and suddenly far from numbers, Vidmar was inspired to elevate his cooking skills, quickly taking priority over accounting. He eventually left Borneo and began studying at Le Cordon Bleu Institute of Culinary Arts in Pittsburgh. “Working with food all day was great,” Vidmar says. “It was the first time I really felt my calling for food.”

After Le Cordon Bleu, and a stint back in Borneo at the local culinary school, Vidmar began cooking professionally—but not in a restaurant. Instead, Vidmar got staffed in the kitchen of a massive expedition ship steering straight for Antarctica. Here, down in the cramped galley, as the ship crested 30-foot high breakers, Vidmar baked fresh bread, prepped linguini, grilled chicken. But the 10-day rotating menu didn’t cut it. “Once I went to Antarctica, I met people who were working in the Arctic, and from there I got a job at the Radisson [Blu Polar Hotel in Svalbard], so I think I just got really lucky,” Vidmar says—and so did the residents of Svalbard. 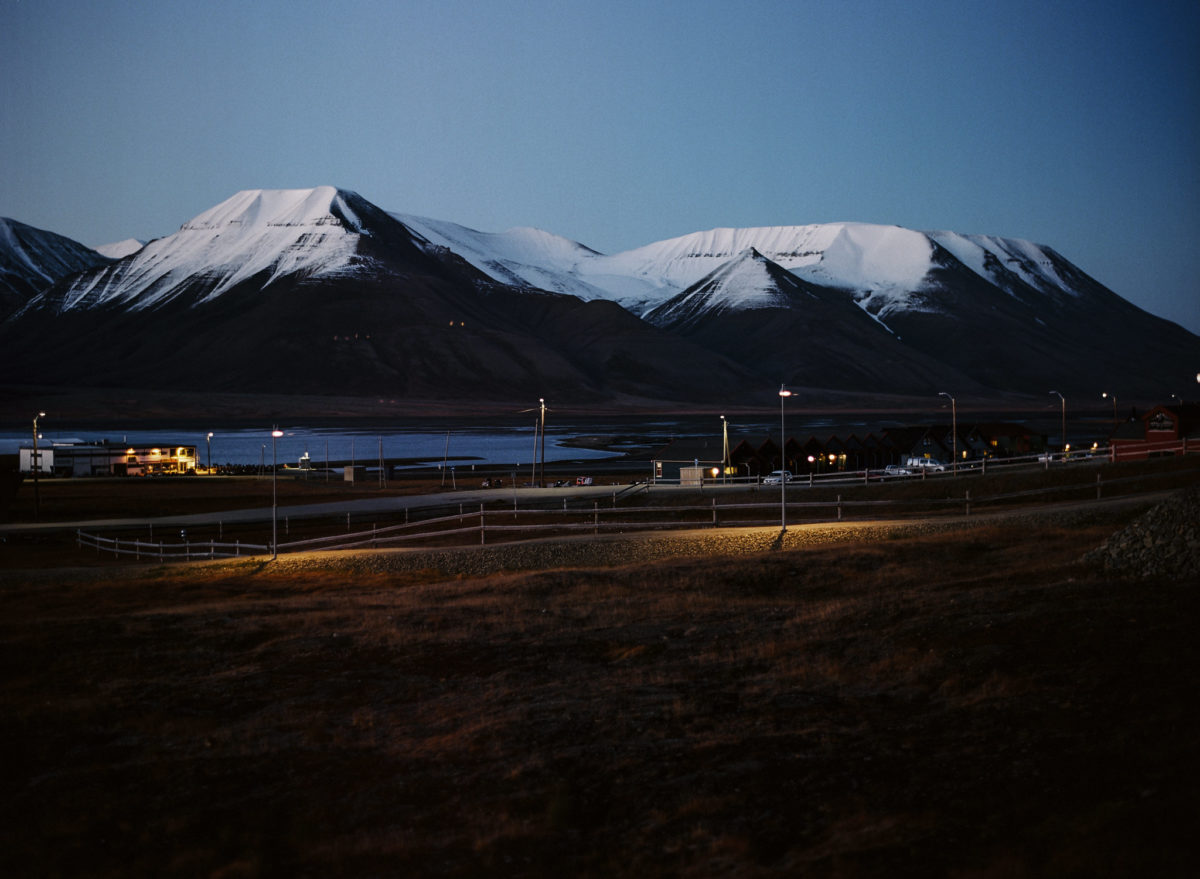 Svalbard came to be after the Svalbard treaty was signed in Paris in 1920, which gave Norway sovereignty—but also allowed any country that signed to also have rights on the island. Photo of Longyearbyen by Chrisopher Michel.

If there’s one takeaway from my arrival in Svalbard, it’s that the people of Longyearbyen (Svalbard’s main settlement) are hard workers with little spare time to hang out. Often working two or three jobs to pay the bills, the approximately 2,500 residents are a smorgasbord of miners, scientists, students, expert trekkers. Vidmar is the town’s sole DJ—he spins every Saturday night at Huset, the town’s star nightclub.

On a quiet Thursday night in Longyearbyen (though it’s only 3:30 p.m.),  I suit up for my first meeting with Vidmar. Based on a few days experience with local weather, the landscape is hardly what it seems due to mountainous elevation. You could end up unknowingly walking or driving up 1,000 feet, where the weather can be harshly different in the mountains than in-town. Wool socks, top and bottom base layers, wind-proof pants, and a hearty jacket are mandatory. Skimping on the toe-warmers isn’t advised. The fjords in Svalbard are gorgeous, but the wind-chill is biting. 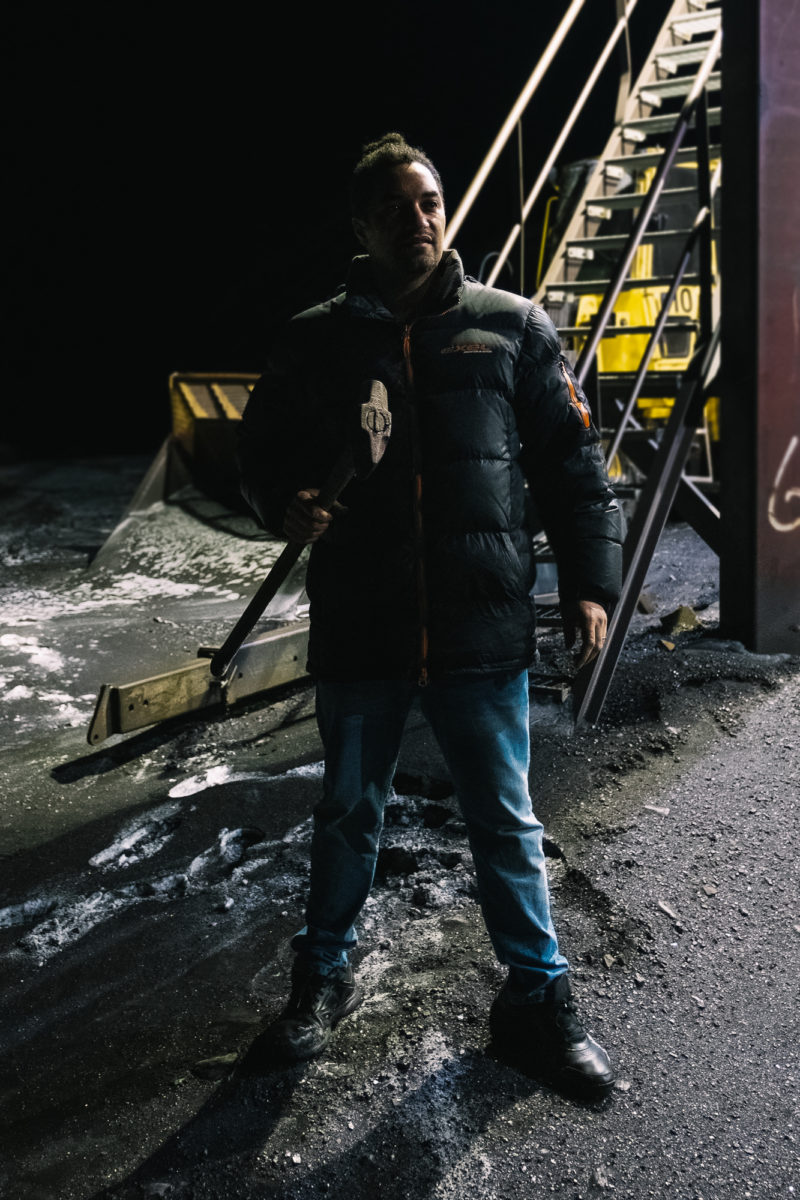 I’m dressed like the Michelin Man when Vidmar picks me up and drives me towards Polar Permaculture’s base to begin our Arctic farming tour. Here in Longyearbyen, mid-winter, Vidmar grows radishes, carrots, edible flowers, black cabbage, cucumbers, and even potatoes. In total, he produces 20 trays of fresh greens a week. Each tray produces about 3.3 pounds of microgreens that are used as garnishes, in sauces, and more at local restaurants in town.

“This is the Polar Garden,” Vidmar tells me as we walk into the humid greenhouse. An earthly odor hangs in the rain-forest-damp air. Government-approved worms and compost sit idly in the hall. “The biggest challenge was getting permission for my worms,” Vidmar explains to me. To give his organic compost a jumpstart, the inclusion of worms was crucial. “It took over a year and a half [for permission from the government],” Vidmar adds. “I couldn’t believe how complicated it would be just to bring the worms here.”

The administrative issues—stemming from strict Norwegian agricultural law in Svalbard—don’t end with worms. Until not too long ago, Polar Permaculture also sold fresh quail eggs, much loved by the surrounding community. But then came questioning from the Food Safety Authority, based 600 miles away in Trømso on mainland Norway. Even after passing multiple sanitary tests, Vidmar’s quails were ordered to be put down. 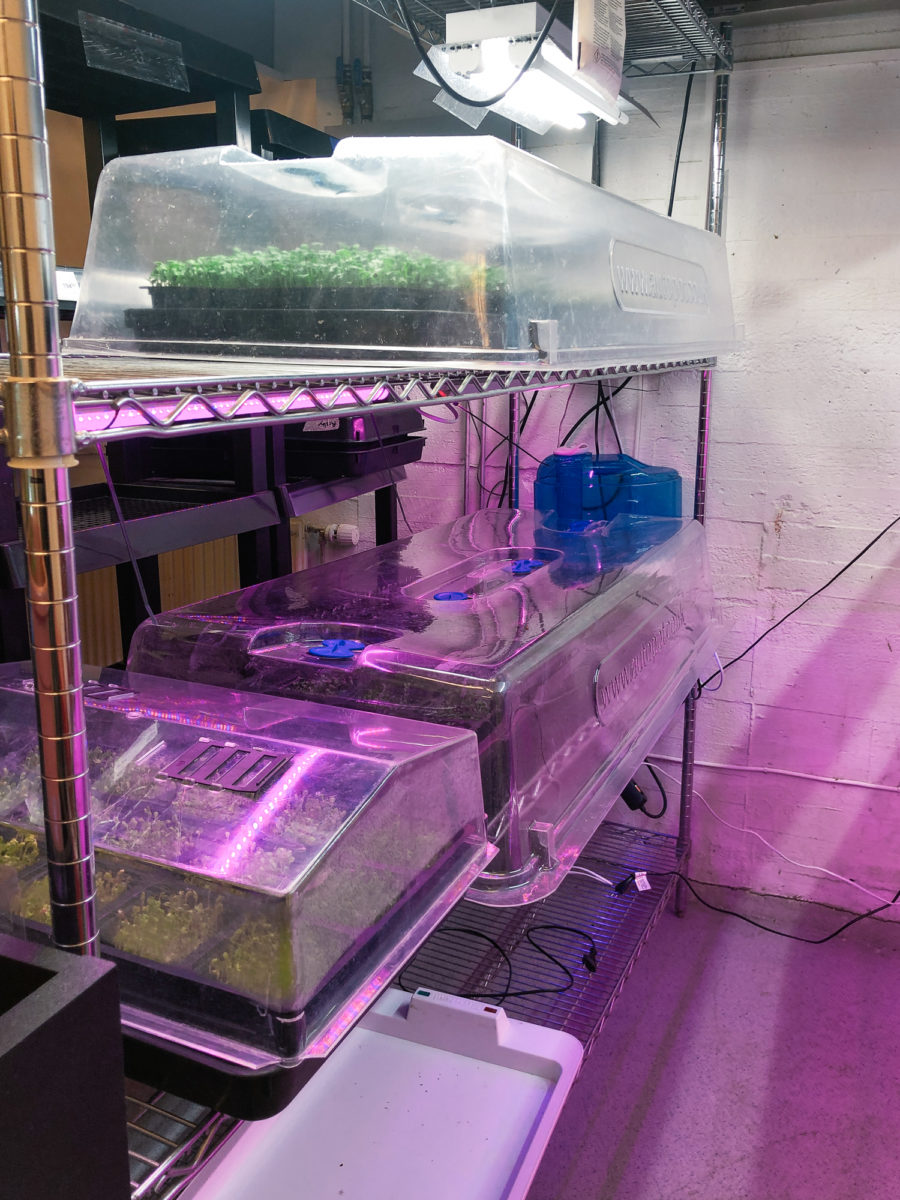 Vidmar produces around 20 trays of fresh greens a week, about 3.3 pounds of microgreens per tray. Photo by Samantha Nandez. 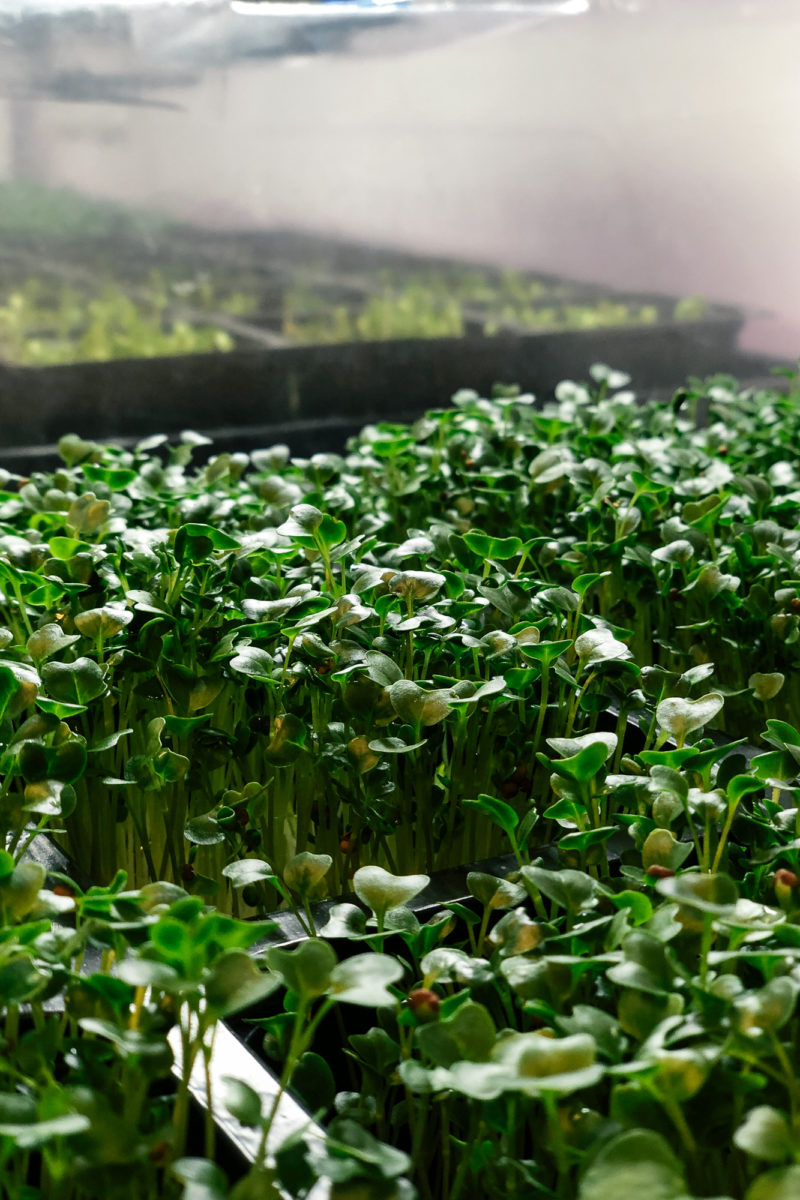 Nevertheless, with an international team of part-time volunteers, Polar Permaculture operates in both summer and winter. Because the soil is so expensive to import from the mainland and sustain, Vidmar spends a lot of time testing a variety of materials, cardboard for example, to see how plants react to growing in them. The key word here is “hydroponics”—a method of growing plants without soil. Vidmar has sourced his knowledge of hydroponic farming over the years from a variety of visiting farmers, chefs, and scientists.

Each year, winter hits Svalbard with six months of brutal cold and around-the-clock darkness starting in October. During this time, produce grows by LED lighting, but in the summer, Polar Permaculture’s key operations are situated both indoors and outdoors, in the winter-proof greenhouse (the purple dome) supplied by designer James Freed of KingDome in Missouri. Now considered a visual landmark for the city, the greenhouse sits at the base of Plateau Mountain. The greens are provided 24 hours of continuous sunlight there. 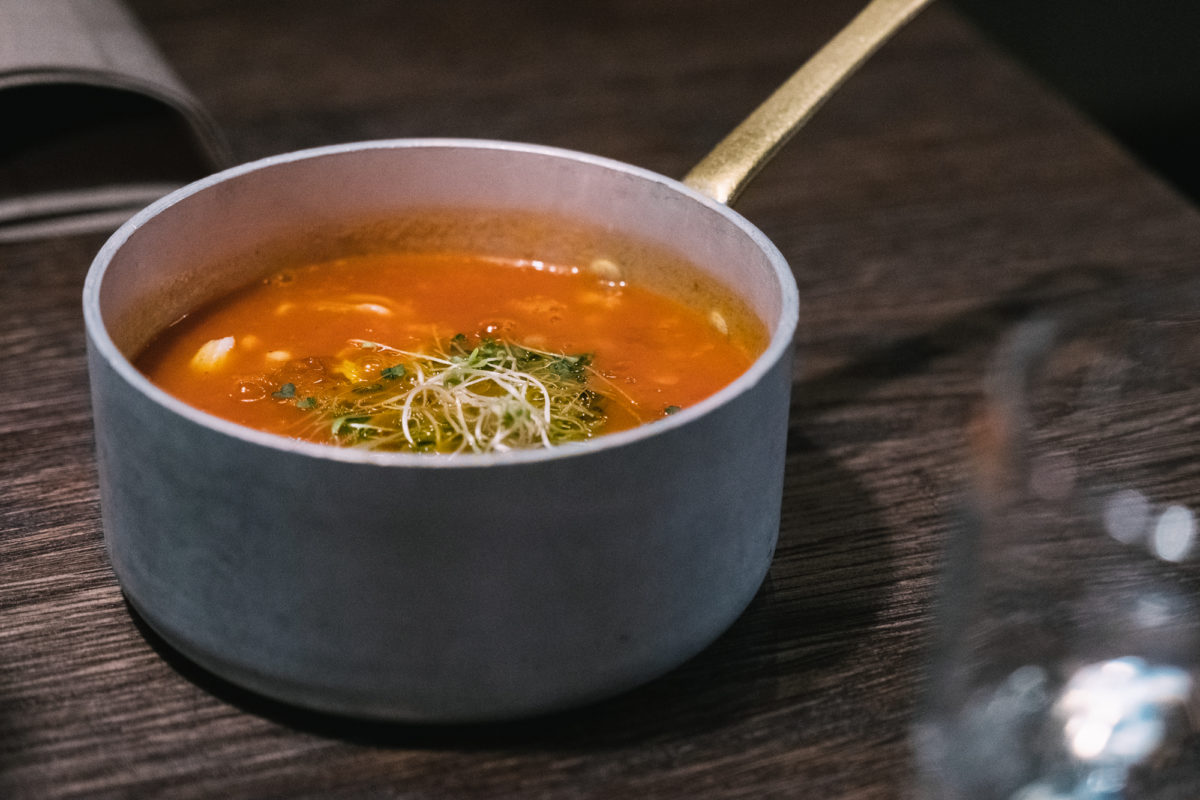 A lentil soup with king crab, served with fresh greens supplied by Polar Permaculture at Funktionærmessen Restaurant inside the Funkenlodge. Photo by Vladimir Weinstein. 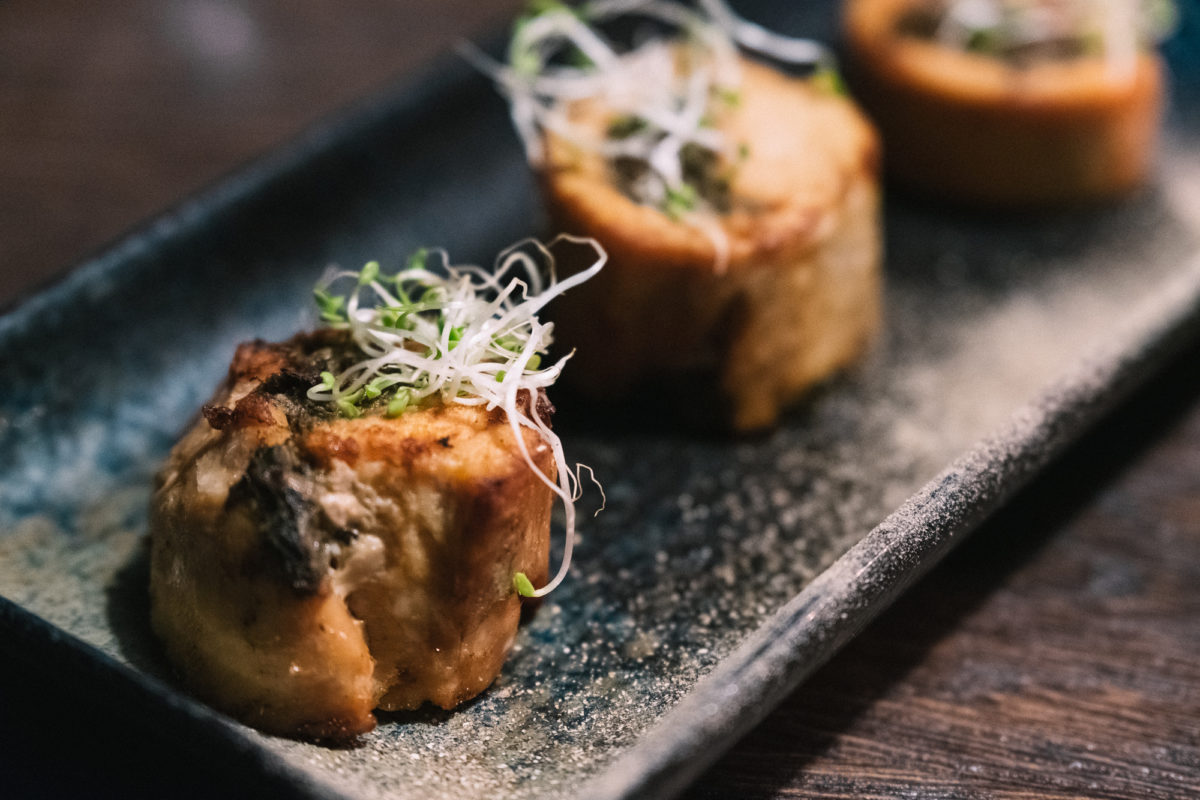 It’s now 4:30 p.m.—time for dinner service deliveries. Vidmar is currently focusing on Polar Permaculture’s fresh greens distribution business and is engaged in local cultural events via catering efforts. By supplying local restaurants and events with produce, Vidmar is reducing the amount the area has to rely on imported produce, which means fewer carbon emissions and less waste.

As I follow along, Vidmar loads up his van with fresh sprouts and heads off to FunktionÆrmessen Restaurant. They’re Vidmar’s largest customer, and Longyearbyen’s highest rated boutique hotel and restaurant. Next delivery: Stationen, a quaint, dimly-lit restaurant in the city center. Vidmar smiles deeply. His pride is obvious—selling fresh greens to his community, midwinter. Nobody else is doing this. As we drive, Vidmar tells me he now has his sights set on building a Polar Permaculture kit for those in similar remote regions to be able to start growing and eventually bring fresh greens to their communities, which would mean even less carbon emissions and waste from imported foods.

To finish out the night, Vidmar drives me west. We speed through the darkness, past the dog yards—hundreds of kennels of sledding dogs loaned out for expeditions, kept outside city-limits to limit noise. Finally, we arrive at the top of a large mountain, and Mine Seven—Svalbard’s last active mine—for a scenic overlook. The view of the dark landscape here is breathtaking, even on a cloudy night. Of his work, Vidmar says, “I’m here to complete my mission. I’ve held on to this idea like a burning coal in my hand.” If sustainable agriculture can be accomplished in the world’s northernmost city, he believes, it can be done just about anywhere.