7 Fall Soup Recipes from Chefs Around the World

Soup: an underrated hero and the champion of autumnal cuisine. Photo by Annika Palmari.
IndexAmanda Zurita

Get cozy this fall with these seven soup recipes from chefs around the world, from Ireland and Morocco to New Orleans.

It’s finally the season where staying indoors feels warm and fuzzy instead of, you know, a little too close for comfort. In fact, curling up in a blanket on the couch with a cup of soup is such a quintessentially fall pastime—up there with Harry Potter marathons and kicking the leaves around—that it’s almost easy to forget ever being forced to stay inside. But why warm up a can of soup when you can craft your own from scratch?

With a chill now in the air, we asked chefs from New Orleans to Vietnam to share soup recipes that warm their bellies and their souls. They handed down childhood stews that harken back to cozy days in grandma’s kitchen and shared memories found at the bottom of a bowl. 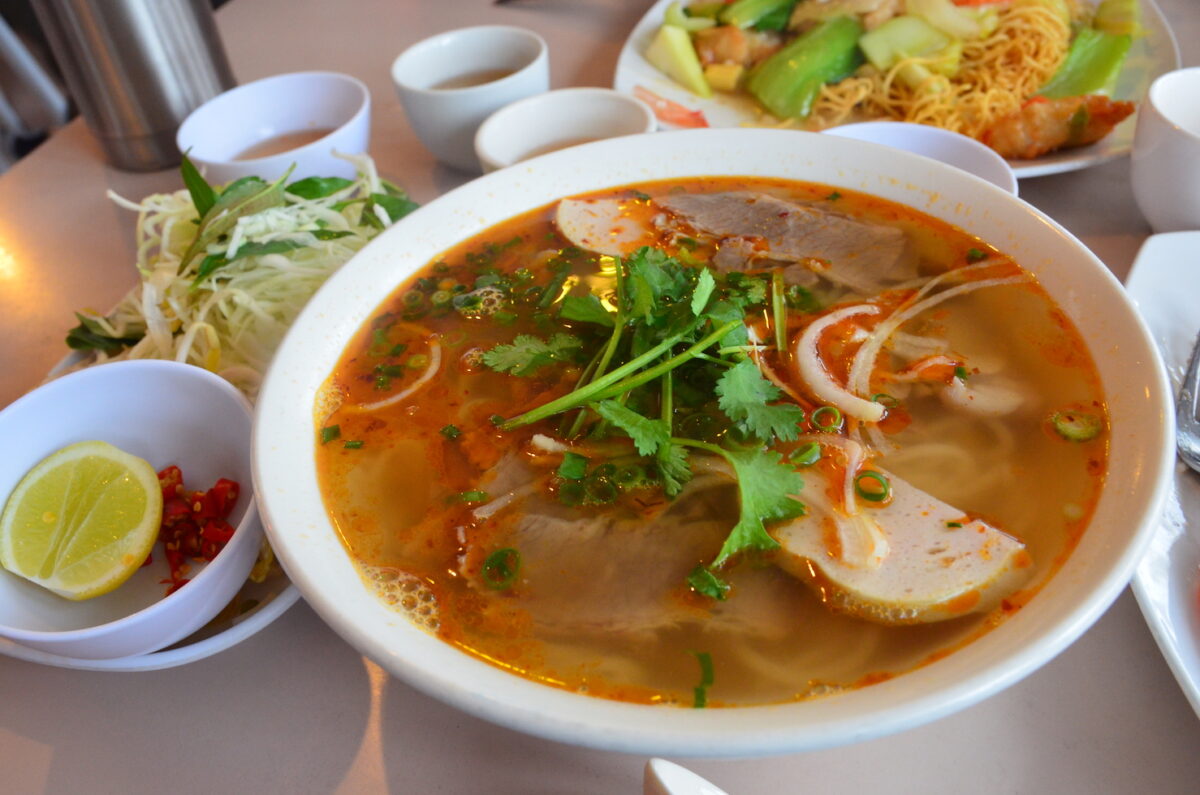 Kick off the cold months with a steamy bowl of Vietnamese bún bò. Photo by Avlxyz.

“This is a recipe for bún bò, an umami, flavorful noodle soup full of lemongrass infusion. When people talk about Vietnamese noodle soup, they think of pho, but pho is actually not popular where I grew up. In its place is bún bò, and I am basically addicted.

The soup is packed with intense flavors, but at the same time it feels very lean, sharp, and light without ever being fatty or heavy. As “bún” stands for the rice vermicelli and “bò” stands for beef, this noodle soup is served with an array of beef cuts which can be brisket, tail, tongue, etc. There are also options for a piece of pig’s leg or crab meatballs, and an assortment of herbs and greens freshen up the bowl of noodles. You can even push the flavor further with condiments like pickled shallots, papaya, carrots, and chili sauce. All together, it’s a bomb of taste and texture.”

How to make bún bò

Place a handful of the rice vermicelli in a serving bowl. Top with the sliced beef. You can also add boiled blood cubes (huyet), Vietnamese shrimp patties (chả huế), or Vietnamese ham (chả lụa) if available. Ladle the broth over the noodles and garnish with the chopped spring onion, cilantro, and paper-thin sliced onion. 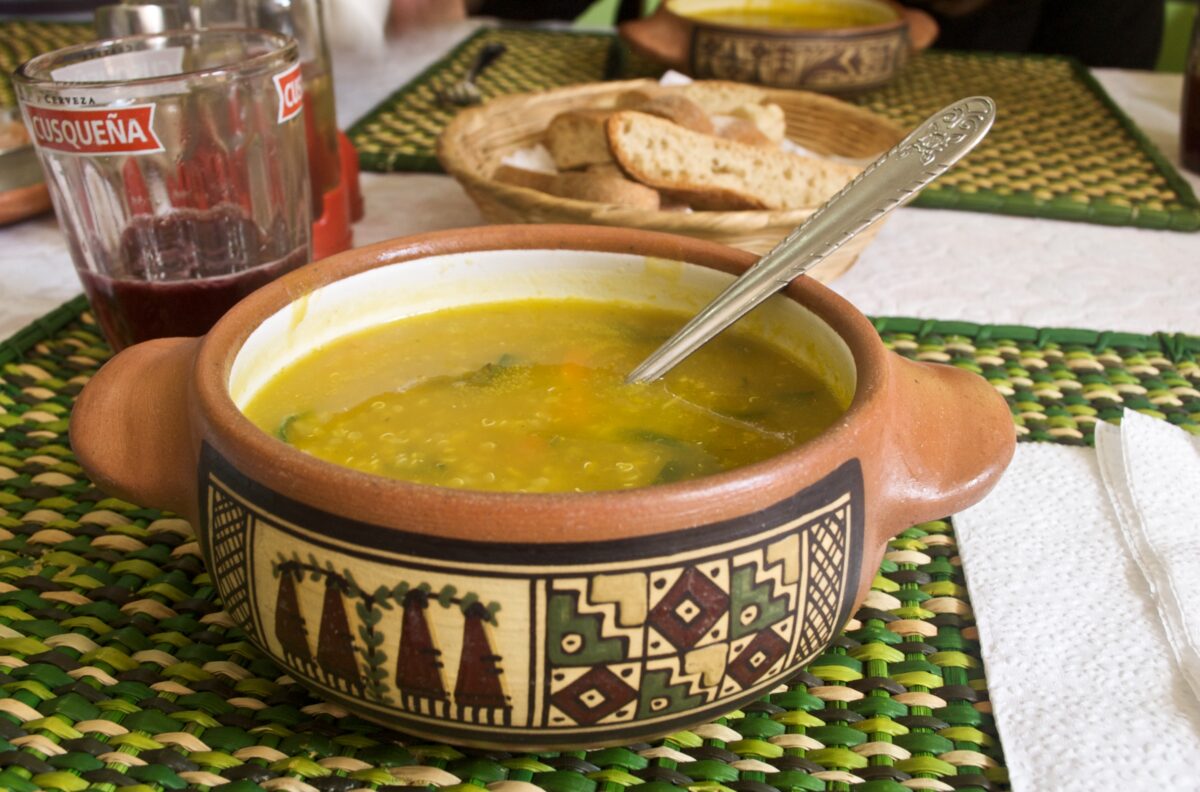 Quinoa soup has been a Peruvian specialty for generations. Photo by Jenny Villone.

“This delicious (and nutritious) quinoa soup is a cozy fall dish with ancient Incan roots. An Andean grain grown at more than 380 meters above sea level, quinoa has been used in Peruvian cuisine for centuries, since it was first cultivated by the Incas. Quinoa’s ability to flourish high in the Andes was not the only draw for the ancient inhabitants of the region—its rich variety of nutrients like proteins, vitamins, and amino acids made it a staple in the Incan diet. Cooking with quinoa represents a tie to the land where I live and is a nostalgic reminder of my childhood—my grandmother used the grain almost daily.”

How to make Peruvian quinoa soup

For the vegetable stock:

For the quinoa base:

Combine the broth and base:
Strain the vegetable broth into the quinoa base and stir. Then add the cubed cheese and mix into the soup. Separately, beat two eggs in a bowl then mix them into the soup. Stir in the evaporated milk and add salt to taste. Finally, chop some cilantro and stir it into the soup.

How to create the perfect Peruvian pisco sour cocktail → 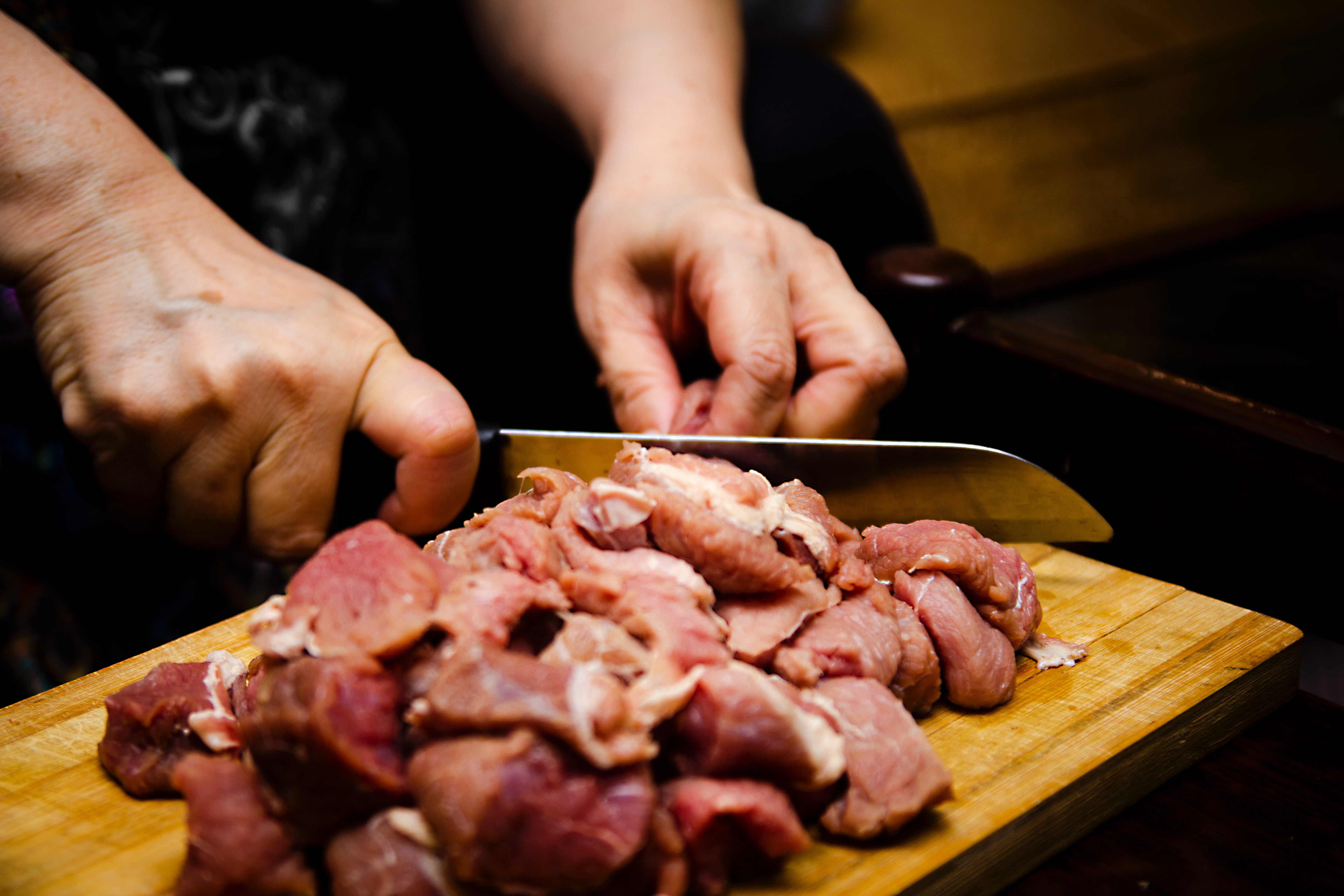 Dice up some beef and pork for a big helping of a New Orleans twist on Isleño caldo. Photo by Usman Yousaf.

“One of my favorite winter dishes growing up was my Nana’s vegetable soup. She called it vegetable soup, and it definitely had all sorts of vegetables, but it also had deliciously tender morsels of chuck roast. It was perfectly satisfying on a cold winter day. Then when I traveled to the Canary Islands a few years ago, the first dish my host family served me was the national dish of the islands, called caldo, and it was oddly familiar. It was my Nana’s vegetable soup, but with tender goat meat as a substitute for the chuck roast. You see, Canary Islanders (or “Isleños”) once settled in four areas in Louisiana—the longest-enduring of which is St. Bernard. And while their cuisine has much in common with Cajun cooking, which draws common ingredients from the same region, a few distinct dishes with roots in the Canary Islands are still served today.

I now make my own version of this soup for my kids. I can only hope that as they grow up and start to travel the world, and that one of the dishes I cook for them creates an impression on them as strong as my Nana’s ‘vegetable’ soup did me.”

How to make Canary Island Caldo 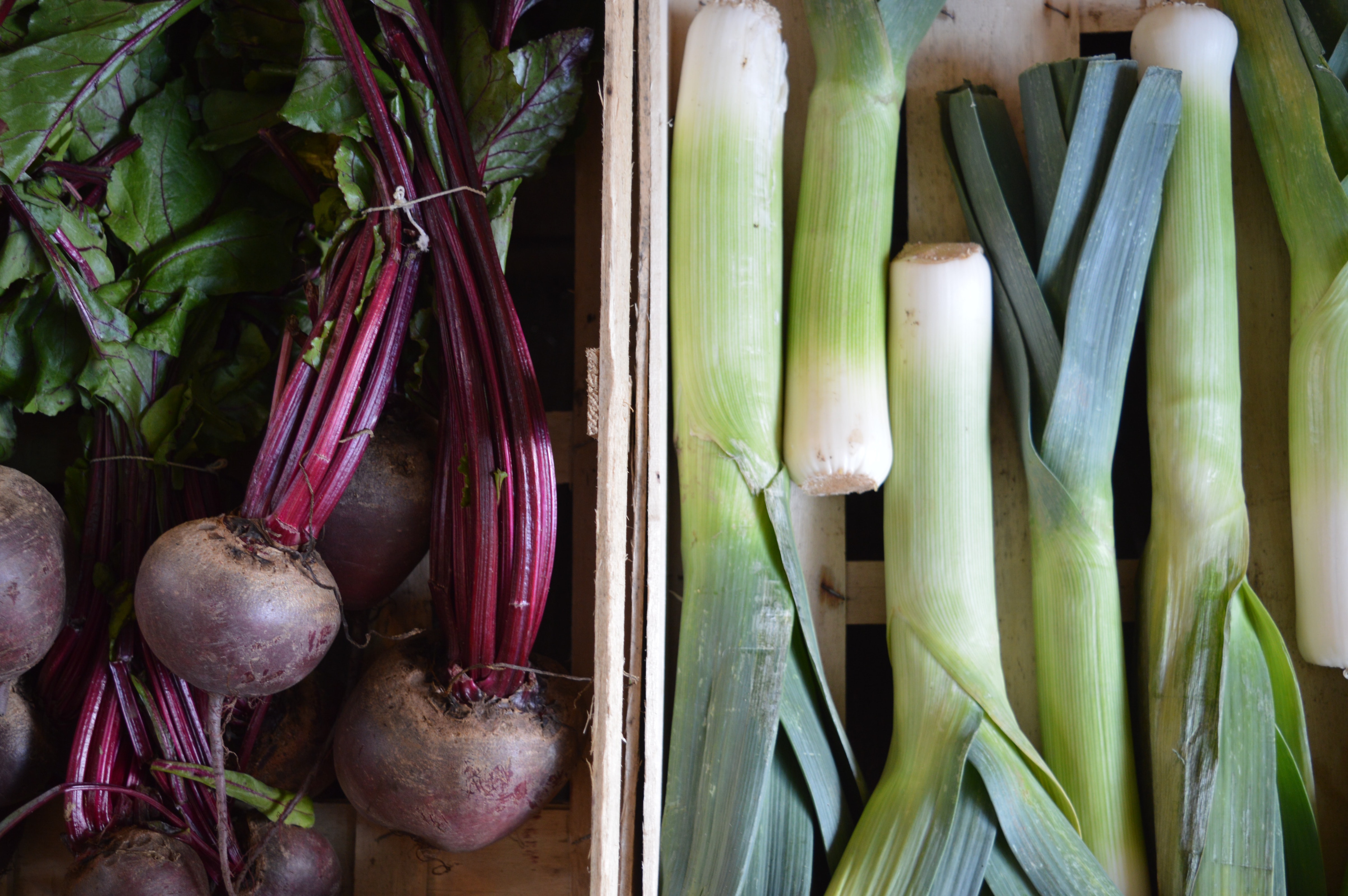 Nothing warms the soul on a cold day like an Irish soup hearty with leeks, onions, and potatoes. Photo by Lucy May.

“A good, hearty soup is a very popular dish to eat in Ireland. Our sometimes cold and rainy weather welcomes the warming nourishment of a steaming bowl of goodness. Traditional vegetable soup is a real staple of an Irish kitchen—it comes packed with root vegetables (perhaps pulled from the garden), barley, and potatoes, and finished with robust curly parsley and sometimes even a drizzle of cream. I chose a soup that shows off some of the best produce local to where I live. World-class oysters and a pinch of dulse seaweed add a briny umami flavor and a touch of luxury to a very simple leek and potato soup.”

How to Make Irish Leek and Potato Soup with Carlingford Oyster

Everything you need to know about Dublin’s culinary comeback → 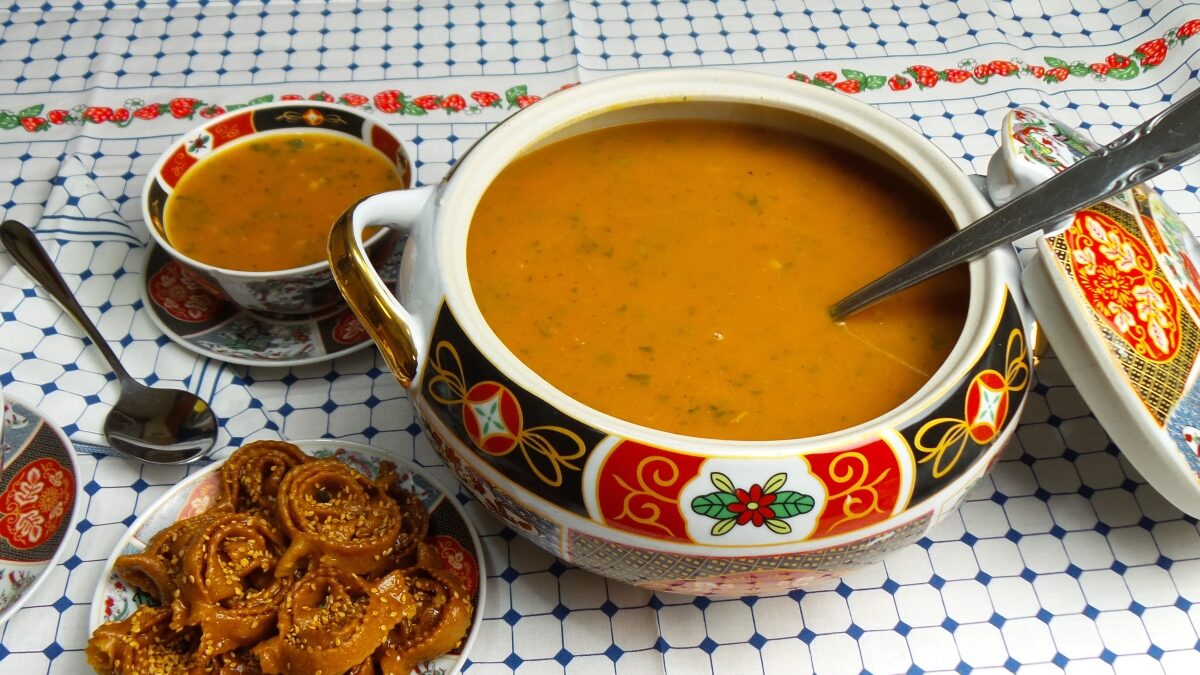 Transport yourself to Morocco with a bowl of harira frik soup. Photo by Ali Andalousi.

Hanane Ouaddahou, Chef and Founder of Hanouna’s Taste in Morocco and Dubai

“The harira is a symbol of the fasting break during the month of Ramadan. All the streets in Morocco smell of celery and a mix of spices. It always takes me back to my father visiting me when I was studying in Paris. I was preparing this soup, and I’ll always remember my dad telling me that the smell reminds him of my mum’s food back in Morocco. This pushed me to follow my passion for food and work hard to become a TV chef and food consultant a few years later.”

Why winter is the best time of year to visit Morocco → 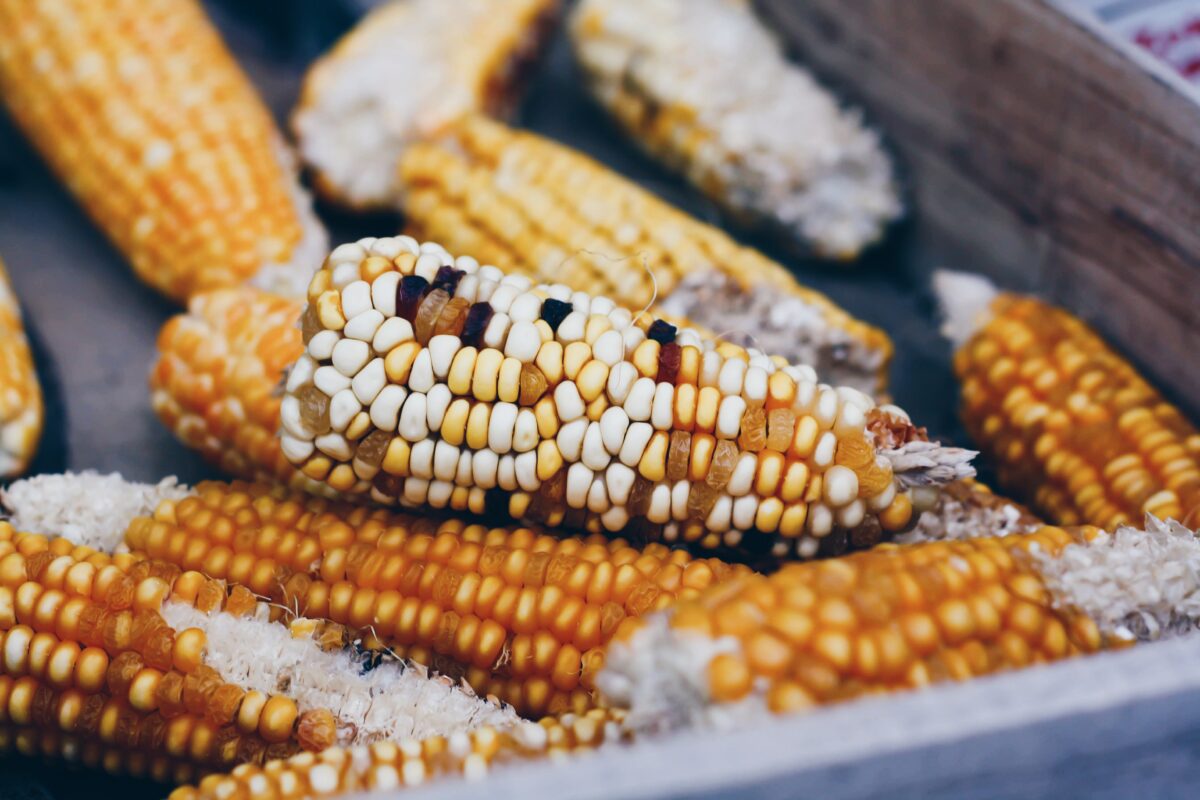 “The sopa de milpa verde was one of the staples in my grandmother’s famed restaurant Fonda el Refugio in Mexico City. A personal favorite of mine due to its subtle yet complex flavor balance, it uses some of the core Mexican ingredients grown on traditional pre-Columbian vegetable patches (milpas) combined with a few basic European cooking techniques. This amalgam of cultures is what makes Mexicans such an amazing group of people, and it is reflected in every aspect of their identity.”

The ultimate guide to Mexico City → 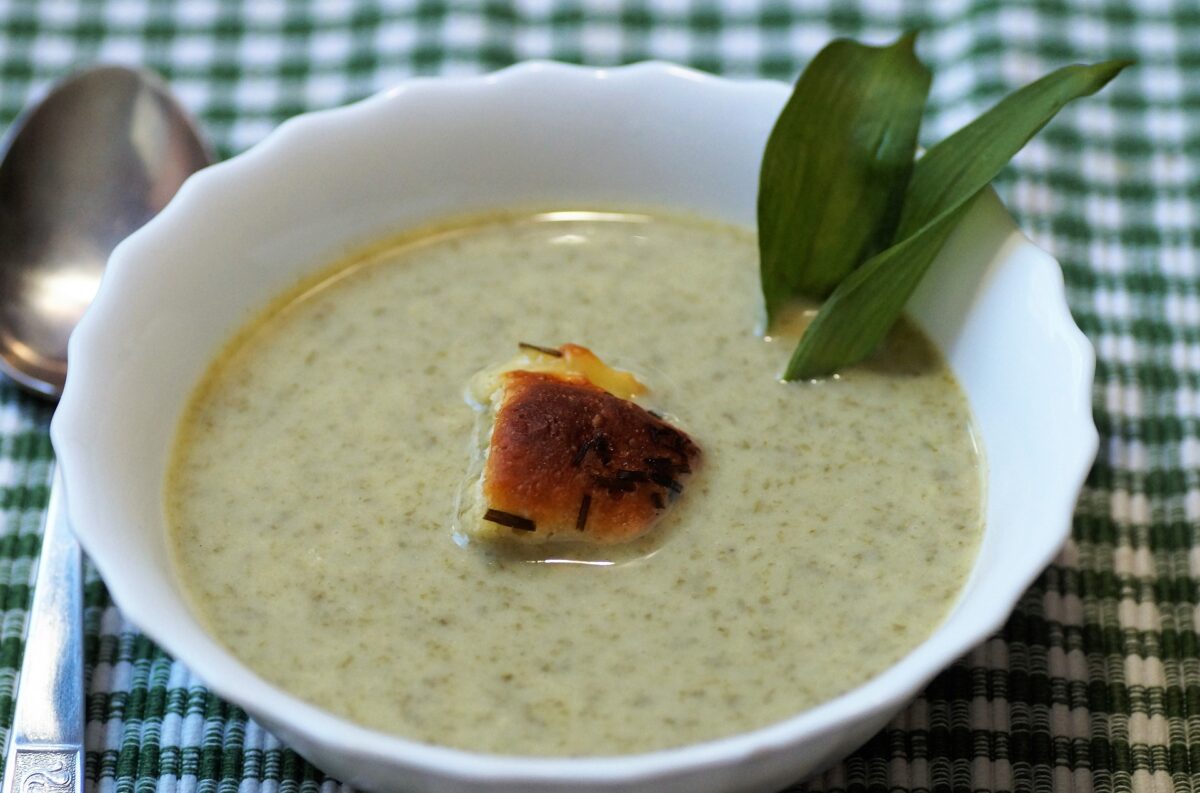 Bruce and Sara Naftaly, Chefs and Owners of Marmite in Seattle

“Nettle soup is not only a good representative of our culinary ethos (classic and heartfelt French cooking using local, organic/wild, and foraged ingredients in season), but this dish has a romantic association for us as our first date was picking wild stinging nettles!  Nettles are usually one of the first green edibles up in the spring and make a delicious beginning to the culinary year following the long, cold, dark winter (or, in this case, a good hearty soup to carry you through the cold!).  Just a warning: Do not handle stinging nettles with bare hands. Use tongs or wear gloves.  They are fun to pick in the wild, but recently they’ve been showing up at more upscale grocery stores.

How to make French nettle soup