The garden restaurant at Hôtel Amour, an affordable but stylish joint enjoyed by locals and visitors alike.
Like a LocalHere Magazine

Alexandre Cammas, founder of Le Fooding, shares his guide to the best restaurants, bars, and hotels in Paris, France.

Parisian born and bred, food journalist Alexandre Cammas has been documenting the culinary scene in the City of Love for the better part of 20 years. In 2002, he and a group of friends (and fellow food lovers) founded Le Fooding—a comprehensive guide to the best restaurants, bars, and hotels in Paris—where he currently works as director and managing editor, most recently launching the Priceless Cities Best New Bistro food awards program.

While Le Fooding now hosts international transdisciplinary events—their food, music, graphics, and design-based fests live in France but have had stints in LA and NYC—the primary way to Cammas’s heart will always be through his stomach. Below, find the Parisian cafés, cocktail bars, and meals he believes stand out among the rest. 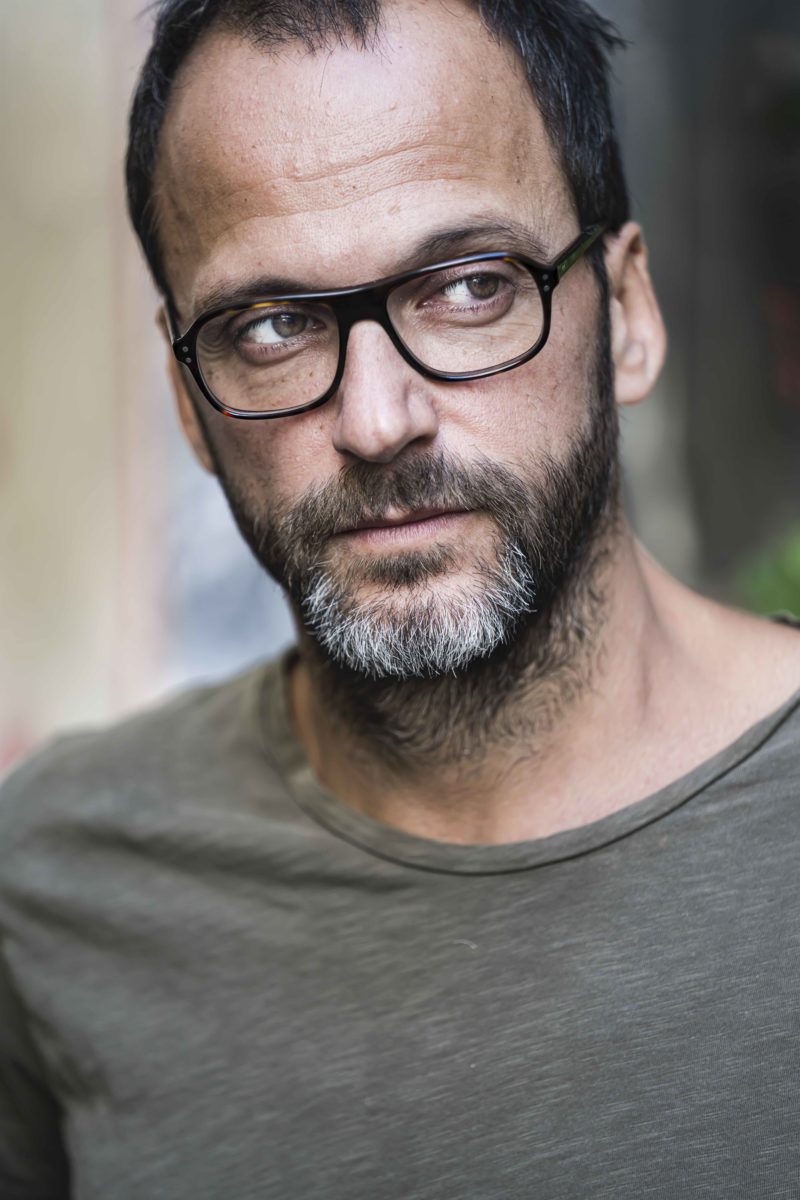 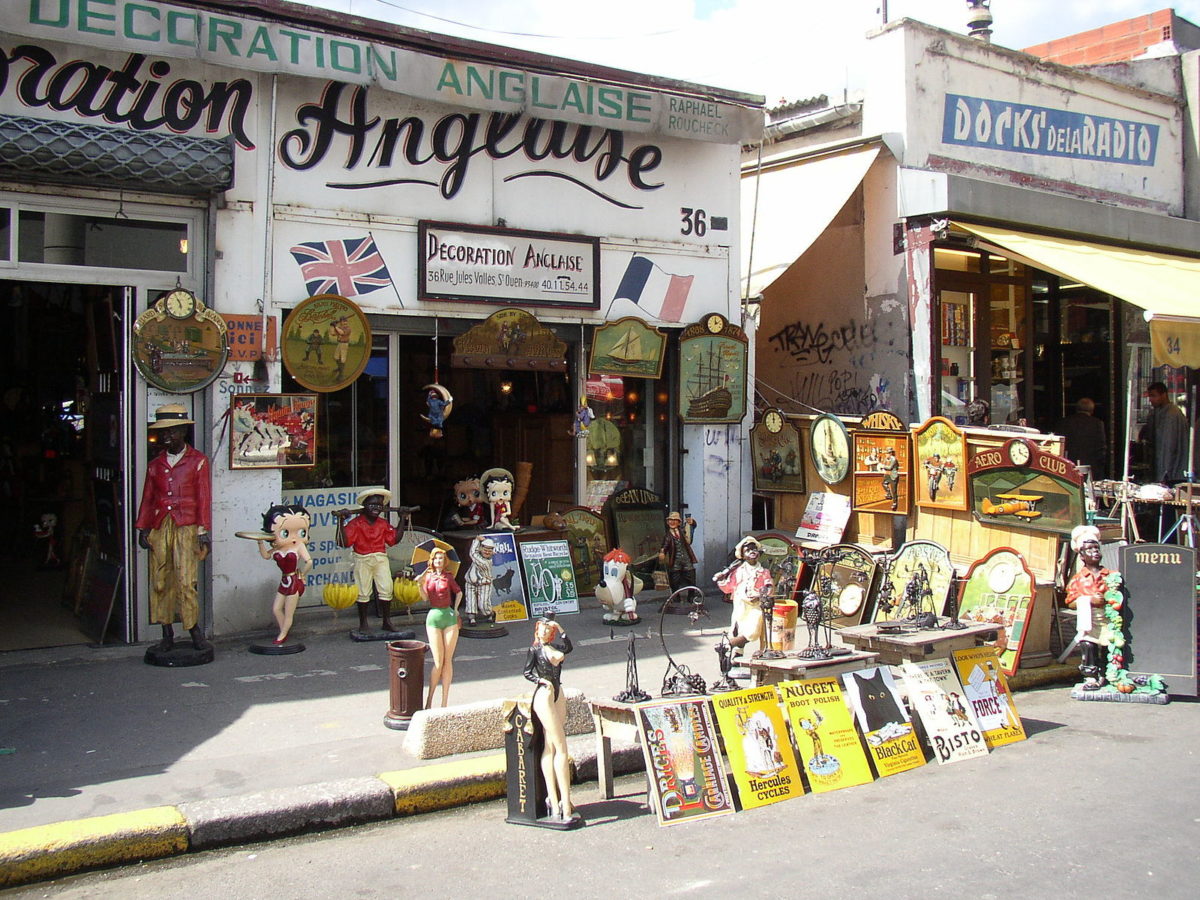 Also known as Les Puces de Saint-Ouen, the Clignancourt Flea Market is arguably the most famous in the city. 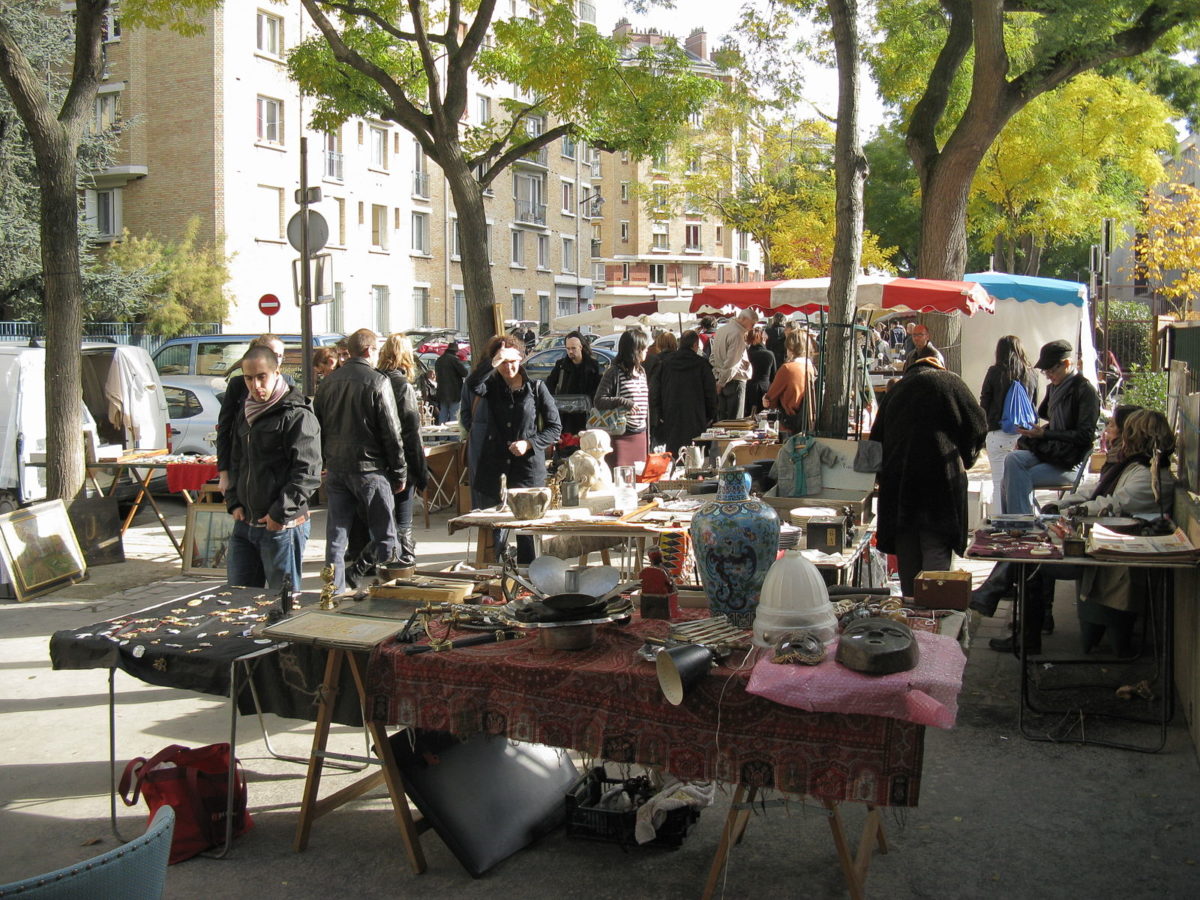 The goods at the Vanves Flea Market are often smaller and more affordable than those at popular Clignancourt.

When I’m not having a cup of Nespresso at home, I’m heading straight to Mokonuts, where the coffee is good, the granola is even better, and the cookies come out of the oven piping hot. The place is simple, small, and welcoming with an open-kitchen and owned by the freshest couple in East Paris: Omar Koreitem and Moko Hirayama. It’s also one of the best spots for lunch in Paris.

On weekends, I like to go shopping on Rue de Faubourg St. Denis and buy cheese, pasta, meat, bread, croissants, and fresh produce. You can also find me in the aisles of the Vanves or Clignancourt flea markets. 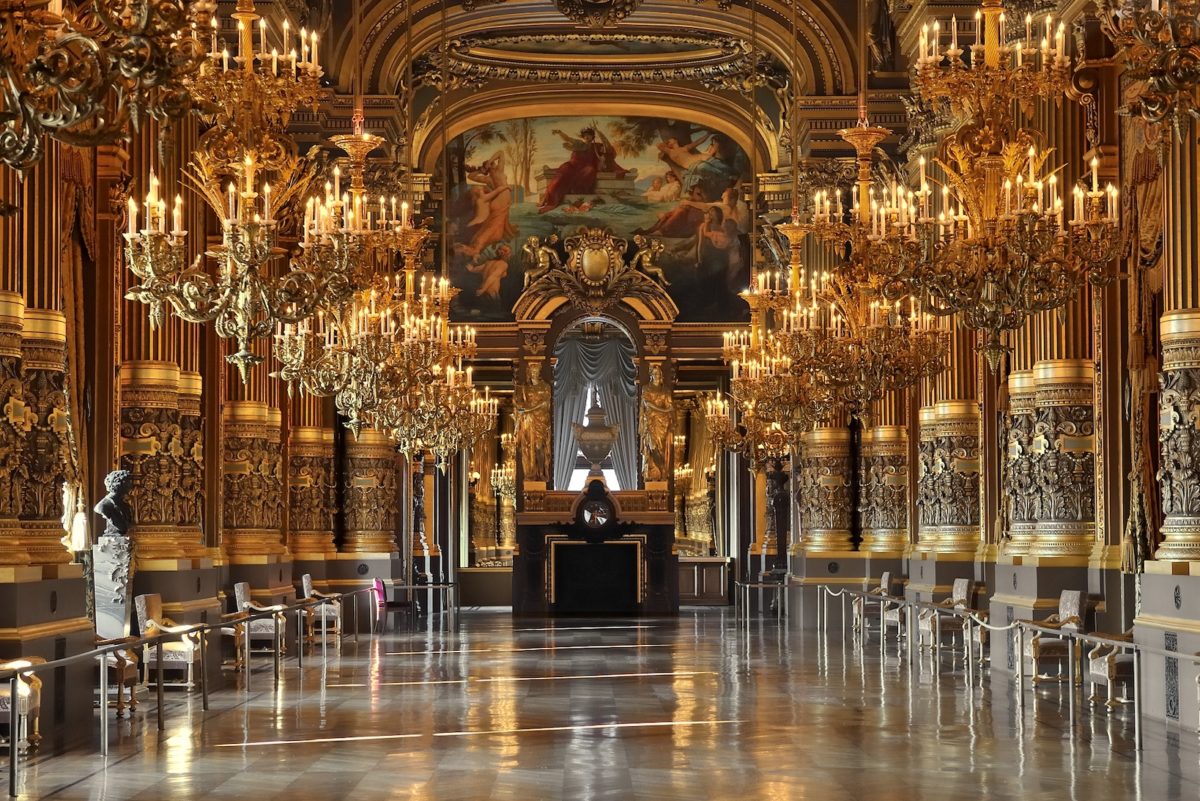 Also known as the Palais Garnier, the Opéra Garnier is home to both the Paris Opera and a historic library. 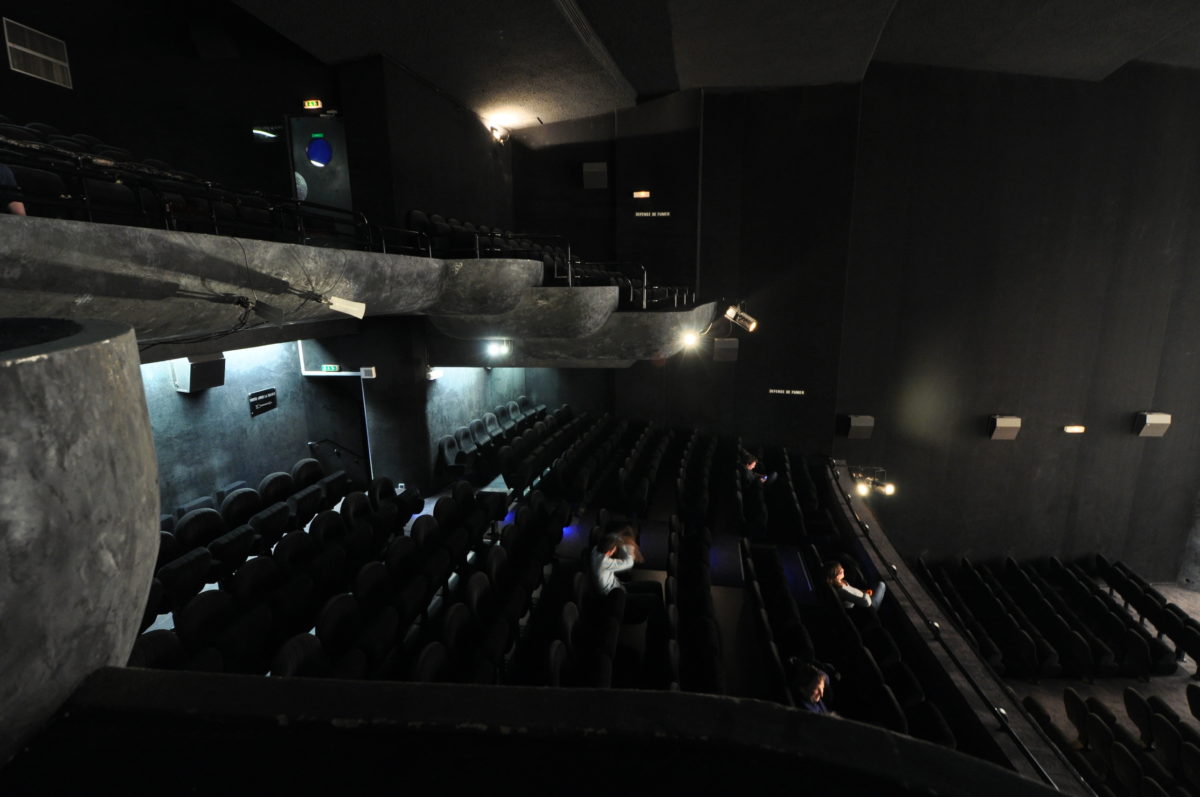 The Max Linder cinema seats only a few hundred guests.

For lunch, I like to book a Formica-topped table at Le Maquis, one of three exciting “bistros” shortlisted for our first-annual edition of Priceless Cities Best New Bistro, a new international food awards program launched by Le Fooding and MasterCard in Paris, London, New York, and Mexico City. It’s a typical French corner bistro, yet it’s actually not all that typical since everything there is better than everywhere else. Thinking back on the last cod brandade I ate and the last chocolate cake I devoured, all for the modest sum of €18, has me quite literally drooling over my keyboard.

I  like to read a lot, and one of my favorite book shops is L’Ouvre Boite located on Rue des Petites Ecuries. I’m also a cinephile and highly recommend the Max Linder and Beau Regard theaters. I also enjoy discovering new artists at the Martel Art Gallery.

I sometimes go to the ballet at Opéra Garnier after work. I’m not really into museums and exhibits. For me to truly appreciate a piece, I need to be isolated. At a concert (even in the pit) or a theater, you are alone with yourself. No interference.

Not far from my place, there is a great doughnut shop called Boneshaker Doughnuts in the Sentier neighborhood. If I had a late breakfast, I sometimes order a veal kebab in the early afternoon at Ozlem—the best kebab in Paris (at least among those I’ve tried). 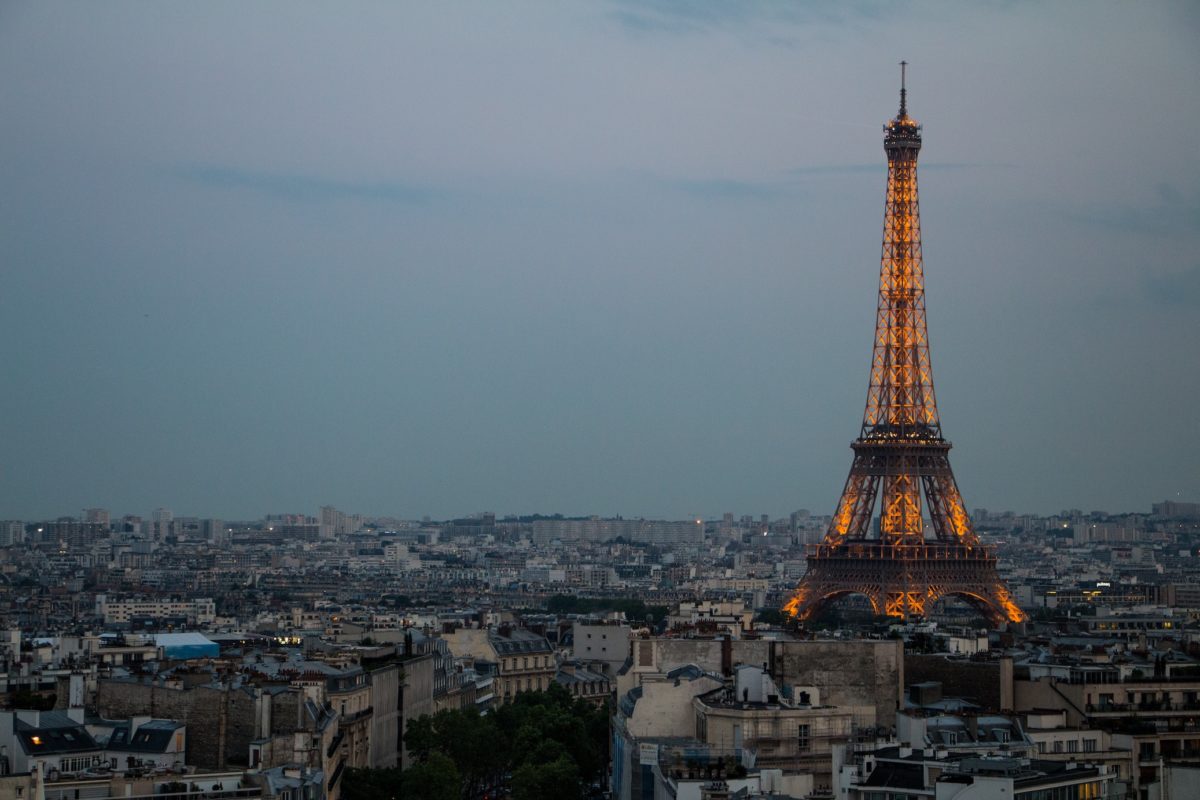 Rain or shine, dinner in Paris is sure to be a treat.

If the weather is nice, I’d take friends to Cuisine at 7:30 p.m., a small Franco-Japanese wine bar with two no-reservation tables out front that most notably offers up some incredible veal brain tempura, fried pigeon, and outrageous natural wines.

If the weather is grey, I would take them to Cheval d’Or, also at 7:30 p.m., to grab one of the (also unbookable) bar seats, and embark on a pan-Asian tour by scarfing down the best pork belly bun I’ve tried since 2008 (at Momofuku Noodle Bar in New York) and some mind-bogglingly-good haricots verts tossed in a spicy soy, yuzu, and Sichuan pepper sauce—truly out of this world! These two exceptional joints complete the shortlist of three new 2019 spots vying for the title of Priceless Paris Best New Bistro.

A great binchōtan(charcoal cooking)-obsessed restaurant where everything is absolutely delectable, from yakitori and pasta to desserts—Le Rigmarole. 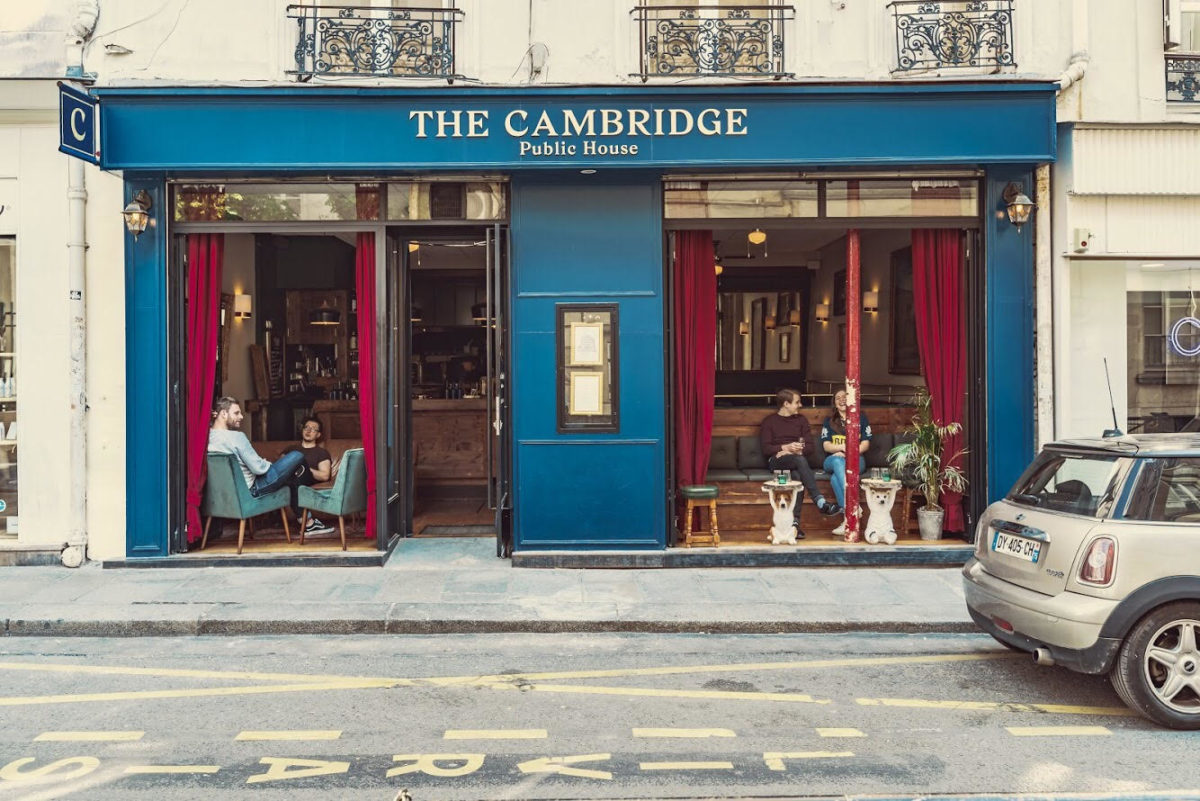 The Cambridge Public House has owners from both sides of the channel—one from France, the other from the U.K. 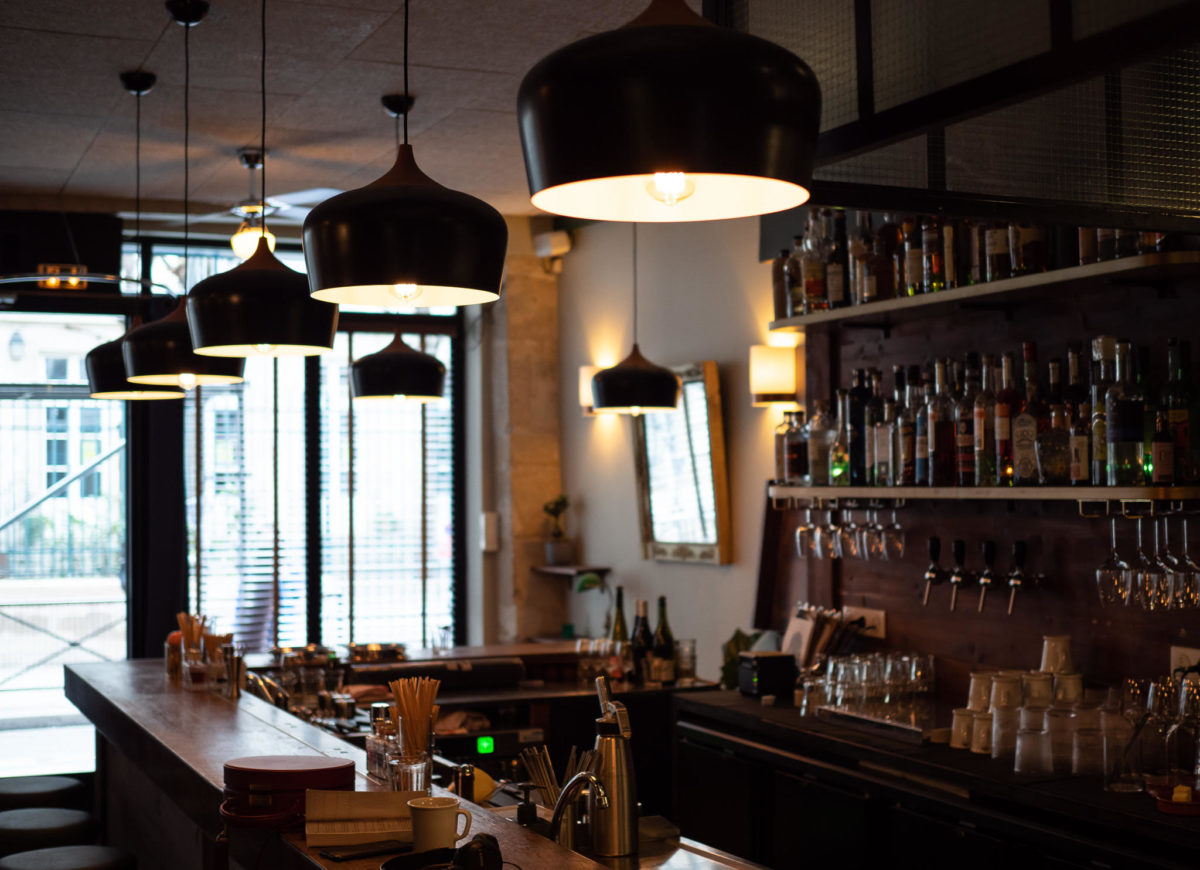 The Cambridge combines the laid-back vibes of an English pub with the flair of a Parisian bar. 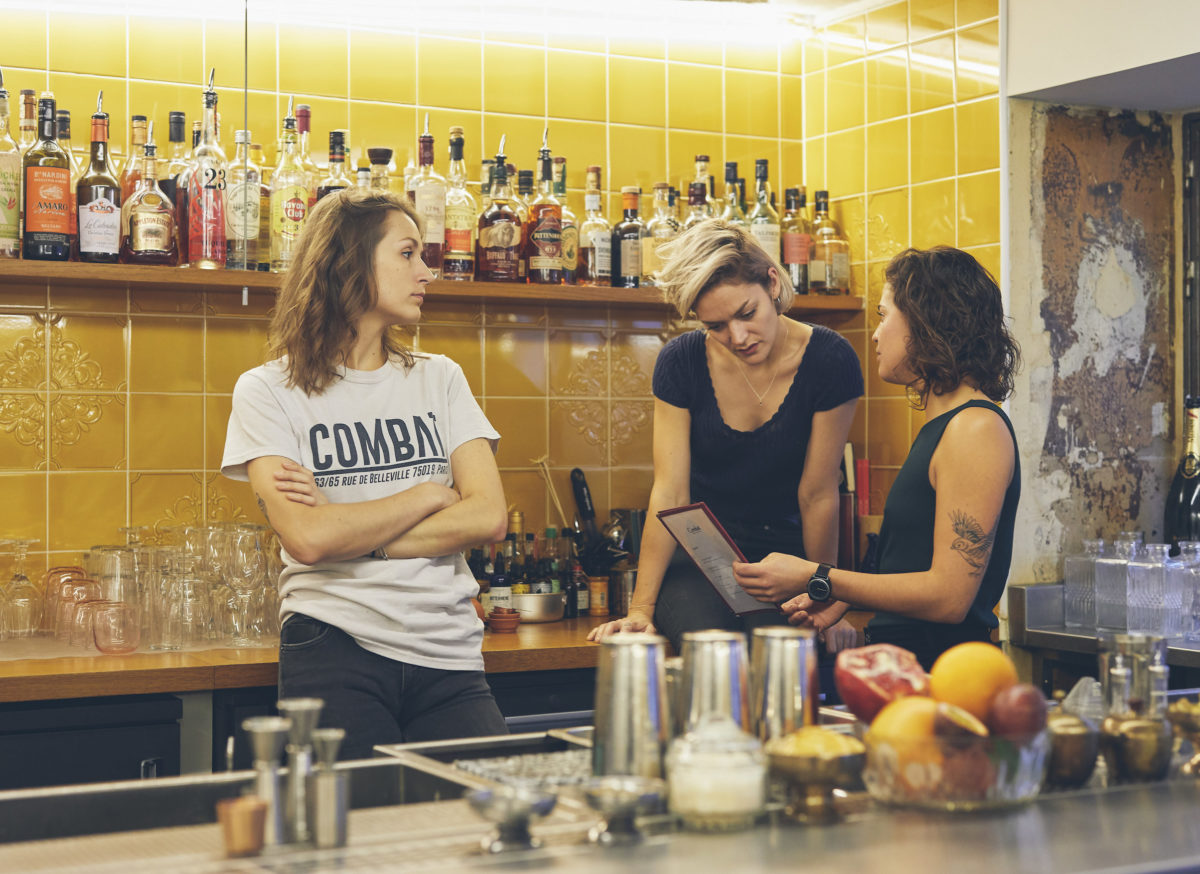 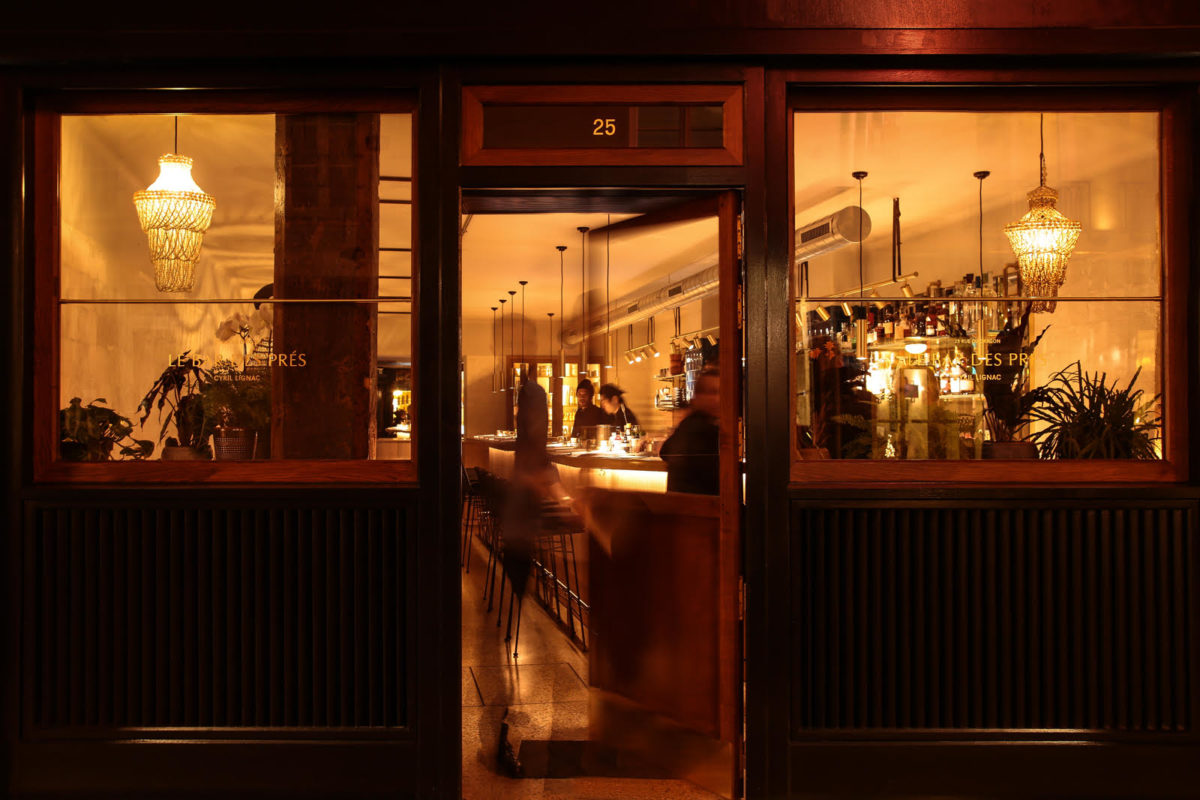 Le Bar des Prés is renowned for its excellent cocktails. 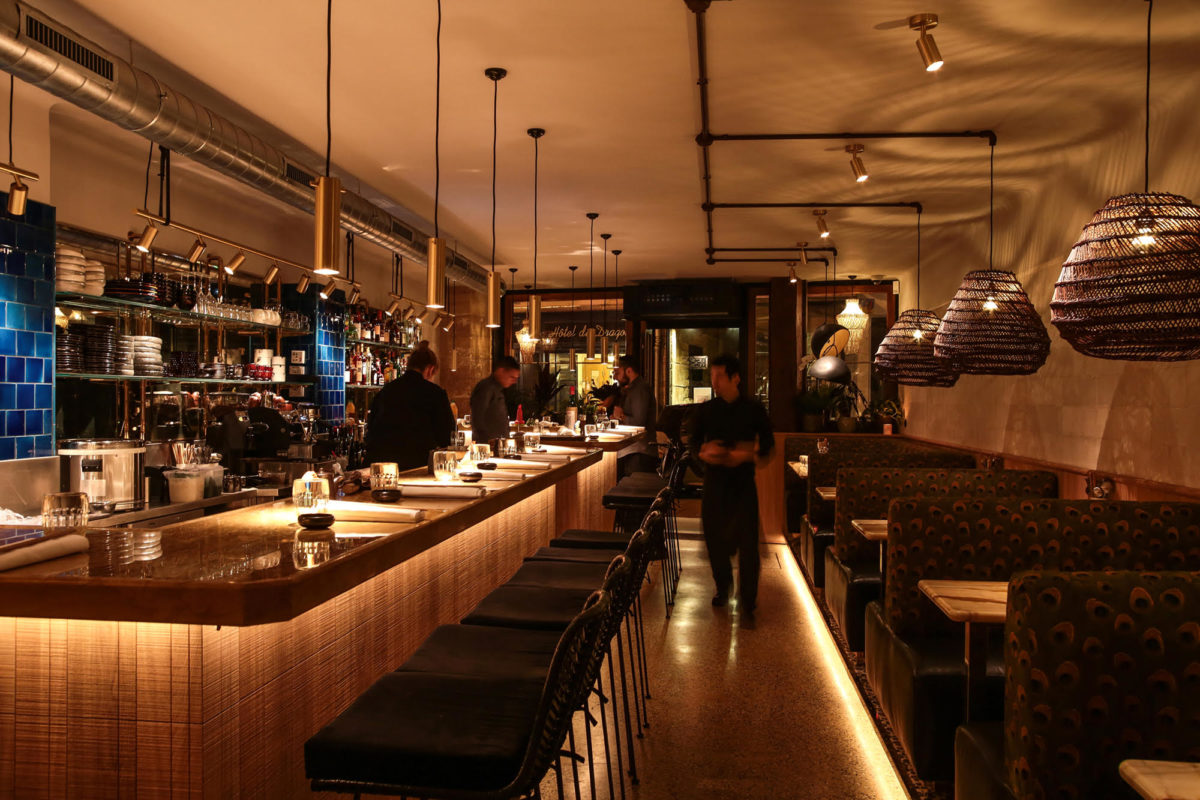 On the right bank of la Seine, Déviant, Pierre Touitou’s creative tapas and natural wine bar is perfect to eat something with a bit of personality after a show. On the left bank of la Seine, Le Bar des Prés by Cyril Lignac is known for its cocktails, California rolls with royal crab and mango, and the crunchy curried crab and avocado tartlet.

As for cocktail bars, one of my favorites is Combat in Belleville, located between a Thai restaurant and a Chinese wholesale shop. It’s owned and run by women only, including owner and head bartender Margot Lecarpentier (ex-Experimental Cocktail Club). Her bar isn’t lacking any panache, and the cocktails are always unique; I often order the Frais Maison made with vodka, gin, homemade bergamot syrup, lemon juice, and cucumber.

I also really like the more recent Cambridge Public House that opened this year in the heart of Le Marais. The owners, Hyacinthe Lescoët and Greg Inder, are from Brittany, France and Great Britain, and you really feel like you’re in an English pub drinking a Pimm’s, eating cheese and onion pasties—only hipper. 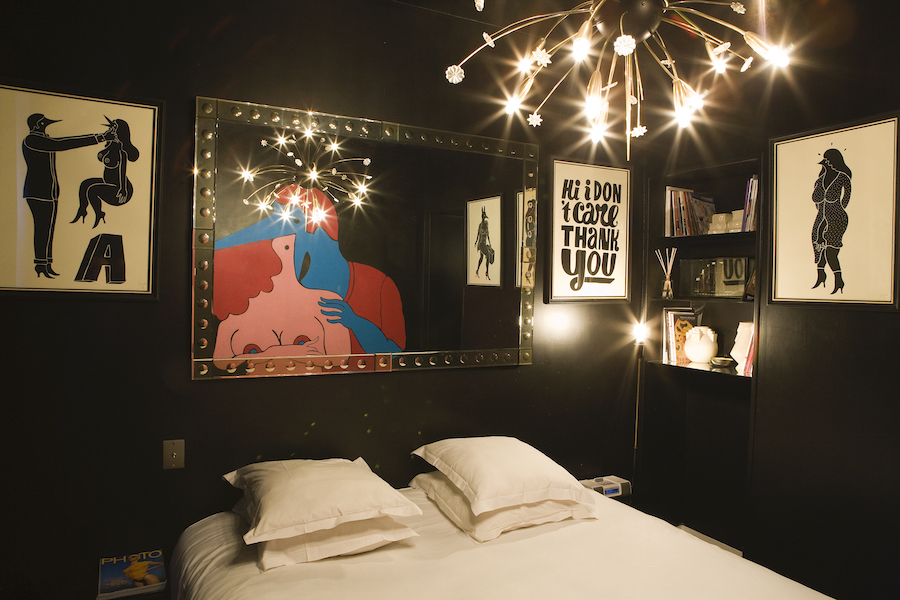 Inside a chic suite at the Hôtel Amour.

Where to Stay in Paris, France

I really like the suite at the top of Les Bains, a famous old nightclub. It has an insane terrace and an outdoor shower—practical in the summer. Similarly, there is also the 1923 Suite on the rooftop of the Maison Albar Hôtel Le Pont Neuf, which has 180-degree views of Paris and is perfectly, centrally located.

What to Read Before a Trip to Paris

The last Parisian writer to really move me was Simon Johannin. One of his books, Nino dans la Nuit, takes place in Paris, but it isn’t his best work. Although that book may not be translated yet, I imagine that Vernon Subutex by Virginie Despentes has been, and the depiction of Paris is quite contemporary.

Paris is quite small compared to other big cities in the world. It’s important to get lost in the City Of Lights, and in order to do so, I recommend walking a lot and using a paper map—not Google Maps, which is great in a hurry but doesn’t give you a full geographical view of the city. I would also recommend taking the subway or bus, the fastest modes of transportation, in which case Google Maps is your friend.

For a less splashy budget, I still have a soft spot for the Hôtel Amour. For a medium budget, I would suggest Hôtel Providence, where every room has a mini cocktail bar.

If You Have Extra Time

Check out Plein Air, a hidden flower garden in the 20th arrondissement, where I like to buy flowers or even seeds from the owner, Masami Charlotte Lavault.