5 Classic Road Trips Around the World (and Their Hidden Detours)

In 2020, road trips are a traveler's best friend.
IndexHand Luggage Only

The duo behind travel blog Hand Luggage Only take us on a tour of quintessential road trip routes around the world—and reveal the gems you might otherwise miss along the way.

There’s something truly unparalleled about road-tripping as a way to travel. Not only is it a great way to delve into a new region, but it’s also one of the easiest ways to discover new ground completely at your own pace.

That very sense of freedom and discovery is exactly what has made the road trip so beloved since its humble beginning.

It was 1888 when Bertha Benz, wife of famous automobile engineer Carl Benz, took off across Germany in the family’s shaky, three-wheeled Benz Patent Motorcar (and did so unbeknownst to her husband). She was on a mission to promote the world’s first practical car as a viable means of personal transportation—little did she know she was starting a revolution in how we experience the world. Although hers was a relatively tame journey—66 miles from Mannheim to Pforzheim, at a speed of just 10 mph—it was a new way to travel that caught the world’s attention.

The beginner’s guide to planning a road trip→

Nowadays, road trips are much breezier than they were in the 19th century (and thank goodness), but our longing to voyage by road is as strong as ever. Since that first recorded road trip, a flurry of newly established routes and historic trails have captured the imagination of travelers around the world, from European hits like Ireland’s Ring of Kerry to Route 66 in the U.S.A.

Although the ongoing pandemic calls for extra consideration—domestic drivers should play it safe, while international travelers may need to wait—there is a silver lining: Road trips take quite a bit of planning, so any delay between dream and departure equals extra time to perfect your itinerary and collect additional inspiration for future trips. With a thirst for travel and a driver’s license in hand, there are copious winding and meandering routes too enchanting for any travel aficionado to miss. 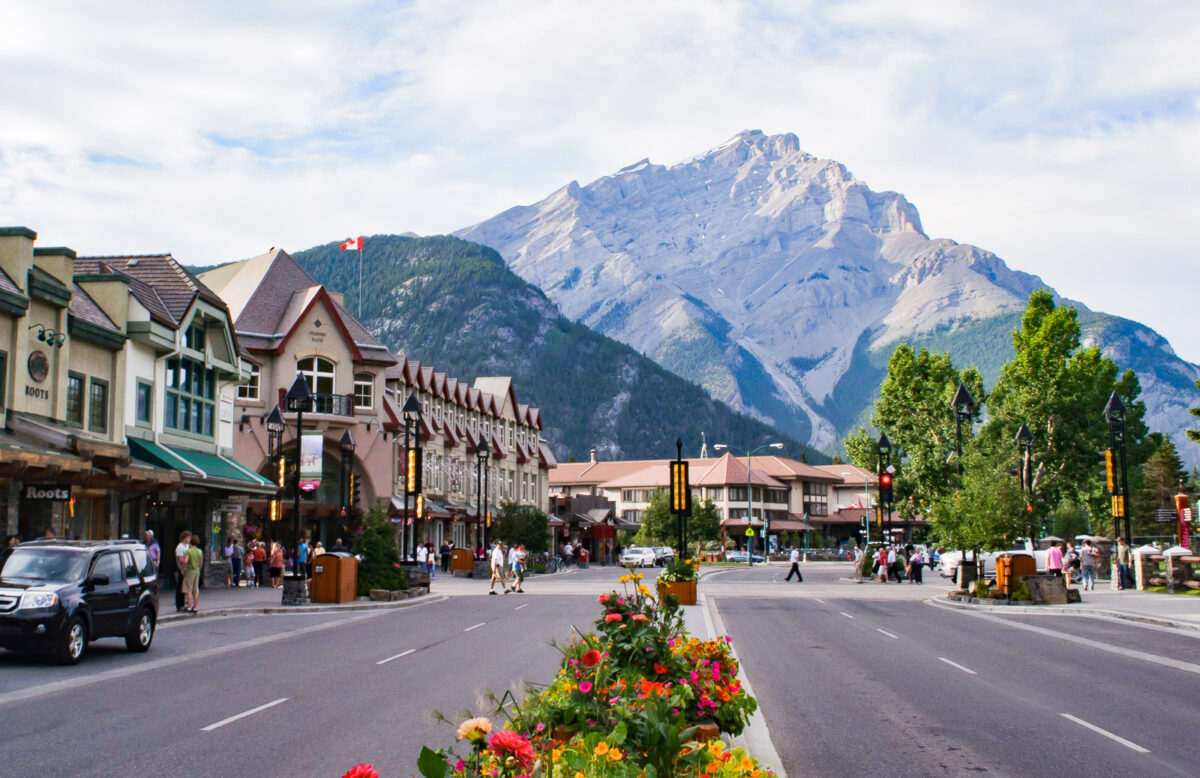 The mountains of Western Canada enchant road trippers year-round. Photo by In Sappho We Trust.

Length: 18–22 hours nonstop; longer in winter due to icy conditions

Departing from Vancouver, British Columbia, you’ll actually need around 14 days to drive to Calgary, Alberta. Of course, there are much swifter routes, but you’ll likely want to check out some of both provinces’ most iconic spots, all of which require time to fully absorb. If you’re planning a cold-weather road trip, be sure to get some winter tires; Canadian roads can get pretty icy outside of the cities.

Along the way, stop off in Whistler to show off your skiing prowess, get a glimpse of the mighty Helmcken Falls while driving toward Jasper, and visit Maligne Canyon, where you’ll uncover frozen waterfalls. Next, stop in Banff and head up into the Canadian Rockies for incredible vistas from one of the world’s most recognizable mountain ranges.

Detour: After making it to Calgary (and dropping off your car!), spring for one of the city’s best cocktail spots and eateries, Native Tongues, which serves the tastiest Mexican dishes outside of Mexico.

How to visit Vancouver from the comfort of home → 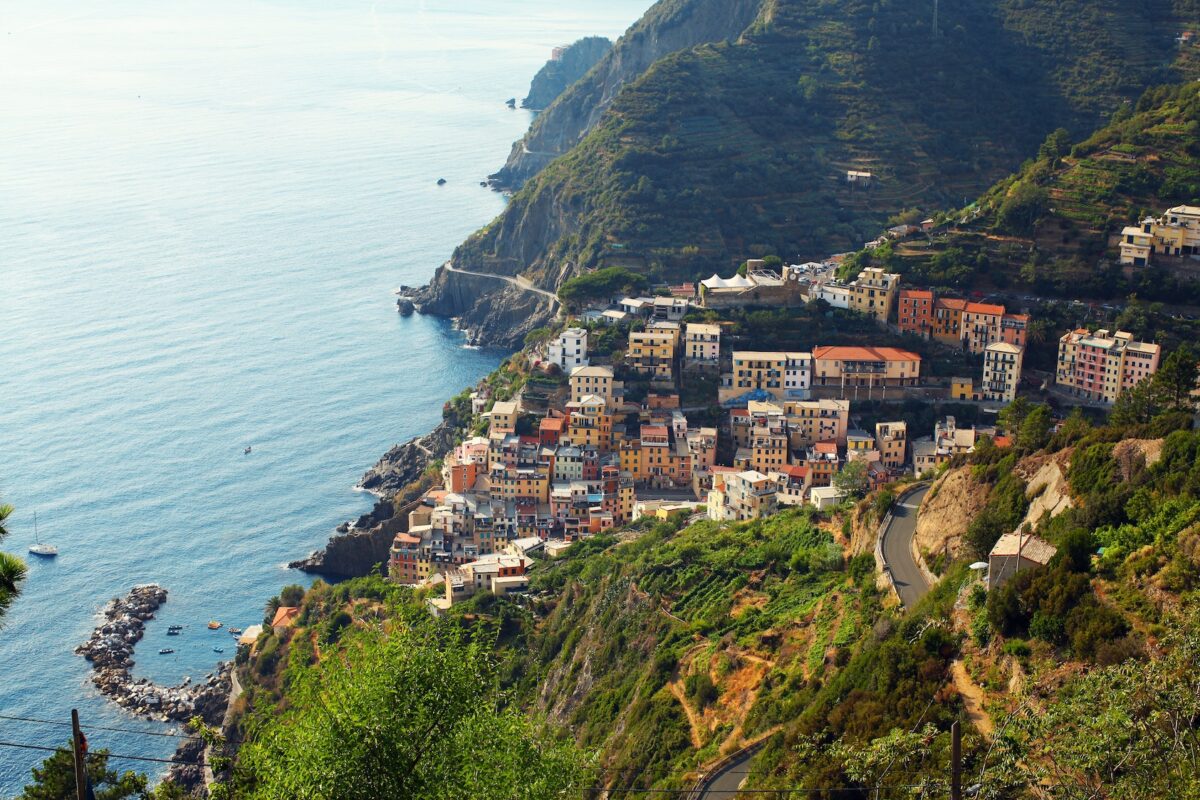 A car is the perfect way to explore the tiny Italian villages that hide in the mountains of Cinque Terre. Photo by Ilya Orehov.

2. The Spine of Italy

Road-tripping the spine of Italy is a must for anyone who wants a healthy mix of culture, history, and—of course—good food. Departing from either Verona or Milan, you’ll drive south through some of Italy’s most beloved regions, including Bologna, Pisa, and Florence. (Once you’ve reached each city, it’s best to park your car and explore on foot.)

In La Spezia, hop out of the car and onto a ten-minute train that’ll take you into the mountainous towns of Cinque Terre. Alternatively, if you don’t fancy leaving the car, head through the Tuscan countryside toward San Gimignano and then south to Orvieto, where you’ll be able to dine in family-run restaurants that are just so quaint.

As you head closer to the coast, drive on over to the ruined city of Pompeii, where you can still wander the ancient streets. (Just make sure to arrive early if you want to avoid any potential crowds.) Finally, the crown jewel of this road trip has to be the Amalfi Coast, where you’ll experience some of the most dramatic scenery in all of Italy.

Detour: Remember to venture off the main roads, too. Although they’re fast and efficient, you’ll end up missing lots of the little hilltop villages—including Montepulciano (totally stunning and known for tasty wines), Lucca (with the centuries-old Guinigi Tower), and Fosdinovo (easy to visit once leaving La Spezia)—that make Italy such a special country for a road trip.

Why winter is the best time to visit Lake Como → 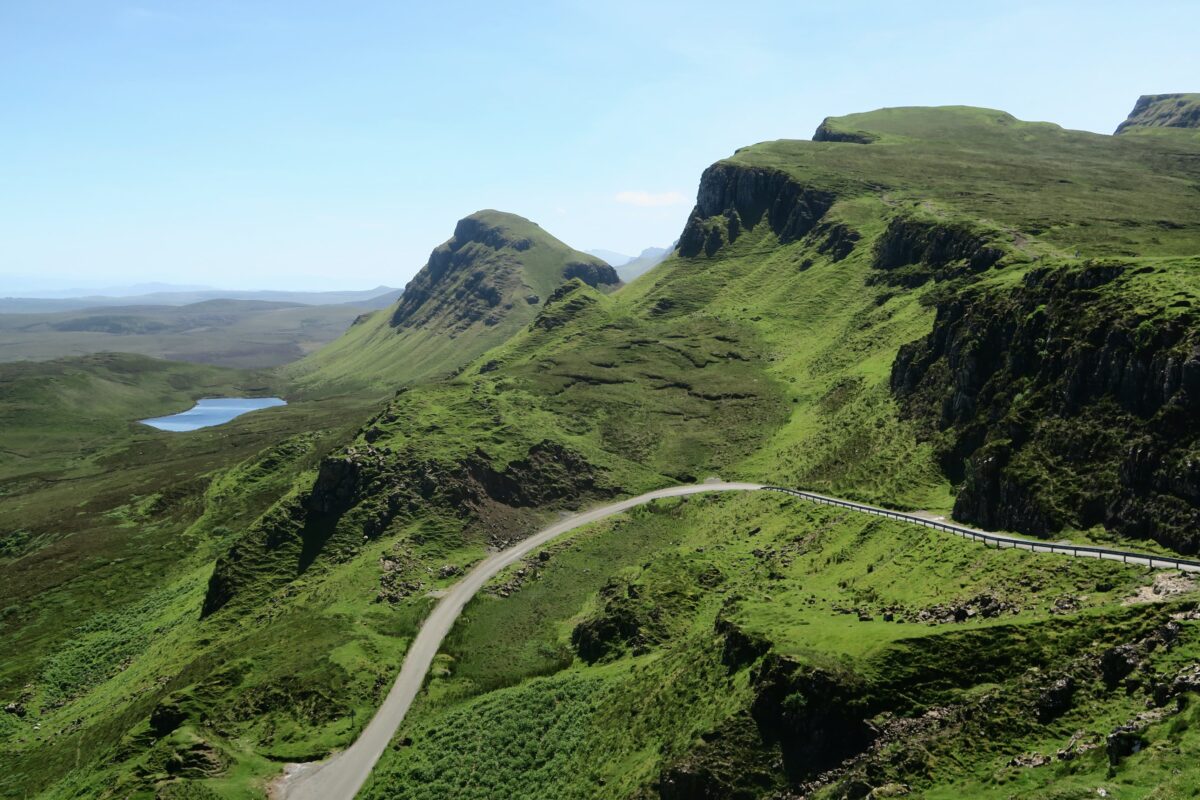 The natural beauty of Scotland is unrivaled. With little villages, hidden coves, and dramatic mountain ranges dotting its roads, this region makes journeying by car so very special.

After arriving in Inverness, head further west, where you’ll take in some of the best views in the Highlands. Along the way, follow the North Coast 500 route, which spans over 500 miles of unspoiled, picture-perfect Scottish coastline.

As you traverse this historic region, explore some of the Highlands’s most bewitching and awe-inspiring spots: On the west coast (opposite Portree on the Isle of Skye), you’ll come across Loch Torridon, which is utterly serene. Just nearby, stop off in Lower Diabaig, a wee little fishing hamlet right on the mouth of the loch. Here, you’ll find Gille Brighde, a cozy, family-run restaurant that serves up a hearty Scottish broth. Along the way, further south, make sure to drive through Bealach na Bà and take in the view; created thousands of years ago by a receding glacier, the area is home to one of the most dramatic drives you can experience in all of Scotland.

Detour: No road trip through the Scottish Highlands would be complete without a castle or two! Make a detour to the enchanting Eilean Donan Castle, which sits proudly on its own tiny island in the middle of Loch Duich in the western Highlands.

Why we’re in love with the Scottish Highlands → 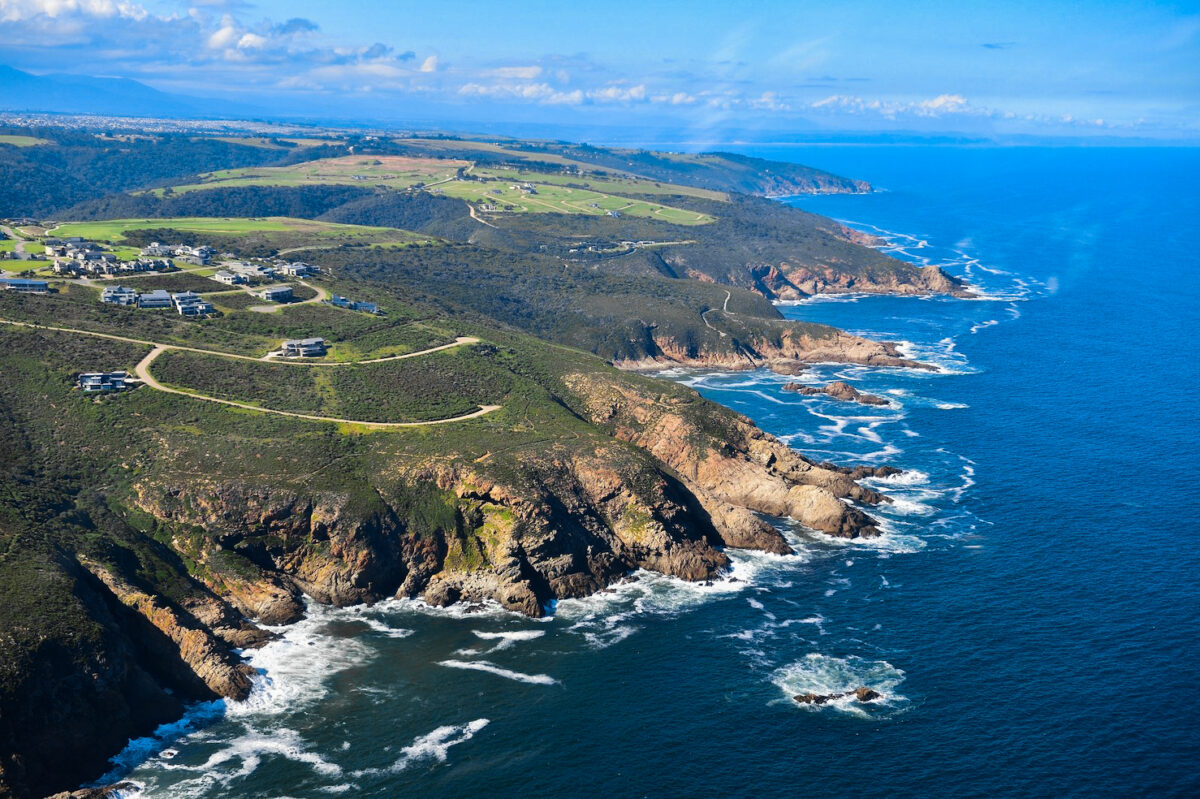 Since the Garden Route touches many of South Africa's major cities, travelers can pick their starting point at will. Photo by South African Tourism.

Stretching along the Cape of South Africa between Tsitsikamma and Whitsand, the Garden Route is one of the most exciting road trips on the African continent, as well as the best way to discover South Africa’s most beautiful spots. This route is especially well worth visiting in the summer months when the weather is a little warmer.

Most road trippers pick up their cars in Cape Town or another major city along the Garden Route—however, it doesn’t really matter where you begin, as long as you plan for what you’d like to see most. Along this route, beach-loving travelers can discover places like Plettenberg Bay and Mossel Bay. If it’s wildlife you’re after, head to Boulders Beach and spot the hundreds of penguins that call the area home. Afterward, drive toward Hermanus and keep your eyes peeled on the shoreline; it’s one of the best places in the country for whale spotting.

Detour: If you visit in September, make sure your stop in Hermanus coincides with the annual Hermanus Whale Festival. It’s a celebration of the calving season, a time of year integral to the whale populations in the area. 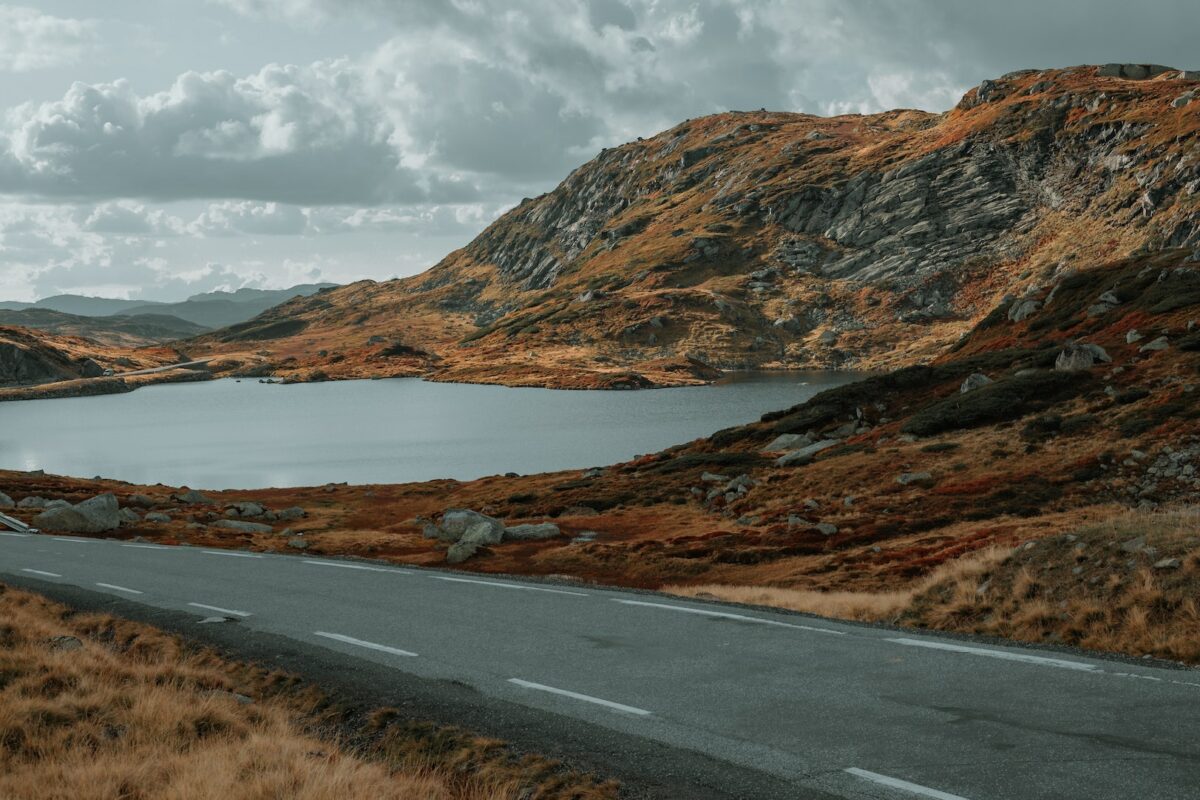 There are few road trips as tranquil as one that'll take you through the fjords of Norway. Photo by Chris Henry.

Absolutely beautiful and incredibly dramatic, Norway is an excellent country to explore by road. Here, driving routes offer the most intimate way to experience a serene, transcendent landscape that’s gone untouched for thousands of years.

For a quintessential Norwegian road trip, make sure to take in the fjords that make the countryside here so magical. Driving from the picturesque coastal city of Ålesund, head inland and follow the shore of the Storfjord, which stretches through Norway’s Sunnmøre region. After about two or three hours of driving through some of earth’s most tranquil scenery (as well as a few car ferries over the fjords), you’ll reach Geiranger, one of the most beautiful places in western Norway.

Detour: From Geiranger, be sure to drive up to the top of the mountains for the Dalsnibba viewpoint. With serpentine bends at high altitudes, this drive is as much about the journey as the destination.