Welcome to Travel Crush, where our editors pine over places we’ve yet to explore, why they intrigue us so, and what we dream we’d accomplish once we get there. This week’s crush is Tromsø, Norway.

A not-so-secret secret about me: Despite my childhood in the humid American South, I am a wannabe Nord. Although around this time of year most people begin plotting their escape from the impending cold (Bermuda and Lake Como, be warned: Winter is coming), I’m the exact opposite. Dropping temperatures make me want to travel further north to places where harsh winds crack across the face like a whip, where one can drive for ages without seeing another soul, and where the environment—mere degrees from the top of the Earth, where the sun hides away for weeks at a time—shapes entire cultures and ways of life.

One of the more accessible places to fit this description, Tromsø, Norway sits 217 miles above the Arctic Circle. Humans began populating the region around 11,000 years back when the current Ice Age (yes, one we still live in!) began. After the city’s founding 200 years ago, it quickly became known as the “Gateway to the Arctic,” inviting curious tourists to explore the cold, vast, and incredible North. 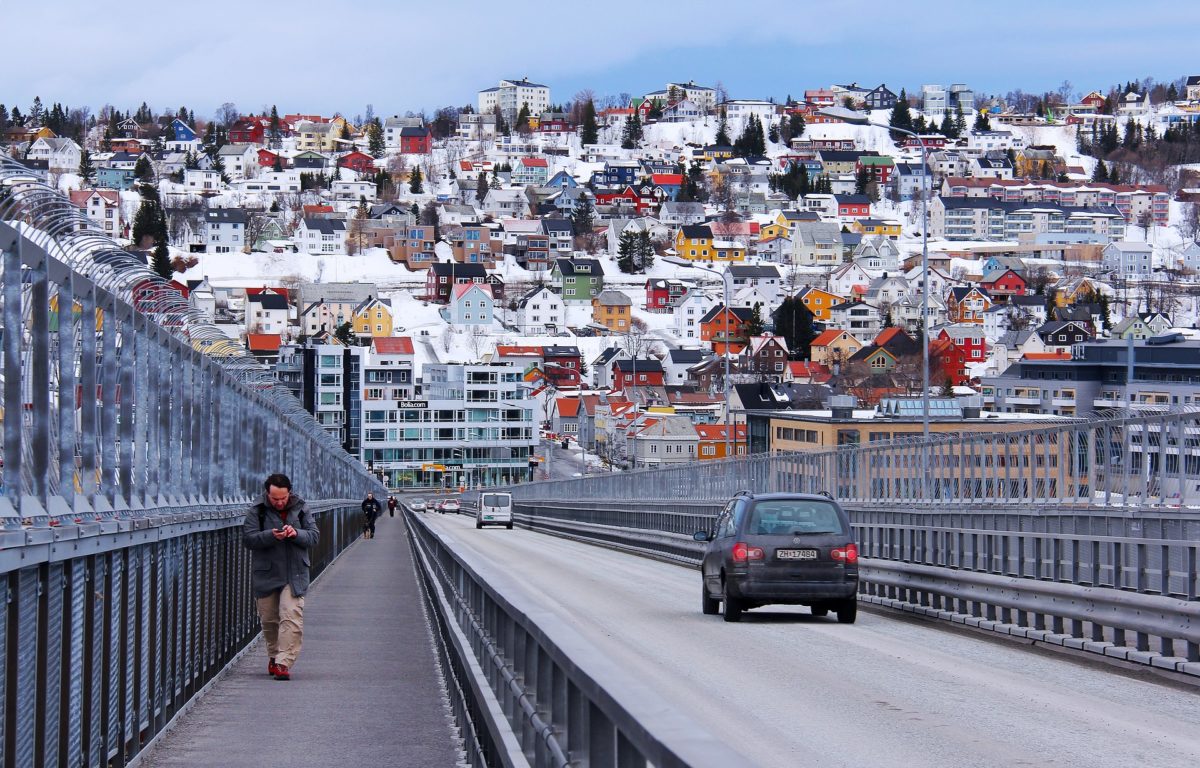 A view of colorful Tromsø from across the city's bridge.

Part of me wonders if I’m experiencing “climate melancholia,” the desire to see a place before it’s forever damaged—or completely destroyed—by global warming. Unless governments and major corporations work to enact change, it’s only a matter of time before the Earth’s dialed-up heat has irreversible effects on environments like these.

But I also believe there’s something truly special about venturing to the furthest reaches of our planet. The romantic in me lusts after landscapes that have yet to be overrun by crowds and manmade noise common to beaches and cities. In other places, sure, I could relish in drinking fruity cocktails on white sands or people-watching on the streets of famous capitals. But instead, I choose this: silence, snow, and a retreat from the commotion of my everyday life in NYC to one of the world’s most remote getaways. 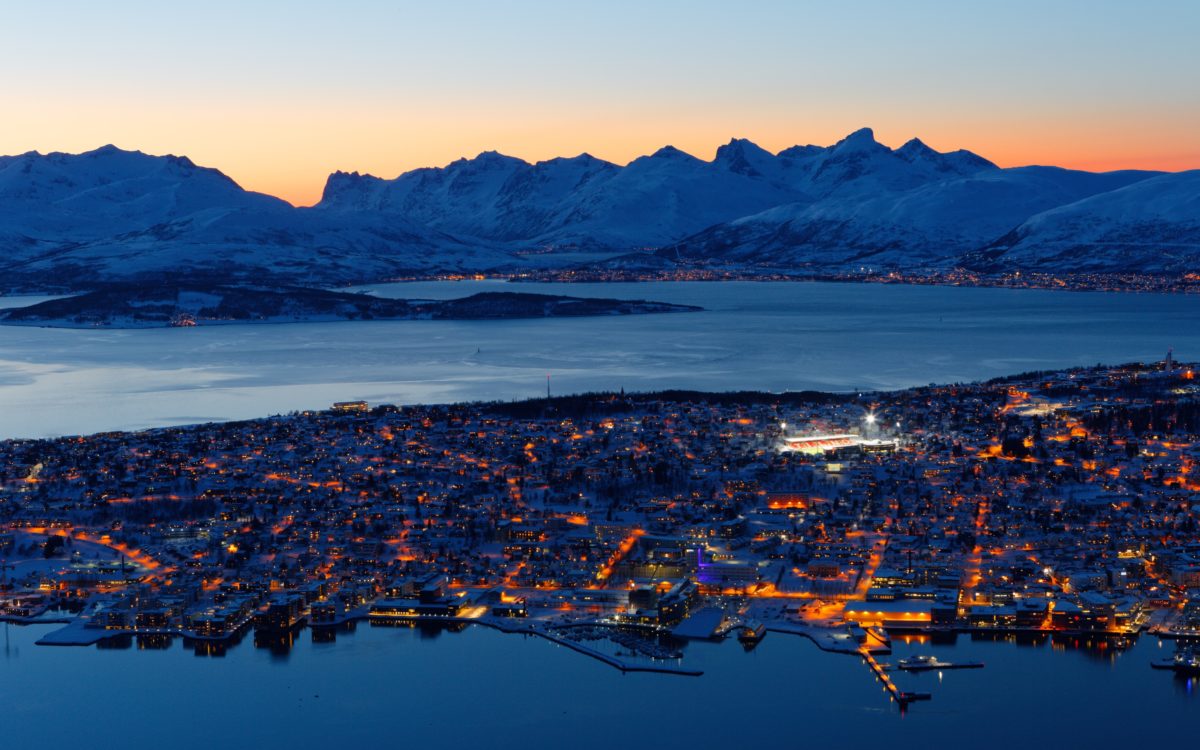 Tromsø restaurants specialize in seafood dishes made with ingredients fresh from the waters of the Arctic.

One of the best parts of exploring such a unique corner of the world is getting to sample ingredients you’ve never tried before. Mathallen, a restaurant that sits just a few blocks inland of the coast, presents the perfect opportunity to do so. With seafood pulled fresh from the freezing waters of the Arctic each day, they create seasonal and traditional Norweigan meals with modern twists. On my hit list: salmon, herring, and sour milk ice cream. (I’d also encourage red meat-eaters to try the reindeer—as close as you may feel, I promise you’re not close enough to the North Pole for Santa to find out.) 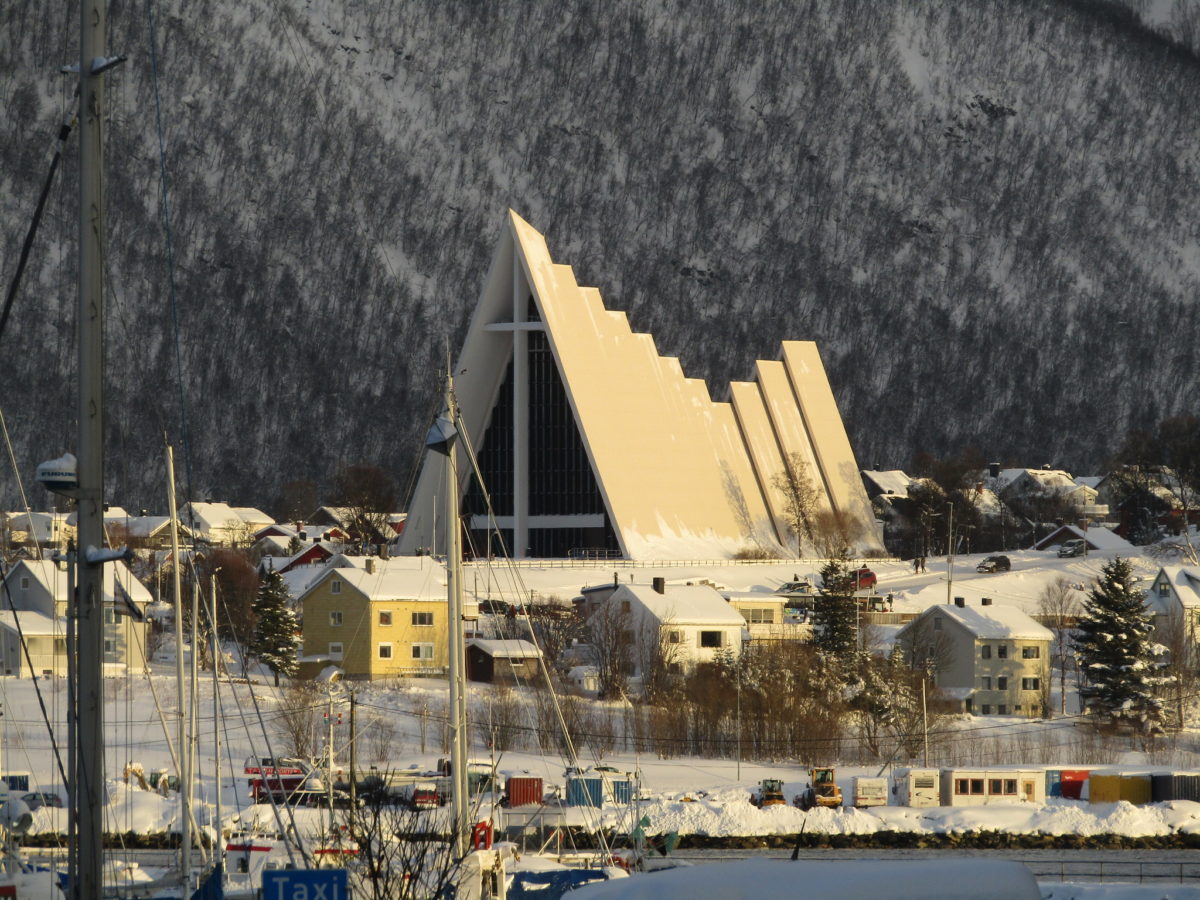 The Arctic Cathedral, built in 1965, is the most iconic building in Tromsø. 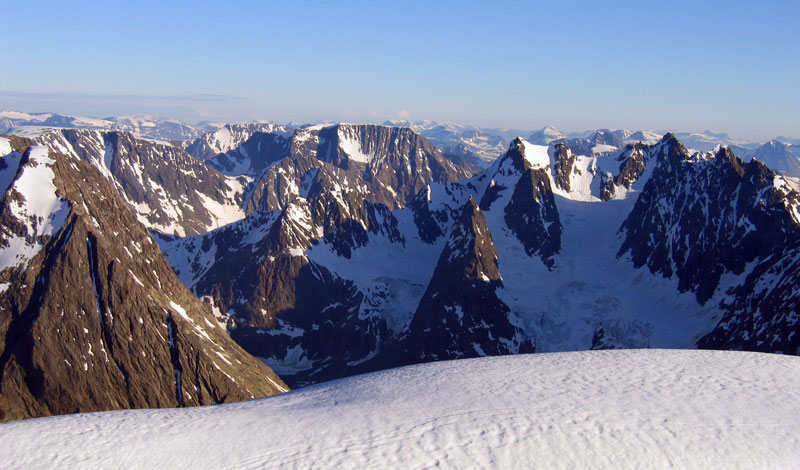 The Lyngen Alps lie just beyond the city.

Stay in the City Center; Then Venture to the Arctic Countryside

My trip to Tromsø requires two different types of accommodation. In Tromsø’s city center, Hotel With is an easy walk to all of the main attractions and offers views of the mountain Fjellheisen, the Tromsø Bridge, and the Arctic Cathedral, an architectural masterpiece that sits across the water. Then, two hours from Tromsø in the Lyngen Alps, Koppangen Brygger is my chance to live out all my Arctic fantasies: a stay in a quaint (but modern!) fisherman’s cabin with mountain and sea views; snowshoeing, dogsledding, post-hike saunas; and—the pièce de résistance—viewing the Aurora Borealis from my cabin’s private outdoor hot tub. 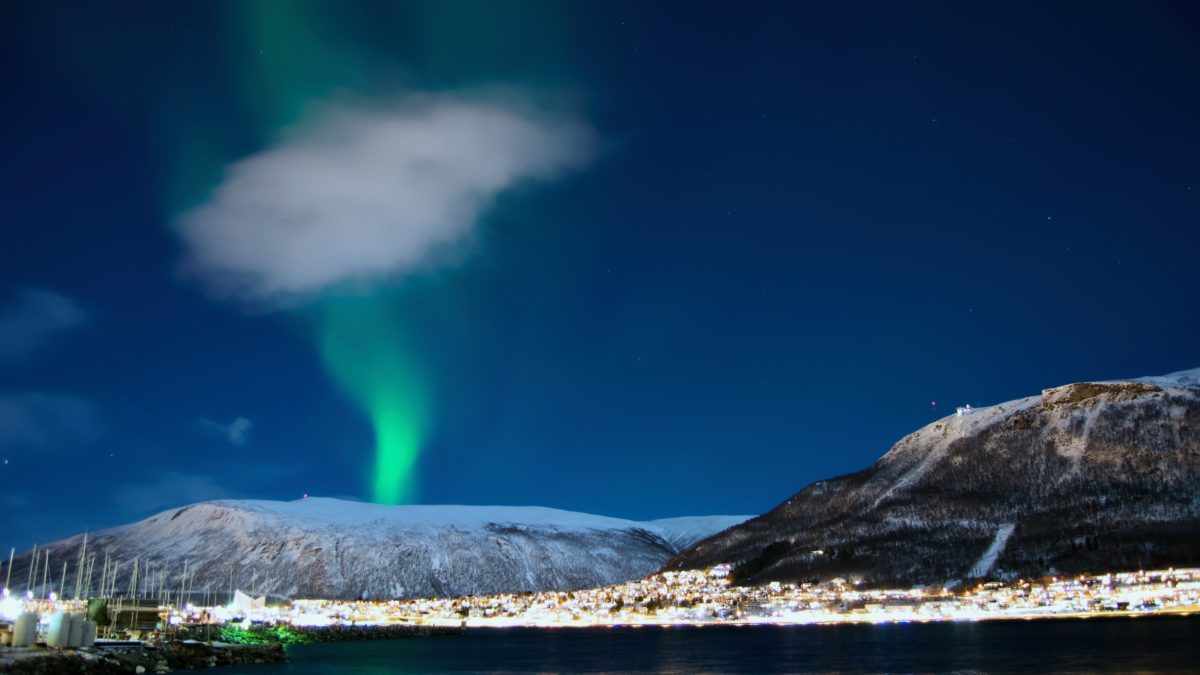 You can spot the Aurora Borealis above Tromsø starting in late September. 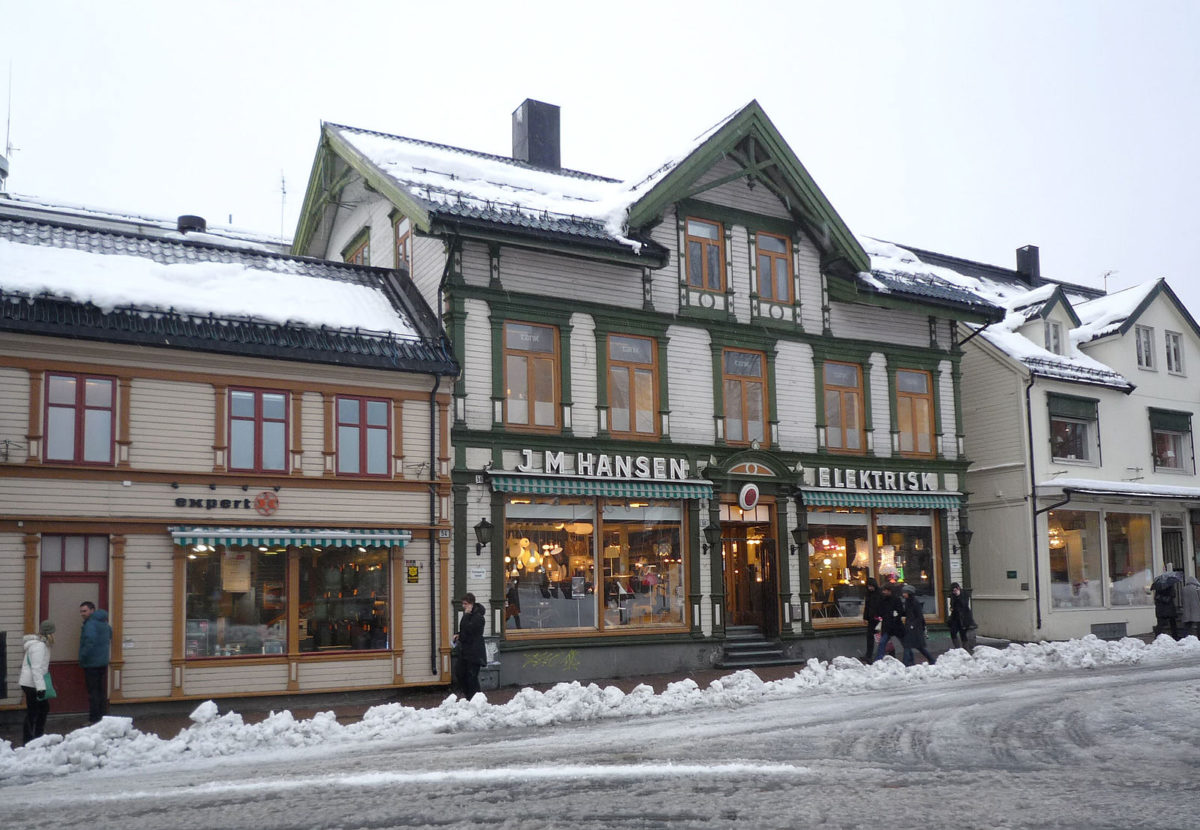 Along Storgata, the city's main street. 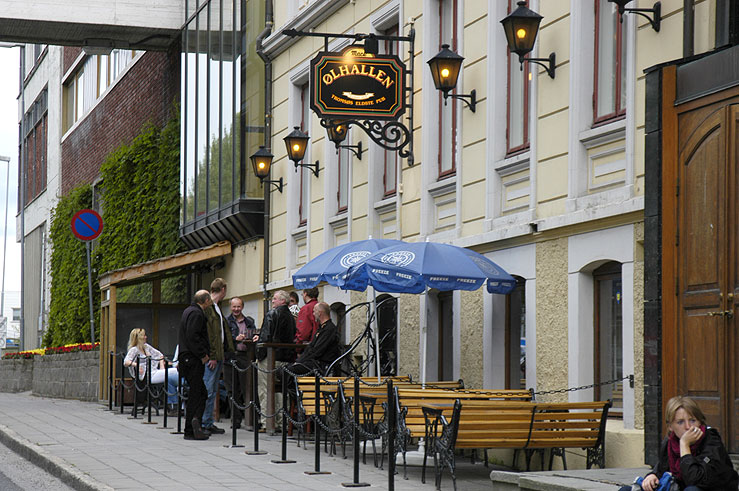 Outside Ølhallen, the oldest pub in Tromsø.

Tromsø becomes especially popular for Northern Lights-spotting during winter, so visiting in late September to early October when Aurora Borealis season begins may be the way to beat the crowds. For such a small city, Tromsø also has a surprisingly hearty nightlife (perhaps necessary for a city that doesn’t see the light of day for months at a time in winter). With a relatively large population of young people, a Friday or Saturday night stroll along the main street, Storgata, is sure to come with adventures nearly as exciting as a hike through the fjords.