5 Classic Road Trips Across the U.K. and Ireland

There’s no road trip like a British Isles road trip—and these five classic routes in England, Ireland, Northern Ireland, Scotland, and Wales are here to prove it.

Although they may be islands, The U.K. and Ireland are the perfect destinations to do a road trip of a lifetime. There are never-ending back roads for thrill-seekers, history lovers, and all those in between. From the thrilling Scottish Highlands to the stunning coastline of Southern England, as well as the rural roadways of the Emerald Isle, you’ll be enchanted by pretty small towns, stunning mountain ranges for hiking, lakes, and ancient ruins that reveal the history of forgotten times.

With so many endless routes of spectacular scenery and attractions that are begging to be explored, it will be hard to narrow down what path you want to embark on for your road trip. Here are five can’t miss road routes that will fulfill your road trip adventure dreams. Whether it’s a short drive or a long leisurely trip with many breaks along the way, that’s all up to you— there’s nothing better than the freedom of the open road. 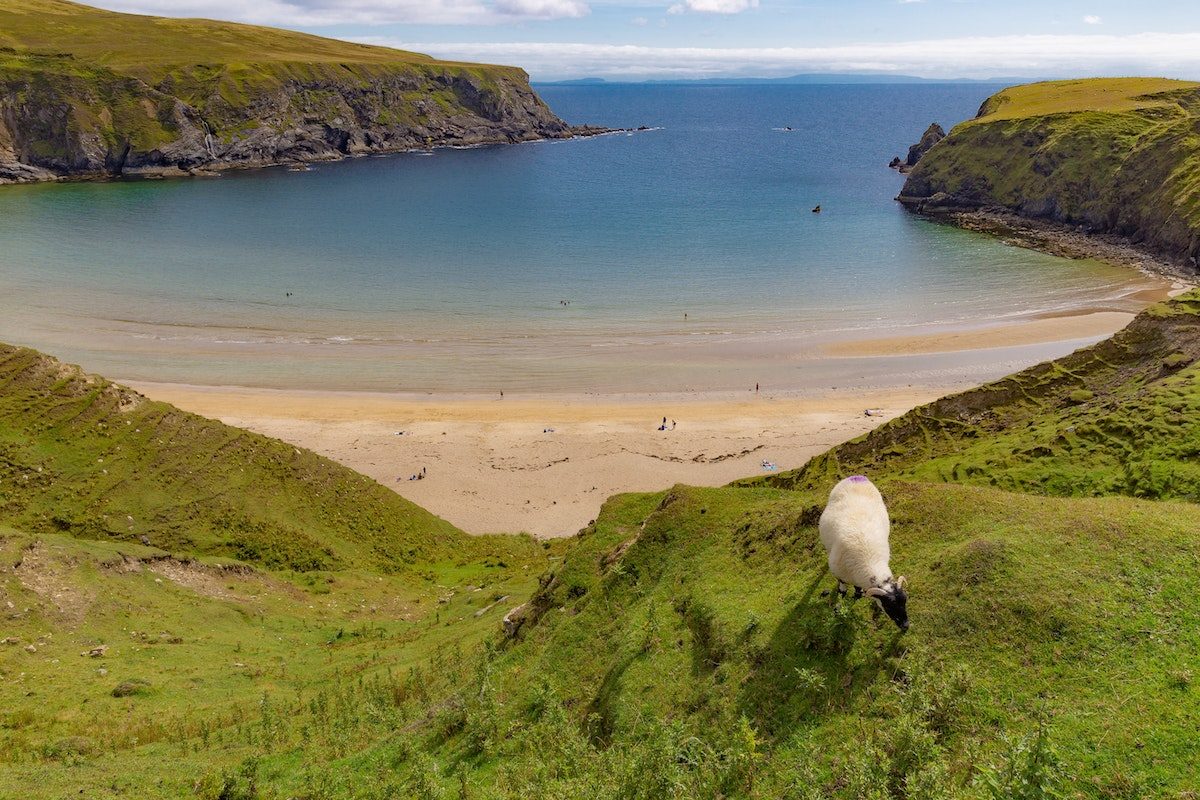 Not ba-ah-ahd. Photo by Brian Kelly on the coast of Donegal, Ireland.

The Wild Atlantic Way winds along the west coast of Ireland for 1,600 miles from Donegal to West Cork. Down this spectacular route, you’ll be engrossed by the beautiful landscapes, traditional culture, and loads of yummy seafood for your dining pleasure.

Skip the Cliff of Moher and instead check out of Sliabh Liag (Slieve League), the highest sea cliffs in Europe. Stop by Killybegs Seafood Shack to refuel with some fish and chips after your hike up the cliffs. Catch some waves in Bundoran, the surf capital of Ireland, with a surf lesson or board rental at Bundoran Surf Co.

Afterwards, make a pitstop at the Salty Fox, a family-run coffee shop with delicious homemade food and baked goods to take with you as you walk along the Rougey Cliff Walk. And because you can’t forget souvenirs, Buoys and Gulls is the place to shop for some lovely Irish-made gifts to take home like soaps, jewelry, and teas. Further along this coastal route, is UNESCO World Heritage Site and former monastery Skellig Michael in Kerry, which you might recognize from the Star Wars movies.

Meanwhile, the only guide you’ll ever need to Dublin, Ireland→ 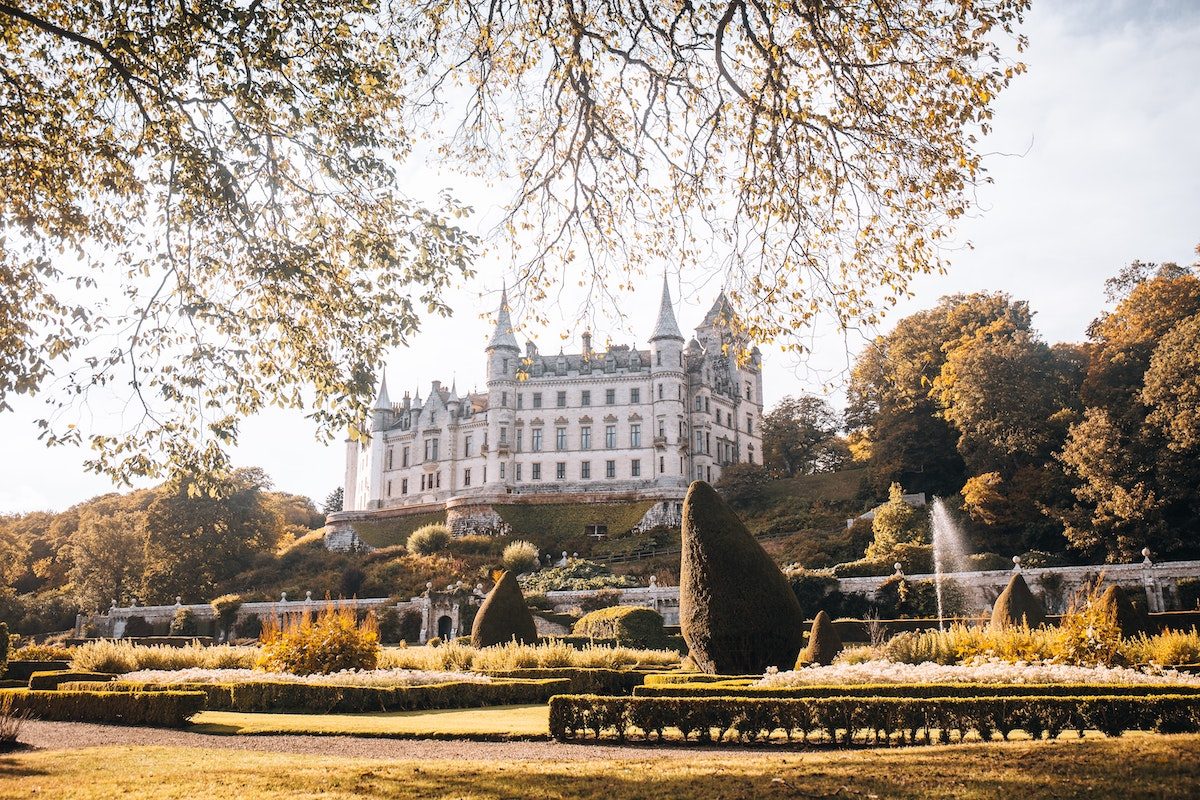 This Scottish road route consists of about 500 miles of spellbinding scenery that loops around castles, whiskey distilleries, beaches, and villages of the Scottish Highlands. Start your NC500 drive with Inverness, then travel towards the famous fingerpost at John O’Groats for the perfect photo opp.

Take a quick trip to Loch Ness to see if you can spot “Nessie,” as the locals call her. Don’t forget about Dunrobin Castle, a French Style Chateau that is Britain’s oldest continuously inhabited house that doubled as a hospital during World War I.

Journey south towards the stunning coastal village of Ullapool, which can double as a good homebase if you’re planning on exploring the surrounding countryside. Book a few nights at The Ceilidh Place, a literature-themed hotel with an art gallery, bookstore, and a music venue. Be sure to check out the Highland Liquor Company for a distillery tour and partake in a boozy tasting for the over 21 crowds.

If you’re one who wants to get in touch with nature, you can trek up to  Stac Pollaidh. It will take you about three hours, but the view is so worth it. Afterward, pop into the Seafood Shack for a take-away lunch of incredible seafood dishes. 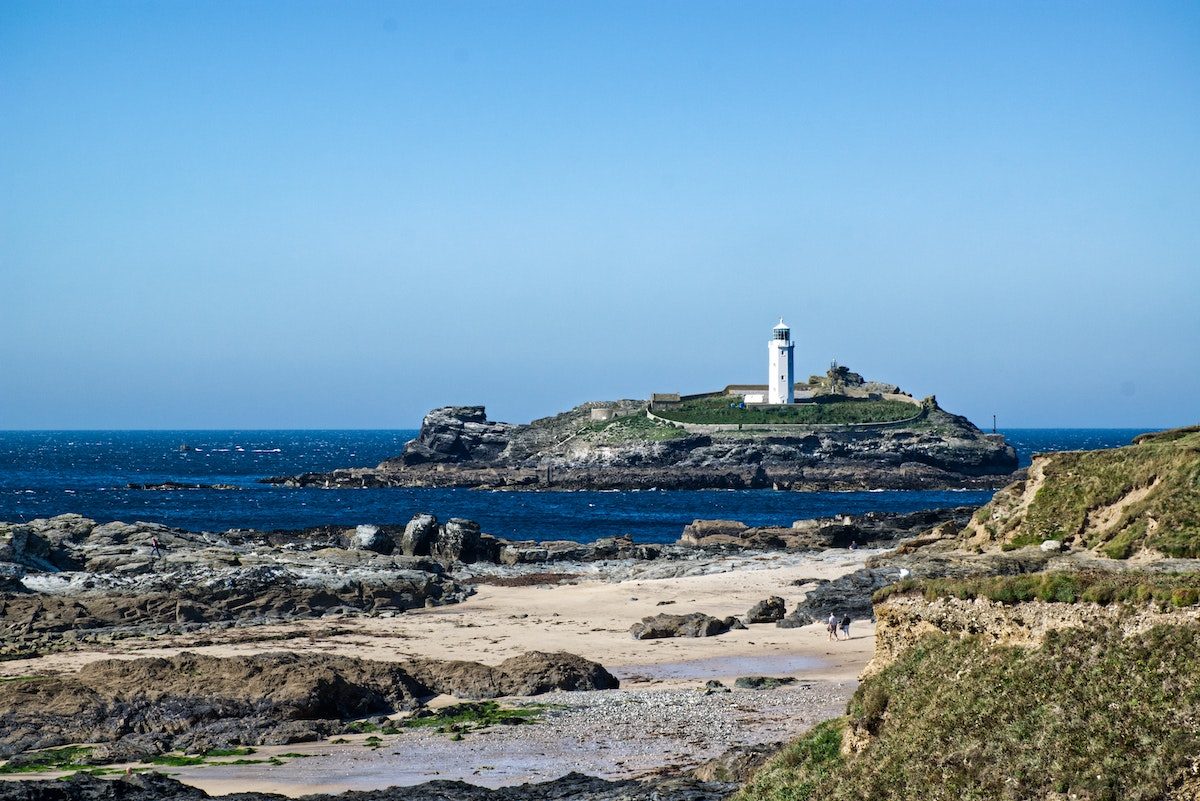 A lighthouse on Godrevy Beach in Cornwall—towering cliff-top walks nearby provide beautiful views of the sea. Photo by Keith Davey.

This photogenic road trip passes through the countryside of Somerset, Devon, and Cornwall. On this mesmerizing stretch of road, you’ll be treated with picturesque fishing villages, rolling hills, and rugged coastlines.

For the history buffs, immerse yourself in the legend of King Arthur and his court at Tintagel Castle as this is said to be one of Arthur’s fortress. Bypass Summerleaze Beach for Bude Sea Pool, a beautiful man-made tidal pool where you can swim without the worry of big waves or tides.

Explore The Lost Gardens of Heligan, a beautiful botanical garden that was lost to the world for nearly 30 years, but has since been restored to its beauty. Spend the night in the delightful fishing village of Portloe at  The Lugger Hotel, a former 17th-century inn revamped into a chic 4-star hotel with an award-winning restaurant that serves fresh seafood and local produce. 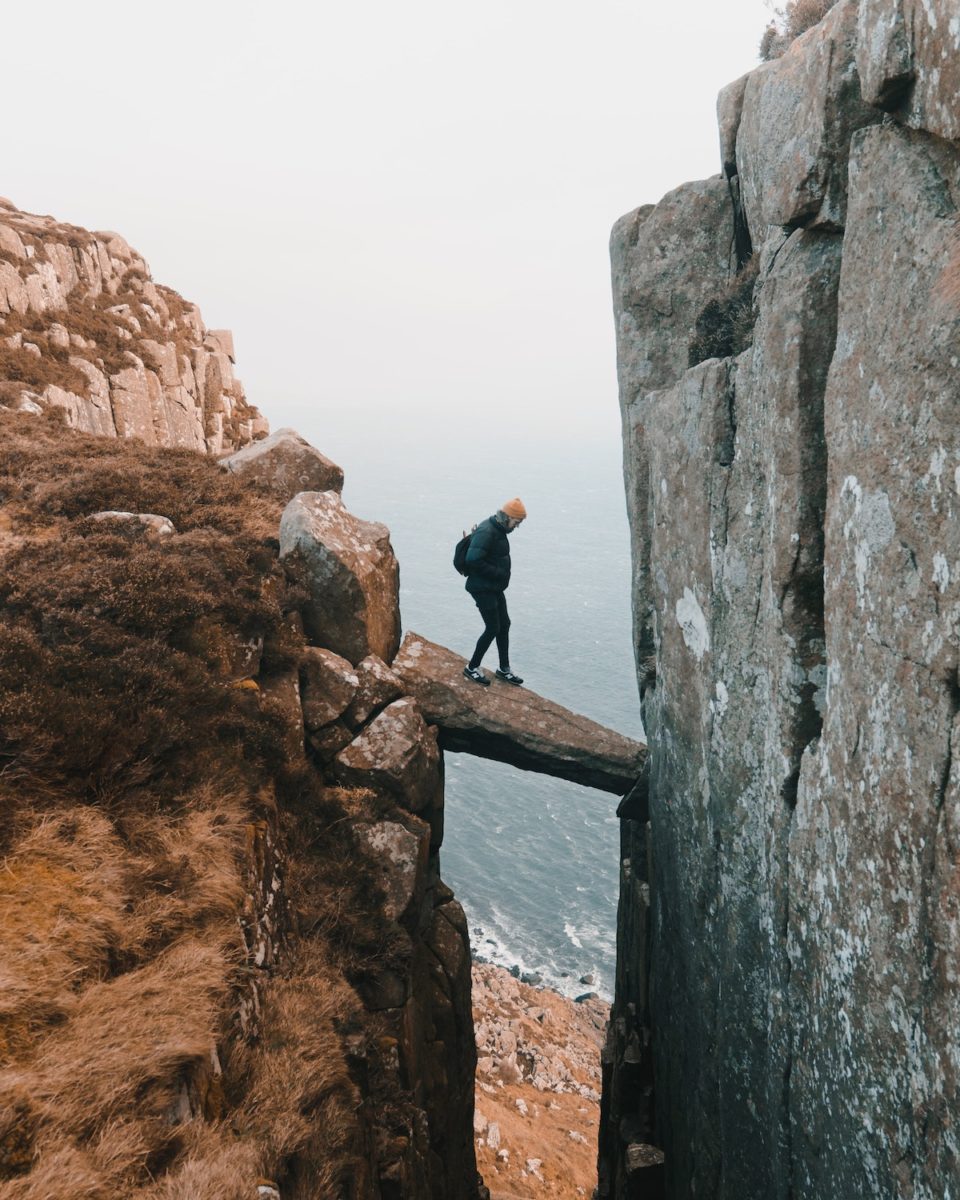 Hiking in Northern Ireland's Ballycastle—not for the faint of heart. Photo by Michael Shannon.

The arresting Causeway Coastal Route snakes around captivating landscapes that will have you thinking you are visiting a mythical place. And in some ways, you are—much of  Game of Throne was filmed in Northern Ireland at sites such as Cushendun Caves, A.K.A. the “shadow baby scene” or the tree-lined road of the Dark Hedges.

Start in Belfast to visit a castle with a view, Carrickfergus Castle. Before you head up the coastline, grab a pint and maybe catch a music session at Kelly’s Cellar.

How to spend a long weekend in Belfast, Northern Ireland→

Along the coast, wander around  Glenarm Castle and its garden—it’s one of the oldest in Ireland. Book a stay at  Salthouse Hotel, a luxury eco four-star hotel in Ballycastle with an amazing bar and restaurant, spa, and golf course. This hotel is a great base for a trip to the mythical geological wonder of The Giant’s Causeway and its 40,000 perfectly formed rocks.

And for those who love whiskey, this trip would not be complete without a tour of the Old Bushmills Distillery to learn about the ins and outs of Irish Whiskey. 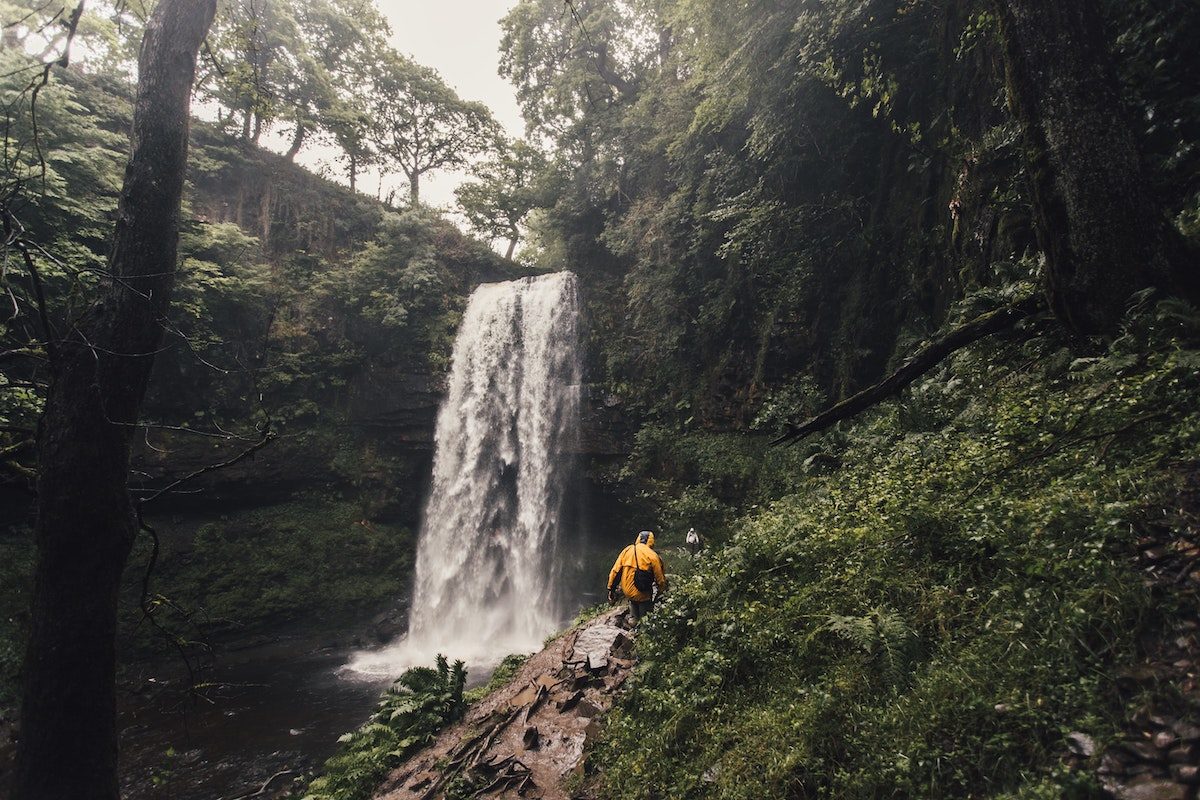 The Cambrian Way navigates the rocky spine of Wales. It’s a 185 miles  route that will take you through national parks, historic towns, and the green countryside coast to coast. Start out in Cardiff and then hit the road to Brecon Beacons National Park for a day for exploring nature.

Don’t miss out on visiting the only hand-crafted crystal glassmaker in Wales, Welsh Royal Crystal, in Rhayader where you can take a workshop and pick up a few gifts. Afterwards, head to lakes of Elan Valley to stretch your legs around these alluring reservoirs either by foot or bike. Stopover in the beautiful Conwy Valley to visit Gwydir Castle, a grand Tudor courtyard mansion that was the ancestral home of the influential Wynn family. You can also sleep in the castle if you dare, as it’s rumored to be inhabited with ghosts.