Every traveler has a bucket list city (or 50). But sometimes, the threat of disappointment can be enough to keep us away. For writer and Here issue 10 contributor Porochista Khakpour, the promise of otherworldly Mexico City would need to be put to the test.

For years I thought there had to be a word for the love of a place you’ve never been to or a person you’ve never met. Something that’s not quite lust or longing; closer to obsession, but more muted. For me it was always about setting, whether time or place. The 1930s. The early ’60s. Before I went there: Prague. Hong Kong, a place I still haven’t been to. But more than anything else, it was always Mexico City, and I knew I was not alone.

I had always felt that it was a place where women artists thrived solo: Frida Kahlo, Leonora Carrington, and Remedios Varo all had men in their lives but their time in Mexico City seemed to be all about them. There was something a bit gritty mixed with the surreal in the photos I’d seen and the accounts I’d read—a place where women could really flourish and be the wild, weird, wonderful beings they are.

To me, Mexico City—or D.F., for Distrito Federal—bordered on the hyper-real: intense, material, wild, almost neon in its aura. My obsession started when several people I knew from the New York art world seemed to be defecting there blindly. It felt like for many it was not a stretch to be so in love with a city they did not know—even its concept seemed like it could be reality enough.

To me, Mexico City bordered on the hyper-real: intense, material, wild, almost neon in its aura.

But concept can only sustain you for so long. And the worry, always, when meeting someone or someplace you’ve mounted on a pedestal is that it doesn’t hold up. I felt certain that, upon my arrival to Mexico City, the idol I’d built inside my head was bound to topple.

I booked my trip, that fear of disappointment only heightening when I learned that I would be there for the rainy season. I headed there during the second week of August anyway.

Upon leaving the Aeropuerto Internacional Benito Juárez, my vision seemed to come alive but even more vividly. Mexico City, here I was, so suddenly. Here was the palette of candy-colored adobe homes lit luminously against a brooding silver sky (part smog, part monsoon rains and the intense overcast of the afternoons). Everything was a spectral matte, a little bit sullied, chipped, smudged in its beauty.

Here were the crowded streets I had been warned of, pink-and-white cabs against bicyclists and motorcyclists, and arbitrarily crossing jaywalkers, fruit vendors and street performers, and skinny unleashed dogs winding through traffic and pedestrians, scouting trash cans. Mexico City was musical, narrative, delicious, an activation of all my senses. I was immediately in love—and it was more than just a confirmation of what I knew I’d fall for; it was a love that was a yearning, a desire to be a part of it. A desire that already bemoaned a good-bye I knew would come way too soon.

My vision seemed to come alive but even more vividly.

It didn’t matter what I did: Everything delivered. I devoted my first day to the business of art, starting with Chapultepec Park, which houses some of the most popular museums. I went hoping to find some Carrington and Varo but instead got lost in the last week of the Francis Alÿs exhibit at the stunning Tamayo, which is now one of my favorite modern art collections. Next up: traveling half an hour south to Coyoacán, to the house where Frida Kahlo was born and raised, and where she died, La Casa Azul. 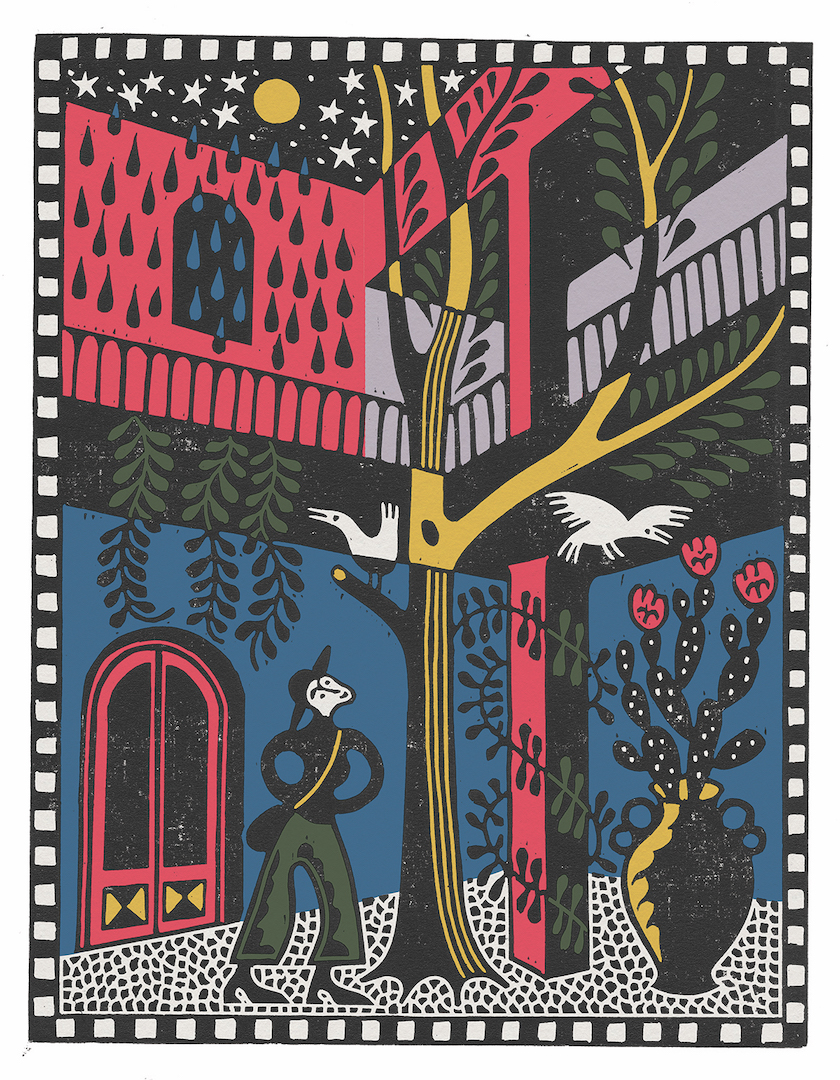 "One just had to accept that the weather was going to be a presence and it would not be forgotten."

Snaking through the house, which is more a time capsule of her life than a museum, I saw paintings as well as artifacts: her doodles (the name Diego featured prominently), and a case full of butterflies her ex-lover Noguchi gave her, mounted above her bed. Afterward, I wandered around the cacti in her garden, marveling at the cobalt blue that coated the building and taking selfies—playing Frida as everyone seemed to be doing. This is exactly what I thought it would be, I kept thinking.

Do you make the realm of your dreams the residence of your reality?

It rained every day in Mexico City between four and seven in the evening. The sky would darken and sort of crumble into an ashy premature twilight. Harsh rumblings punctuated by ear-splitting bangs would pound through the city, followed by explosive downpour, the kind that renders umbrellas anemic in action and ludicrous in concept. This would last a couple hours at most, and then there’d be another round in the middle of the night or early hours of the morning. I’d be pulled out of deep sleep as if by supernatural forces, a few times totally disoriented by both the phenomenon and my new surroundings.

But what no one told me was that, unlike many American cities, this was a city whose cobblestoned streets wore rain incredibly well—not to mention the ample awnings and umbrellaed terraces, which made even something as mundane as summer rain a notable affair. One just had to accept that the weather was going to be a presence and it would not be forgotten. But what in the whole of Mexico City was subtle, mild, forgettable anyway?

It was a love that was a yearning, a desire to be a part of it.

I spent most of the trip alone, but one night I met up with my friend, the writer Francisco Goldman. The plan was drinks at a place called Covadonga and then his favorite tacos. (Everyone in Mexico City has their favorite tacos, and they are never the same ones.) I walked from Condesa to Roma Norte—which was bustling with cute groups of young people all dressed in hipster gear among boutiques and cafes and bars, which range from chic to edgy, arty to urban. (William Burroughs drunkenly shot his wife in Roma in 1951, during an ill-advised game of “William Tell.”)

Then I made my way up Durango to the Plaza Río de Janeiro, full of skaters, the smell of pot, hand-locked lovers, a few old people feeding pigeons, all around what Francisco had aptly described as a “hideously hilarious” statue of David in the center of the square. A gaggle of drunk teenage boys huddled together, howling along to Pixies hits as one of them played his guitar. To hear the Pixies, from teens, in Mexico City—if I wasn’t over 15 minutes late already for Francisco I would have stayed in that heaven until they disbanded.

“You really love it here, don’t you?” Francisco marveled as I breathlessly went over every detail of my stay.

The thought had occurred to me many times. And not too long after that trip, once talk of building a wall went on and on, I fantasized about relocating to the other side. But a part of me wondered: Do you make the realm of your dreams the residence of your reality?

What in the whole of Mexico City was subtle, mild, forgettable anyway?

One thing that Mexicans don’t make a big deal of in D.F. is the altitude. I had lived in Santa Fe for several years and the city was full of altitude warnings, oxygen bars, everyone telling you that you’ll be ill for days, that one drink would equal three on sea level. To give you an idea, Santa Fe sits at 7,199 feet, while Mexico City tops that by another few hundred. In other words, hangovers are not the prettiest, and a night at Covadonga with Francisco, which ended well into the morning hours, tacos long forgotten, left me paying for it the next day—my last. It took a substantial amount of street tacos al pastor (with shawarma spit-grilled meat) followed by an ice cream cone in Parque España to repair my grim state.

What enchants me most about Mexico City is that I know it has many more things to show me, many lessons to teach me during my next visits—and I know there will be many.

A version of this story appeared in Here Magazine issue 10.