Booking It to Prague: A Literary Guide to the Retro-Dystopian Capital

As the creator of Subway Book Review (@subwaybookreview on Instagram), Uli Beutter Cohen (@theubc) discovers people and places through books. Her literary guide to Prague allows you to do the same.

Prague has been on my list of places to see for a very long time. Known to be a muse to writers like Kafka and Kundera, and named the “City of Literature” by UNESCO, the stakes were high as I went to explore the contemporary scene. To see the Prague I had dreamt about, I had to get off the beaten path and away from the tourist-flooded streets. The metro, which is worth a visit for its architectural stations alone, was the perfect spot for conversations with locals like Jack, a young book publisher, who put things into perspective.

Not long ago, Prague was a communist city in a communist country, though “today, it’s more progressive,” says Jack. Still, “in terms of employment, politics, and literature, life is still quite male-dominated. That’s why one of the things I focus on is publishing female writers, like Petra Hůlová.”

When I asked Jack to meet me for coffee at Café NONA with a few of his favorite reads, he did not disappoint.

“I actually published a book called Three Plastic Rooms and designed the cover,” Jack said.  “In the story, an aging prostitute describes her life, her work, and the materialistic world she lives in. It’s very matter of fact, with a lot of dark humor. The author writes in a way that is meant to make me feel uncomfortable as a man, which I think is great. Other Czech authors I recommend are Daniela Hodrová who wrote Prag, I See a City… and Irena Dousková author of B. Proudew.”

Start your day in Old Town, which is a must-see and also pretty crowded. Go early to see the Old Town Square and all its attractions. The nearby Klementinum is a much raved-about Baroque library, but the lines are long and the access is restricted. Instead, go to the Municipal Library of Prague and stick your head into a book sculpture by Slovak artist Matej Kren.

David Černý is a famous and rebellious Czech sculptor whose public work can be seen all around Prague. I highly recommend going on a self-guided David Černý tour—you can find them all on Google. Hanging Man portrays a small Sigmund Freud hanging by one hand off a roof. The Head of Franz Kafka is in front of a shopping center and a nod to Kafka’s Metamorphosis. 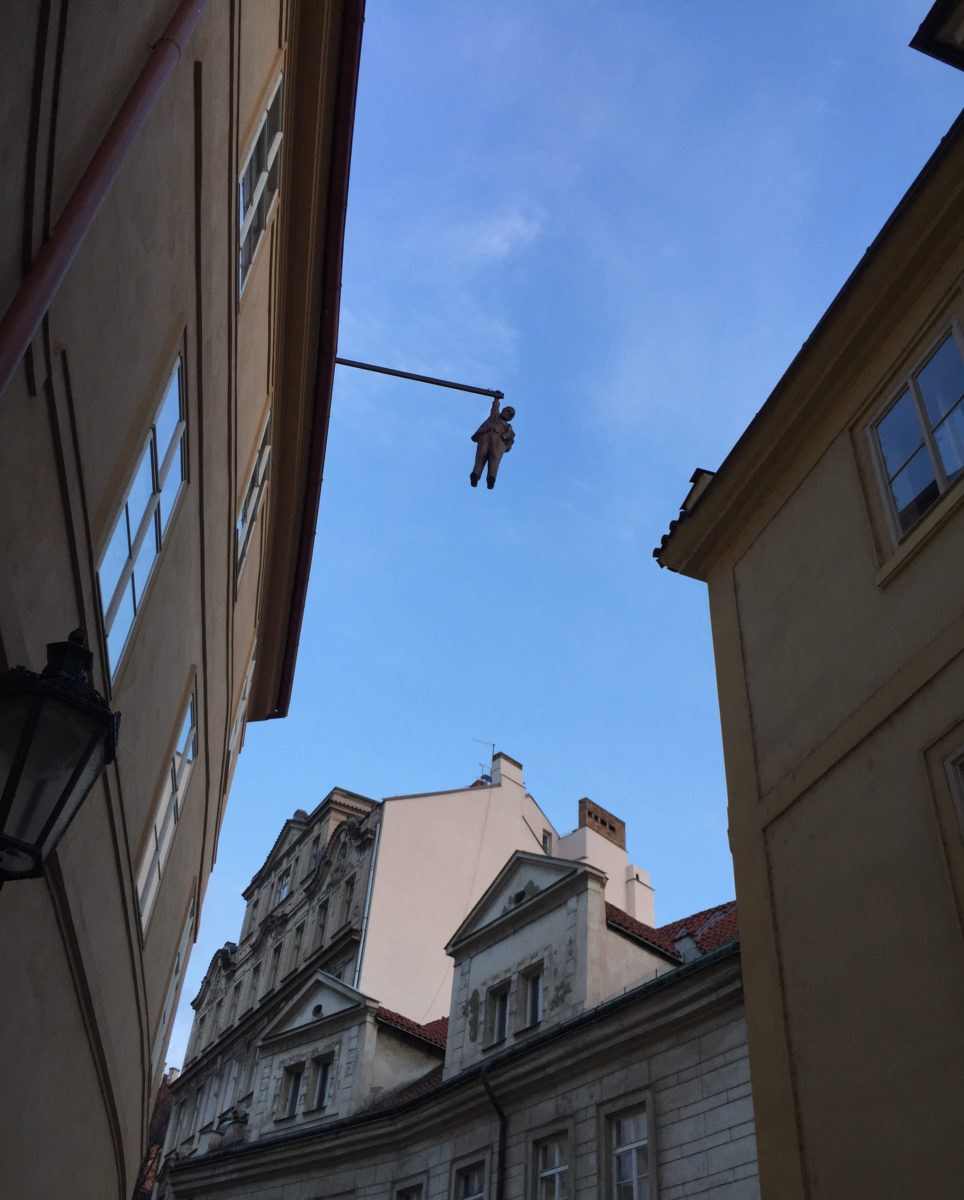 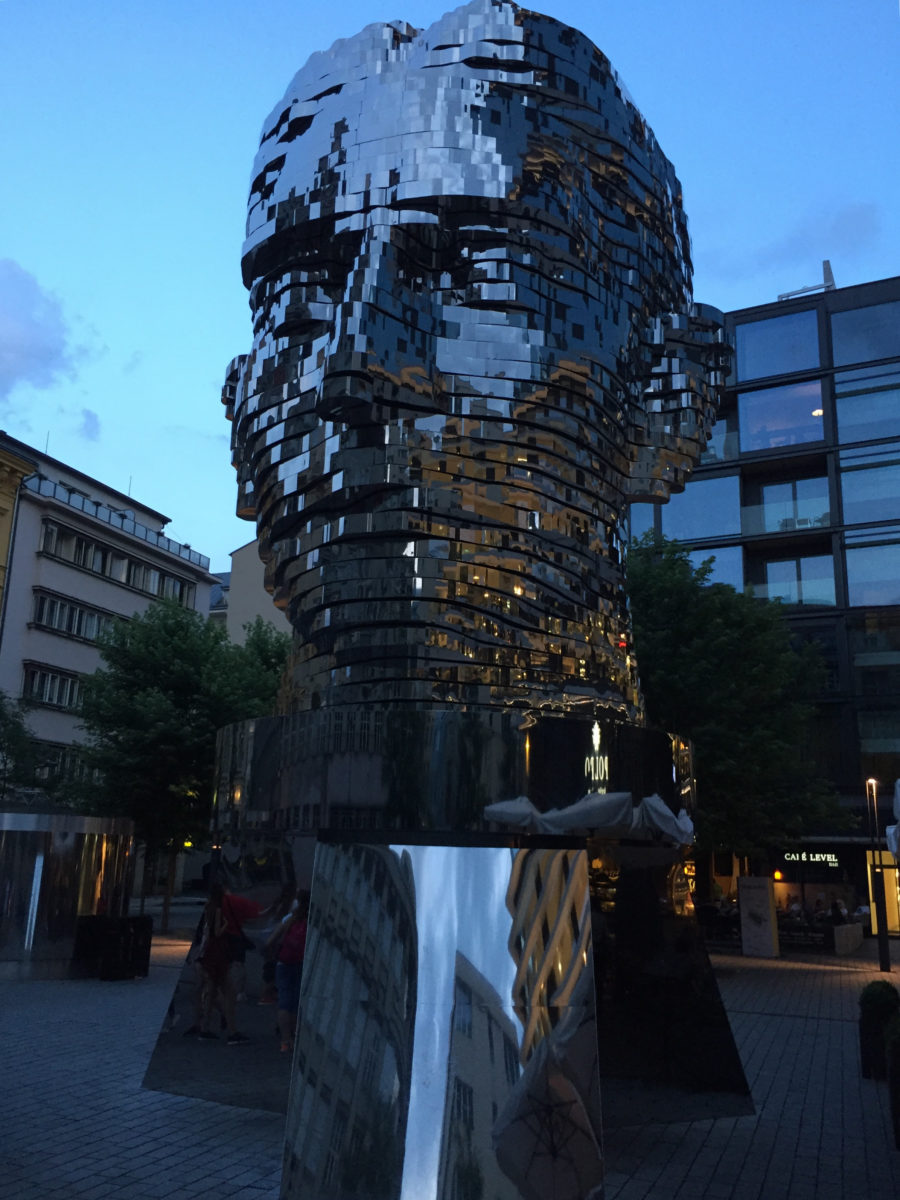 The Metronome is a fully functioning, larger-than-life musical sculpture perched above the city and the Vltava River. It took the place of a gigantic monument to Stalin following an equally gigantic demolition of said monument after the Velvet Revolution. The metronome is a symbol of Czechia’s past and the beginning of a new era, with time being the glue that holds both together, forever.

The DOX is a center for contemporary exhibits with a café, a bookshop—and a blimp, where literary readings are held. The blimp gave me the biggest vertigo of my life but the DOX is well-worth the trip outside city limits. You have to eat at Bistro Milada on your way back. It’s in a residential area and serves phenomenal neo-Czech food that you’ll long remember. The menu was super creative and somehow not pretentious, even though a beet root sauce, duck breast, and shaved truffles were involved. Easily the best food I had in Prague, and a great value for the quality of the local, seasonal ingredients. 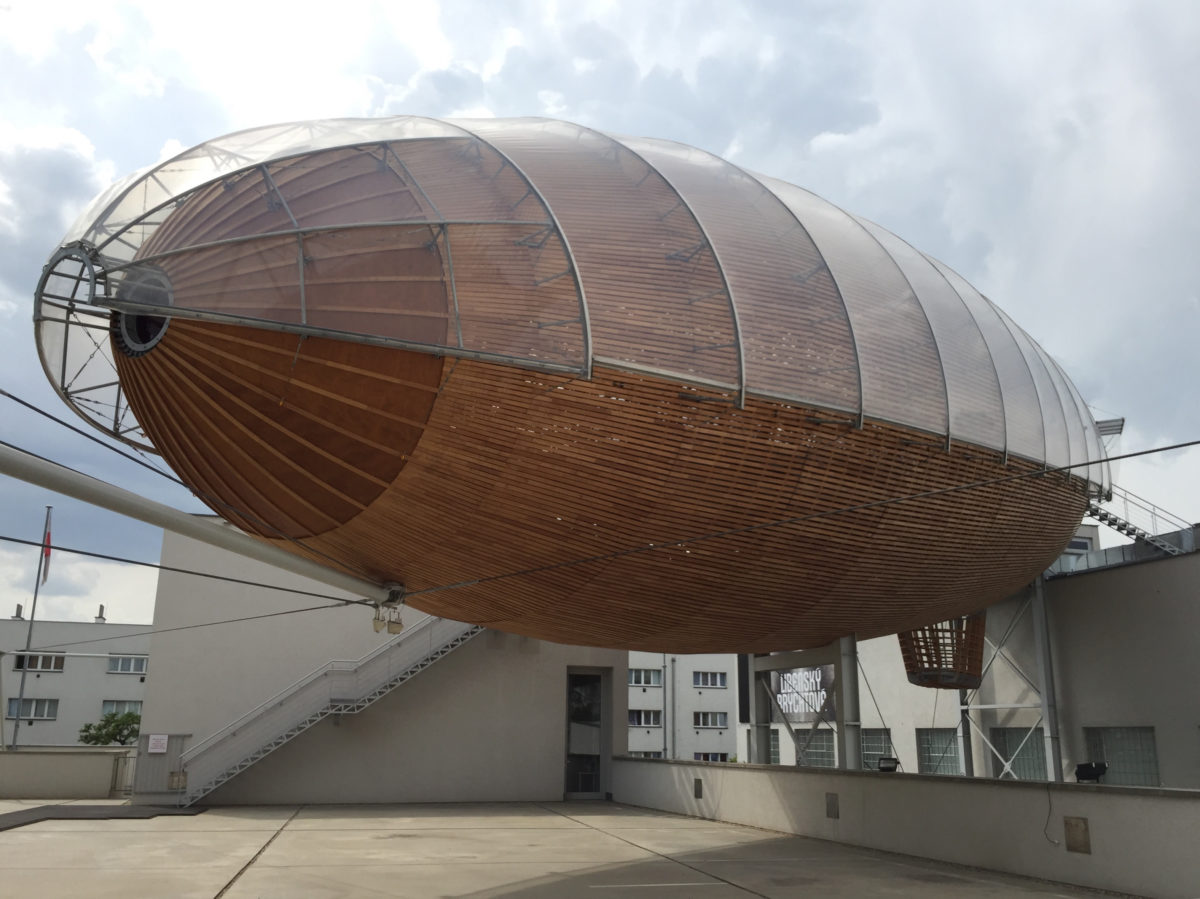 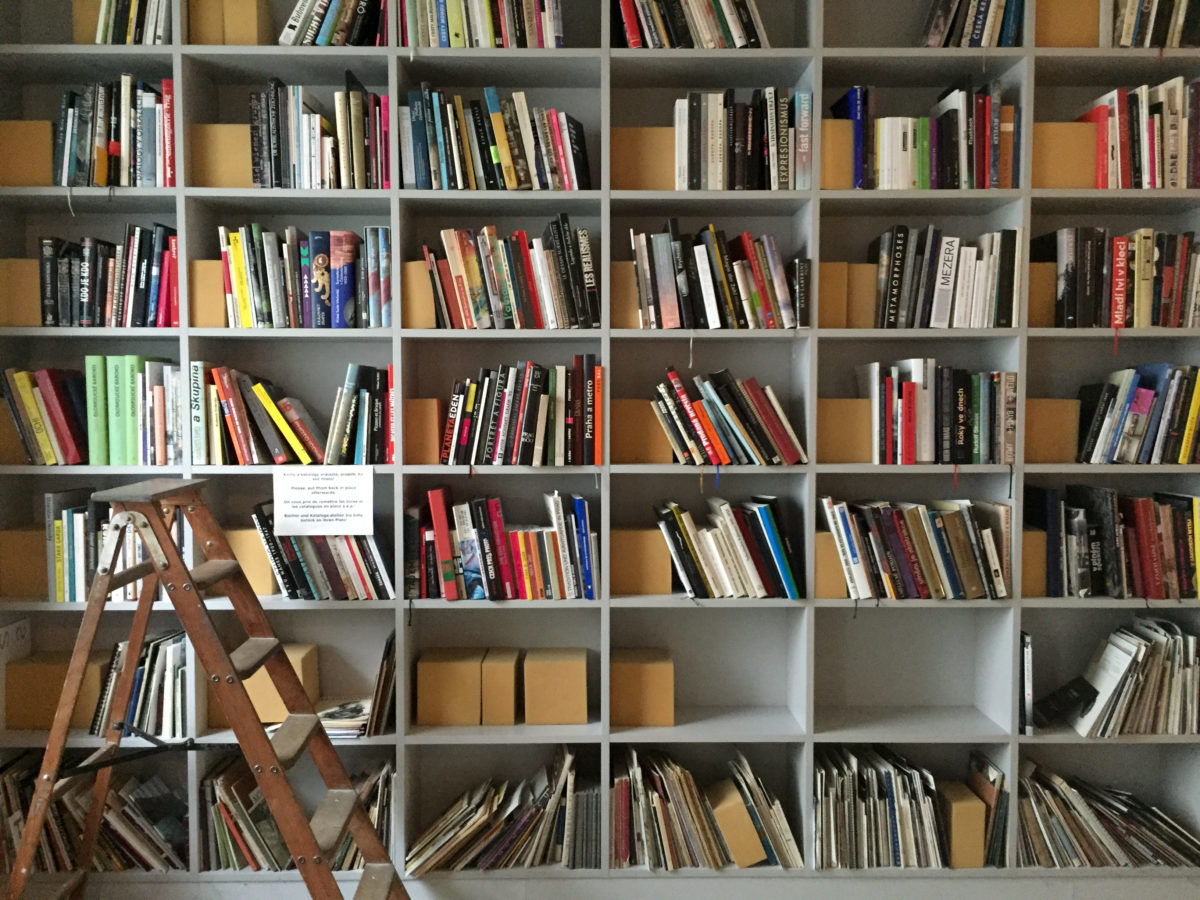 I’ve never seen a cuter or shorter street as packed with cafés for the literary-minded as Řetězová Street. It’s tucked away in the middle of Old Town and totally off the radar. You’ll have a hard time picking between Cafe Ebel, Café Montmartre, and my personal favorite, the iconic literary haunt Literární Kavárna Řetězová, where novels are written, discussed, and reinvented. 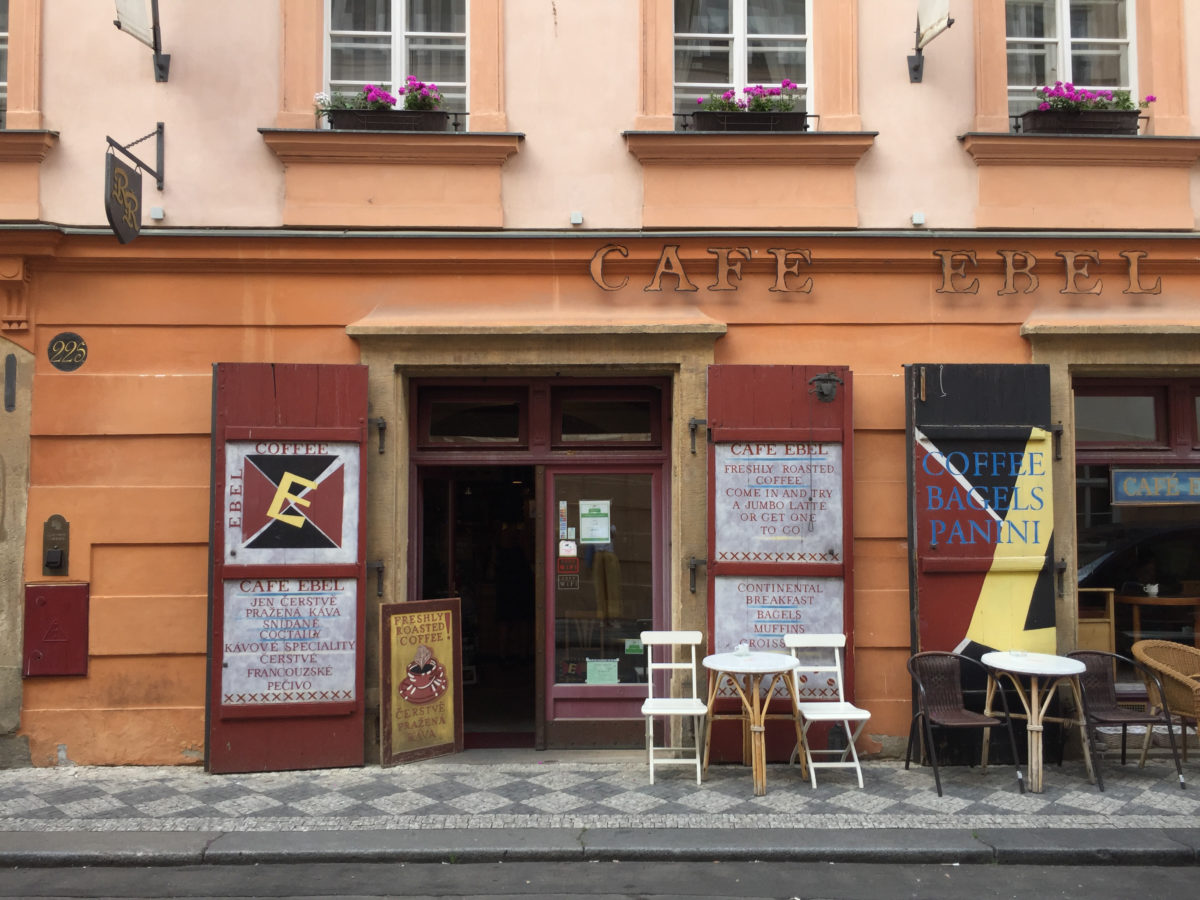 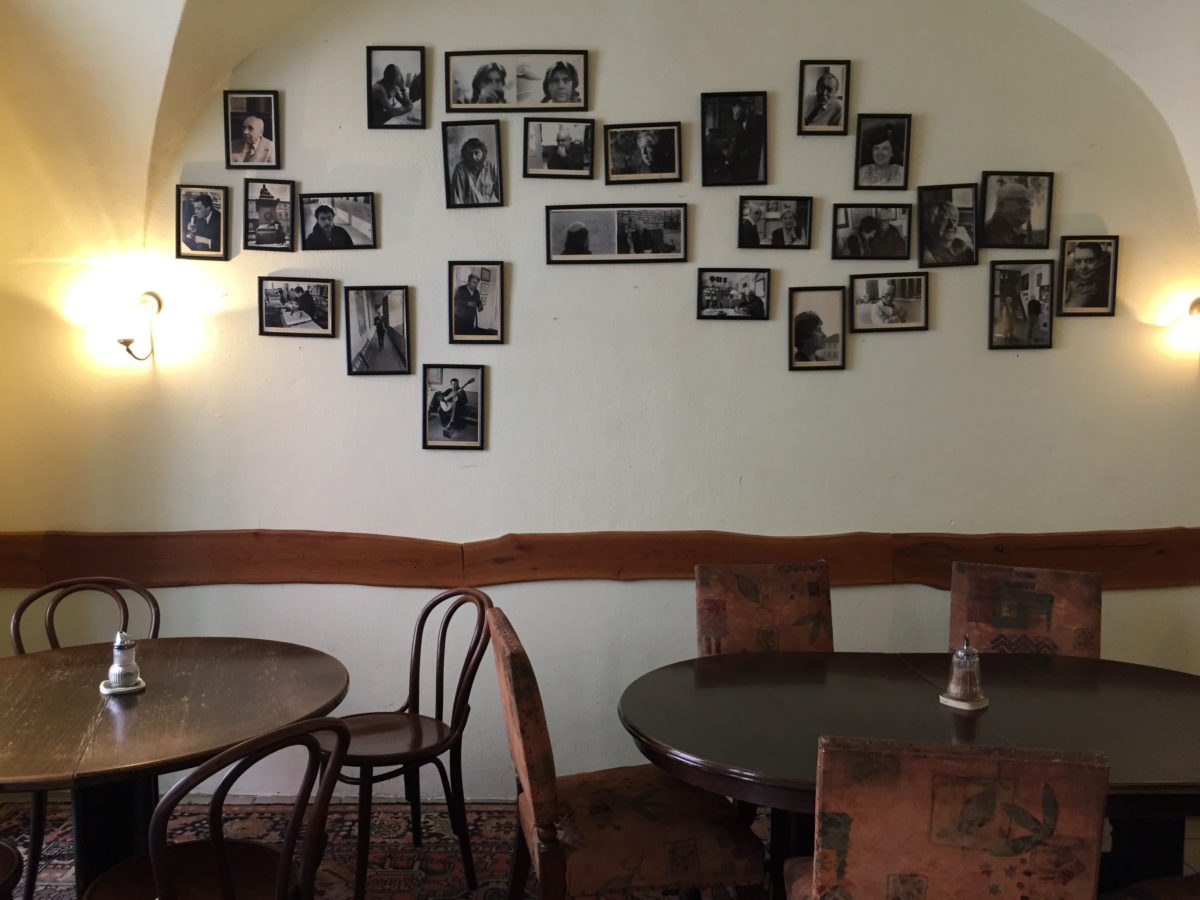 You should absolutely visit the Franz Kafka Museum, but the surrounding pink buildings and the proximity to the Vltava River with views of the Charles Bridge also make this an excellent place to take a break with a book. Bonus points for spotting David Černý’s sculpture Piss of two men peeing into the shape of the Czech Republic.

Now that you have walked in Franz Kafka’s footsteps, drank coffee (beer) where Bohumil Hrabal used to write, and met Petra Hůlová on the metro, you are ready to fill your suitcase with the books of local authors at another renegade Czech institution: Shakespeare & Sons, which is not to be mistaken for the famed Shakespeare and Company, and quite proud of its independence. Shakespeare & Sons is relatively small with 20,000 new and used English books in stock, but the assortment is surprisingly well curated. An extra nice touch is that on any given day, they celebrate author’s birthdays, and, if you’re like me, knowing that Chinua Achebe, Margaret Atwood, and Dostoevsky are all Scorpios will totally make your day.