The Foodie’s Guide to Central London

The decorations at the Bloomsbury's Dalloway Terrace change with the seasons, promising visitors a new, exciting experience every few months.
IndexTiana Attride

A food-themed guide to central London, including the city’s Marylebone, Bloomsbury, and Kensington neighborhoods.

No matter what you love most about dining out—whether it’s a restaurant’s quality, ambiance, or simple Instagrammability—there are few better cities in the world to do so than in London. The UK hasn’t always been known for its food (beans on toast—the jury is still out!). But a recent wave of innovative, one-off restaurants—which join an array of well-maintained classics—has elevated the British capital’s gastronomic scene to international acclaim.

Beyond your classic fish and chips plate (which remains a must!), there’s a world of dishes to explore; in this city, which rivals even New York in terms of diversity, the opportunity to try both British and international food presents itself on every corner—and plenty of cuisines from all over the world make our “best of” list.

Between the sightseeing and pub crawls (on any good trip to London, there will be plenty of both), you’ll want to make sure to stay fueled up. Here, find a guide to central London for the food lovers among us—guaranteed to send you belly full and blissful on your way back home. 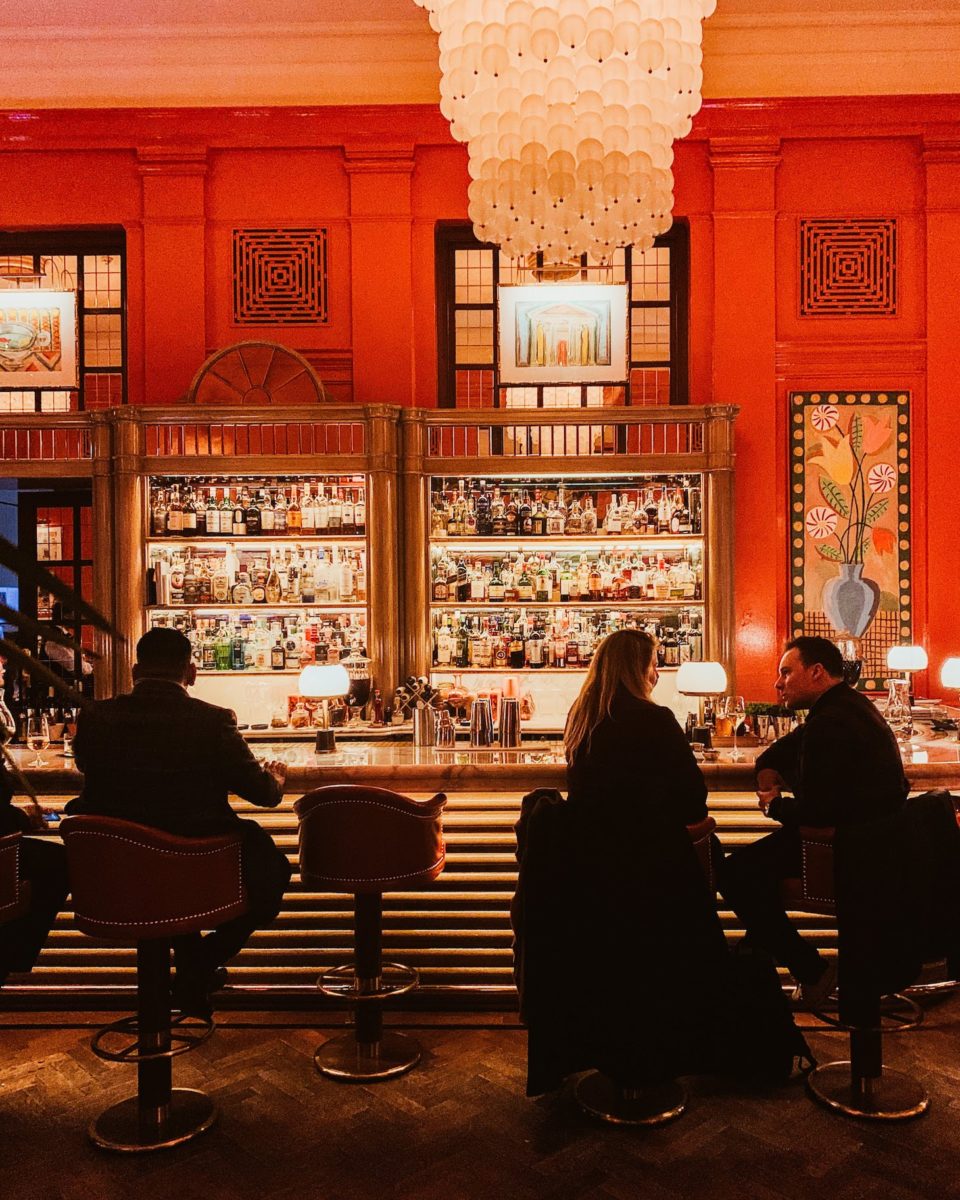 Inside the Coral Room at the Bloomsbury Hotel. 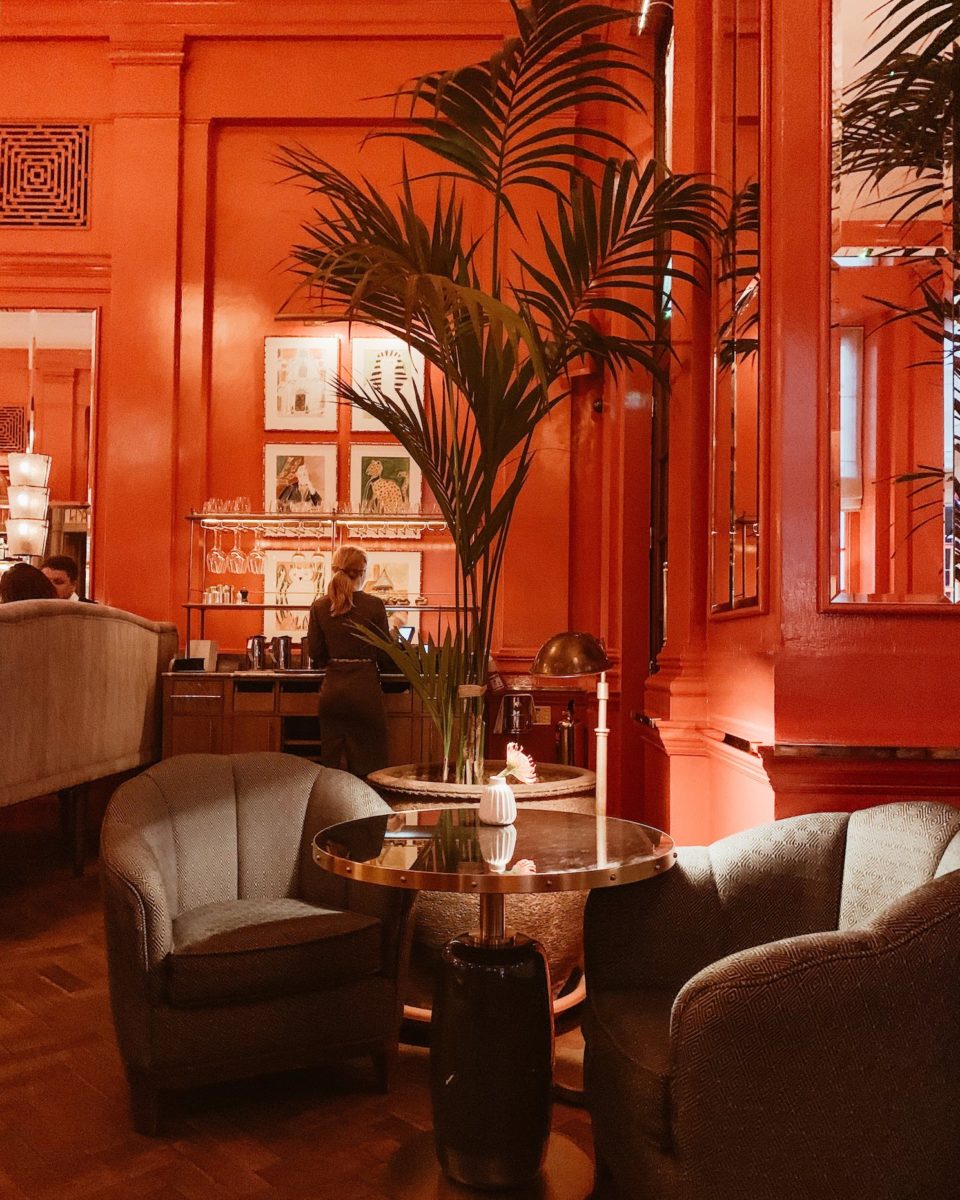 Obsessed doesn't even begin to describe my feelings. 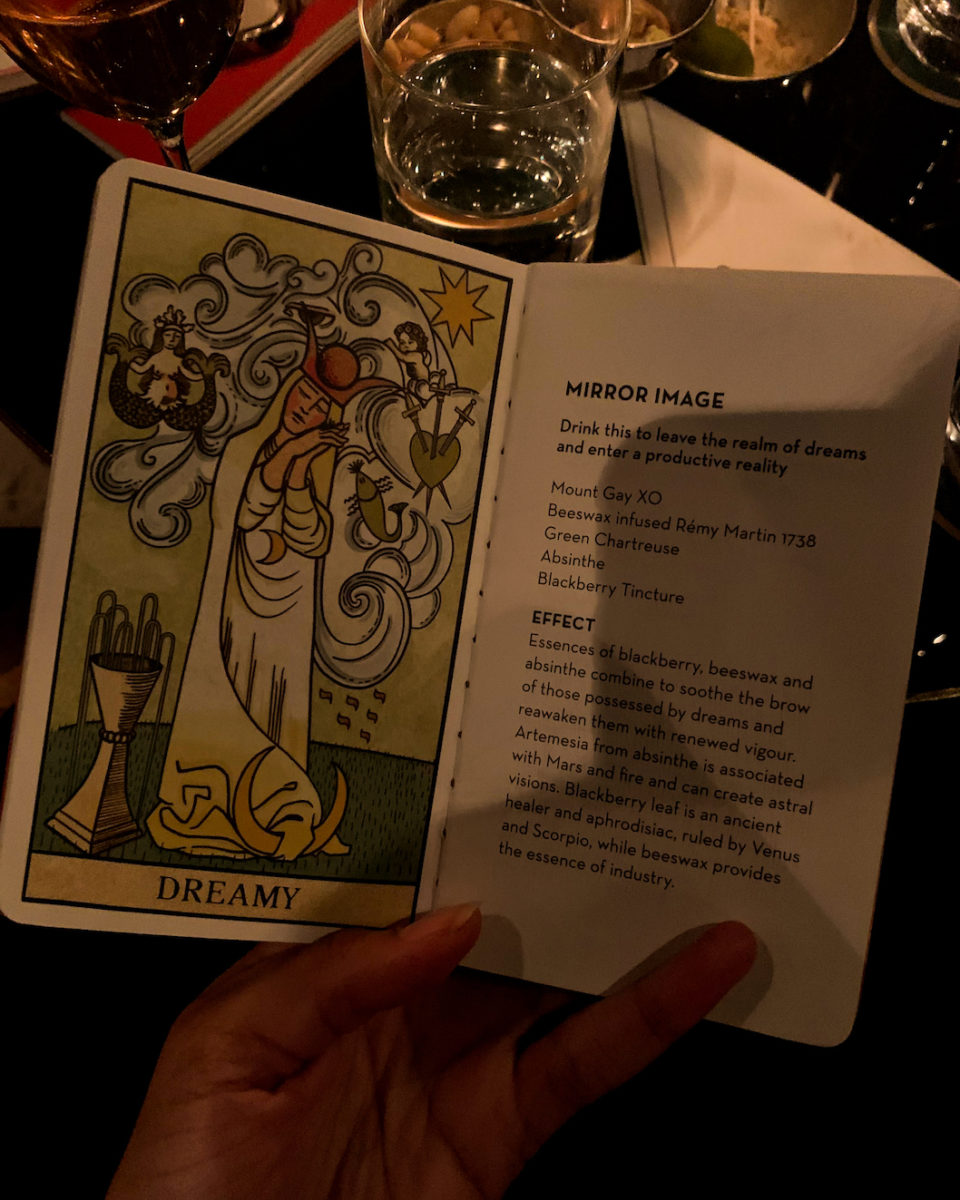 The drink menu at the Bloomsbury Club Bar gets the mystic theme across quickly.

The Bloomsbury is a triple threat for the food-savvy traveler: Start the night with dinner in the Dalloway Terrace, a glass-encased dining room whose decorations change with the seasons (when I visited, it was decorated like a winter wonderland, complete with pine garland and snow). Once you’re finished, head to art deco heaven at the Coral Room. Here, you’ll find a variety of English sparkling wines (a rising trend in England in recent years, with wineries popping up everywhere from Worcestershire to Cornwall) served in a coral pink, plant-filled bar whose design was borne of your wildest, Pinterest-perfect dreams. Finally, end your evening downstairs in the dimly-lit Bloomsbury Club Bar, where a Zoltar-like diviner will reveal your perfect drink based on your mood. (Personally, I see at least three rounds of drinks in your future.) 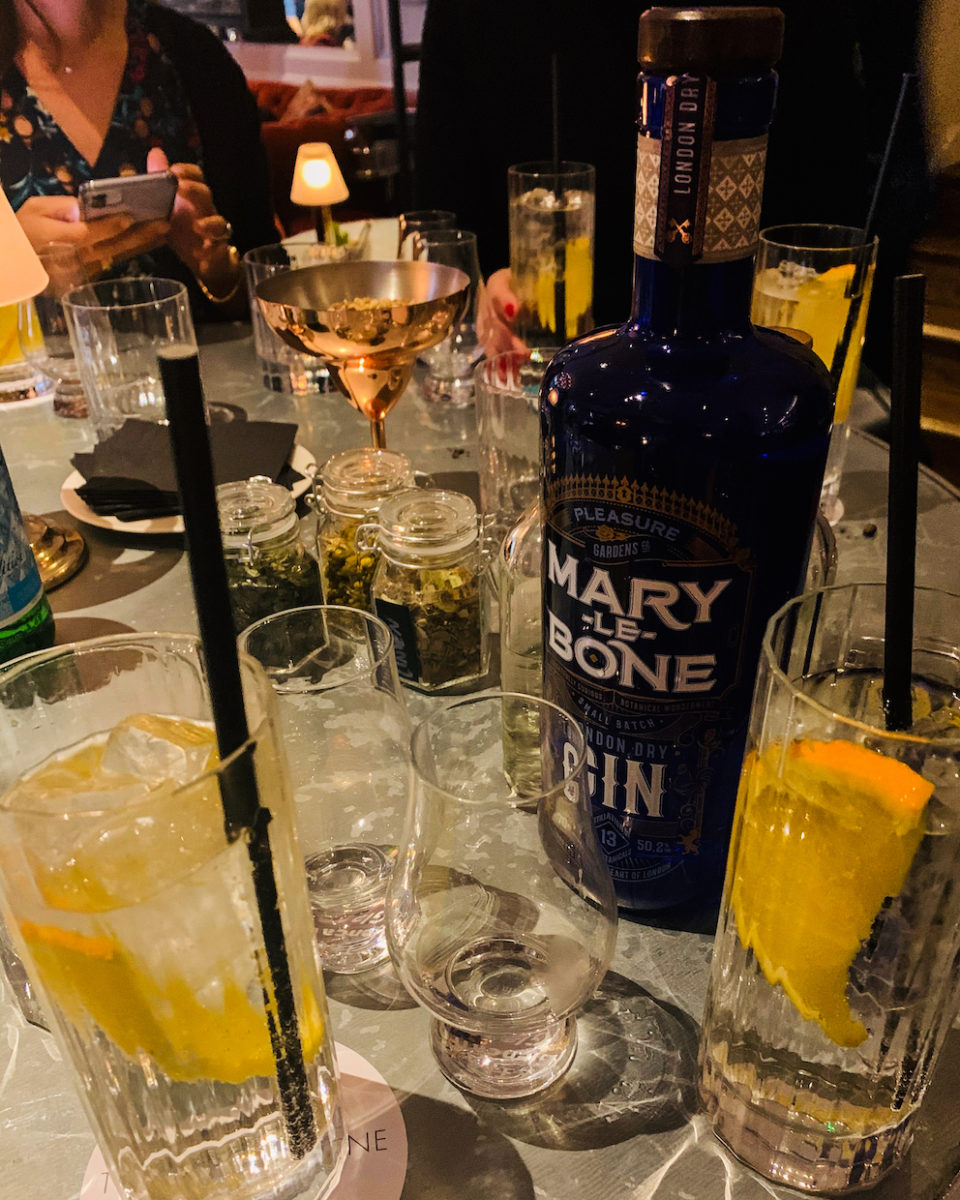 Gin is my personal favorite spirit—and the Marylebone's 108 Bar will make it yours, too.

I’ll admit it: I know very little about wine, and my craft beer knowledge consists primarily of things I’ve learned while working at Here Mag. But there is no spirit I love more than gin—and so imagine my delight upon discovering that the Marylebone has partnered with distiller Johnny Neill (8th generation member of the family behind Whitley Neill gin—my personal favorite!), to design the perfect gin bar. The result: Marylebone’s 108 Bar, featuring a wide variety of gins and gin-based cocktails, as well as an in-house copper pot still named Isabella, where visitors can see how 108 makes their own gin from scratch.

Also on site: the 108 Brasserie for globally-inspired dinners, and the Cocktail Bar for warm, cozy evenings in a jewel-toned bar lined with cushy velvet seating and tinged with gold accents. 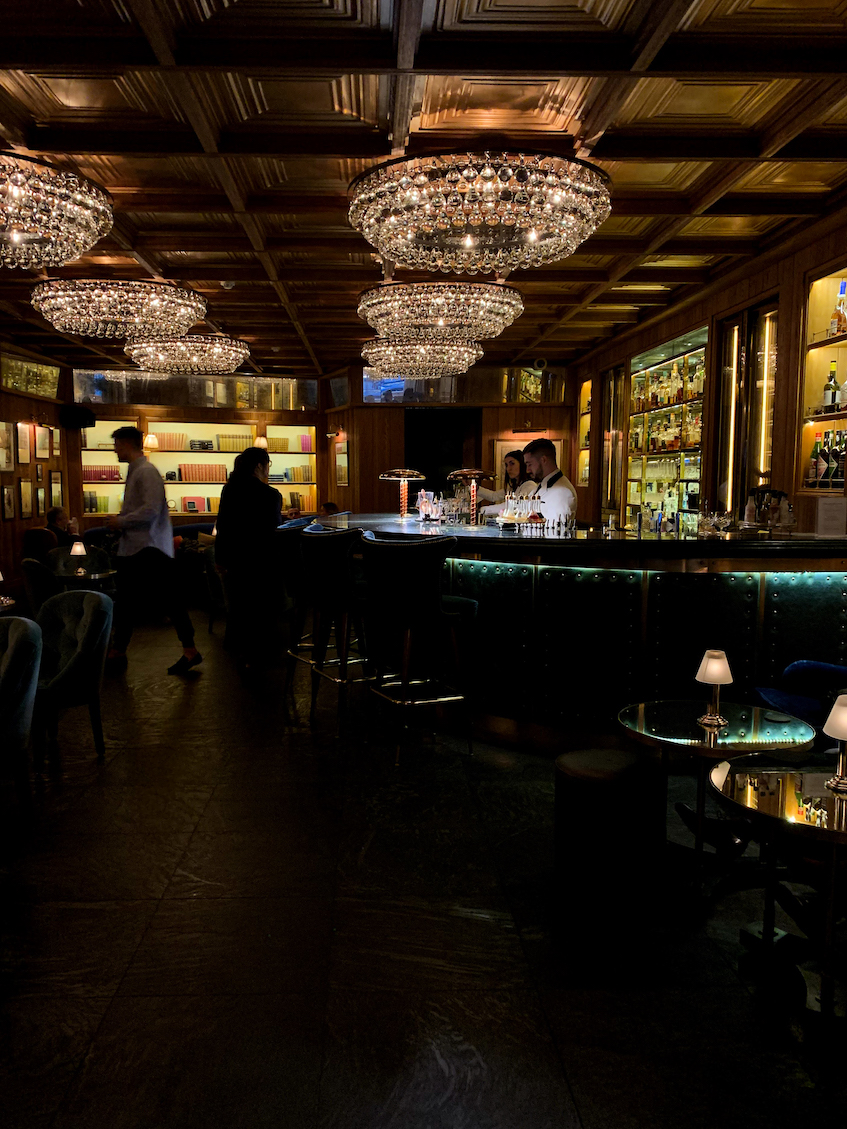 Inside the K Bar at The Kensington—a sleek and modern contrast to the neighborhood's posh vibes. 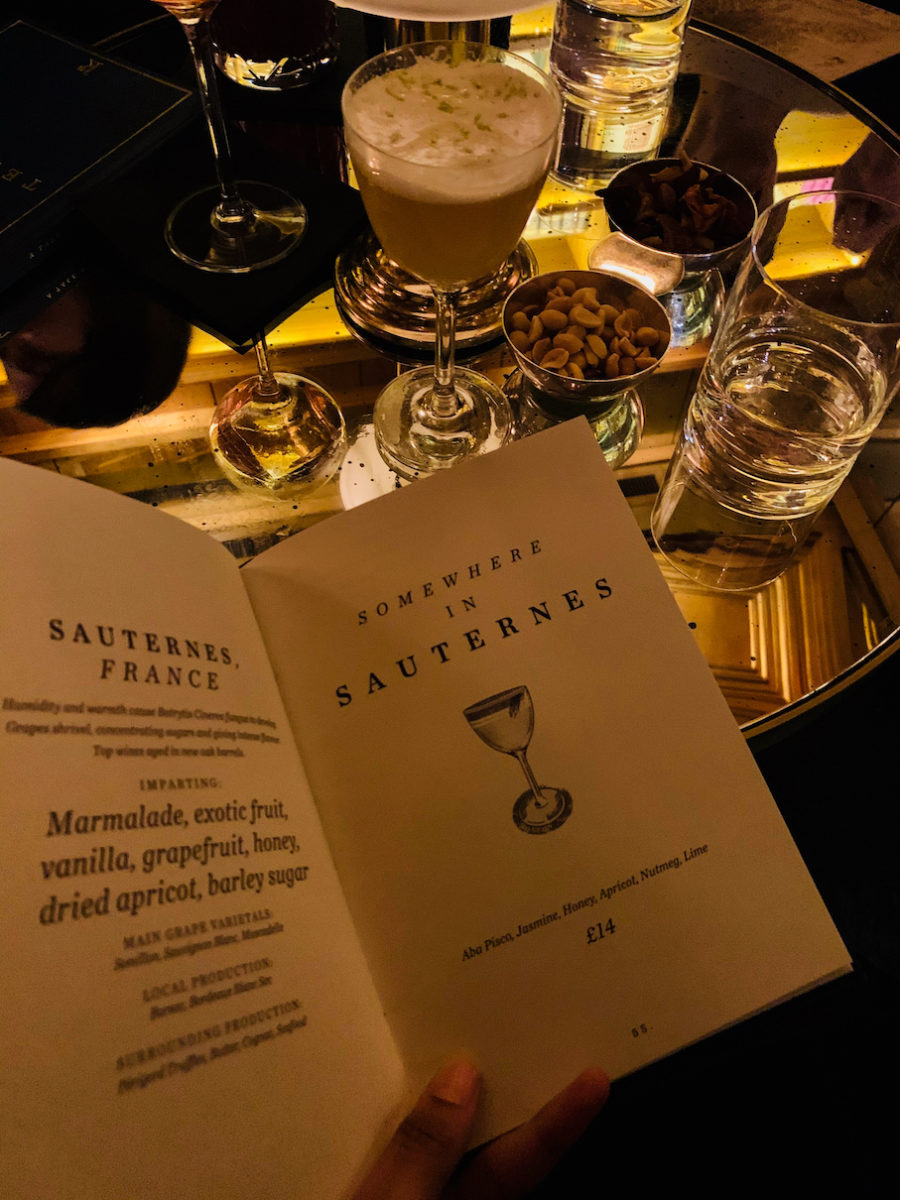 Much like the cocktails, the menus at the K Bar are a work of art.

I don’t care how “guidebook” it may be—I adore Kensington. In the area of London that makes me feel most like a quintessential Englishwoman (because even travel editors still get swept away in fantasy!), the Kensington Hotel wraps up everything I love about the neighborhood into one spot.

After an afternoon visit to the nearby Victoria and Albert Museum or Hyde Park, stop in for a London landmarks-themed high tea (complete with a miniature model London Eye that’s filled with pastries and sandwiches and actually spins). Then later, return for a visit to the K Bar—a sleek, Gatsby-esque enclave with a cocktail menu curated by Greek master mixologist Dominique Kokkala. (Seen above, the design of the menu is just as beautiful as the cocktails themselves.) 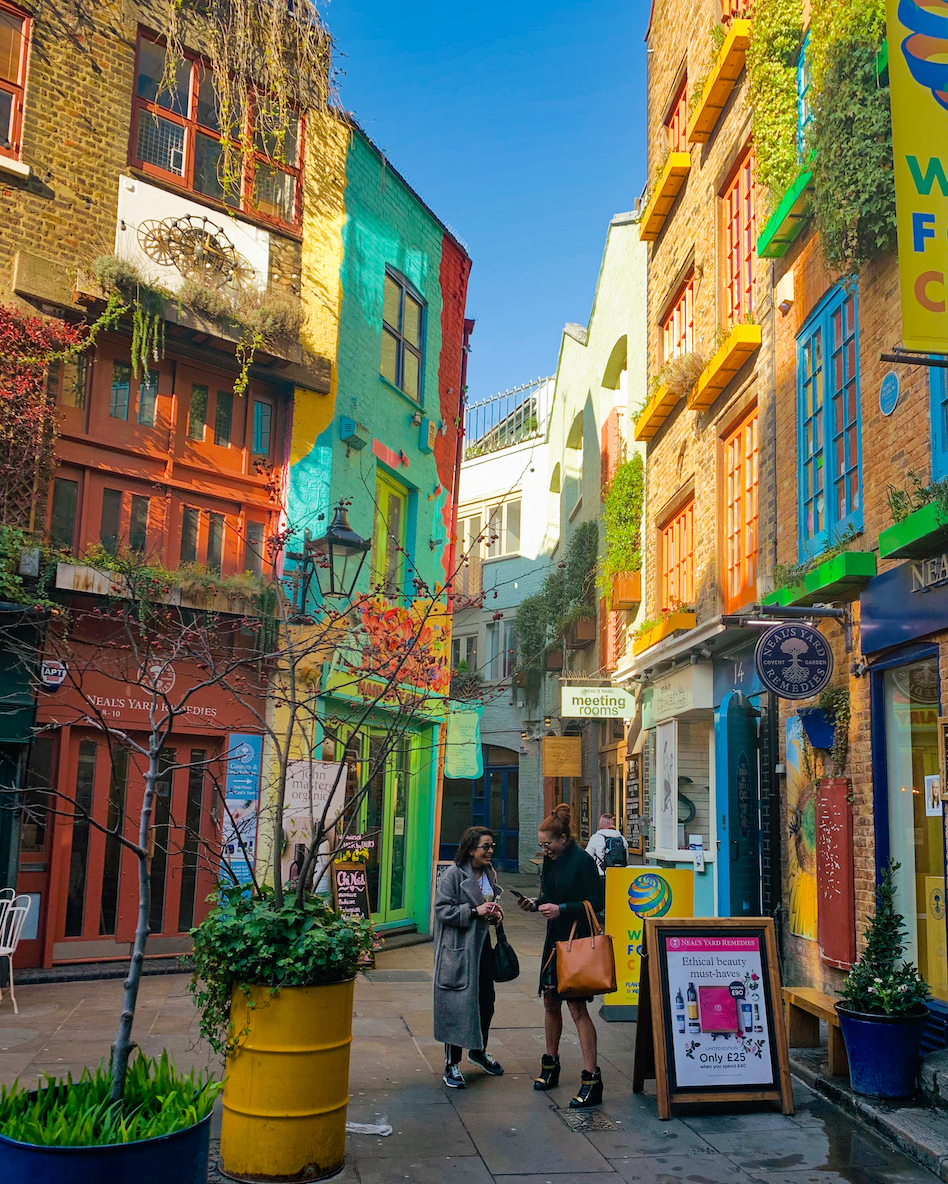 Neal's Yard is a technicolor heaven whether you get a lucky sunny day or typical London rain.

Where to Eat (and Drink)

To start off your morning, stop off for a coffee and fresh pastries at Jacob the Angel. You’ll find this coffee shop tucked into Neal’s Yard—an ultra-colorful cobblestone square in Seven Dials that’ll invigorate the senses and put you in a sunny mood, despite any potential London rain or fog. 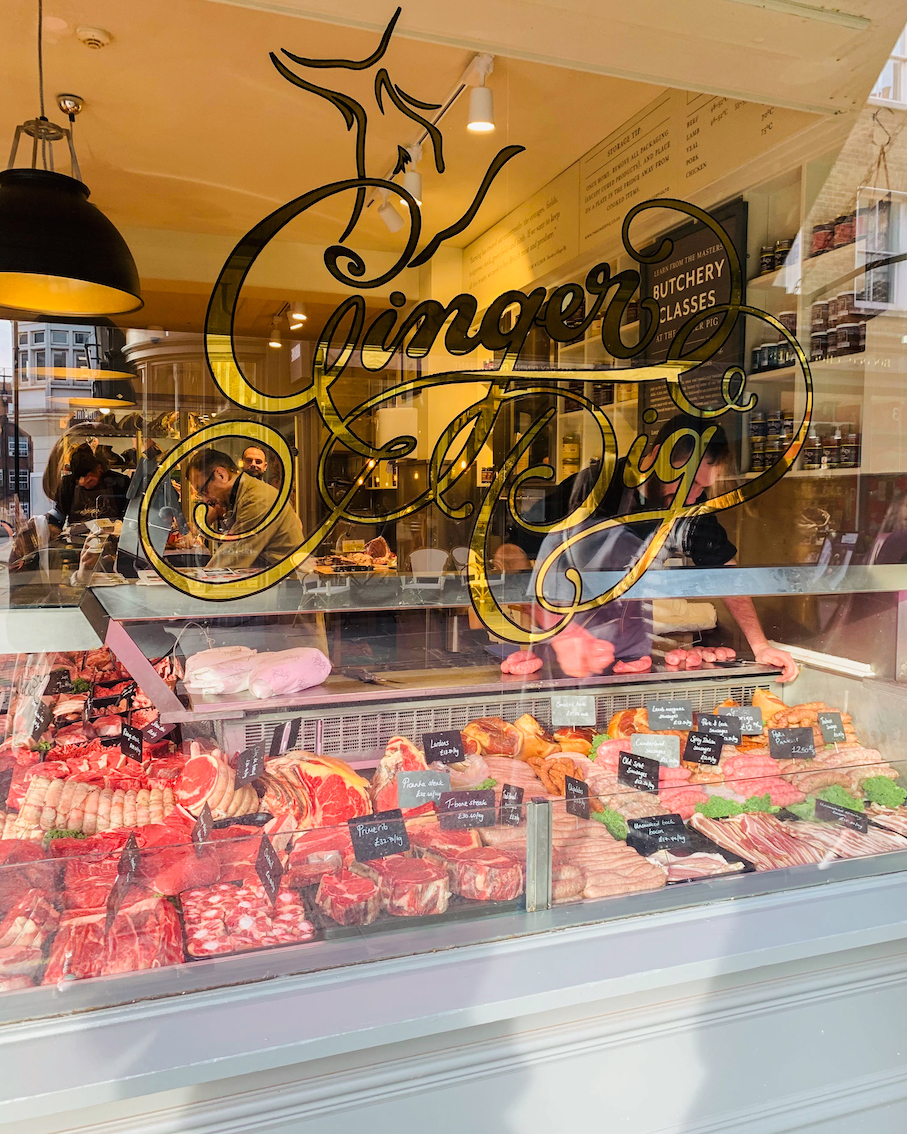 Don't miss out on the mac and cheese or sausage rolls at artisanal butcher shop the Ginger Pig. 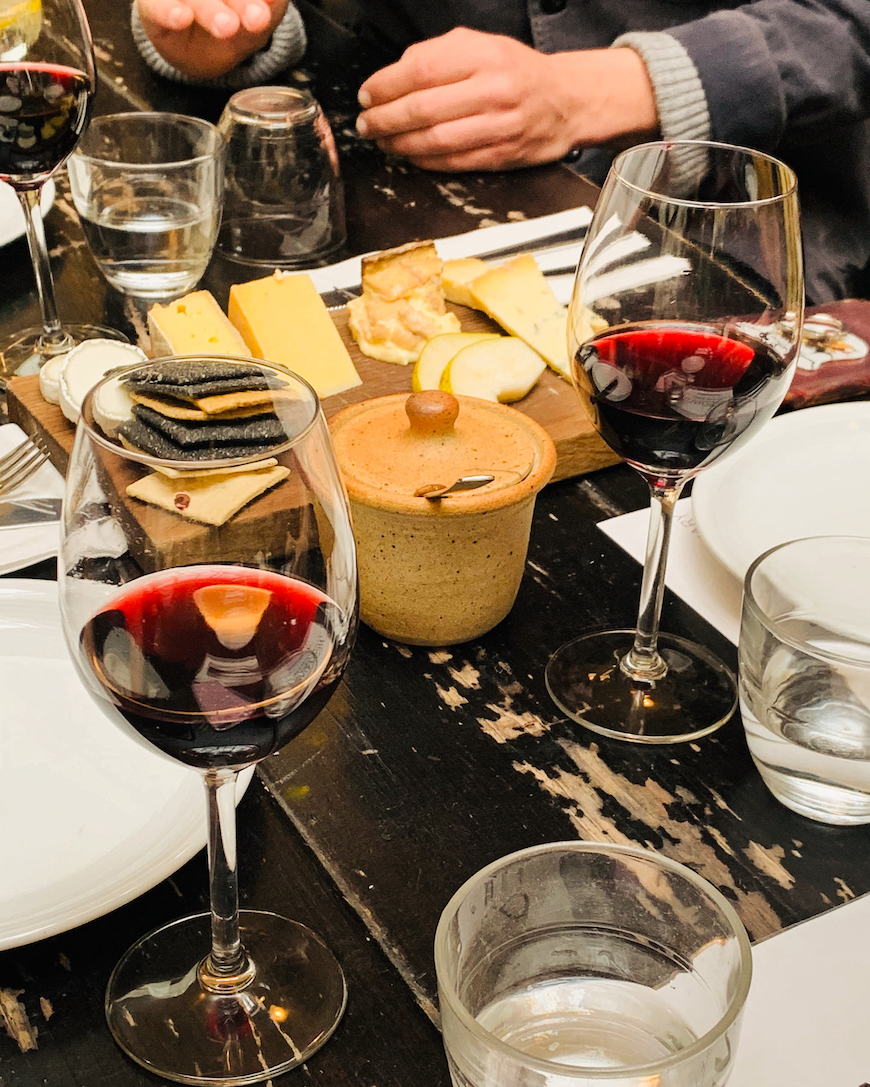 The perfect meal at La Fromagerie.

Famous in London for their sausage rolls, the Ginger Pig is one of the city’s top shops for farm-fresh, artisan meats. (If you’ve never seen a butcher expertly carve a piece of meat, the display here is pretty spectacular.)

Full disclosure: I’m a vegetarian. Even still, I found my home here; I have high standards for mac and cheese, and the Ginger Pig’s creamy, thick recipe took me straight to foodie heaven.

If we’re being honest with ourselves, there are few better meals than a glass of red wine, an international cheese board, and a slice of cake—and you can get all of these things served up at a long, sunny table at French farmhouse-chic La Fromagerie. And, if you realize you’ll need to buy a few treats for the road, lo and behold: they’re also a market selling the very same cheeses, cakes, and produce you just tried alongside charming, locally-made home goods. (Worth noting: La Fromagerie reignited my love of carrot cake and is almost guaranteed to do the same for you.) 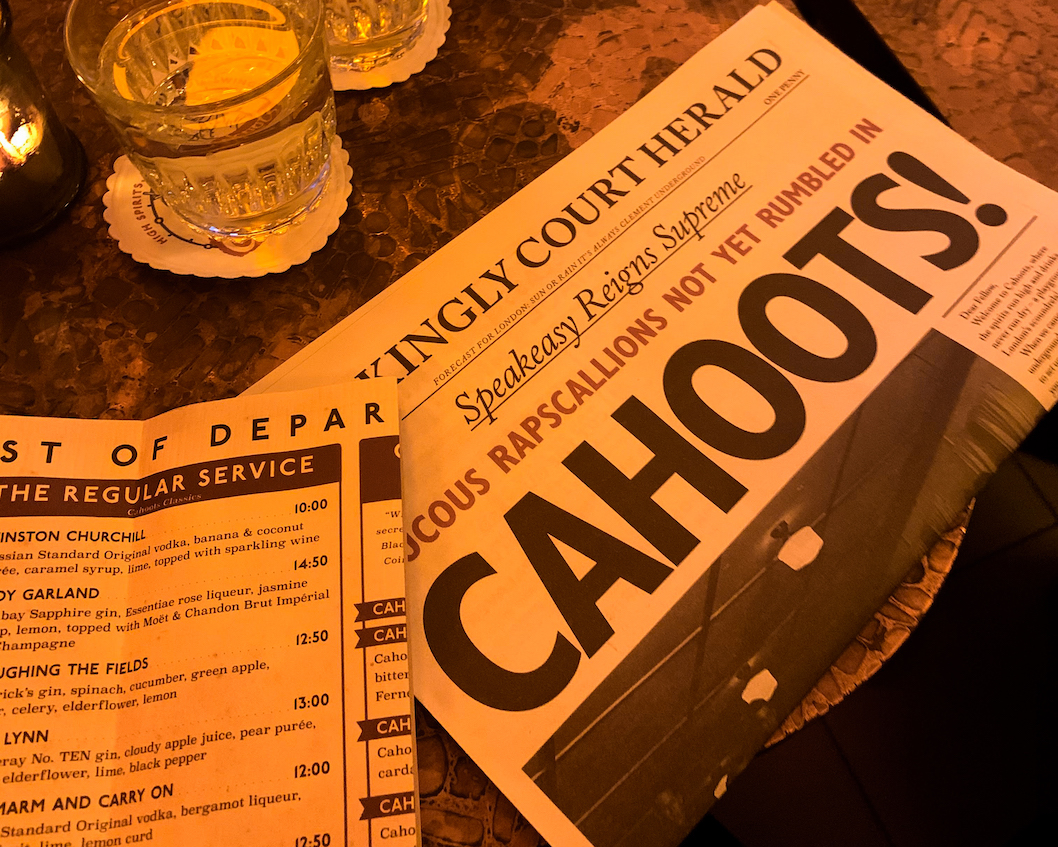 Built inside a refurbished tube station, Cahoots will take you back in time to early 20th century London. 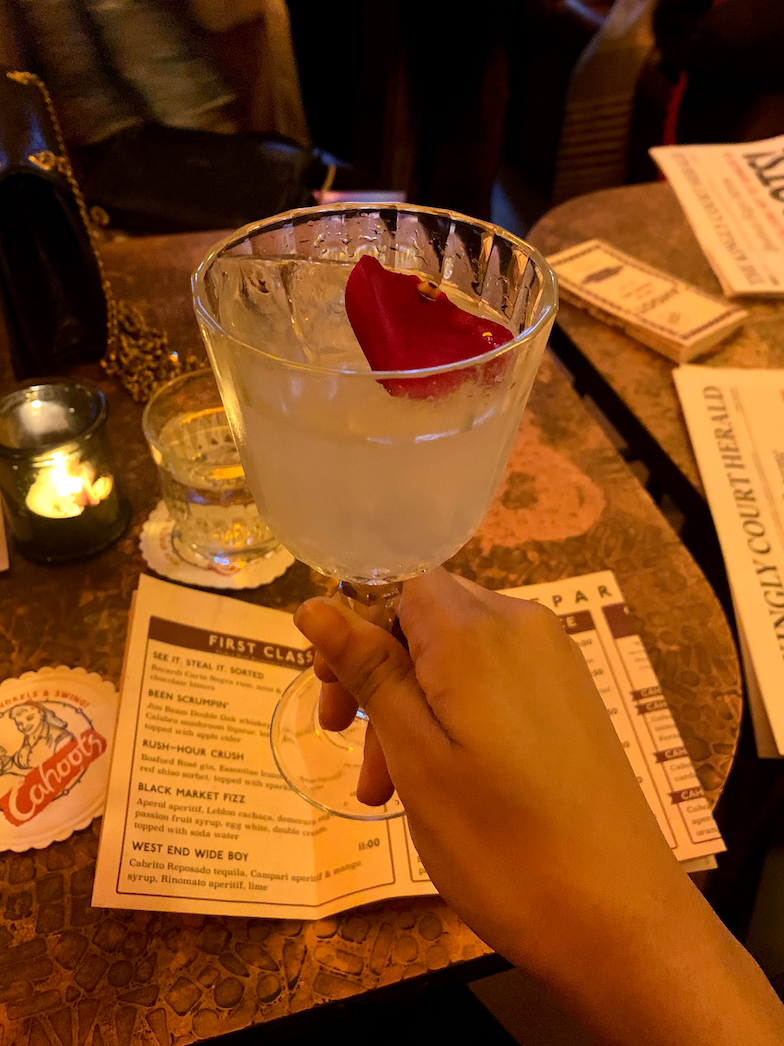 Order a drink upstairs before heading down below to explore the bar's speakeasy levels.

I’m a sucker for bars that transport you to another place or time, and Cahoots fit that bill. Already fun on its top floor—where newspaper-inspired menus line the tables and swing music plays from above—the underground speakeasy levels, housed in the former Kingly Court Tube Station, will take you back to 1940s London. A pro-tip: They’ll tell you the Judy Garland is the best drink on the menu—and they’re not lying.

London is a walking city—and after a long day out exploring, a big Italian comfort food meal nourishes the body and the soul. For this, Sicilian-inspired restaurant Norma is exactly what the doctor ordered: even after a hearty dinner of focaccia bread, wild mushroom and mozzarella arancini with truffle aioli, and aubergine parmigiana, you’ll still wish you had room for more. (And make room if you can: the cannolis still call my name.) 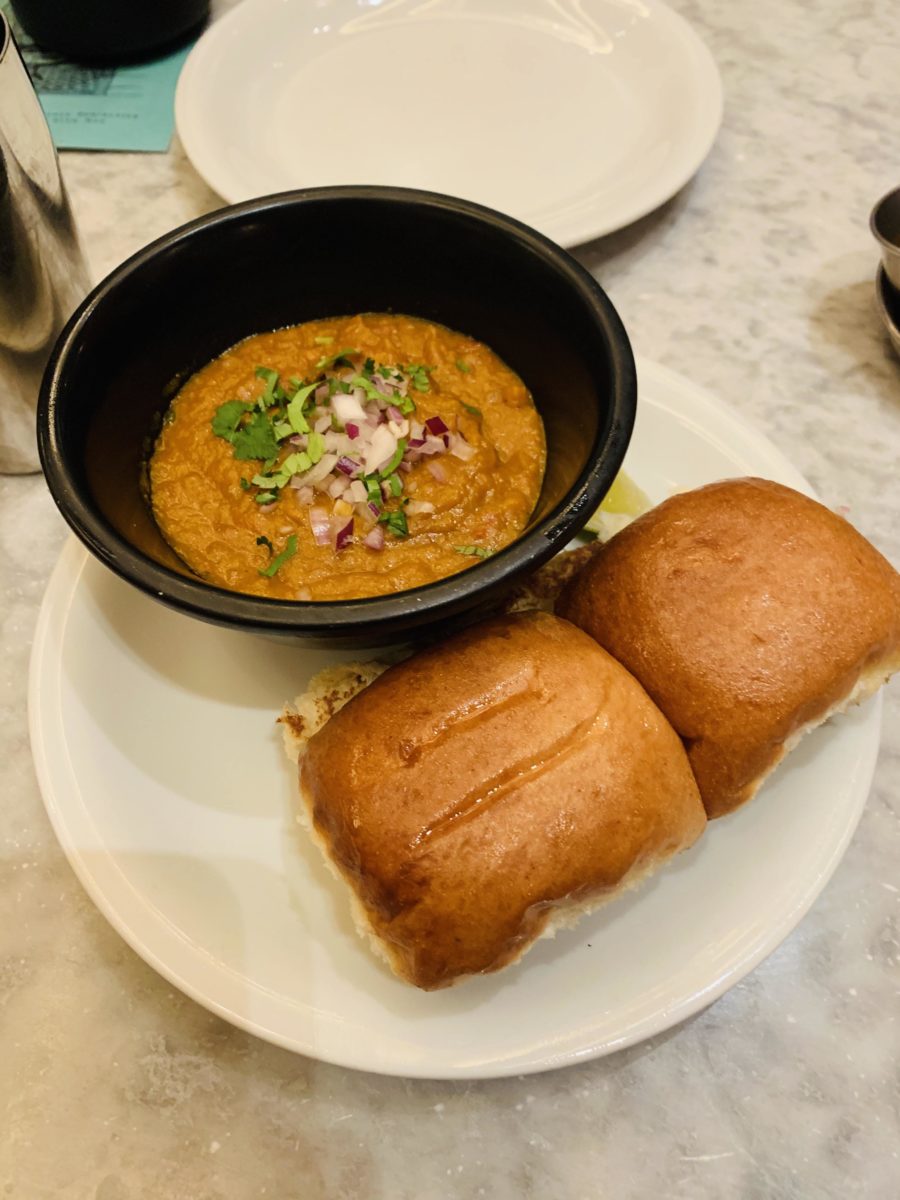 I finally made it to Indian restaurant Dishoom—and after several years of waiting, it did not disappoint.

Before I visited London for the first time, I did what any good traveler does: ask for advice from the well-versed. Of all the recommendations I received for eating out in London, Indian restaurant chain Dishoom was the one that showed up the most frequently—and most fervently.

After several years of missed connections, Dishoom was my last meal abroad before the many calamities of 2020 struck—and it absolutely delivered. Diving into pav bhaji (a soft bread roll with vegetable red curry), chole puri (spicy Punjabi curry with fried bread), and a cup of steamy chai on a rainy London afternoon is the meal memory that’s kept my spirit of travel alive, well, and ready for reignition during these last few months. (Plus, it cemented for me the city’s long-standing reputation as one of the world’s best cities for Indian food.)

Pastéis de nata—a sweet, creamy Portuguese custard tart—are one of my favorite desserts. I go out of my way to stop by one of the Cafe de Nata outposts every time I’m in London (no matter where I’m staying), and their tiny spot in Soho is just the place for a quick bite before darting off to your next adventure. 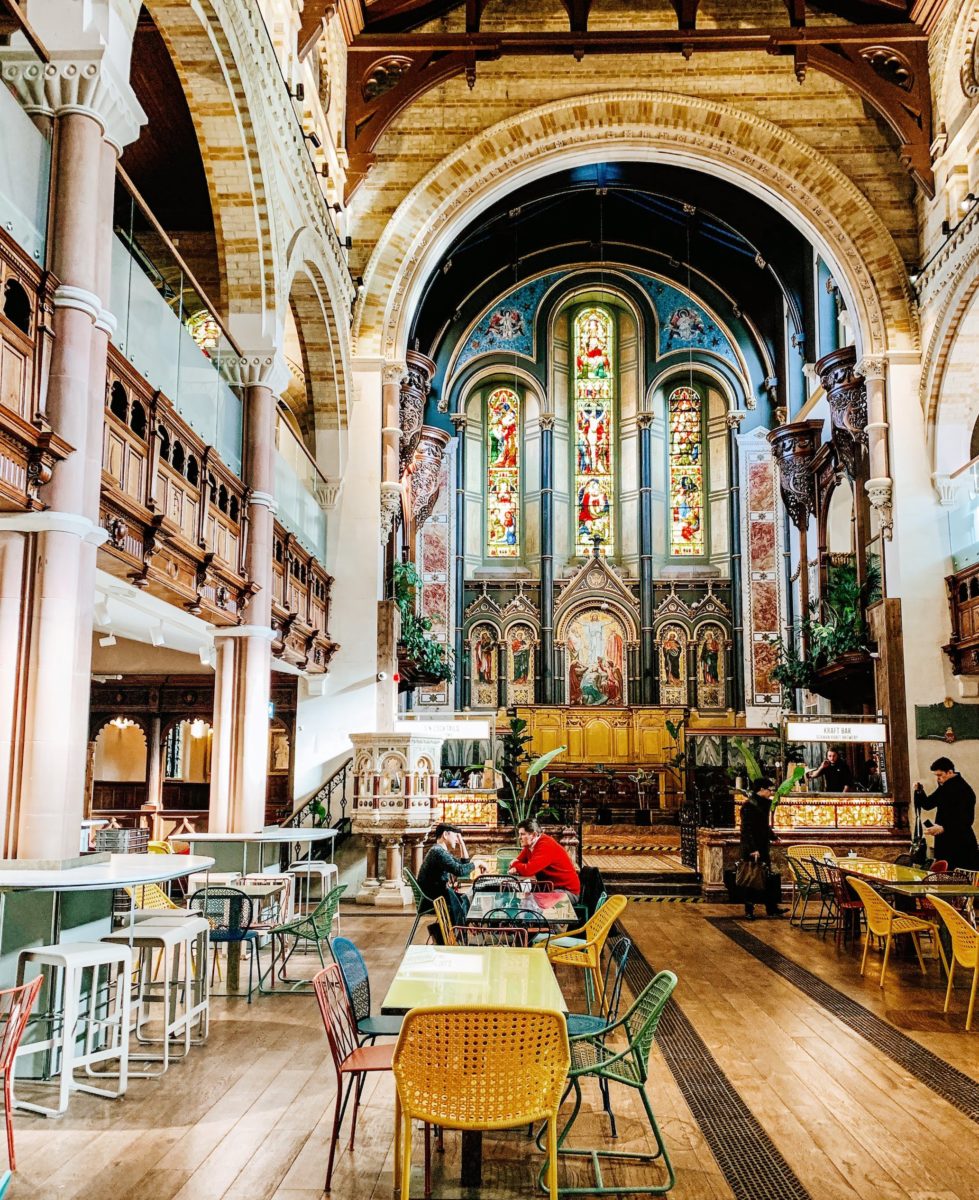 Now this is a food hall. Mercato Mayfair, I love you. 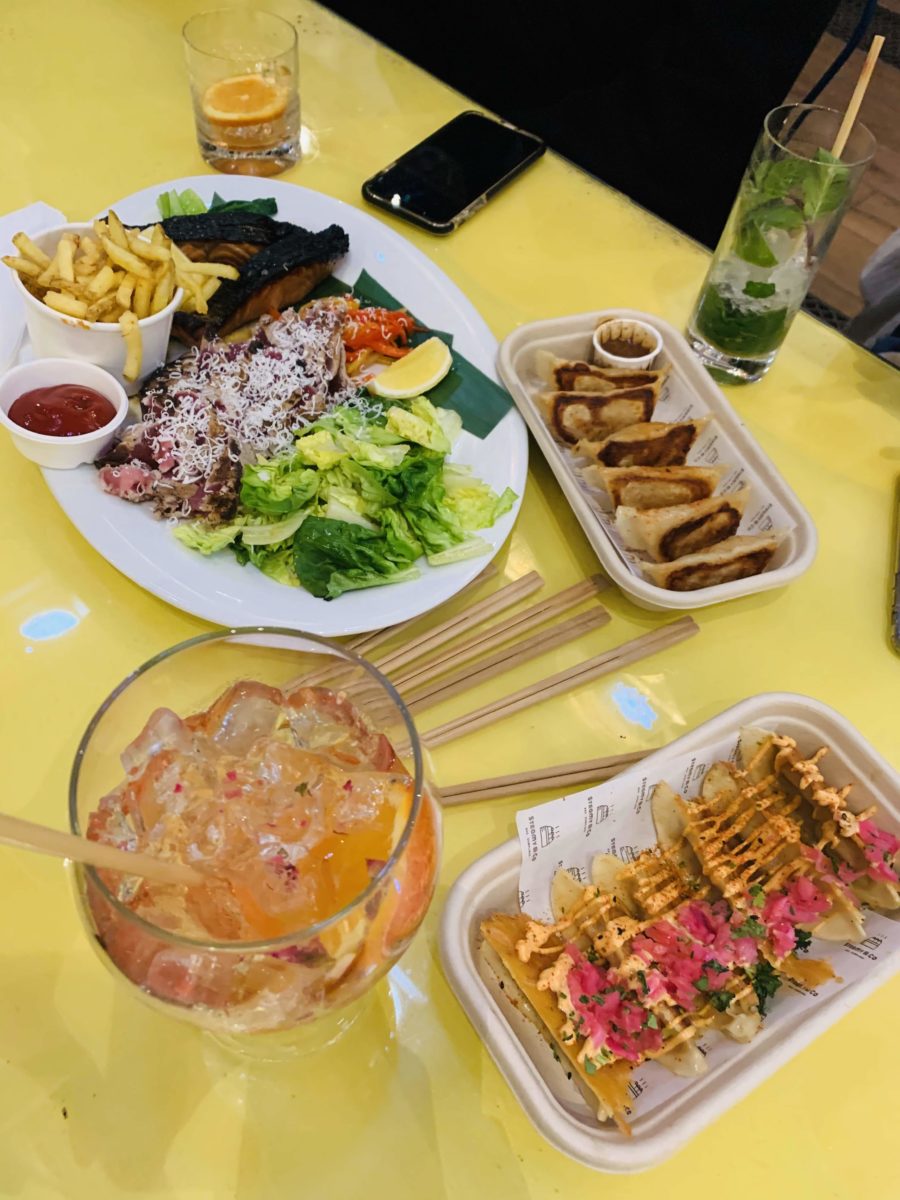 Mercato Mayfair excels both in interior design and in dining.

The Three Food Markets Not to Miss

While I’ll never be one to knock London classics like the Borough or Camden Markets (which, with several hundred food booths between them, are both worth a visit), if you’re looking to mix things up, the list of options—even in central London alone—is pretty inexhaustible. Three to start with:

Hit the two-story Mercato Mayfair—which, housed in a restored church, may be the most beautiful food hall I’ve ever seen. After a quick drink at Cha Cha Mayfair upstairs (it’s never too early for an Aperol Spritz), we tried Steamy & Co. for bao buns and Molo for seafood. If you’re in for an evening visit, don’t miss the basement Cheese and Charcuterie Vault and the Wine Bar for a treat and glass in rustic, intimate quarters. 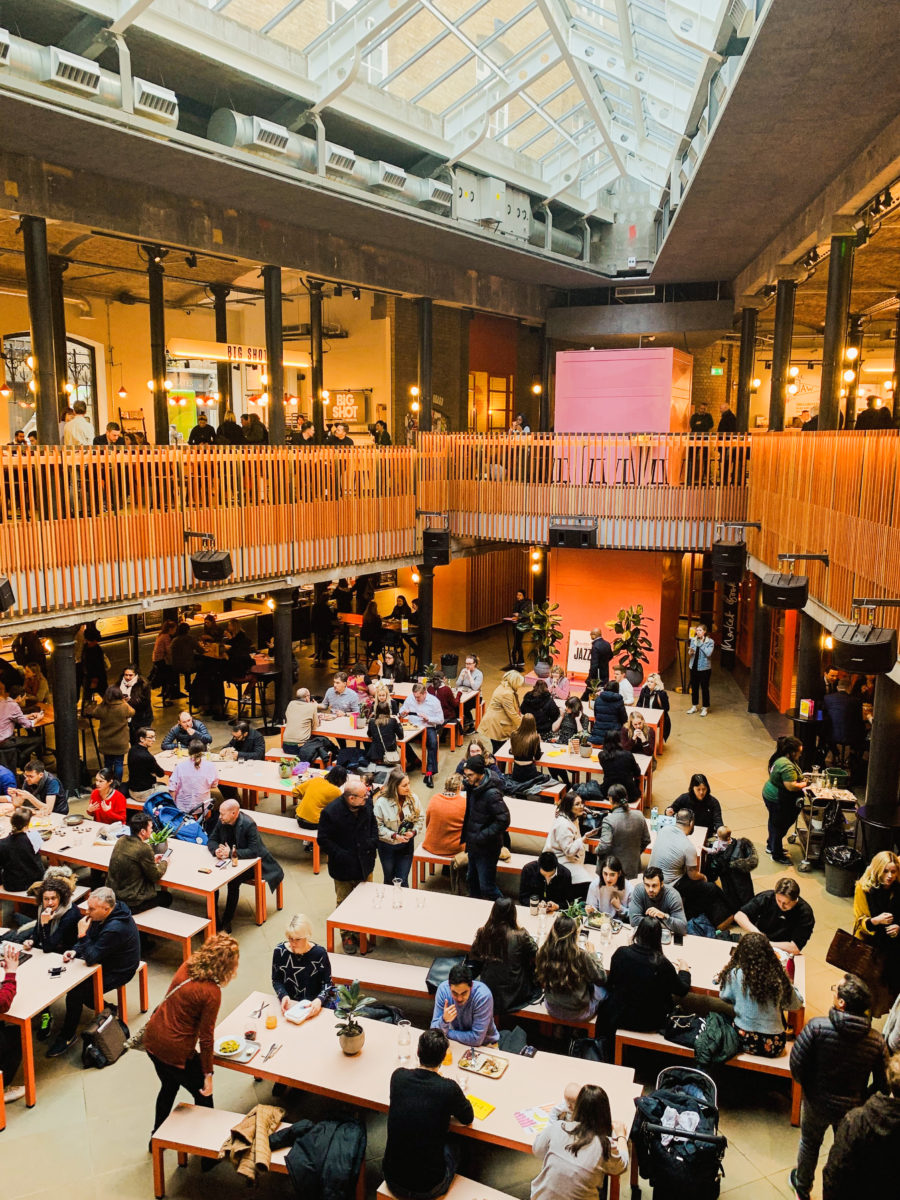 Opened in 2019, Seven Dials Market is a newcomer to London's food hall scene. 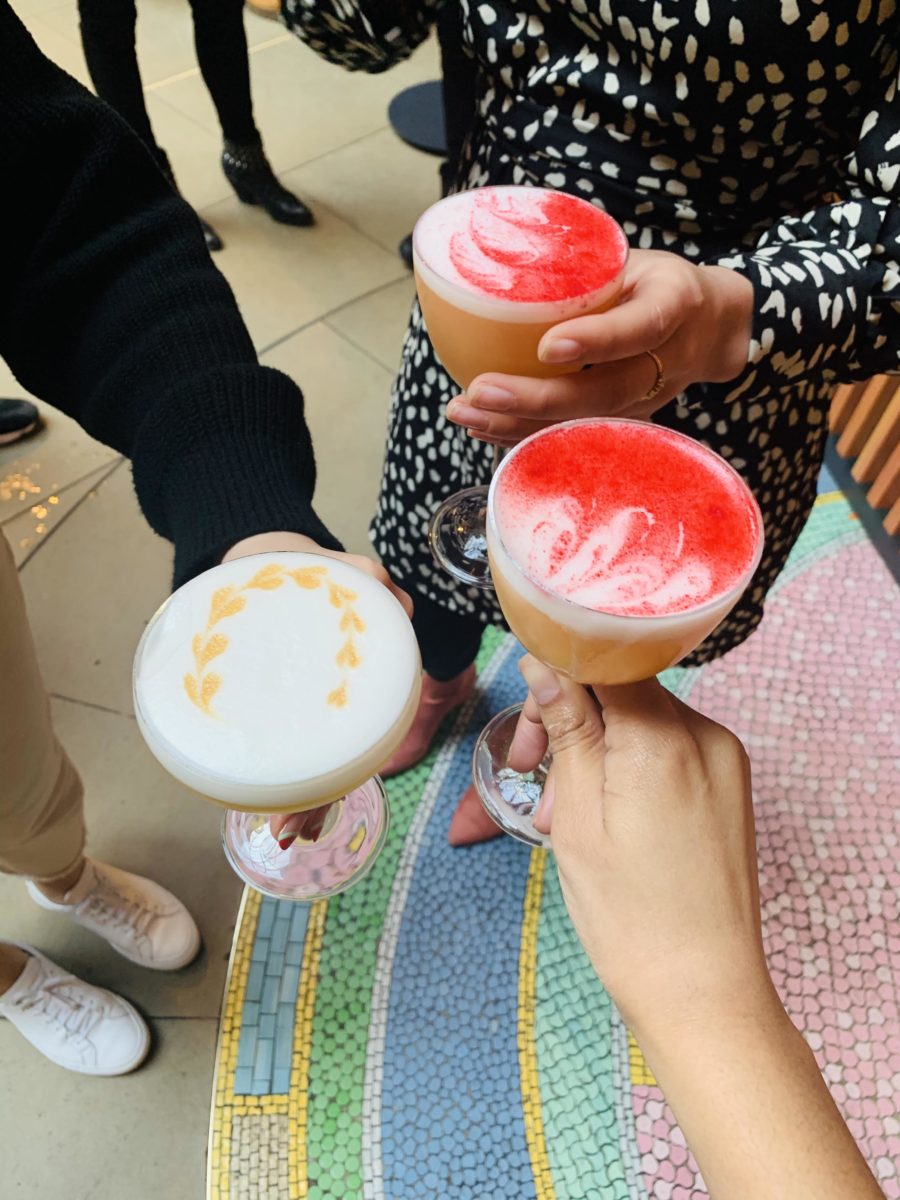 Visit the Seven Dials Market for—well, first, one more cheeky afternoon drink. (Pictured above, the Brick Lane Ambler from the KERB Bar, one of the tastiest and most colorful cocktails I’ve had in recent memory.) You will also find plenty of snacks to enjoy in this market, which just opened in 2019: try Truffle for some of the city’s best burgers and fries, u for steamed bao buns, and Pick & Cheese for—yes—the world’s first artisan cheese conveyor belt. 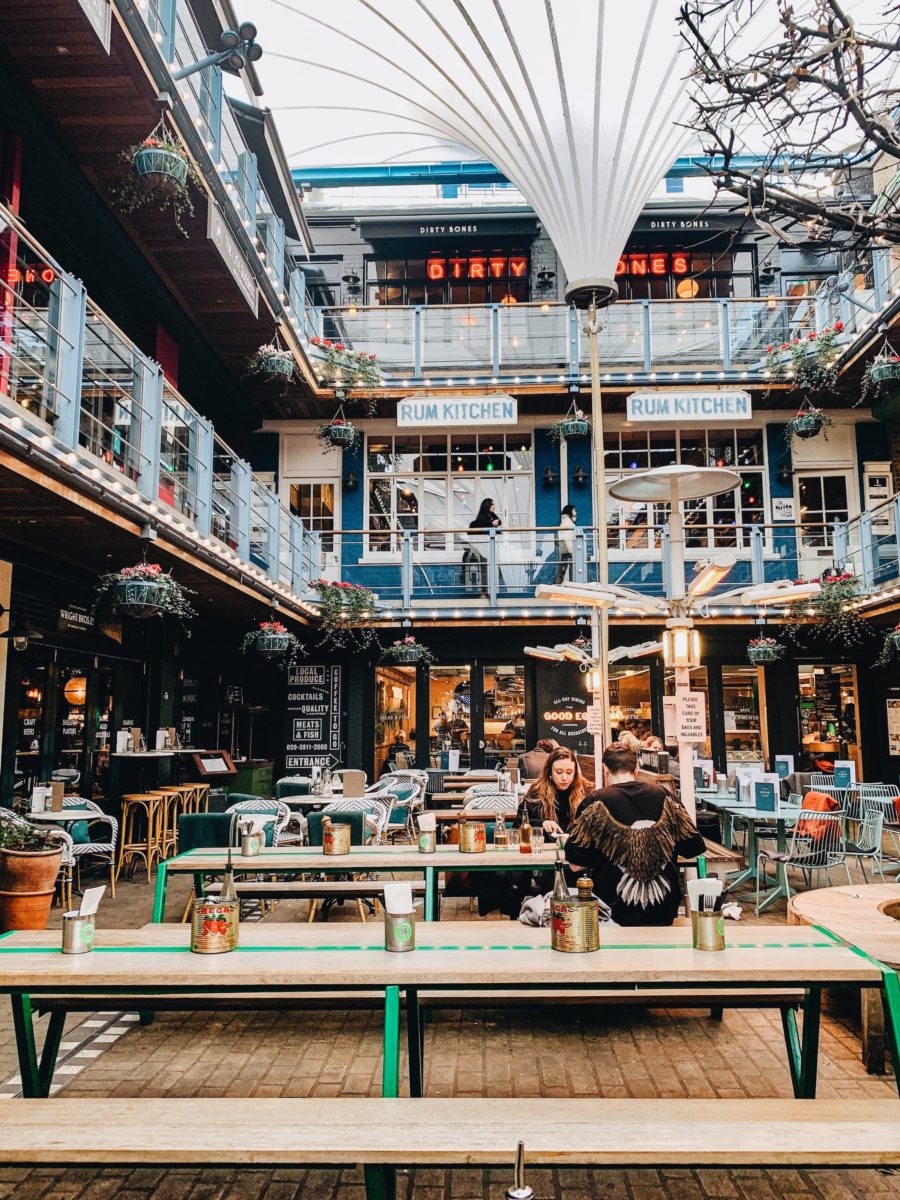 Enjoy three levels of indoor and alfresco dining at Kingly Court in Carnaby.