Everything You Need to Know About Dublin's Culinary Comeback

Over 150 years after the Irish Potato Famine, chefs in Dublin are making the most of what is now the world’s most food-secure nation. In the wake of Brexit, Ireland’s capital city has become a veritable foodie destination with a thriving culinary scene that’s both eclectic and progressive while also embracing tradition. For issue 08 of Here Magazine, we spoke with the chefs who are making it happen.

I’ve always liked butter. It makes most things just, well, better. I love it when it’s been sitting out for a while and spreads smooth and velvety onto my toast in the morning. I love it melted in my frying pan at home before adding an assortment of otherwise healthy produce. I love it at fancy restaurants, when they put just a pinch of flakey salt on top.

But I didn’t know how deprived I’d been of truly exceptional butter until I tasted the Irish version, which I now understand to be the dairy product’s platonic ideal, for the first time at The Shelbourne Hotel in Dublin. It was like I had been eating butter all my life, and suddenly I was tasting capital-B Butter—a dense, almost salubrious substance. As someone who mostly travels for the purpose of maximizing a city’s food experience, who plans itineraries around eating three square meals a day with breaks for coffee, snacks, and other digestible whims, I was caught a little off guard by this revelation.

When I expressed this sentiment to Andy McFadden, head chef at Glovers Alley, a fine dining establishment in the heart of Dublin, he said with the slightest bit of incredulity, “Well, you haven’t had our butter.”

The pride and care behind this domestically sourced delicacy struck me as rather extraordinary.

In his expansive kitchen, filled with the cozy smell of mid-bake Guinness bread, McFadden ushered me to his “butter fridge,” presenting rows upon rows of individually spiraled pats the color of dandelions. “It’s hand-rolled,” he said, and, most importantly, supplied by a woman named Allison Abernethy from County Down in Northern Ireland. Abernethy’s butter, I’m told, is slow-churned in small batches from cream supplied by a local dairy farm, giving it a distinct color and extremely rich flavor.

I’m not qualified to judge one Irish dairy product against another, but the pride and care behind this domestically sourced delicacy struck me as rather extraordinary considering the country’s devastating agricultural past. 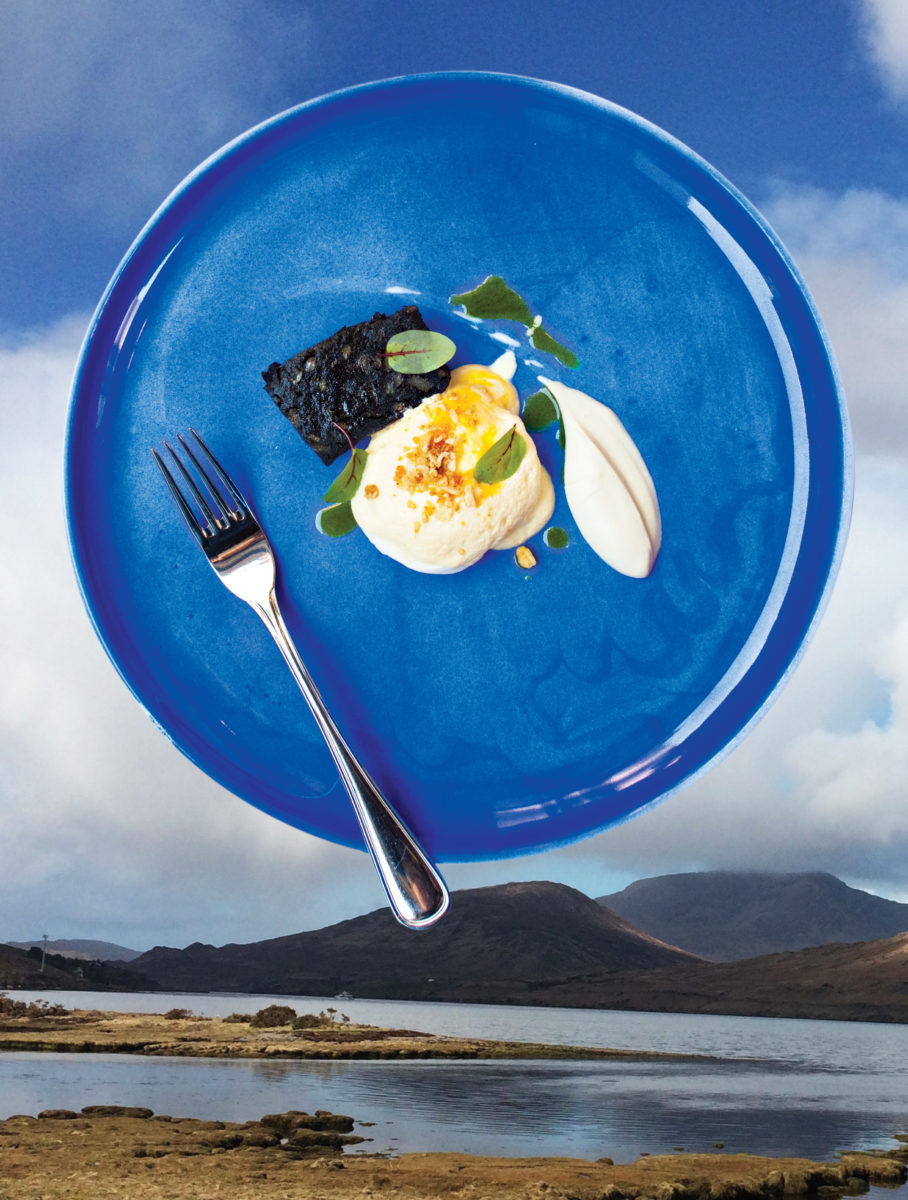 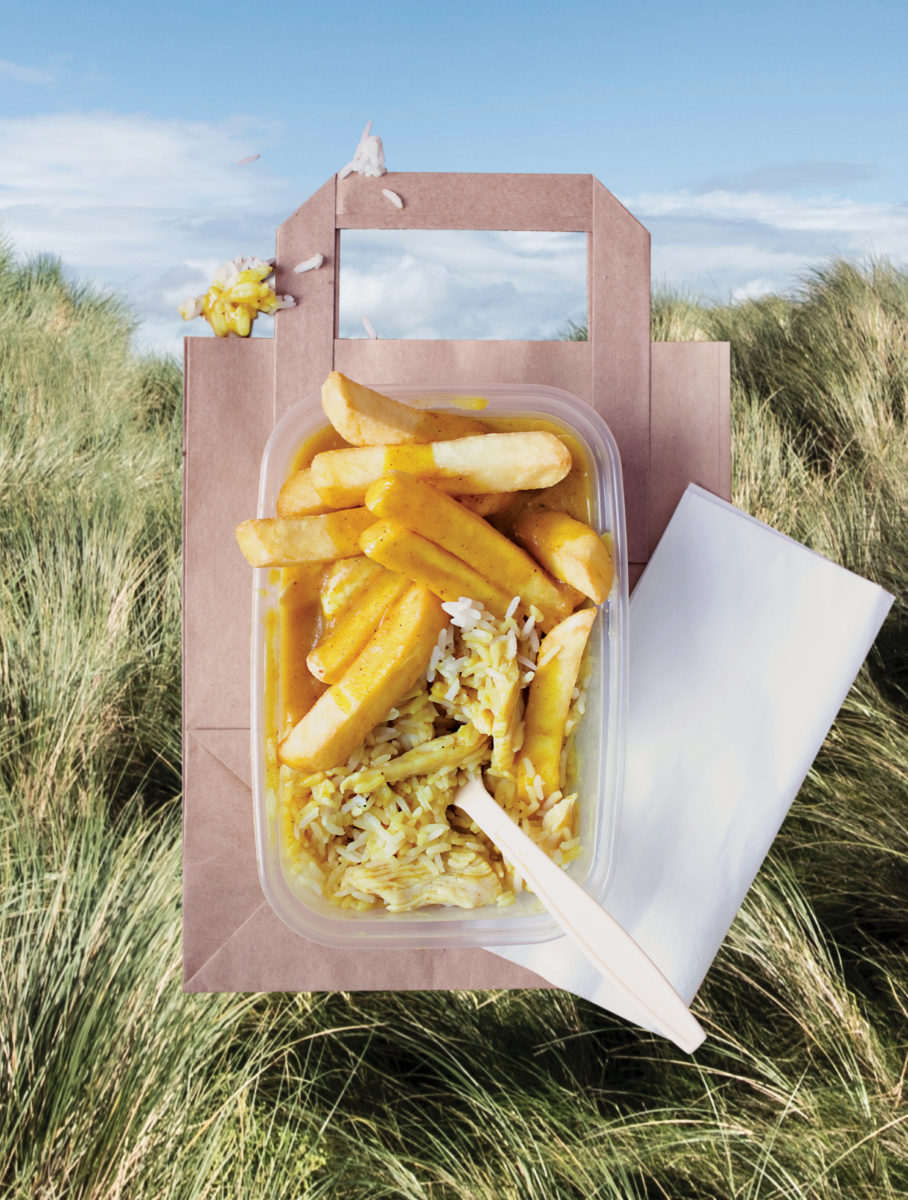 The 4-in-1: Dublin’s long-standing drunk food of choice can be acquired at any Chinese greasy spoon. The dish consists of four layers: fries, fried chicken, curry sauce, and rice.

“Our food culture has long been associated with shame, which comes from the aftermath of the famine,” confirms Holly Dalton, owner of newly opened Gertrude, an Irish-with-a-twist, all-day dining spot featuring more of those famous, locally sourced and seasonal ingredients.

The Irish Potato Famine wiped out over a million people less than 200 years ago, but much has changed since then. Dublin’s cultural and economic importance in the wake of Brexit has garnered the world’s attention: Businesses are moving their European headquarters to the Irish capital, and, while Britain and much of Europe seems to be trending toward closed borders and petulant nationalism, Ireland has largely avoided anti-immigration rhetoric, much less policy. After centuries in the grip of Catholic influence, it seems the traditionally conservative country is undergoing some progressive political shifts, including the recent legalization of abortion and the election of an openly gay prime minister.

“There’s a draw to come here, set roots down, and put Ireland on the map.”

It’s no coincidence that renowned Irish chefs are beginning to make their way back home after extended stints in cities with more culinary clout, like Paris and Copenhagen. McFadden, whose restaurant opened in February 2018 and features Irish flavors mixed with influences from his experience abroad, is just one such example.

“There’s a draw to come here, set roots down, and put Ireland on the map,” says Niall Davidson, another Irish chef who’s had spells abroad, specifically in London and Belgium, who’s now in the process of opening a restaurant at the Trinity Townhouse boutique hotel.

Read more about where to stay in Dublin: 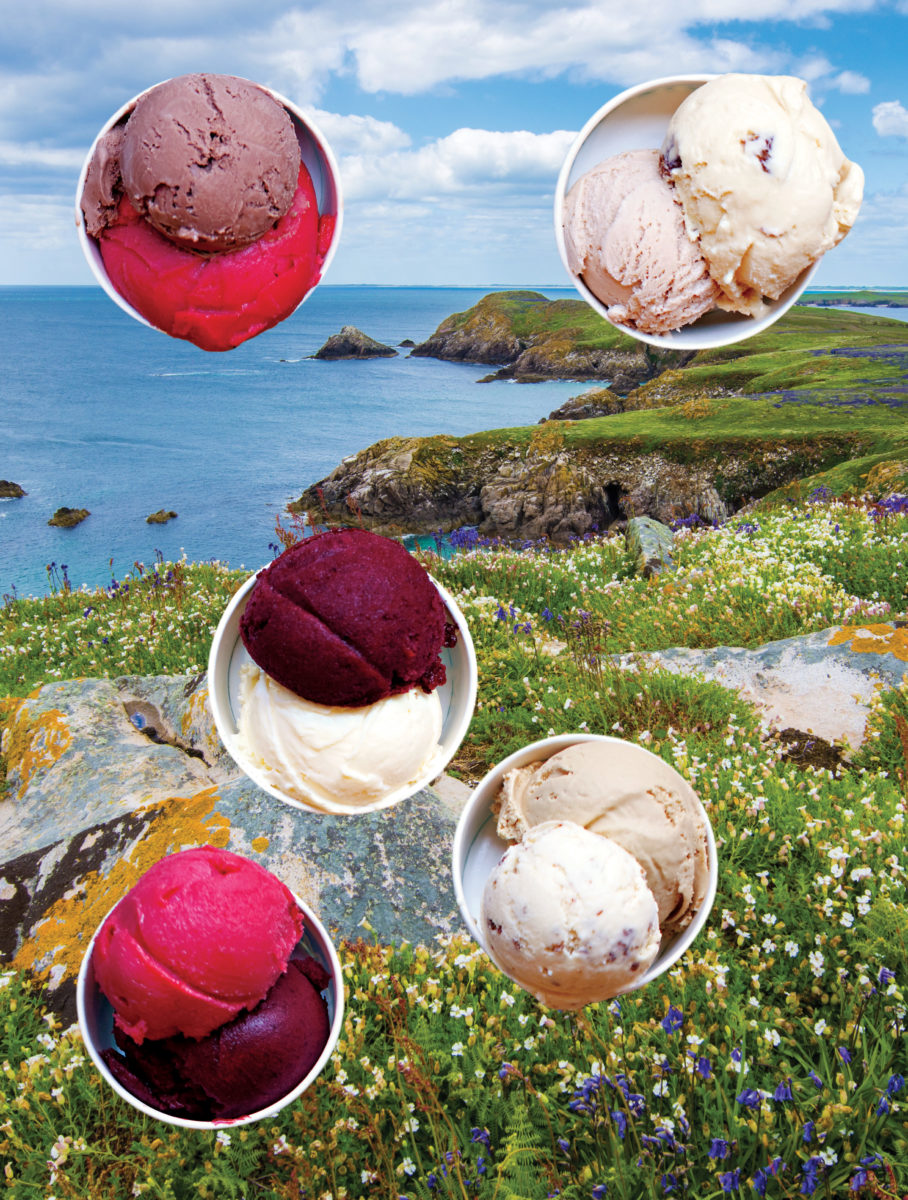 These chefs are entering into a lively and competitive market: When I visited the Irish capital in the fall of 2018, I heard that there were 42 new restaurants opening in Dublin in the next four months, a shocking figure considering it’s a city small enough to be walked in a single day.

Of course, fine dining spots like the Michelin-starred Greenhouse and The Saddle Room at The Shelbourne (voted best hotel restaurant in Dublin) have been around for years, but visitors haven’t exactly been flocking to Ireland for the food, focusing instead on pints of Guinness and a taste of the pub culture.

But since the famine, the recovered practice of subsistence farming has served the Irish well, especially when compounded with steady economic growth. The Economist Intelligence Unit reported last year that Ireland is now the most food-secure nation in the world, meaning it is better capable of feeding its own people than any other country.

Davidson is himself a product of subsistence culture, having grown up on a farm in Northern Ireland. “My granny, she grew everything,” he says. “She raised pigs, she carved turkeys at Christmas. She grew potatoes, scallions, rhubarb, and cabbages…”

While not all Dublin chefs had agriculturally skilled grannies, one penchant they all share is an eagerness to work with local food suppliers, like McFadden’s Abernethy butter, or The Whole Hoggs, Holly Dalton’s pork supplier, where nearly 100 pigs roam free in 60 acres of farmland.

Read more about where to get a good pint of Guinness and the best whiskey spots in Dublin. 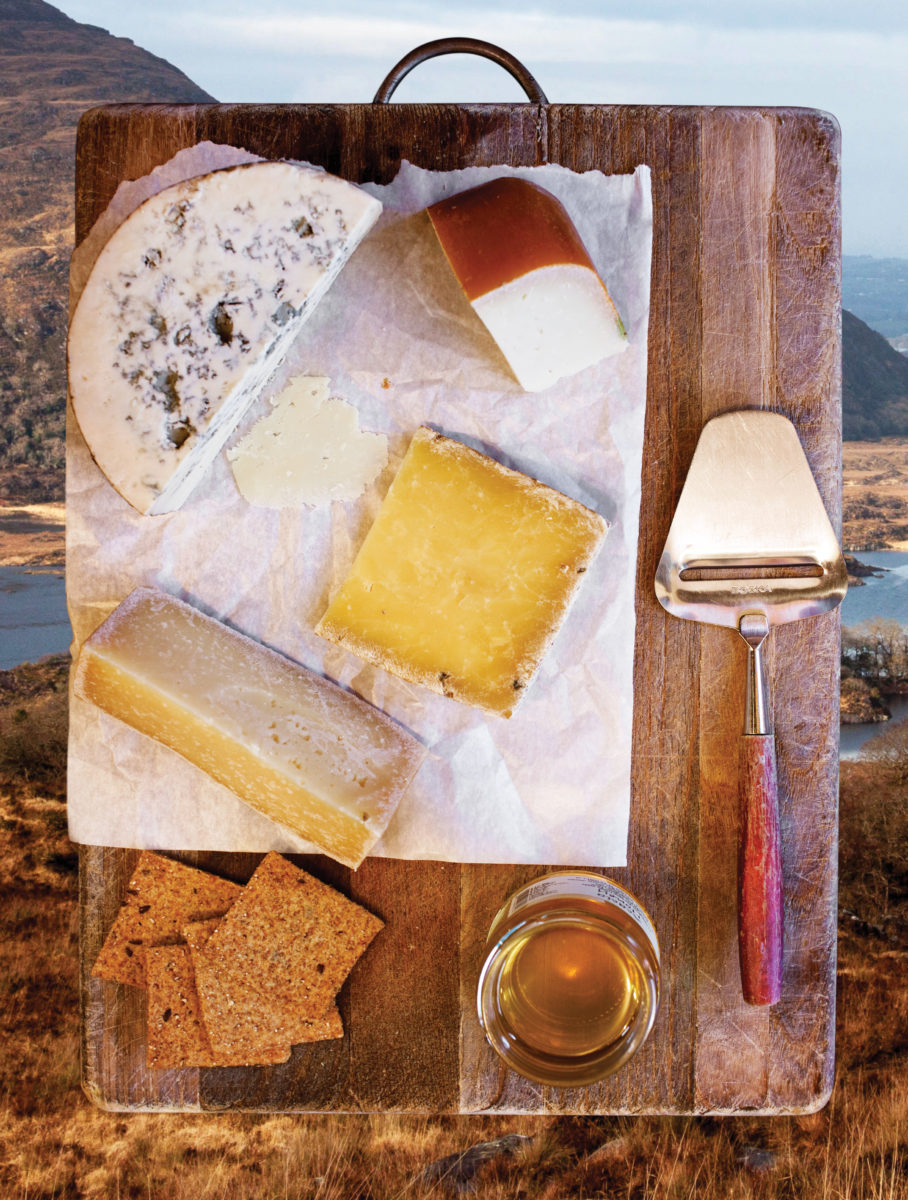 A spread of Irish cheeses from Sheridans Cheesemongers.

A longtime purveyor of local produce is the Irish-owned Sheridans Cheesemongers, a well-known cheese shop franchise with eight outposts all over Dublin and more throughout the whole country. Open 21 years, Sheridans supplies upwards of 27 Irish cheeses (and more from France, Italy, and elsewhere) to many chefs across Dublin. At the St. Stephen’s Green location, I sampled a range of Irish cheeses joyfully presented by the shopkeeper, including a Young Buck County Down blue cheese that is the most well-rounded blue I’ve ever had: salty and rich with a signature blue tang, the inside creamy—almost spreadable—with crumbly outer edges near the craggy rind.

But what is Irish cuisine? What should you come to Ireland to eat?

Even with the abundance of locally produced ingredients, misconceptions about quality persist even among the producers themselves. “It’s a fact of life that we just don’t have the same culture as France or Italy, where they were brought up to learn about and respect food,” McFadden says. “So when we go out to sample food from producers, they’ll sometimes actually be sort of surprised when we tell them how good their products are.” This insecurity surely isn’t helped by the inability to classify Irish cuisine as its own covetable, unique category. Italy has pasta; France has regional classics like beef Bourguignon—even Denmark, which boasts 31 Michelin stars, has earned a spot on traveling foodies’ must-visit lists. But what is Irish cuisine? What should you come to Ireland to eat? 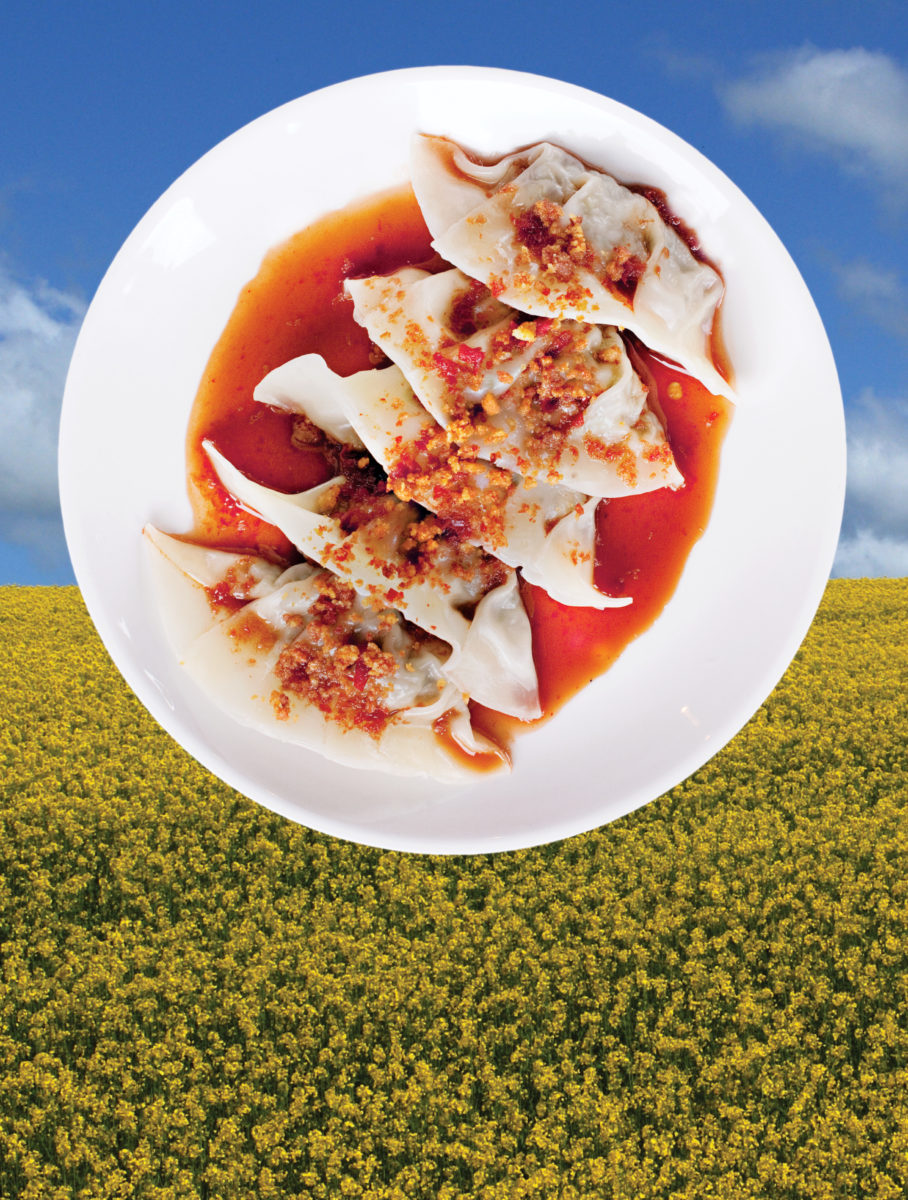 Gertrude: Cabbage and bacon dumplings reimagined, with a special bacon powder made by crisping the rinds, and topped with chili sauce.

Traditional Irish fare is heavy on animal products made with every square inch of a cow, sheep, or goat (from milk to marrow) and consists of hearty grub like lamb stew, cabbage and bacon with potatoes, and black pudding (a sausage cooked with pork blood). Vegetation is also abundant, however; wild flat-cap mushrooms that sprout in fields all over Ireland in the fall and the more than 20 varieties of seaweed from the Irish coast represent just a fraction of Ireland’s natural offerings. But chefs are not just limiting themselves to what’s native—new agricultural technology like polytunnels create greenhouse effects that make it possible to grow just about anything, for example—and neither do they seem particularly precious about upholding tradition. Some Irish chefs in Dublin are indeed creating elevated and inventive takes on the classics, but modernizing Irish cuisine isn’t all these chefs are interested in. “I’m pretty sure I could make a potato pretty tasty in a lot of ways,” says Davidson, “but it’s not necessarily going to excite you.”

For Davidson, modern Irish cooking has become “more personal” to whoever is cooking and the experiences they bring to the kitchen, using the abundance of Irish produce as a sort of playground for invention and personalization.

“The produce has always been here, and it’s time we start showcasing and being proud of what we have.”

But don’t think an Irish culinary renaissance means a deluge of stuffy, expensive dining experiences. Another mark of the Dublin food scene is a bias toward value. “It bothered me that my friends couldn’t really afford to eat in the places I worked,” says Dalton. In response, she set out to create the kind of restaurant her friends would be able to enjoy.

More mid-range restaurants like Gertrude are popping up, including Delahunt, the casual fine dining eatery built inside an old Victorian pharmacy where Prince Harry and Meghan Markle ate on their last tour of Ireland. At the latter, I tasted a beef cheek so delicate in texture and bold in flavor that my mouth waters just thinking about it. Dinner at either place will only run you around €30 to €45.

It’s clear that Dublin has a lot to offer in terms of a thriving food scene: exciting chefs, new restaurants, accessible price points. It’s the kind of place that reminded me why I travel for food in the first place. It’s not just about introducing the palate to novel experiences; you can learn so much about a place through the food it produces.

“The produce has always been here,” says Dalton, “and it’s time we start showcasing and being proud of what we have.”