Get Ready to Visit Denver From the Comfort of Your Home

The best food, online experiences, movies, shows, books, music, and etiquette to know before a trip to Denver, Colorado.

One of our top cities to visit in 2020, the possibilities in Denver, Colorado, are essentially endless for any and all traveler types: Foodies, artists, adventurers, musicians, outdoor enthusiasts, brewmasters, and even the lovable stoner are all welcome in the Mile High City.

Whether you’re attracted to Denver because of its recent spike in popularity or simply because you’re after their liberal lifestyle, read below for a virtual introduction to Colorado’s capital, including the food to try, music to know, movies to watch, and etiquette to learn before you go. 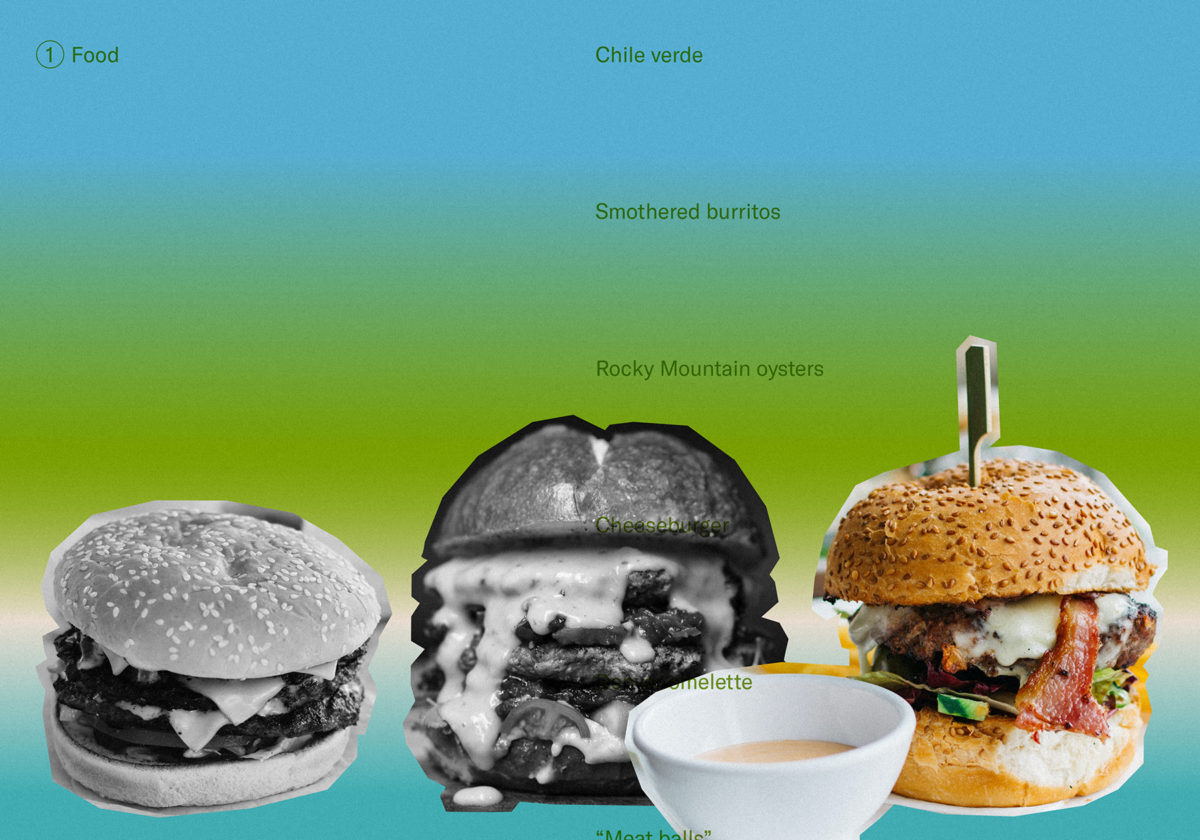 A number of U.S. cities, including Los Angeles and Louisville, Kentucky, claim to be the birthplace of this All-American classic—but the official trademark first went to Louis Ballast of the Humpty Dumpty Drive-In in Denver in 1935. Although most folks know how to grill one of these up, here’s how to go forth in pursuit of making the perfect cheeseburger.

Hello, spicy food lovers—it’s your time to shine! Perhaps an unexpected favorite, chile verde is popular throughout Western states—including Colorado, where people often argue with New Mexico natives over who makes the better green chili. This slow-cooked dish is chock full of pork simmered in broth, alongside green chiles, tomatillo salsa, onions, garlic, and herbs. Some of the best chile verde recipes take up to five hours to cook—but are so good they may only take five minutes to eat.

Another beloved Western meal that shines in Colorado, if the words “smothered burrito” don’t make your stomach rumble immediately, we simply don’t know how to help you. A stuffed burrito smothered in gooey melted cheese and red enchilada sauce, your taste buds will thank you for following this recipe  (and for vegetarians, feel free to replace the beef with beans or another filling of your choice).

“Colorado is completely landlocked,” you may be thinking. “Why are oysters so popular?”

Well, for starters, these oysters don’t come out of the water. Rocky Mountain oysters—sometimes called “meat balls” or “cowboy oysters”—are actually deep-fried bull testicles. Don’t let this deter you! This classic Colorado appetizer, coated in flour, salt, and pepper and dipped in cocktail sauce, is a must-try.

Give your mornings a Midwestern upgrade with this twist on a classic omelette, where you’ll bake onions, peppers, and smoked ham into the center of cheesy, soft eggs. Try this simple recipe at home yourself; your weekend brunch will thank you. 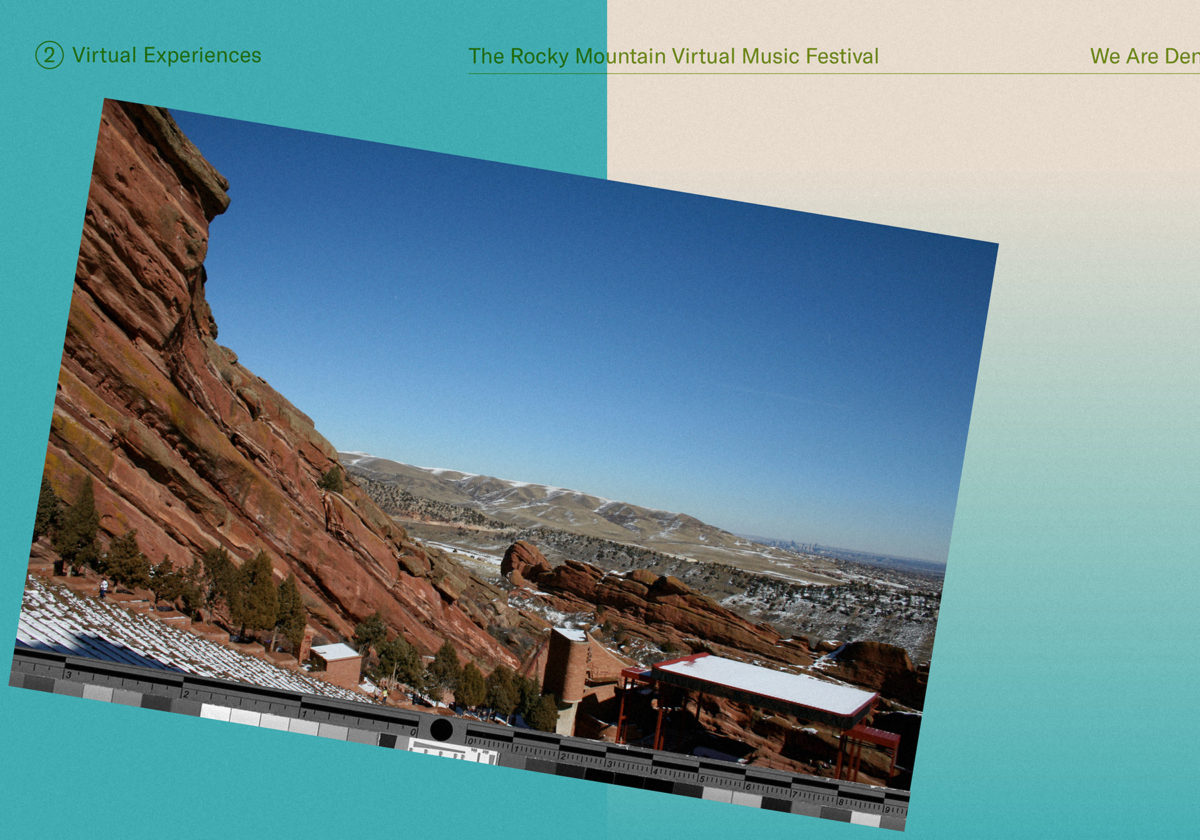 The 24-hour We Are Denver stream loops through 12 hours worth of content updated with new segments every weekday at noon. Tune in for interviews with and performances from locals, including the chefs, artists, writers, teachers, performers, and other community members making the city a destination to watch. Bonus: If you see someone you’d like to support, creatives’ social tags are always included alongside their videos.

Denver is a quickly-rising hotspot for American artists, and plenty of the community’s work can be viewed online. For starters, check out the Denver Arts & Venues Public Art Collection, whose detailed map shows off public art like murals and sculptures scattered throughout the city; the Denver Art Museum, whose full collection is available online and also offers guided gallery tours on Youtube; or the RiNo Arts District, which documents the work of the best up-and-coming and established artists in Denver on their website.

Red Rocks Amphitheatre, just outside of downtown Denver, is surely one of the most impressive concert venues in existence. For those unable to travel into the mountains and experience a performance in person, thousands of people per week currently tune in to the Rocky Mountain Virtual Music Festival, a weekly music series with performances, giveaways, and more. You can experience the Rocky Mountain Virtual Music Festival online here. 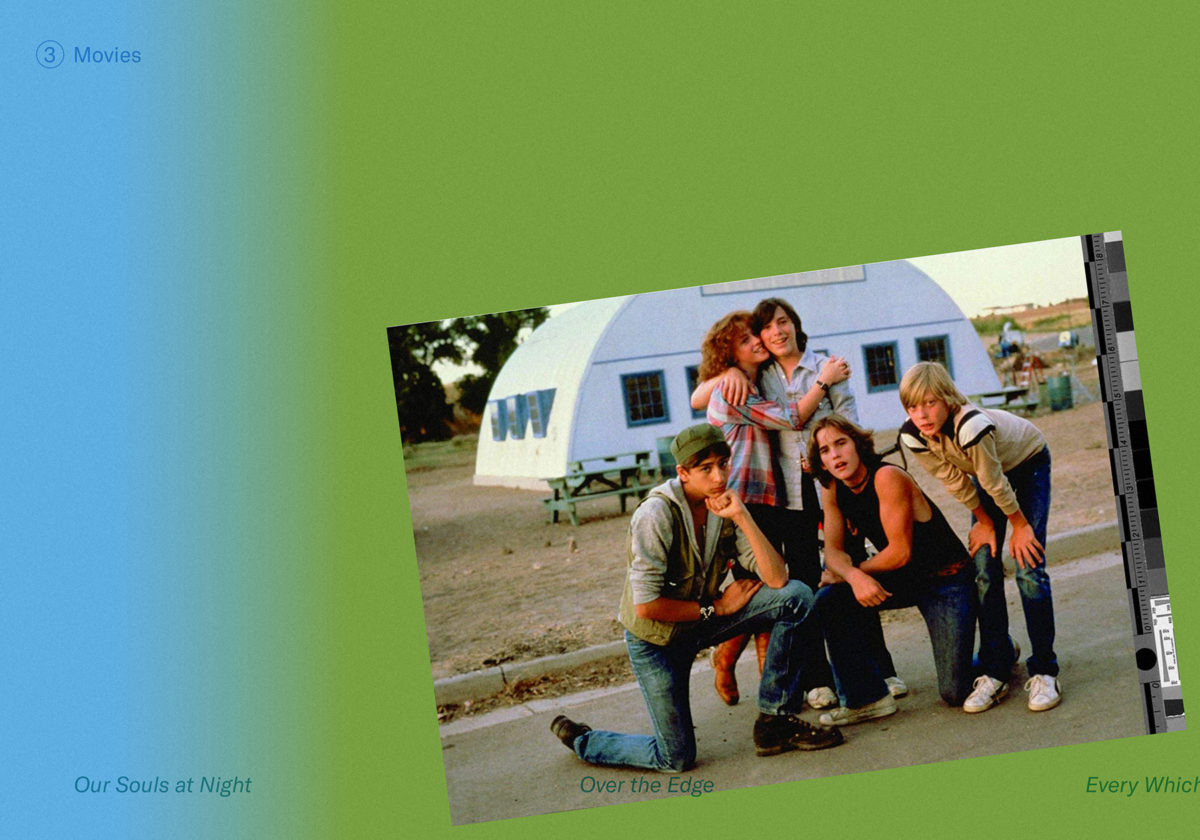 Author Kent Haruf, one of Denver’s best literary exports, sees his 2015 novel come to the screen in this Netflix drama. Two neighbors, a widow and a widower, begin platonically sleeping in the same bed to stave off loneliness while grieving. But before long, a romance develops between the two as they accompany one another on the road to healing. Watch Our Souls at Night on Netflix now.

Based on a true story, this cult classic film follows a group of teens coming of age just outside of Denver in the fictional planned community of New Granada, Colorado. Being bored in what feels like the middle of nowhere eventually leads them to pass the time with partying, drinking, drugs, and vandalism—and what begins as teenage delinquency quickly turns into a full-blown crime drama. You can watch Over the Edge on Youtube or Prime.

This action-comedy film features Clint Eastwood as Philo Beddoe, a truck driver living with his orangutan, Clyde, in California. (A strange start, we know, but work with us.) One night at a bar, he meets up-and-coming country star Lynn Halsey-Taylor and quickly realizes he’s fallen in love with her. Beddoe, joined by his brother Orville and Clyde, sets off for Lynn’s home in Denver, Colorado—getting involved with a motorcycle gang, a cop, and more as he makes his way across the American West. Watch Every Which Way But Loose on Youtube or Prime.

6 International Films to Transport You Elsewhere → 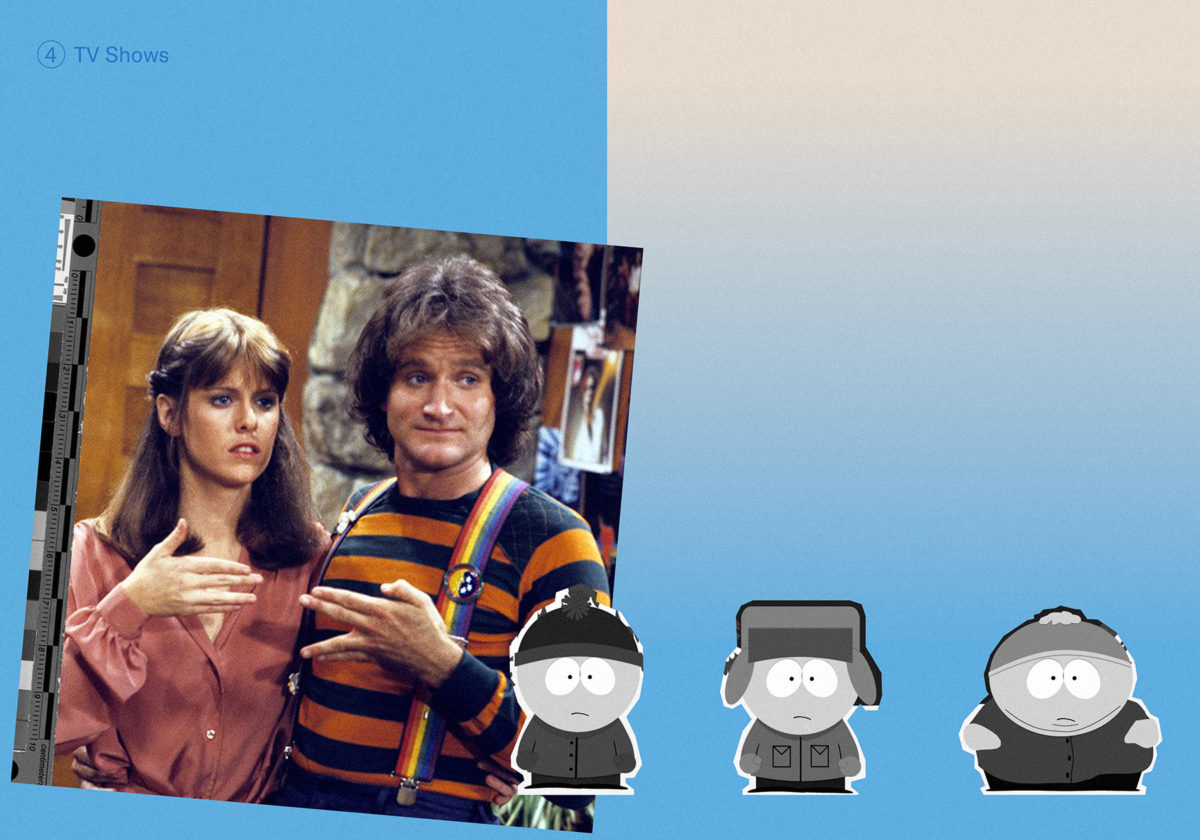 South Park may be an acquired taste, but it is a taste worth acquiring! On air since August 1997, this classic cartoon dogs on major figures and events in politics, celebrity culture, and more, turning usually-serious topics into an absurdist wonderland. Although it doesn’t technically take place in Denver—Stan, Kyle, Kenny, Cartman, and the rest of the gang allegedly live in the fictional town of Fairplay, Colorado—the creators of the show all grew up in Colorado’s capital. Watch South Park on Hulu, Youtube, or on the South Park website.

One of the most popular shows of the 1980s and often considered a landmark series for women in television, Dynasty follows the Carringtons and the Colbys, two families vying for control of an oil empire in Denver.  A reboot of the original Dynasty soap debuted on CBS in 2017 to rave reviews (although the new version transplants the drama to Atlanta, Georgia). You can watch the original Dynasty series on Youtube or Prime.

Another venture into the absurd, this 1978 series features the late, great Robin Williams as Mork, an alien come to planet Earth who lands in Boulder, Colorado. It’s here he meets Mindy McConnell, a journalism grad student, and—with her friendship and guidance—attempts to adjust to human life. Robin Williams being who he was, the result is just as charming and funny as you might expect. Although it isn’t available for streaming, check out a preview of Mork and Mindy on Youtube and order the full series on Amazon if you decide to go all in. 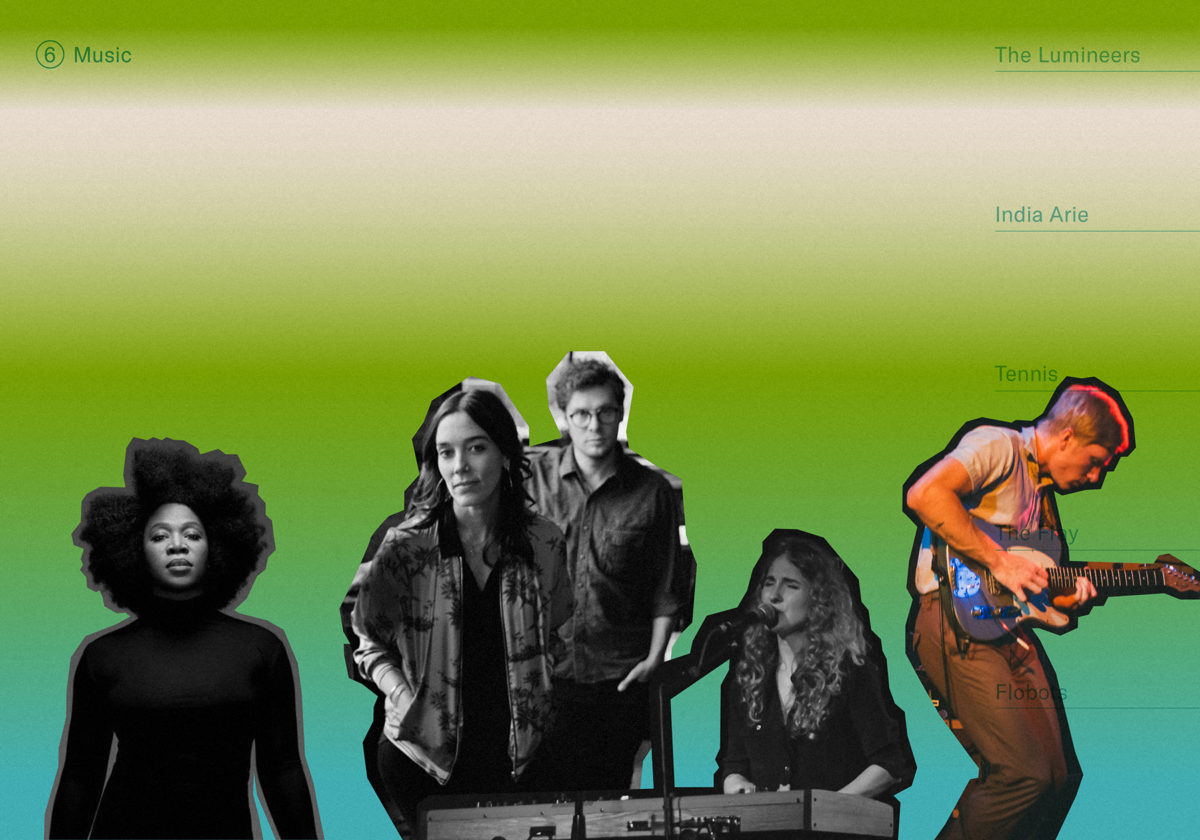 Another popular fictional tale from from Denver native Kent Haruf uses the stories of several characters—a single father attempting to raise his teenage sons after their mother leaves town, a pregnant teenage girl searching for a new place to call home after rejection by those she once relied on, and two brothers living a relatively isolated life in the Colorado countryside—to paint a picture of human grief, empathy, and hope.

Murder at the Brown Palace by Dick Kreck

On May 24, 1911, Frank Henwood entered the Brown Palace Hotel shooting and killing Sylvester Louis “Tony” von Phul—with whom he competed for the affections of local socialite Isabel Springer—along with bystander George Copeland. Riddled with luxury and seduction, fans of true crime and history will devour this retelling of one of Denver’s most famous murders.

After burnt-out graduate student Shay Dixon receives a vision from her idol, late jazz icon Nina Simone, while on the verge of a nervous breakdown, she decides to temporarily return home to Denver, to make peace with her mother, a recovering alcoholic. Still living with pent-up anger from a turbulent childhood, Shay must work to heal her relationship with her mother and herself.

Although Judy Blume’s coming-of-age books raised many of us, you’ll be happy to know that her fiction can follow you into adulthood. In Smart Women, two recent divorcees, Margo and B.B.,  attempt to rebuild their lives in Colorado and are met with trouble when Margo falls for her next-door neighbor—who also happens to be B.B.’s ex-husband.

Modern patron saints of folk rock, the Lumineers got their start in Denver in 2005 and have remained popular on the Americana circuit ever since. They rose to international recognition with the 2012 hit Ho Hey, one of the most ubiquitous songs of the summer that year.

Born and raised in Denver, India Arie rose to fame at the turn of the century, signing to legendary label Motown Records before releasing her debut album. Since then, Arie has won four Grammy Awards, including a win for Best R&B Album, and sold over 10 million records.

Husband and wife Alaina Moore and Patrick Riley have been on the music scene as Tennis since 2010. You’ll love them not just for their dreamy indie pop tracks, but for their incredible aesthetics: Moore’s curly locks and the couple’s 70s-inspired outfits make them look as if they’ve been cut out of a vintage postcard.

If you’ve never dramatically sung along to How to Save a Life, where were you during the early 2000s? The Fray’s discography consists of powerful indie track after track. (Honorable mentions to You Found Me and Over My Head, which are just as good now as they were when they first debuted.)

One of Denver’s most unique acts, this experimental group specializes in rap rock, more recently using their music to address themes like climate change, immigration reform, and political and social activism. In 2017, Flobots collaborated with Denver professional ballet company Wonderbound on a hip hop ballet, some of which you can check out online here. 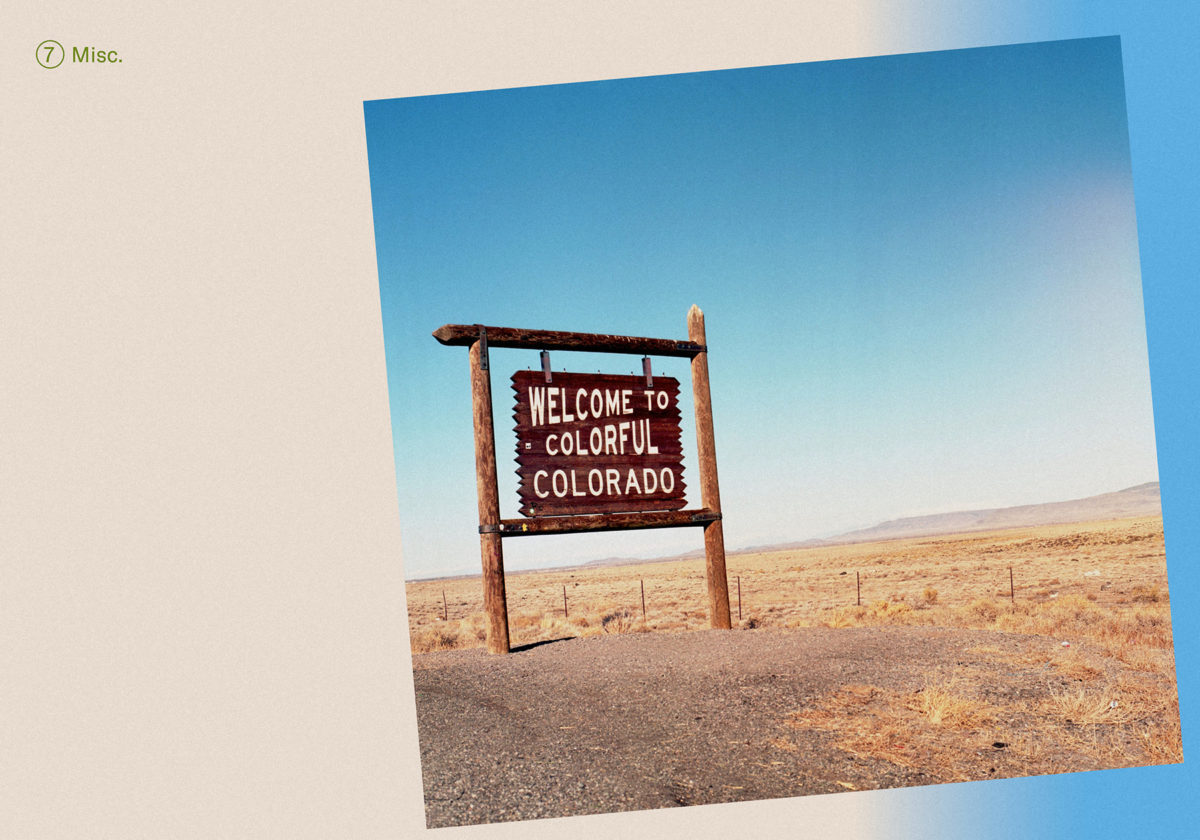 Know Before You Visit Denver

Denver is actually called the mile high city due to its elevation—but being the capital of the first state to legalize recreational marijuana certainly cements the nickname. If you choose to imbibe, familiarize yourself with Denver’s weed etiquette before visiting a local dispensary and you’ll be on your way to a good (and well-informed!) time.

We repeat: Denver’s elevation positions the city a mile above sea level! That shift in altitude can have serious effects on the body, so it’s important to monitor yourself during the first few days of your visit as you adjust. Make sure you drink plenty of water and consider refraining from alcohol the first day you’re in town to see how the environment affects you.

Denver is one of the sunniest places in the U.S., receiving an average of 300 days of sunshine a year! While you’re soaking up some good old Vitamin D, keep your skin’s health in mind and make sure to keep your sunscreen at the ready.