At 23, Daniela Soto-Innes became the head chef at Cosme, New York City’s hottest Mexican restaurant. Almost six years and many awards later, it’s her innovative leadership that has had the greatest impact.

The 6 train is the last leg of the trek from my Brooklyn apartment to Cosme, Enrique Olvera’s high-end modern Mexican restaurant in Flatiron. I exit at 23rd Street, passing the city’s usual suspects: huffy suits running late for the Big Meeting, a divey CVS. Around the corner from the restaurant, however, I lift my eyes from the gum-speckled sidewalk to see a line forming outside the Guatemalan consulate on Park Ave. Single adults and families with small children are standing around patiently, waiting for it to open. It’s early in the morning and many of them look tired—as though they’ve traveled a ways to reach these bureaucratic doors—but expectant. The mundanity is a poignant contrast to news from the U.S.-Mexico border—and it puts my 45-minute subway commute into perspective.

I’ve come to Cosme to speak not with head chef Daniela Soto-Innes—who is currently in Oaxaca with her fiancé—but with her staff. I’ve already talked to the almost-29-year-old chef (her birthday is a week after we chat) once at the restaurant and once over the phone. It doesn’t matter that in 2019 she became the youngest recipient of the World’s Best Female Chef award, or that Cosme is ranked as one of the World’s Top 50 Restaurants; both times, Soto-Innes has so much more to say about her employees than her own accolades that I figure it’s through them that I’ll get to know her best. 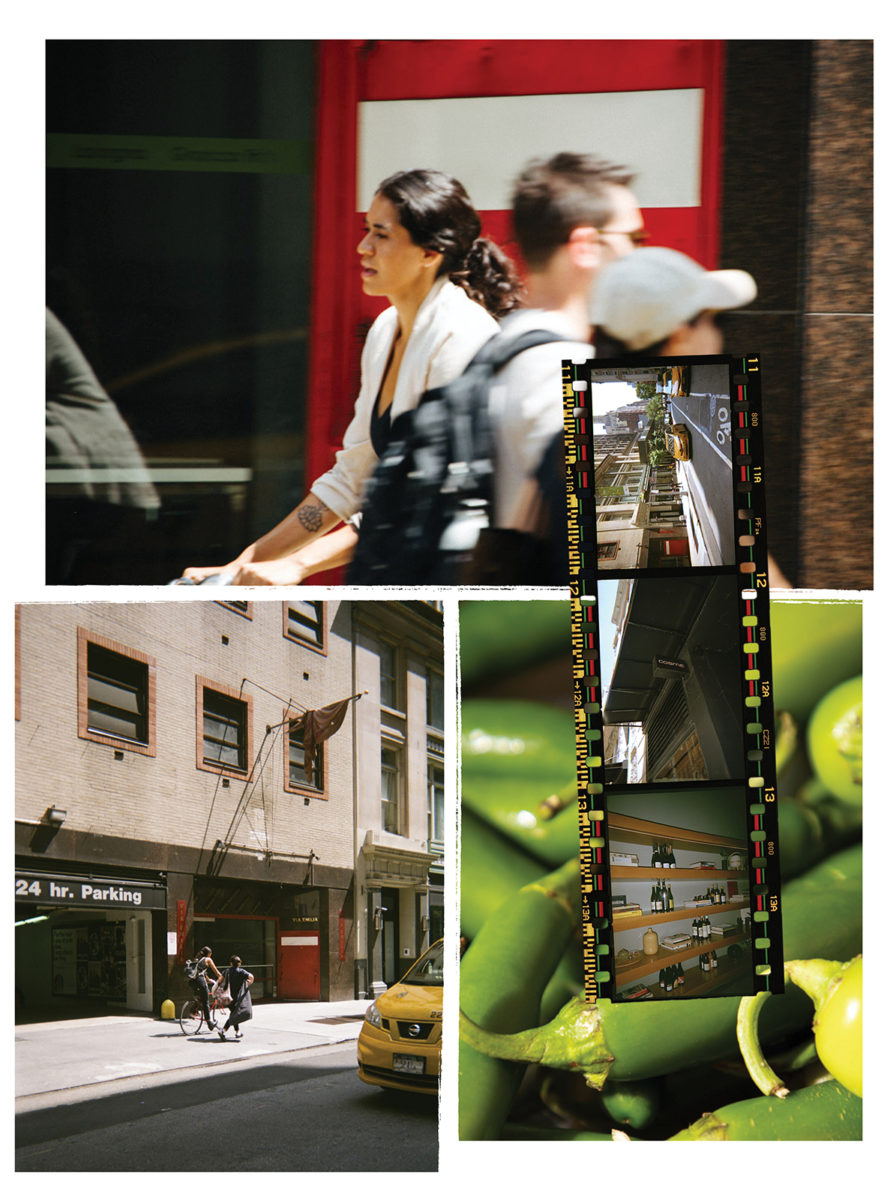 Soto-Innes rides a red bicycle between Cosme, in Flatiron, and Atla, in NoHo. Film by Natalie Shields.

Waiting for me at a table near the front are three of Soto-Innes’s best friends: pastry chef Isabel Coss, kitchen manager Valentina Brito, and Valentina’s twin sister, sous chef Estefanía Brito. “Knowing Dani as a person is amazing, working with her is amazing. Being her friend…” Coss lets out a big sigh. “I must have done something good in my last life.”

Of the three, Coss entered Soto-Innes’s orbit first. Back in their native Mexico City, the pastry chef had worked at Pujol, the more-famous and even higher-end Olvera outpost where Soto-Innes also worked before coming to NYC—though they didn’t actually meet until Soto-Innes moved up north to open Cosme with Olvera in 2014. Then came Estefanía, who left home in Venezuela to attend culinary school and cook in Spain, before arriving on Cosme’s doorstep. Finally, there was Valentina, who had never cooked a day in her life—but during a three-month visit to NYC, Soto-Innes saw something in her. A year later, under Soto-Innes’s tutelage, she became one of the fastest cooks on the staff.

“With the right culture and someone pushing you, you’ll make an amazing, badass cook in a year,” Coss weighs in. 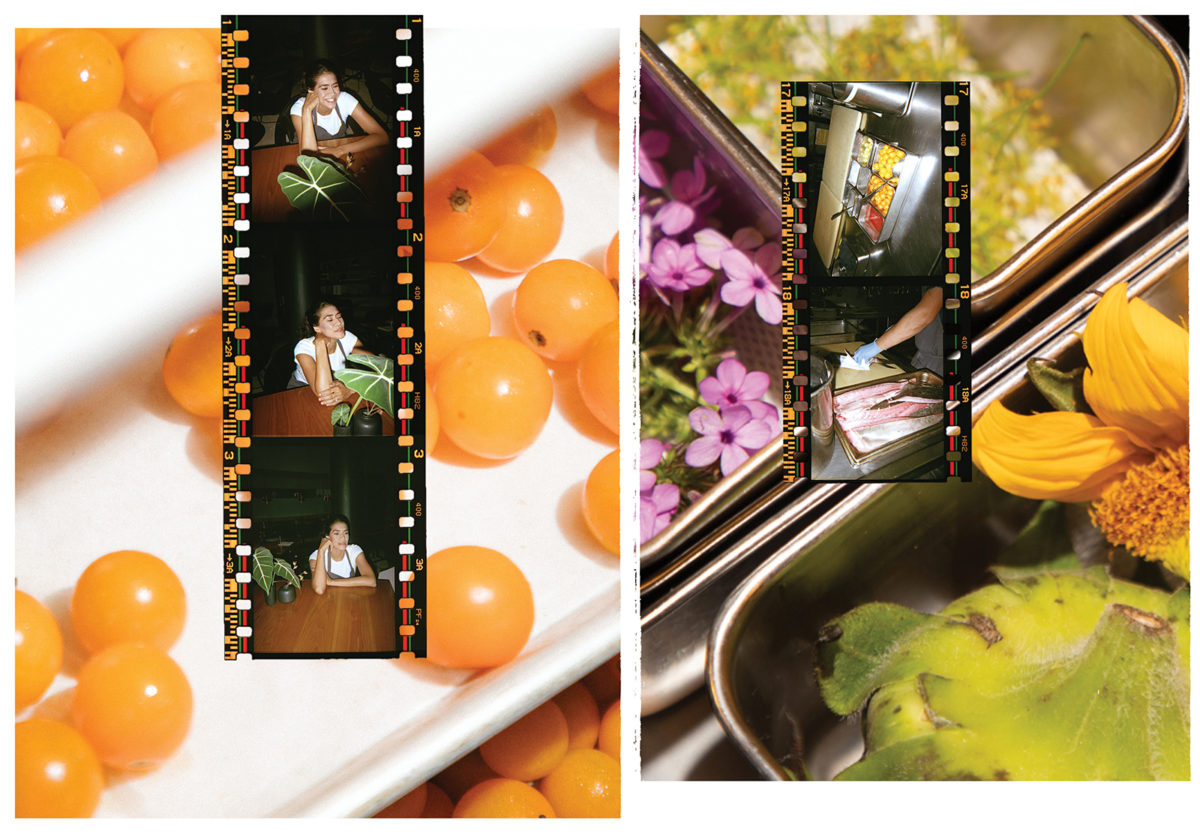 The produce in the kitchen looks almost decorative. The actual decor at Cosme consists of David Alfaro Siqueiros paintings and drawings.

Happy kitchens are rare, especially in New York City, where restaurateurs have always been under immense pressure. Kitchens have a reputation for being competitive, hypermasculine, and hierarchical—something that the #MeToo era has helped to highlight, outing abusive leaders in practically every industry. Patterns of sexual harassment and substance abuse in the food service sector have been reported on in-depth over the last several years. Which makes it all the more satisfying to see Soto-Innes maintaining a healthy work environment for her staff.

“It’s important to make sure that everyone is set and happy around you,” Soto-Innes says over the phone from Oaxaca, adding, “Well, it’s impossible to make everyone happy, but we try to. I think the easiest part of being a chef is actually the cooking part, which no one tells you. [It’s harder to] make sure your team is happy.” 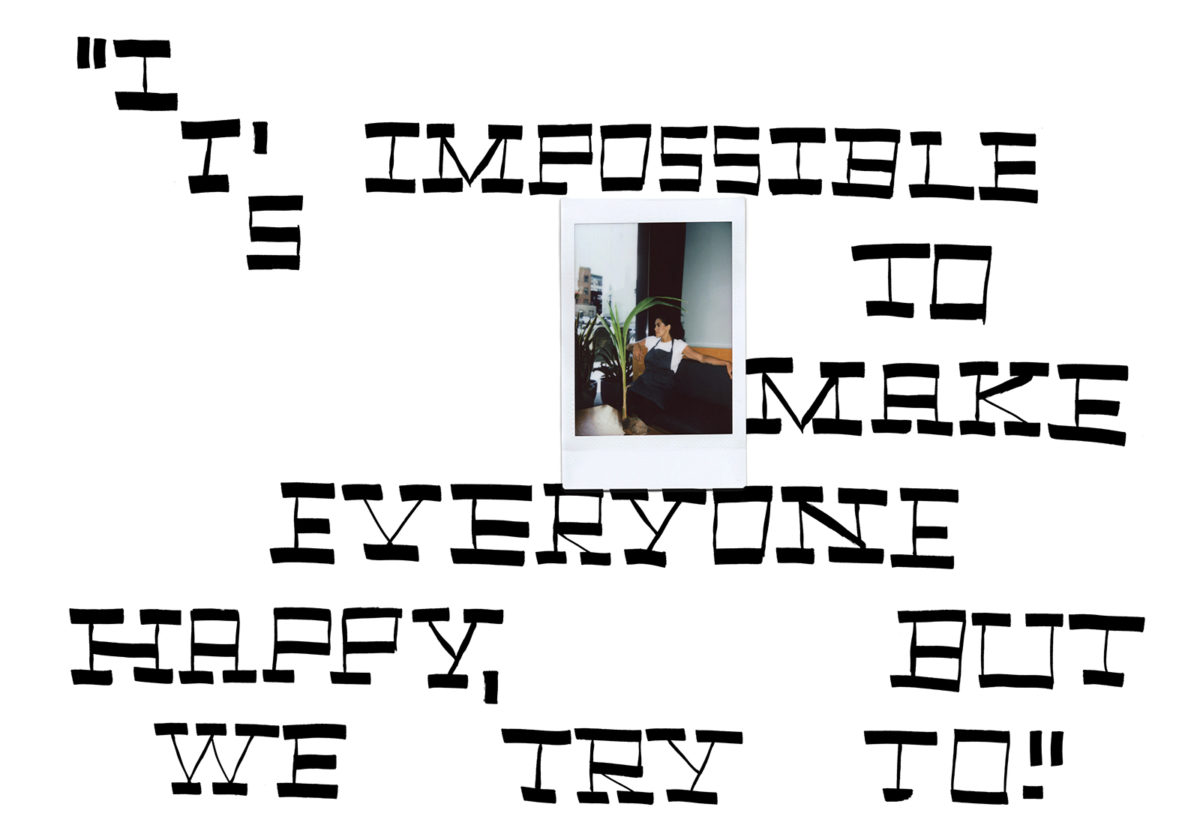 In an industry where so many are jaded, Soto-Innes is astonishingly principled. Members of her staff are never treated as disposable sources of labor. She extends the same hospitality, attention to detail, and compassion expected for guests at the front of the house to staff members at the back—which is particularly impactful in NYC, where an estimated 68 percent of food preparation workers and cooks are immigrants as of 2015, according to a 2017 report from the New York State Comptroller.

For many in this city, restaurants are a first introduction to the U.S.; and for those fortunate enough to work under Soto-Innes, it’s truly a warm welcome. She has each employee complete personality tests so she can manage everyone according to their individual needs; she curates upbeat playlists that reverberate off the stainless steel of the kitchen countertops; she’s been known to send whole sections of her workforce away (simultaneously) to go visit their grandmothers.

And it’s to her own grandmother that she attributes her dedication to spreading joy through food. She learned to cook as a young girl in her grandmother’s Mexico City kitchen, but immigrated to Texas around age 12. The chef has since moved back and forth, always feeling an attachment to the country of her birth.

“I just love Mexico, I have family here,” she says from Oaxaca. “It’s really nice to come back and to [relearn] the flavors, to be in touch with who you really are. Most of the time when I come to Mexico, it’s just to enjoy and breathe.” Recently she traveled to Mexico with Valentina to work on Olvera’s cookbook, Tu Casa Mi Casa: Mexican Recipes for the Home Cook, released in March 2019. 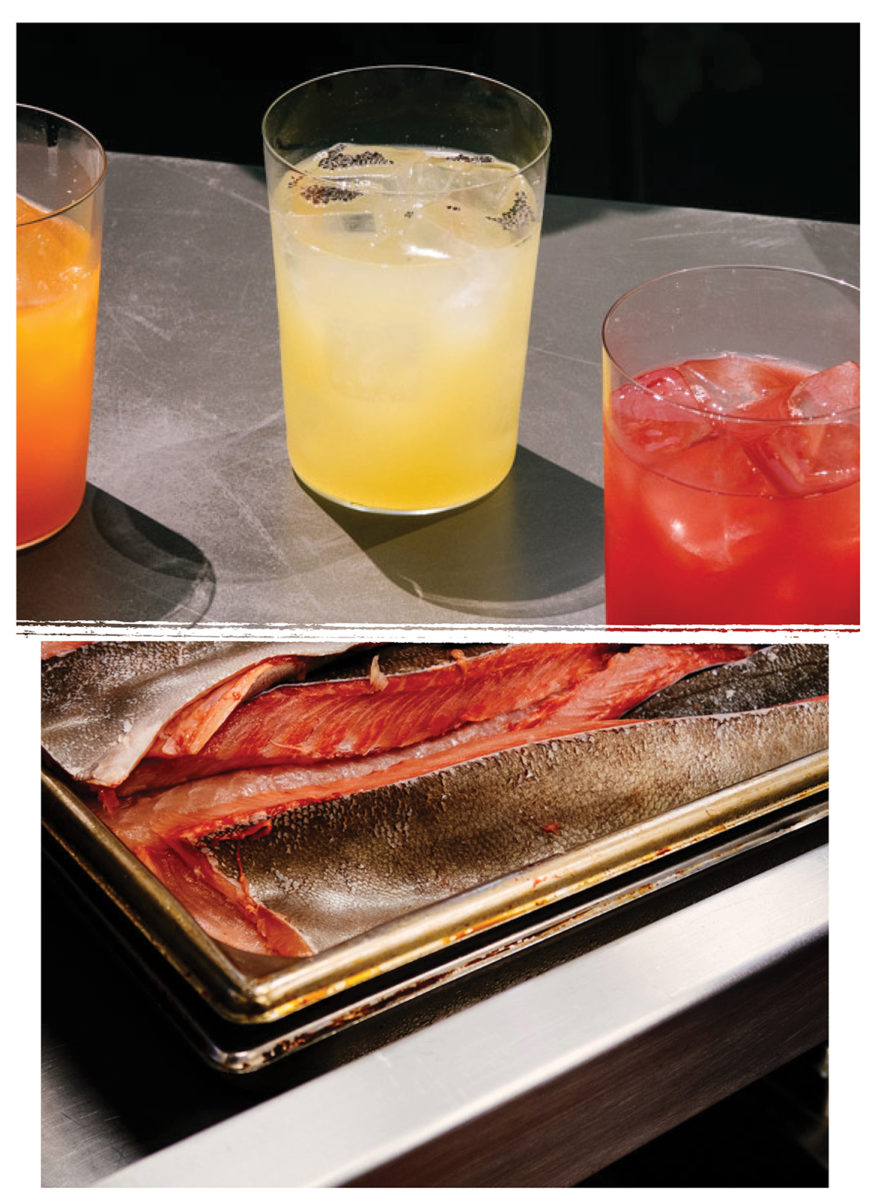 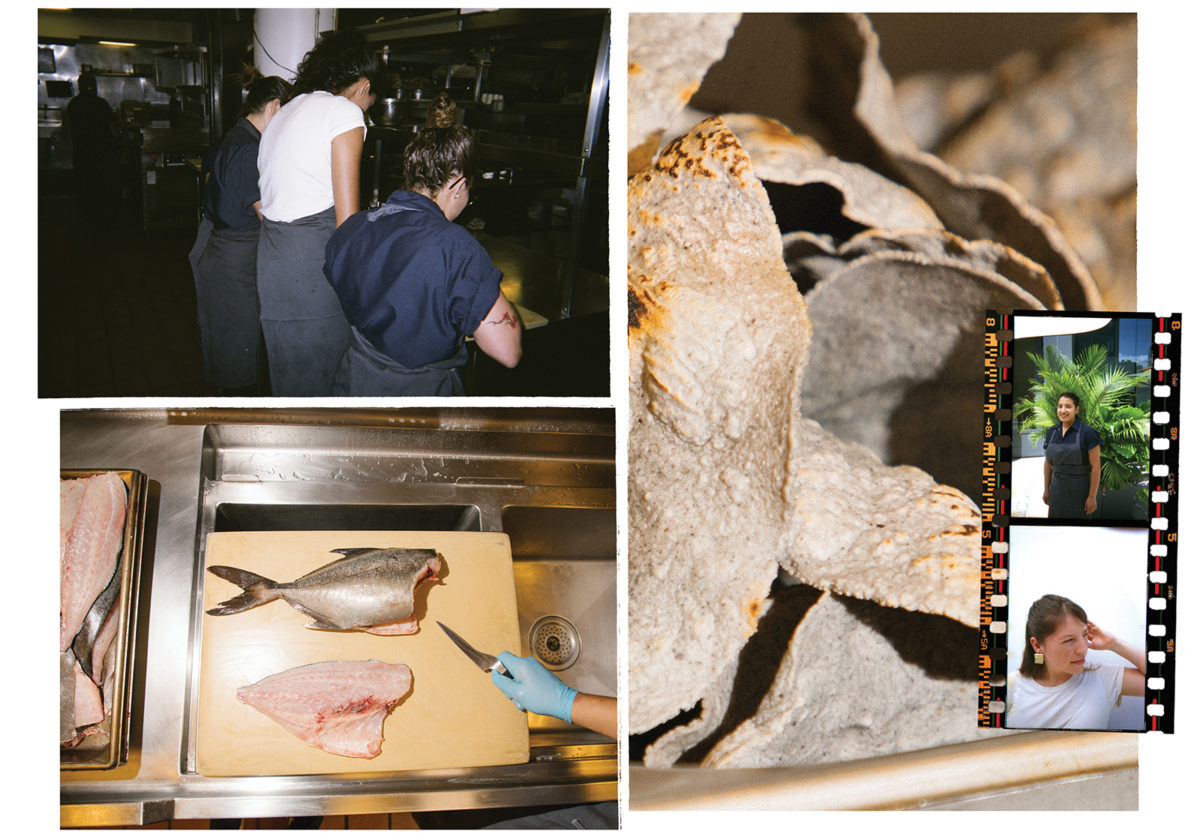 Clockwise from top left: Soto-Innes and her Kitchen Manager, Valentina Brito, prep together; Tortillas are made fresh at Cosme, where Zita, the 42-year-old chef from Mexico, taught the team how to properly grind corn; The young chef working the fish station has never worked in another kitchen before.

On this trip, again, Soto-Innes is mixing business and pleasure. Next, she’ll be heading to Copenhagen with her fiancé, chef Blaine Wetzel, for a seed exchange, and she’s collecting some seeds for the event. She’s also taking this opportunity to meet with some of the purveyors of the seeds and corns that they use at Cosme and Atla, another Olvera property helmed by Soto-Innes in NoHo.

But with all the talk of bringing joy to others, I’m curious about what brings her joy. She’s overwhelmed by the question and at first lists off the obvious: food, friends, and travel. But then she remembers a family that she just visited about four hours outside of Oaxaca. She says their diet was severely limited, consisting of only potatoes, corn, and herbs.

“They shared with us their herbs and their potatoes, and when we said, ‘Mmm, oh my god, this is so delicious,’ they hugged each other, they were so happy,” she says. “It sounds really weird, but to see people excited and discovering new things—that first time that you see someone eating something and they like it—that is what brings me joy.” 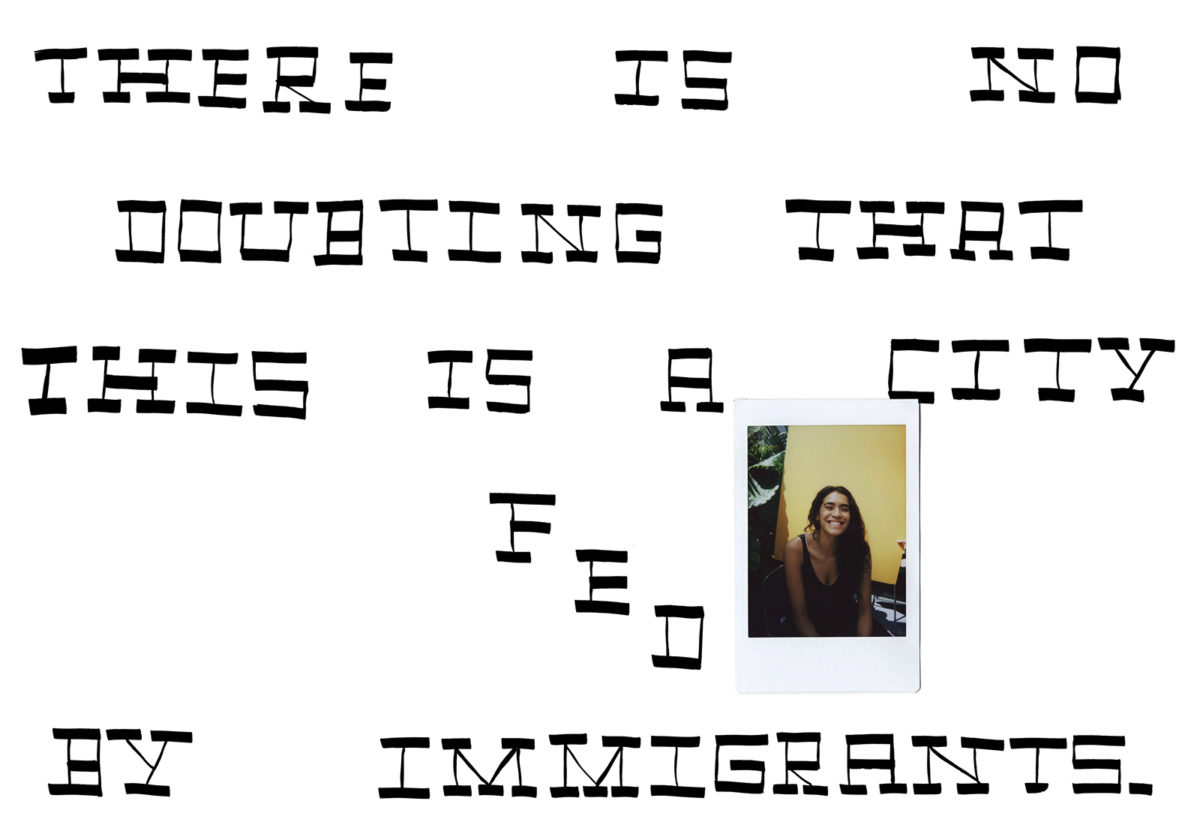 At Cosme, the buoyancy remains even in her absence. Coss and the Brito twins—who I learn are actually two out of four quadruplets—continue to spout adoring compliments for their best friend and boss. And though they all have different work histories, they agree that cooking in Dani’s kitchen is a unique experience.

“She says for [each] cook when they arrive, ‘I don’t want to change your personality. I don’t want you to stop being you. I just want to make you sharper,’” Coss says. “She always talks about movements and how you have to move smarter. So if you’re gonna grab something, kneel all the way down. It’s like a dance. So even though I’ve been working in this industry for, I don’t know, eight, nine years, starting work at Cosme was like resetting everything.”

On the walk from the dining room to the kitchen, I feel like I’m approaching a house party instead of a work space. Undulating techno music gets gradually louder as we wind down the stairs, inviting us into the energy of a kitchen in prep mode. “¡Bien, hola!” Coss calls out to the team. “¡Hola!” they all respond.

Attempting to not disrupt anyone’s flow, we make our way between stations. There are junior chefs like Stephanie, who’s never worked in another kitchen, and masters like Zita, the 42-year-old sage from Mexico, who’s been at Cosme since its opening and who taught everyone how to properly grind corn. The best mole maker in the room happens to be Philipp, a 31-year-old Russian immigrant who’s been working with Soto-Innes for several years. Stephanie asked to work on fish today, though she normally works the hot line. When I approach her, she’s putting the finishing touches on her clean fillet. Everyone is encouraged to try new things—even the experts.

“I’ve learned so many things that I didn’t know how to do, and I’m still learning every day,” Zita says. 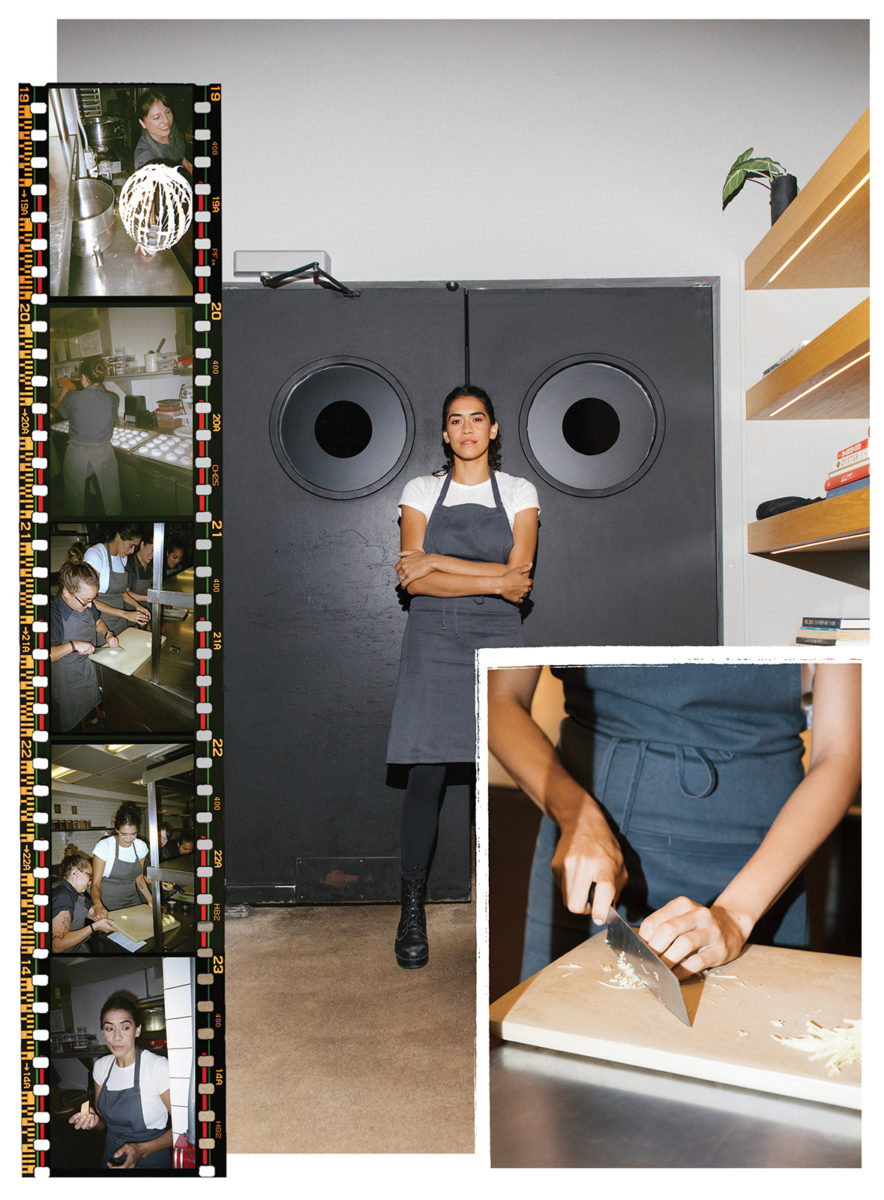 When Soto-Innes builds a team, diversity is considered holistically. “Diversity isn't just about ethnicity. It’s also gender, age, personalities. You can have a 50-year-old working with a 19-year-old and that’s amazing. It doesn’t happen that much.”

I let everyone get back to work and make my way to the exit, feeling lifted by what have to be the smiliest people in any basement in NYC’s history.

Walking back to the train, I pass the consulate again, where there’s still a line out front. This time I see a woman stationed at a cart a few feet away selling fresh mango and Tajín, and a man loading crates of tomatoes into an underground kitchen like the one I just left. There is no doubting that this is a city fed by immigrants. And at the same time as many of them are brutalized at the border, it’s immigrants who continue to introduce us to our new favorite dishes and flavors, as wide-ranging as ramen, bubble tea, pierogies, and elote.

Soto-Innes is keenly aware of this relationship and of the humanity of those who step into her kitchen. Where others take advantage of vulnerability, she celebrates its strength; where others contribute to marginalization, she advocates for dignity. 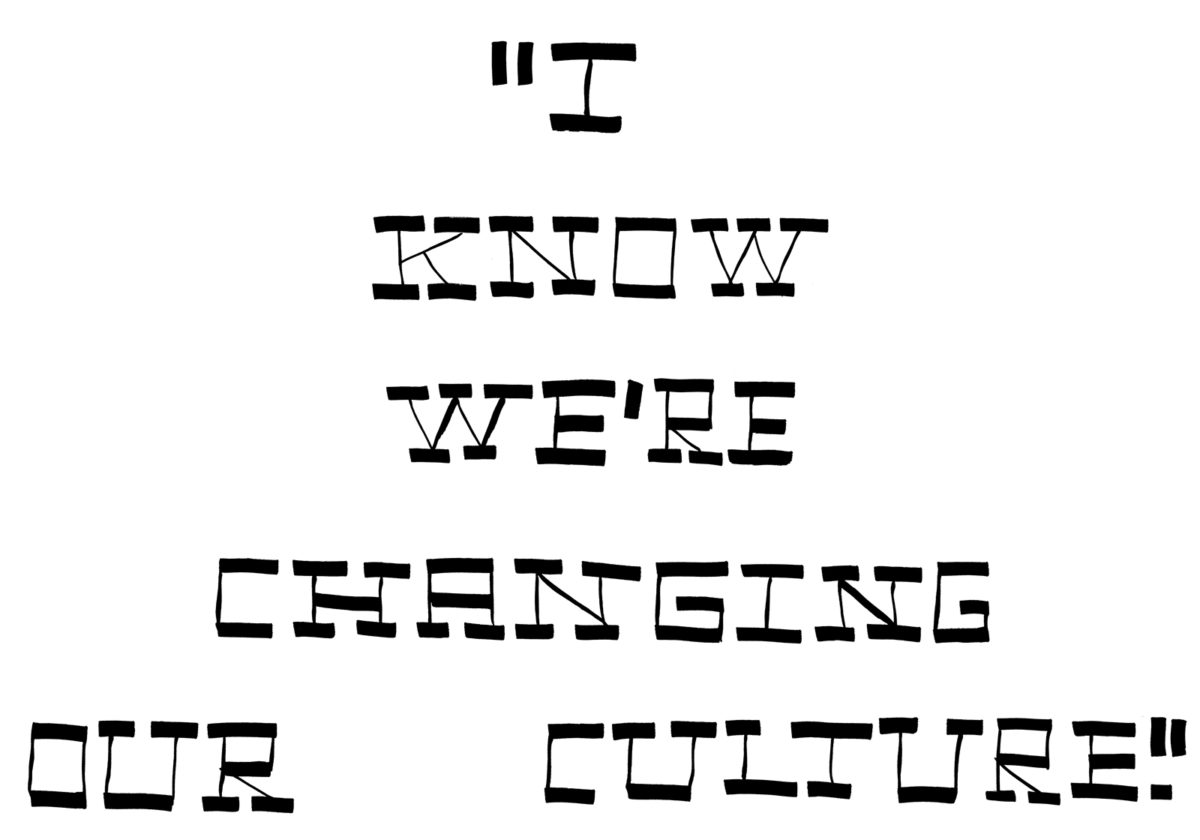 And it’s being noticed. A few weeks before I visit Cosme, Soto-Innes is short-listed for “Inspiración Favorita” at the Kids’ Choice Awards México. The news reminds Coss of when they first met, and how Soto-Innes used to say that together they were going to change the world.

“Someone’s watching, and that audience is bigger than cooks,” says Coss. “I don’t know about changing the world, but I know we’re changing our culture.”

For Soto-Innes, it was never just about the food anyway. “I understand that I am not the best chef in the world,” she says. “But I want to use my voice to help other people feel encouraged to be different.”