Learning the Art of Traditional Ceviche in Peru

Having grown up in California roughly 20 minutes from the border with Mexico, I often think I’m hot shit when it comes to Latin food. Mole? Obviously. Chimichurri? Yeah, I know her. Elote? Please.

That’s why it was a real shock to the system when I was schooled on one of my all-time favorites—a seafood dish, no less—by the staff at the Arennas hotel in Máncora, Peru’s premier northern beach town.

In all fairness, these people are ceviche purists. In their eyes, the tomatoey concoction prepared with all manner of shellfish and avocado (a much more Mexican iteration and generally what many of us think of when we think of ceviche in the States), is an unacceptable imposter. Here, the only way to eat ceviche is the old way—chunks of raw fish (corvina, hamachi, or sole will do), thin slices of raw red onion, lots of salt, and flecks of aji pepper, all mixed up in a bath of fresh lime juice—with few adjustments, if any. Some Máncorian chefs add meaty kernels of choclo, a kind of white Andean corn. The most daring among them will add leche de tigre, an even more potent citrus marinade that is actually not, to my continued surprise, a traditional ingredient. But that’s it. No more, no less.

“You have to have the ‘touch’ to slice everything just right. And if you refrigerate, it’s not a ceviche,” declares Jury Ramirez, executive chef at Arennas. (The man can cube a filet of corvina in seconds, but he does not mince words.)

Those are the rules—and in northern Peru, you don’t dare to break them. This is, after all, where ceviche was actually invented.

Find out why the Arennas hotel in Máncora is worth traveling for. 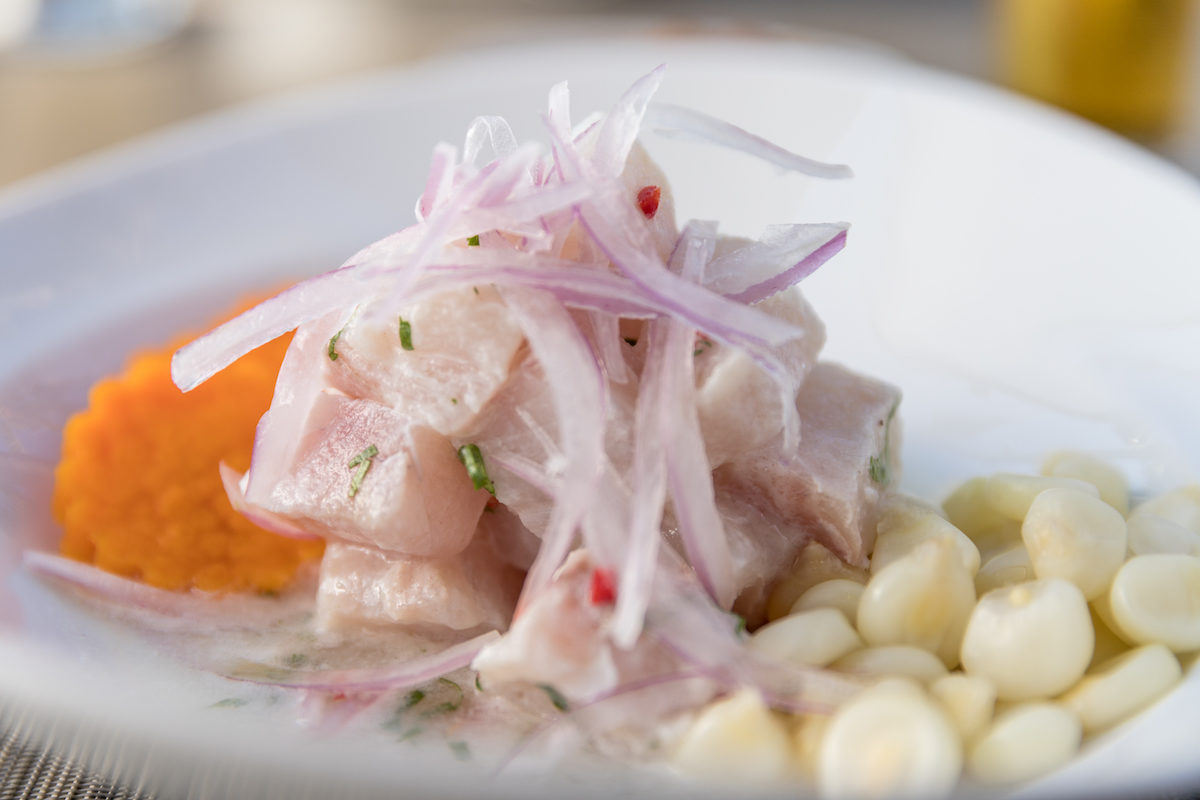 Up close and personal ceviche.

“Peruvians have eaten ceviche for 2,000 years,” says Ramirez. “It’s the Peruvian touch.” The precise origin is somewhat contested—some say it’s a dish as old as the Incas, others say it began during the colonial period. Peru, however, is the official agreed upon origin.

As ceviche has grown in popularity in Peru and abroad, it’s certainly been adopted (and, depending upon who you ask, bastardized) by other cultures. It can even look different across different regions of Peru. But the Arennas staff agrees: Ceviche is best in the north, not only because this is its birthplace, but also because this is where it’s at its absolute freshest.

“If it’s fresh, it’s good,” says Ramirez, who believes a good ceviche is all about balance. “The [lime] ‘cooks’ the fish and cuts all the salt—and you want to use a lot of salt.”

At the Arennas Máncora property, the chefs put me through northern Peruvian ceviche bootcamp, attempting to teach me how to make the traditional variation of this dish for myself. To no one’s surprise, they were tough critics—apparently my knife skills could use some work and I shouldn’t shy away from the salt. Overall, though, they weren’t repulsed by my creation—one thing I’m taking as a win.

When I asked Ramirez what, aside from the obvious history, continues to make Peruvian ceviche so special, the chef simply turned his gaze to the ocean, about 20 feet away from our outdoor kitchen space at the hotel’s outdoor bar, where waves lapped the sand lightly.

“All of this,” he says, pointing a lime-soaked finger, a proud smile curling his full lips.

And while Máncora’s ceviche is nothing short of delectable, I have to admit that I’ll always love my blasphemous Mexican style most. At the end of the day, it’s what I was raised on, which seems a good enough reason to love a particular ceviche—a dish that Ramirez confirmed is nothing without its historic roots and personal connection.