Under most circumstances, an out-of-body experience resulting from the consumption of shellfish warrants a trip to the emergency room.

In the case of my single kumamoto oyster (course one of 10) from Addison, however, I knew that my hallucinogenic response was not a matter of food poisoning. It was a matter of euphoria.

The first time I ever ate a raw oyster, I was, pardon the seafood pun, positively hooked. It used to be that I would order the slimy, salty creatures every time they appeared on a menu—maybe not the smartest investment for a college student on a budget, but I like to think a good bivalve is worth shelling out a week’s salary for. I was popping oysters like candy, and eventually knew what to expect each time: the familiar chill, that vinegary tang, a little lemon here and there, perhaps a final note of heat on the back of the tongue courtesy of a delicate drizzling of tabasco. Unfussy and uncomplicated. But it only took one unconscionably fancy meal at Addison to turn my pedestrian oyster consumption on its head. The morsel they served me was unlike any other, topped with uni and blanc de blancs foam, resting atop a bed of coarse sea salt (not for eating!). Swallowing the oyster felt like drinking a liquified pearl. The silken texture was interrupted by a subtle frothiness, not unlike an ocean wave. It was the most poetic mollusc I had ever known.

I am unsure of how I wound up wine-drunk and hiccoughing inappropriate details about my love life to my dad at the only AAA Five Diamond restaurant in San Diego, but I do know that I was there, at least initially, to celebrate his birthday. Being the proud middle-class Americans that we are, we have a history of celebrating family birthdays at restaurants where the staff engages us in some form of public embarrassment. My favorite memory is from the Montana Grill, in Ontario, where waiters dressed as vikings gathered around my grandma to crown her with a fake moose head and sing a chorus of “Happy Birthday.” At Addison, images from that night flooded my brain as a flurry of immaculate servers—each with the grace of a ballerina—surrounded our table. They filled our water glasses in unison and daintily plucked my purse from the floor to place it atop an ornate velvet footstool—a small throne just for my oversized tote filled with stray tampons and used tissues. There would be no moose heads tonight.

Located inside the Fairmont Grand Del Mar in my native San Diego’s north county—a part of town known for its Pacific Ocean vistas and endless supply of leisure activities, like horse racing and golf—this restaurant plays no games. When I say Addison is fancy, I’m saying that the Queen of England could dine here and feel underdressed. “Attention to detail” hardly scratches the surface; when a single drop of South African grenache escaped my glass, thereby threatening the pristine white tablecloth, it was only a matter of seconds before one of our emergency response servers reappeared to cover the stain with a new swatch of white fabric. Everything about the scene was set perfectly, too, including the floor-to-ceiling, red-velvet-draped windows that opened to verandas and a small, babbling creek below. Recognized as a “Grand Chef”—one of just 160 in the world—by Relais & Châteaux, executive chef William Bradley runs a tight ship alongside chef de cuisine and rising culinary star Stefani De Palma. Luckily for my dad and me, their seasonal 10-course tasting menu is certainly in keeping with their accolades. 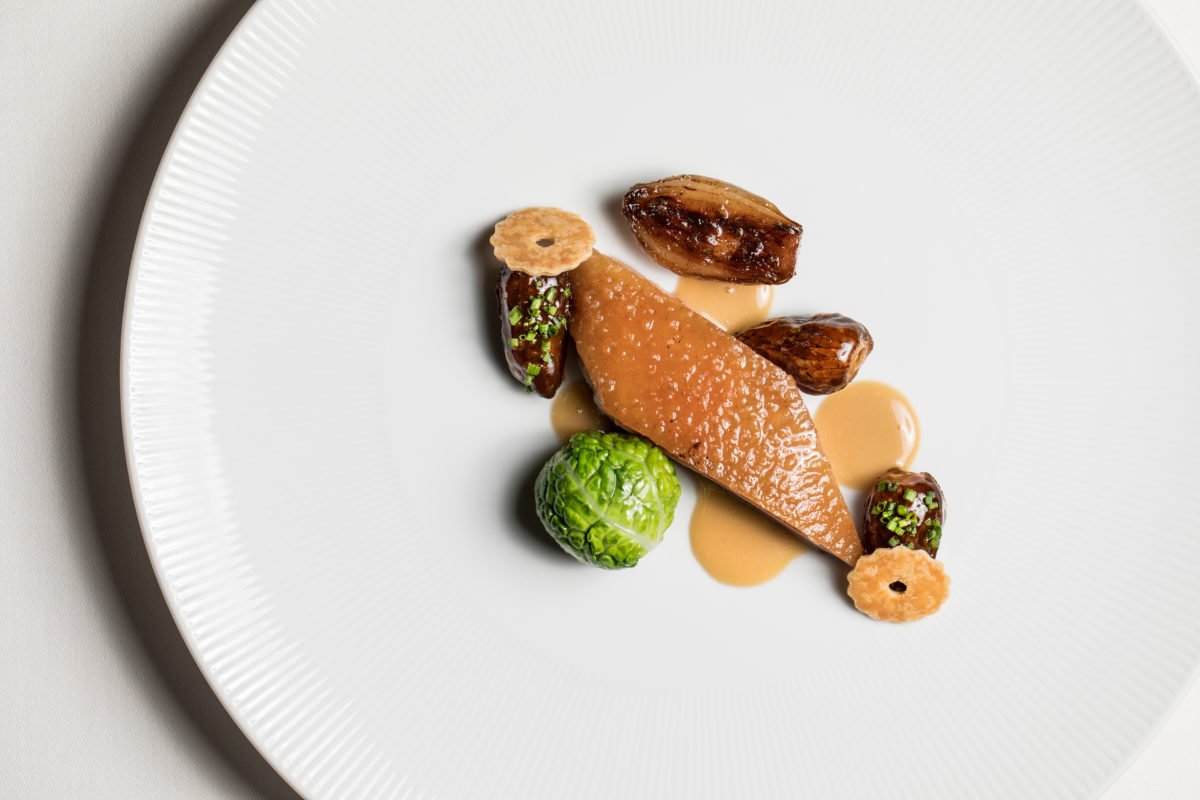 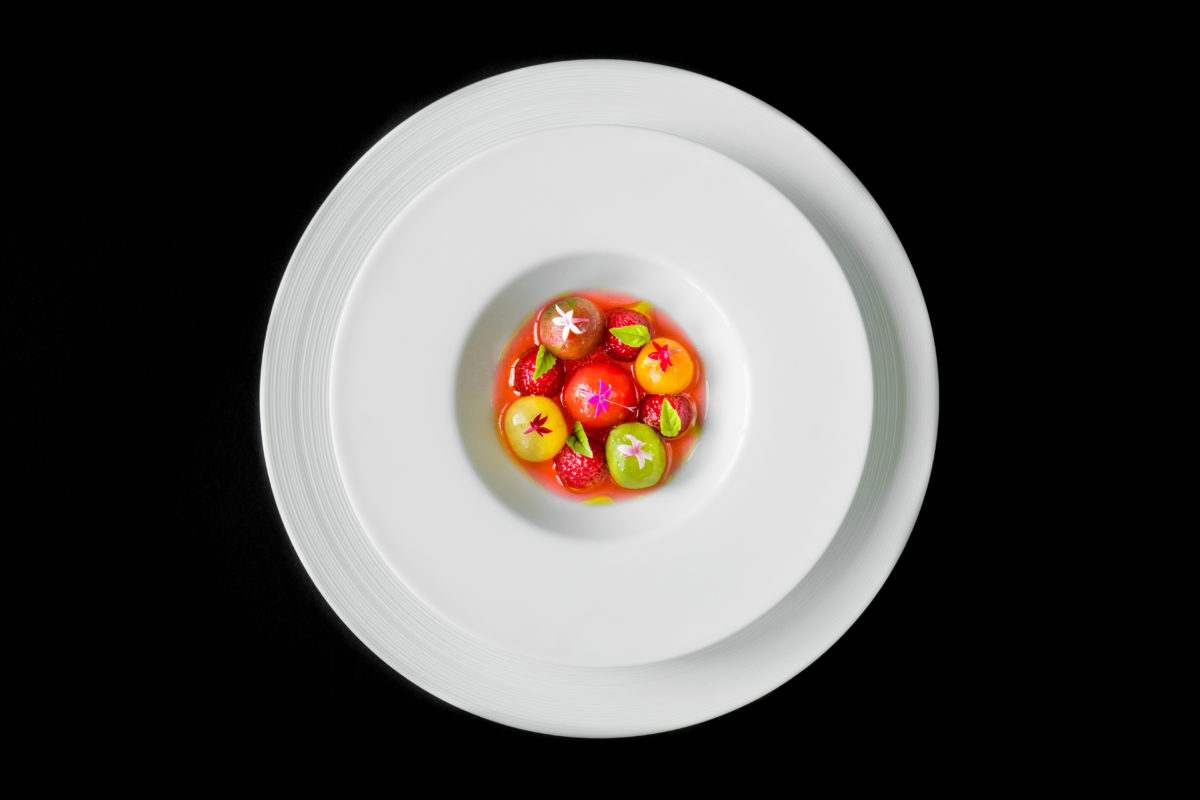 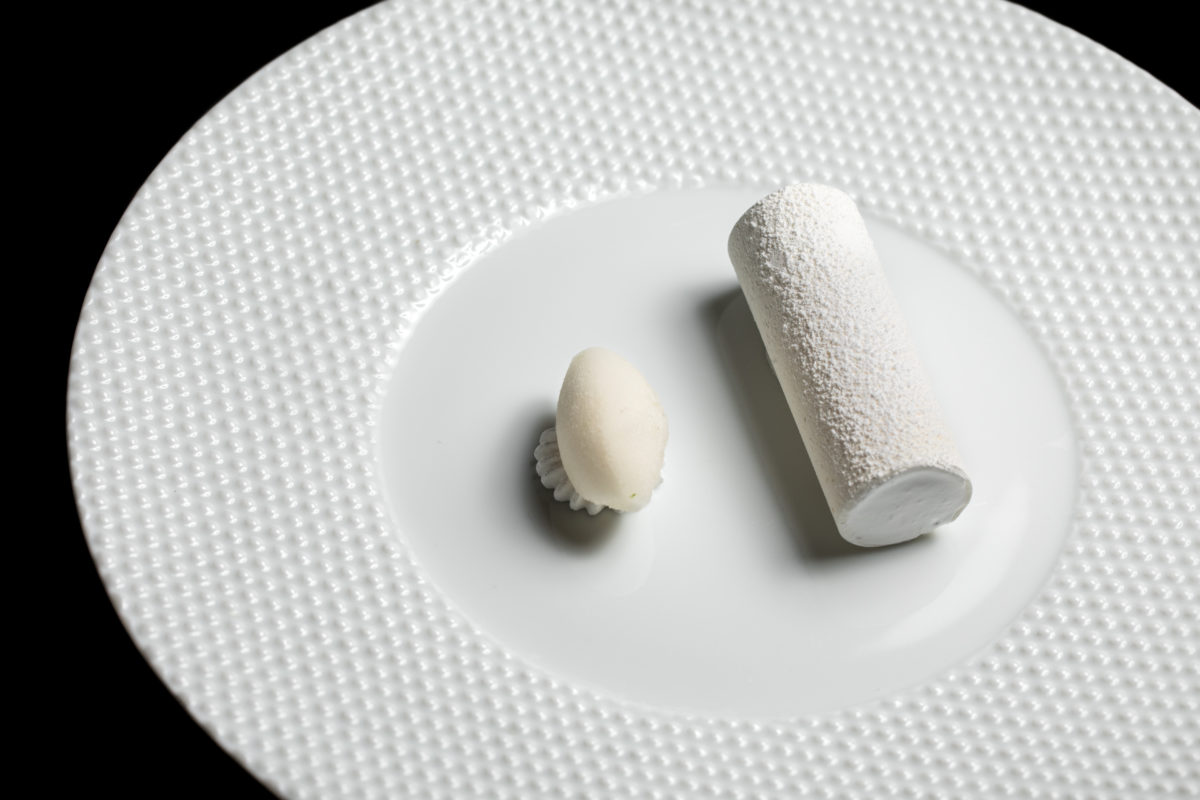 Wine pairings with every dish turned most of my notes into illegible scribble by the end of the night, but the food was more than memorable without the aid of my notebook. The amuse-bouche alone was enough of a selling point: that raspberry and olive oil emulsion was a surprise underdog course of the night. Indeed, the dishes from the beginning of the service were my favorites, perhaps because, by course eight or nine, I thought I was going to burst out of my Uniqlo jumpsuit.

Other standouts included the most delicate prawn I had ever had the pleasure of digesting, served with an actual dusting of gold, and of course that life-changing oyster. The meat courses nearing the end of the night were delicious in their own right, but by the time we finished them, I was one bite of canard roti away from tossing my cookies—or, rather, my roche de chocolat with maraschino cherry and brown butter caramel, which was served for dessert. The meal was paced as luxuriously as it was presented, giving me ample time to catch my dad up on the gory details of my life and relationships in New York, through sporadic diaphragmatic spasms—truly any father’s birthday wish! 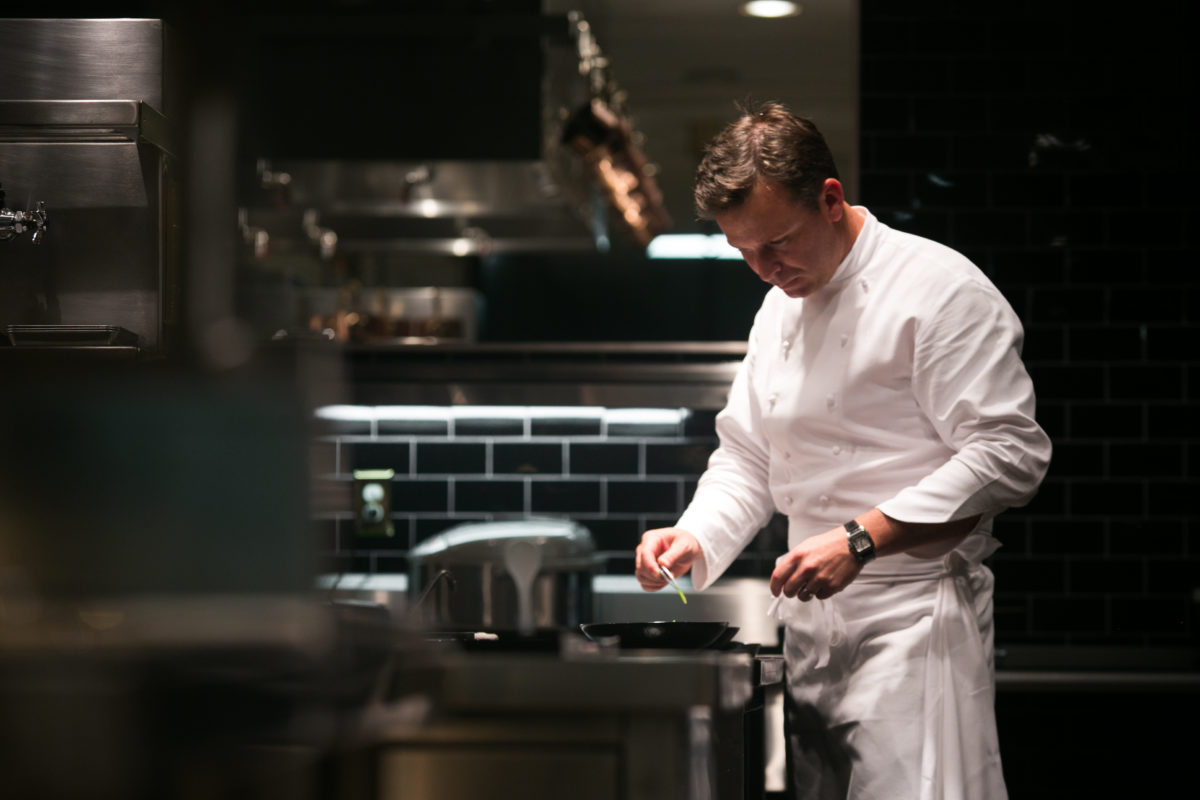 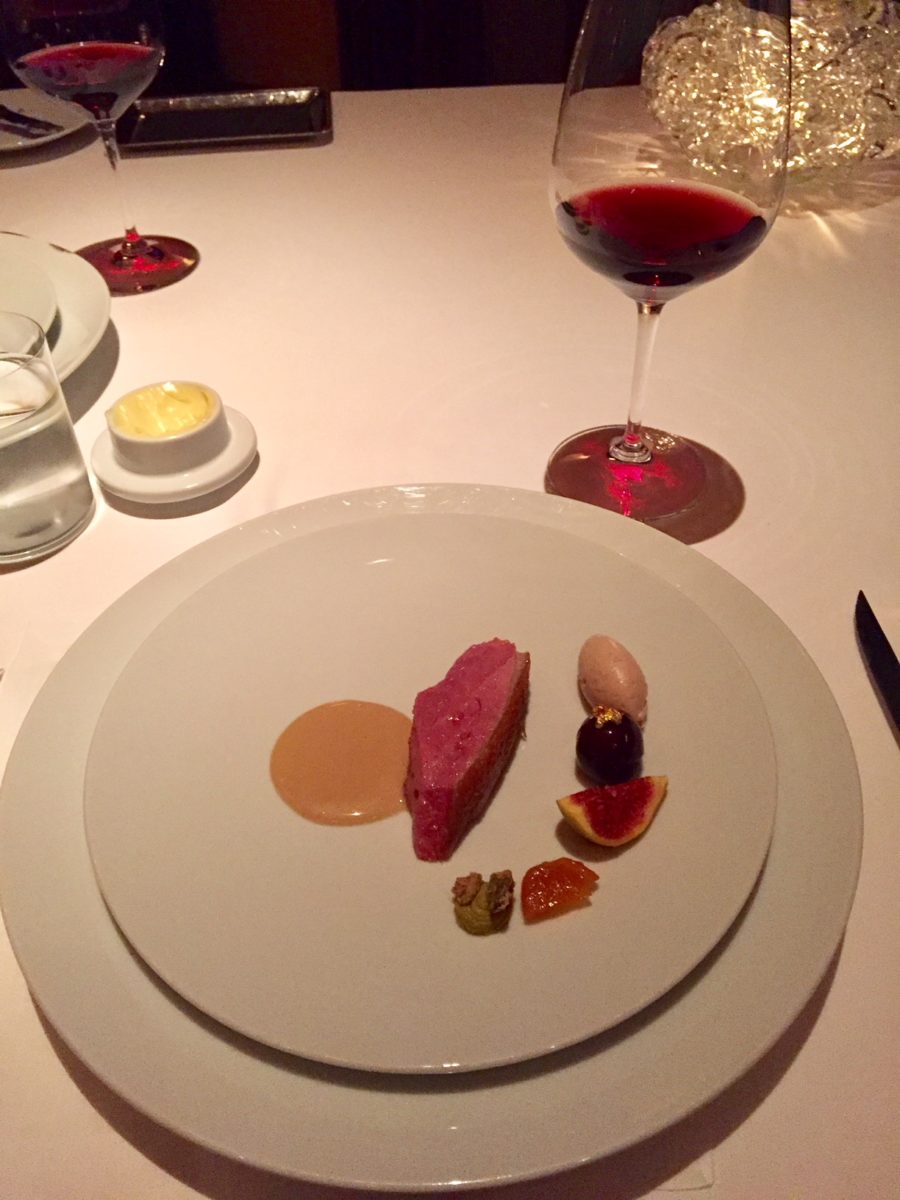 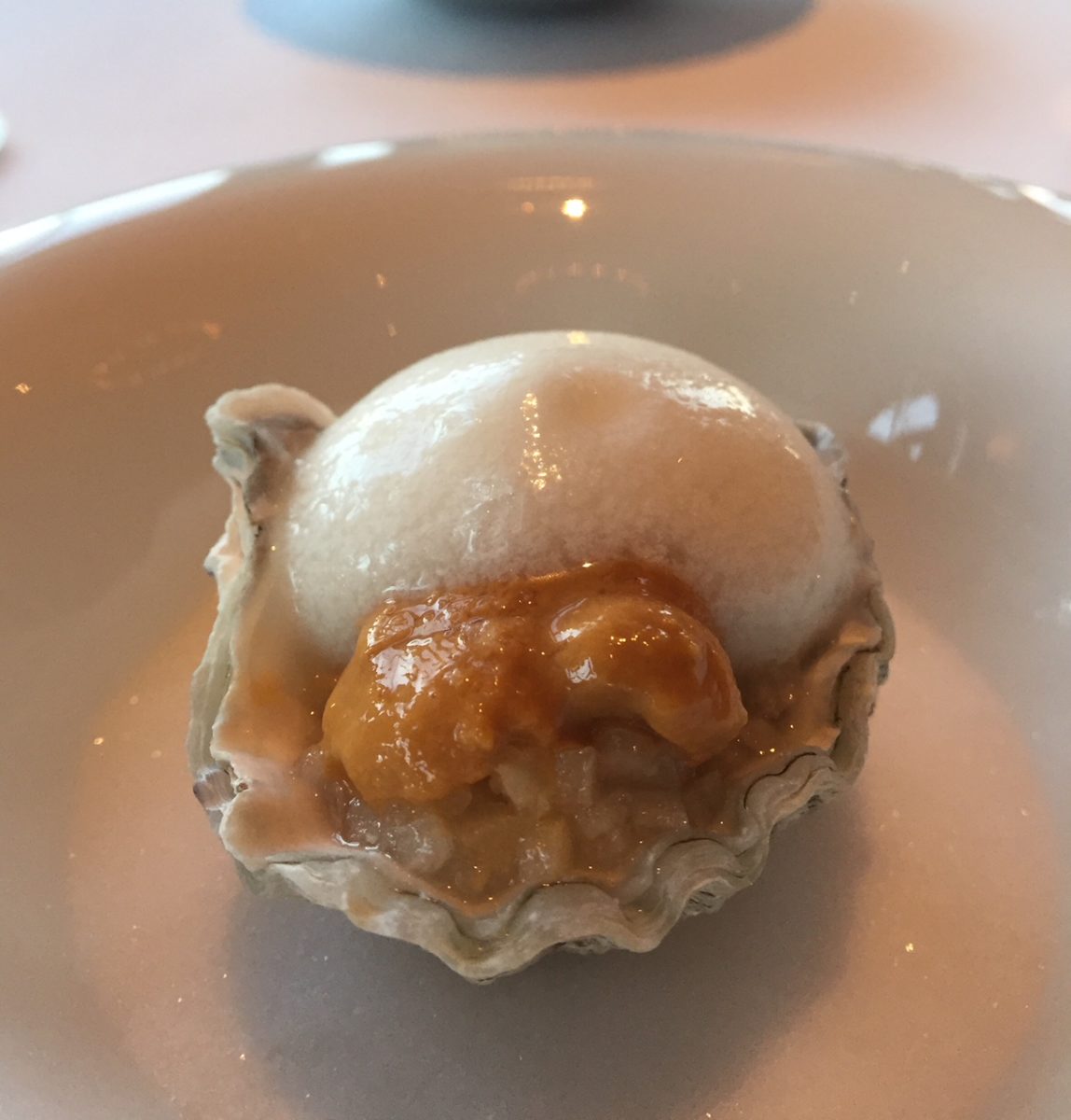 The highlight of the night, this kumamoto oyster had the elegance of a liquified pearl. Photo by Bruce Glassman.

Ten courses later, our night ended sleepy-eyed and satisfied as we waited for our ride out on the heated patio. Somehow, the valet mistook us for the kind of duo to have arrived in a chauffeured limousine or an Aston Martin or something equally flashy. After eyeing us for several minutes, he finally asked if we would like him to call the driver and inquire about the status of our vehicle. My dad and I let out a sharp laugh as my older brother pulled up in our robin’s-egg blue Toyota Prius C, here to collect his now slap-happy family. If I were sober at the time, perhaps I would have been slightly embarrassed, but instead my energy was focused on keeping the contents of my stomach firmly in place—though I would have very much liked to have seen that oyster one more time.