How to Spend a Long Weekend in Rome, Italy

More than 2800 years of history, architecture, and art; 900 churches; nearly 100 art museums; tens of archaeological sites—Rome has a never-ending count of things to do and see, which is what keeps the Eternal City—well, eternal. 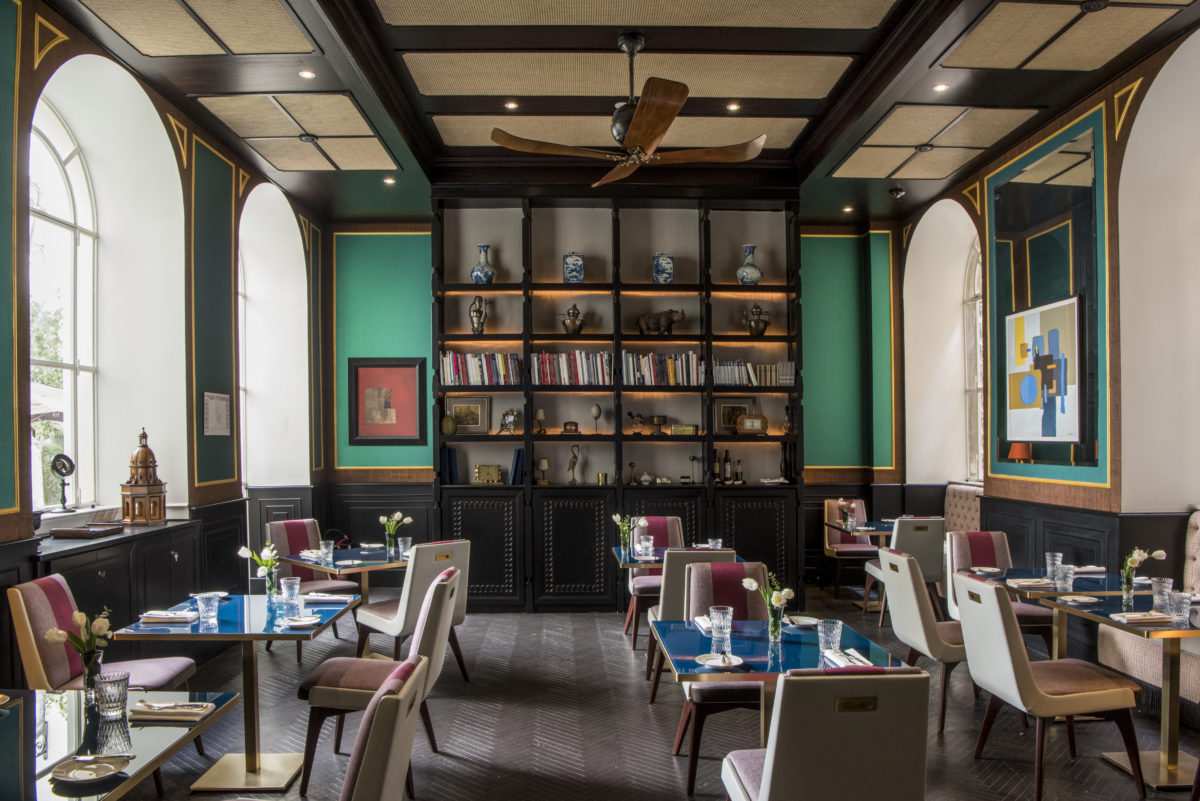 Stop in for a meal at the Adelaide Restaurant at Hotel Vilòn. 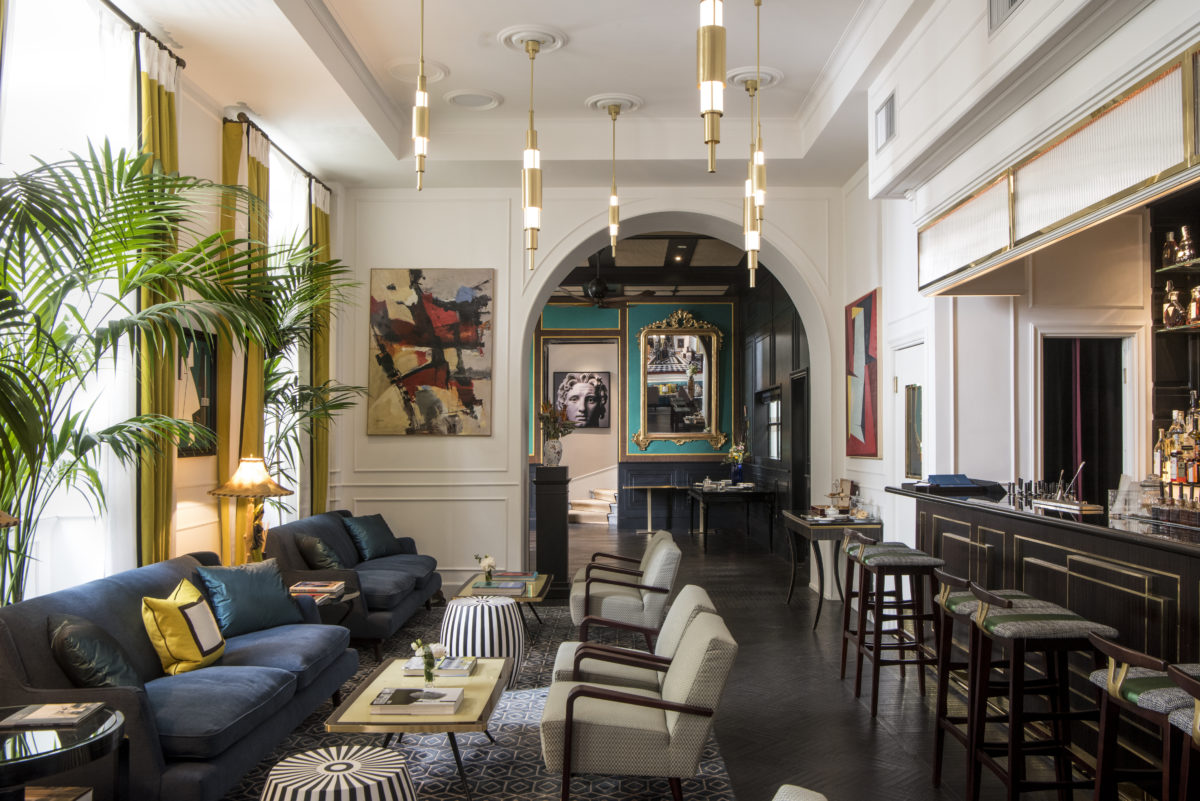 The bright and airy living room at Hotel Vilòn. 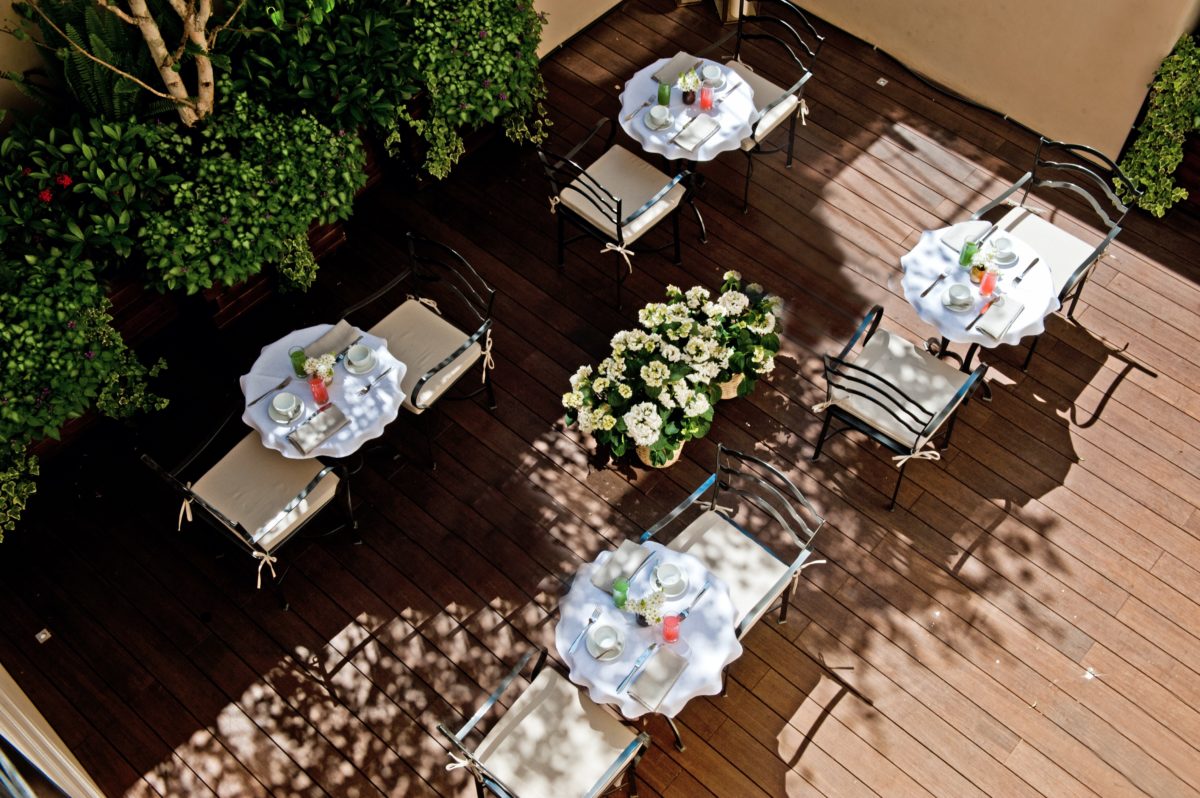 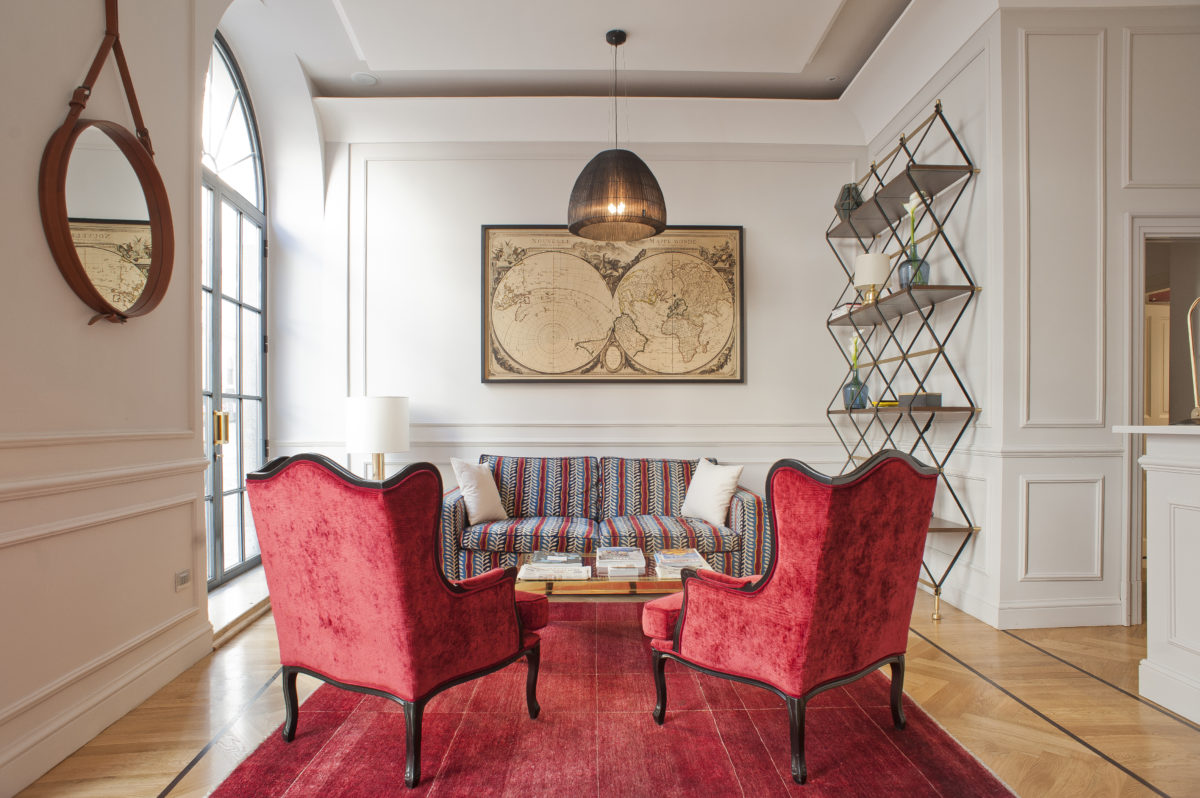 From the rooms to the hallways, every corner of the Fifteen Keys is thoughtfully designed.

Take a walk down Via dell’Arancio. If you’re not careful, you might miss the door that will lead you into a private townhouse just waiting for an affair. Sultry and stylish, the 18-room Hotel Vilòn seems like it was designed for a tryst. The design is all about decadence, from its harlequin-tiled, marble-floored entrance and rich hues to the midcentury modern furniture and larger-than-life prints by photographer Massimo Listri in the lounge. But you don’t want to hang out too long downstairs; instead, you’ll want to spend most of your time gazing out of your private terrace, which overlooks the Borghese Palace’s gardens.

An urban townhouse with the charm of a fantasy pied-a-terre, light colors, mid-century armchairs, and other vintage pieces create a retro feel in each of the 15 rooms of the Fifteen Keys. Located in Monti, a bar- and boutique-lined neighborhood in downtown Rome, the Fifteen Keys’ central location makes it the ideal hub for any adventure you have planned. An added bonus: its ground-level lounge is the perfect starting place for aperitivi.

For a dip into the world of contemporary Roman royalty, a weekend at Villa Laetitia is the only address. The secluded art nouveau villa is a one-of-kind oasis restored by Anna Fendi Venturini of the famed Fendi family, whose innate design sensibility includes contemporary art from her personal collection, Fendi home pieces, and Venturini’s own custom lamp designs. The tiny café is a lovely belle époque timepiece—and it helps that Enoteca la Torre of Michelin star fame is onsite, as well.

Honorable mentions go to the Nerva Boutique Hotel, an affordable boutique with a prime location in the heart of Rome’s Monti neighborhood; the four-room, off-beat and off-the-beaten-path Casa Fabbrini; and Hotel de’ Ricci, an eight-room, impeccably styled townhouse. If you’re looking for something a little further outside the hustle and bustle of the city center, check out the 17th century art-filled, resort-like Rome Cavalieri, near the grounds of the Italian Open, where Serena Williams got engaged.

Find out why Rome Cavalieri alone is an experience worth traveling for. 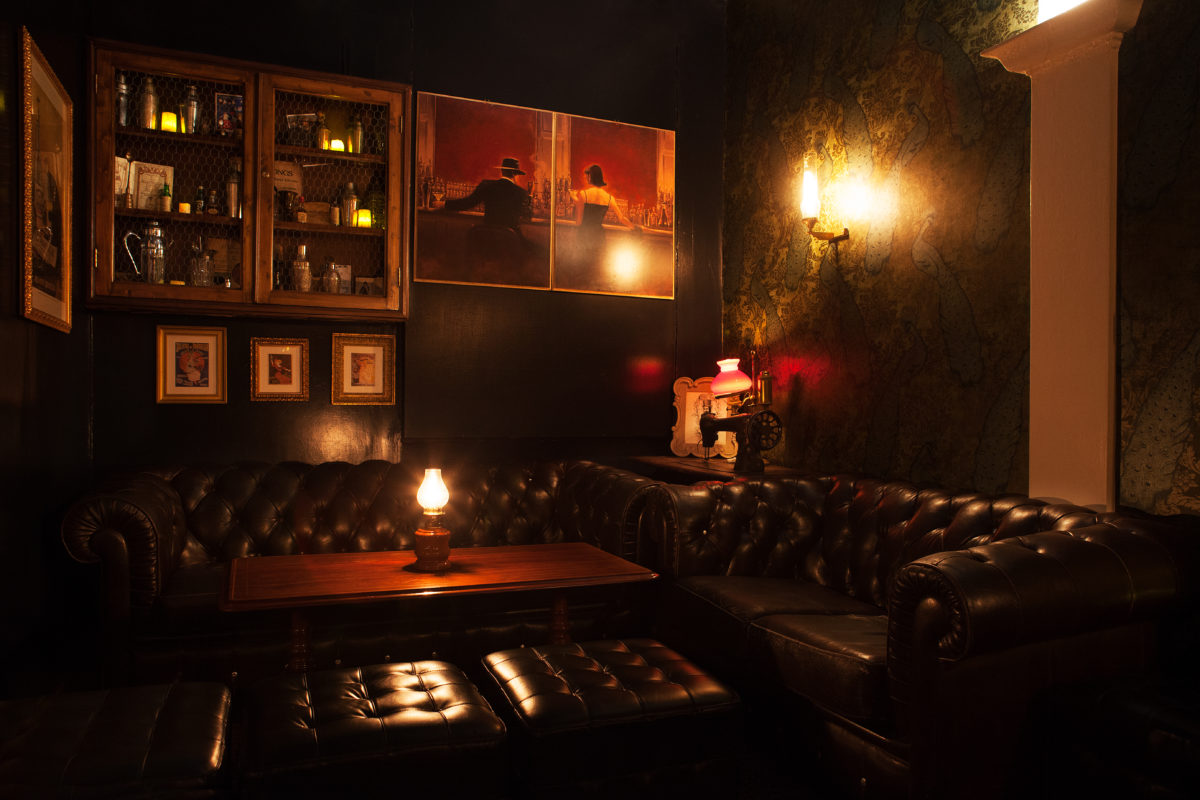 The Jerry Thomas was originally intended as a place for members of the bartending community to meet and share tricks of the trade. 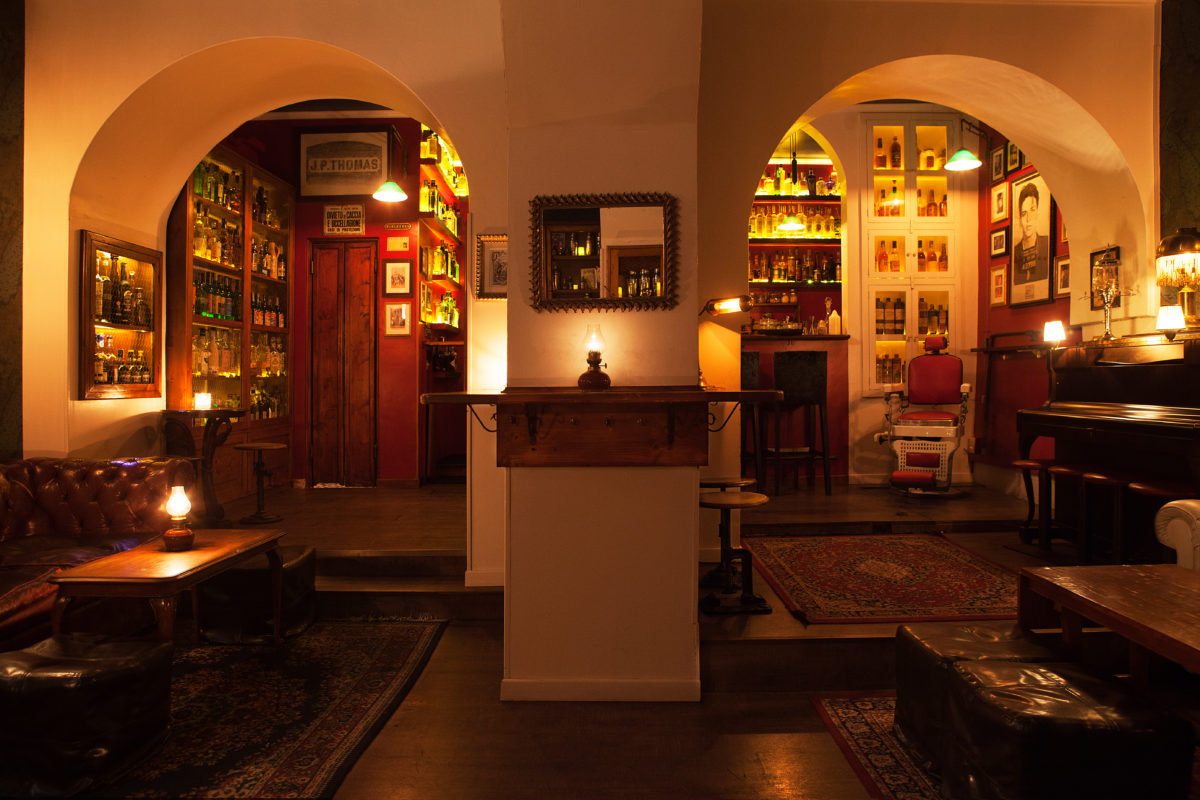 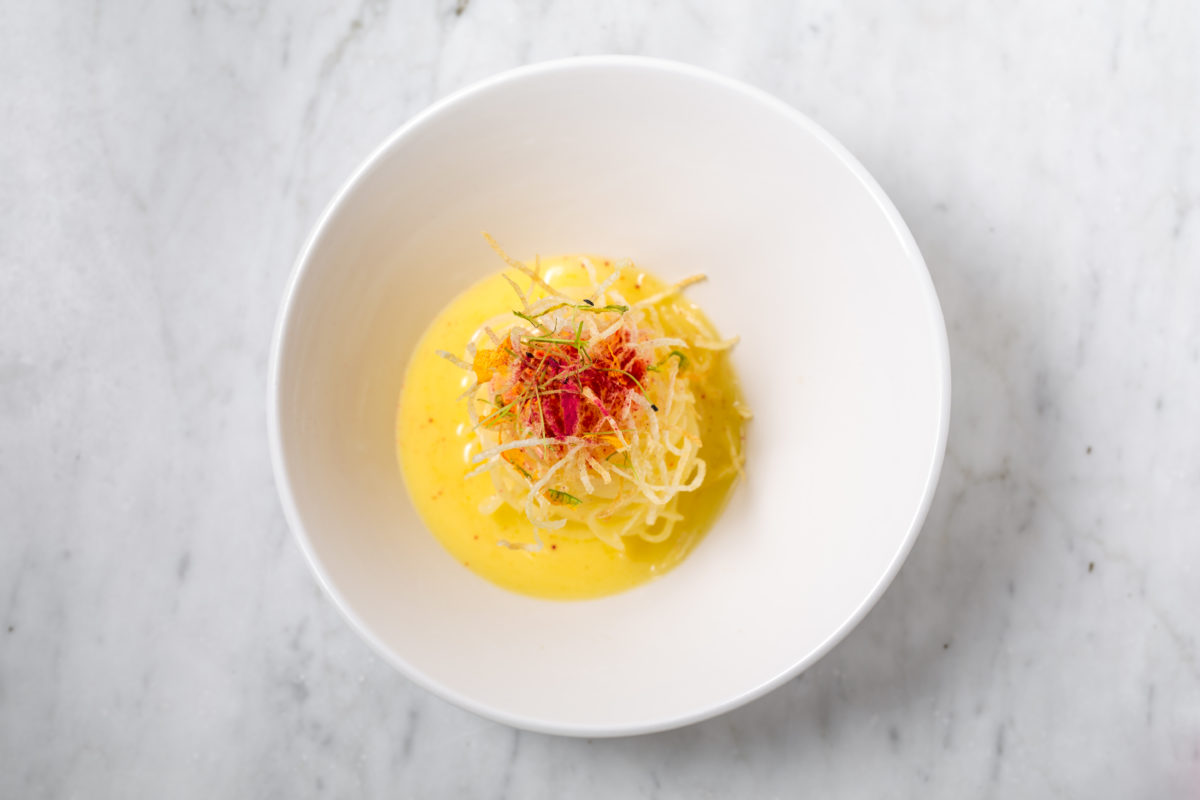 A plate of potato spaghetti from Michelin-starred restaurant Bistro 64.

Testaccio Market is a great place to get to know the Roman food scene as well as the overall Roman vibe. The neighborhood market has over 100 stands, selling everything from produce, meats, and fish to house products, clothing, and crafts. In the early morning, only the nonni vying for fresh fruit create a crowd. But by midday, the market comes alive with local residents and visitors perusing the stands for the perfect bite (you’ll want to come on an empty stomach). Standout vendors include Casa Manco (Box 22), a family-run pizza al taglio (pizza by the weight) whose dough and creative toppings are unforgettable; Mordi e Vai (Box 15), where Sergio and Giuliano make panini stuffed with Roman recipes like lesso al picchiapò and trippa alla Romana; and the fried delicacies at Mastro Papone (Box 96).

L’Arcangelo is the restaurant for when you want to be stylishly low profile. Located in the Prati neighborhood, the restaurant is essentially a stylized salotto—an open living room of leather couches and low tables—where chef and owner Arcangelo Dandini entertains with his unforgettable supplì, carbonara, and gnocchi. If you can get past the traditional Roman favorites, you’ll find that Dandini will surprise you with his off-menu dishes like ravioli di Cipolla e il Mio garum—onion-stuffed ravioli with his version of an ancient Roman fish sauce).

Corsi is an old school osteria (tavern) in the very center of the Centro Storico. Its yesteryear vibe, with its wooden tables, paper tablecloths, and walls lined with bottles is perfect for your Instagram. Corsi has always been a lunchtime favorite with local businessmen and women who keep coming back for its pasta e Fagioli (chickpea and pasta soup), along with other favorites on the very affordable and very Roman menu. Expect traditional Roman dishes like saltimbocca alla Romana (thin veal medallions with prosciutto and sage), carbonara, amatriciana, and trippa alla Romana (Roman-style tripe). Corsi is open for dinner on Wednesday, Thursday, and Friday evenings.

Trattoria Da Danilo is the perfect place to start the evening and any visit to Rome—especially if you’ve never had Roman carbonara before. Da Danilo has one of the best carbonaras in the city and unwavering fidelity to typical Roman dishes like trippa, coratella, and baccalà, and an excellent selection alla griglia (meats from the grill). The vibe is super casual and friendly so that anyone can feel at home.

Bistrot 64 is the perfect spot to end a day of contemporary art hunting in Rome. Located in the off-center Flaminio neighborhood, Bistrot 64 is not the usual Roman restaurant. The decor is minimal, modern, and moody, with dark wood floors and white walls—definitely more bistro than trattoria. Japanese-born chef Kotaro Noda, who trained with super chefs Enrico Crippa and Gualtiero Marchesi, combines Japanese technique and flavors with Roman tradition, evolving typical dishes with innovative flair. Kotara has quietly established himself as one of the leaders of Rome’s new community of culinary creatives. And best of all: Bistrot 64 is the most affordable Michelin-starred restaurant in Rome.

Bistrot 64 is just one of many restaurants redefining Rome’s food culture.

A signature bar by Patrick Pistolesi, Rome’s reigning king of cocktails, Drink Kong is effortlessly cool with its labyrinth of dark rooms and 1980s neo-noir vibe. Pistolesi curated a menu of cocktails inspired by color, but it’s best to talk with any of the bartenders about what you like and don’t like—they’ll know exactly what to do.

It’s all about the view at the Court, the open-air bar niched in the courtyard at Palazzo Manfredi. With a front row to the Colosseo, the best time to pop in for a drink is early evening so you can catch the sunset behind the ancient monument while enjoying mastermind barman Matteo Zed’s clever creations, like the Rising Sun gin, yuzu, and matcha cocktail.

A back alley bar, the retro-style Jerry Thomas is Rome’s after-hours spot for those who like a well-crafted cocktail with a little history and a selection of more than 1,600 bottles of spirits. Be prepared to make reservations—although Jerry Thomas started as a speakeasy, it’s now one of the world’s 50 best bars.

The classic Roman enoteca, Il Goccetto is relatively cheap, cheerful, and very local. The wood-lined room is lined floor to ceiling with bottles (850 labels and counting), and the tables are just as crowded—with even more patrons often standing in the doorway. Don’t expect to eat a full meal here, but definitely try any of the stuzzicchini (hors d’oeuvres), like salumi and cheese, pickled onions, and light salads. 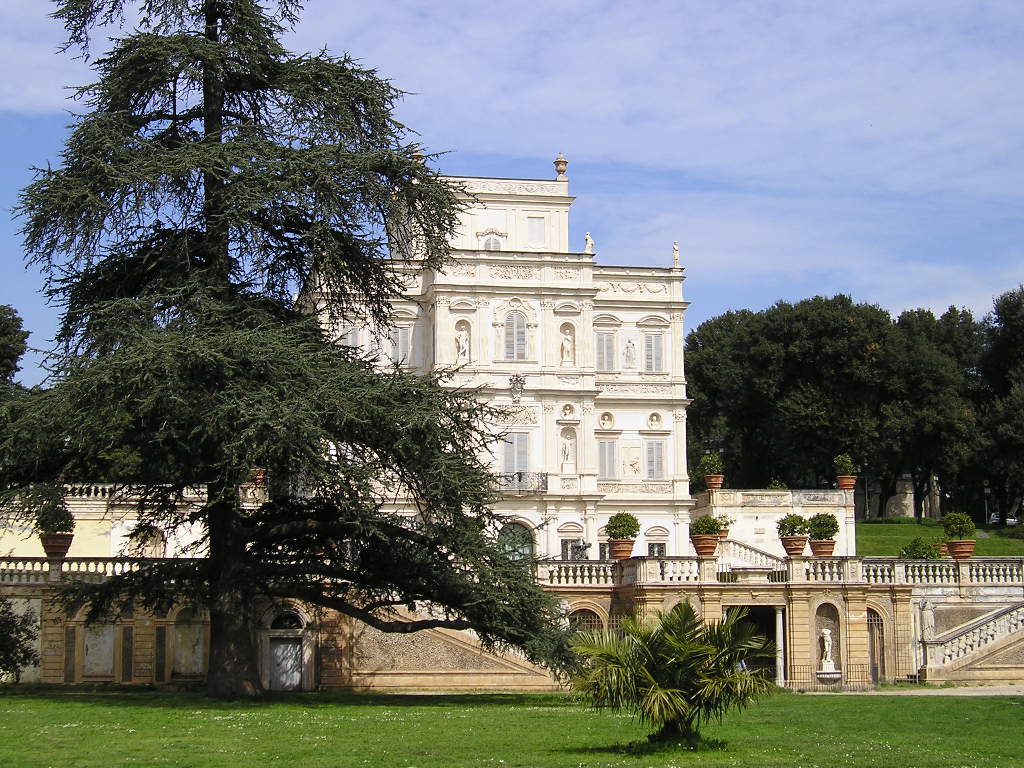 Built in the 17th century, Villa Doria Pamphili sits in the largest park in Rome. 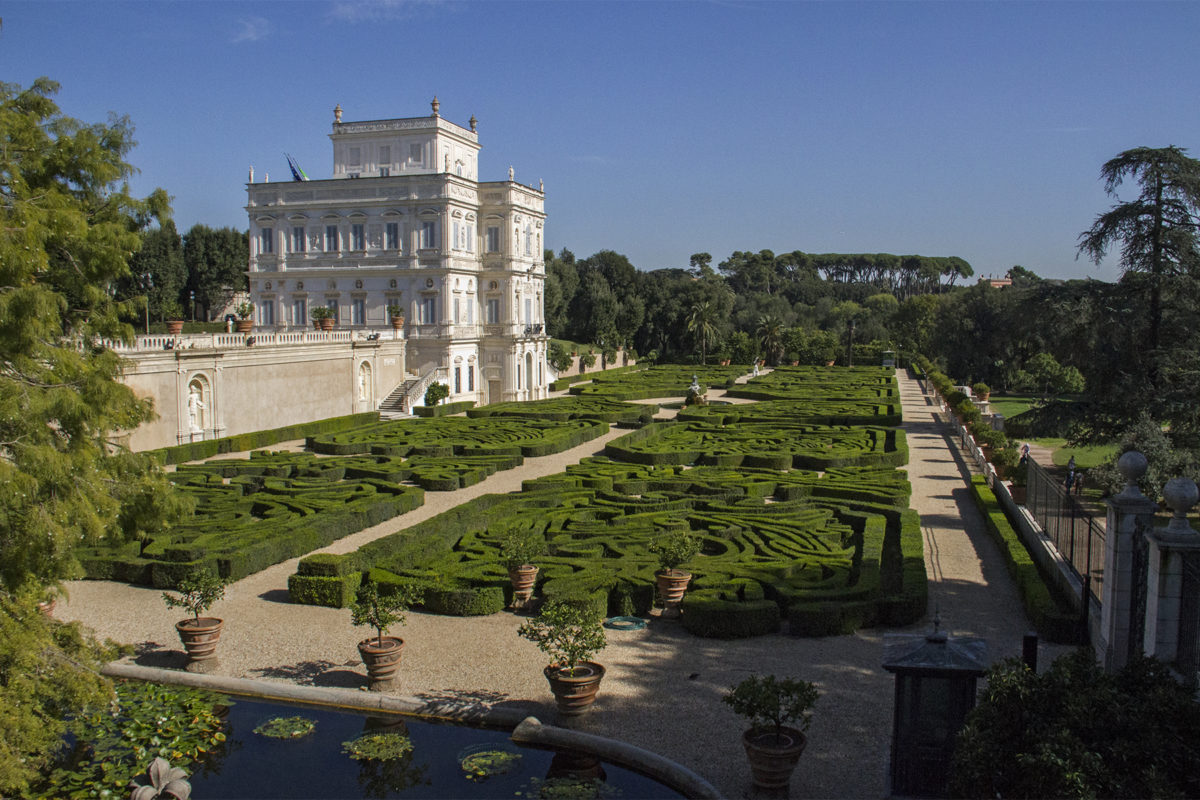 An elaborate garden hides behind the Villa Pamphili. 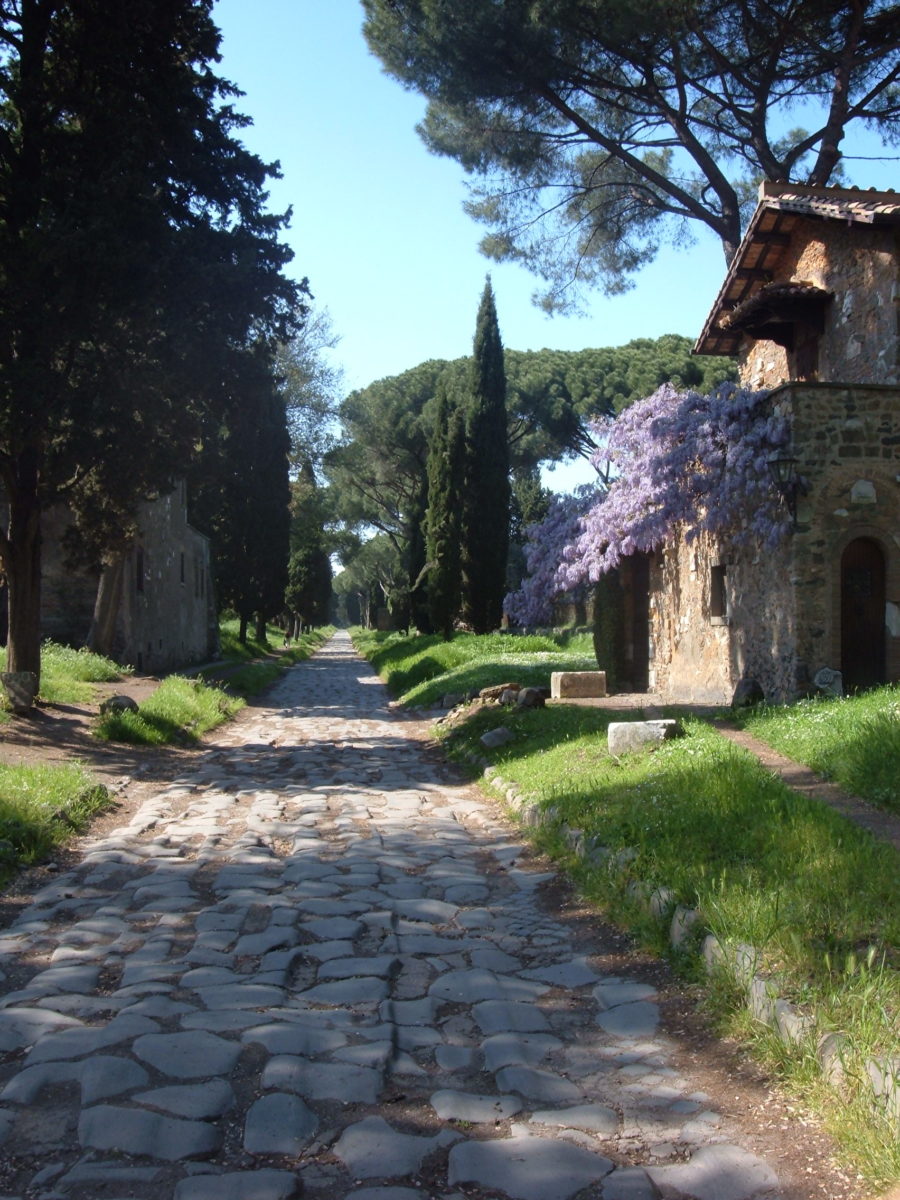 Also known as the Appian Way, the Appia Antica was one of the most important roads in ancient Rome.

The view from the Terrazza delle Quadrighe shows off the city in 360 degrees from the very center of the terrace atop the Victor Emanuel monument. Look one way and you have ancient Rome at your feet; turn around, and the entire contemporary city is laid out in front of you.

Rome may be best described as a historical layer cake. You can bet that wherever you walk, beneath your feet are centuries of history. The Domus Romane at Palazzo Valentini allows you to get a glimpse of what Rome once was.  The archaeological remains of a Roman villa are now part of a multimedia experience—a bit virtual reality meets Indiana Jones.

With nearly 450 acres, Villa Pamphili is Rome’s largest landscaped park and a great escape from the chaos of the city. Villa Pamphili was originally built as a private estate for the Pamphili family. Now state-owned, the park is a beautiful all-ages playground for Calcio pick up games, running, biking, volleyball, and sunbathing.  In the summer months, there is an al fresco concert series.

Follow the ancient Appian way outside the city’s Porta San Paolo gates to a vast and bucolic landscape of ancient tombs, roaming sheep, and lots of green fields covering over 8,000 acres. This is the Parco Appia Antica, a regional park and one of the most beautiful areas for a bike ride—whether beginner or expert mountain biker. Don’t be surprised if you get in a traffic jam guided by local shepherds, who’ll be delivering fresh ricotta cheese the very next day.

For a crash course in the history of Rome, all you need to do is visit the following three museums: Museo del Mercati di Traiano, an archaeological museum and open site that will catch you on the founding of Rome while walking through emperor Trajan’s historic market place; Galleria Barberini, a 17th century palace whose array of Renaissance and Baroque paintings make it one of Italy’s most treasured collections; and finally, a stop at the Museo di Roma in Trastevere, a quirky little museum whose life-sized dioramas vividly detail daily Roman life in the late 1800s.

For more to do in the Eternal City:

The Italian Minimalist’s Secret to Seeking Inspiration in Rome

How to See and Shop Rome Like Vintage Guru Ornella Cicchetti