Worth Traveling For: Rome Cavalieri in Rome, Italy

Breathtaking night time view over Rome from a terrace at the Rome Cavalieri.
SnapshotAnnie Werner

There are certain places—show-stopping hotels, award-winning restaurants or local dive bars, incomparable vintage shops—that are worth planning your whole trip around. The Rome Cavalieri in Rome, Italy is one of those places.

It’s good to have options. And in a city like Rome, there are plenty of them—especially when it comes to hotels. But no hotel experience will be quite like the one offered at Rome Cavalieri, A Waldorf Astoria Resort, which sits atop Monte Mario, the highest hill in Rome and just outside City Centre, with sweeping views of the Eternal City—complex and glittering at night—complimented with expert service and luxury accommodations.

Sure, it’s not the kind of place that’s dropped right in the middle of Rome’s hustle and bustle—it’ll take you about a 10-15 minute car or (hotel-provided) shuttle ride to get to the city’s main streets—but that’s why the hotel, managed by the Waldorf Astoria properties, has become an attraction all its own. 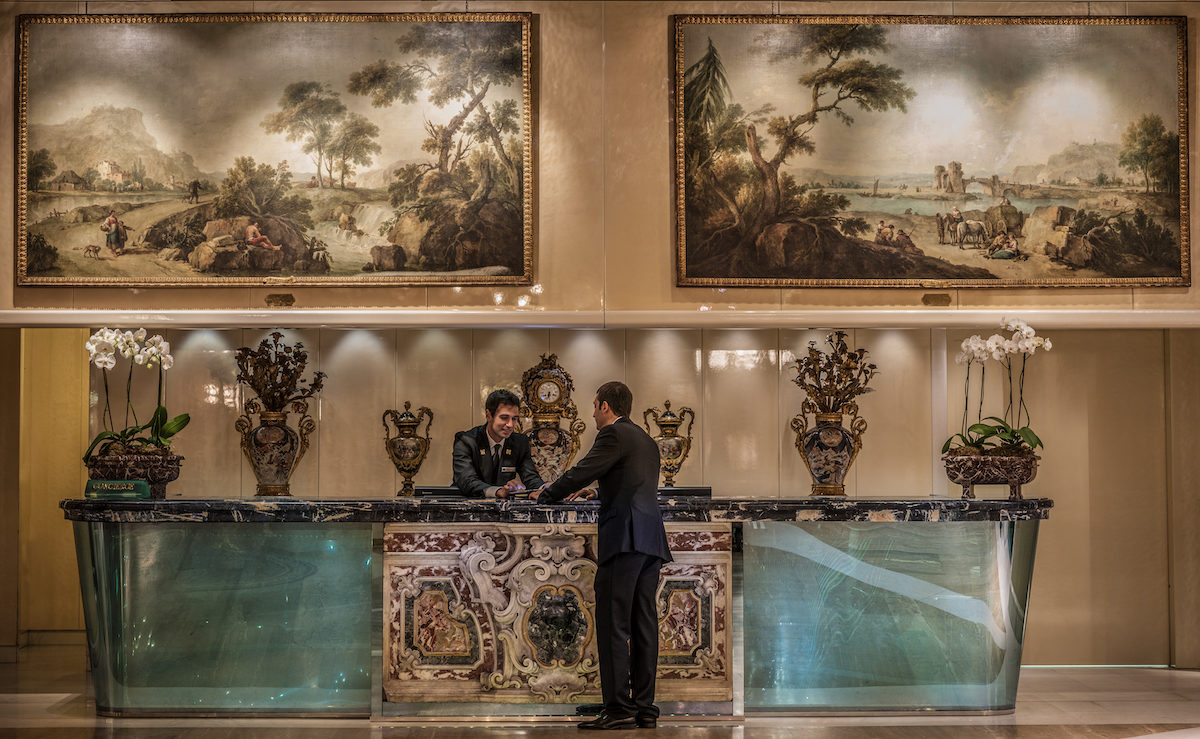 The concierge desk is surrounded by the hotel's classical art collection.

Why it’s worth traveling for:

The views facing the Eternal City are beyond any other view of Rome you might encounter, but what’s on view inside the hotel is just as captivating. Boasting one of the largest private collections in a single hotel, the Rome Cavalieri is dripping in 17th- and 18th-century art (with an interior to match). The hotel staffs two art historians to accompany guests on walk throughs at their request. Standout pieces from the collection include an officially designated Italian national treasure, a triptych in the main lobby painted by Giovanni Battista Tiepolo—the only piece behind glass and what gives the hotel bar its name—a collection of large-scale handmade tapestries, and period furniture you can actually sit on.

Even if you’re not staying at the hotel, it’s worth a visit—drop by for a cocktail at the Tiepolo Lounge & Terrace, or make a reservation at the Michelin-starred La Pergola, helmed by Heinz Beck. There’s also a luxe, full-service spa to take advantage of. 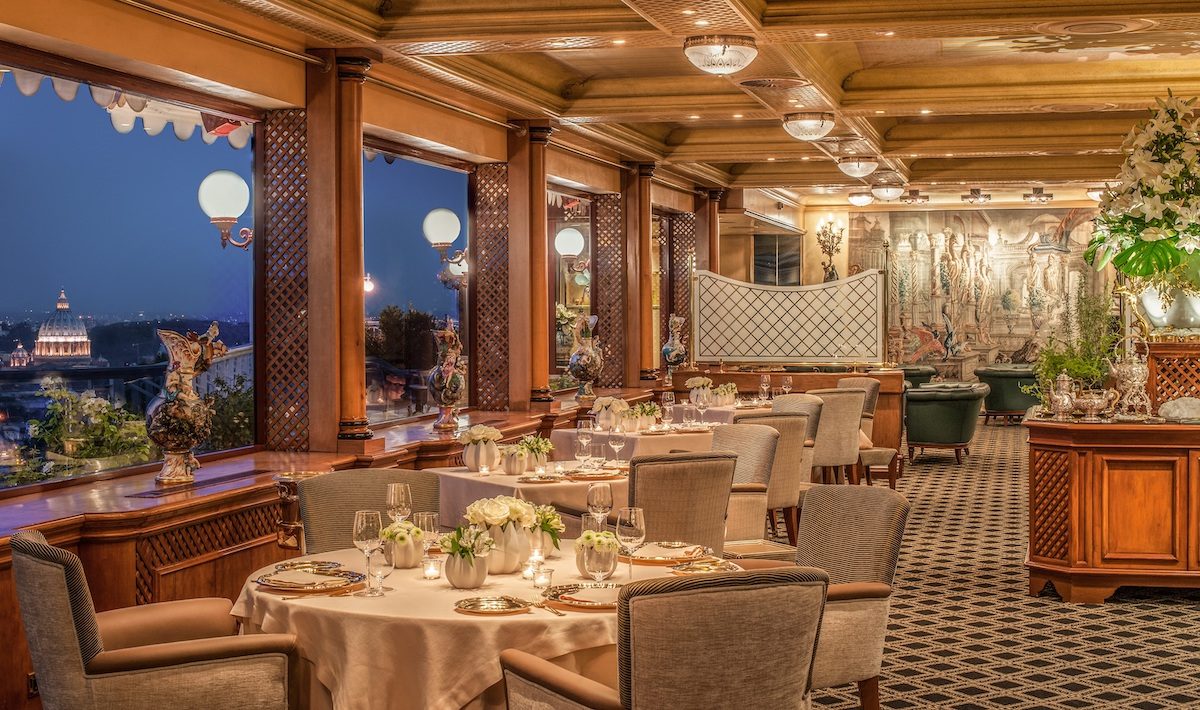 La Pergola is Rome's only restaurant with three Michelin stars. 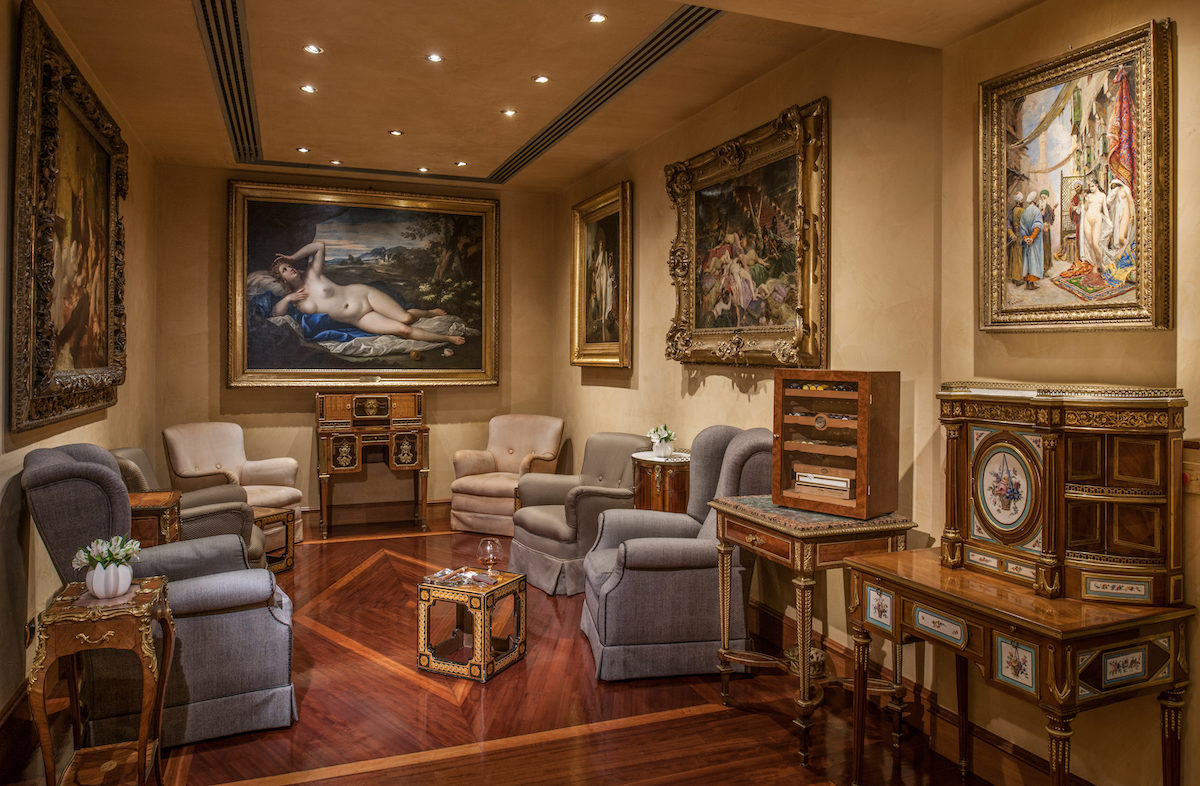 Stop by the cigar lounge for a post-dinner puff.

You’re a Classical Art history nerd (or just like to surround yourself in lavish Renaissance-era decor), you like good, standard Italian food, and/or treating yourself to a spa day—the Cavalieri Grand Spa is sure to relax any weary traveler.

If you’re the type of person who likes to have their pick of the crop—whatever the crop may be—you’ll be impressed with all the various menus offered at the Cavalieri: from the choice of pillow you’d like to rest your head on to one of the most extensive sparkling water lists you’ll ever encounter (and if their sparkling water list is something to write home about, imagine the wine). 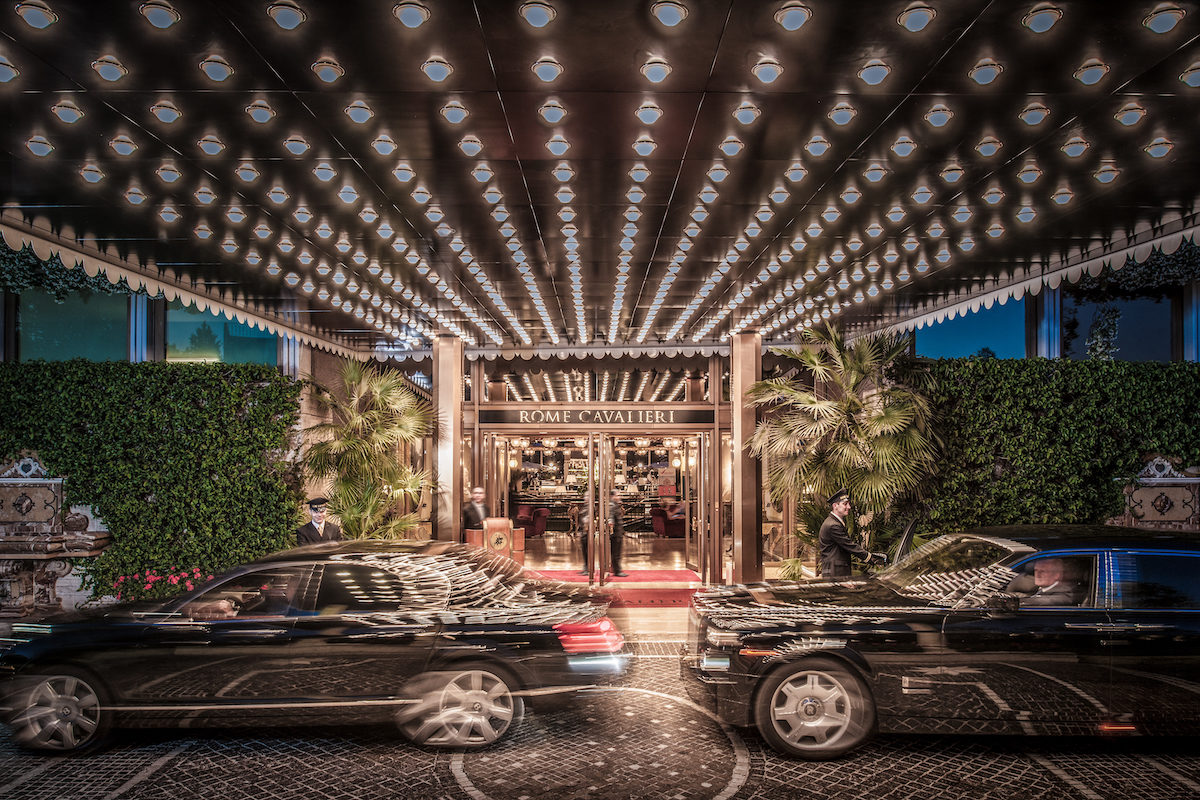 The entrance to the Rome Cavalieri. The hotel offers airport transfers in luxury cars. 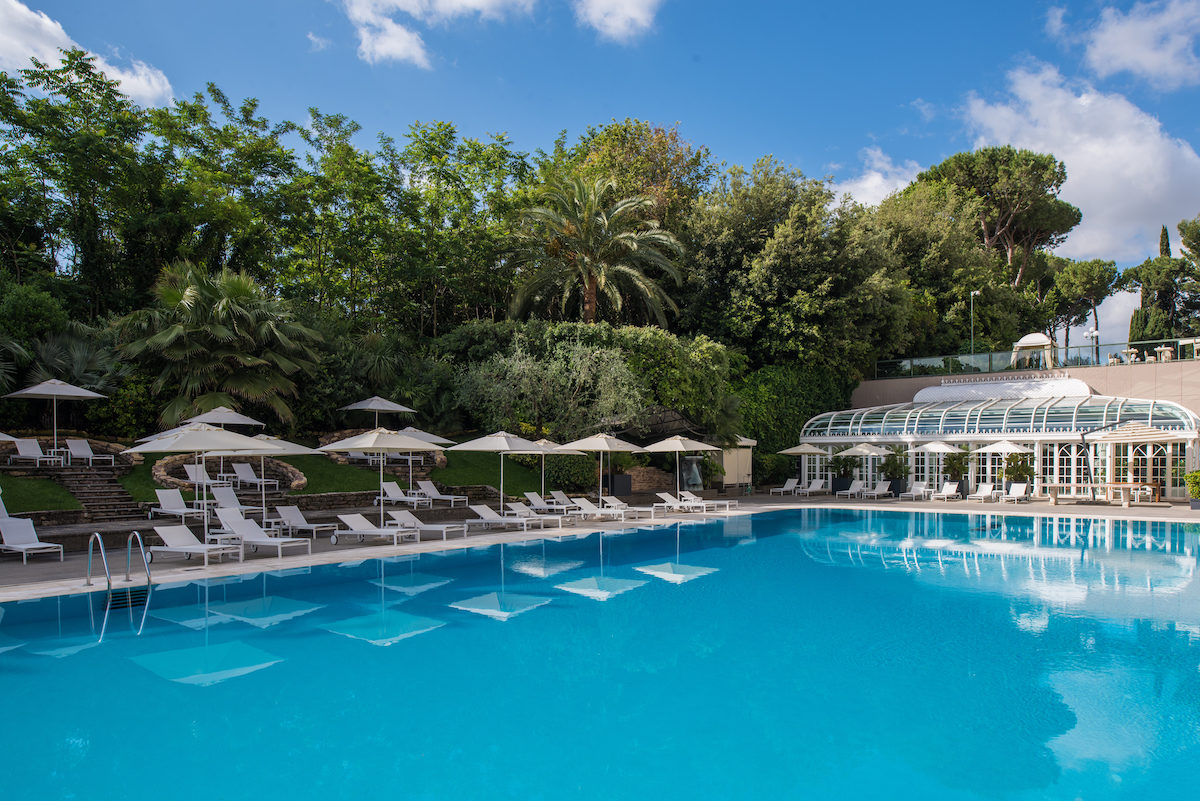 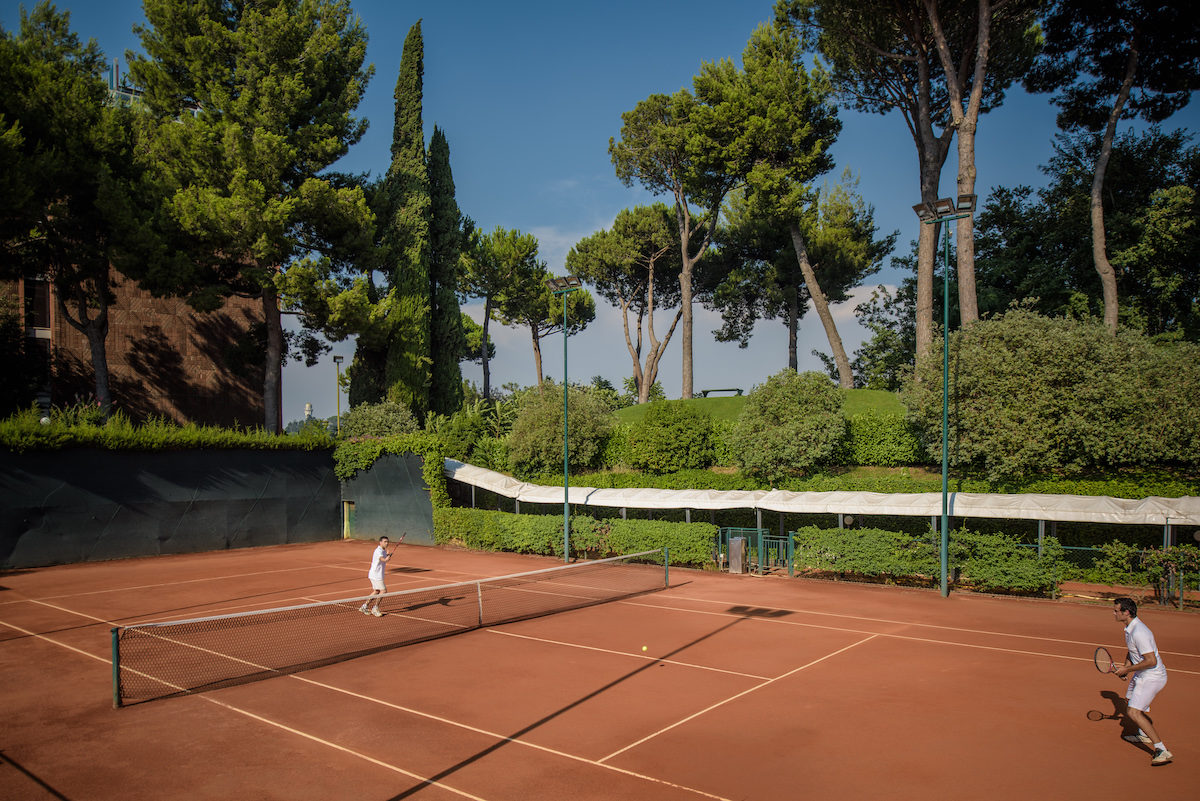 If you've ever wanted to practice your backhand on a clay court, you've come to the right place. 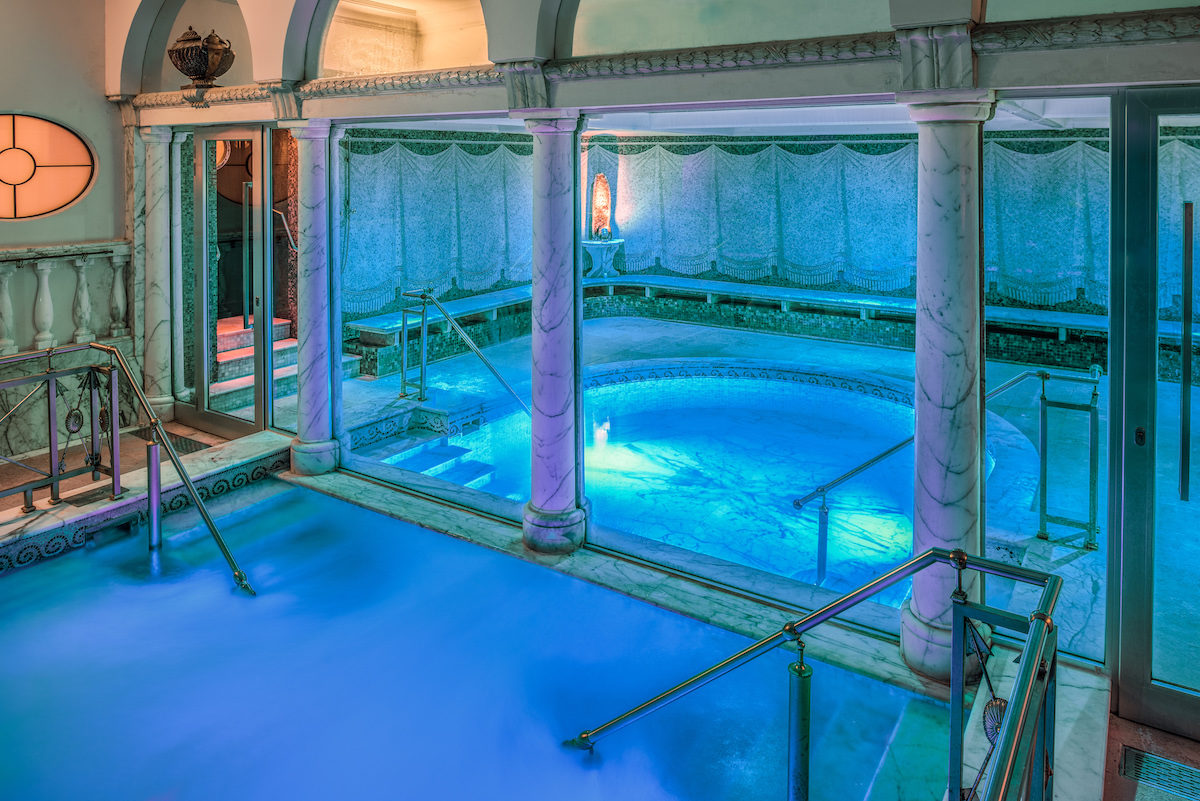 Jacuzzi at the Grand Spa.

Rooms start at $348/night with breakfast included, and can go up to tens of thousands for penthouse suites.

Wealthy families and conference attendees from around the world (the hotel is host to various conferences throughout the year) who are more than willing to chat you up at Tiepolo Lounge. 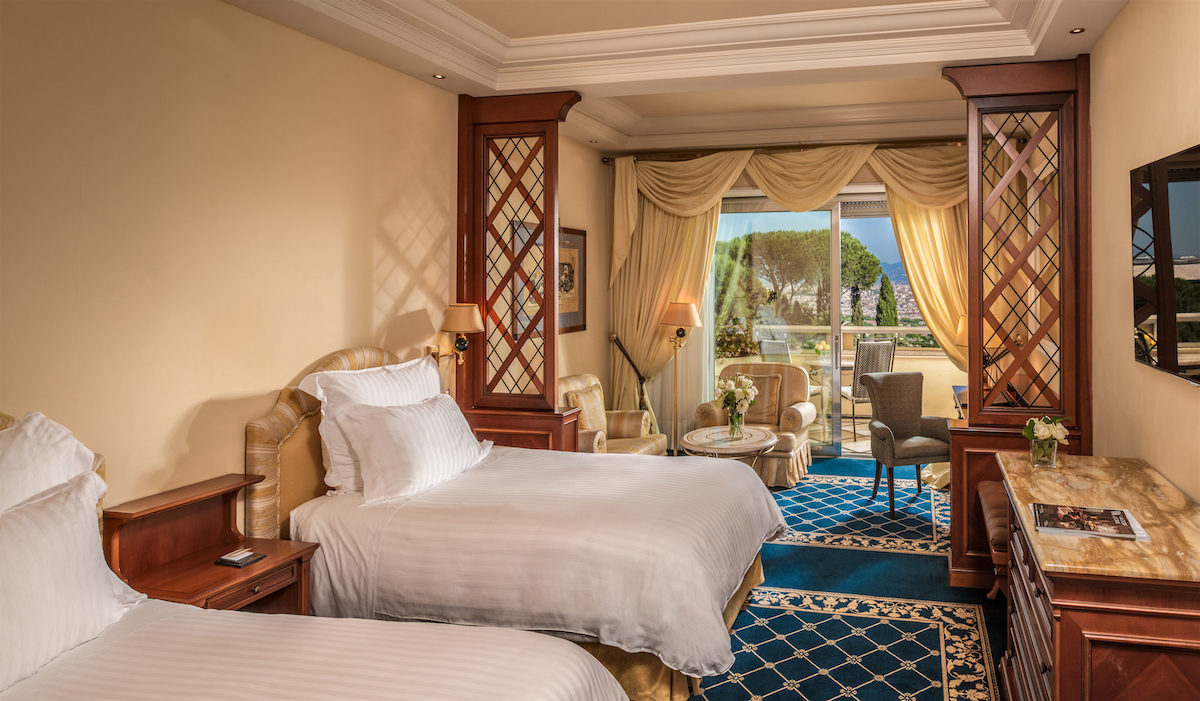 Twin Deluxe room with a view of Rome.

Bring cash for cabs down to the City Centre in case you miss the hotel shuttle. And don’t be afraid to dress your best for drinks at the lounge or any of the restaurants.

The hotel used to be the very first international Hilton, and locals mostly still refer to it as that. If you take a taxi, he may look puzzled if you try to pronounce “Cavalieri” on its own or even simply “Waldorf Astoria” (the hotel’s new managers), but if you say “the Hilton,” you’ll get a knowing nod.

There’s plenty to make time for at the hotel itself—from the Grand Spa to the many bars and restaurants. If you’re looking for a nature fix—a Roman rarity—stroll the park grounds of Monte Mario, which is owned by the hotel and provides peaceful views of the city.