How to Spend a Long Weekend in Portland, Oregon

The best places to stay, eat, drink, and do to immerse yourself in Portland, Oregon.

Like so many cities we love, the draw to Portland is its people. Just as those who traveled west to the state of Oregon for new opportunities in the 1800s, today’s residents are their own type of pioneers—ones who are making space for creativity, diversity, and a whole lot of good food and drink.

Even as the city’s population and development have swelled in the last decade, the best parts of Portland are rooted in authenticity and openness—there’s the indie punk music scene, but also the mom n’ pop strip clubs and the women keeping radical performance alive. Oregon hasn’t totally shed its reputation as a white utopia (only 5.7% of Portland identified as African-American, and .08% as Native American in the last U.S census), but creatives of color and their allies are using their work to send a broader message to Portland—and the country.

These people have infused Portland’s businesses with a sense of innovativeness and originality that’s unique to the city. From natural wine bars to sustainable seafood restaurants, vintage shopping to any number of outdoor activities, here’s how to spend a long weekend in Portland, Oregon. 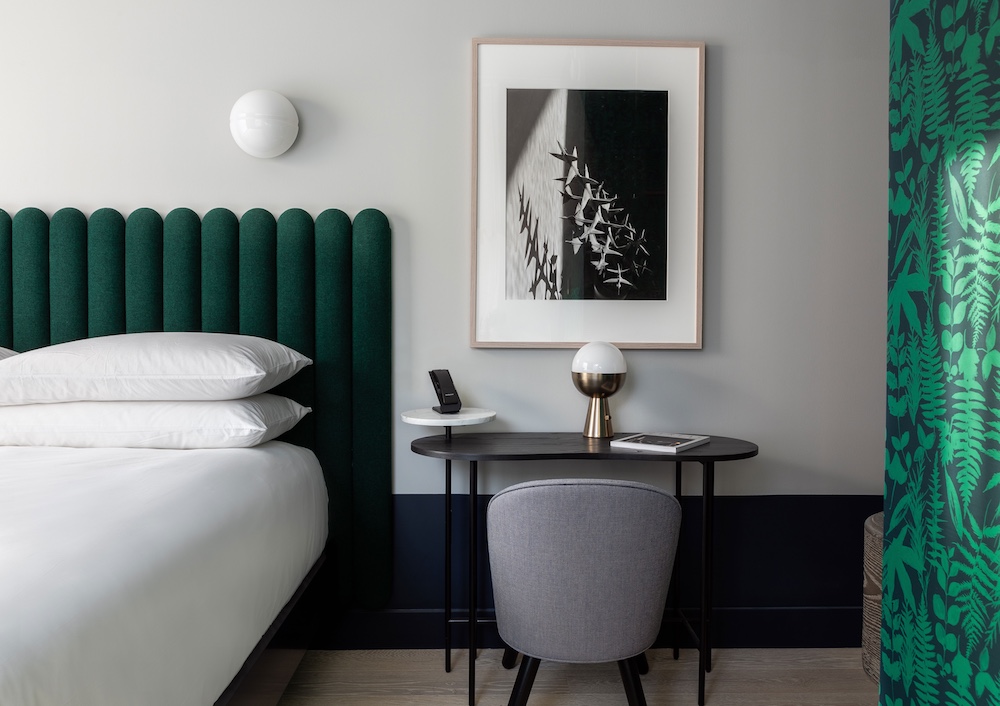 The Woodlark Hotel in downtown Portland combines art deco elements like velvet and aged brass with floral wallpaper and lots of plants. 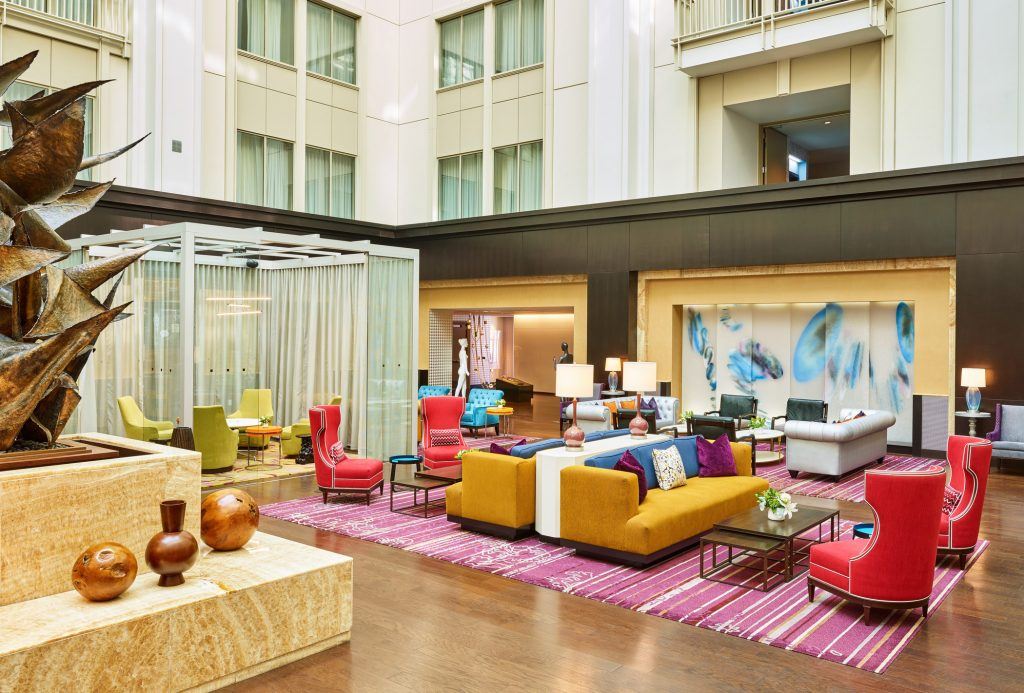 The cavernous "Living Room" with vaulted ceilings in the center of the Nines Hotel.

The Best Hotels in Portland

Located in the heart of downtown right by Pioneer Courthouse Square, The Nines is Portland’s most classic hotel option. The 15-floor building was constructed in 1909, and today the hotel has combined the historic with funky design details. Departures, the Asian-fusion restaurant on the 15th floor offers panoramic views of the city, including Mt. Hood, which is always looking over the City of Roses at 11,250 feet. The Nines receives all of its energy from renewable resources, and has a plumbing system that saves half a million gallons of water annually.

The newest addition to the Provenance Hotels portfolio, the Woodlark is everything you’d imagine a Portland hotel to be. Formerly two early 19th-century hotel buildings that were renovated and fused together, the Woodlark combines art deco elements like velvet and aged brass with floral wallpaper and lots of plants. At the hotel’s restaurant, Bullard, you can find a southern-style menu made with Pacific Northwest ingredients. The hotel bar, called Abigail Hall, is named after Abigail Scott Duniway, a Portland Suffragist who founded The New Northwest, a weekly newspaper devoted to women’s rights—she led meetings here over a century ago. 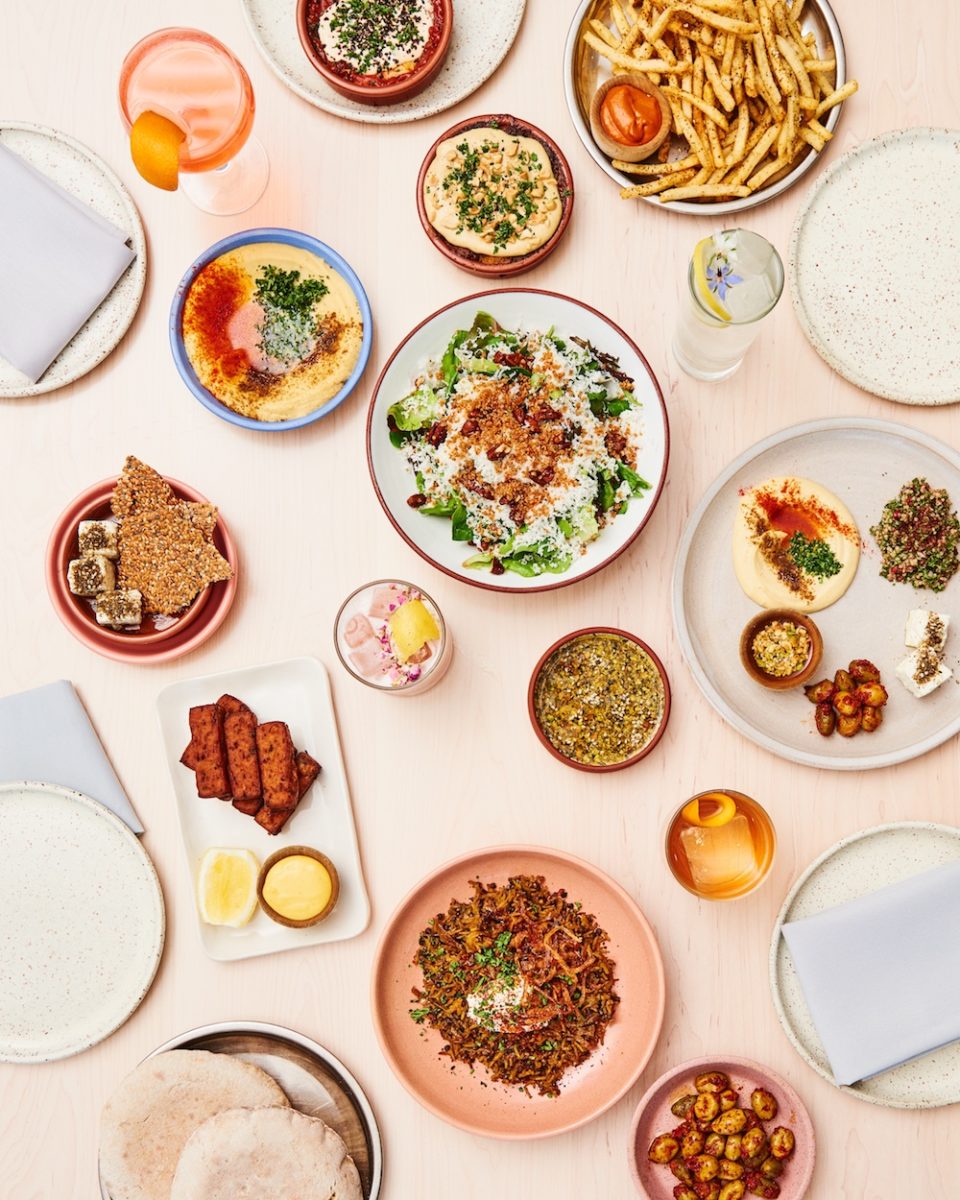 The spread at Tusk, a Middle Eastern-inspired restaurant that is “locally sourced, aggressively seasonal.” 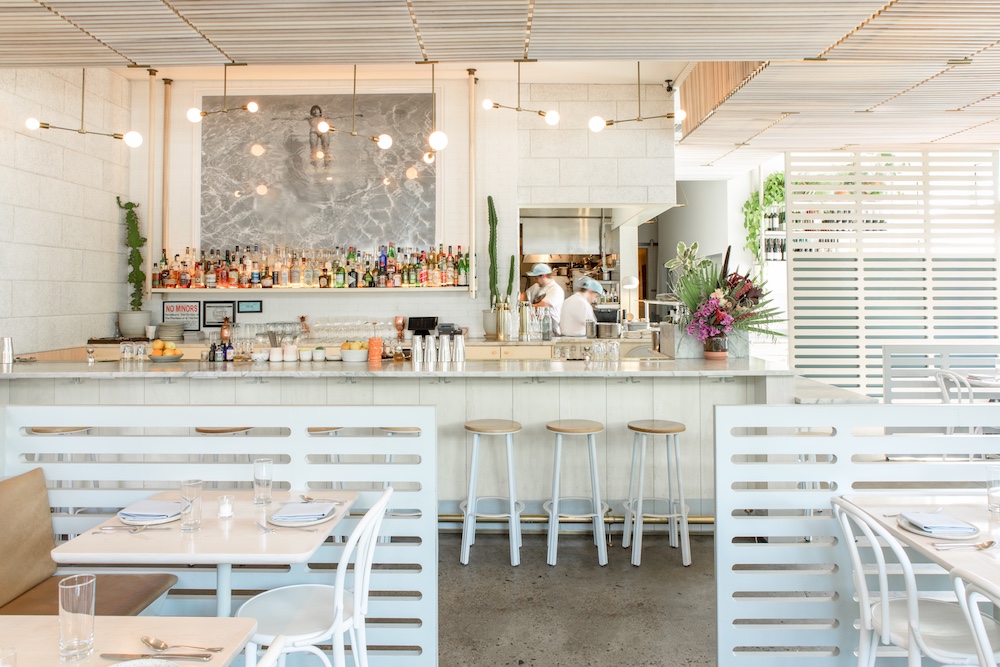 The interior of Tusk.

The Best Restaurants in Portland

The tagline at Tusk is “locally sourced, aggressively seasonal.” This Middle Eastern-inspired menu features chicken skewers, baked cheese, mezze, and lots of veggie-centric dishes, like kale with potatoes, daikon, and chickpea miso. Don’t sleep on the cocktail offerings here, which include the Capetown Highball with caperitif, gin, St. Germaine, and apricot liqueur and The Natural Life with cilantro-infused mezcal and cara cara orange. The outdoor patio makes this the ideal summer dinner destination, perfect for large groups.

This 18-seat restaurant located inside a former music venue serves up a fish-focused tasting menu three nights a week, from Thursday to Saturday (Sunday to Wednesday they’re open only to private parties). The focus here is on sustainably-sourced seafood, including bycatch (things accidentally caught by fisherman) and invasive species like sea urchin. Dishes also include foraged seaweed, sea snails, and rock crab. The menu is pricey—$125 with a $75 optional wine pairing—but well worth it for dishes like pacific octopus with green garlic and dungeness crab pie. Chef Jacob Harth (who’s in his late 20s) was named an Eater Young Gun in 2019, making this restaurant one to watch. 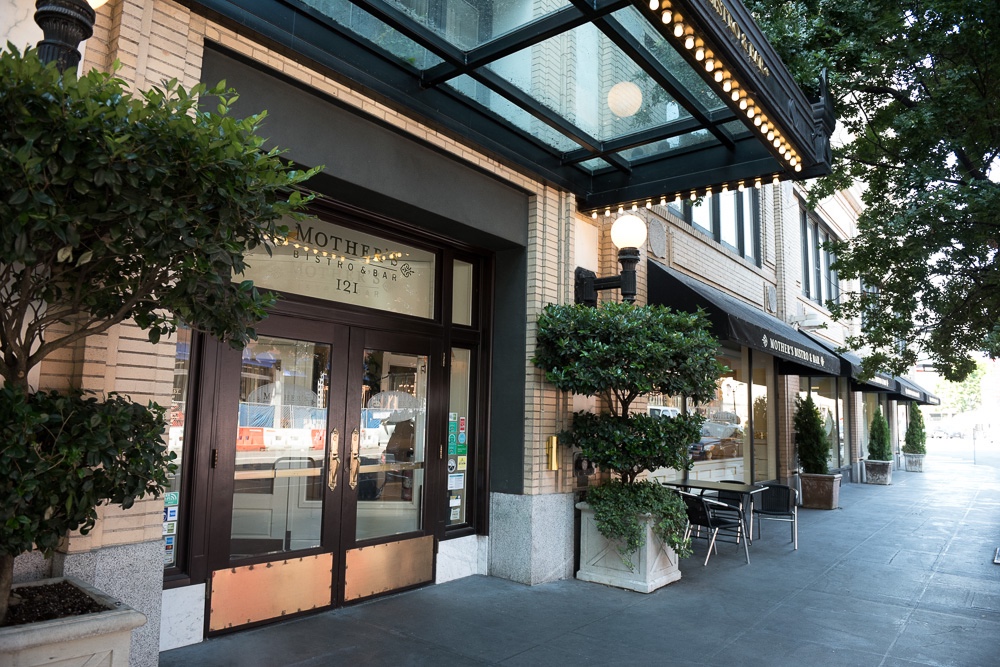 Go to Mother's Bistro for a plate of pancakes and an exceptionally solid Bloody Mary.

Sometimes you just want a plate of pancakes and an exceptionally solid Bloody Mary. And that’s what you’ll find at Mother’s, a supersized bistro in downtown Portland. The concept here is that the best meals aren’t necessarily found in restaurants—often they’re cooked by loved ones at home (like your mother). And so you’ll find classics on the menu like a lox platter, corned beef hash, turkey reuben, and fried chicken, in addition to a monthly “M.O.M. Menu” with dishes from a featured Mother of the Month. A recent M.O.M. menu included stuffed cabbage rolls and Hungarian pork goulash.

Ro Tam opened the first location of Either/Or in Sellwood in 2013. The coffee shop was so small—only 300 square feet—that when she started experimenting with making her own chai, she had to leave all the doors open so the space wouldn’t overheat. The smell permeated the block, and it became a marketing function of sorts. Flash forward five years, and Tam opened a second, bigger location in Northeast, with the goal to become a full service bar in addition to an all-day cafe. As a first generation Vietnamese person, Tam says her food is a hybrid of flavors, much like herself. Wonton noodle soup and rice bowls with house-made kimchi are on the menu, in addition to breakfast burritos and nachos. 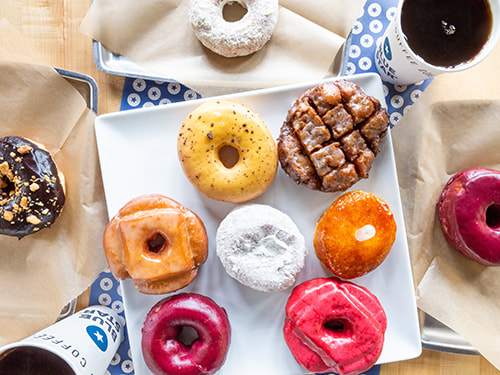 There is much discussion around the best donuts in Portland, but our vote is solidly for Blue Star Donuts. There are locations all over the city (including the airport if you need a last minute fix on your way out of town), and the chain gets bonus points for their vegan donut selection. The orange olive oil donut is what dreams are made of, and the Mexican hot chocolate, blueberry basil cake, and sugar n’ spice, and passion fruit cake round out the vegan offerings. 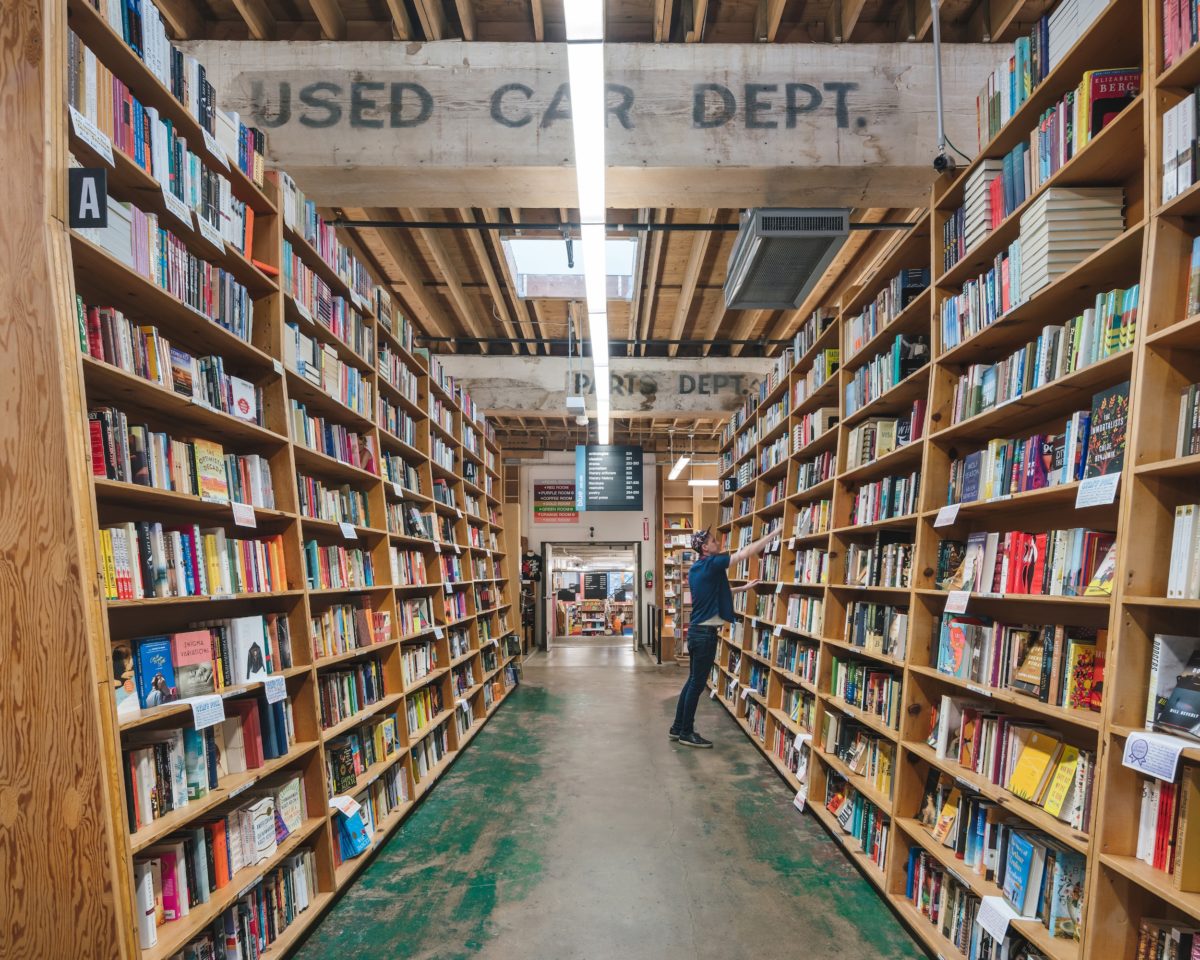 We dare you to stay at Powell's Bookstore for less than an hour. 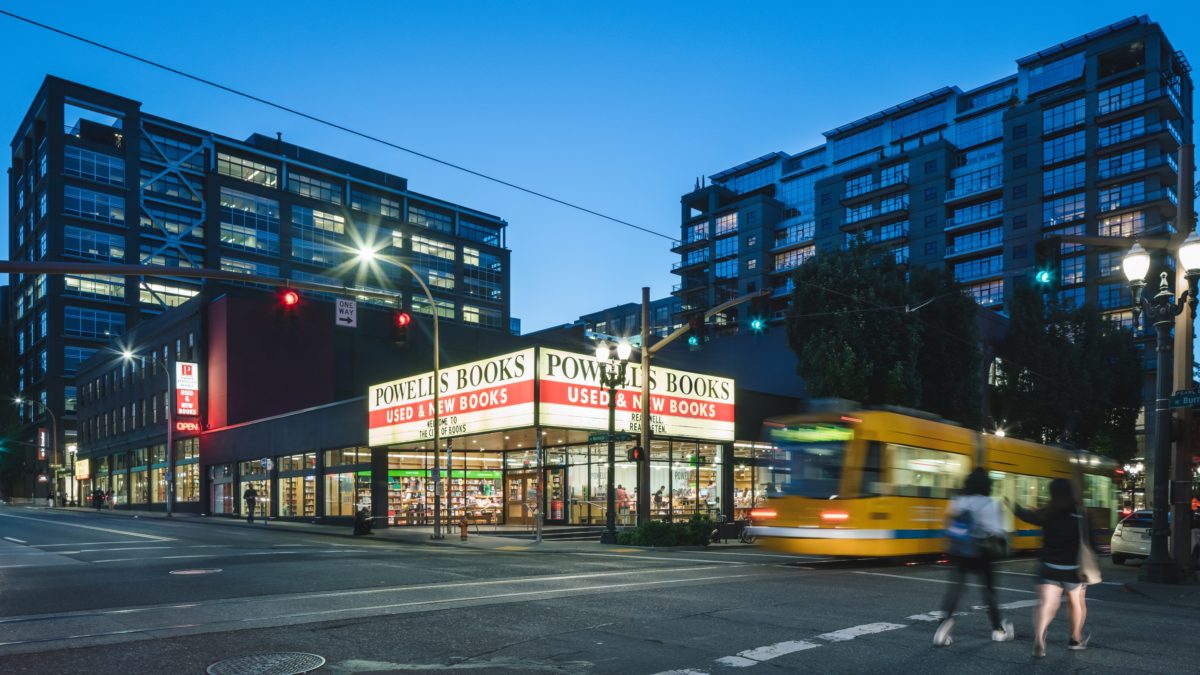 Things to Do in Portland

Stop and Smell the Roses

A fun fact: Portland has the ideal climate for roses, thanks to its warm dry summers, mild winters, and heavy clay soils. During World War I, nursery owners began planning a large rose garden to protect European rose species, which became the International Rose Test Garden in 1917. Now over 100 years old, the Washington Park garden covers 4.5 acres with over 8,000 rose plants—more than 550 different species. The smaller but equally lovely (and less crowded) Peninsula Rose Garden in Piedmont is a great place to set up for an afternoon reading session or picnic. Outdoor opportunities abound here—an easy hike up Mt. Tabor, with views overlooking the city, makes it obvious why people are drawn to Portland’s balance of nature and city.

If you consider yourself more of a scavenger than shopper, Portland is the place for you. At Workshop Vintage, find a curated selection of mid-priced clothing and home goods from the 50s, 60s, and 70s. Carve out a decent amount of time for the cavernous House of Vintage, a warehouse full of reasonably-priced old Levi’s, rock tees, colorful nylon jackets, and lace dresses, among many many other things—the shop is a prop and costume supplier for TV shows such as Portlandia, The Librarians, and Grimm. Powell’s Bookstore is on everyone’s Portland list, but it’s there for a reason. The giant, independent seller of new and used books has everything from the bestsellers to indie literary journals. If you’re feeling overwhelmed, follow the lead of the “Staff Picks” signs all over the store. 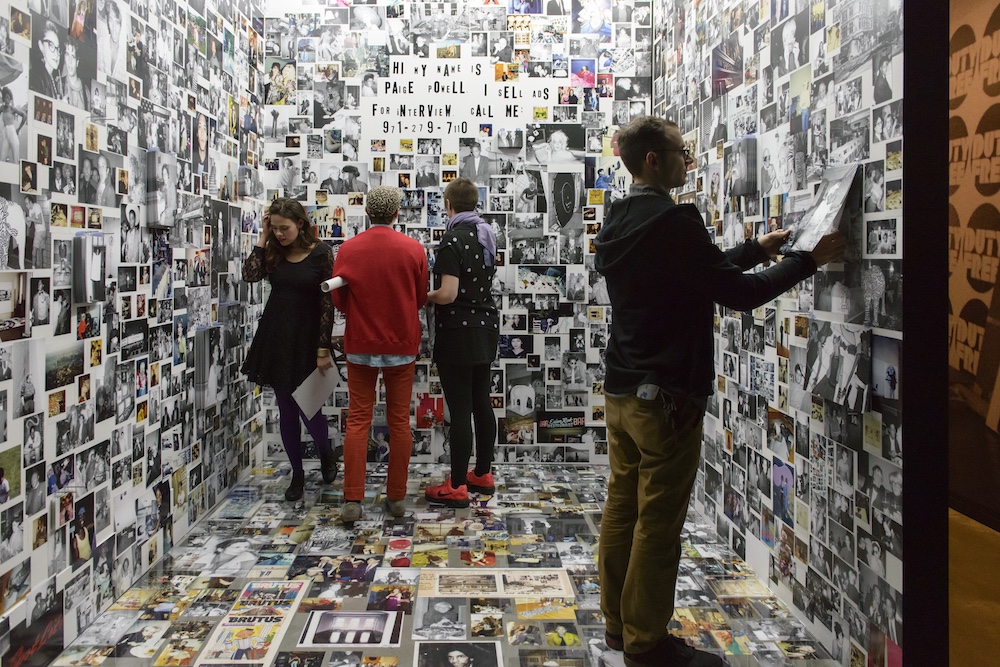 The Portland Art Museum was founded in the late 1800s, making it the oldest in the Pacific Northwest. 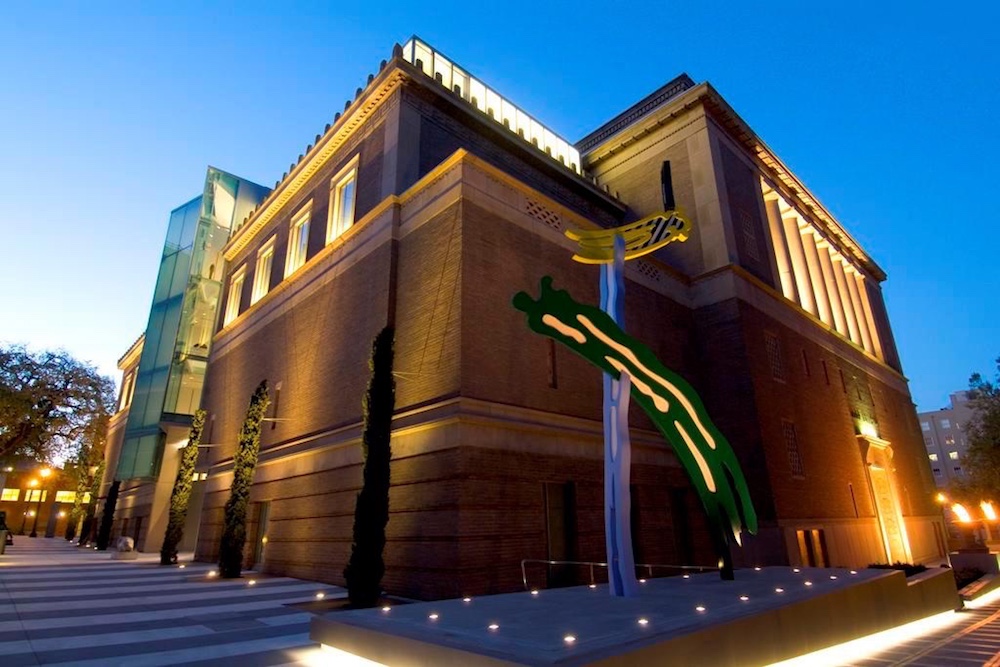 "Brushstrokes" by Roy Lichtenstein outside the Portland Art Museum.

The Portland Art Museum was founded in the late 1800s, making it the seventh oldest museum in the United States, and the oldest in the Pacific Northwest. In addition to its extensive permanent collection, rotating exhibits have featured everyone from Andy Warhol, Anish Kapoor, Steve McQueen, conceptual artist Hank Willis Thomas, and photographer Fazal Sheikh, who photographs displaced and marginalized communities around the world. For a less institutional approach to art, check out Ori Gallery, which amplifies the voices of trans and queer artists of color. 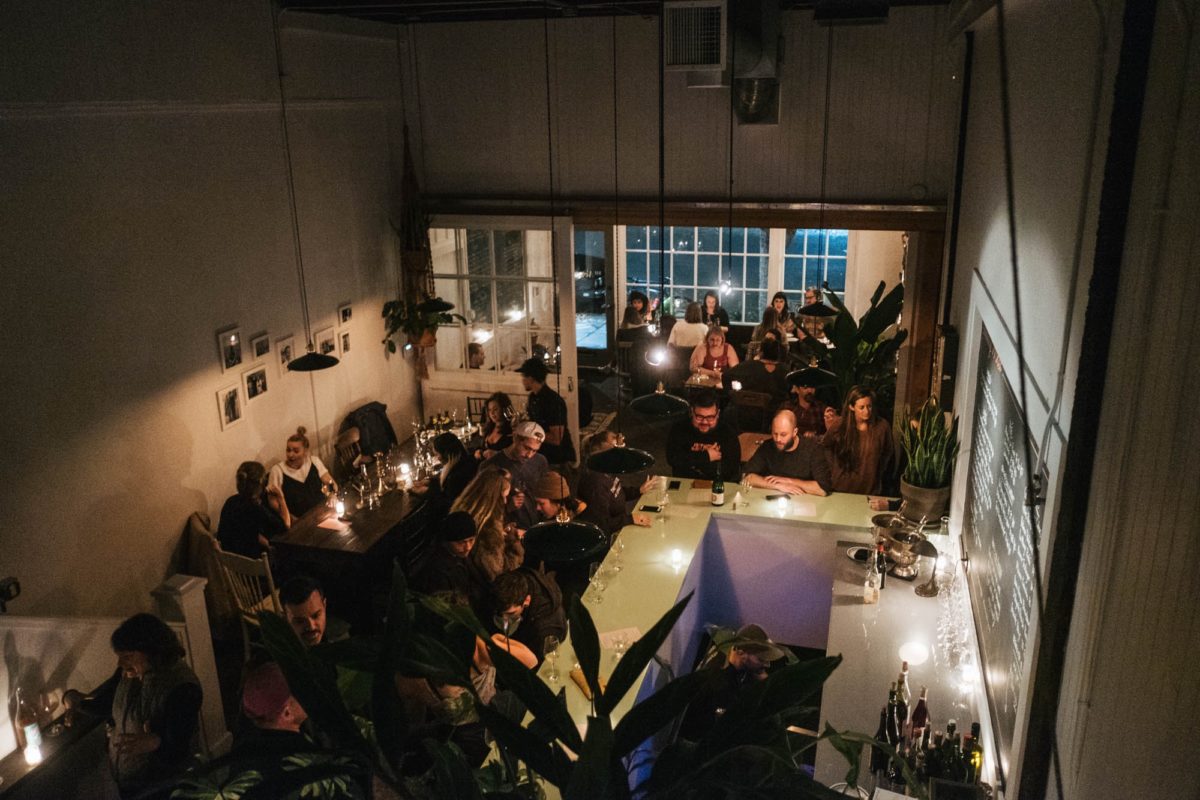 The crowd at Bar Norman, a wine bar in the Southeast neighborhood of Portland, Oregon. 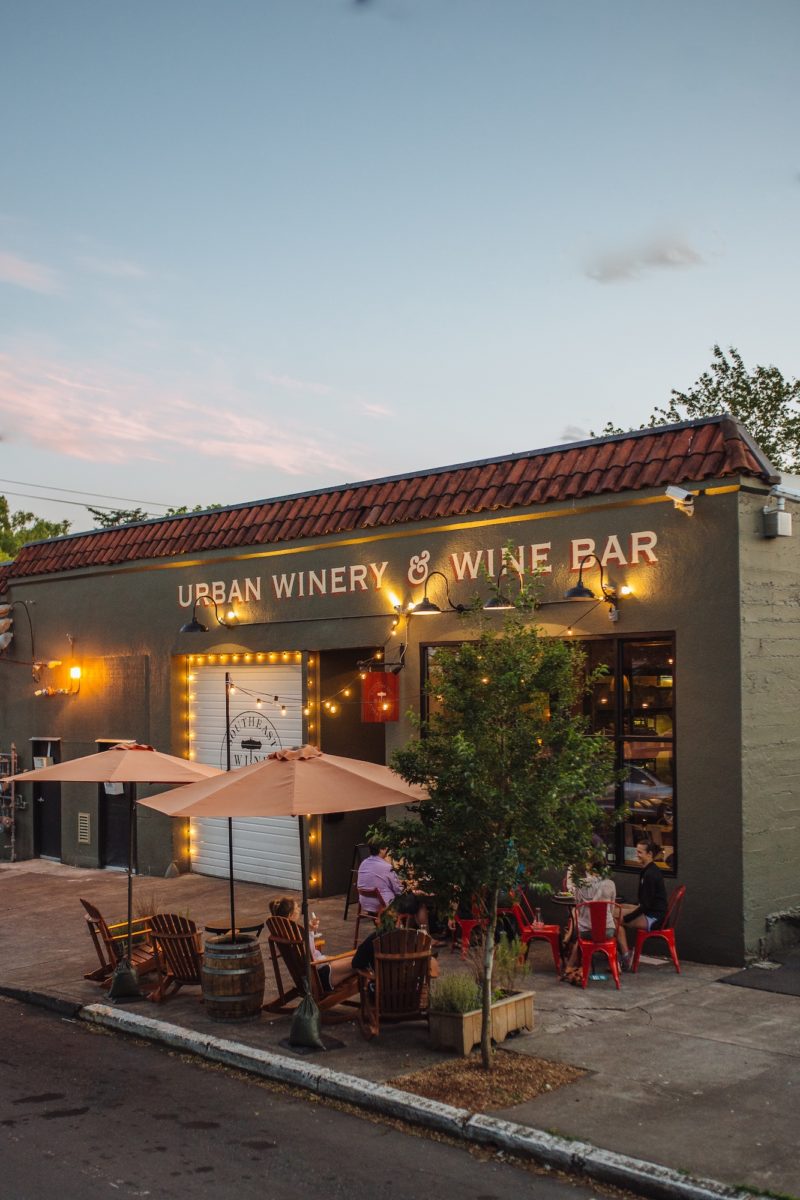 At Southeast Wine Collective, pair your wine with everything from bar snacks to comfort plates. 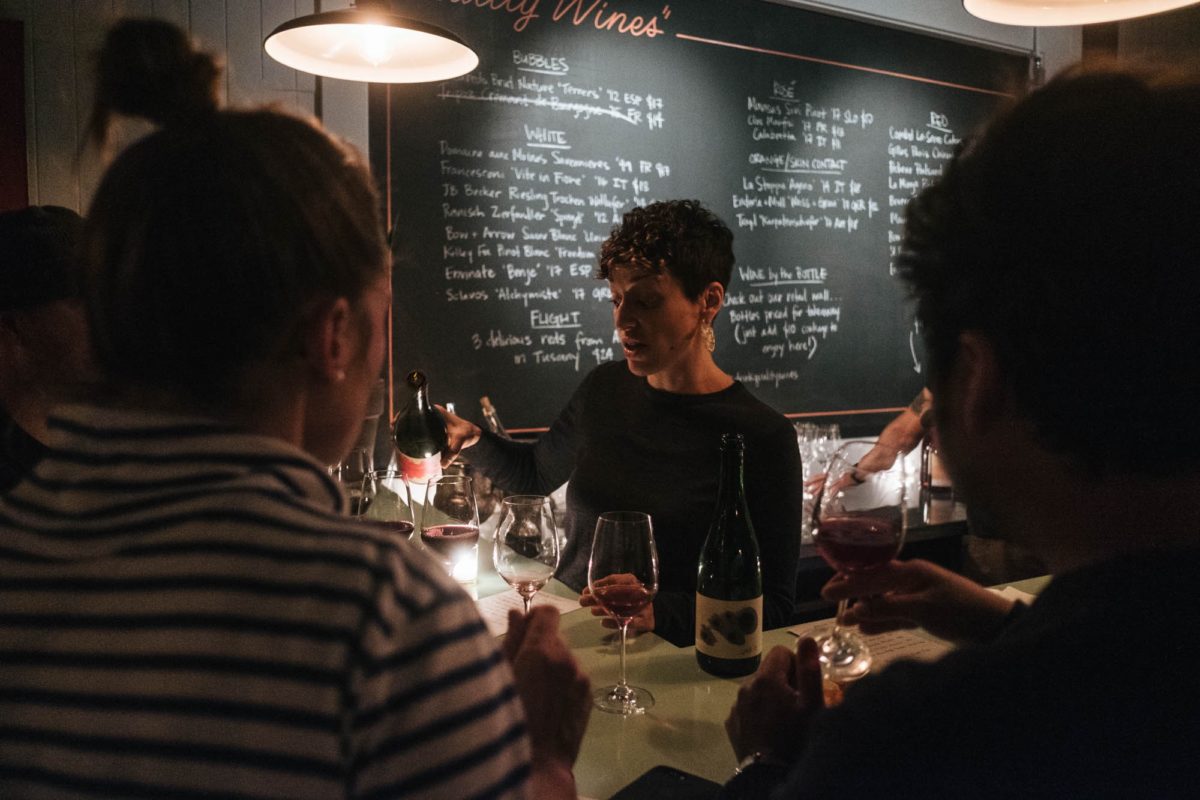 The Best Bars in Portland

Did you even go to Portland if you didn’t sip a craft brew on a patio in the city that started the movement? For anyone looking for an introductory course to sours (think a kombucha/beer hybrid), Cascade Brewing Co. is your spot—for over two decades, they’ve been creating world-class sour ales using local fruit and wine barrels. Head to Occidental Brewing Company for German-style beers, Upright Brewing for French and Belgian beers, and Great Notion Brewing for fruity IPAs and “culinary-inspired” sours and stouts. And this is seriously just the start of the list.

If you’re more of a wino, fear not—Portland is (unsurprisingly) a frontrunner in the natural wine movement. The design-lover’s Bar Norman sits at the “intersection” of natural, with a list that features wines made from organic or biodynamic farming, often with low amounts of sulfur and native yeast fermentation. Southeast Wine Collective is part winery, part wine bar, and part restaurant, with a menu featuring deviled eggs and shrimp and grits, plus a wine list featuring wines made directly on site. At Les Caves, cozy up in this underground venue from the winemakers who run Ovum and Golden Cluster—two of the most exciting labels in the New Oregon Wine scene.

The Pacific Northwest’s grunge movement may have ended before the turn of the millenium, but there’s still a huge indie music scene in Portland. Check the Portland Mercury’s robust music calendar to see what’s on each night, or take your chances at the Roseland Theater, Star Theater, or Mississippi Studios.