Liv Osthus has been stripping in Portland for 20 years under the name Viva Las Vegas.
IndexEmma Glassman-HughesCeleste Noche

The city of Portland, Oregon, is famous for many things, but those who know it for its donuts or hipsters may be surprised to learn that it’s also the per capita strip club capital of the country, with 54 nude clubs scattered around a city of just 647,000 people.

Here, the proliferation of adult entertainment can be linked, in part, to official state documents: Oregon is the only state with a constitution that specifically protects “obscenity” under the First Amendment, following the 1987 case State v. Henry. The stipulation allows full nudity and a full bar (with hard liquor) under the same roof. “I found it really icky when I went to New York City and you had to wear a G-string,” says Liv Osthus, a writer, punk rock musician, and stripper who performs at Mary’s Club under the name Viva Las Vegas. Industry folks just call her Viva. “To me it implied shame. Those workers are like, ‘Oh, you Portland girls are whores. You don’t even cover that stuff.’ And it’s like, ‘No, that stuff is beautiful!’” 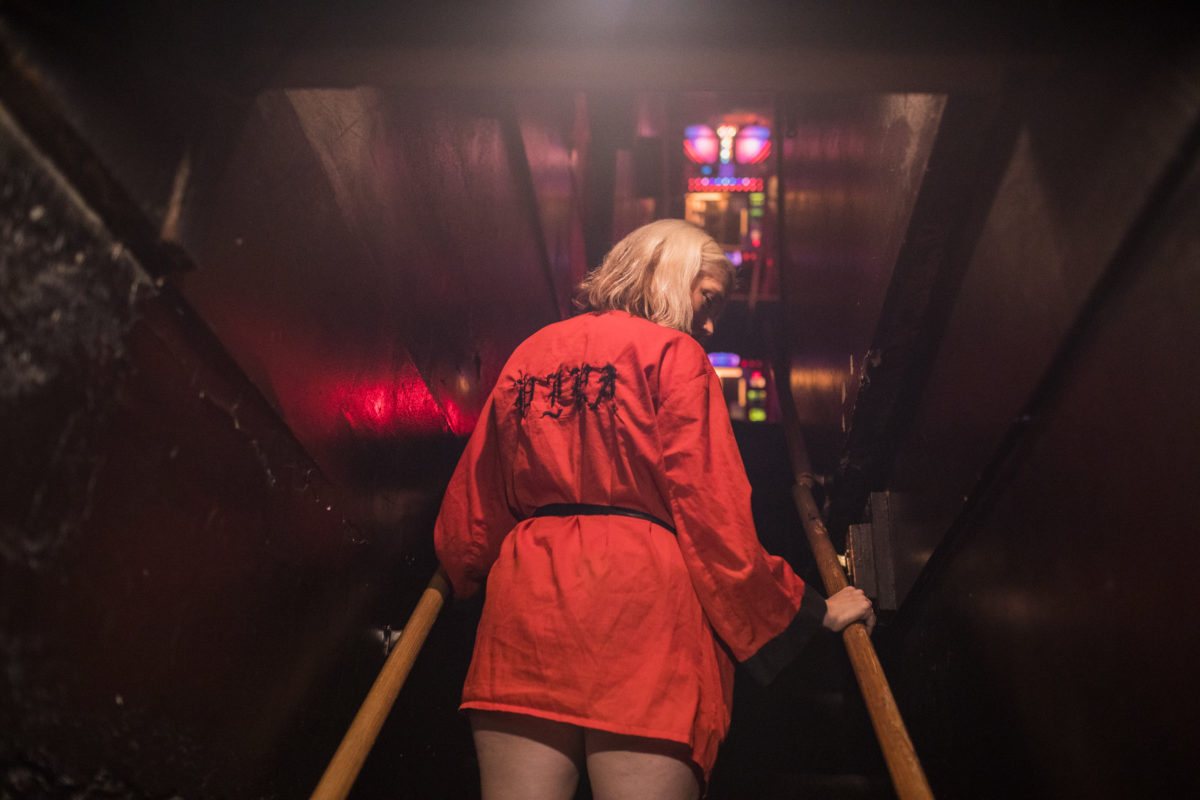 Viva prepping to go on stage at Mary's.

Portland’s sex industry also sets itself apart from the rest of the country, and perhaps the world, thanks to the city’s generally progressive values. Comparatively, Portland dancers enjoy a greater breadth of self-expression, working almost exclusively at small, neighborhood, “mom-n-pop” clubs, where they know the owners, they’re close with the other performers, and they’ve established relationships with their regulars.

For Here Magazine’s 11th issue, we met with four of Portland’s premier strippers to learn more about their experiences working in the City of Roses, and to find the friendliest (read: good for first-timers) neighborhood strip bars in Portland. For the best way to get (respectfully) up close and personal with true Portland culture, check out these six clubs, which have been lovingly hand-picked by our friends in the industry.

→Read all about the strippers keeping Portland weird. 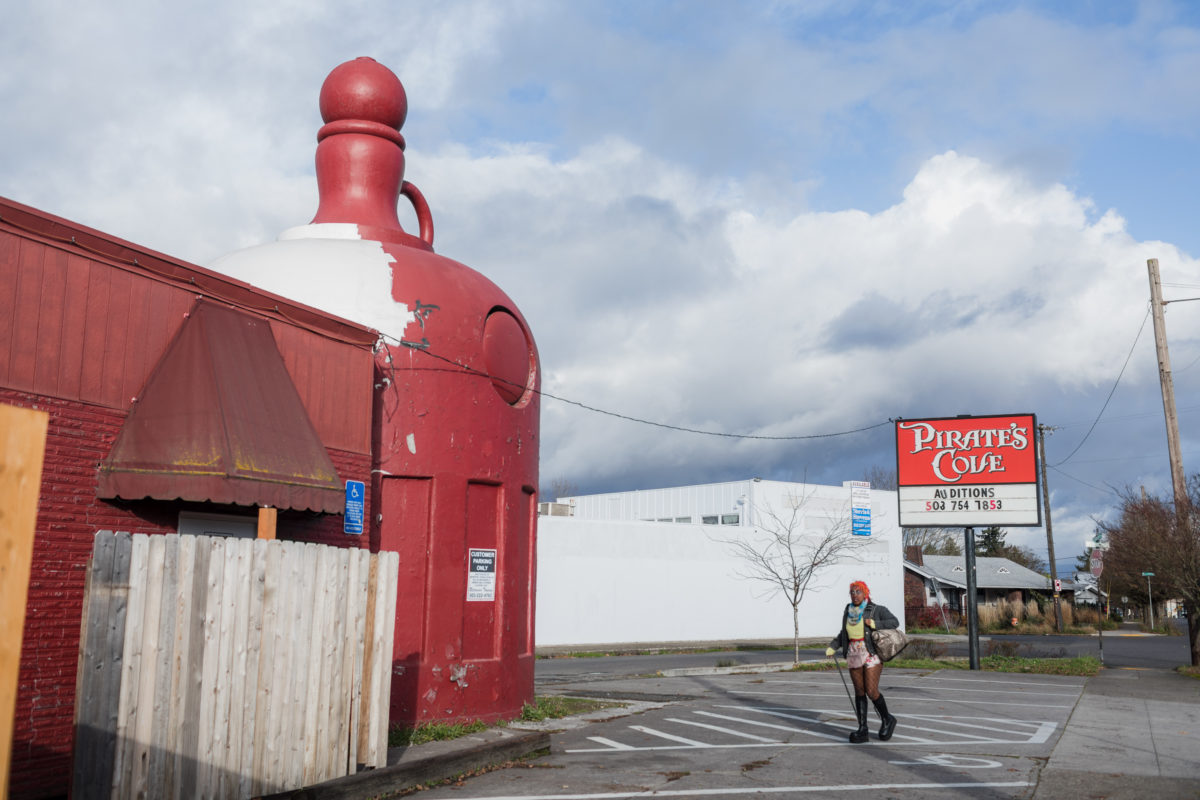 Cloud is a resident dancer at Pirate's Cove. 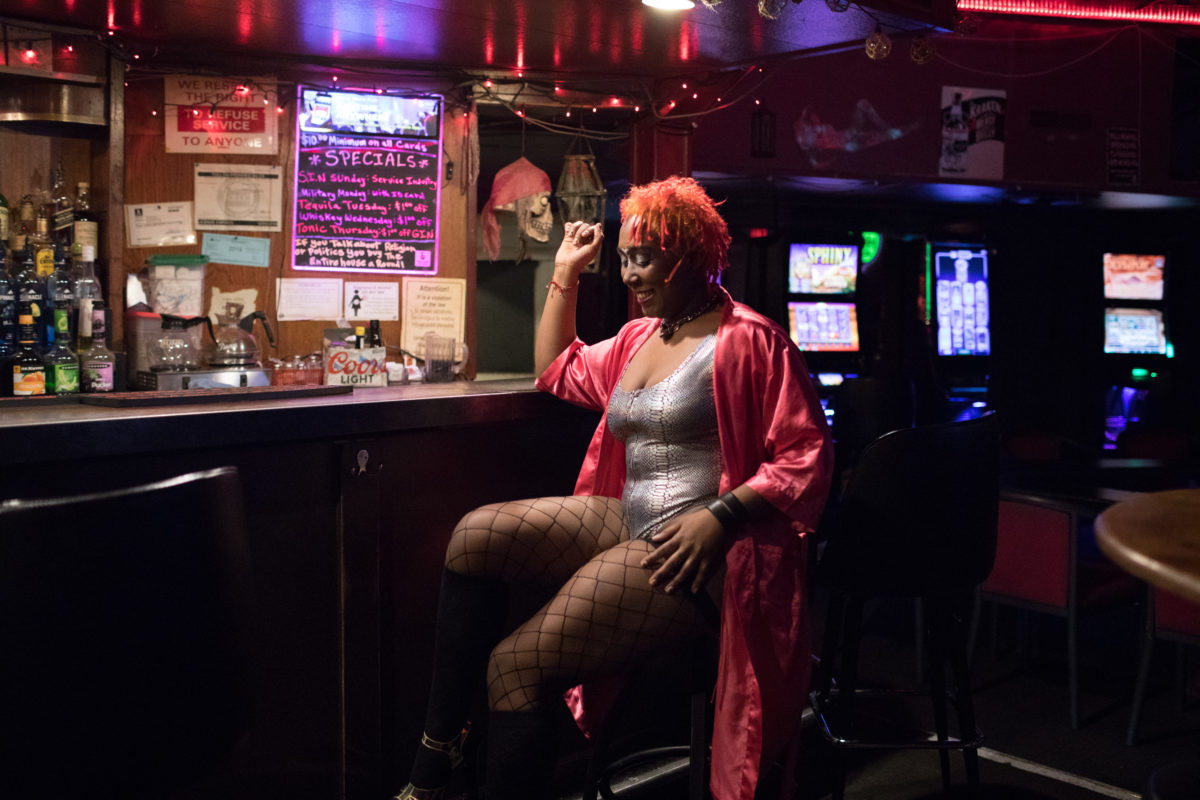 Cloud, who grew up in California, has always wanted to work as a stripper.

“Pirate’s Cove is kind of a staple in Portland,” says Cloud, a dancer here. “It’s not very popular in that it doesn’t get all of the attention, but it’s been in town for a long time. It’s one of those places where locals really dig it.” Not convinced? The giant sign outside the establishment has been known to say “We Care A Lot.” Who doesn’t love a neighborhood dive with heart?

Elle Stanger—a professional podcaster, Portland’s “Stripper Writer,” and a licensed sex educator—strips at Lucky Devil Lounge for 18 hours a week. “It’s a smaller, more intimate club with an outside covered patio and fireplace, large food menu, talented dancers, and a wide array of music from the obscure to Top 40,” she says. According to Stanger, Lucky Devil was one of the first clubs to introduce a poker game at the tables. “It’s like adult playland,” she says. Prepare to be entertained. 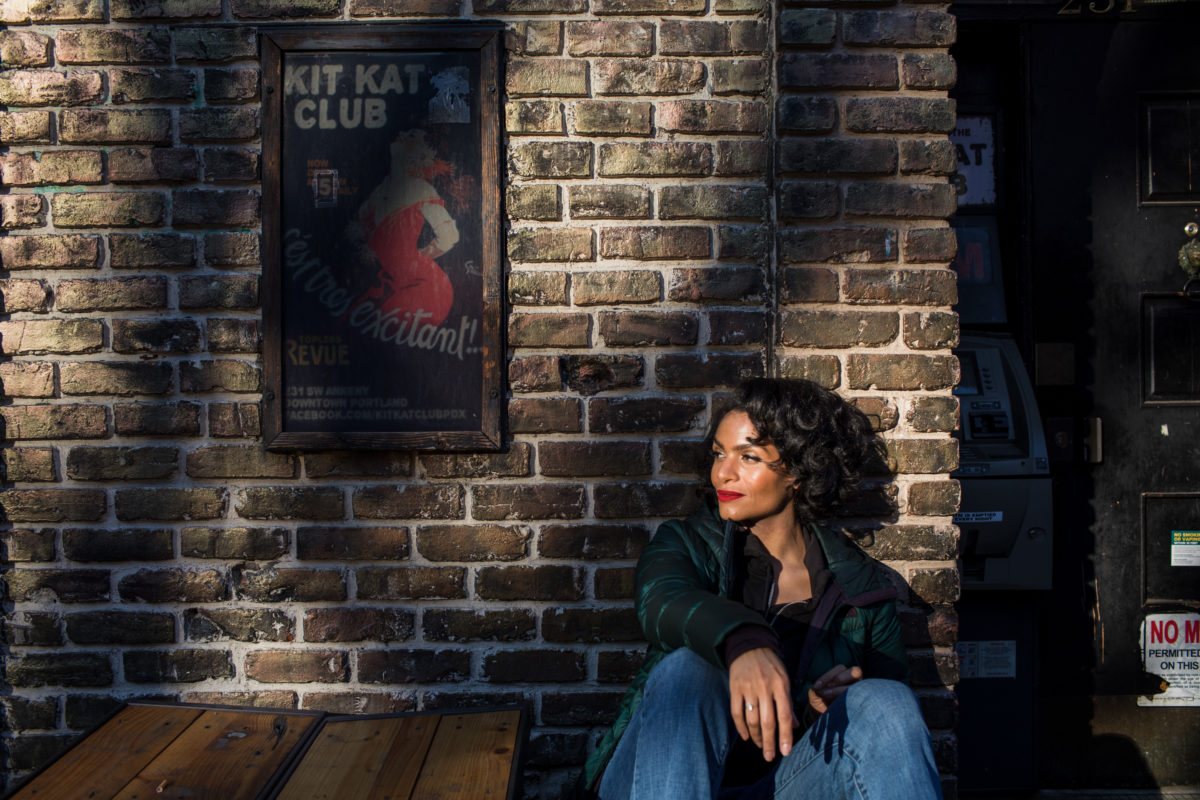 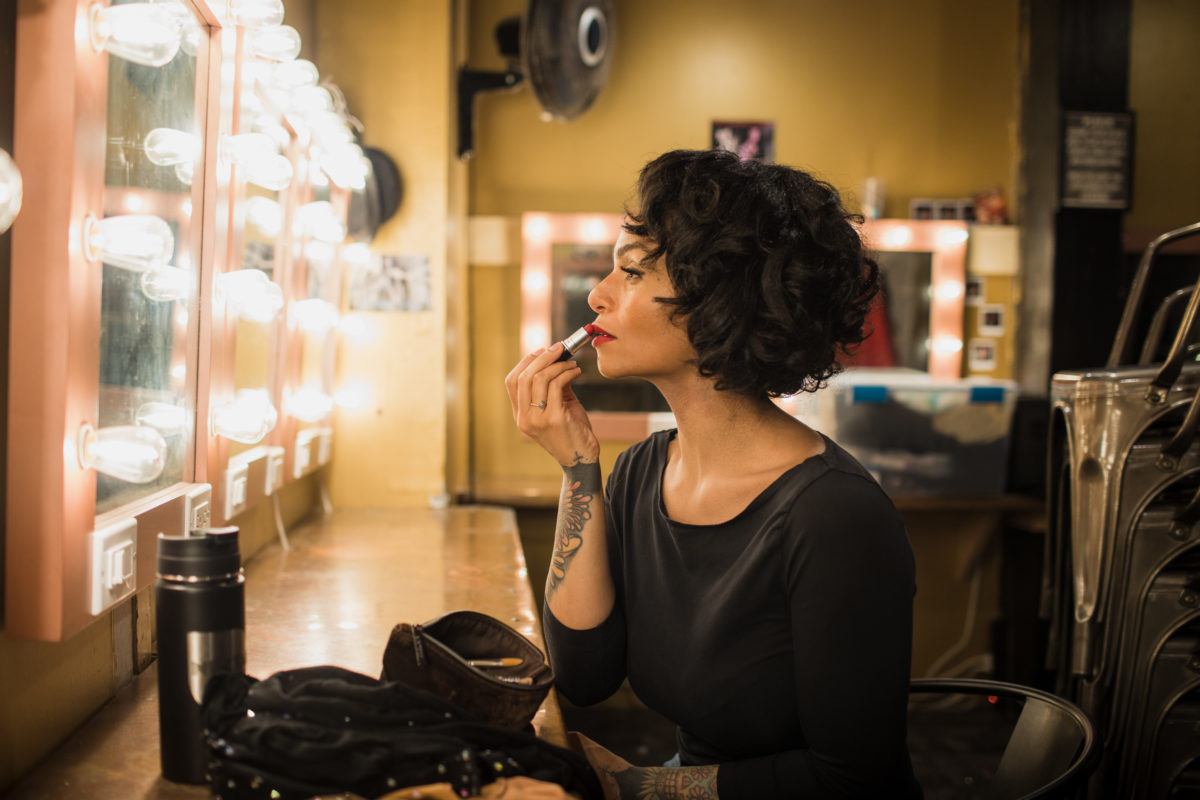 Prepping at the Kit Kat Club.

Stanger also recommends Hawthorne Strip, which has “friendly dancers and good drink specials,” and is “a good neighborhood strip club for locals and first timers.” They also have late-night Mexican food. 3532 SE Powell Blvd, Portland, OR 97202

The Kit Kat Club has many things, including hourly themed performances, very strong drinks, and the pleasure of presenting born-and-raised Portlander Sandria Doré, who performs here as Dria. “I will say that working at Kit Kat has been the best experience I’ve ever had [with a club],” she says. “Frank [Faillace, the owner,] is a pretty amazing person to work for. It’s a beautiful club.” Come here to catch some burlesque. 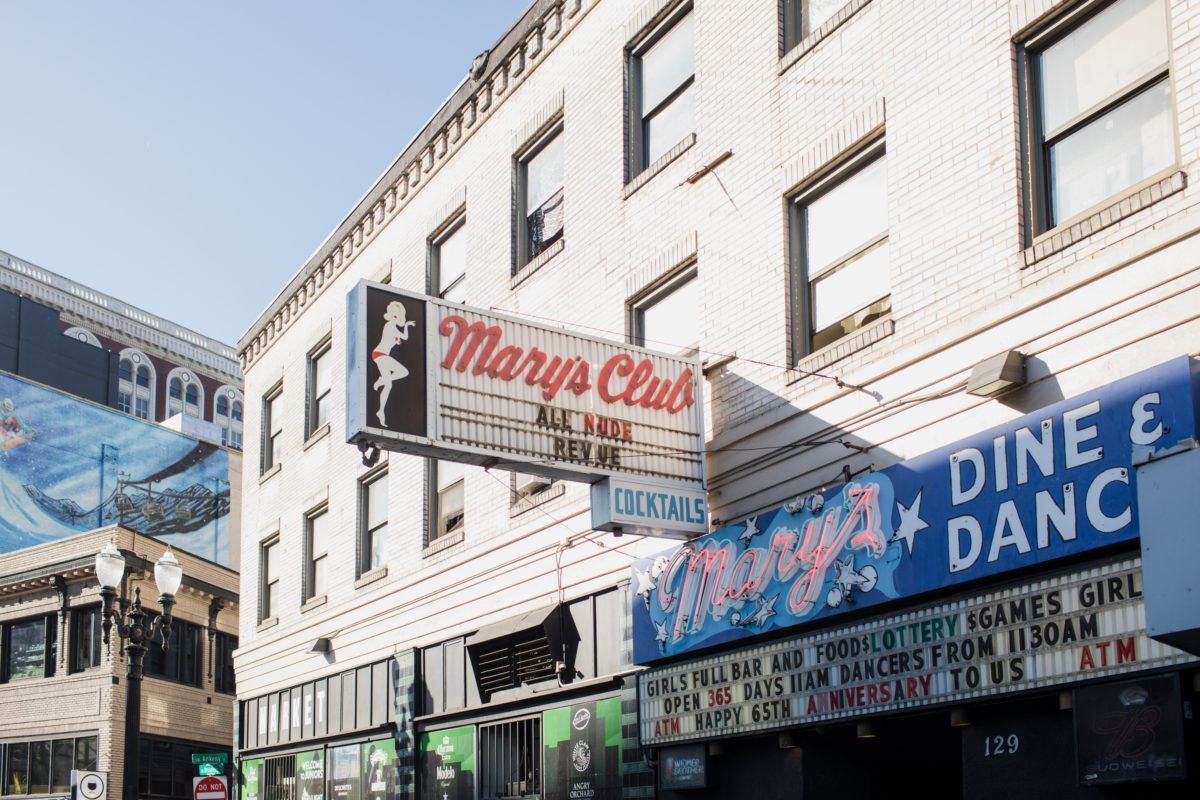 Mary's Club is Portland's oldest strip bar and the only one owned by women. 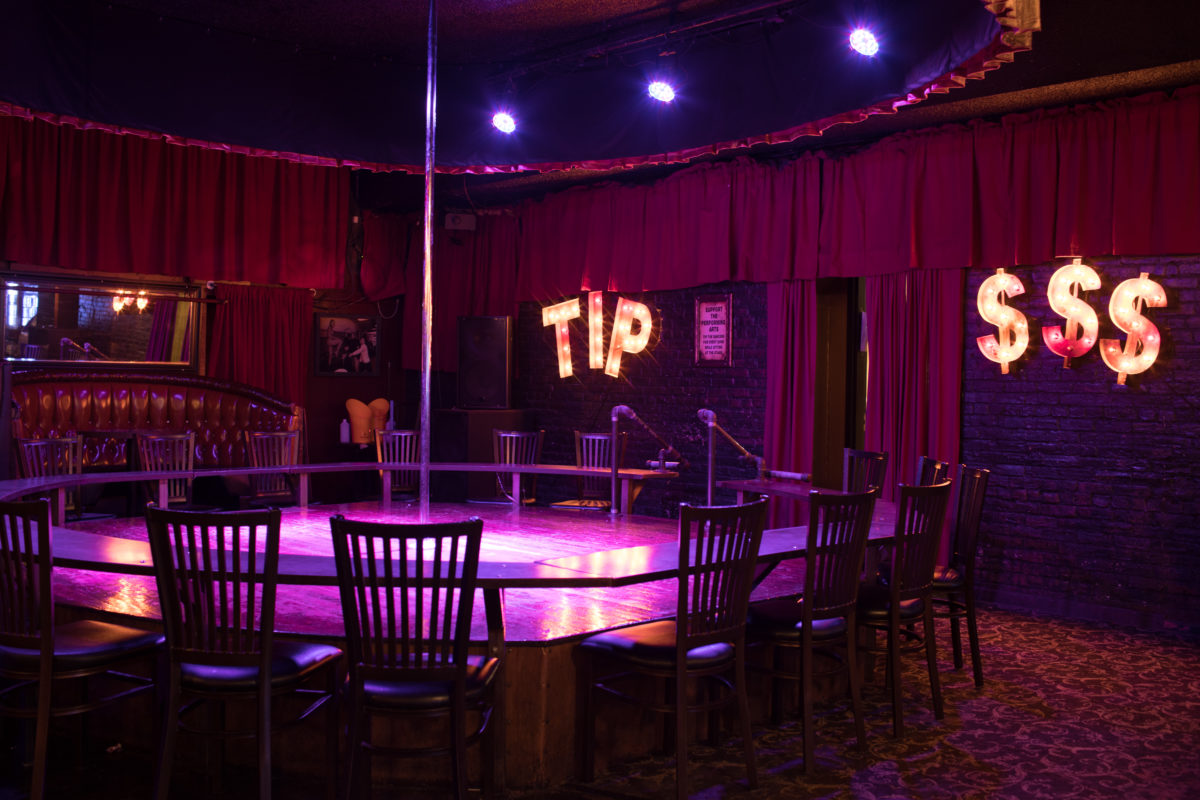 Inside the Kit Kat Club.

Mary’s Club is a Portland institution, the only club currently owned by a woman, and the oldest club in the city. Dria, who used to dance here, still sings its praises. “People at the company picnic were regulars at the bar, and everybody got to meet each other’s kids and family members. It wasn’t so much like a turn-and-burn experience of, like, a club in Vegas where it’s just constant tourism.” Plus, Viva has been dancing at Mary’s for the last 20 years, so they must be doing something right. Expect divey vibes, complete with a friendly bartender, immensely talented dancers, and a variety of bops on the loudspeaker.

This club is famous for one thing: Stripperaoke. According to Stanger, dancers at Devils Point provide props as well as costuming, and “like, tubs and containers of labeled gear for this,” she says. “They take it very, very seriously. And I think that’s awesome. That’s showmanship right there.” Plus, Willamette Weekly voted it Portland’s best strip club in 2019.