Three New York City-based performers—Broadway star Isaac Cole Powell, New York Ballet principal dancer Tiler Peck, and RuPaul’s Drag Race contestant Miz Cracker—tell us about the essentials they take with them on the road and the emotions they hope to inspire wherever they go.

Travelers and performers are kindred spirits. Their lives are equally unpredictable: The traveler, no matter how many guidebooks they study, can never truly know what awaits them in a new place; the performer, no matter how intensely they rehearse, knows that anything can happen during a live performance.

In both cases, the exploration of self demands a level of vulnerability that normal circumstances—whether back at home or beyond the fourth wall—do not. Driven by a shared desire for self-discovery, performer and traveler alike must trust enough in their wits, instincts, and passion to believe their risks will lead to reward.

Like those who take to the skies in pursuit of new perspectives, the following three entertainers pack their bags in anticipation of taking to stages all over the world, where they will challenge themselves—and their audiences—to discover something new around every corner. 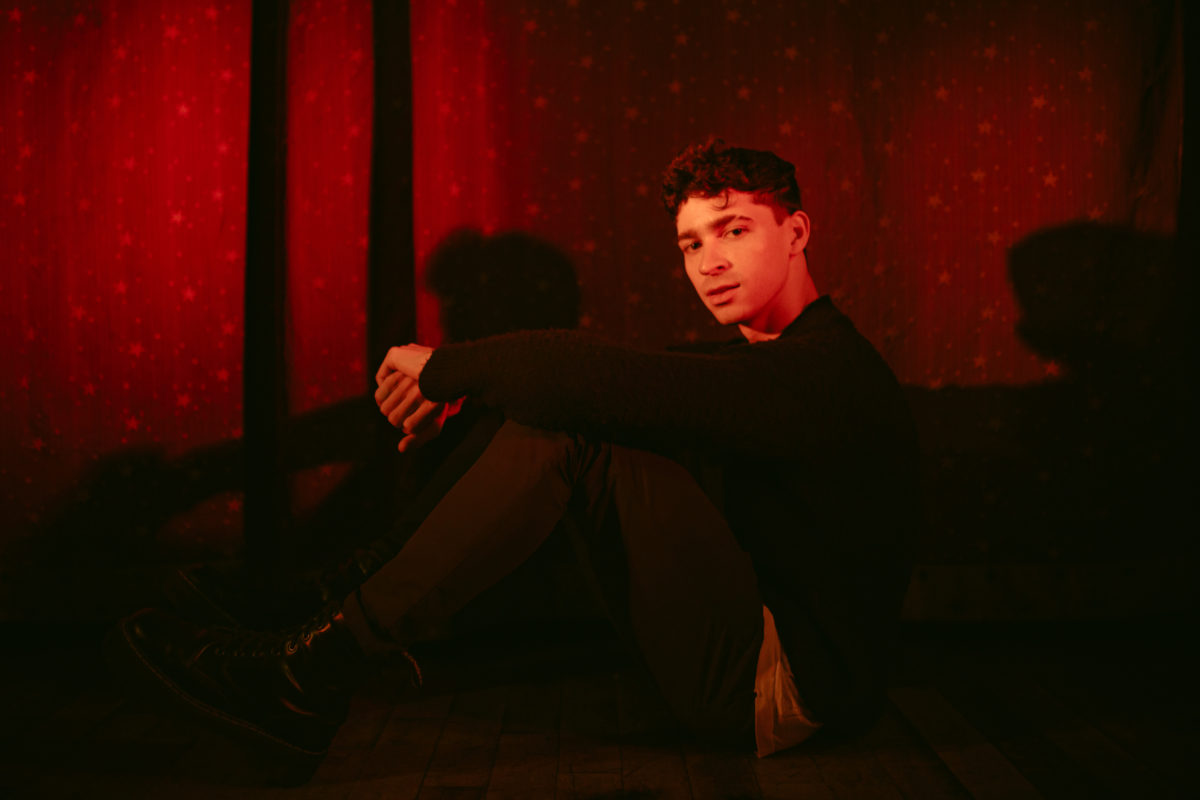 Isaac Cole Powell is the poster child for transforming small town aspirations into big city dreams. “I always felt kind of invisible growing up mixed and gay in the South. They were these two parts of my identity that most of the time went unseen or were confusing to people, these things that people didn’t quite understand,” Powell says. “But I could stand on a stage and nobody was asking any of those questions because they were lost in my performance or my character. And that was a really affirming experience for me—just to be seen and be heard.”

Powell, who was born and raised in Greensboro, North Carolina, currently stars as Tony in Broadway’s latest revival of West Side Story, which opened in early 2020. 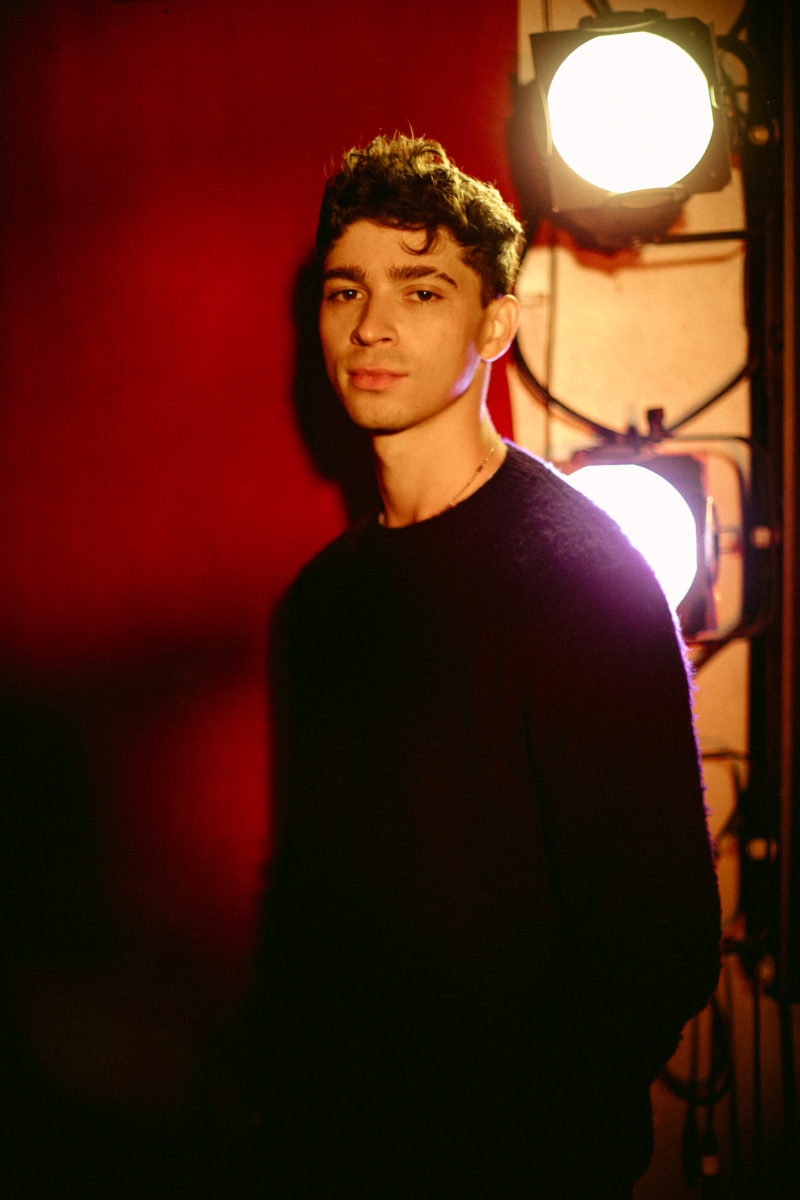 “I love to be in new places, and theater is a little bit different everywhere you go.” 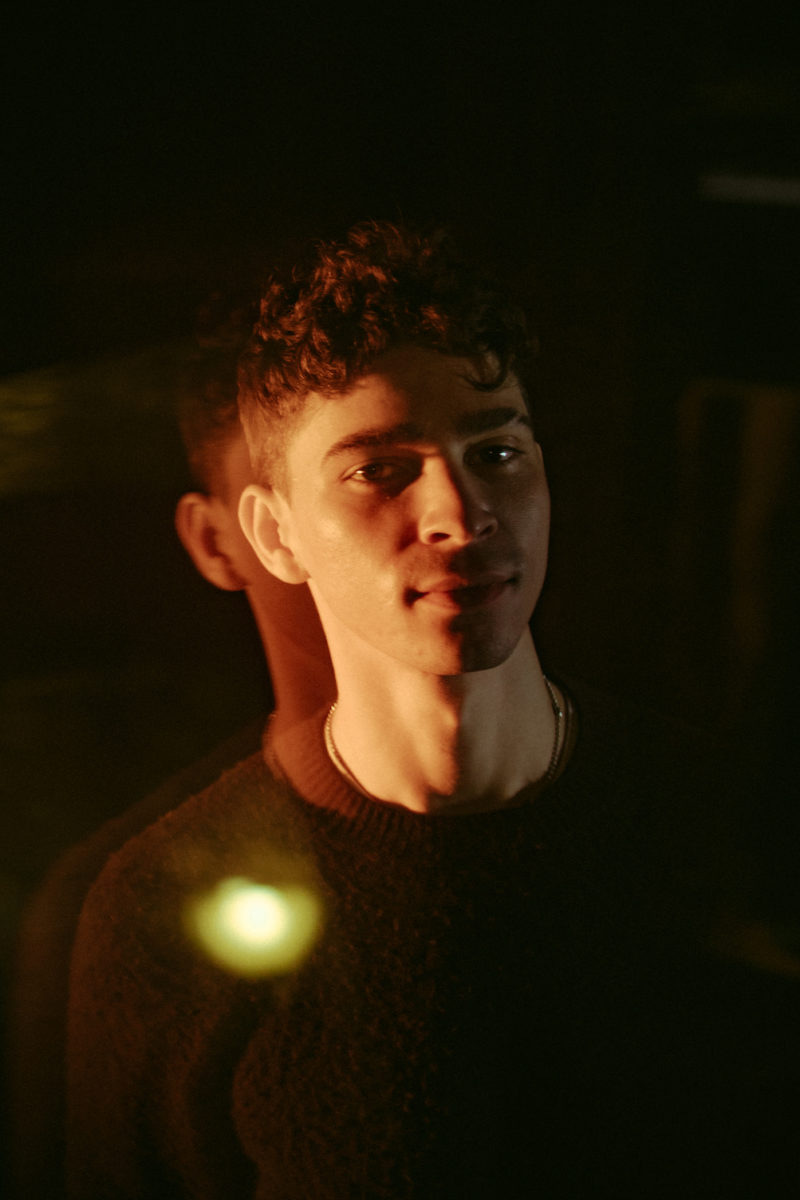 Powell comes from humble beginnings; his first ever role was as a munchkin in his local theatre's production of The Wizard of Oz.

Family friends convinced him to audition for the local theater when he was still young—Powell’s first role was as a munchkin in The Wizard of Oz. As he got older, he continued to cultivate his talent, attending both performing arts high school and college. He booked his first Broadway lead just two months out of undergrad.

“I always feel like I’m the main character in my own movie, leaving my past behind me and heading towards the future.“

Now 24, Powell’s spent the last several years in New York, working in one of its most intense industries. Still, he exudes a sensitivity and softness that the concrete jungle has yet to corrupt.

“There’s something about traveling solo,” Powell says. “I always cry. I don’t know why. I always feel like I’m the main character in my own movie, leaving my past behind me and heading towards the future. That sounds lame. Oh, my god,”  he adds, laughing. 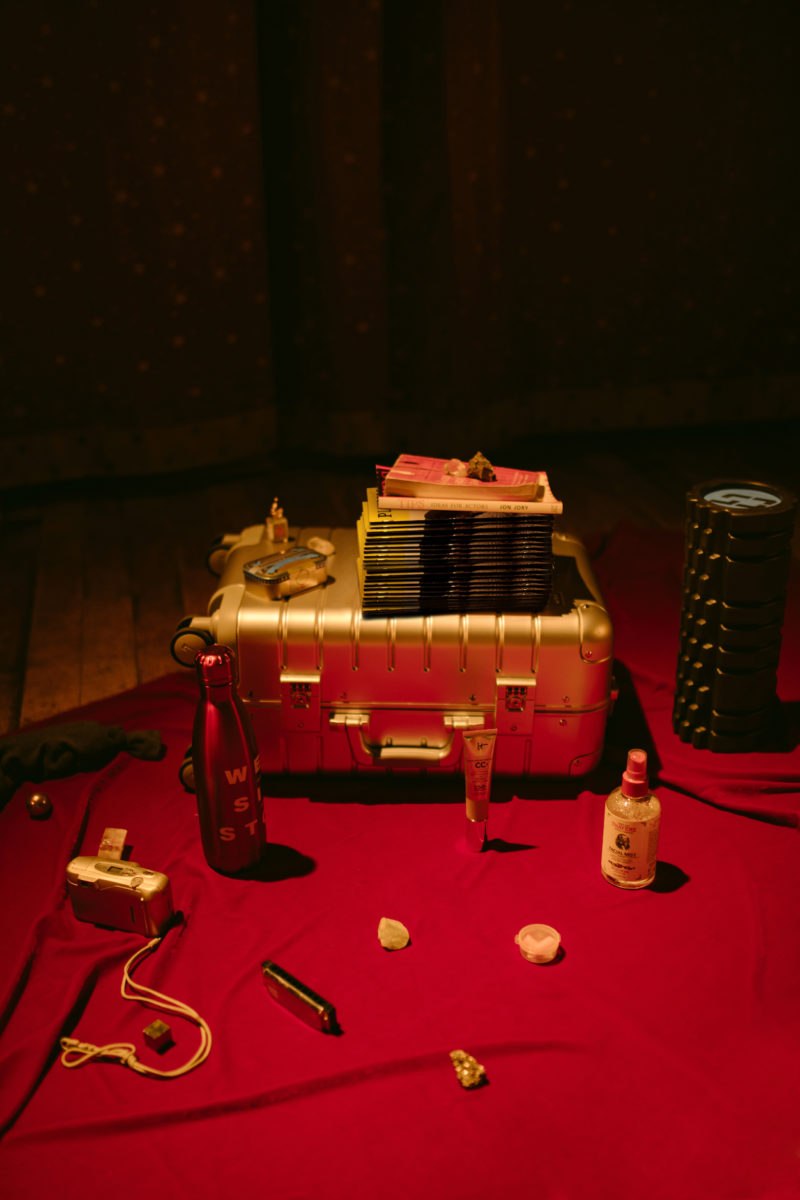 Solo travel has an emotional power that never fails to move Powell. "I always cry. I don’t know why." 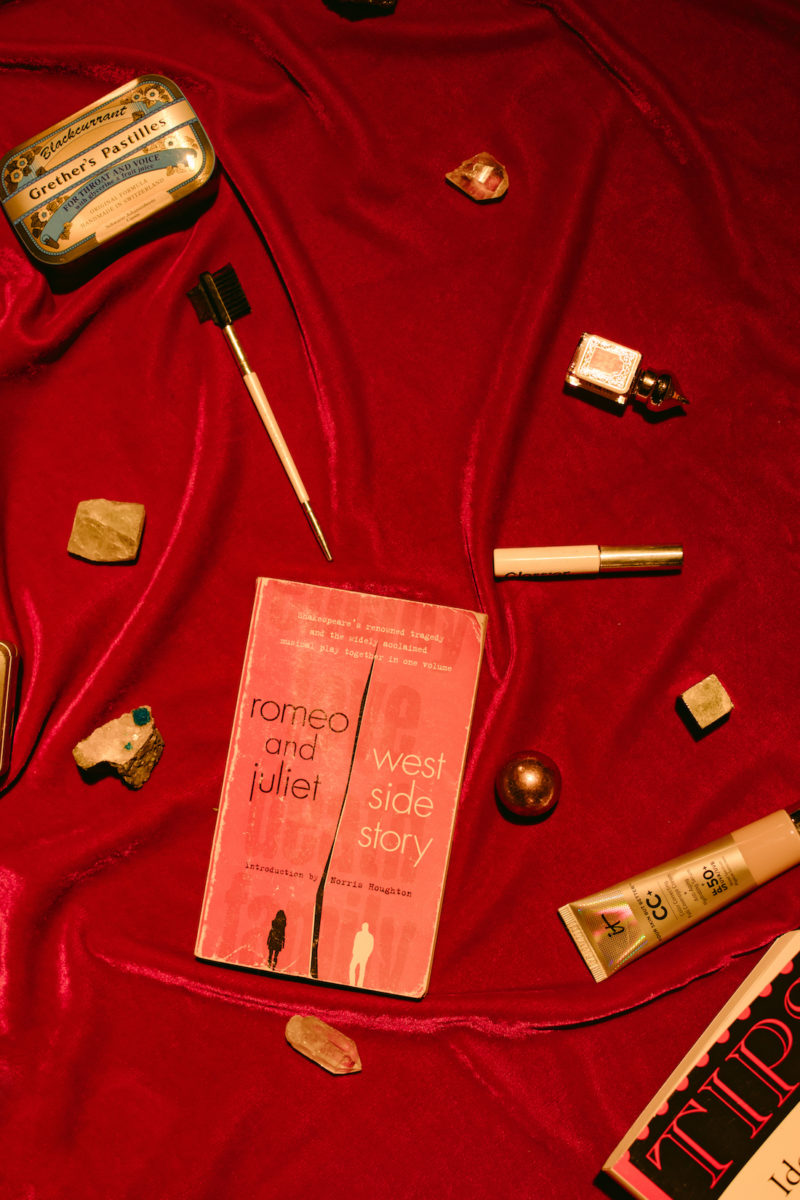 Always inside Powell's suitcase: well-read scripts and lozenges for throat and voice.

Mere months after graduating in 2017, Powell got the callback for the role of Daniel in Once on This Island. He still remembers the train ride from the Adirondacks, where he was working at the time, down to New York City to audition for that role, which would become his big break.

“I was reading the script and I got a little emotional, and the lady next to me asked if I was okay. And I was like, ‘It’s just that the character in the play is mixed, and I’m mixed, and I never get to play mixed people, and this would be really cool!’ And she’s like, ‘Oh, I didn’t mean to open up that can of worms.’”

But every tear shed from stress, nerves, excitement, or dramatics is a burden the actor is proud and eternally grateful to bear. Because although the stage transforms him into another person each night, it was the first place he felt he could be entirely himself. 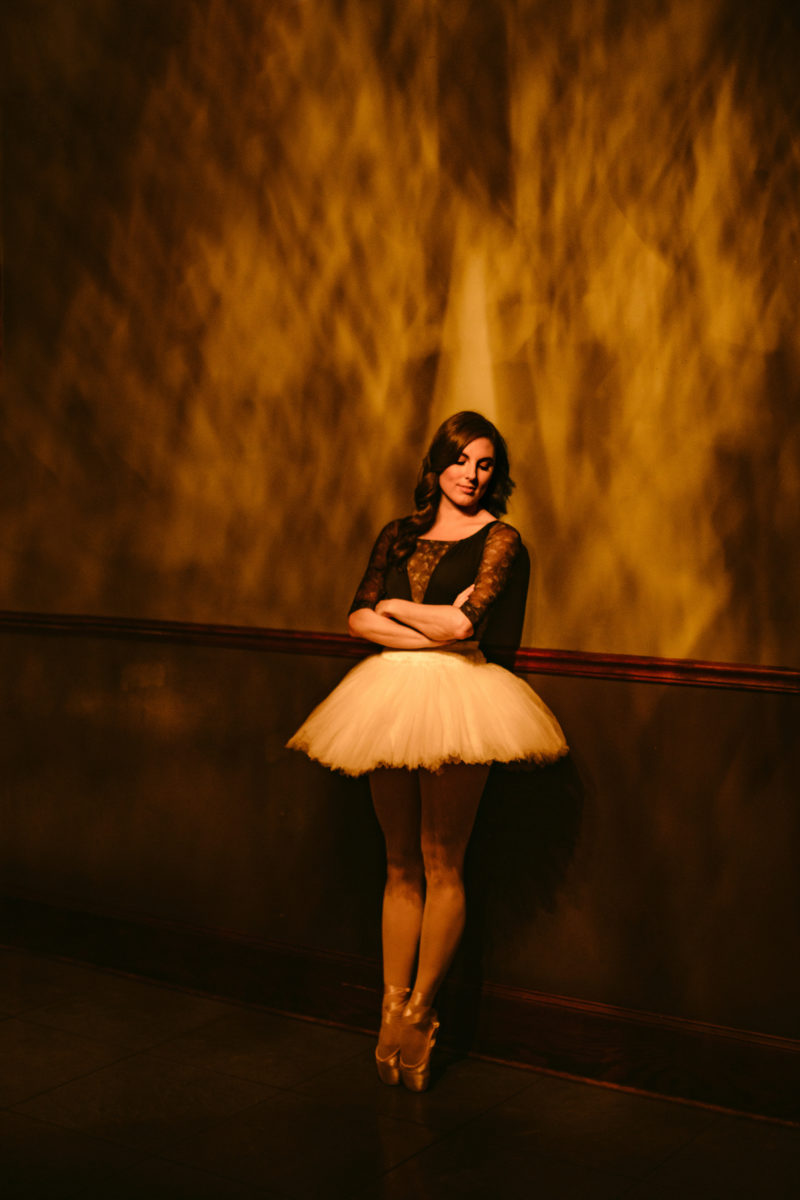 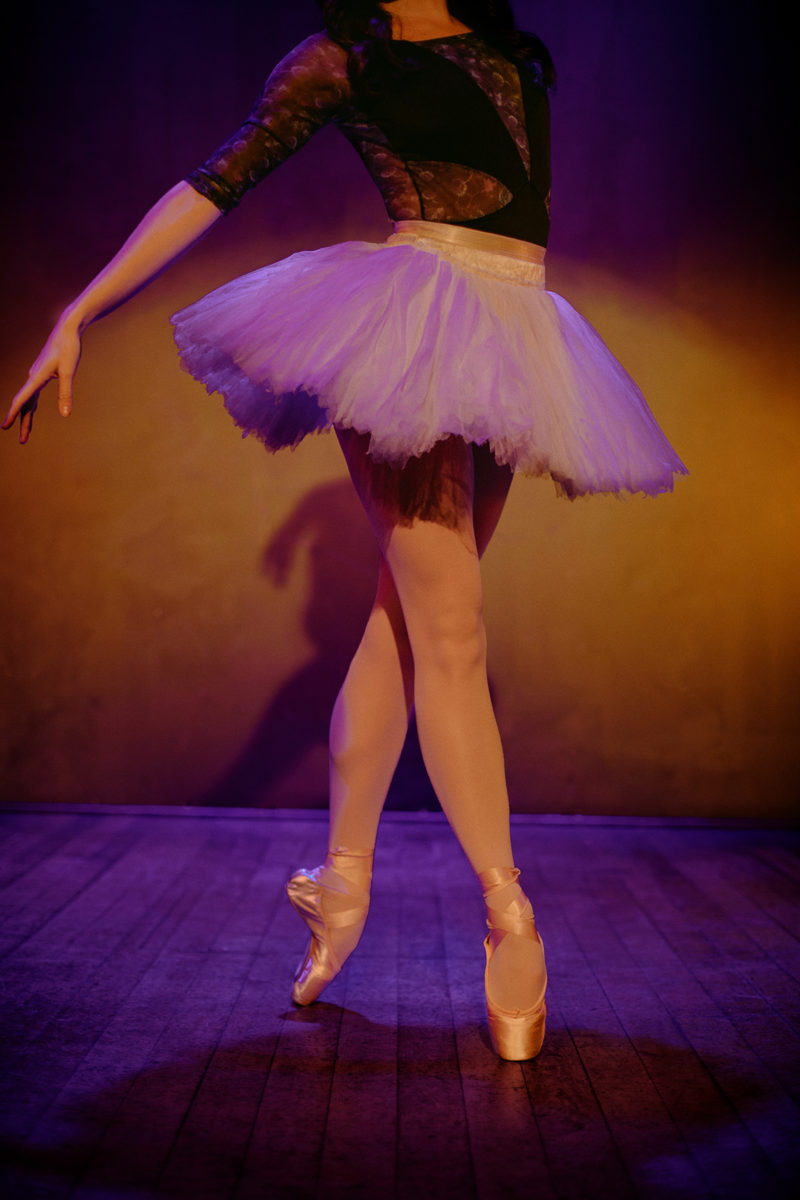 “The great thing about a live performance is that it’s different every single night,” says New York City Ballet principal dancer Tiler Peck. To her, the journey across the stage, no matter how practiced, is always dependent on chance; a single misstep and the cadence of the dance could be thrown off entirely.

“The distance of the stage, or whether you’re going to fit in ten chaînés or just six—it’s different depending on the tempo, on how you’re feeling. It’s exciting to me, playing with the music and space and making it fit in the dance.”

More often than not, Peck sticks her landing—and, much like her initial move from Bakersfield, California, to New York City as a teenager, the risk almost always proves worth taking. 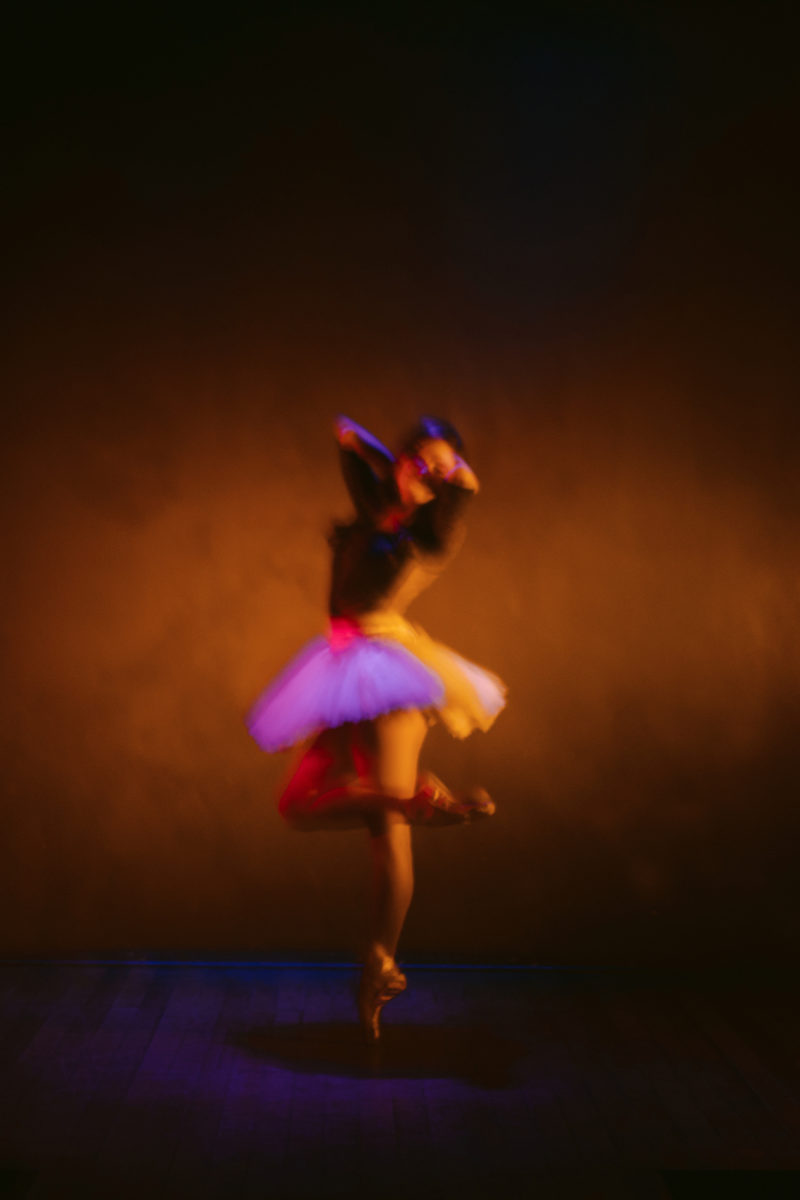 To stay on top of her game, Peck trains up to 12 hours a day. 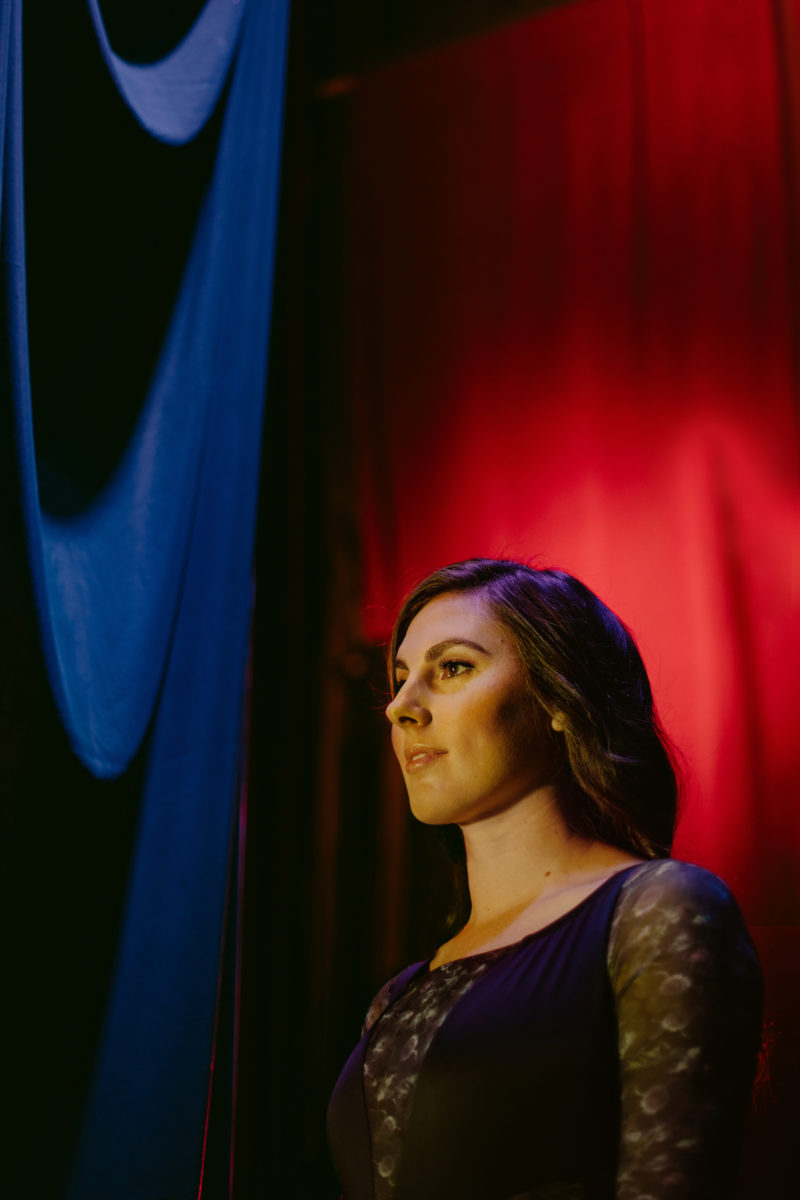 “I never expected at 15 to be swept up into the New York City Ballet,” she admits. But after years of rehearsals and training at home in California, she eventually made the difficult decision to leave in pursuit of her passion—and did so at an age when most kids are just learning to drive. “The chance just happened fast and my career kind of chose me.”

“Once you get on stage, you just kind of let go; you learn all these things so that you can then forget them.”

Moving away from California proved to be the first of many unexpected journeys for Peck, as dance would soon take her around the world.

“My favorite stage is Taormina in Sicily, Italy,” she shares. “The water’s the backdrop to the stage, and there’s a volcano in the background. The first time I saw it, I was like, ‘What? I actually get to dance on that stage?’” 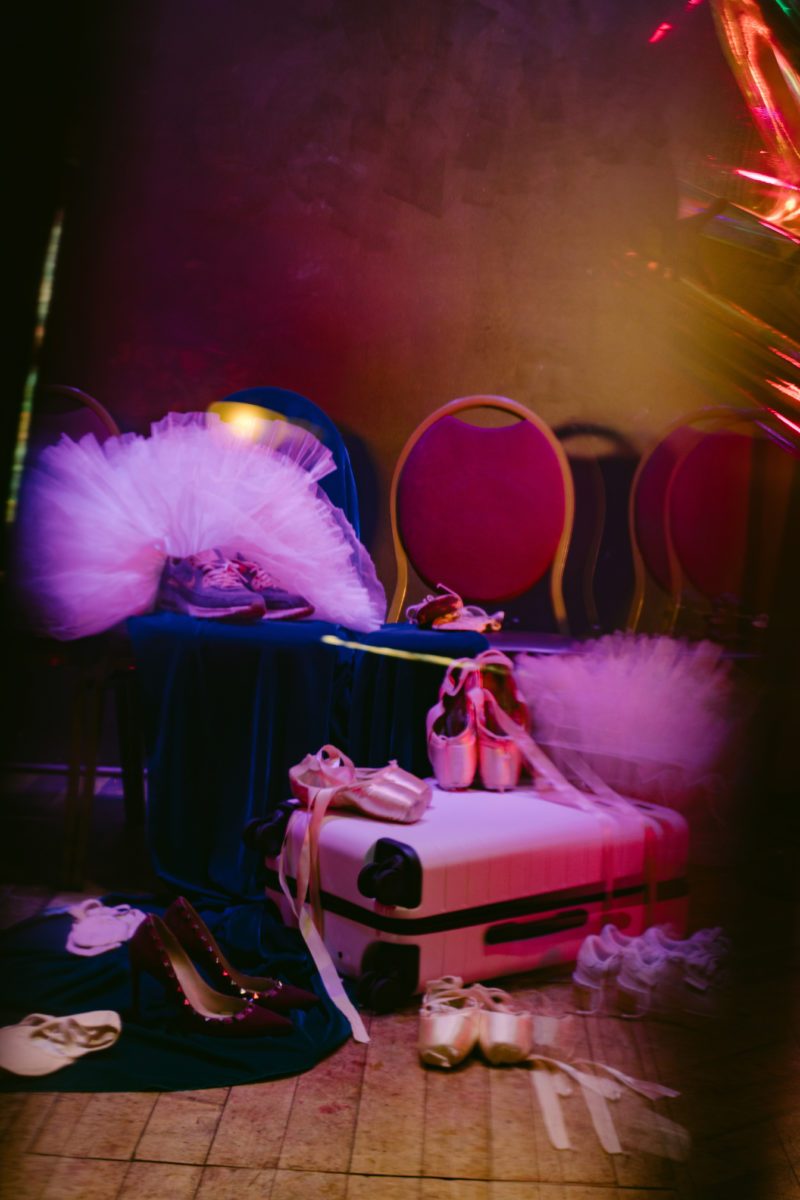 “Half the suitcase is for dance stuff, half is for life.” 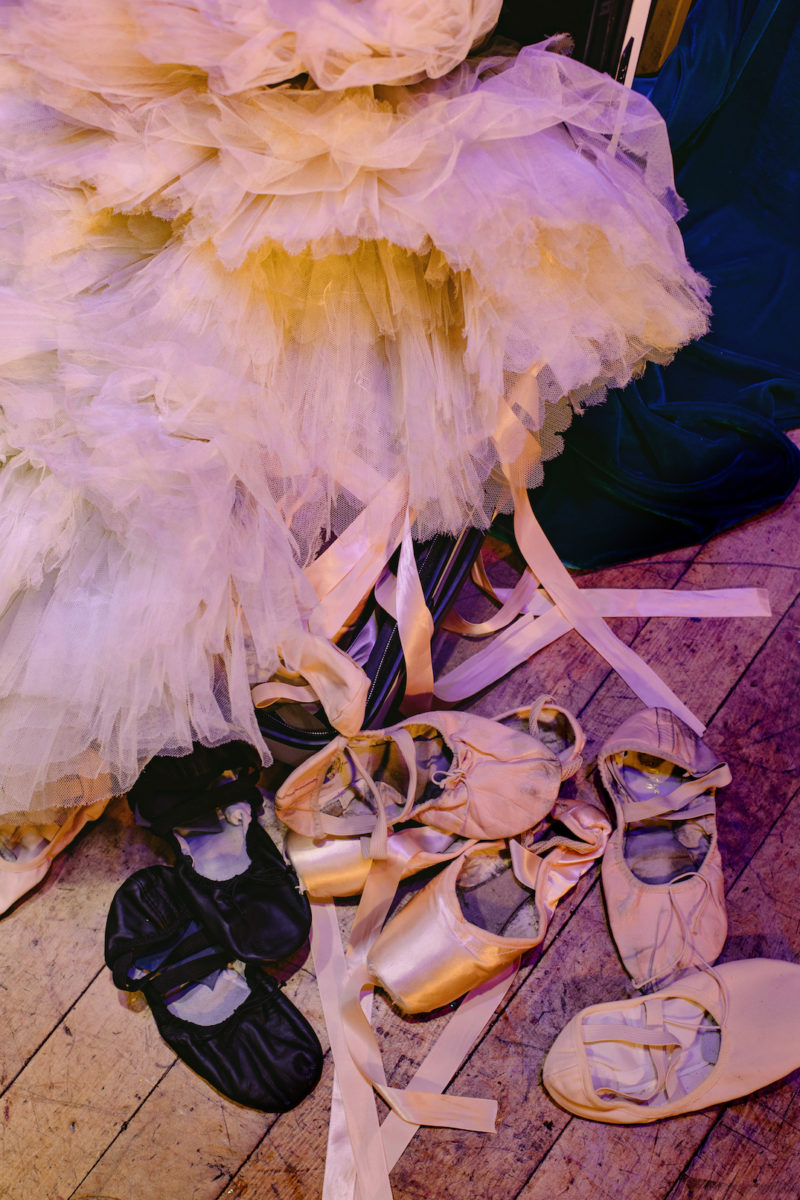 “I sometimes have to pack like 20 pairs of pointe shoes. If you have seven performances, you wear seven pairs of shoes.” 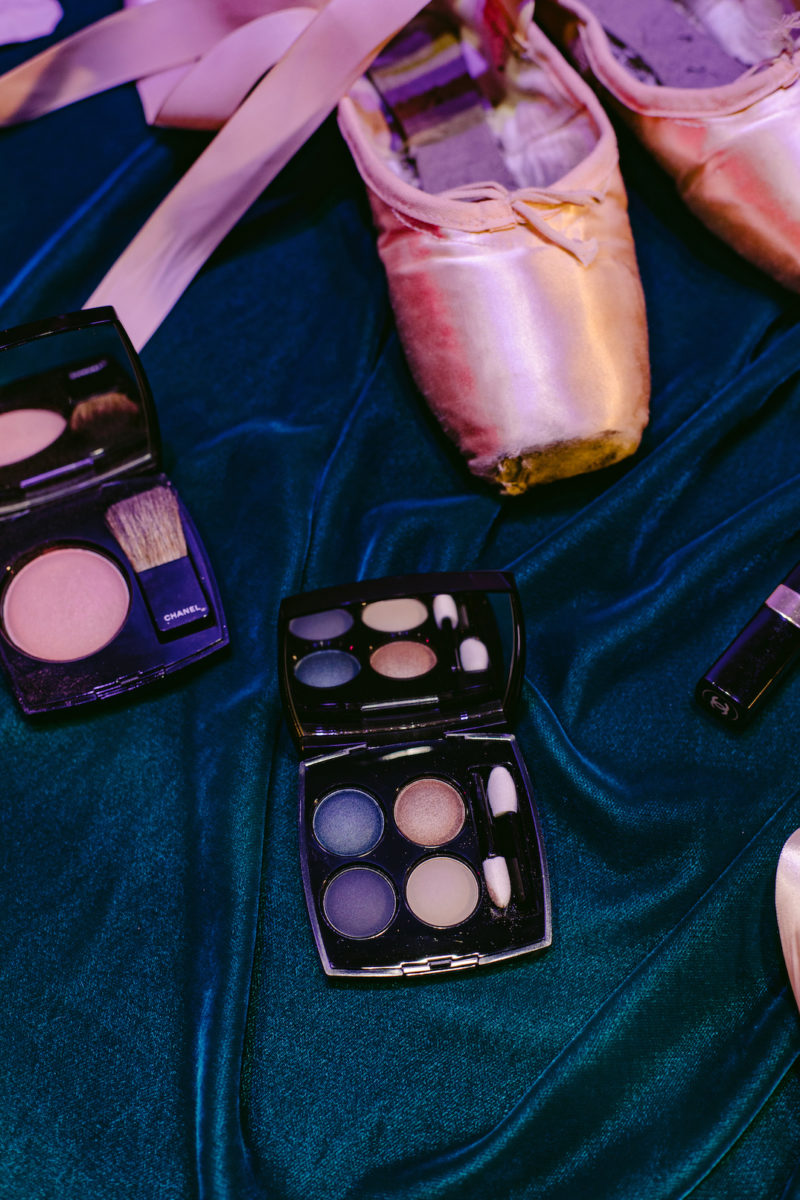 “Stage makeup takes up so much space. We wear so much.”

But as her dance career has grown, so has Peck’s hunger for additional challenges. On top of intensive dance training—sometimes 12 hours a day—she helms a dance-gear design studio (Tiler Peck Designs) and is set to release Katarina Ballerina, a series of children’s books about a young dancer’s efforts to conquer her own insecurities and join the New York City Ballet.

But ultimately, dancing remains Peck’s focus and her main outlet of expression.

“Once you get on stage, you just kind of let go; you learn all these things so that you can then forget them,” she says. “The training is what you fall back on, but what people want to see is not the work. You lay the foundation, and everybody else just wants to feel something.” It’s that thrill—of navigating new stages, both in ballet and in life—that Peck really feels, and it’s what keeps her coming back for every performance. 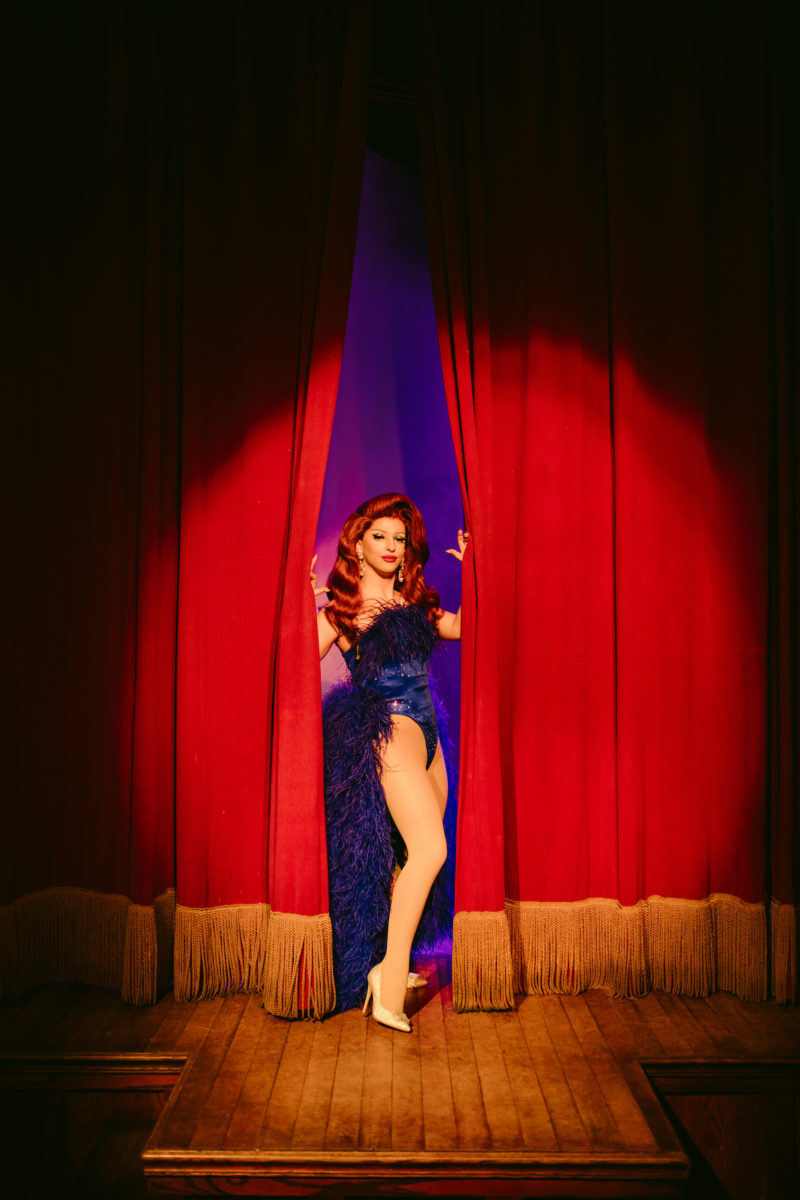 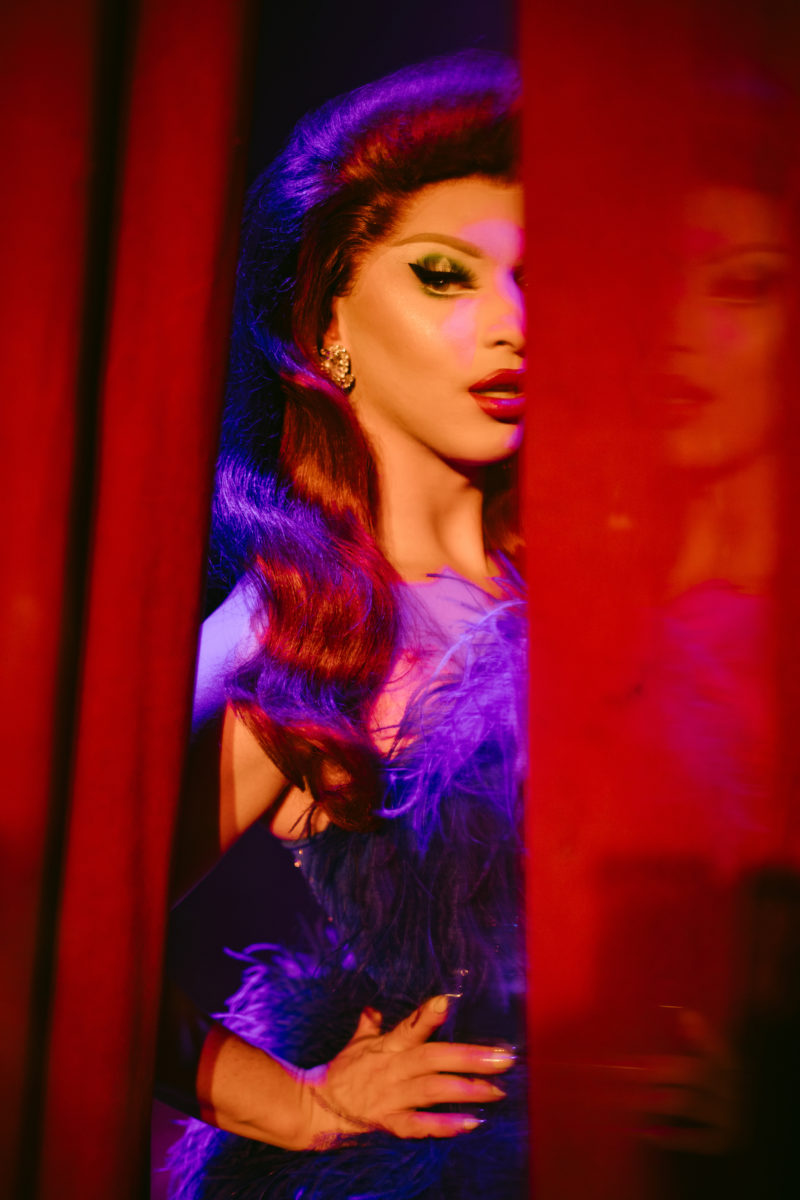 Before Drag Race, she'd only performed a handful of times in New York and Seattle; now, she hits international stages every week.

“It’s true that the road is my home,” says drag superstar Miz Cracker. The Seattle-born, New York-based drag queen got her big break filming the 10th season of RuPaul’s Drag Race in L.A., but she is a woman of the world—and has been for quite some time.

Prior to her TV debut, she’d only performed a handful of times in a handful of cities, and certainly not internationally. Once a grant writer at a Seattle museum, her first ventures out of the country took her to Senegal, where the art, food, and culture captured her attention.

“I was there for a month each year for around three or four years,” she says. “They taught me Wolof there. I came back to the States and met with Senegalese nationals and taught them English and French in exchange for more Wolof lessons.” 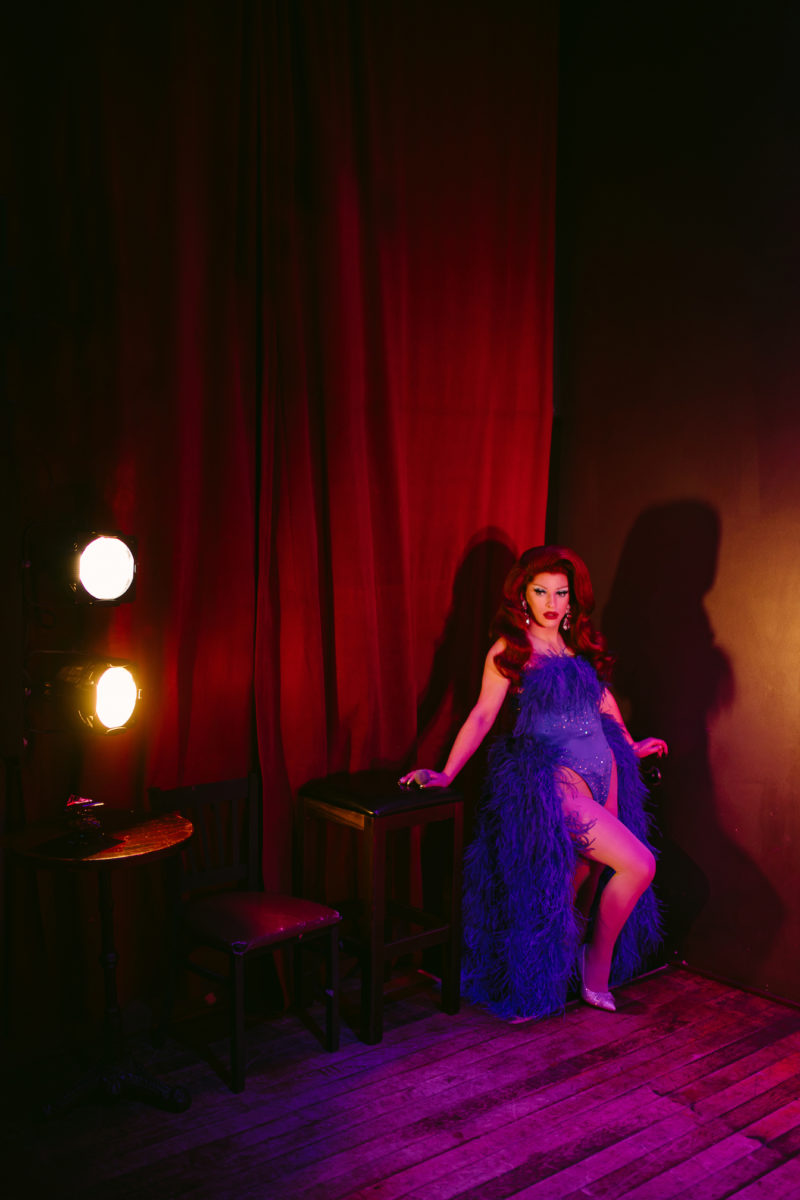 “When I go to a designer, I give them an outfit that I want and show them the image and say, ‘Make this, and also make it packable.’ As soon as I pick it up, it’s in a bag and then it goes in the suitcase that’s been waiting for it.” 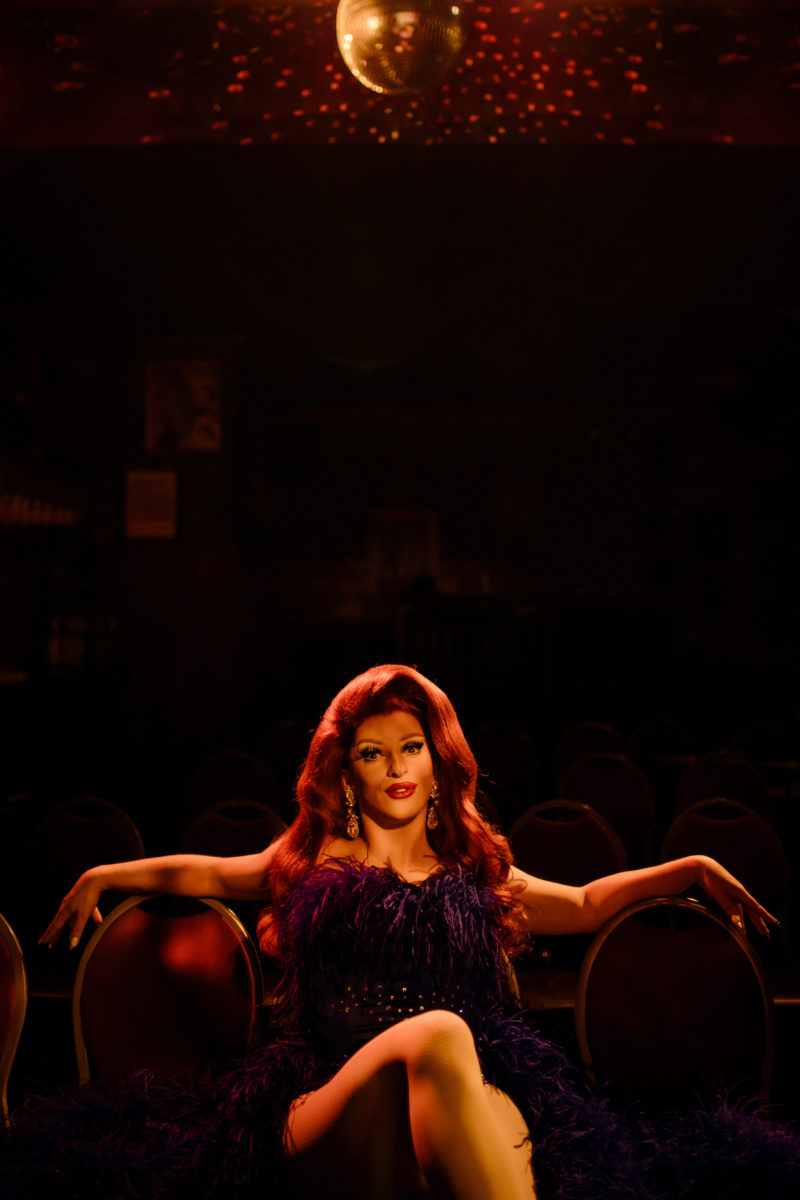 “I almost never think about makeup because I hate thinking about it. It’s the least important part of drag to me.” 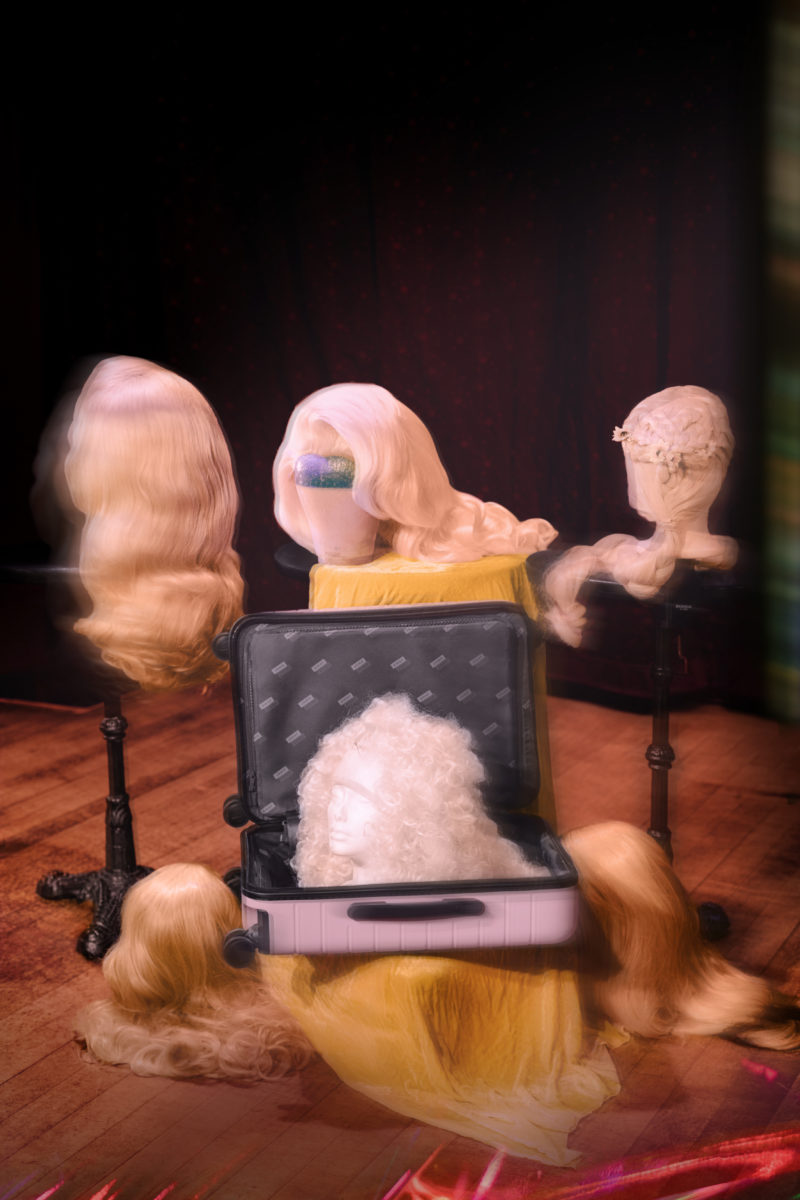 “I’ll bring two prepared wigs, but then I’ll bring ten or a dozen unstyled wigs so that I can have an idea on the road and make it happen.”

Now, Miz Cracker still spends most of the year traveling—but she focuses on her own art and how it can change the world. Her latest international excursion, titled “American Woman,” will take her overseas to share her experiences—many of them troubling—from back at home.

For Miz Cracker, drag is about more than singing, acting, and putting on a great show—it’s about impact.

“My shows and my performances and what I wear—that is where my politics live. And I think that’s how it should be,” she adds. “Your politics should walk around with you and your body.”

Miz Cracker’s personality and whimsy shine through in every performance. “Drag brings a sense of wonder to the world. That’s the best part; that’s the heart of it,” she concludes. “I love connecting with fans and people who have never seen drag out in the real world. People are on their way to work and get to see something that they didn’t expect to see. They go, ‘What’s happening? Is there a party?’ And I’m like, no. It’s just Monday morning. But it feels like there is.”

A version of this article appeared in issue 11 of Here Magazine. Lighting tech: Orlando Rueda. Location: The Slipper Room.