Get Ready to Visit Mumbai From the Comfort of Your Home

Explore Mumbai, India, from home with our virtual travel guide to the city’s most iconic recipes, online experiences, books, movies, and social accounts to know.

When people ask me where I’m from, my first answer is “Bombay.” Then, I quickly correct myself and say “Mumbai”—Bombay was what the city was called when I was born here; it was officially renamed Mumbai in 1995. Name changes are just one part of the city’s fascinating history, which dates back thousands of years.

Located on India’s western coast, the areas in and around Mumbai have seen some form of human habitation for at least the last 10,000-15,000 years.

Mumbai has evolved from a fishing hamlet to a colonial outpost to an important trading center and financial capital. People from all over India come here to better their lives, transforming the city into a microcosm of the country. The mish-mash of inhabitants and influences, past and present, has resulted in a city of contrasts. It’s home to the world’s most expensive house and Asia’s largest slum; to centuries-old Buddhist religious caves and staggeringly beautiful Victorian Gothic structures; to dense concrete jungles and lush natural wildernesses (in the heart of Mumbai) where leopards roam even today.

The sights, sounds, and smells can seem a little overwhelming—but we’ve got you. Start your journey at home with our guide to the best recipes, online experiences, and selected books and movies inspired by Mumbai. 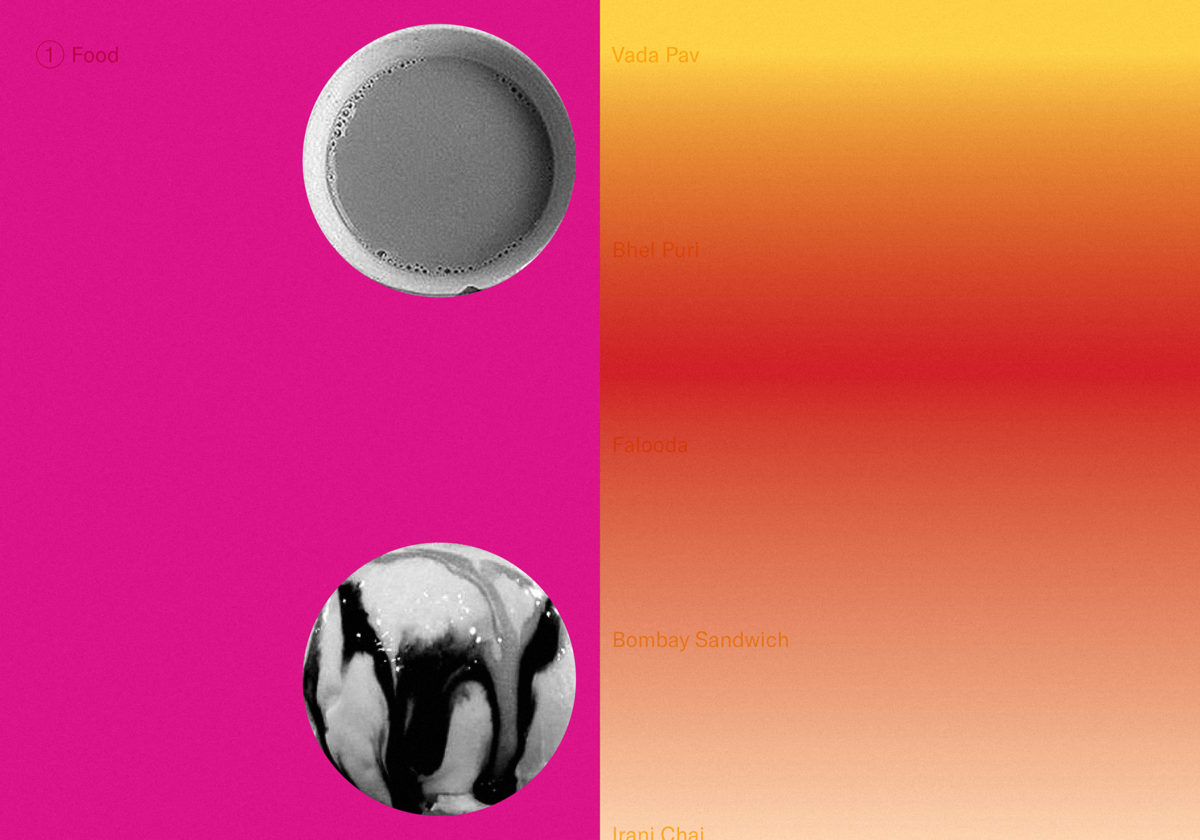 The vada pav, described by many as sort of an Indian burger, is the quintessential Mumbai street food: delicious, easy to eat and quick to consume. It consists of a vada, a fried potato patty seasoned with spices and chillies, sandwiched between a pav, arguably the city’s favorite kind of bread and a remnant of its Portuguese past.  A fiery red garlic powder and whole green chillies are served on the side. Whip up your own vada pavs with this recipe.

Bhel puri, a light street snack, is usually served in little packets made of old newspapers. Instead of spoons, you get a flat, hard puri (which you eat at the end) to scoop up the delicious mix of puffed rice grains, a sweet tamarind chutney, a spicy green chutney, onions, tomatoes, and potatoes. It’s topped off with a dash of lemon juice, a dusting of chaat masala, and a sprinkle of sev, crunchy noodles made from chickpea flour. Depending on the season, there could also be raw mango pieces and pomegranates thrown in. You can ask for a sweet or spicy version based on your preferences. Want to try making bhel puri at home? Here’s how.

There’s a Mumbai phrase that people use when they’ve been insulted:”izzat ka falooda ban gaya,” in which izzat means “reputation” and falooda refers to a dessert-drink with vermicelli that is shredded—much like one’s prestige, perhaps. Faloodas are a sensory overload of different textures, flavors, and colors. The layered drink, traditionally served in a tall glass, includes squishy soaked black basil seeds, vanilla ice cream, ruby-colored jelly, crushed ice, rose syrup, and vermicelli noodles that range in color from white to neon green to hot pink. A popular variation uses mango flavoring. Give falooda a shot with this easy-to-follow guide.

Just like the city, this item is incredibly versatile and can take multiple forms: toasted, untoasted, filled with a mix of raw onions, tomatoes, cucumber, capsicum, and beetroot, or with a seasoned mash of boiled peas and potatoes. The star of the sandwich is the green chutney—usually made of coriander, chillies, and garlic—served on the side or slathered on top of the toast along with butter. Here are two variations (toasted and untoasted) to try.

Irani cafes are one of Mumbai’s most charming attractions: old-school, no-nonsense eateries run by members of the city’s Zoroastrian community with roots in Persia. One of the staples to order at these joints is a bun maska and chai, a sliced bun with a generous heap of soft butter in the middle and a cup of sweet, milky tea flavored with spices like star anise and cardamom. Brew some yourself some Irani chai with this recipe. 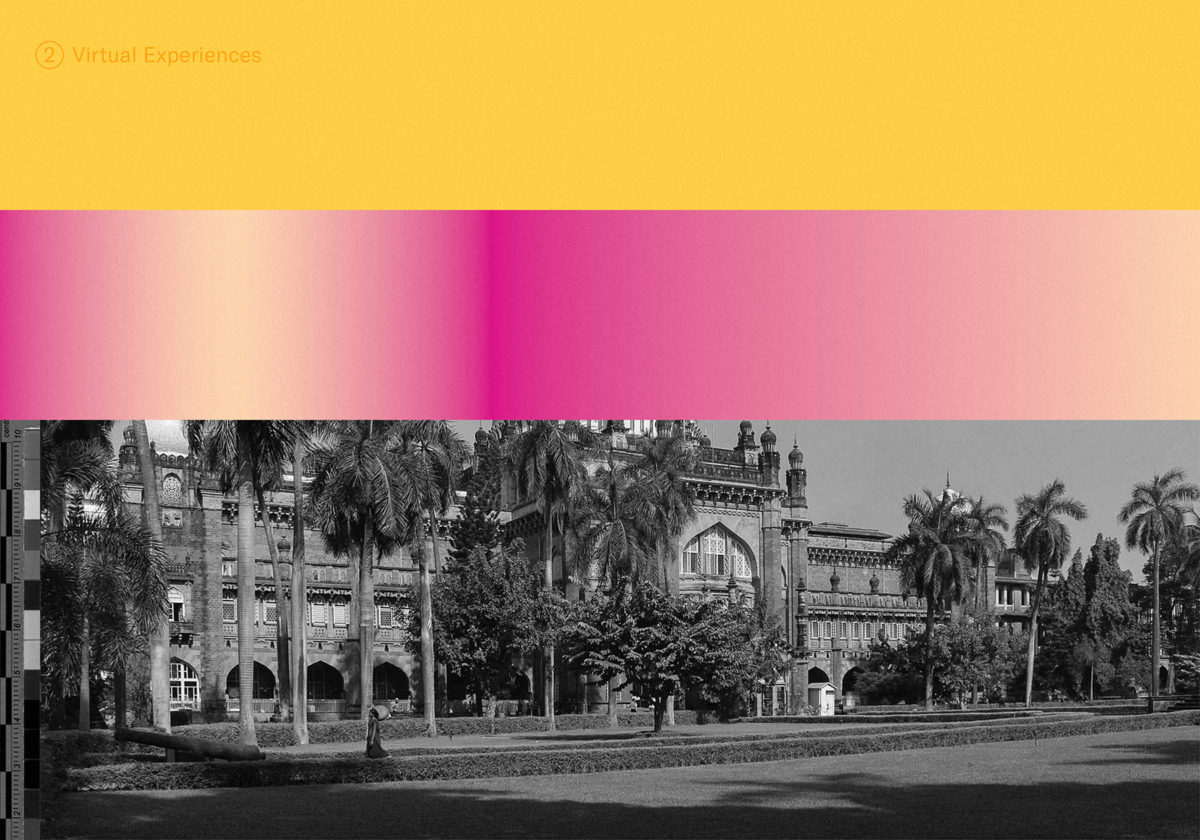 Museums and Art Galleries of Mumbai

The Chhatrapati Shivaji Maharaj Vastu Sangrahalaya is the city’s premier museum with sections dedicated to art history and natural history. There are 70,000 exhibits from Asia and Europe including 8th-century Buddhist sculptures, coins featuring ancient Indo-Greek kings, and the lower jawbones of a blue whale, the largest animal in recorded history. The Dr. Bhau Daji Lad Mumbai City Museum, the city’s oldest such institution, deals with Mumbai’s origins and evolution. Here, learn about how the cotton trade helped the city grow into a commercial hub and how seven islands became a heaving metropolis. Get a taste of the Indian art scene by following galleries like Chemould Prescott Road and TARQ online.

Mumbai offers up hundreds of incredible stories, if only you take the trouble to peel back the layers. Luckily, many of the city’s walking tour companies, like Khaki Tours and The Inheritage Project, have done the hard work and offer their guides online with talks and virtual tours. Sign up to dive into the city’s riveting history.

Two striking styles of architecture in the city merit exploration. The first is the Victorian Gothic style, best seen in the Chhatrapati Shivaji Terminus railway station. Completed in the late 1880s, the building was given a UNESCO World Heritage Site tag in 2004. Explore Chhatrapati Shivaji Terminus’s breathtaking grandeur, stained glass windows, and intricately detailed stonework. (Fun fact: The flora and fauna carvings on the building were partly overseen by John Lockwood Kipling, father of Rudyard Kipling and a faculty member of the nearby art college).

The second architecture style worth noting is the art deco style. Mumbai is said to have the world’s second-largest collection of such buildings after Miami. Get acquainted with the residences, cinemas, and even gas pumps that exemplify this style.

The Hindi film industry, aka Bollywood, is a part of Mumbai’s daily life. It isn’t uncommon to walk past live film sets while traveling through the city, see movie stars at restaurants, or stumble upon larger-than-life murals on quiet streets. Bollywood experiences in the city include visiting the sprawling Film City complex and driving by the homes of popular actors and actresses (often considered neighborhood landmarks). Until you get here, sign up for Bollywood dance classes and get familiar with Netflix and Amazon Prime’s Hindi film catalog. 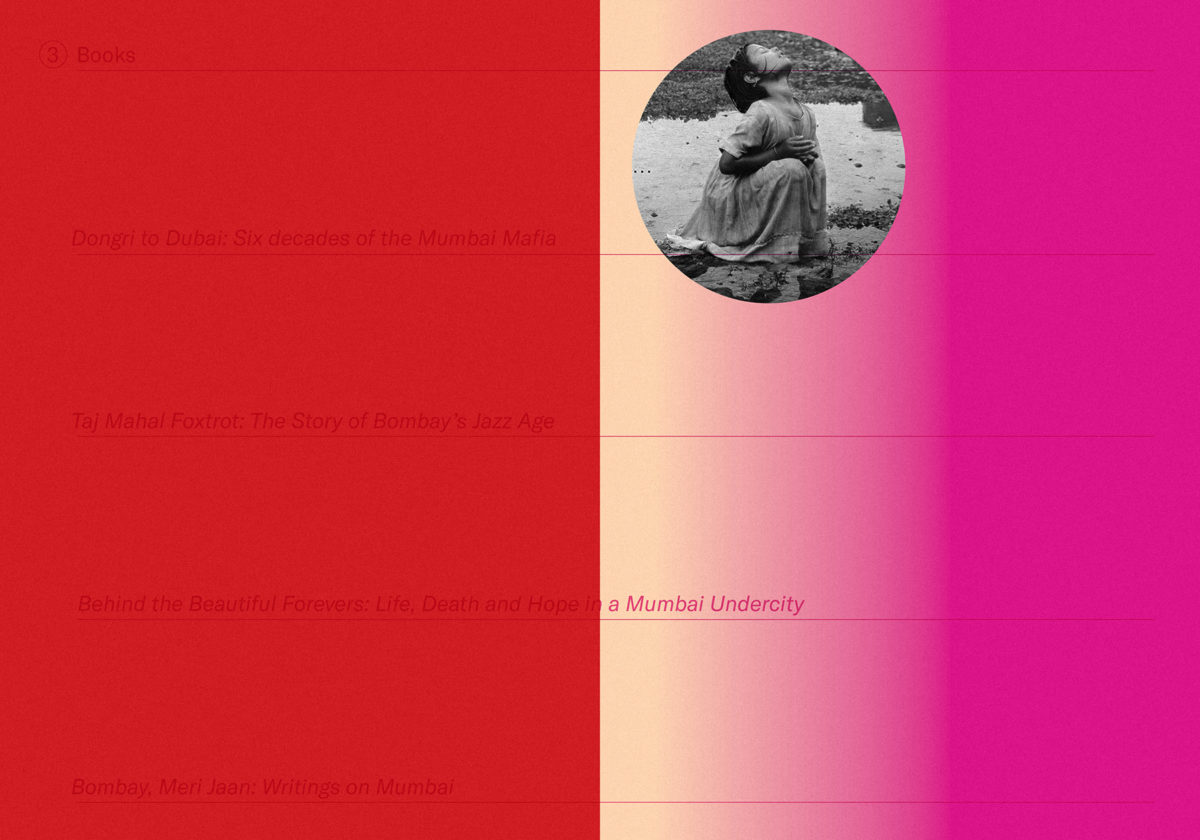 Books Based in Mumbai

This is a great read to learn about a lesser-known aspect of Indian musical history. Fernandes deftly weaves a narrative that includes tales of African-American musicians like Leon Abbey (who brought the first all-black jazz band to Mumbai), how jazz and swing music influenced Bollywood tunes, and the role of jazz musicians in nation-building projects. You can dig into the archives and enjoy performances and photographs from back in the day on Taj Mahal Foxtrot’s eponymous blog.

Some of the biggest names in literature, including Pico Iyer, Paul Theroux, Saadat Hasan Manto, and Salman Rushdie, come together in this anthology (whose title translates to “Bombay, My Love”) of prose, poetry, cartoons, and photographs. Pinto and Fernandes are well-known city chroniclers and have chosen pieces that turn the spotlight on some unique aspects of life in Mumbai.

Behind the Beautiful Forevers: Life, Death and Hope in a Mumbai Undercity by Katherine Boo

Pulitzer Prize winner Katherine Boo’s debut book focuses on the families of Annawadi, a slum near Mumbai’s shiny international airport. Through the characters she encountered, Boo brings to life a world filled with, among other things, hope and heartbreak. The title refers to the ads found on the wall that hides Annawadi from public view—the words “Beautiful Forever” are repeated across the banner.  Behind the Beautiful Forevers won multiple awards and was named among the best books of the year by outlets including The New Yorker, The Economist, and the Financial Times.

Dongri to Dubai: Six Decades of the Mumbai Mafia by S. Hussain Zaidi

Mumbai’s mafia has proved to be rich fodder for storytellers. In this book, veteran crime reporter S. Hussain Zaidi traces the evolution of the underworld in Mumbai, from the formation of its gangs to its Bollywood connections to its growing clout. Zaidi has written several books on the topic, including one that focuses on Mumbai’s mafia queens. 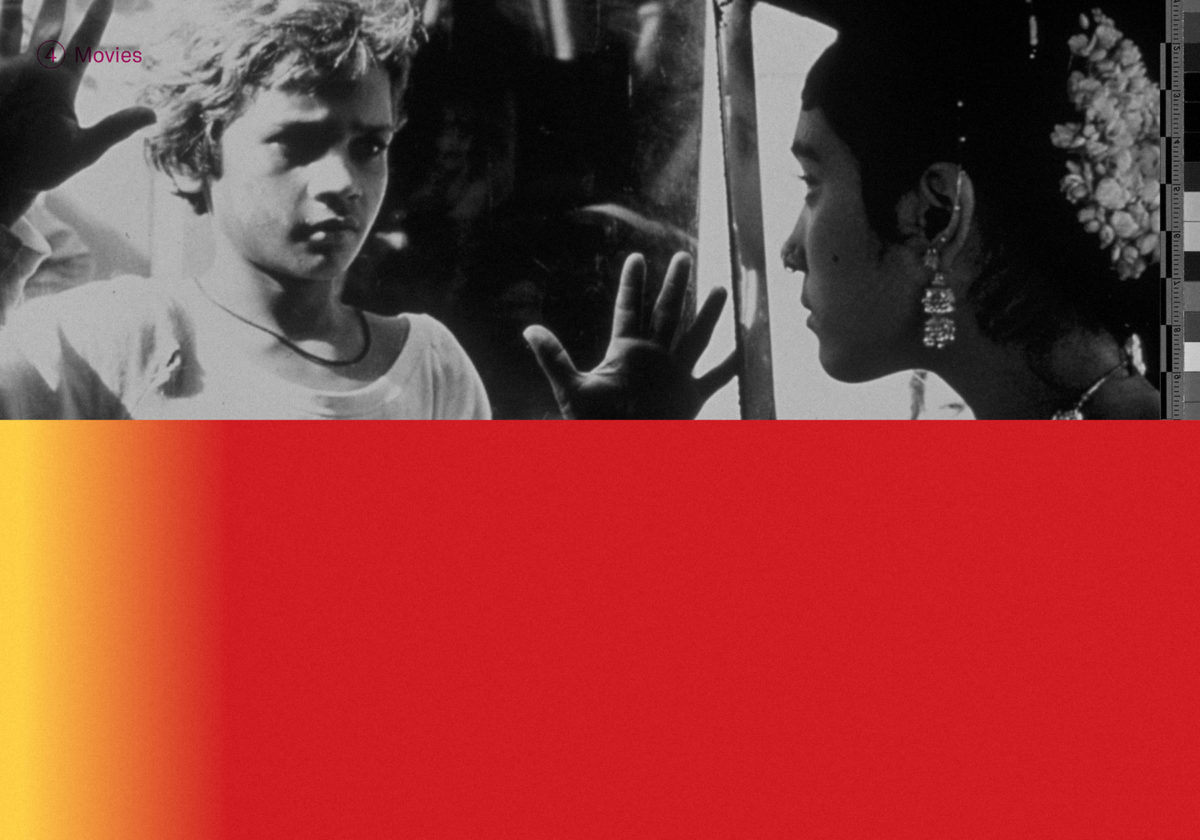 Movies Based in Mumbai

This critically-acclaimed film tells the story of a couple navigating the challenges of belonging to different religions against the backdrop of growing communal tensions. Shekhar Pillai, a Hindu, and Shaila Bano, a Muslim, flee their small towns for Mumbai, where they raise their children. The family is threatened by deadly religious riots that engulf the city, a story inspired by the real events that took place in Mumbai between December 1992 and January 1993. Rent Bombay on YouTube or Amazon Prime.

The Oscar-nominated Salaam Bombay! is a visceral look at the lives of Mumbai’s street children. Many often have to fend for themselves, developing smarts, support systems, and bonds that help them navigate the grim realities of daily life. The film’s lead character, Krishna—played by an actual street child—comes to the city after being left behind by the traveling circus he works for. He works odd jobs and finds himself in a world of beggars, prostitutes, drug pushers, and cops. Watch it online here.

Satya explores Mumbai’s notorious underbelly, rife with gangs, dons, and crooked cops. With characters inspired by real mobsters that director Ram Gopal Varma heard about or encountered, the film is considered by many to have changed the course of Mumbai gangster flicks. Watch Satya on Amazon Prime or Eros Now.

A stacked, steel lunchbox gives this film its name. An uncharacteristic mix-up in lunch deliveries by Mumbai’s famous dabbawalas (deliverymen whose usually foolproof methods are the subject of a Harvard Business School case study) brings together the elderly widowed Saajan Fernandes and the married-but-lonely Ila. Through food and notes hidden in between rotis, the two develop a bond that helps them grow. Watch the movie on Netflix.

6 International Films to Transport You Elsewhere → 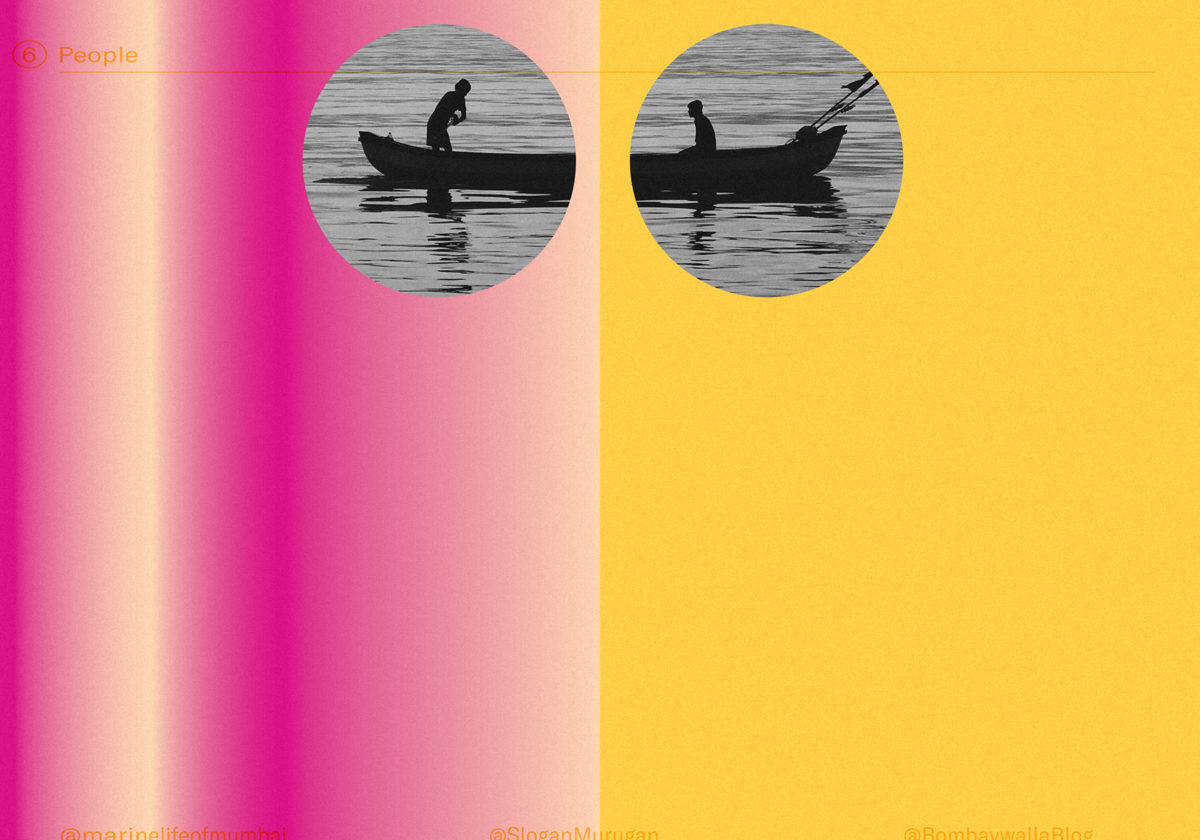 This citizen-driven initiative helps people understand the coastal biodiversity in Mumbai, from its threatened mangrove habitats, to the intriguing species found on sandy and rocky shores, to how the coronavirus pandemic has impacted the fishing industry.

Adman Gopal M.S. looks beyond the standard sights associated with Mumbai and shares snapshots of the real city: its narrow lanes, forgotten residents, and vanishing landscapes. The pictures give you a sense of what everyday life is like in the city.

The Bombaywalla team digs up interesting tidbits from Mumbai’s storied past and archives current cultural and social icons that could be lost soon. Check out the Bombaywalla blog for a treasure trove of information on the city.