Musician, poet, and activist Jamila Woods grew up on Chicago’s South Side but left as a young adult, uncertain of what the city could offer an ambitious artist like herself. With a move back to Chicago and the release of her new album, LEGACY! LEGACY!, the Here Issue 09 cover star is confronting the influences that make her who she is—including the city she’s called home all along.

It’s early on a Saturday morning and writer, poet, and singer Jamila Woods is walking swiftly to the entrance of the Young Chicago Authors (YCA) building. Dressed comfy-cozy in a large jean jacket, Woods unlocks the doors with her AirPods still in her ears. Aside from a few joggers and cyclers, the block is nearly as quiet as she is. We enter the mostly empty first floor, where Woods has set two chairs on opposite sides of a small black table. She’s quiet at first, yes; but, being familiar with her work, I know she has a whole lot to say.

On her second solo album, LEGACY! LEGACY!, Woods honors artists who’ve impacted her music, while cementing her own legacy in the city she loves and calls home—though pursuing a career in the arts here in Chicago wasn’t always a clear choice. 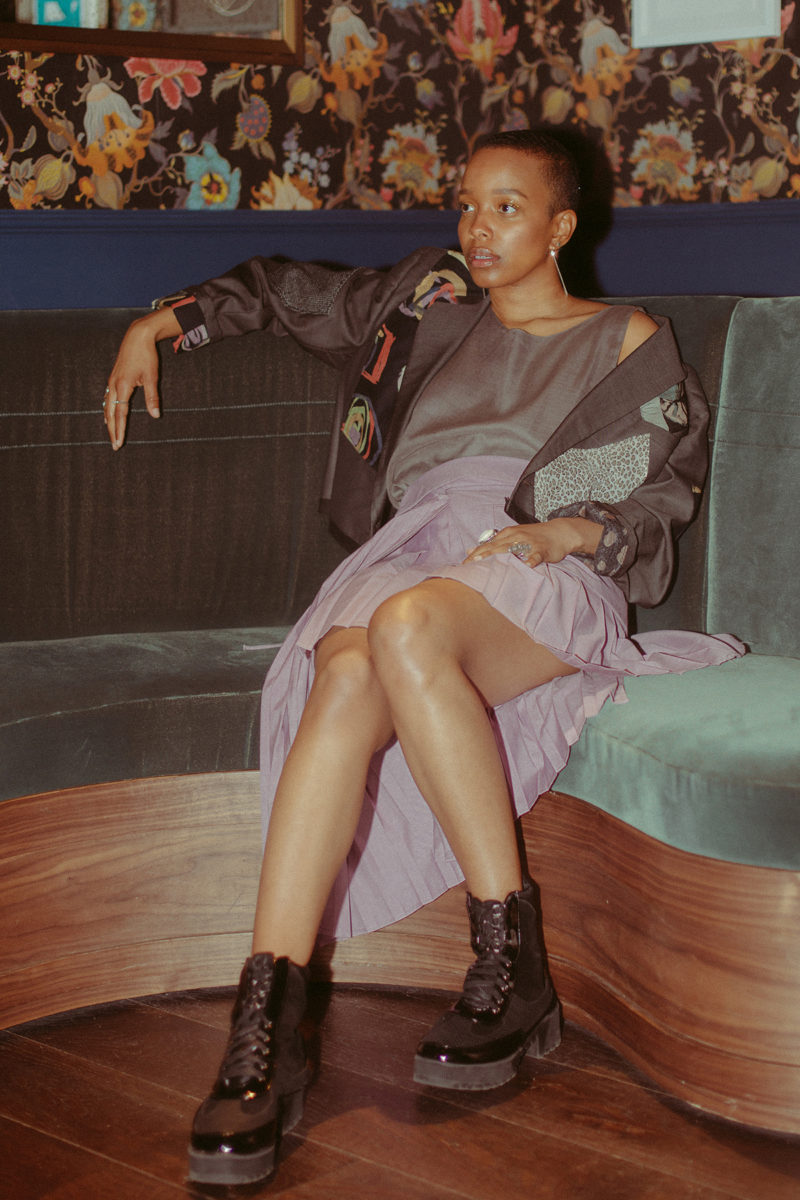 "Going to school on the East Coast, people didn’t really think about
Chicago in terms of art...people who were creative weren’t considering, like,
‘Oh, I’ll graduate and maybe I’ll move to Chicago.’"

After graduating from Brown University in Rhode Island, Woods thought the only two places to take her talents were New York or L.A. Her hometown seemed an unlikely locale to continue cultivating her writing and sound.

“Going to school on the East Coast, people didn’t really think about Chicago in terms of art,” she says. “Maybe now with all the people coming out of Chicago they are more, but when I was going there, people who were creative weren’t considering, like, ‘Oh, I’ll graduate and maybe I’ll move to Chicago.’”

Woods hails from the far South Side of the city. Growing up, she attended several schools, struggling to adhere to the behaviors that were expected of her.

“Being in a lot of different environments, whether it was school or the church that I grew up going to, [I remember] always feeling like there’s different rules and different codes of behavior and spoken and unspoken ways you should act in all these spaces. So I remember feeling like I had to be a chameleon in a lot of ways in those different spaces,” she says.

Get an insider’s guide to Chicago from the stylist who perfected Woods’s look for Here Issue 09. 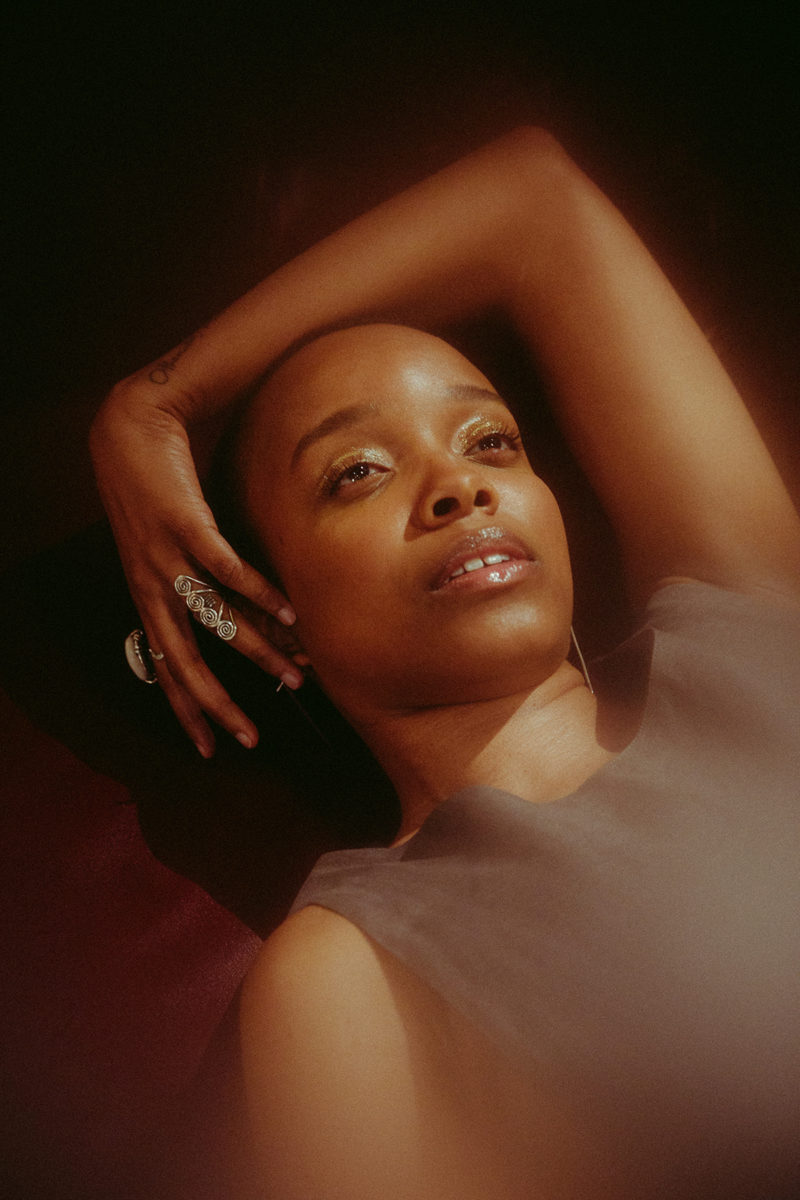 It was at Wicker Park’s Young Chicago Authors that Woods first felt that she could be her true self, no longer needing to blend in. Woods credits the community and culture of YCA, where she’s worked since 2014, for revealing the freer, more outspoken artist that she has grown into. Now, as Associate Artistic Director, she works with a new generation of young creators learning to embrace themselves as she once did.

“Through the process of the program I fell in love with the whole idea of poetry,” she explains. “I hadn’t seen poetry from people who looked like me unless they were, like, really old and not writing about Chicago or not writing about things that I knew. The teaching artists were so young and I could see myself in them. That was a really cool, desegregated experience in Chicago. It was very diverse—people from all sides of the city, all classes, and all different types of backgrounds.”

And though the Second City has plenty of tourist draws—from world-class food to Lake Michigan and Navy Pier—the city’s struggles with violence continue to dominate headlines, often marking Chicago as the “tale of two cities.” In spite of the sometimes bleak reality of the city’s violence and lack of resources, a narrative familiar to most major urban areas, Woods sees beauty in Chicago’s diversity, even if she needed to seek out unconventional means to discover it.

Read everything Woods shared with us on art, diversity, and community in Chicago. 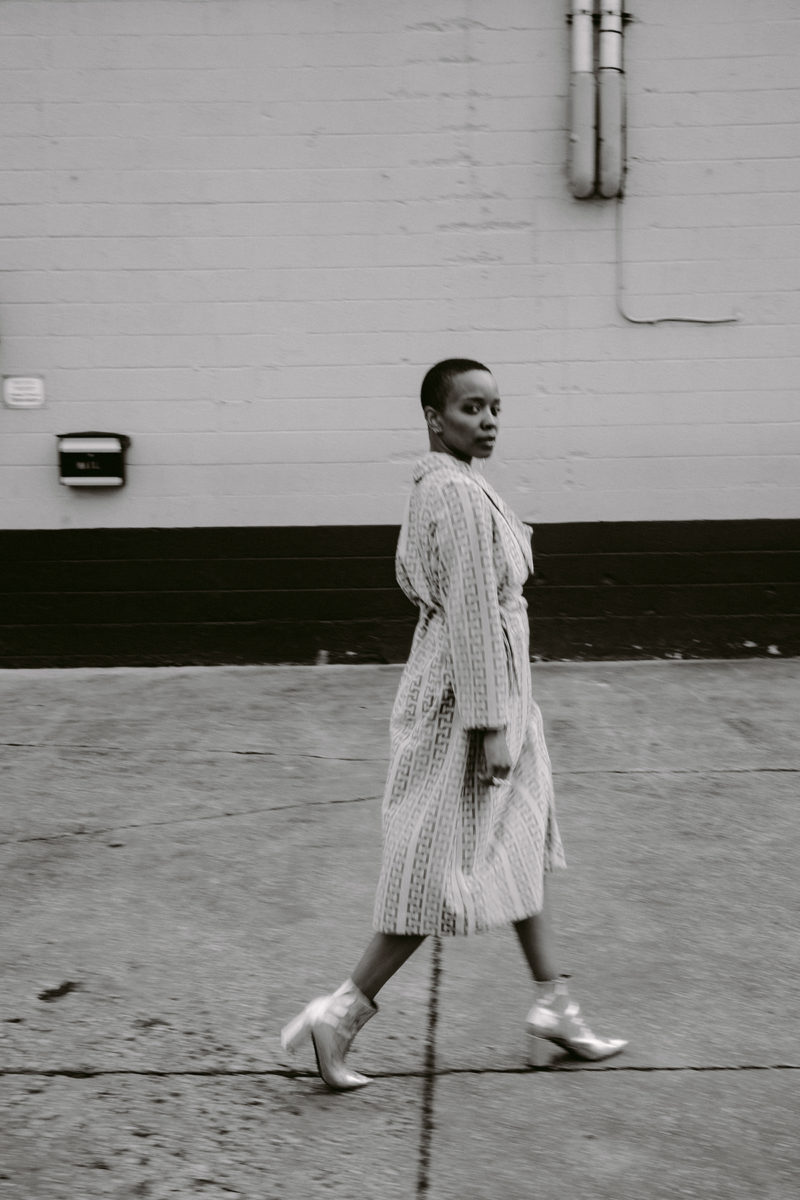 Woods didn't initially realize how much Chicago meant to her—
but in retrospect, she sees now that Chicago defined who she is.

Her tenure at YCA—and the time she spent as a kid at a free after-school program called Gallery 37 Center for the Arts—exposed Woods to communities in Chicago outside of her own. Learning the city’s history helped cement Chicago as an enduring part of her own story—a story that is now the backbone of LEGACY! LEGACY!.

Through these programs, Woods learned to love Bronzeville, now one of her favorite neighborhoods. Its connection to the arts—whether through poets like Gwendolyn Brooks or Chicago’s jazz and blues culture—particularly drew her to this historic district in the city’s predominantly black South Side. She even shot part of the video for “Giovanni,” a song on her new album, in Bronzeville.

“You can feel the energy of all the people that used to be there,” Woods says of the neighborhood. “Whenever I would be learning about poetry, Gwendolyn Brooks and Bronzeville would always be popping up, so it’s always been this legendary place. I love going there.”

She adds: “If you’re visiting Chicago, release what you’ve heard about Chicago and allow yourself to experience it for yourself. The South Side Community Arts Center was named a national treasure [in 2017 by the National Trust for Historic Preservation]. Really investigate what are places in the South Side or the West Side where history has happened and go experience that because it’s special to see and not always protected.” 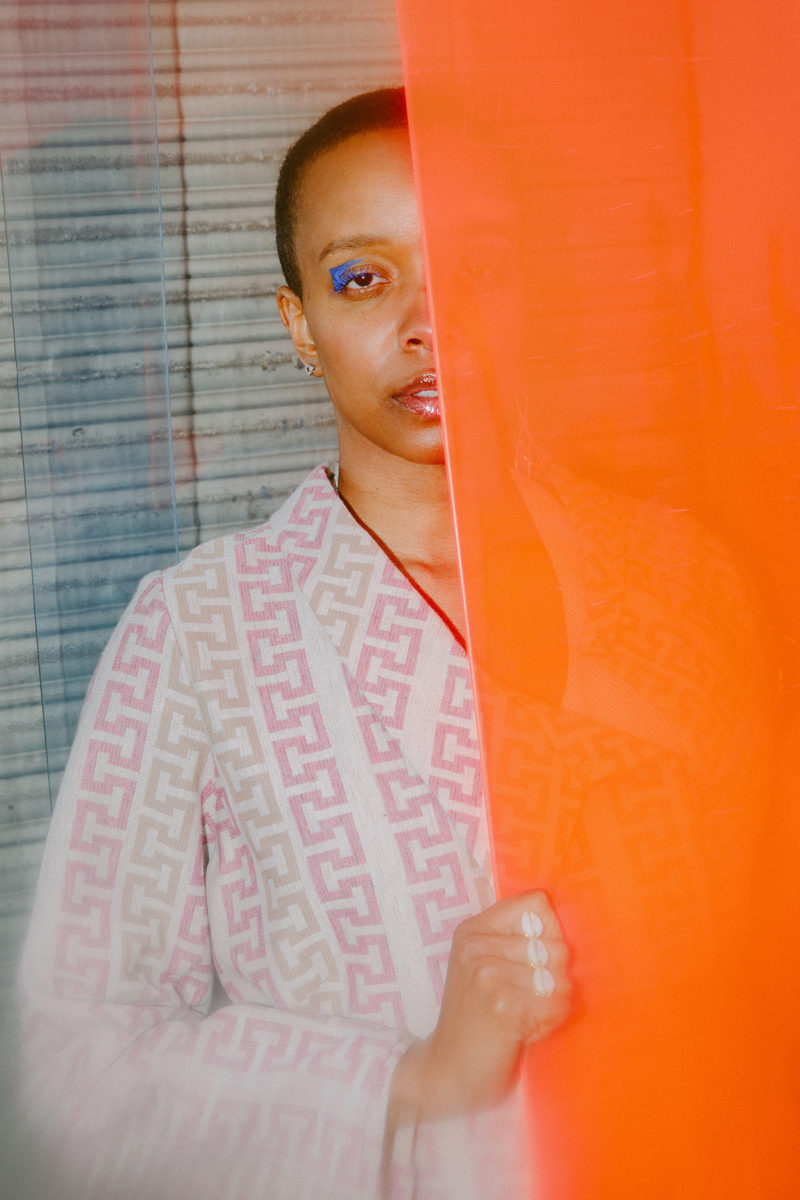 Woods's second album, LEGACY! LEGACY!, honors the artists and the city that inspired her.

Ahead of her tour for the new album, Woods did a performance titled “HEAVN Here,” a live, multidisciplinary set, as part of the Red Bull Music Festival in Chicago, where she performed songs from her first solo album, HEAVN. Poets from YCA joined her onstage, as well as a local choir, local footwork dancers, and local visual artists. “HEAVN Here” showcased beautiful talent right here in Chicago—and it was all executed how Woods imagined it.

From house to hip-hop, these are the places to see Chicago’s best musical acts.

“I was like, ‘This is what I wanna do, these are the people I want to do it with, and I’m going to be there every step of the way, telling you exactly how I want it to go,’” she says. “A lot of times in music, it’s been me having to push against this kind of imposter syndrome, feeling like I might not be the very best at this thing, but I love it so much and I want to continue to get better at it. I learned that I feel very confident about how I can program and how I can organize. I think that comes from working [at YCA] for so long.” 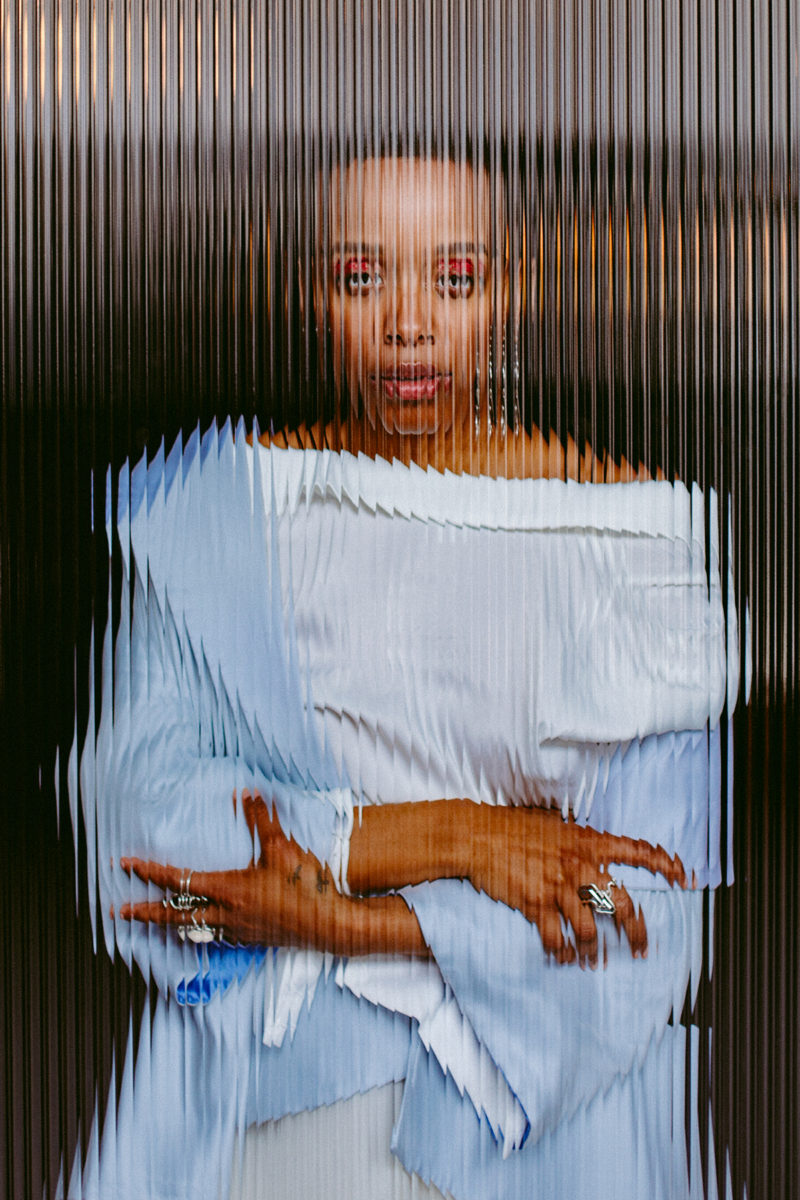 "This is what I wanna do, these are the people I want to do it with, and I'm
going to be there every step of the way, telling you exactly how I want it to go."

The organization regularly features different art exhibits on its first-floor walls; when we speak together, the exhibit on display is “Forms of Rest” by artists Jeremy and Farrah. While her artistry and organizing at YCA intersect, Woods is clear that maintaining steady self-care practices while continuing to create and perform is an ongoing balancing act.

Especially on tour. Woods is currently making her way around North America promoting LEGACY! LEGACY!, stopping in cities that already give her a lot of love (San Francisco and Philly), and others that are newer for the musician (Vancouver and Raleigh, North Carolina). And while the performer acknowledges that traveling as a black person can pose a range of challenges, she doesn’t fear exploring new places in the States or abroad thanks to the confidence she’s built as a student and now an educator at YCA.

As the artist scrolls through the list of tour locations on her phone, she says that for her, tour can be “lonely as fuck,” so this go-round her team is traveling on a tour bus for the first time.

“You’re doing this really adrenaline-filled thing—this sometimes vulnerable thing—of performing, and then you go to your hotel room by yourself,” she says. “Even though tour buses can maybe be smelly and loud, at least it’s together.” 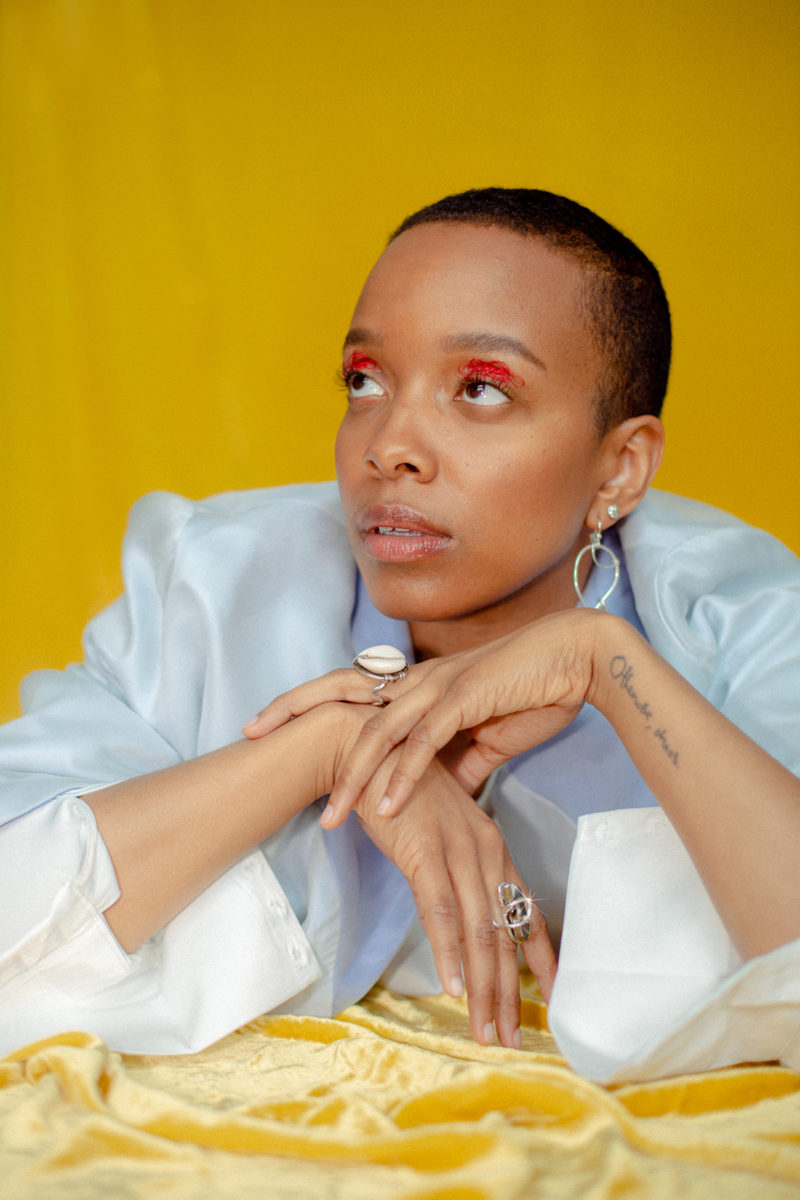 “You also need to be nurtured as an artist.”

To stay grounded, the multi-hyphenate takes a cue from The Artist’s Way by Julia Cameron. “I’m always journaling, or at least I try to be. I’ve been better at it these past few weeks. It’s low-stakes writing that isn’t supposed to be a poem or anything; literally whatever’s in your head,” she explains. She also meditates.

But most importantly, Woods goes on what Cameron calls “artist dates.” “I try to do something that’s like [I’m] not just a machine putting out a product, whether that’s going to a museum or watching a documentary,” she explains. “You also need to be nurtured as an artist.” And though her album is a celebration of those who have come before her, it’s Woods’s own legacy—as a true nurturer of self, art, and community—that we’re celebrating today.