The Winter Guide to Portland, Maine

Portland, Maine is worth the trip even during cold winter months.
Travel JournalMargie Dillenburg

Margie Dillenburg’s annual February trip to Portland, Maine brought cozy cocktails and warm noodles. Below, how to plan your own winter trip, plus how to make the best of a weather disaster while you’re traveling.

Portland is a lesson in northern hospitality, and home to one of the highest concentrations of world-class cuisine. This is the reason I make an annual pilgrimage there each February. Traveling to Portland while my compatriots are headed to Miami is not for everyone. I booked my trip this year with naive optimism. Despite it being below zero the last two years I’d made this trip, I allowed myself to believe I’d catch the one weekend with temperate weather. I made my list of reservations for the long weekend, booked my stay at the historic Francis Hotel, grabbed my pup, and started the easy two-hour trip north.

The pine tree-lined drive was as gorgeous as always, like Maine’s version of a red carpet. Surprisingly, the weather report told a story that supported my delusional fantasies, and there was zero traffic. I took it as a sign that everything was going to go exactly to plan. I checked in, cleaned up, and set off to begin my Maine adventure. 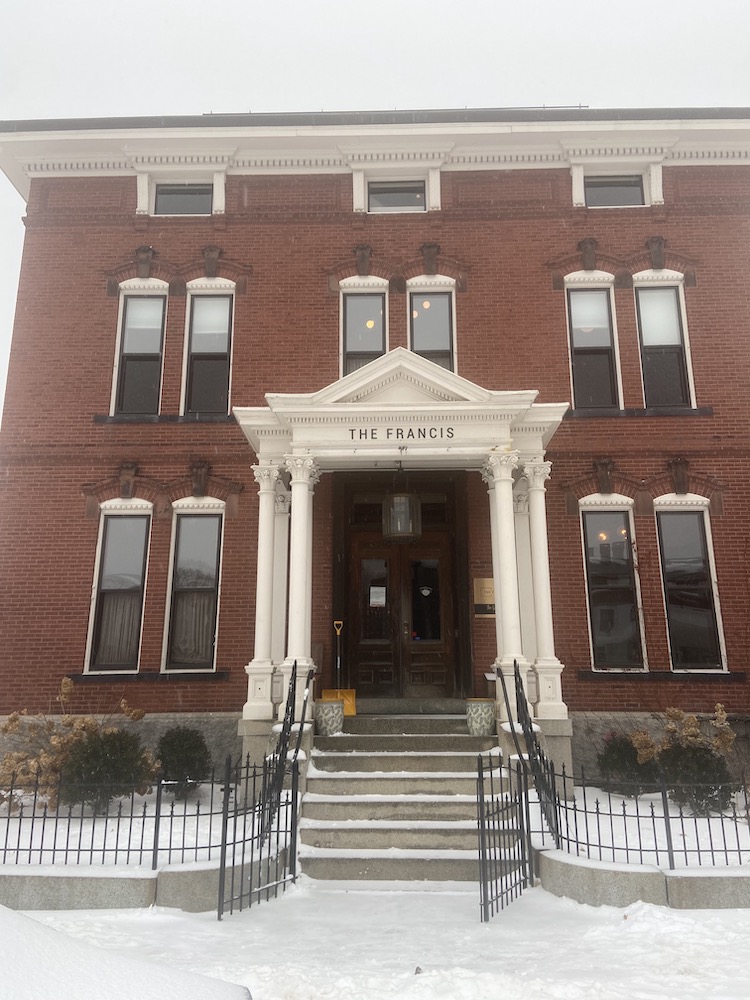 Built in 1881 by Francis Fassett, the Francis Hotel is on the National Park Service's Registry of Historic Places. 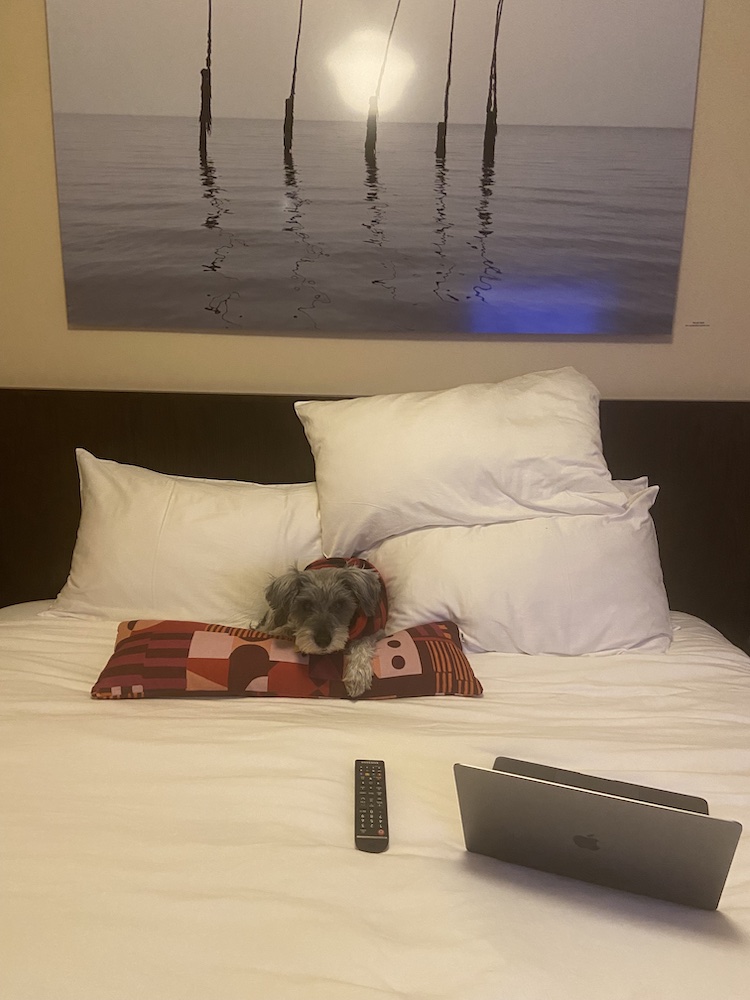 Inclement weather meant cuddling up with my dog and enjoying the hotel's amenities.

First up, I walked to meet two local foodie friends for dinner. Hannah Buoye and Billy Hager are a chef couple who earned their culinary pedigrees in San Francisco. Now, Billy is the head chef at a boat-to-table place called Helm, and Hannah is a baker responsible for the best biscuits I’ve ever had at Tandem Coffee Roasters, which was conveniently—but not coincidentally—located right next to my hotel. We shared plates of hand-torn pasta at James Beard-nominated Leeward while they told me about how their contemporaries on the west coast had started to follow them east. Tired of the agro food scene in San Francisco, chefs wanted to experiment and work on their craft in a town that appreciated it.

Hannah had to get up at 4 a.m. to bake those legendary biscuits, so we parted ways early. I decided to pop in and try a new place that just reopened called Wayside for a drink. The vibe was both sexy and cozy. The bartender gave me a taste of a natural wine she had just gotten in—a Slovenian orange wine with hints of baking spices. The hygge vibes were on point. I finished my wine and shuffled home with a small buzz and smug confidence. 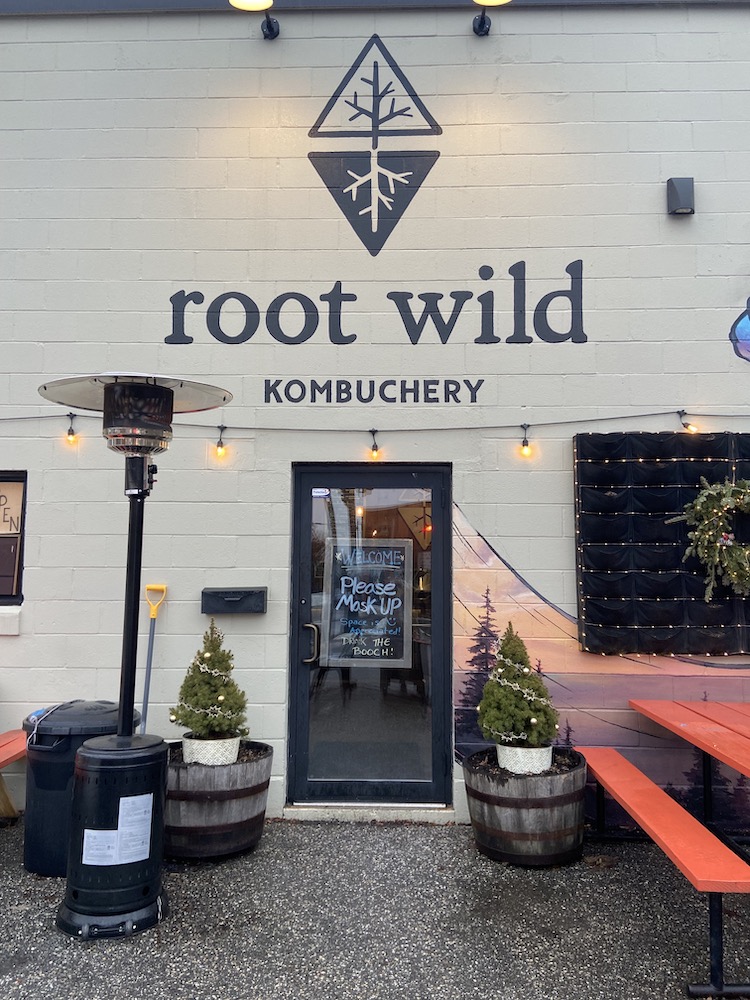 Root Wild is a great spot to enjoy craft kombucha and other artisan ales. 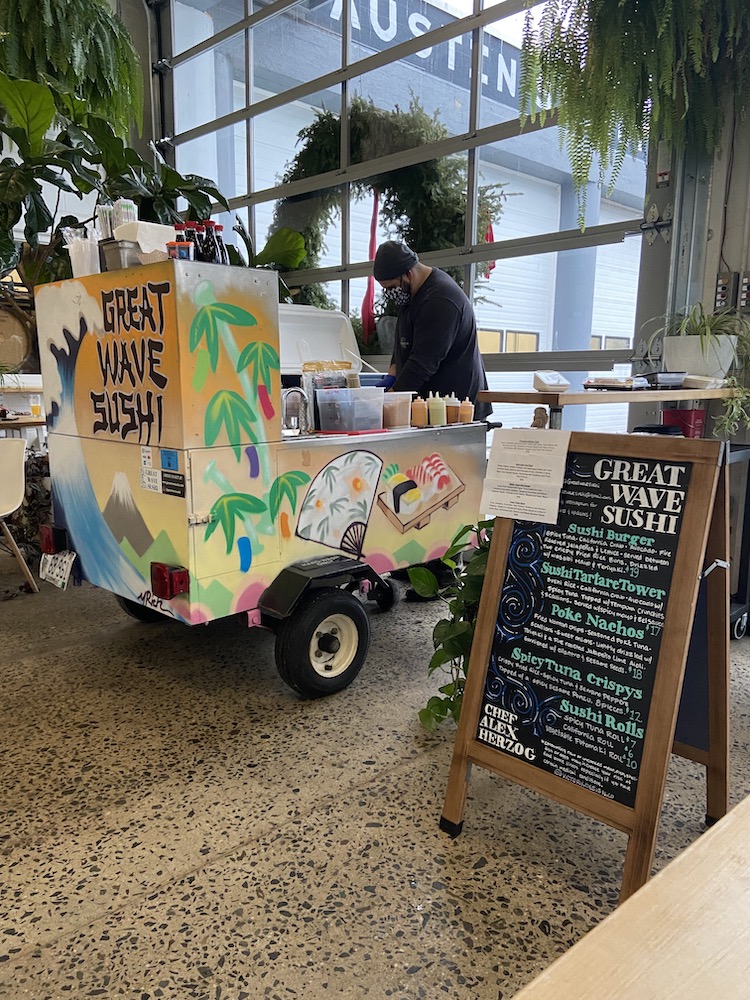 Great Wave Sushi offered some of the best bites on my trip to Portland. 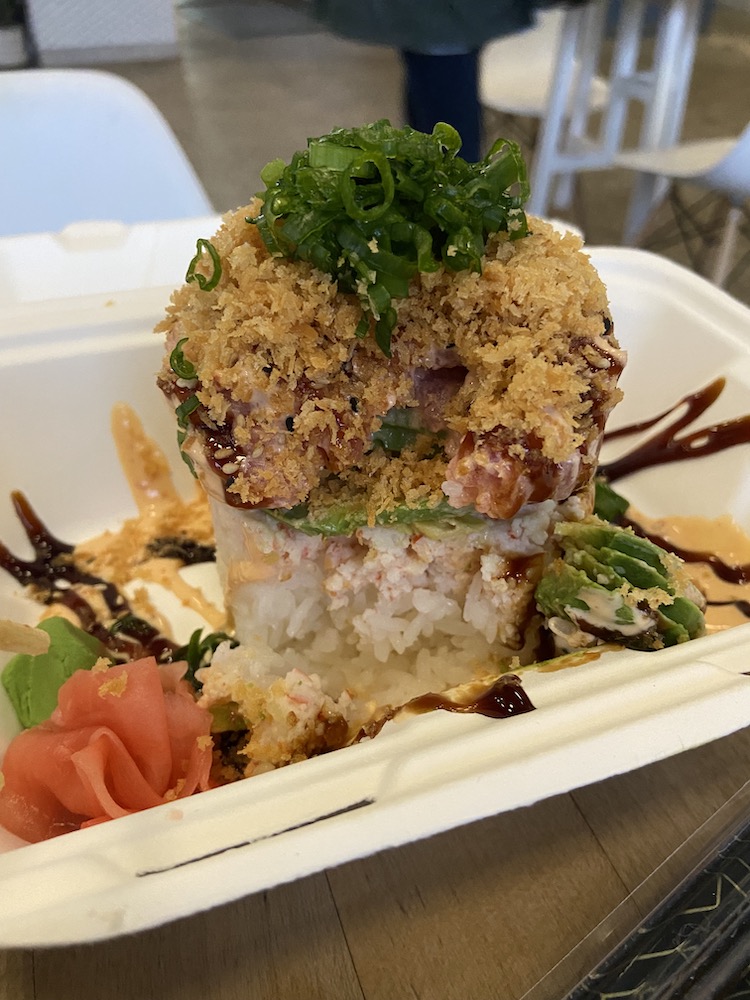 It's hard to believe sushi this fresh and delicious came from a food cart, but that's just one of the perks of being a harbor town.

It was only a few short hours later when I awoke from my childlike fantasy of “winter’s not so bad” glibness. The temperature had dropped below zero, and the precipitation was closer to ice than snow. The ice pellets felt like hundreds of little bee stings on any portion of exposed skin, and when they landed on the ground they turned the roads into luges. My car was properly snowed in, and then further buried by what the plows pushed aside to clear a driving lane.

I’m no quitter, so I pulled my coat tight around me and walked across the street for the baked goods and coffee I’d been looking forward to. Tandem had a sign on the door which read “closed due to weather.” I pivoted to walk to my favorite consignment store… Closed as well.

Undeterred, I regrouped. Portland residents had pride in being able to weather these harsh conditions for generations. What were they doing today? Instead of hustling to tick off my list, I decided to hygge hard. My dog and I cuddled, I ordered take out from Cong Tu Bot, booked the most amazing spa service, and wore the hotel robe all morning.

When I went out to check on my car, I was shocked. A neighbor had seen me struggling to clear it earlier, so while I was gone he had chipped my car out of the snow and ice. “We gotta be neighborly here—it’s how we survive,” he said. As a thank you, I asked him to go with me to Pai Men Miyake next door for lunch. We ordered two steamy bowls of ramen and boozy cocktails. When we thanked the staff for coming to work that day they echoed my new friend’s sentiment: “We knew our neighbors would likely need some hot soup and a warm place to go today. It’s how we do our part.” 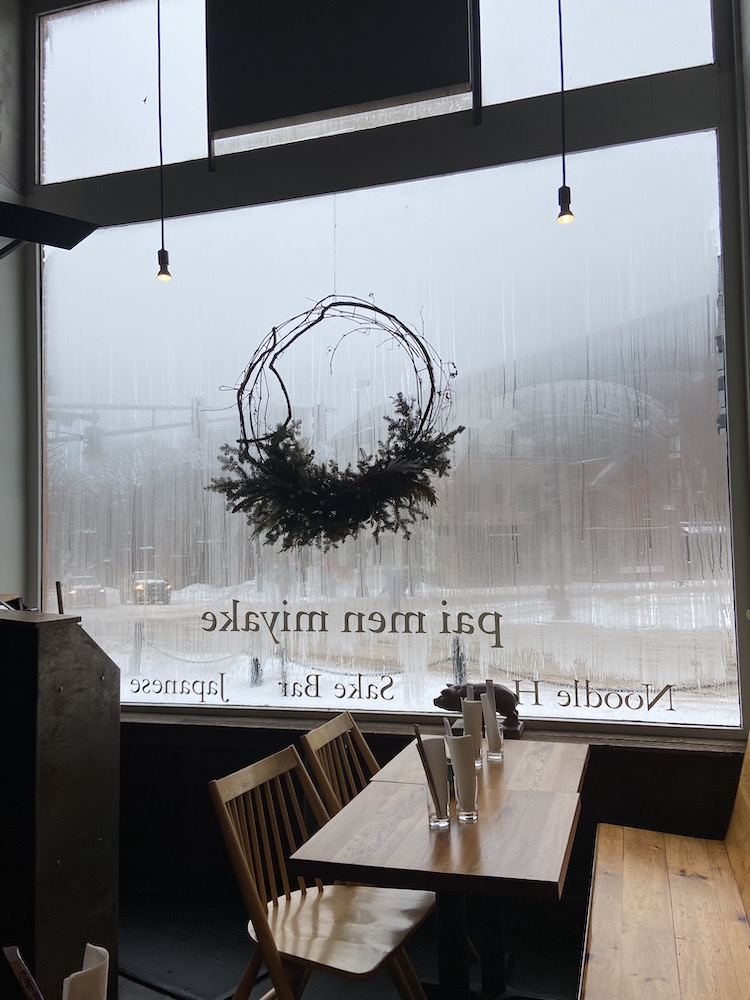 Pai Men Miyake is an izakaya where you can grab casual bites, plus hearty ramen and great cocktails. 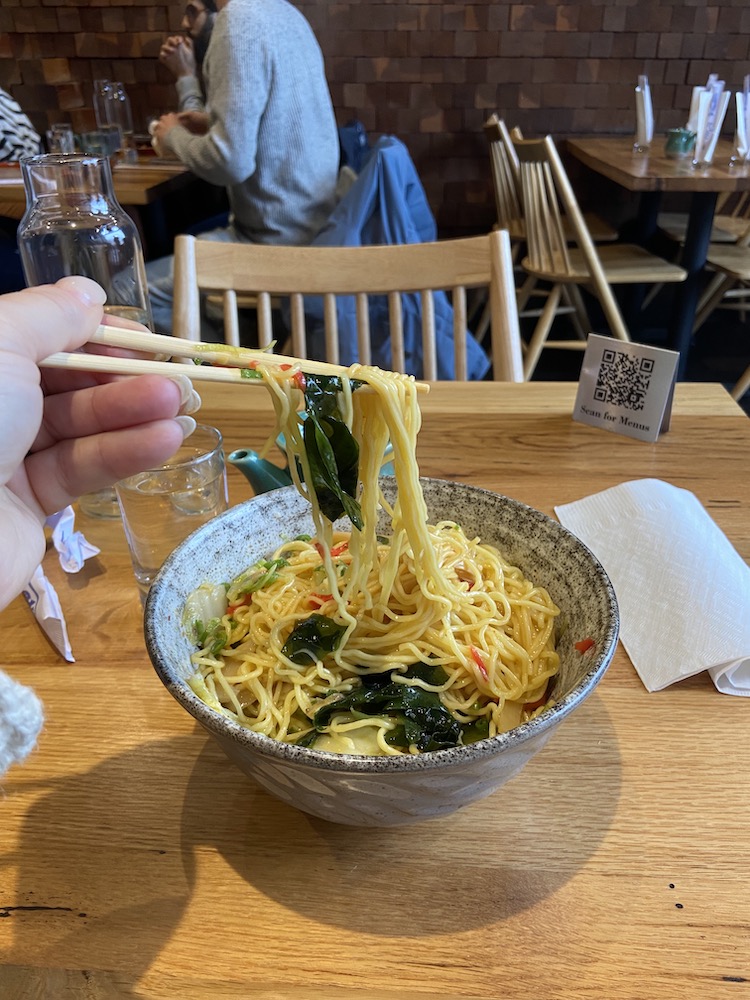 There's nothing quite like a steamy bowl of ramen to help you power through the cold. 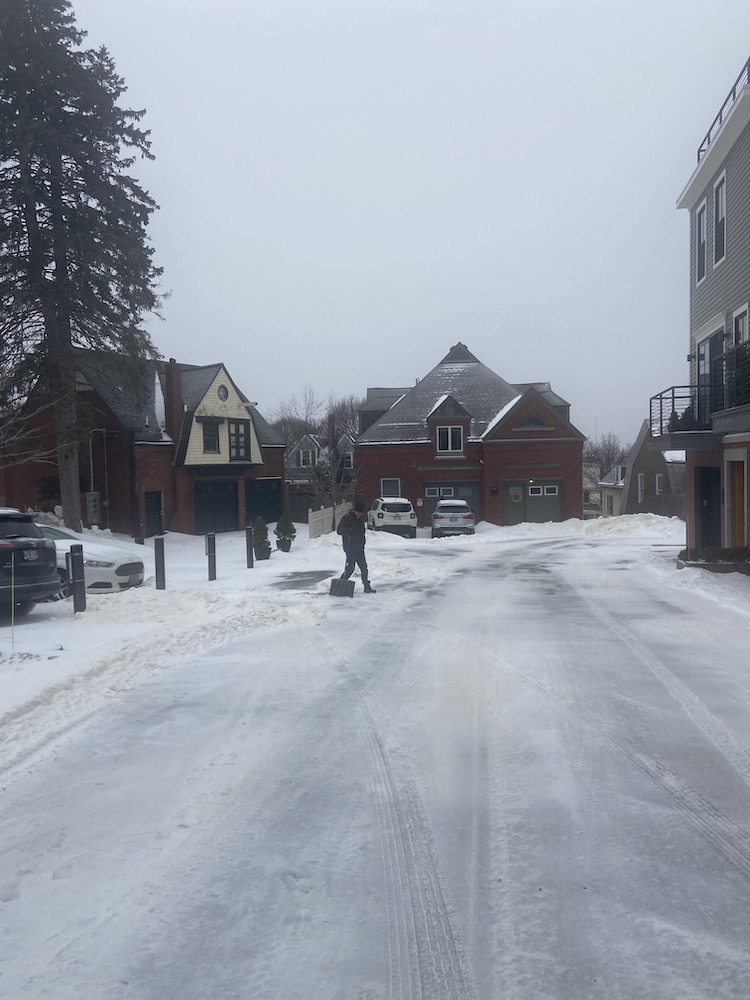 My neighbor's kindness transformed the entire trip. Digging my car out of the ice and snow for me, a stranger, formed a bond that I'll never forget.

Next, I set out to visit an old friend. Kazeem, the proprietor of Portland Trading Co, suggested we go for dollar oysters, a snow day tradition at a few Portland mainstays. We also visited Austin Street Brewery, where we were surprised by the quality of food from an unassuming food cart called Great Wave Sushi.

We decided to end the night close to home just in case the weather turned again. Next to us was a raucous table of folks celebrating a birthday. Our tables mysteriously seemed to melt together, and before we knew it we were sharing birthday cake and clinking champagne glasses.

The next day, feeling some present nostalgia and a snow day hangover, I ate leftovers in bed while watching a campy Bravo show, dreading check-out.

If I were to list the straight facts of the weekend to anyone, it might sound horrible; plans wrecked, shops closed, stuck in a few square blocks with a car packed in ice. However, the difficulty of the storm created a we’re-in-this-together camaraderie which is at the heart of Portland’s hospitality culture. Maybe it has to do with the fact that in order to be in Maine in February, you must really love Maine. And what is more bonding than a mutual love for a favorite place?