Kelly Zutrau with her dog, Tina, at home in Bed-Stuy, Brooklyn.
The Packing ListAlly BetkerTimmy Shivers

To a fan in the crowd or an aspiring musician writing songs in their bedroom, the opportunity to tour with a band seems like the perfect escape. But Kelly Zutrau, lead singer of indie pop band Wet, will be the first to admit that it isn’t always an easy life.

Growing up, Zutrau’s family hopped from location to location, never staying in one place for long. The more time she, her mother, and her sister spent on the road, the more the idea of “home” became a foreign concept. By the time the founding members of Wet moved in together in 2012, writing and recording their early tracks in a Bed-Stuy apartment, it would be just one in over 30 times that Zutrau had picked her life up and relocated.

Several years, moves, and months on tour later, Zutrau often finds herself searching for that sense of home. (She now lives in another Bed-Stuy apartment with her boyfriend and her dog, Tina.) Although her cool, steady singing voice gives her an air of effortlessness, the singer still struggles with being constantly on the move; but, it is precisely her honesty about those anxieties that makes her so relatable and her lyrics so sincere.

Set for a July 13th release date, Wet’s sophomore album, Still Run, is inspired by the highs and lows of Zutrau’s life in transit. “It’s been something that I’ve been working on for the last couple of years and sort of in a very abstract way, so to see it out in the world and be real and see people’s reactions is exciting,” she says. Here, Zutrau shares what she brings on the road to help her feel at ease, and how she’s turned tour life into inspiration for her writing.

Tell me about your general packing philosophy.

I’m usually packing until three hours before I have to leave. I’m not the most prepared traveler physically, but the week leading up to traveling, I try to stay in and be at home as much as I can. I hang out with my dog and eat well and go to sleep early because I know I won’t be able to do that on tour.

Is going on tour as cool as it sounds?

There are moments that are… Maybe, like, five percent of the time it is and then the rest of the time it’s just driving, sitting around, and waiting and doing nothing. I’ve started a habit of trying to write while I’m on the road because it was just so boring in the beginning.

Do you have a writing process on the road?

Yeah. Still Run actually was mostly written on the road. I used to feel really stuck when I was on the road. I had no agency, like I was just on someone else’s trip and didn’t know when I would eat, when I would sleep—that used to really stress me out. But the more I’ve done it, the more I’ve tried to get into it and be like, wow, I’m so lucky I get this sort of freedom in my life. I get to not have a schedule, and I’ve tried to fill my time with meaningful stuff like writing. So I’ll be jotting down words and phrases and then when a melody comes to me, I’ll record a voice note on my phone, and then when I get back to the hotel and if I have time, I’ll sketch out a demo with my mini keyboard. A lot of the songs from this album started that way. The album’s title, Still Run, is referencing never being anywhere. Just always being on-the-go and kind of feeling detached from any reality that’s grounded—being more abstract.

How do you think this album is different than Wet’s first album because of traveling?

We were touring more than ever while I was writing this album, so I think in some ways it was a really exciting time because I was constantly having new experiences and we were growing as a band and having all these firsts, like playing in the biggest venues we’d ever played in. And then there was also a lot of anxiety and fear that went into this time, too. I was realizing that my life was taking a different path than a lot of other people that I cared about, and I was feeling separate from them and separate from the world. When I came back, I was feeling a little detached and disoriented, so I think working through that inspired a lot of the songs.

So it was kind of therapeutic in a way?

Definitely, and that’s always how my writing process works. It’s whatever I’m getting through and needing to get through. For whatever reason, I want to sing about it. I don’t know why that’s what comes to me. A lot of what I was working through was related to being on-the-go for so much of the last couple years.

I think a lot of people aren’t the best versions of themselves when they’re traveling, because you don’t have a ton of control over things you’re used to having control over like what time you go to bed and where you sleep and what you eat. But on the other side, it helps you to grow and there are moments of joy that I don’t feel in my regular life that are amplified on the road. There are moments on tour when everything comes together and you really feel like you’re in it with everyone that you’re traveling with and that you’re part of something—and that’s rare to feel at home for me. It’s an effort to stay grounded and you have to put that work in and that’s something I didn’t realize in the beginning of touring. I was just like this just sucks. This is hard. Now I’m like oh, you have to get to bed by a certain time, and not eat too much shit. 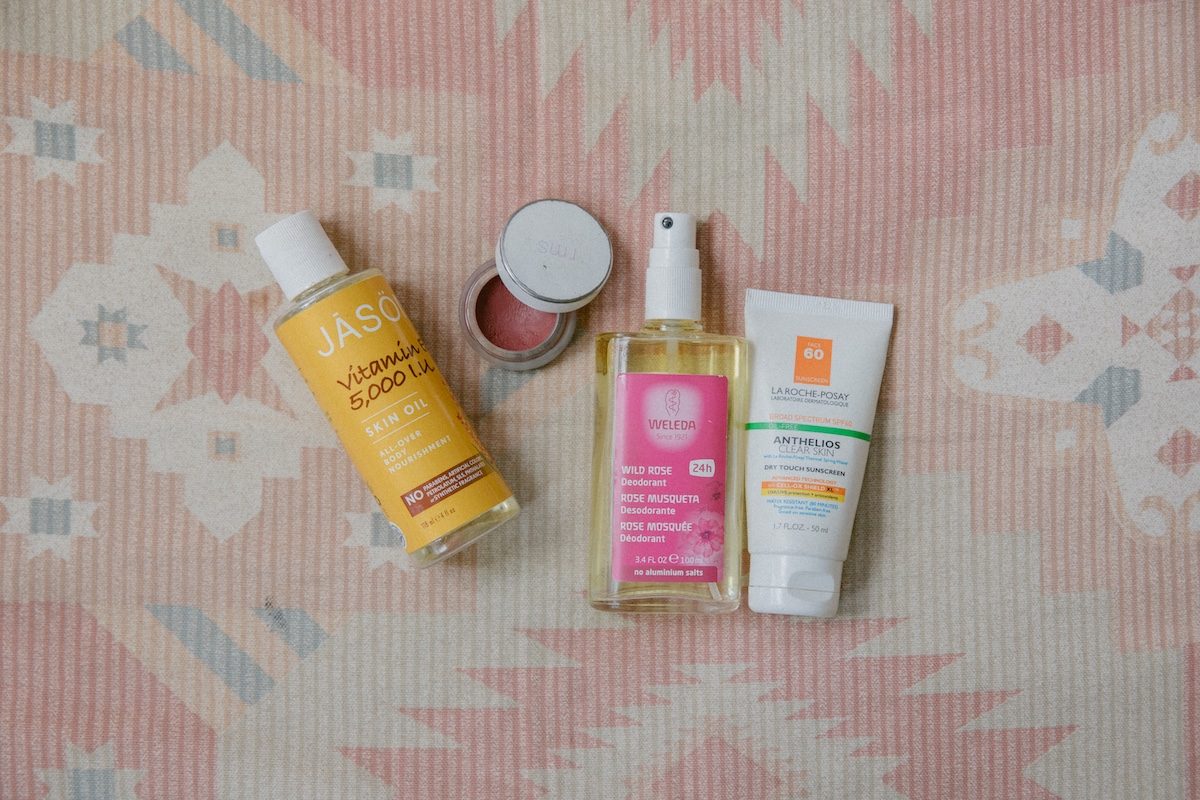 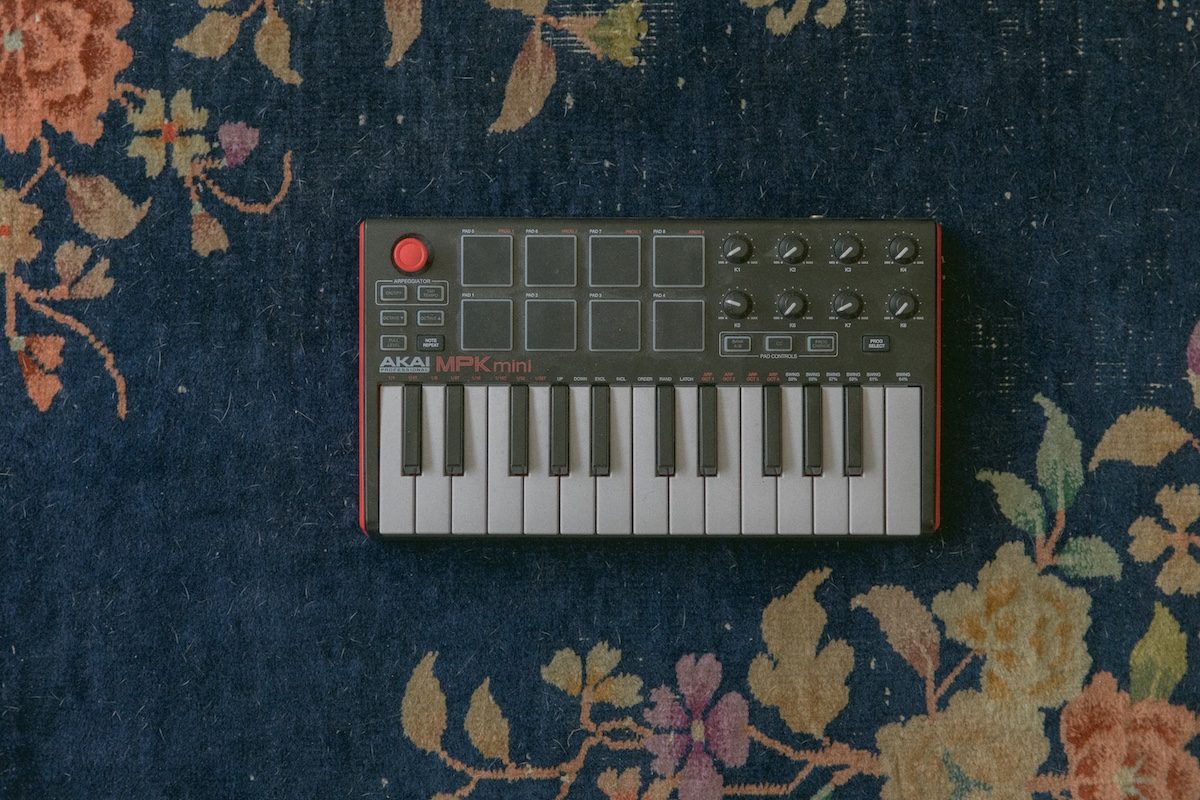 Zutrau always travels with her mini keyboard, so she can write on the road. 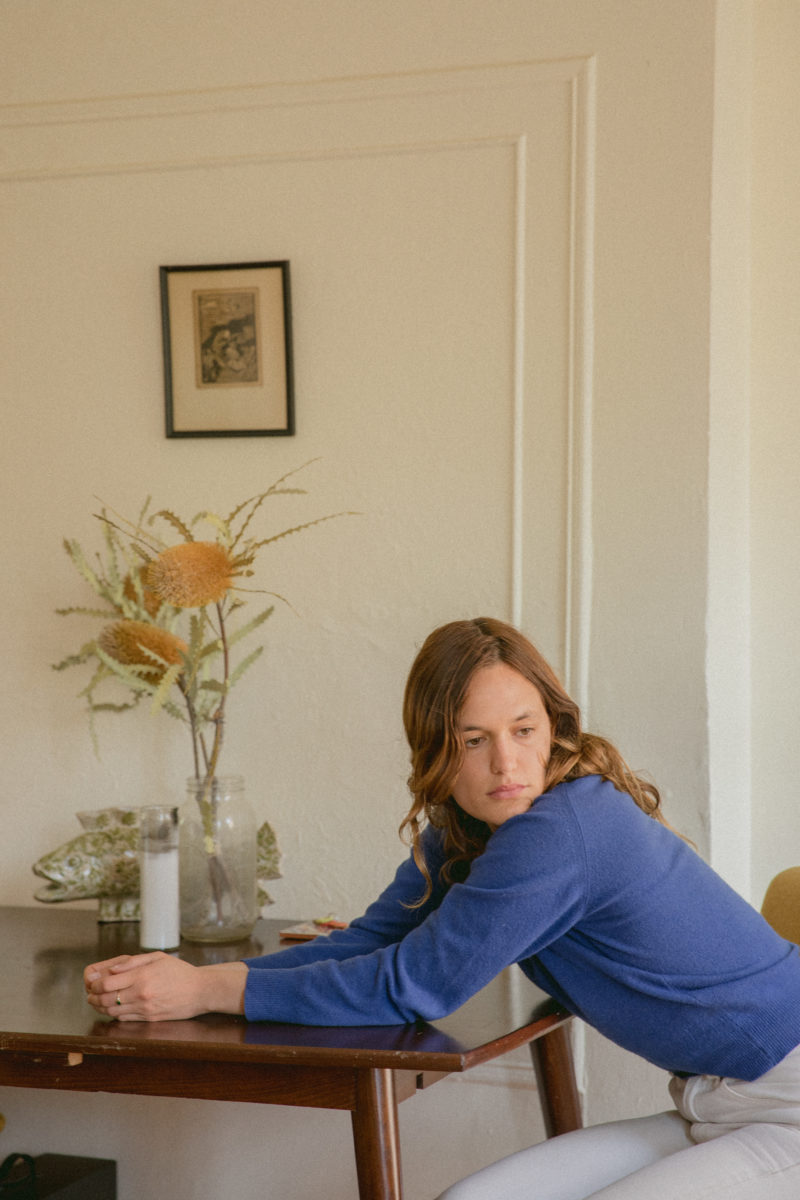 A moment of reflection in Bed-Stuy.

What are some things that you bring with you when you’re touring to feel grounded?

I definitely have a nighttime routine on tour that I try to stick to, like washing my face, as simple as it is. Washing my face every night and putting on oil and moisturizer and putting sunscreen on in the morning. Beauty care stuff does make me feel in control. I usually bring tea bags, too, like stress tea. I don’t know if it does anything, but if I can get it together to have a cup of tea at the end of the night that makes me feel in control and kind of calm. I bring my autoharp or the mini keyboard. That really helps to keep that writing process going, which makes me feel excited and creative on tour and like I’m getting stuff done.

What are the names of the beauty products that are part of your routine?

So there’s an RMS Lip2Cheek. The color is “Elusive” and I like to use every day and I take it everywhere and I put it on before shows and it’s kind of just like a quick thing that I use that I love. Then I have a vitamin E oil from the brand Jason. It’s cheap and I like it. I put on my skin, on my whole body. What else? I have a moisturizer and face cleanser from La Roche-Posay.

When you’re touring through cities, do you get to enjoy the local culture at all?

By now, in most American cities I have my go-to places. When we’re in Austin we go to the Tamale House. When we’re in LA we go straight to Taco Zone, which is a little truck in Echo Park, and then we go to this bar called Tex and sit and have drinks in this old, weird restaurant that feels like a living room. These places start to feel like home and so now I really enjoy it.  I tend to be very disoriented if I’ve never been to a place before. I think most people are, but I go into survival mode where I get a little uncomfortable and scared, but once I have a routine that I associate with the place then I can start to really relax and get into it. 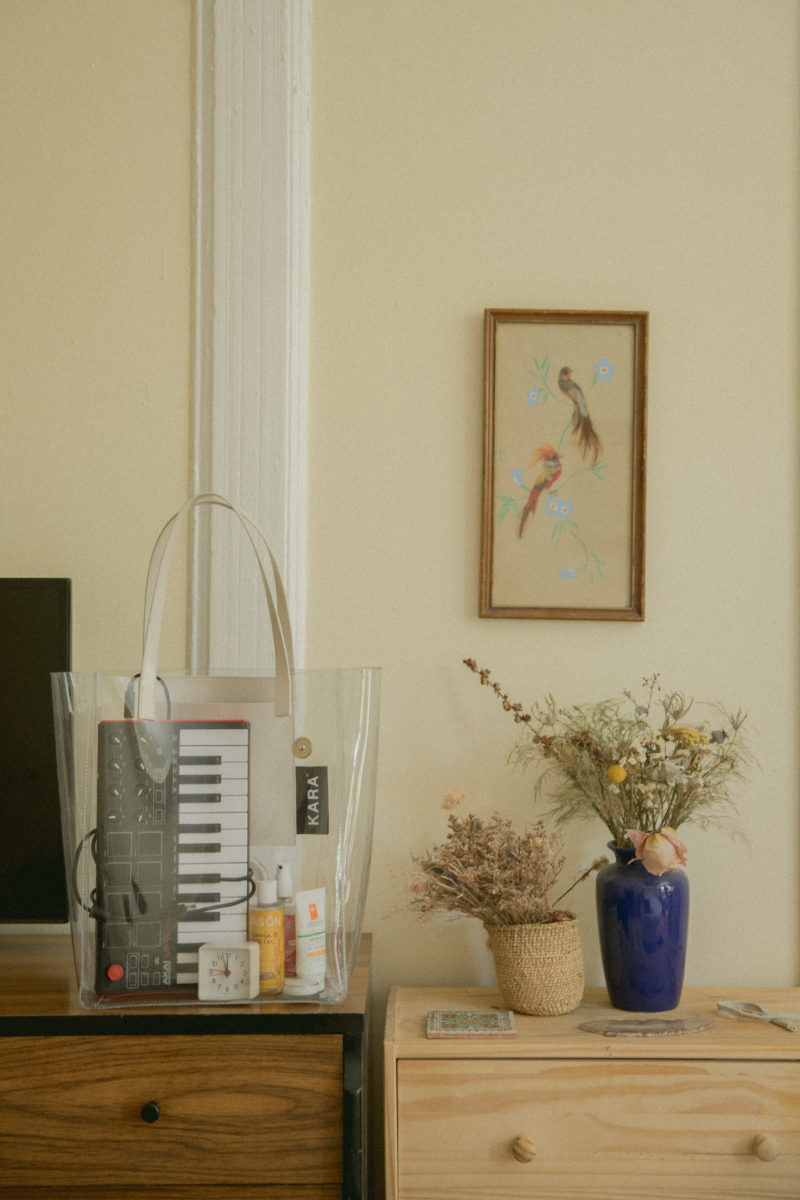 Packed and ready to go. 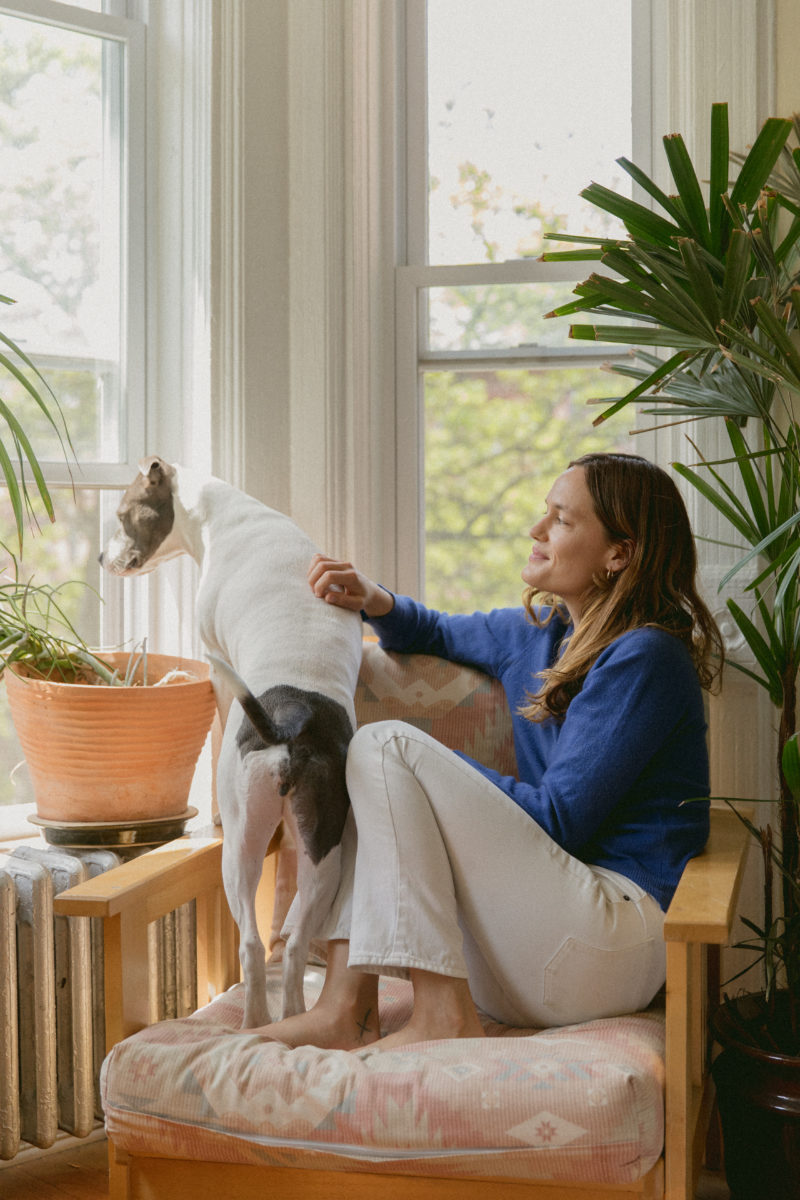 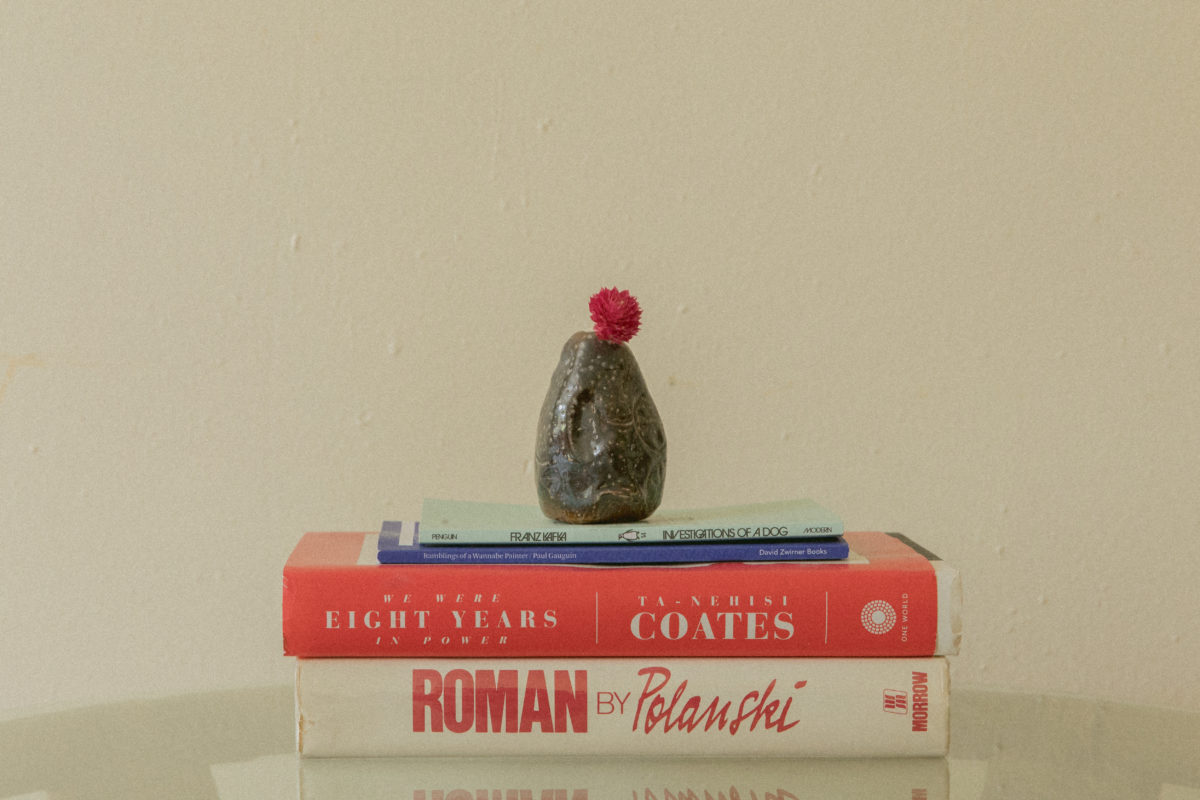 What are your favorite places when you’re home in Bed-Stuy?

My two coffee places are Anchor and Sincerely, Tommy. Saraghina’s is great for dinner. There’s this new restaurant called the Eva Jean’s that’s really good. Bar LunÀtico is fun to get a drink and listen to music. In Bushwick, there’s this restaurant called Café Bunna. It’s Ethiopian vegan and it’s so good. And there’s Pilar Cubana—I love that Cuban restaurant.

When you are actually in transit, what are the things that you always have nearby?

I always have Master & Dynamics headphones. Usually, I’m listening to our demos or if there’s an album I want to listen to I’ll do that on the plane or the van.  I really like the SZA album. That’s been out for a while now, but I’ve been listening to it recently. Bike Thief had an album come out last year that I got really into recently. I always have my little computer with me to write. What else? Coffee. I always have a coffee. I don’t really drink water. I need to start drinking water. I just drink coffee all day long.