Worth Traveling For: Wanda Reign on the Bund in Shanghai, China

There are certain places—show-stopping hotels, award-winning restaurants, local dive bars, or incomparable vintage shops—that are worth planning your whole trip around. Wanda Reign on the Bund in Shanghai, China, is one of those places.

Before 1842, Shanghai was closed to the world. When the world moved in, it was the British, fueled by their victory in the Opium Wars, who opened Shanghai’s ports. They chose for their home turf a mile of land along the Huangpu River and called it the Bund, shorthand for an embankment, and the name has stuck.

Construction boomed on the Bund for decades, peaking during the height of the Art Deco movement, the aesthetic trend that defined the visual output of Europe and the United States in the 1920s and 30s. It impacted everything from fashion to art to architecture.

There are 29 historic buildings on the Bund, each one a specific marriage of Deco and the tastes of whichever global power shaped it, whether Dutch or French or Japanese. Step through any of this global financial hub’s ornate doorways and you’ll find yourself in a very convincing 1930s simulation. Its buildings house banks, embassies, bureaus, the private spaces of the elite and government-affiliated, and, of course, luxury hotels.

Wanda Reign on the Bund, a Preferred Hotels & Resorts property, is the modern epitome of this era-specific phenomenon—with a plot twist. Though Art Deco was an imposition by foreign powers a century ago, Shanghai has now claimed the aesthetic now bygone in the West. And at Wanda Reign, it has been raised to a standard of maximalism and beauty so high nobody else could possibly reach it. 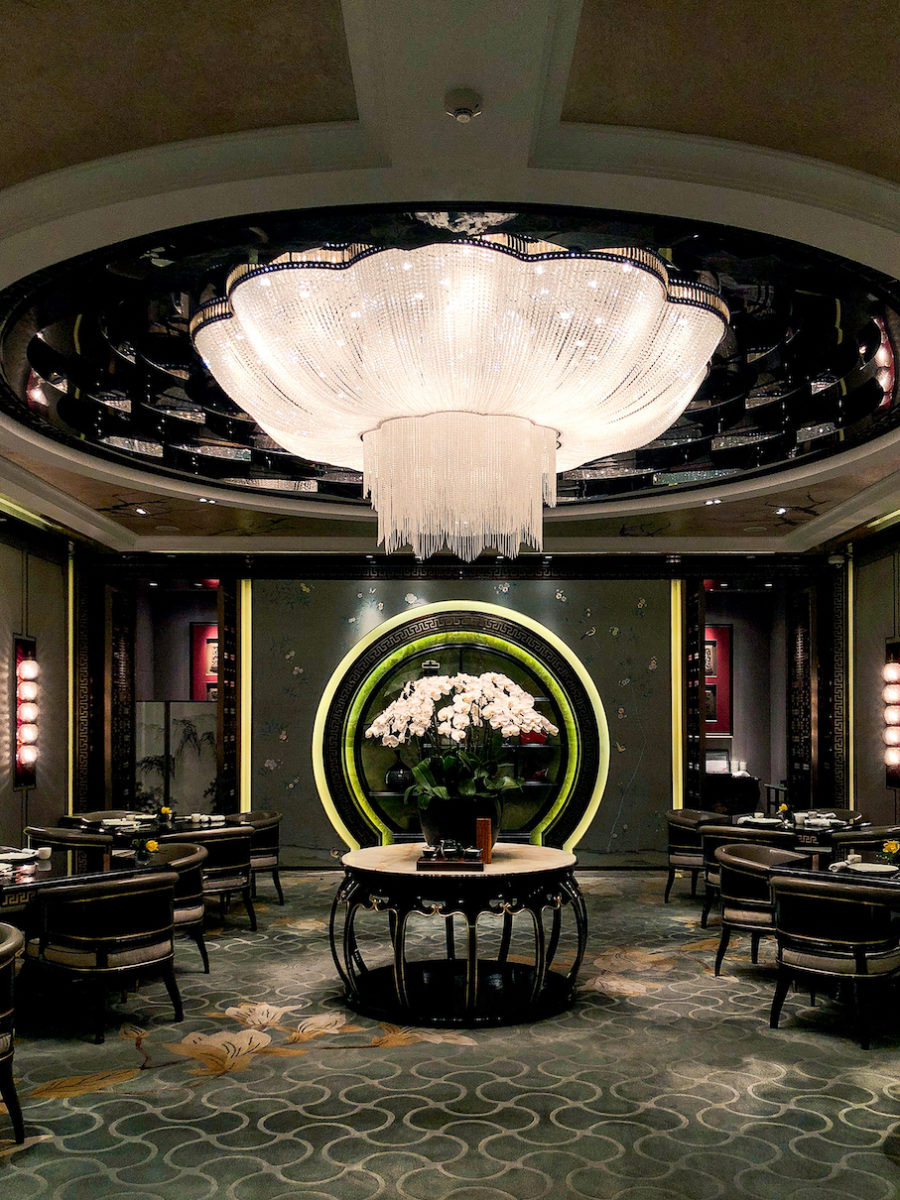 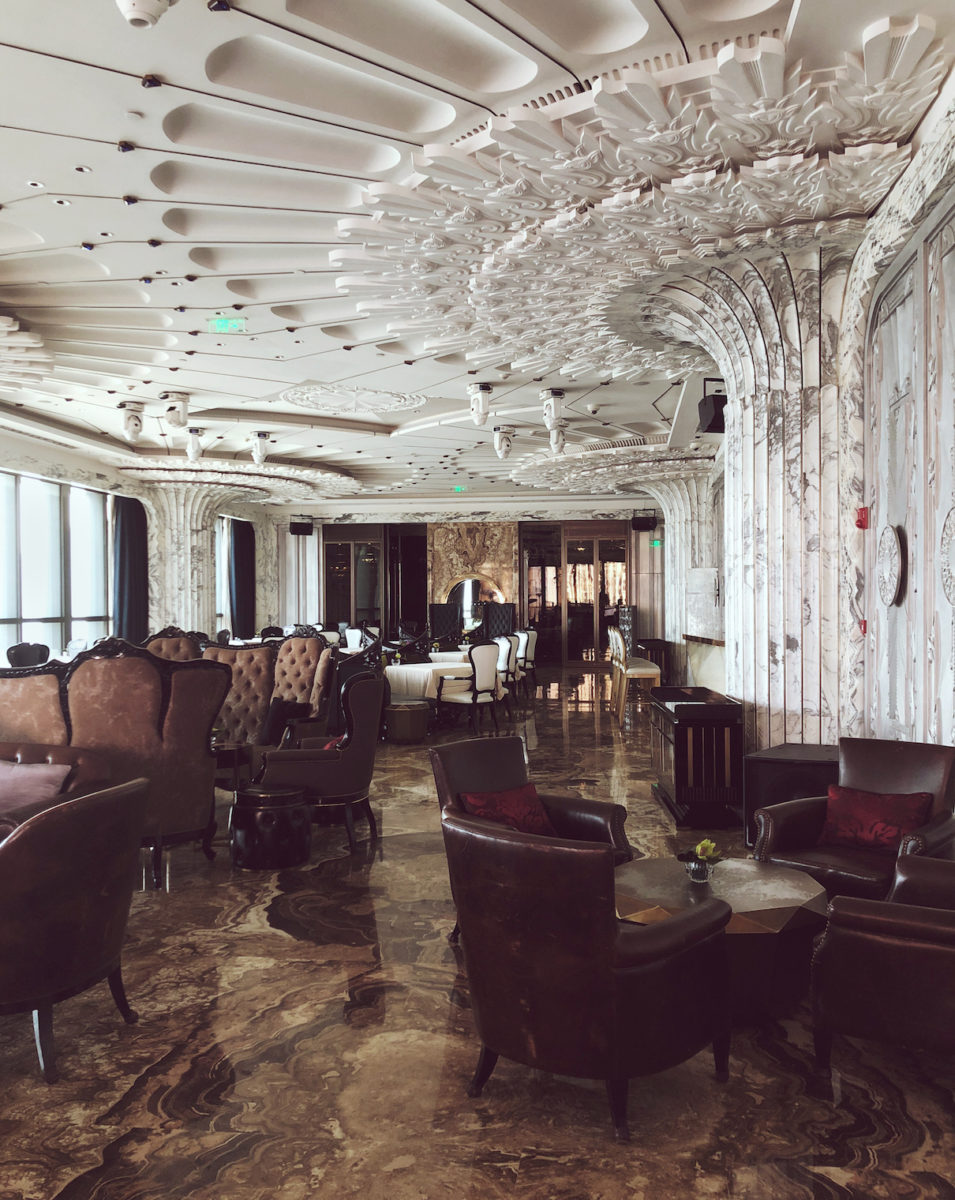 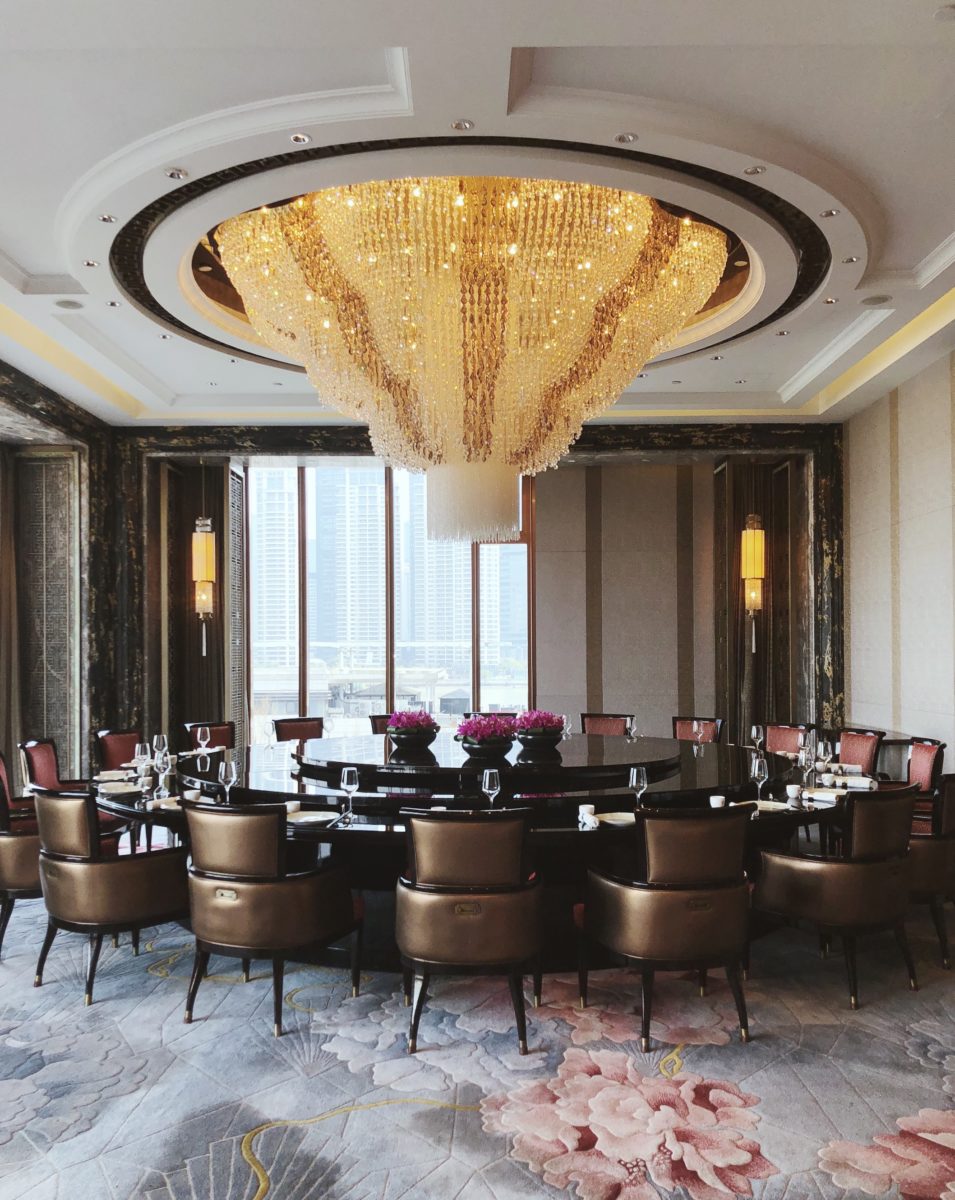 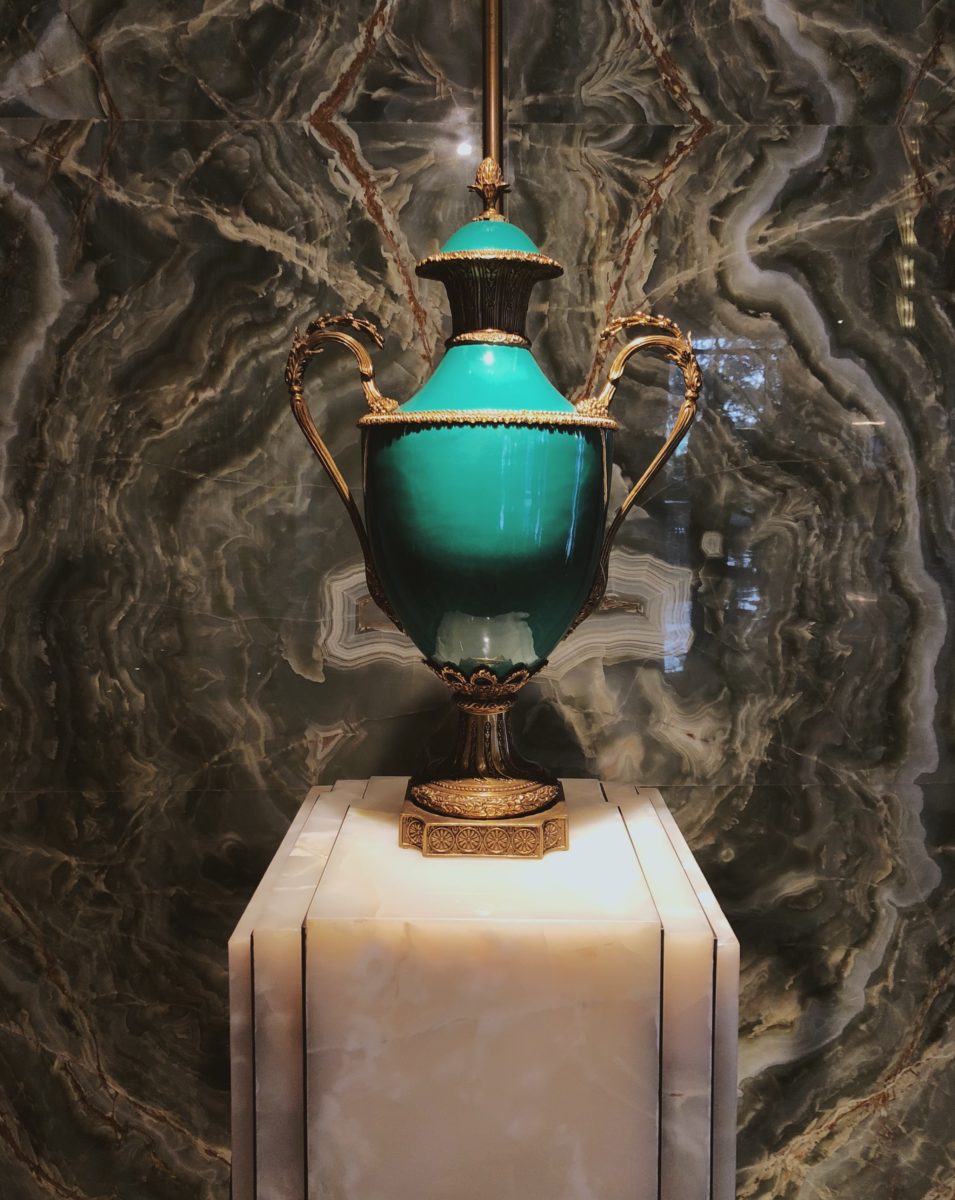 Marble isn’t reserved for the floors—it makes its way onto walls and tabletops too. As for the vase, jade is especially prized because it is believed to have healing qualities.

Stay at the Wanda Reign and you’ll forget the outside world altogether. Aside from occasional moments of either disappointing or mesmerizing modernity, the Wanda Reign is immersive to the point of feeling like time travel. In addition to 190 guest rooms, it has three restaurants, a spa, a members-only club with karaoke rooms and a smoking lounge, an infinity pool, and a rooftop bar, all in exquisite Deco style, down to jacquard wallpapers, swan-shaped faucets, and stepped crystal lamp shades. Gemstone palettes, and often literal gemstones, are the cherry on top.

Wanda Reign opened in 2016, but its manner is completely old money, and its enactment of Deco is unrivaled—because if you want to align yourself with wealth and power, if you want to be on the Bund, your aesthetic mandate is Deco.

You love glamour, plain and simple. You’re a history buff. You’re an adventurous eater. You like spice. 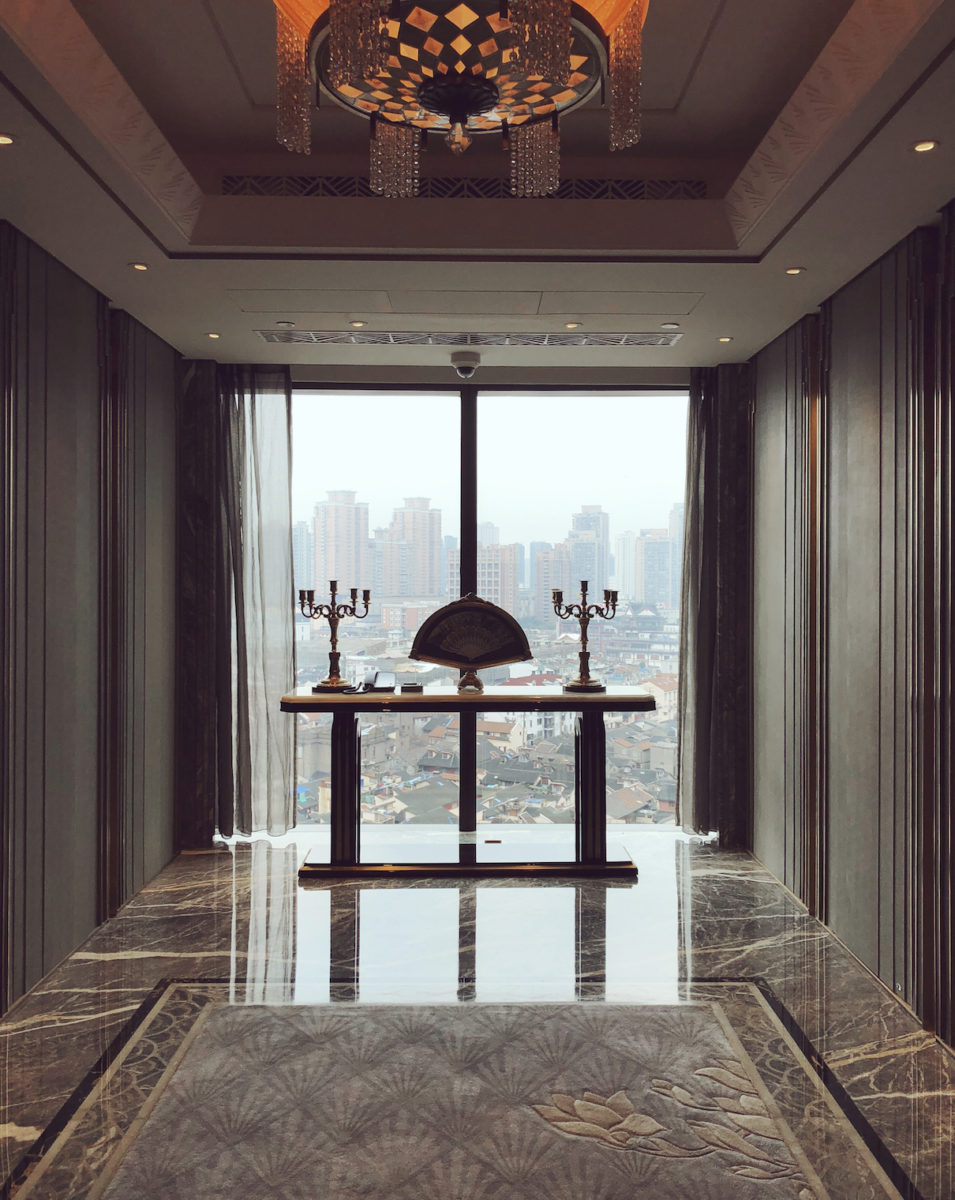 One of the most ancient districts of Shanghai is visible from Wanda Reign’s residential floors. 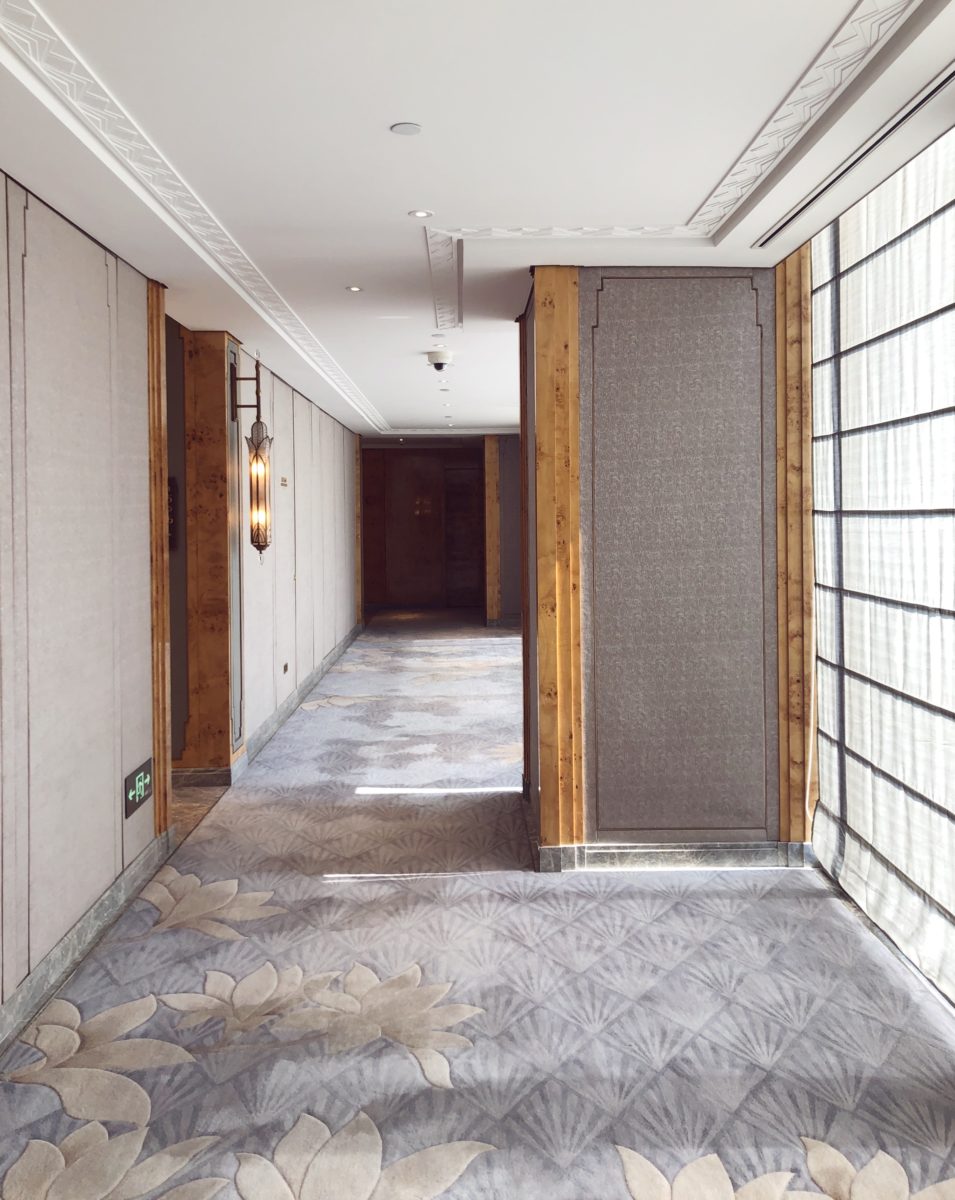 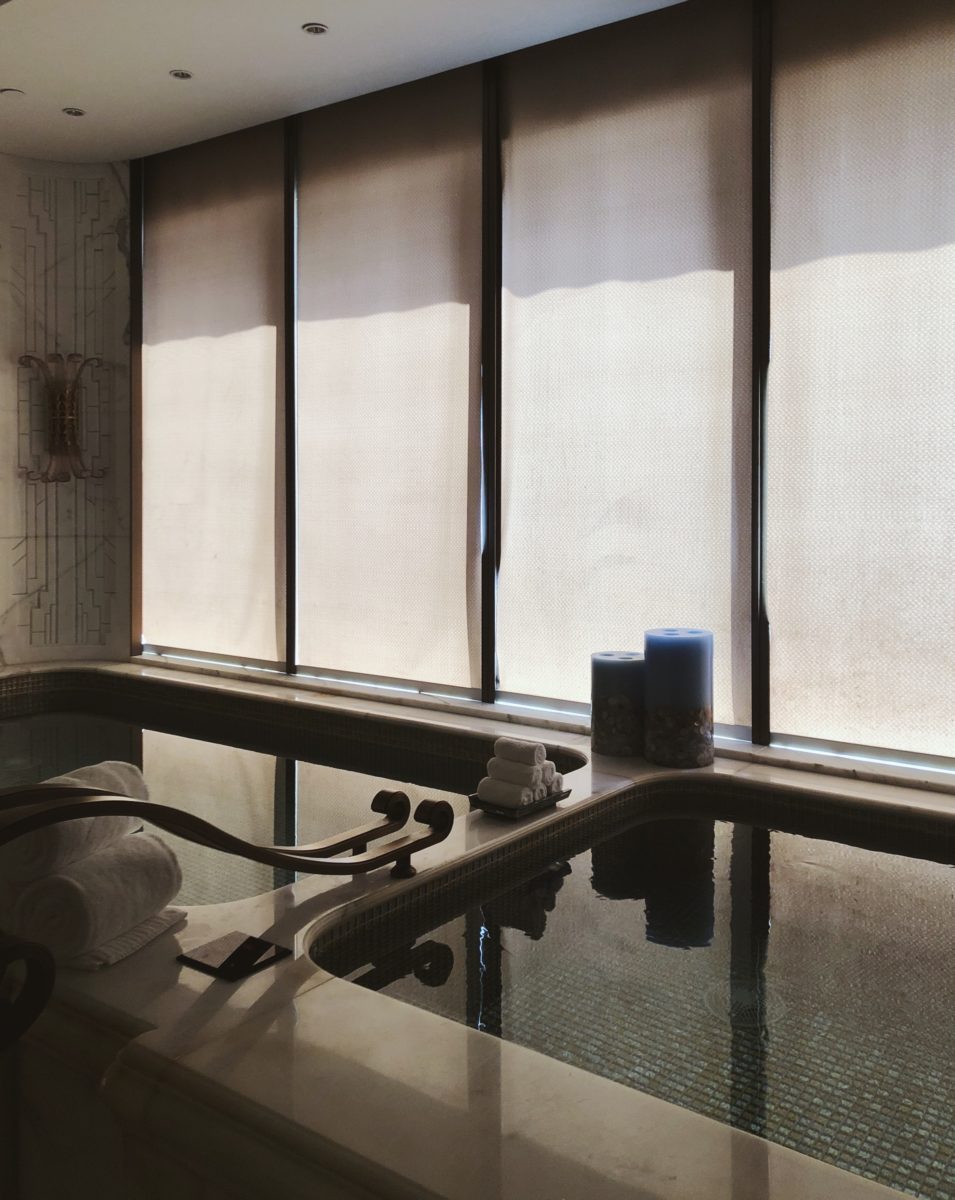 Restorative pools at the spa. 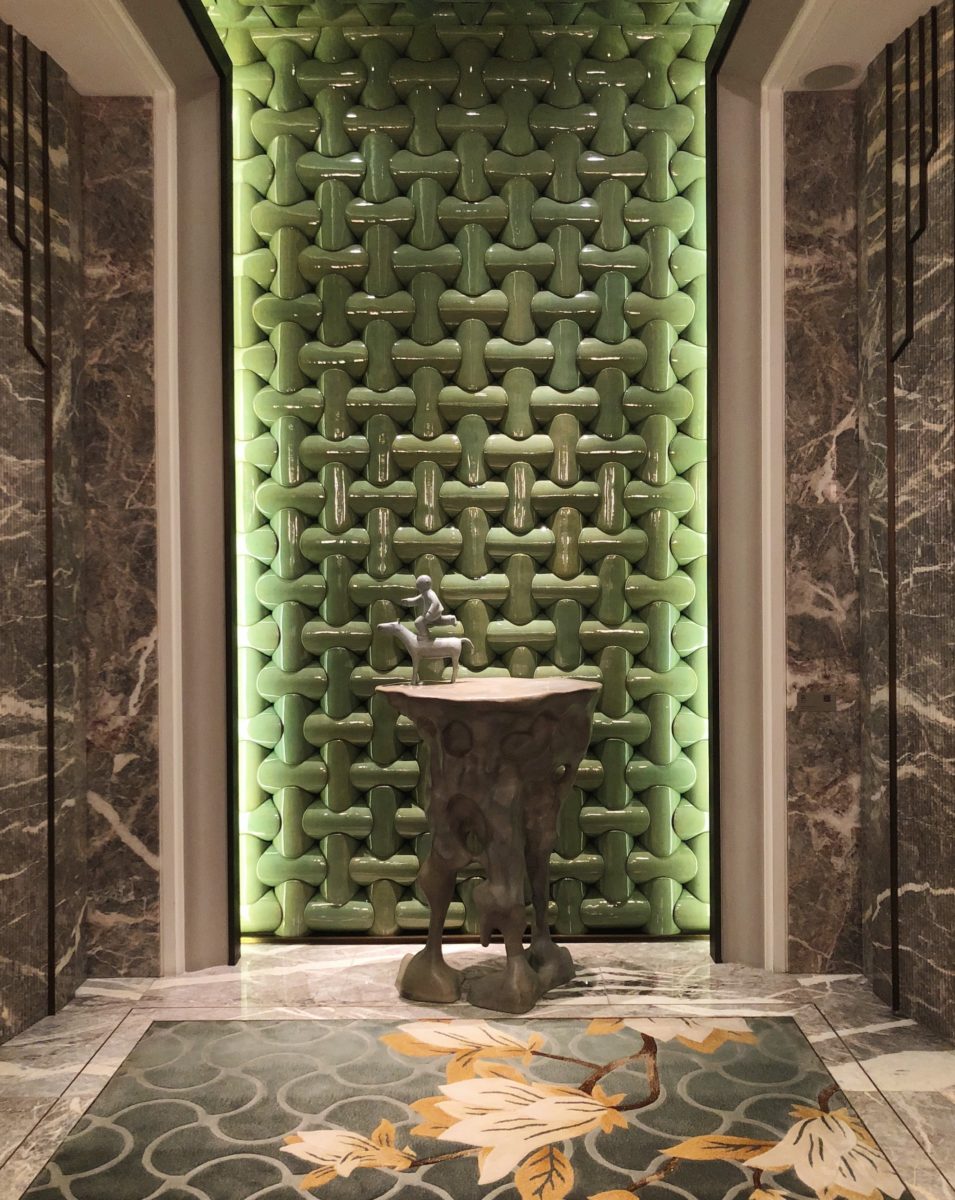 A sculpture adorns a waiting area near the elevators.

An international medley of business travelers and vacationers.

Stay flexible. Make a to-do list, by all means, but hold it loosely, and allow yourself to be surprised by the twists and turns your stay will take. Let your days unfold; don’t overfill them. Shanghai is so enormous, so lively, and so different than most destinations that a standard traveler has likely experienced, it will be a boon to let things play themselves out as they need to. Also, prepare yourself mentally for the occasional bad WiFi connection. 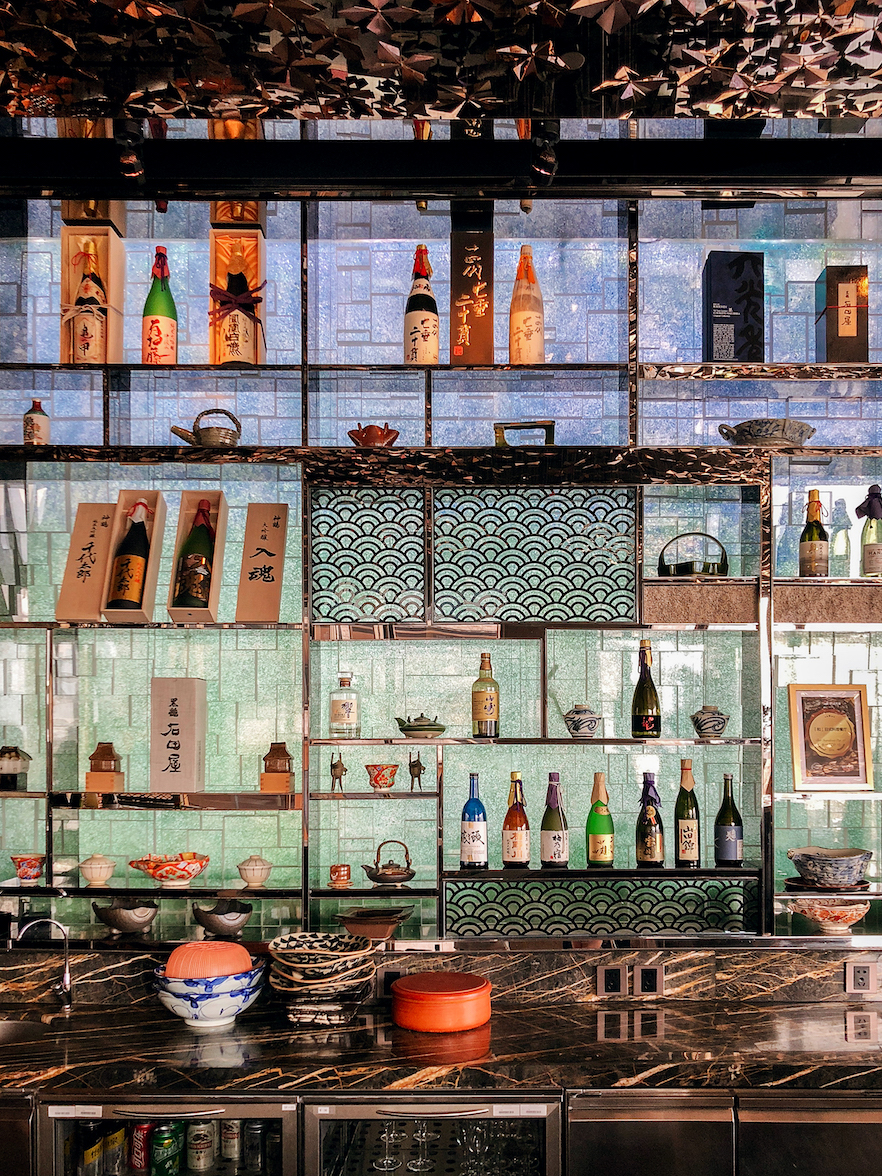 Behind the bar at He, the Japanese restaurant on the fifth floor. 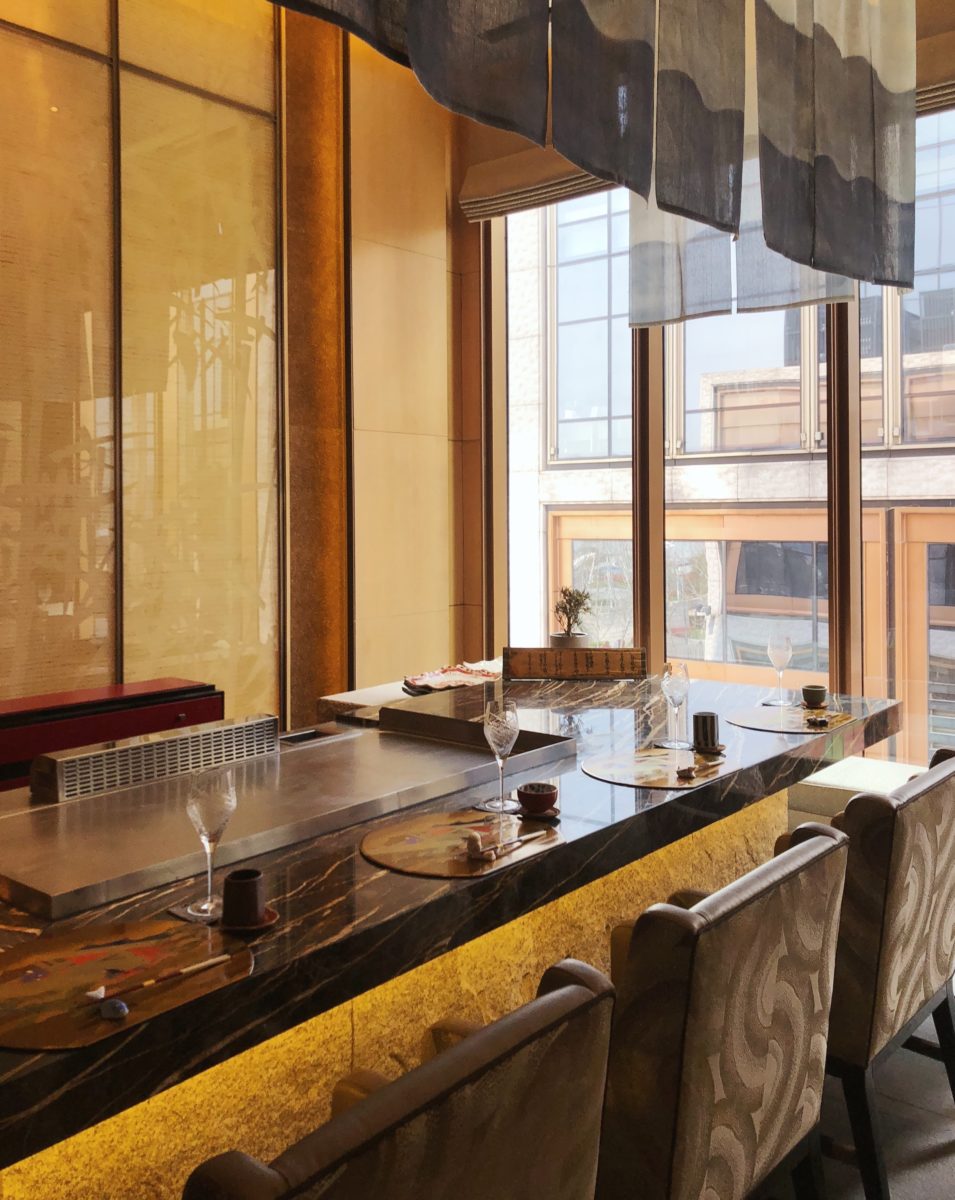 A private dining room at He. 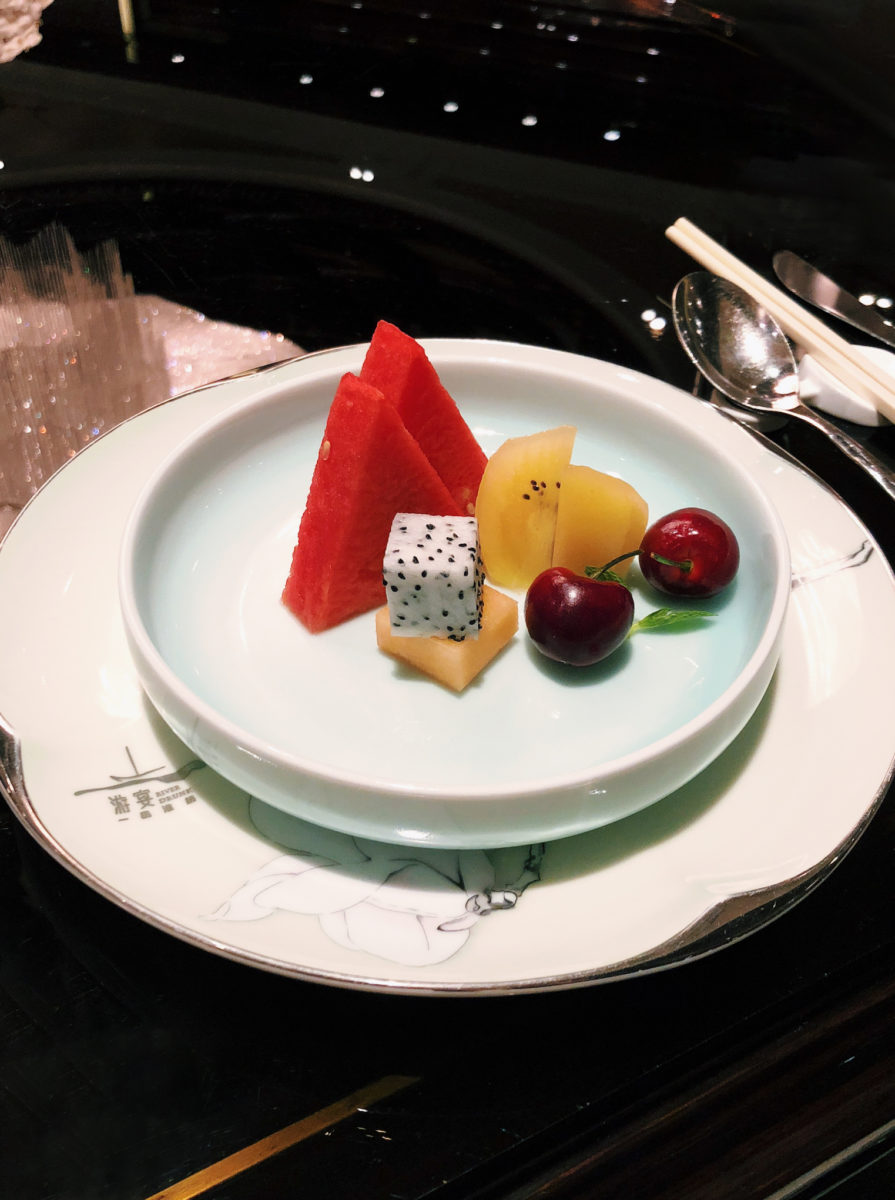 Download the WeChat and DiDi apps before you land in Shanghai. These two apps—one for communication, one for transportation—will prove essential as you navigate the city. Also, on a completely different note, don’t miss Wanda Reign’s complimentary breakfast. The range of offerings is as breathtaking as the decor.

Make a night of it on the Bund. Stop by the Waldorf Astoria for a drink at the Long Bar, a 39-foot stretch of mahogany countertop inside a large low-lit parlor. Then, at the Fairmont Peace Hotel Jazz Bar, catch a performance by the world’s oldest jazz band, whose original members have been playing together in this building since the 30s. The band takes the stage at 8 p.m. nightly.