At Little Choc Apothecary, chef’s nights are a hit, celebrating Brooklyn’s local gastronomy. And while it hasn’t been an easy road post-pandemic, this cozy crêperie is back and better than ever.

It’s been a difficult couple of years for the restaurant business in New York City. Those who have remained open are seeing numbers that pale in comparison to 2019, but that hasn’t stopped New York’s entrepreneurs from pushing forward and continuing to innovate. Take Little Choc Apothecary, located on a quiet street in Williamsburg, away from the hustle and bustle of nearby Bedford Avenue. As Brooklyn’s first fully vegan and gluten-free crêperie, opened in 2015, they’ve always served a niche community of health-conscious foodies. In 2022, as we adjust to living with the virus, Little Choc is overcoming the struggles of the last two years with the return of ticketed events and a brand new tea club. 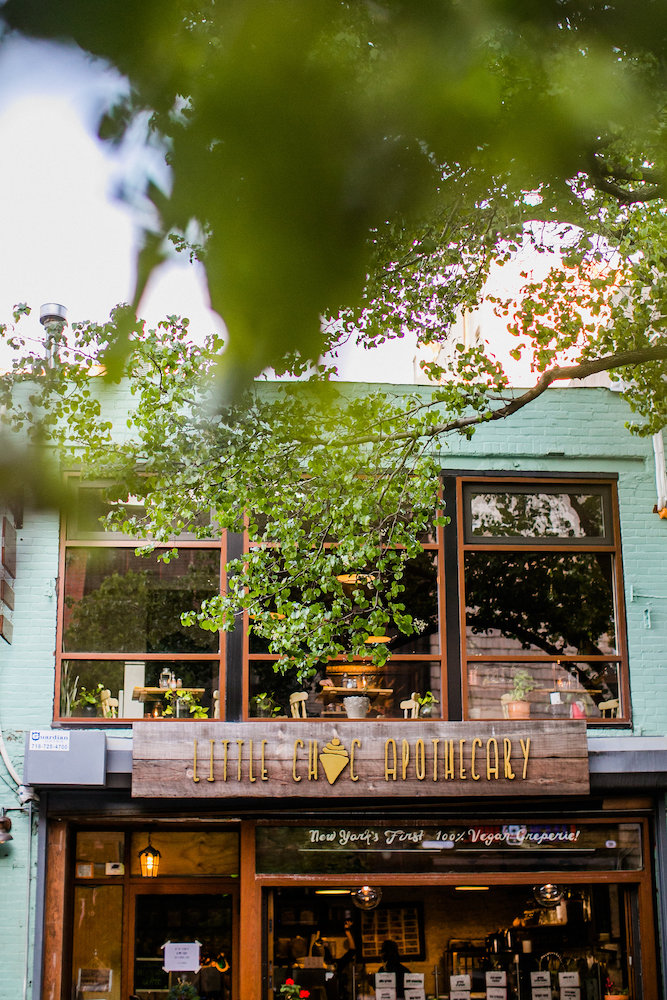 On the first floor of Little Choc is the open kitchen plus bar seating, while the second floor serves as a dining room with its famous wall of herbs and tea blends. Photo by Melissa Robin. 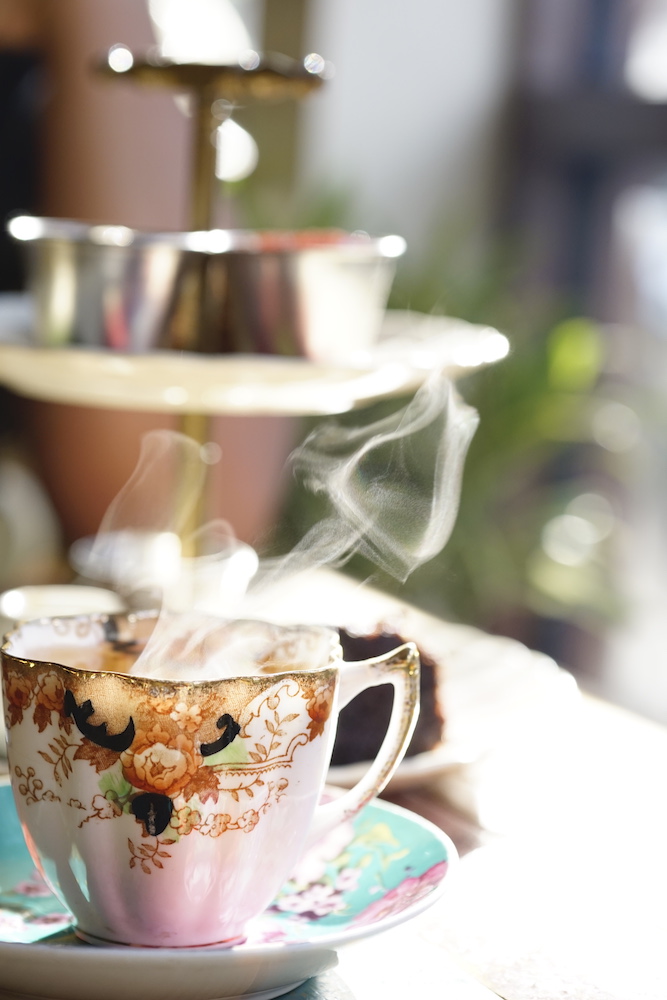 Kravets, Little Choc's founder, went for a rustic English countryside vibe when it came to the decor and china. Photo courtesy of Little Choc Apothecary.

This past Valentine’s Day, chef Kim Rojas prepared an exclusive five-course dinner for guests, celebrating the return of events at Little Choc. According to the restaurant’s founder, Julia Kravets, “The idea was to host vegan chefs and give them a space to throw a nice dinner.” The five-course meal began with a spring mix salad of golden beets, almond feta, coconut yogurt, blood orange slices, and an orange (and bee-free!) honey vinaigrette, followed by homemade sourdough bread and a cashew mozzarella and guava dip. The refreshing third course featured a base of lemon mashed potatoes stacked high with savory banana blossom chunks, cucumbers, roasted corn, and avocado, served chilled. The main course was a fresh pasta bolognese made of shiitake and oyster mushrooms and topped with fresh mint. Rojas saved the best for last with her favorite tres leches cake with strawberry coulis for dessert, inspired by her Latin roots. 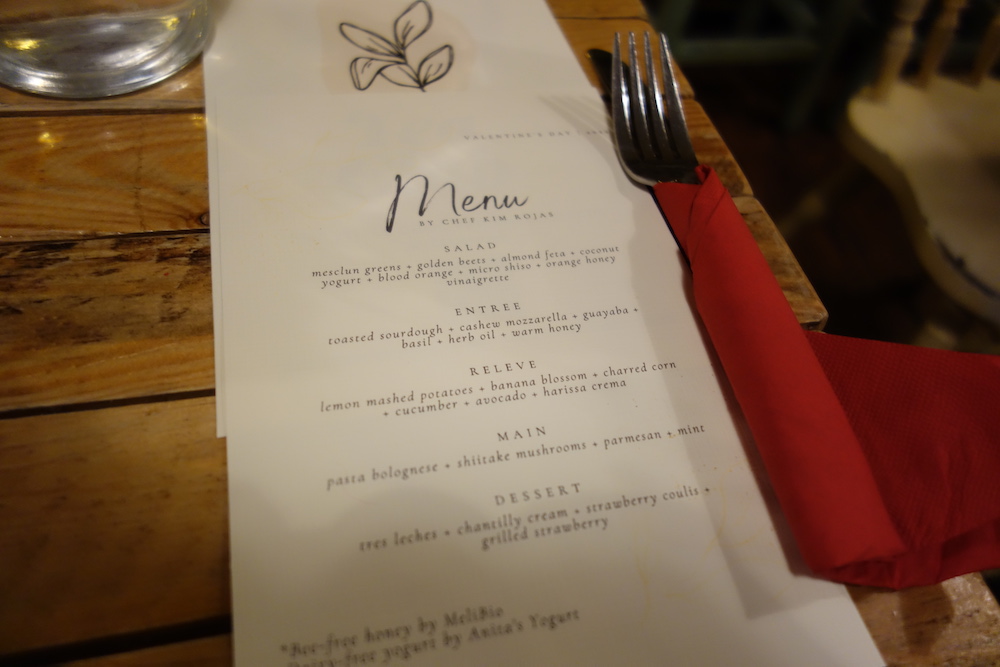 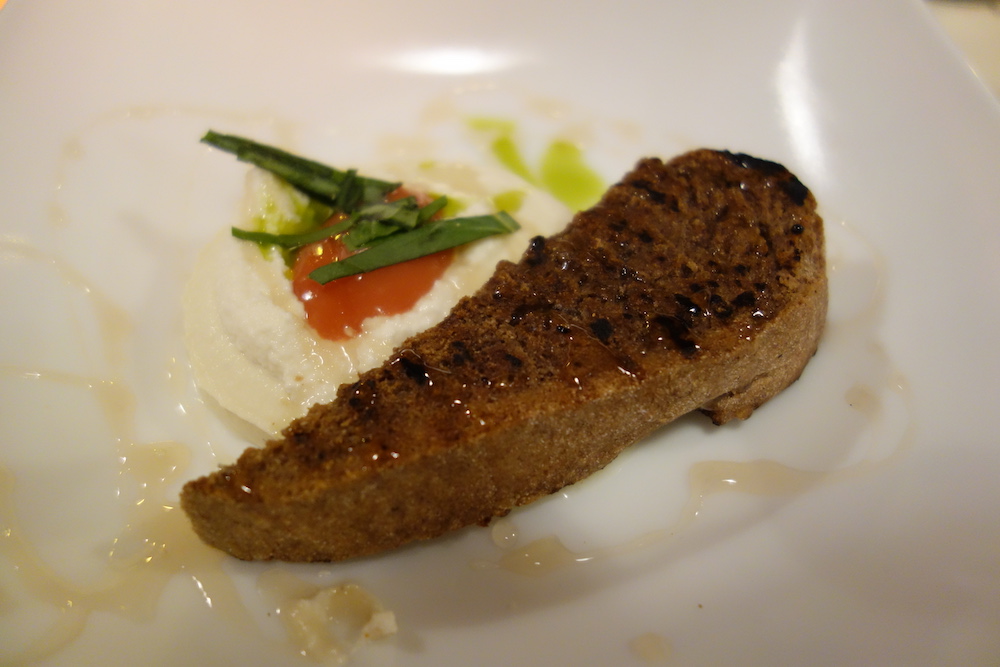 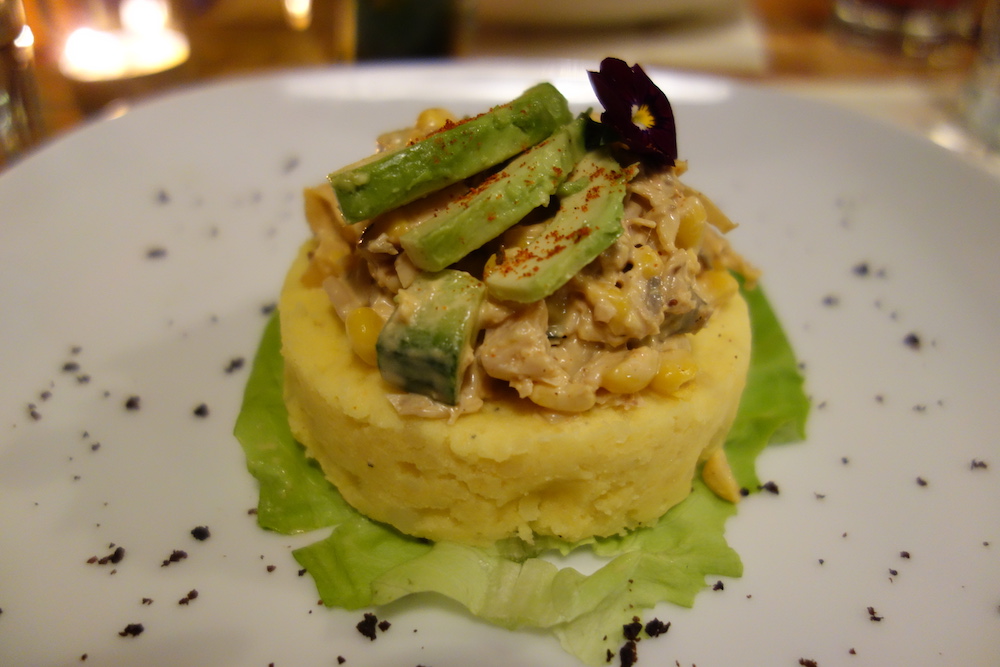 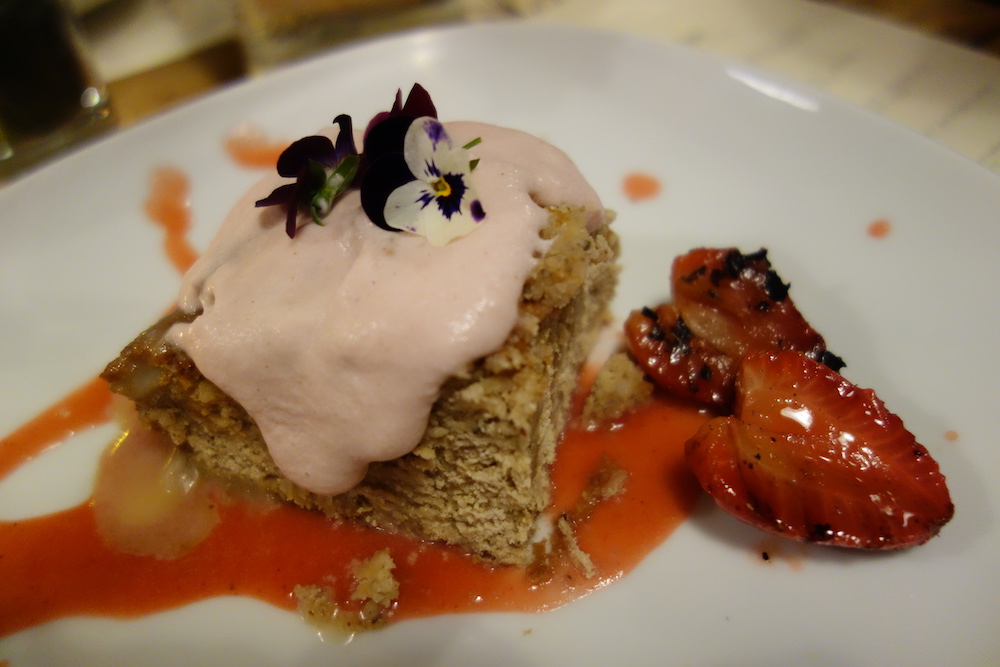 Chef Rojas's favorite course was dessert, where she served up a tres leches cake with strawberry coulis and grilled strawberries.

During normal business hours, Little Choc boasts delicacies like the pizza crêpe and the burrito crêpe, the latter of which is Kravets’s personal favorite. “I get it with the tofu scramble. Every time, I’m like ‘OK, I’m gonna get something different this time.’ But I’ve been eating it for almost eight years.” Pro tip: ask for a side of the homemade hot sauce to drizzle on top. There are more traditional sweet crêpes, too—try the “Newtella,” Little Choc’s homemade hazelnut spread (which gives the real thing a run for its money).

Kravets hadn’t planned for crêpes to be the main focus at Little Choc, but today they’re the star of the menu. “I was doing research on vegan crêperies and there were none. That’s why crêpes became the main focus. It was cool to open the first ever something. Originally, they weren’t supposed to be gluten-free, but one of my investors had Celiac’s, so I was experimenting with a gluten-free recipe. It turned out even better than the original!” The results are vegan, gluten-free, packed with nutrients yet light, and unbelievably delicious. 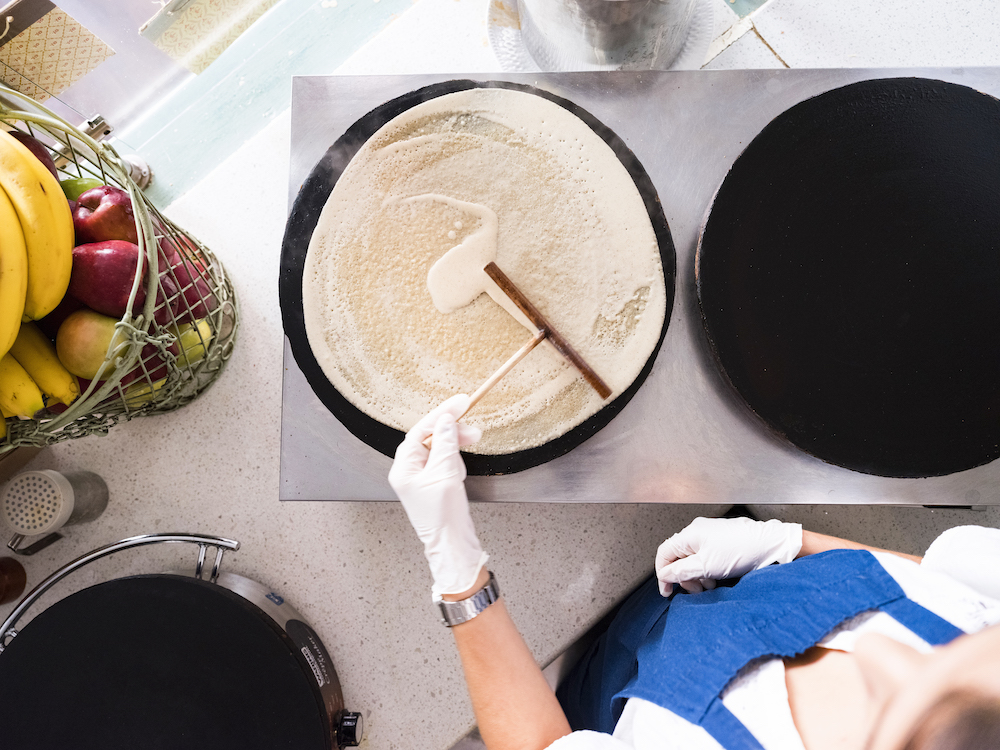 It's hard not to stare as Little Choc's chefs expertly swirl crêpe batter around the hot plates with a wooden stick. Photo by Patrick Yandoc. 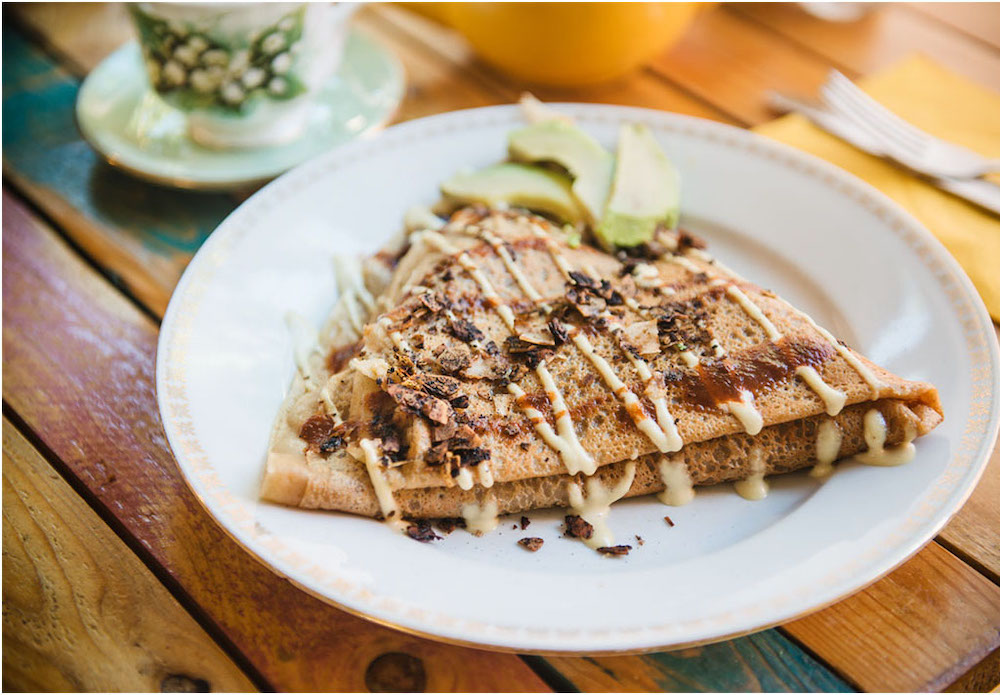 The burrito crêpe, Kravets's personal favorite, is sure to win over first-timers, vegan or not. Photo courtesy of Little Choc Apothecary. 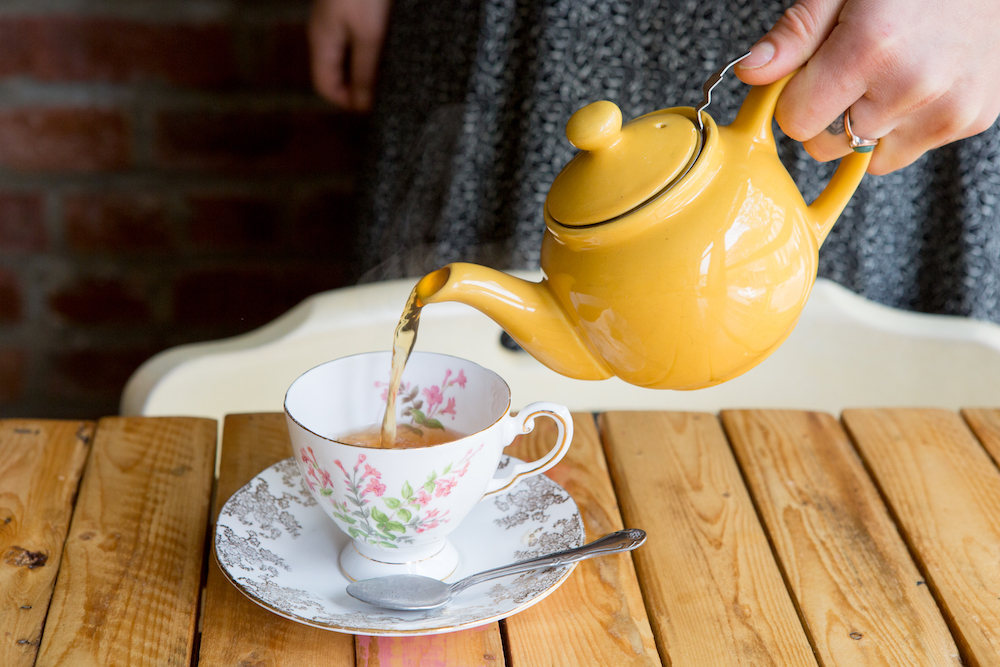 Little Choc offers more than just crêpes, though. Herbal tea is a huge focus of the business and a passion of Kravets’s: “I grew up in south Brooklyn and there was a local apothecary where I would buy herbs. I loved the experience of going to that apothecary and talking to the person at the counter about the healing properties.” Today, they have a wall of herbs and fresh tea blends at the ready, including the popular Peace Tea, a sweet blend packed with herbs that’s a solid choice for first timers. Interested (tea) parties should also consider joining Little Choc’s new tea club. “We’ve curated two different tea blends every single month,” Kravets explains. The blends are crafted according to the season: in the colder months, expect warming chai and spiced teas, while summer offerings might include refreshing, minty varieties. Coffee drinkers need not protest; there’s a full espresso-based drink menu at the brick-and-mortar as well.