The balcony with bougainvillea in three different colours. The fence with the barky dog. Details in my neighbourhood that I’d barely noticed became significant during Melbourne’s three-month hard lockdown last year. I live in an apartment with a view into other people’s living rooms, soundtracked by a neighbour learning Van Halen riffs on his new guitar, so the one-hour of allowed outdoor time was precious. 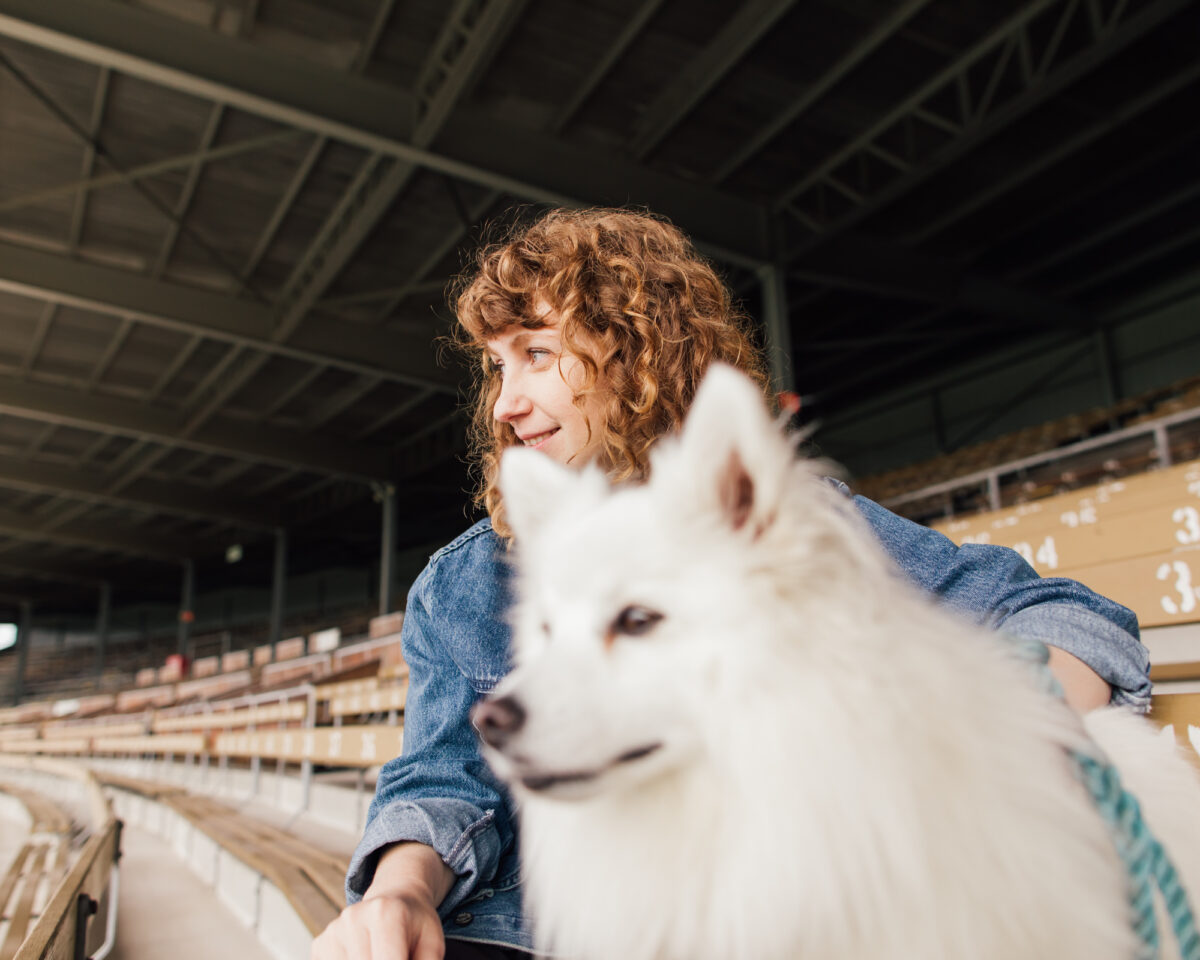 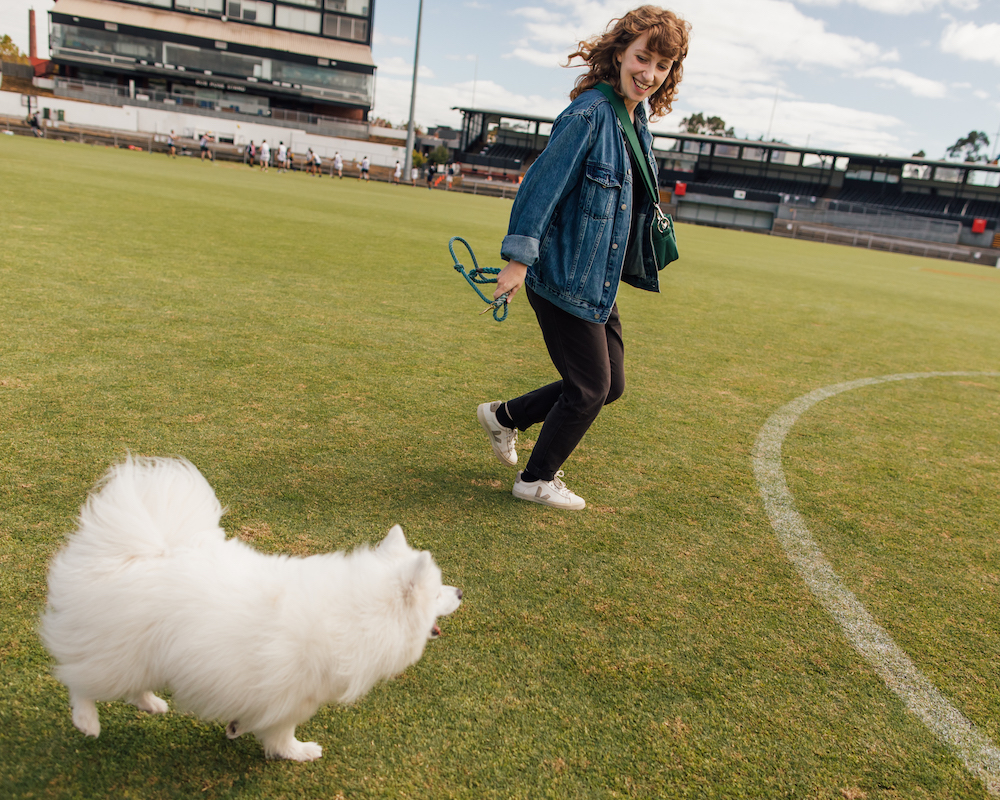 When the concrete and discordant guitar solos became too much, my dog Yuki and I would use our hour to cross the overpass to the pocket of activity around Victoria Park train station. For both of us, it was a time of mellowing. Everything slowed. Yuki, a temperamental rescue with separation anxiety, calmed with all the time we spent together. For me, a neurotic crime novelist, I was forced to ease my single-minded ambition.

Melbourne’s hard lockdown has been over for five months. We are, at the time of writing at least, a COVID-free state. But things aren’t the same as they were. I returned to Johnston Street to ask the people at my favourite places how they fared, and how they’ve changed. 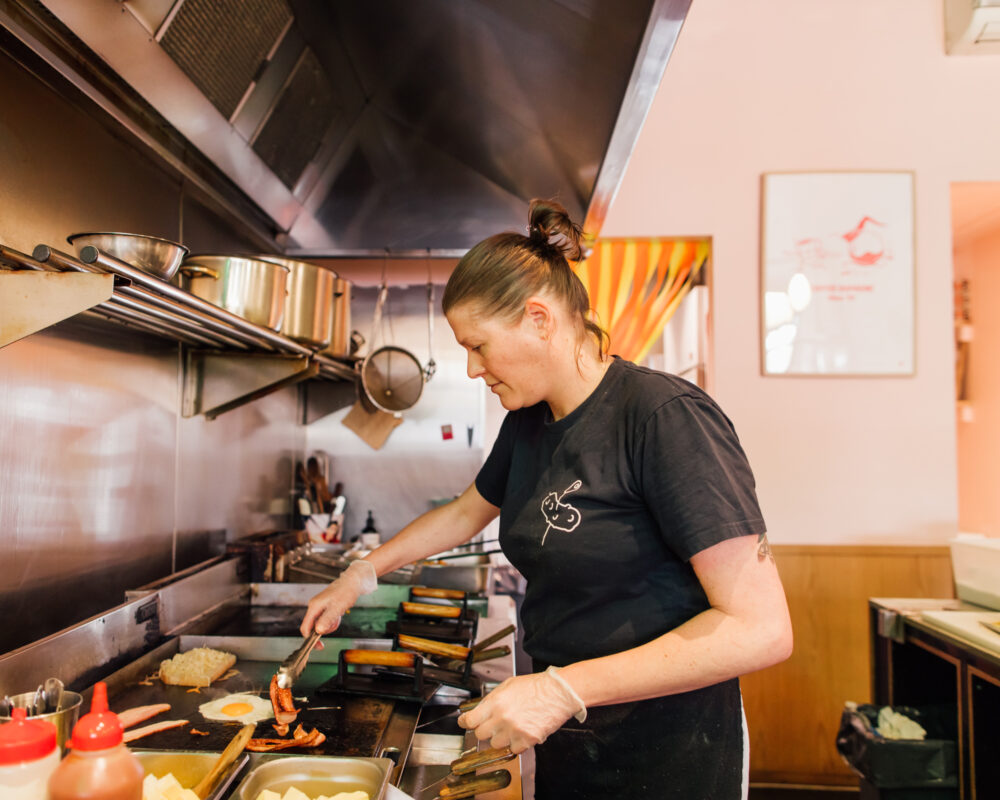 “We were one of the only places still doing food,” says Kitty Kelso, of Kelso's Sandwich Shop. 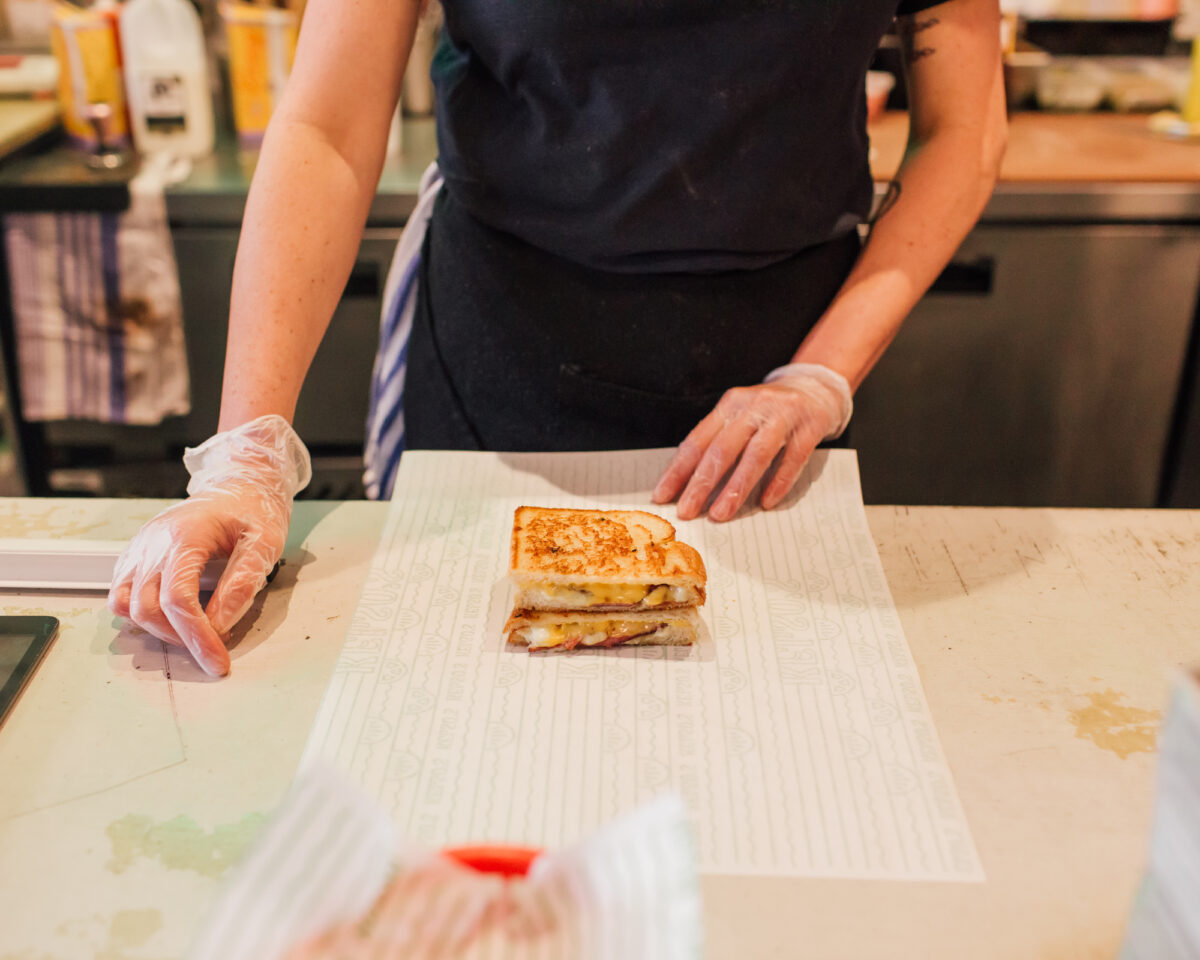 "A lot of the sandwiches have a bit of nostalgia behind them," says Kelso of her creations.

“The Abbotsford community was so supportive, especially during lockdown. I feel like we were really there for each other,” Kitty Kelso, owner of Kelso’s Sandwich Shoppe, tells me. We’re sitting out the front of the shop on the newly reinstalled outdoor furniture. It’s mid-morning on a Wednesday, and we are surrounded by regulars. A man sits across from us with three grey poodles in different sizes.

“We were one of the only places still doing food,” Kelso says, of the lockdown. “We shut everything down and just had this little window that we opened which we served through. Everyone seemed really happy to see us, and vice versa. It was this little connection that you have with the outside world. You know, a walk down the street, get a coffee and a quick chat, it was really nice.”

Kelso opened the shop in 2016 when her friends, Jon and Brendan who own Lulie Tavern down the road, noticed the area was missing a casual food option. Kelso based the menu on the sandwiches she used to make at home with her sister.

“We always used to make crazy sandwiches at home, all our friends knew us for it. A lot of the sandwiches have a bit of nostalgia behind them, things that we liked when we were kids—like the chip butty and the tuckshop salad sandwich that my mum used to make for me. It has all sort of evolved with what the area wants.” 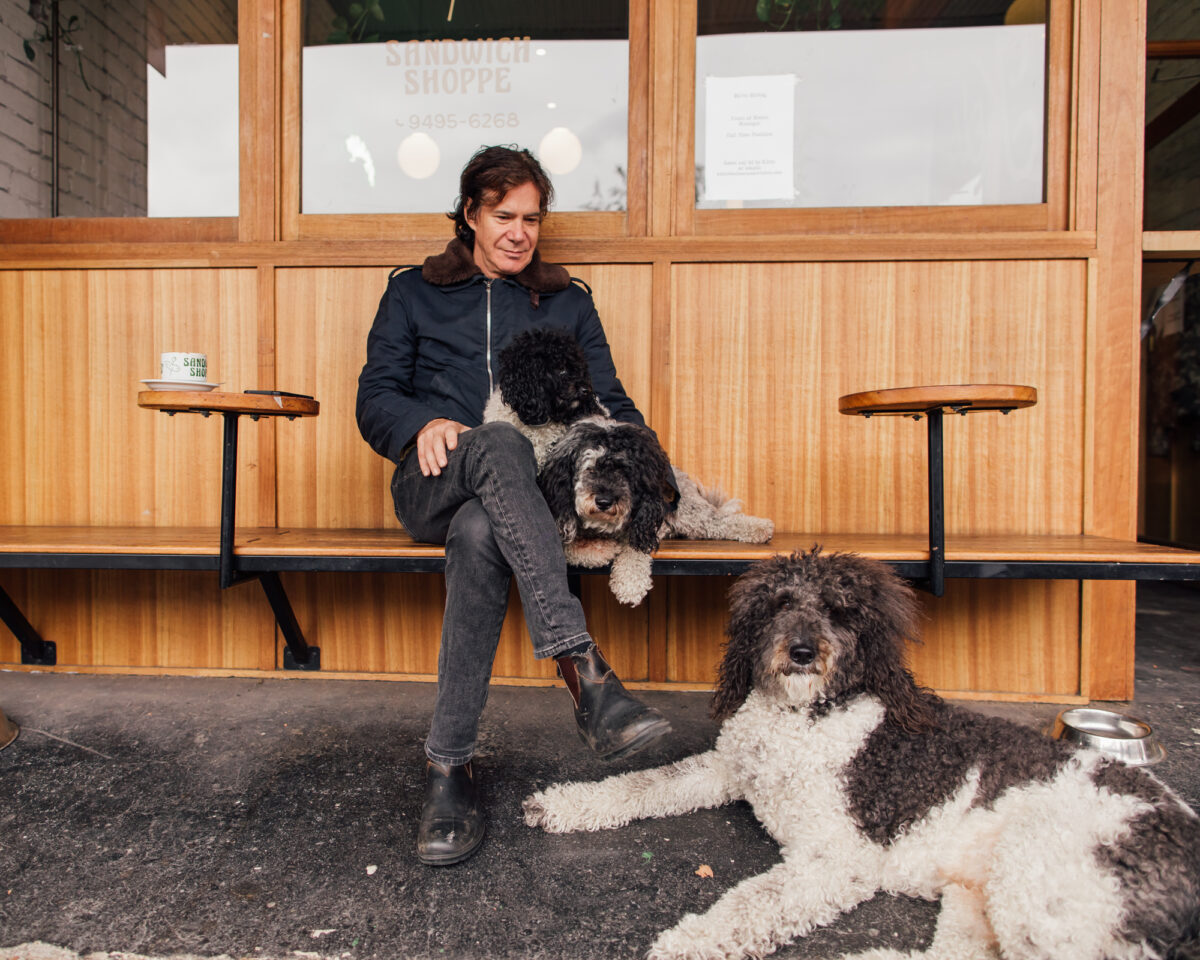 Francis, a local customer outside Kelso's Sandwich Shoppe, with his three poodles: Tuffy, Quinn, and Luke (in size order, from smallest to largest).

I ask her if things have changed for the shop since lockdown: “We don’t open seven days anymore. We started out three days, then four and now five and I think we’ll probably stay like this. Melbourne was such a twenty-four hour, seven days a week hospitality city. We were constantly chasing our tails. I think COVID has given us some space to think and change things. I think a lot of people have realized that other things are important.”

I’ve always wanted an excuse to go through the gates of FareShare. It’s a thriving kitchen garden that skirts the train line. The rows of flowering zucchini and purple chard are a stark contrast with the industrial area.

Finally, I get my chance. The garden gate is pulled open by the smiling Barbara Ormerod who runs the site. FareShare is a not-for-profit organisation that uses the fresh vegetables grown in this garden, as well as food “rescued” from supermarket wastage, to create meals for homeless shelters and women’s refuges. 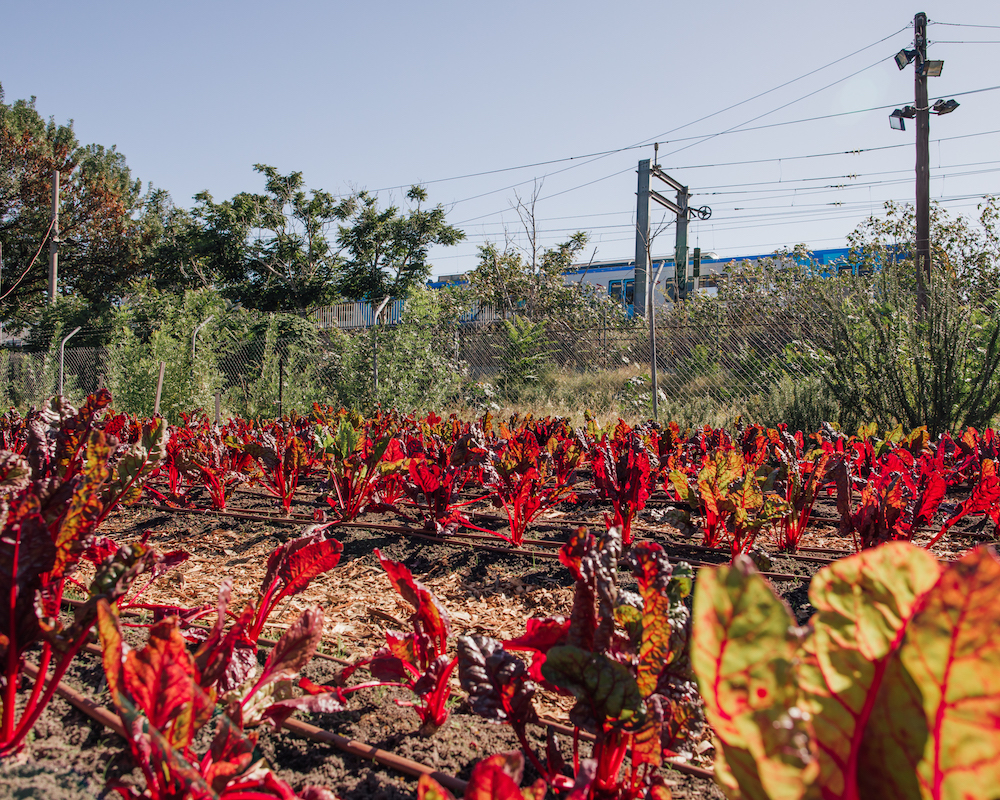 Lush rows of flowering zucchini and chard on display at the FareShare Kitchen Garden.

“This was a derelict site for quite some time,” Ormerod tells me as we walk down the rows. “Before that, a long time ago, it was used for goods trains. A lovely old man came to the fence the other day, and he told me that  when he was a boy he would feed the cows on that platform.” She points to a low stone platform, now covered in plant boxes.

During lockdown, none of the volunteers were allowed to work at the garden. Ormerod had a lot of weeding to do on her own. “I normally work three days, but then I had to work full time here. I got some of my family to join me, because they were from my household bubble. I was just able to keep on top of it.  Fortunately it was winter! But I was lucky to be able to be outside.”

As we walk through the garden beds she asks me to guess what each of the plants are. She tells us to rub the leaves of a bush with purple flowers. It smells tropical. Pineapple sage, it turns out. I’d never even heard of it. 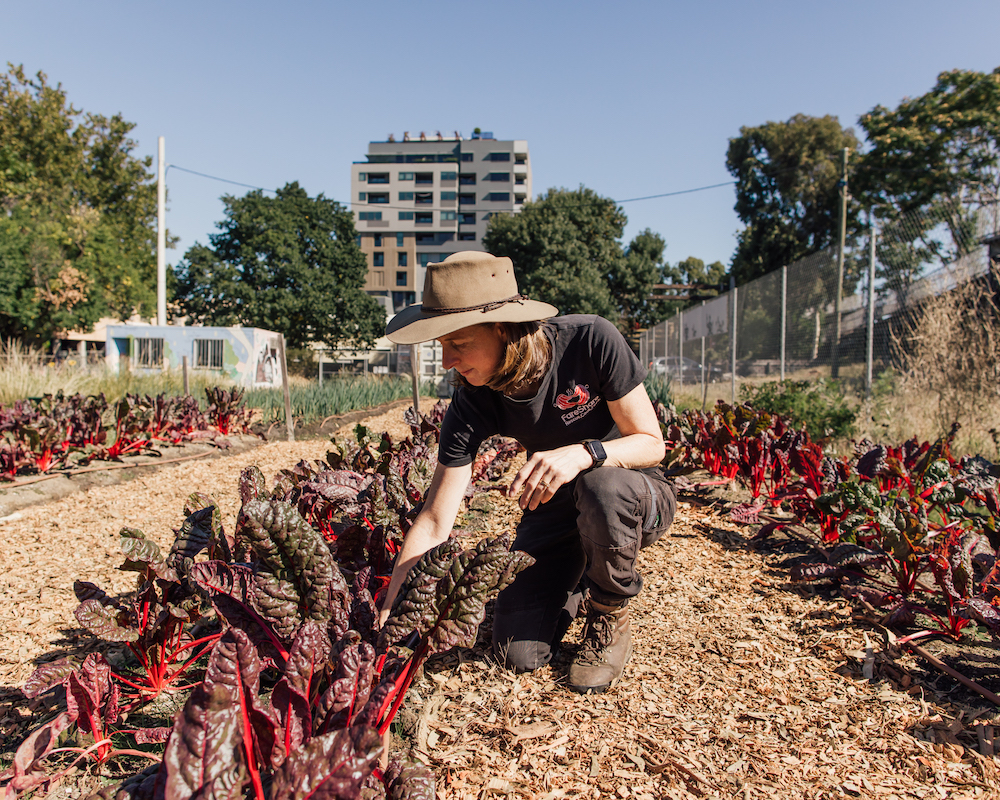 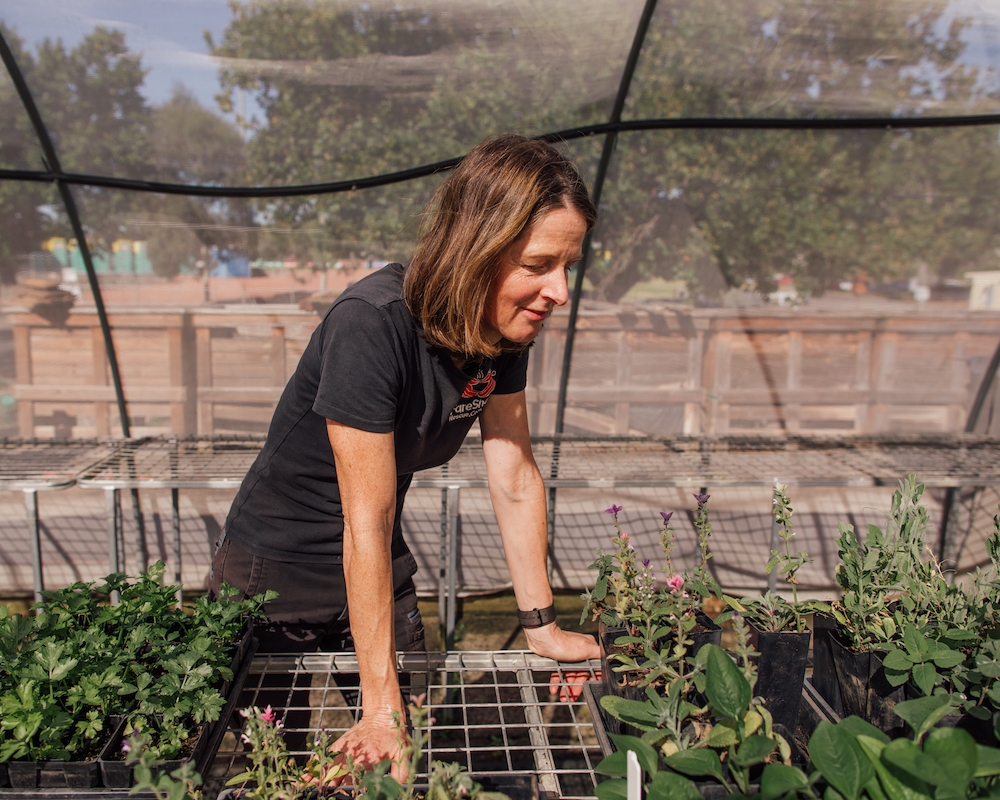 “COVID was a very hard time for everyone, especially in hospitality,” says Johny Dominguez. We didn’t want to stay at home and be sad. I couldn’t cook. I couldn’t interact with anyone. We just decided to open a little taco stand outside.”

Dominguez’s taco stand was a highlight during lockdown. Originally a fine dining chef, when he started at brewpub and bar Bodriggy a year ago he was able to design the kitchen and create the menu from scratch. His vision was to introduce traditional Latin American food to the community using local products. “To make a balance between authentic Latin American and Australian,” he says. But street tacos were never part of the plan. 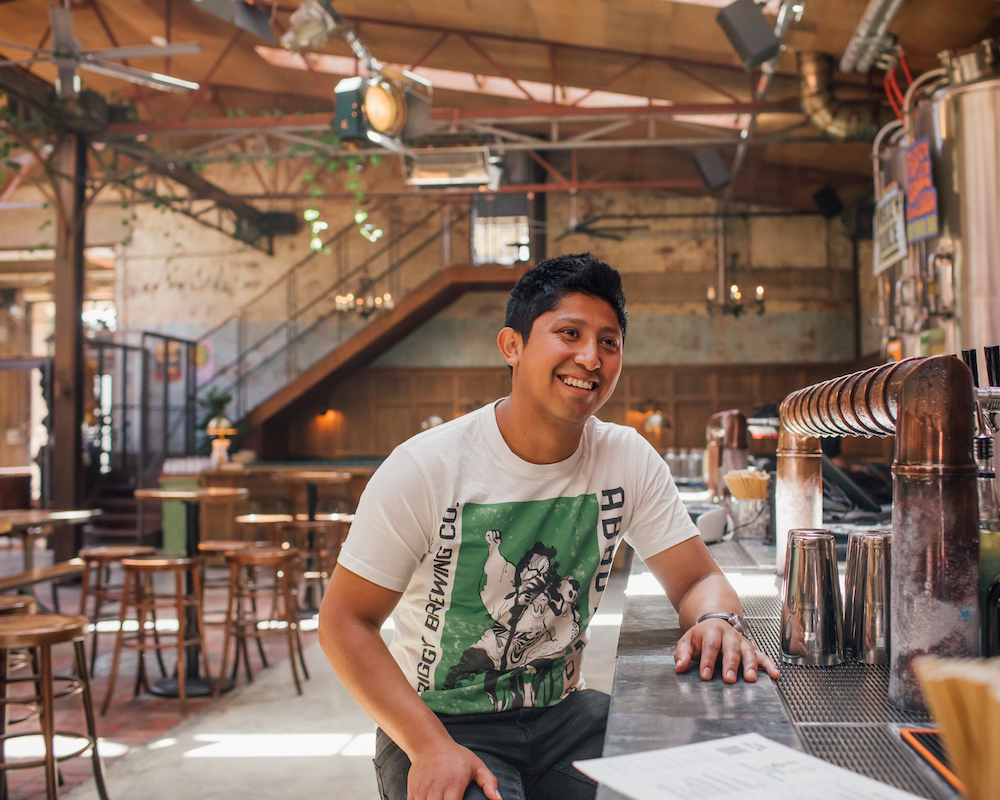 Bodriggy chef Johny Dominguez, who pivoted to open a taco stand during the lockdown. 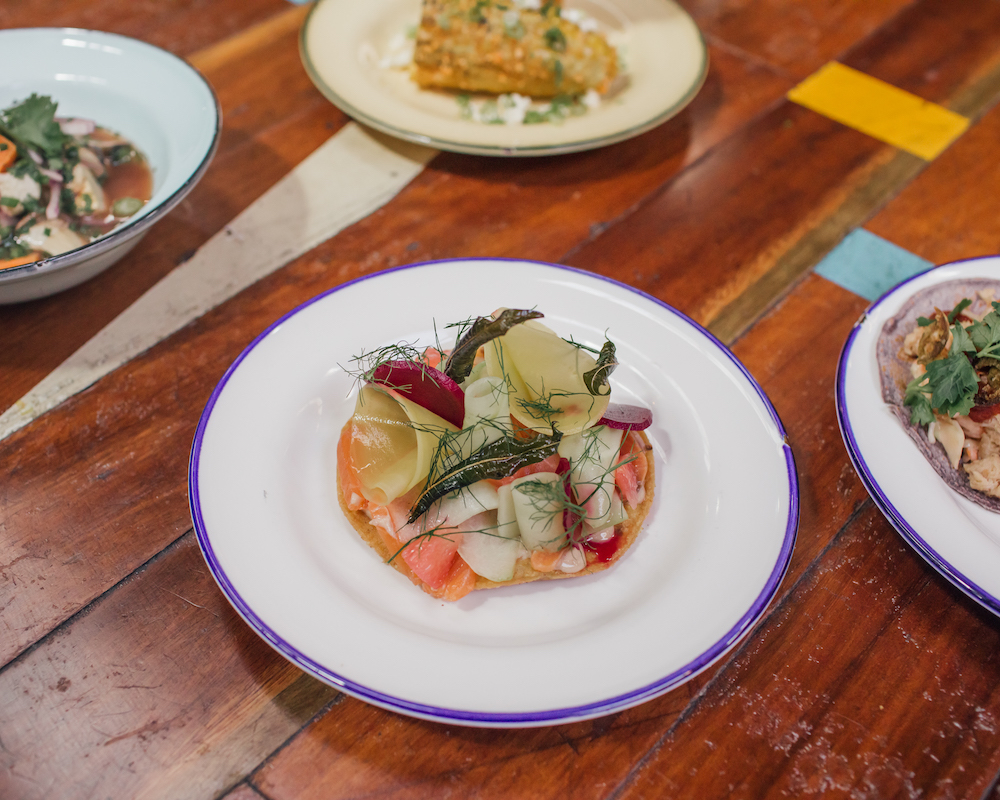 “We didn’t make money out of the taco stand, just enough to pay the bills. But it was accessible for everyone. It was nice to see the community come and talk to us and ask questions like how do we do the tortillas? How do we cook this? They saw the other side of the kitchen. We took the grill outside. It’s a half tonne—we needed ten people to lift it.”

Now, he’s back in the kitchen, making ceviche al nikkei and pollo asado. “We were only open a year and then—boom, we had to shut down. We were a bit sad and worried people were going to stop coming. But now, we’re actually busier than we were before.” 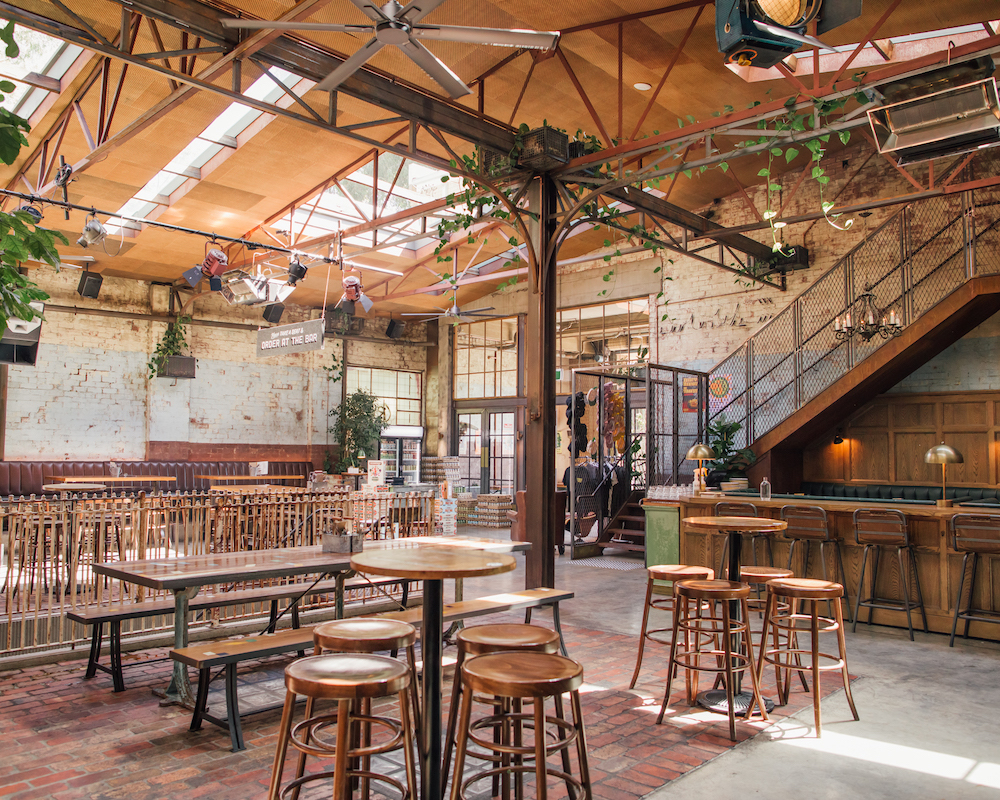 The interior of Bodriggy, a brewpub and bar that serves traditional Latin American food made with local Australian products. 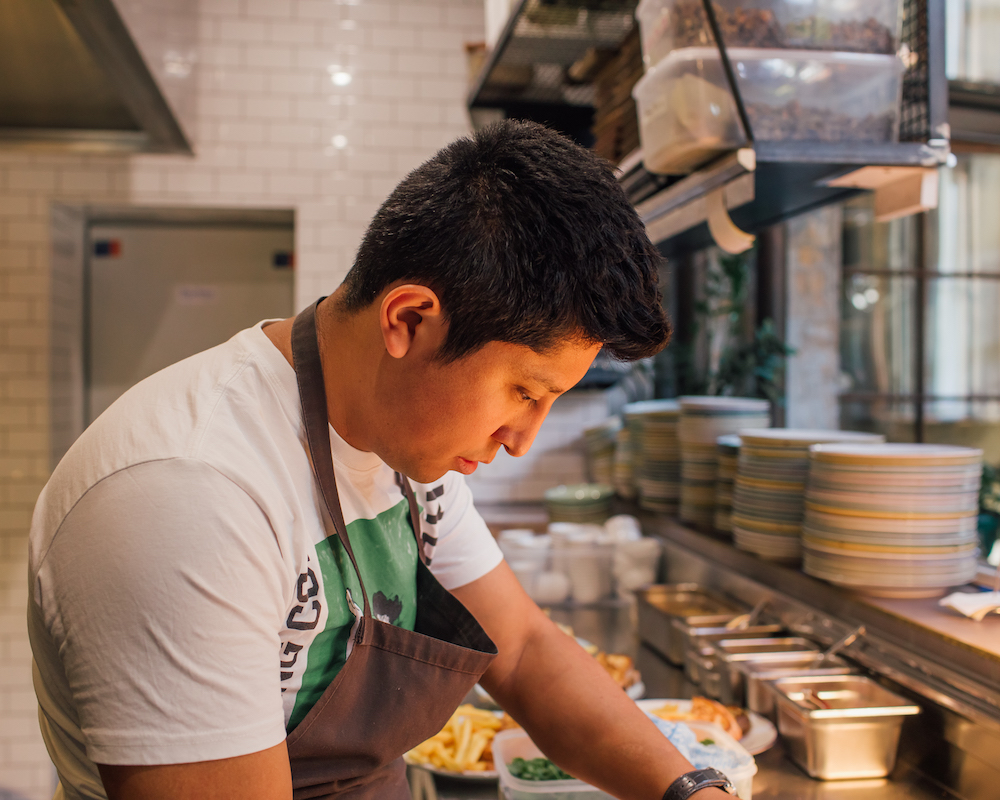 During lockdown, I’d take one of Johny’s cauliflower al pastor tacos to Victoria Park and sit in the stadium seating that overlooked the field. As someone with zero interest in sports, it wasn’t a place I’d ever think to spend time. Usually, the field would be scheduled for footy practice during the week, and matches on weekends. During lockdown, the place was taken over by the community. The seating was dotted with people enjoying Johny’s tacos or Kitty’s coffee, taking a few moments away from their four walls.  The field was like a festival. Socially distanced groups doing dance routines and tai chi. Families trying to get their kids to run off some energy. Dogs everywhere.

The sports are back now, but the community hasn’t quite relinquished their grasp on the space. Whenever I pass, I still see picnics on the grass. 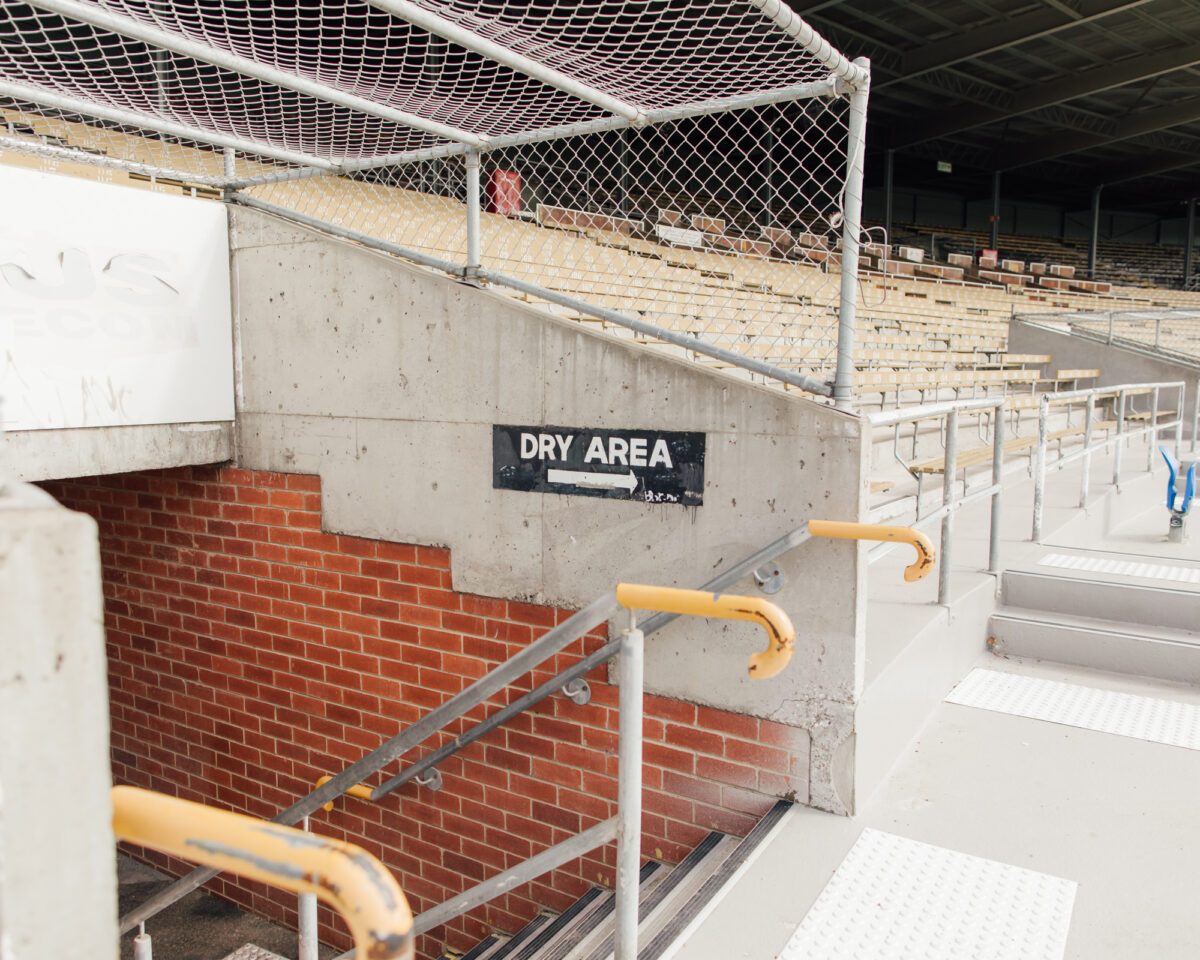 During lockdown, Victoria Park Stadium was taken over by socially distanced locals enjoying the empty space.

“It’s actually our sixth birthday this weekend,” Jon Farrell, the co-owner of Lulie Tavern tells me as we sit down at one of the round wooden tables.  “For our fifth birthday, we had a light up dance floor and smoke machines,” his partner, Brendan Kennedy, continues. “Then a week later everything was shut down. In hindsight it feels like the end-of-days party.”

Lulie is a lo-fi dive bar. Pool table, neon beer signs, Bruce Springsteen on the walls. “Everything is… without sounding like a loser, quite organic. A lot of the things on the walls are gifts from locals,” Farrell explains.  Kennedy points to a slugger bat above the taps, “In our first six months an older gentleman, lovely guy—” Farrell finishes the story: “he’d just come back from the States and he said, ‘Every good bar needs a bat, so I bought you one.’”

Hidden in the laneways of Melbourne’s CBD: 5 bars worth searching for → 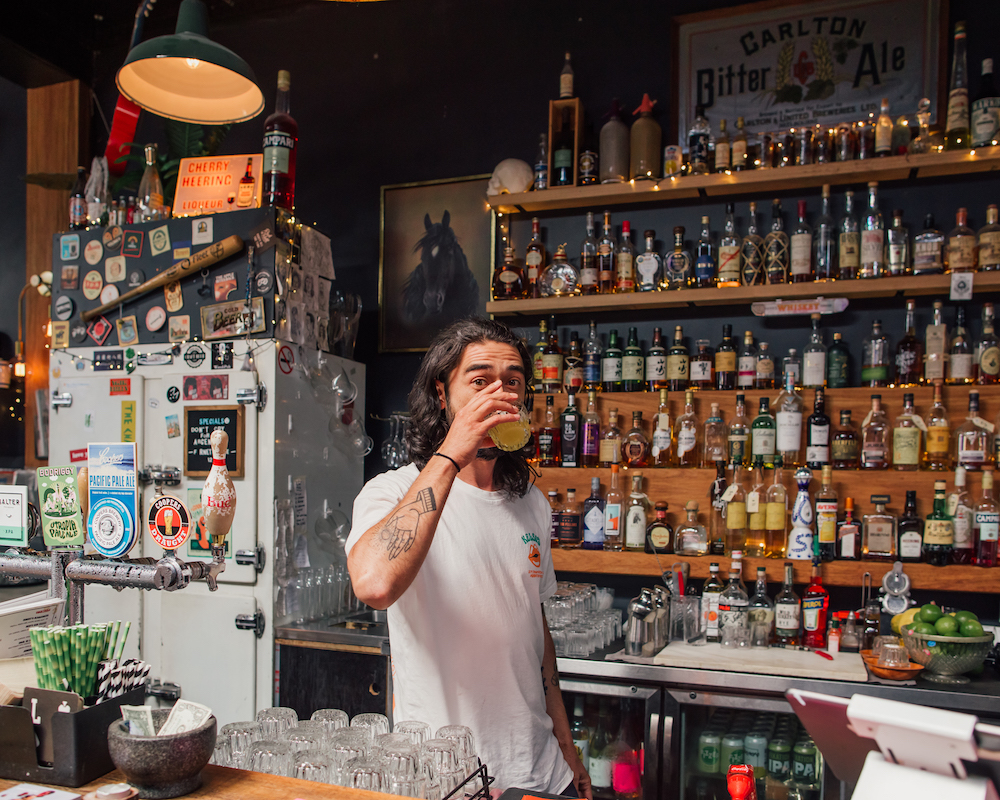 Jon Farrell, one of the owners of Lulie Street Tavern, behind the bar. 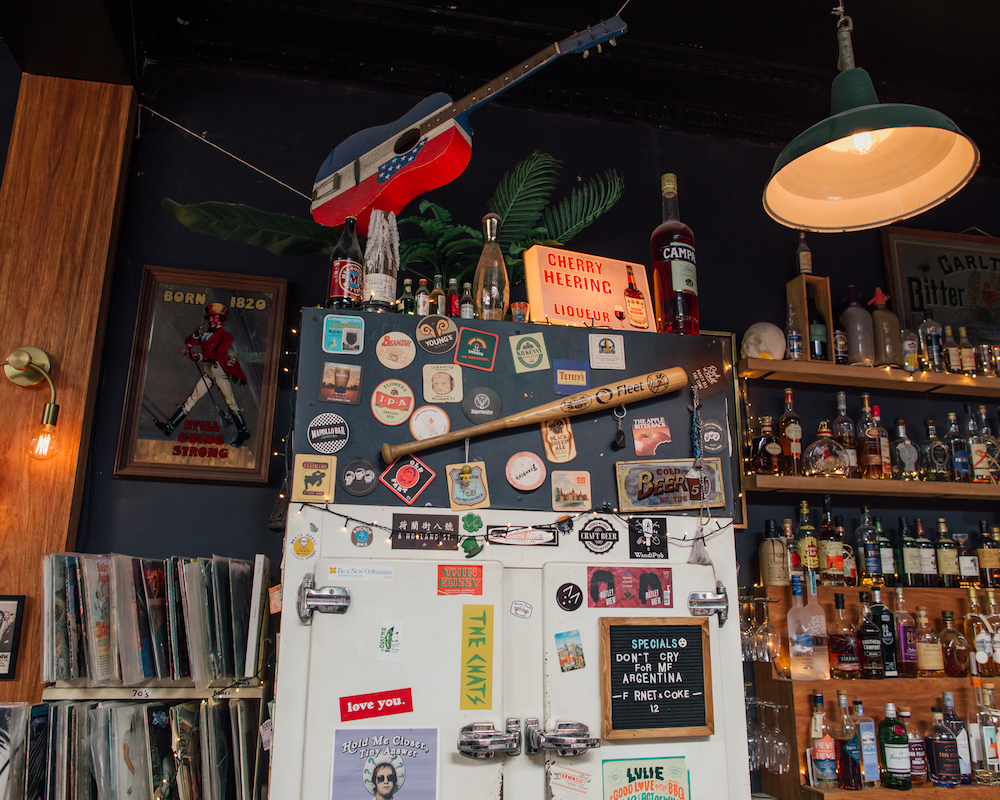 Lulie Tavern has become a mainstay of Johnston Street, celebrating its fifth birthday just before the pandemic started. 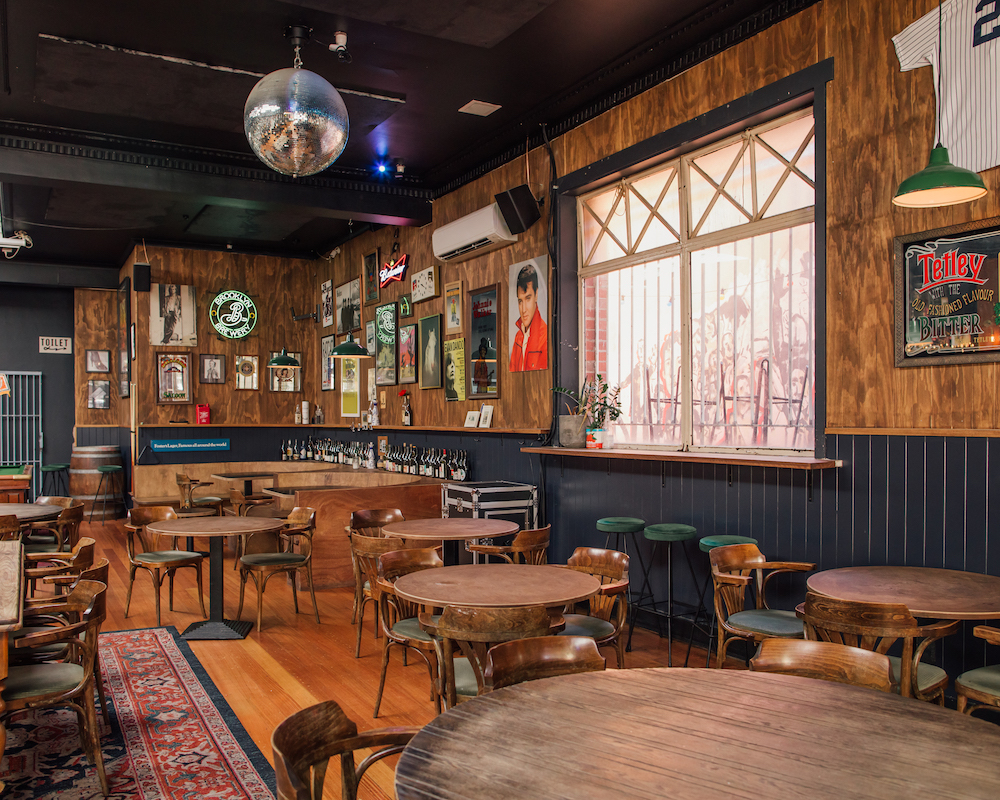 A look inside Lulie Tavern with its eclectic decor.

Forced to shut down for lockdown, Farrell and Kennedy came up with another way to serve the community: Van with a Can. Farrell explains: “We loaded Brandon’s van up with kegs and pulled up on people’s doorsteps and poured them a fresh pint.”

“It was a bit rogue,” Kennedy adds. “We didn’t have anything else to do. But it sort of took off. We got on Nine News.”

Now they’ve reopened, with a burger kitchen and a whole calendar of events featuring natty wine and disco nights, trivia and music. “We do a lot more live music now, which is something we’ve always wanted to do,” Farrell says. “Closing down for so long, it was a good opportunity to think: Were we happy doing what we were doing? What am I doing with my life? like everyone did. So we decided when we reopened we’d do more gigs and more events and more collabs with our friends. All the fun stuff that we had become a bit complacent about after years of running a small business.”