For this week’s travel crush, we look to Tbilisi, Georgia, the cultural melting pot of the Caucasus region, overflowing with ancient architecture and the world’s oldest winemaking culture.

The Republic of Georgia is comfortably nestled between Eastern Europe and Western Asia, split evenly by the Likhi Range and bordered by the Greater Caucasus Mountains. The mountains protect the small country from the cold Russian winds from the north, so the climate is pleasant and temperate. Georgia’s landscape includes marshes, swamps, rainforests, eternal glaciers, and arid plains. Impressive for a country not much bigger than West Virginia. (For another comparison: the state of Georgia is about twice as big as the country.)

Growing up in Queens, the cultural melting pot of NYC, I often enjoyed homemade khachapuri at my Georgian friends’ houses. I can still taste the flaky pastry dough and salty, melty cheese my friend’s mom would prepare for us by hand. We all had the Russian language in common because my mom is also from the ex-USSR. I loved finding “outsider” commonality with other first-gen American kids, and I never felt out of place because every family on our block had a different, vibrant culture to share. Now in my mid-20s, I’m interested in visiting more of the Soviet satellites to learn more about our shared history.

The Local’s Guide to Tbilisi, According to a Gallerist → 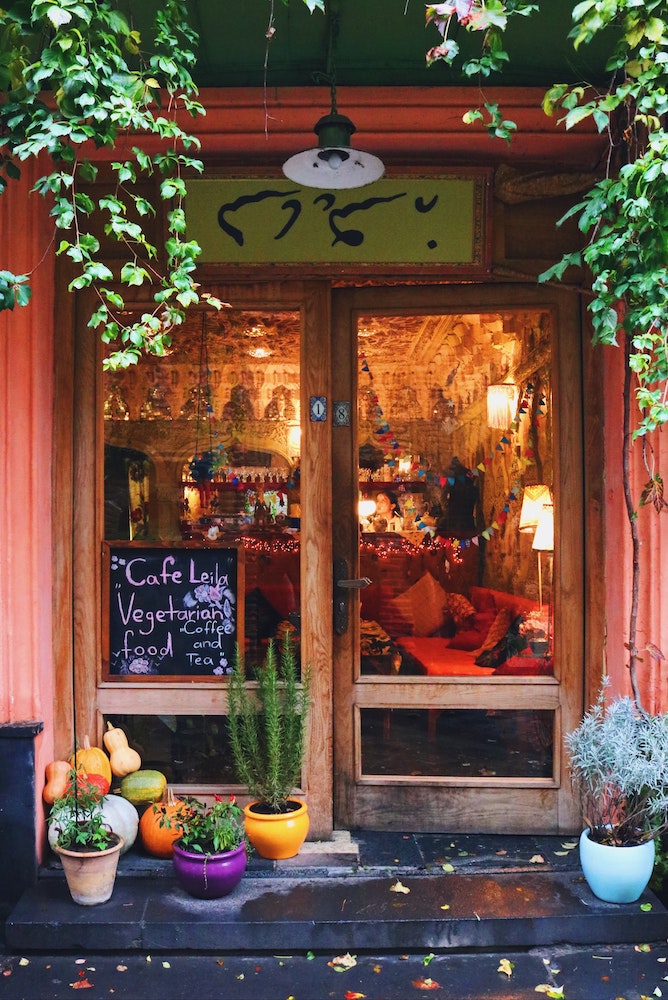 If you're traveling with vegetarians or just looking for a healthy option in Tbilisi, check out the popular Cafe Leila for veganized renditions on classic Georgian delicacies. Photo by Mark Billante. 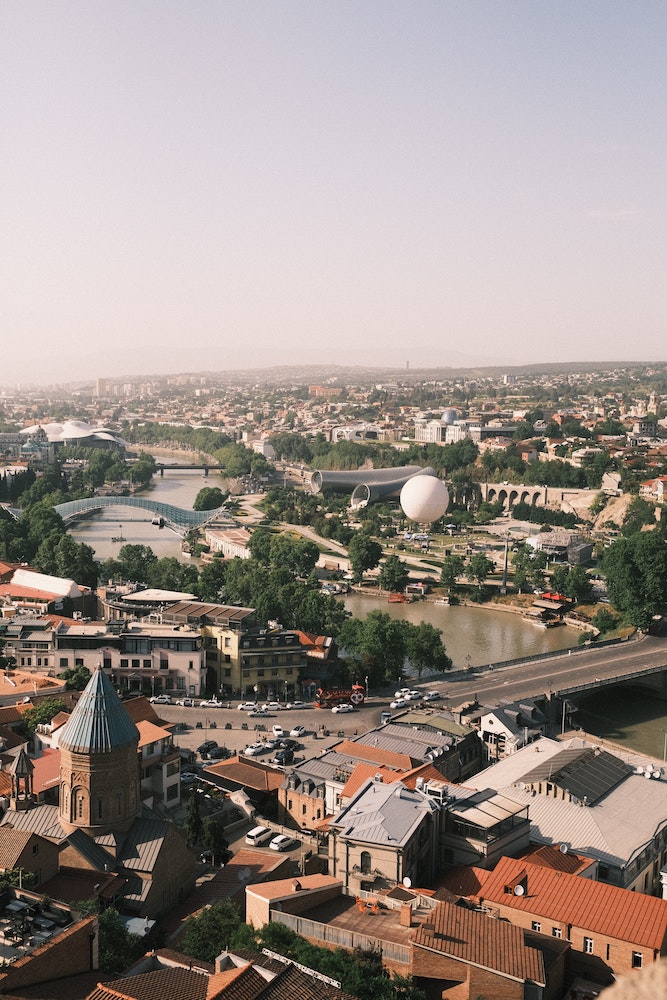 An aerial view of Tbilisi, bisected by the Kuma River. Photo by Daniel Newman.

A Perfect Day in Old Tbilisi

All along Rustaveli Avenue and bordered by the Kura (sometimes called Mtkvari) River, there’s a museum for everyone. Many of them belong to the larger Georgian National Museum complex, comprising ten different museums in total. For starters, visit the National Gallery, showcasing 18th century to contemporary Georgian art. At the neighboring Museum of Fine Art, you’ll find older artifacts and ancient artworks demonstrating the sheer ethnographic diversity of Georgia throughout the centuries. If modern art is more your style, check out MOMA Tbilisi.

There are also plenty of eateries and shops in this historic district, so be sure to fuel up between museum hopping. I’ll be checking out Cafe Leila and Kiwi Vegan Cafe for delicious plant-based fare before heading out for some bargain-hunting at the Tbilisi Flea Market, opposite the Georgian National Museum main building across Rustaveli Avenue. 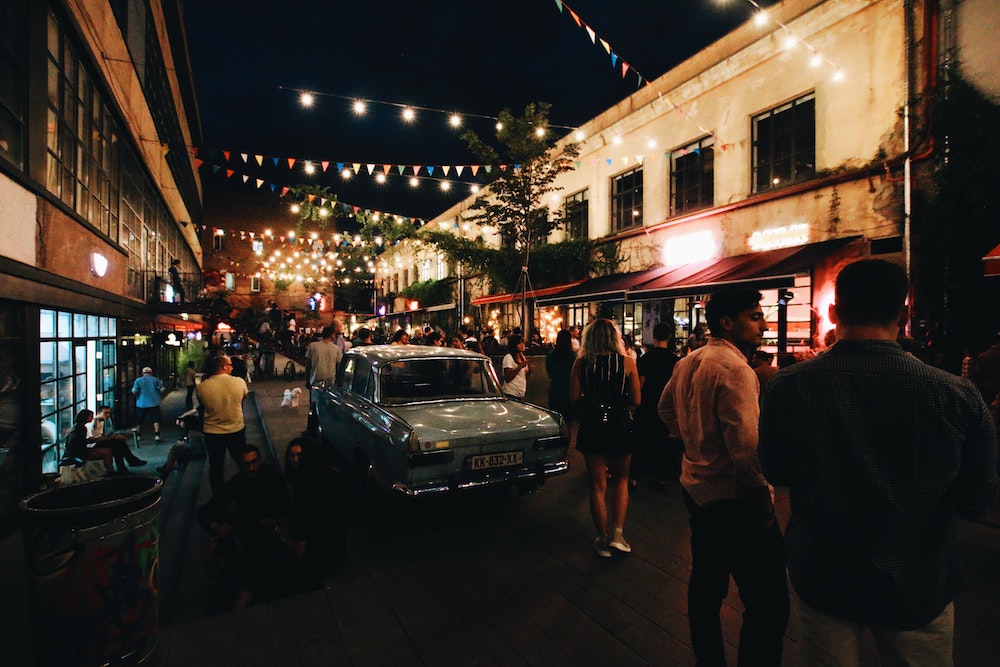 An energized Tbilisi at night as crowds gather around the city's bars. Photo by Artem Bryzgalov.

The majestic Metekhi Church and nearby equestrian statue of King Vakhtang Gorgasali. Photo by Mostafa Meraji.

LARP-ing, But Make it Georgian

Heading a bit north of the main drag, you’ll find the Open Air Museum of Ethnography. On this 52-hectare property you’ll find traditional Georgian homes and over 8,000 authentic artifacts (household items, textiles, ceramics, etc.) from different ethnographic groups who’ve lived in the region. There are actors demonstrating traditional Georgian lifestyle performances inside, transporting you to a different time. While you’re here, snap the perfect panoramic shot of Tbilisi and Turtle Lake from Svaneti Tower, a defensive structure dating back to medieval times.

Shop & Sip in the Vake District

Once you feel sufficiently immersed in Georgian history, it’s time to check out the Vake District, the youthful shopping sector buzzing with students from nearby Tbilisi State University. Enjoy a moment of quiet introspection in Vake Park, then head to the surrounding streets to check out any number of restaurants including Dinner in the Sky or Lama for gourmet street food. Don’t miss the Vake District branch of 8000 Vintages, a specialty wine shop boasting over 1,000 hand-selected Georgian wines.

On the other side of the Kura river in Tbilisi is the ancient Metekhi Church, built to resemble an extension of the cliff it is perched on. This motif, of architecture being in harmony with the natural landscape, is common in early Georgian architecture. The church has been destroyed and rebuilt over a dozen times, and the fragments of original interior murals and detailed façade carvings tell Tbilisi’s history, including its occupations, conquests, and royal dynasties. At one point, the church was even a Russian prison. 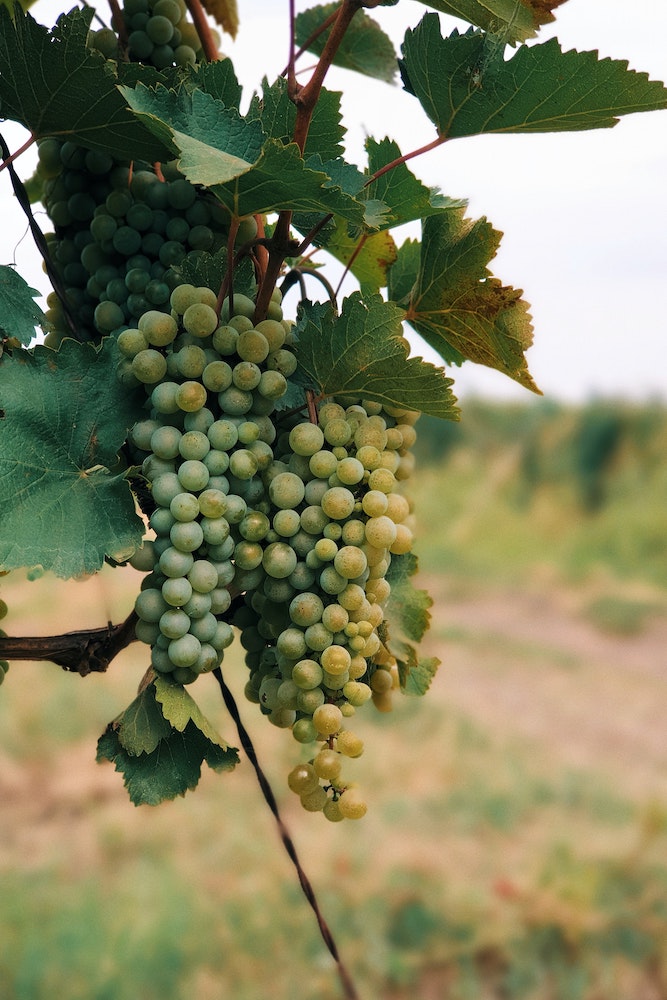 Captured in the Kakheti region, this is just one of hundreds of grape varieties used to make Georgian wine. Photo by Alex Shu. 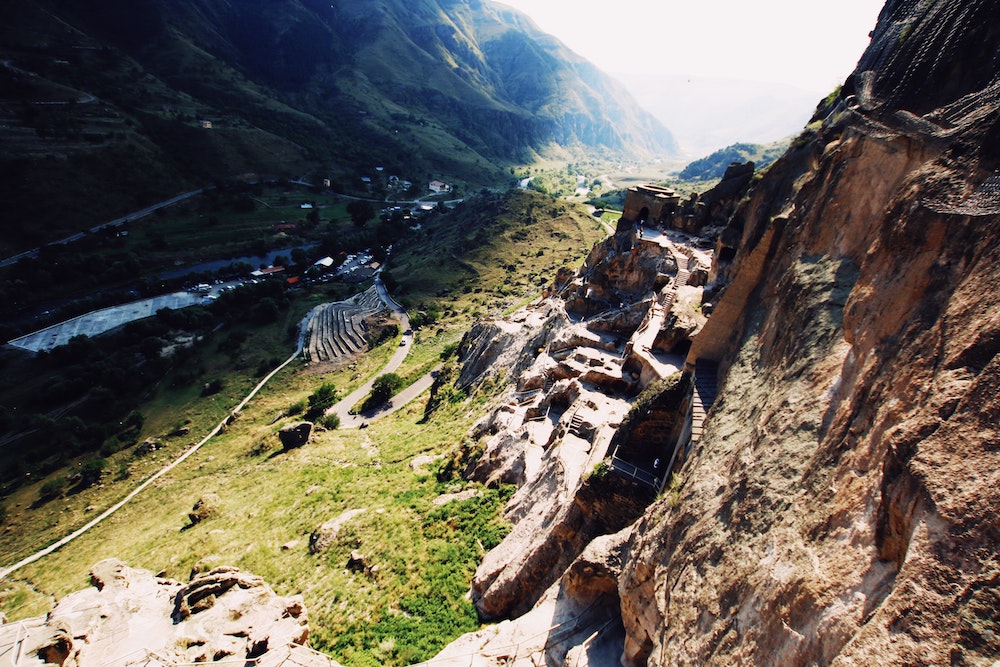 Vardzia is a 12th century monastery site built into the Erusheti Mountains. Photo by Artem Bryzgalov.

Georgia is considered the birthplace of wine, with evidence of winemaking dating back to 6,000 BC. Today, most Georgian wines are produced in the Kakheti region—accessible by bus from the capital for under $5. There are plenty of wineries open to tourists, the most famous being Winery Khareba, a winemaking complex carved into the side of the Caucasus Mountains, connected via tunnels. The tunnels’ temperature is perfect for the aging process, and you can also witness other traditional food and drink processes like Chacha (brandy) making, bread baking, Churchkhela (candy) making, and Georgian barbeque.

History buffs should consider a walking tour through Rustavi, an unique post-Soviet city with a population of 120,000 and growing. Just under a half hour’s drive from Tbilisi, Rustavi is an impressive relic from Georgia’s Russian-occupied era. While it’s not the most traditionally beautiful, the frozen-in-time Soviet aesthetic permeates Rustavi’s derelict factories, crumbling apartment buildings, and empty parks. (New Rustavi, as the name suggests, is the up-and-coming area of the city that Georgians are now flocking to.)

Or check out Vardzia, a 12th century cave monastery connected by a series of tunnels cutting through Erusheti Mountain. At one point in history, Vardzia contained over a dozen churches, 25 wine cellars, libraries, public baths, and other dwellings built into the mountain, all connected by tunnels and stairs, with enough space to house 20,000 people from an enemy attack. Unleash your inner archaeologist on a self-guided tour, or pick up an audio guide for 10 lari (~$3 USD) from the ticket office.