Your virtual guide to Tbilisi, the capital of Georgia, including experiences you can recreate at home, books to read and movies to watch about the historic city, Georgian wine and recipes to try, and who to follow for the complete Tbilisi experience.

The Tbilisi revival has been a long time coming. Once the home of a formidable Middle-Age Georgian Empire, the city has been ravaged by conquerors for centuries due to its advantageous location at the crossroads of Central Asia.

Since Georgia secured independence from Soviet Russia in 1991, the country’s unique identity has seen a renewed enthusiasm for its cultural contributions—they are the oldest known wine producers in the world, after all—and the artsy bohemian vibe of the capital, Tbilisi, has had trendsetters eye it as the next Berlin.

This is all to say that there’s much to explore in Georgia, and Tbilisi in particular. While we wait to book our next trips, now is the time to study up on the what is sure to be one of the hottest destinations once we’re on the other side of the COVID-19 crisis—there’s a reason we named Tbilisi one of our top travel destinations for 2020. 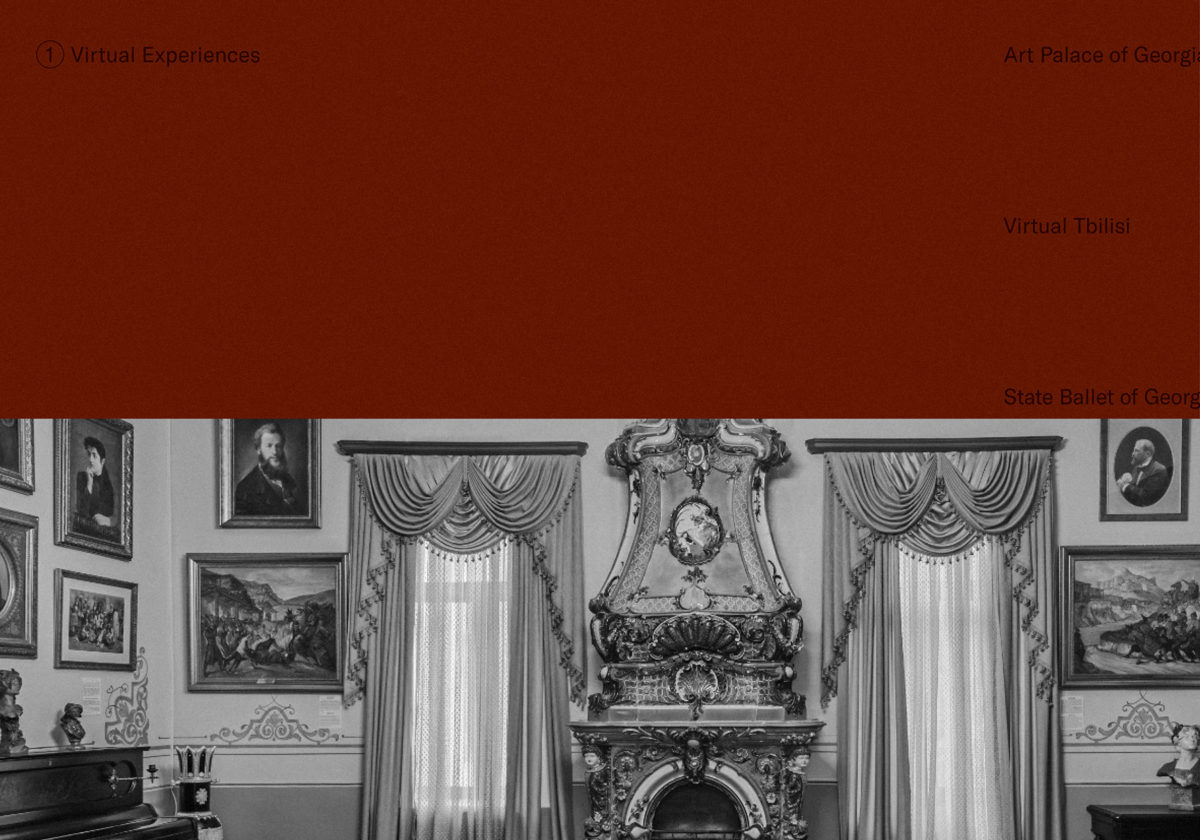 Just one of many museums housed under the Georgian National Museum umbrella, the Art Palace of Georgia collects a wide range of artifacts that document the cultural history of the country. From the artistic legacy of David Kakabadze, a multi-disciplinary artist and filmmaker born in 1889, to collections of traditional Georgian fashion and the beautifully graphic experimentation of Georgian fonts, the Art Palace of Georgia on the Google Arts and Culture Project is the place to get lost in the country’s rich cultural heritage.

One of the country’s great prides, the State Ballet of Georgia’s home base is at the 1847-built moorish revival opera house in Tbilisi, where the company performs both new and classical choreography. But in lieu of visiting the majestic theater, the State Ballet of Georgia’s YouTube channel has a number of their performances on view, from Don Quixote to previews of the annual Tbilisi Ballet Festival.

Owners of Oculus Go technology can get a primer tour of Tbilisi’s greatest hits, from the hills of the city’s ancient fortress overlooking the skyline to the bustling streets near popular hostel and event center Fabrika Tbilisi.

At first glance, the Georgian language might look intimidating, but the rules of speech are actually much more simple than English, as they follow very strict and simple phonetic rules. You’ll be able to pronounce just about any Georgian word you read after just one video. Speaking the Georgian language, of course, is a bit more complicated.

The ancient Abanotubani Bath Houses of Tbilisi are iconic, built on the famed sulfur-rich hot springs that give the Georgian capital its name. Much like the Dead Sea, the mineral qualities of the water are said to have healing properties that soften the skin and relax the muscles, and while it’s not quite like the original, you can take steps to recreate this experience at home by filling your tub with hot water and mixing it with some bath minerals. You can also grab a Tbilisi-scented candle with notes of pomegranate, tarragon, and walnut to evoke the old streets of the historic city. 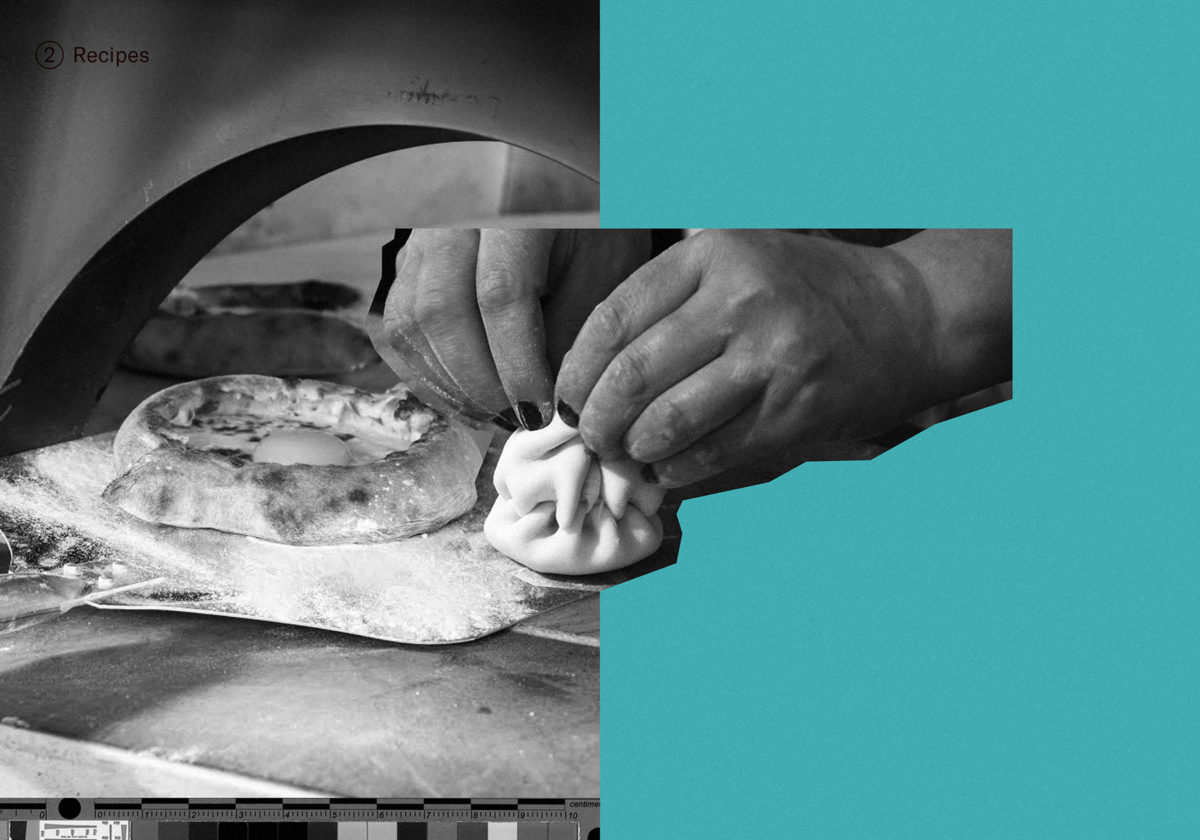 If one thing is certain about Georgian culture, it’s that the people of Georgia know how to throw a dinner party. Known as a “supra,” which kind of sounds like putting the super in supper, the famous Georgian feasts are lead by a toastmaster (known as a “tamada”) who speaks at length about whatever is being celebrated (or mourned, Georgian’s are known to host supras after burials as well) before everyone seated around the copious amounts of food give their own speeches.

It probably goes without saying that a lot of alcohol is consumed, and the affairs can be so overwhelming for first timers that the BBC published a guide to surviving a traditional Georgian supra.

Until we can all gather again, it’ll be best to make the below recipes for one or two portions. Hot tip: if there’s one specialty spice you should buy to make authentic Georgian food, it’s fenugreek. The slightly sweet and nutty flavor is used in sauces, curries, and on meat marinades.

One of the most iconic and delectable Georgian delicacies is Khachapuri, known affectionately around the world as the “Georgian cheese boat.” The thick and fluffy pastry stuffed with various cheeses, butter, and egg pairs perfectly with a tangy Georgian wine, and is relatively easy to make.

Another iconic feature at a Georgian supra is the steamed or boiled soup dumpling known as Khinkali. Designed to be eaten by hand, the brothy meat filling is spiced with cumin, coriander, thyme, and other savory Middle Eastern flavors.

All great cuisines of the world include a signature dip, and Georgian food is no different. Pkhali is a mix of puréed walnuts, greens, herbs, and spices sprinkled with a garnish of pomegranate seeds. Serve it with the dipping vessel of your choice.

Georgians love their walnuts, and this earthy walnut chicken stew known as Katmis Satsivi epitomizes that love. Pulverize some walnuts and let the chicken steep in it for one of the heartiest stews around. 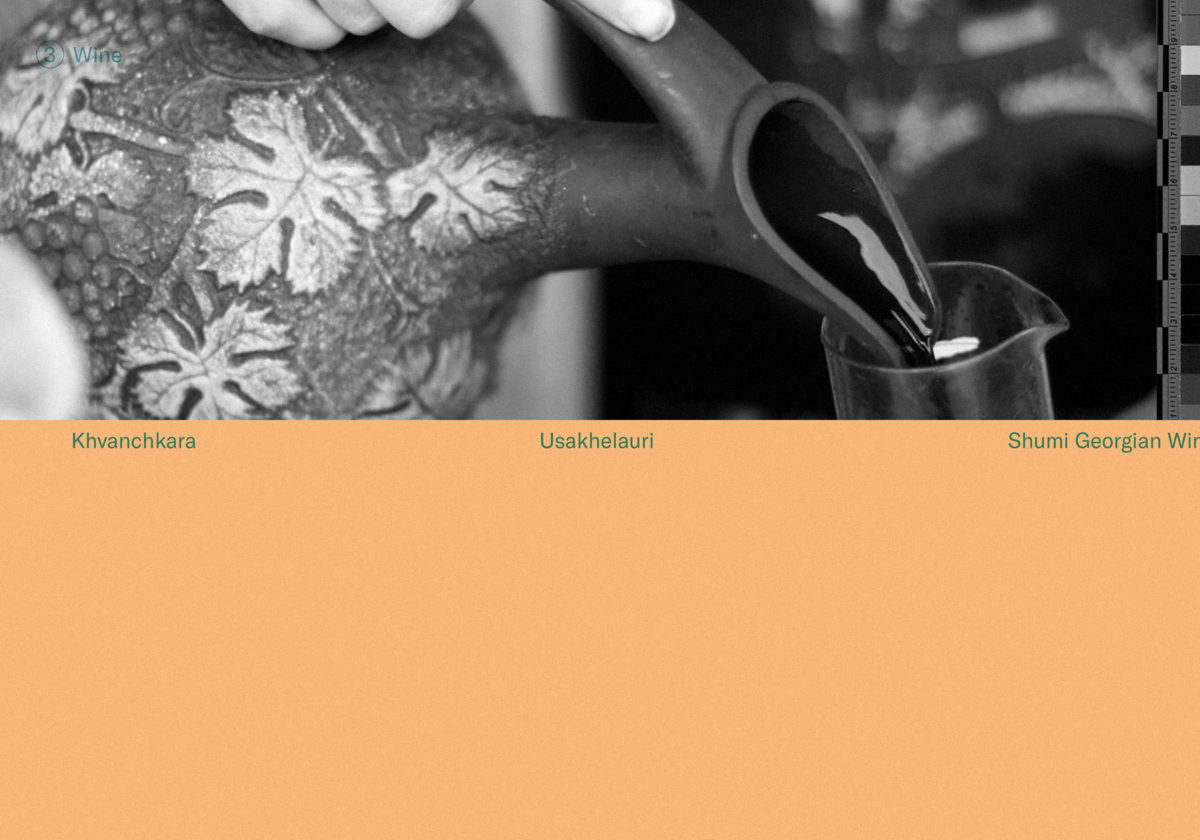 In 2017, the world’s oldest wine was discovered just south of Tbilisi in a pair of 8,000-year-old clay potsknown as Qvevri, which are used for traditional Georgian wine fermentation. Today, the Georgian wine industry is still thriving, with over 400 varieties found in the country, mostly cultivated by small producers using minimal-intervention processes. American journalist Alice Feiring was so enthralled with Georgian wine culture that she wrote an entire book about it.

Visitors looking to thoroughly understand Georgian wines should head to the Georgian Wine Museum, but in the meantime you can find Georgian varieties at your local wine store through Wine Searcher. We suggest starting with the two main varietials, the Saperavi red grape or the Rkatsiteli white grape—you could also go for a bottle of Khvanchkara, the semi-sweet red wine known for being Joseph Stalin’s favorite. 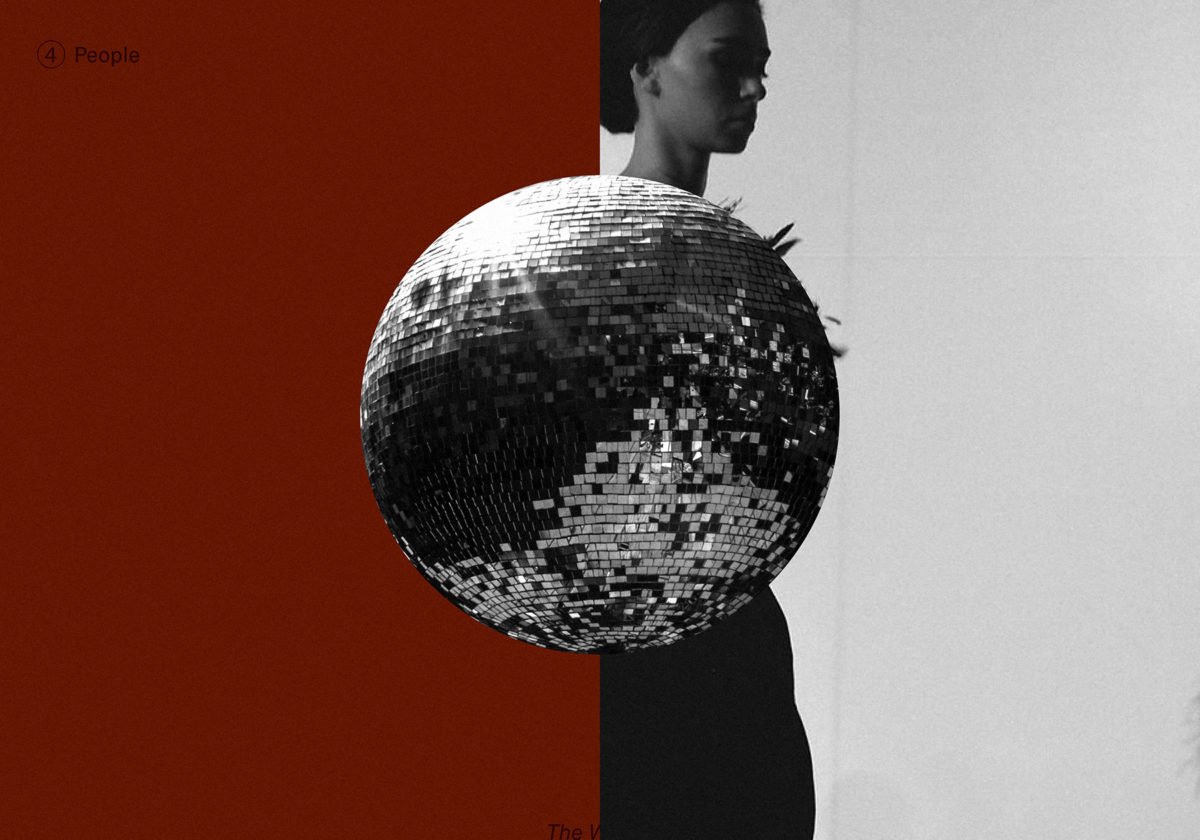 One of the cultural hearts of the city, Fabrika Tbilisi is a popular hostel, event and hangout space in the city center. Follow Fabrika Tbilisi for the latest in Georgian nightlife and arts scene.

Nina Gersami is a local photographer in Tbilisi who captures the gorgeous scenery and culture of her hometown with the expert eye of a National Geographic photog. Gersami’s photos will inspire your future Georgian itinerary in no time.

Established in 2009, Tbilisi Fashion Week has become a fixture on the alternative Fashion Week circuit, leveling up to prominent counterparts in Copenhagen and Berlin. Tbilisi fashion influencers can be found strutting their streetstyle year round, and local Georgian designers offer unique ready-to-wear and couture that is coveted all over the globe.

A prominent figure in the Tbilisi art scene is Natia Bukia, who founded Project Art Beat, a gallery that features contemporary Georgian artists both online and in their brick-and-mortar space in Tbilisi. Follow Project Art Beat’s Instagram for the latest shows and artists you need to know. 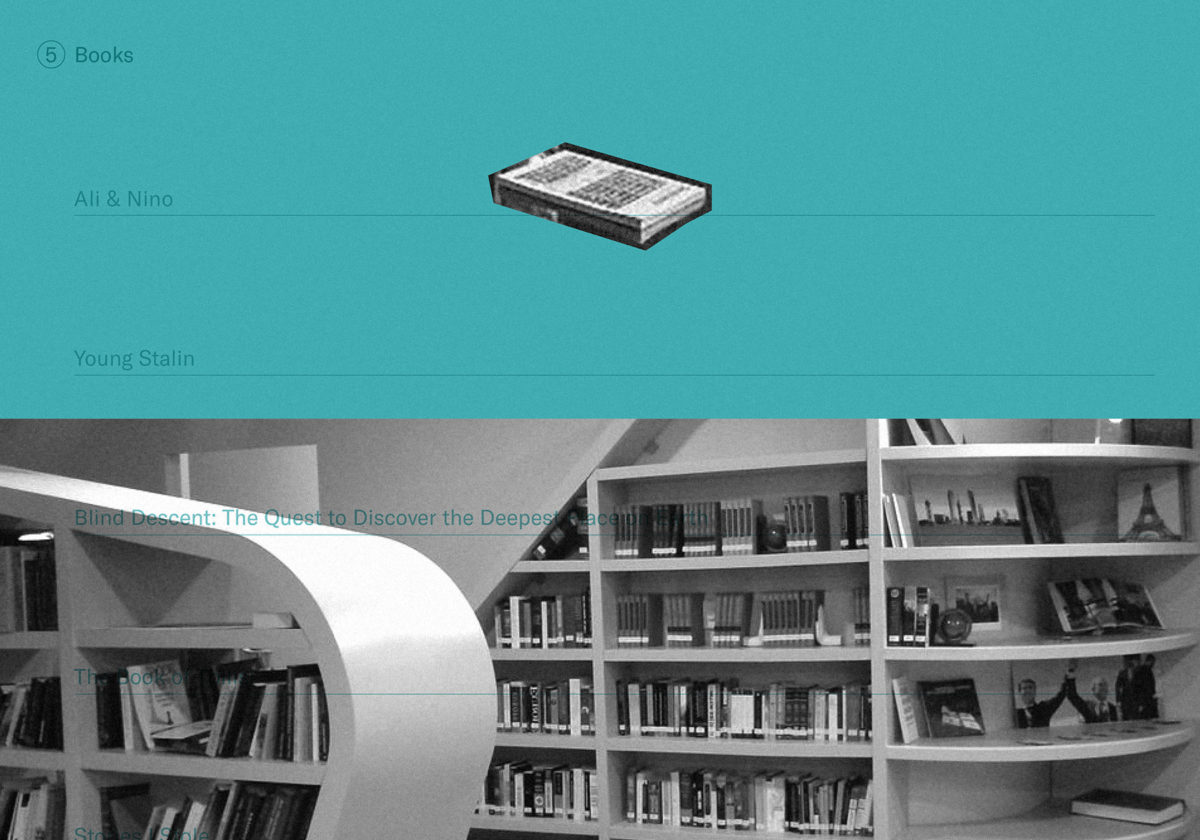 Books About Tbilisi and Georgia

Georgia is a highly literary country, the popularity of which dates back to 12th century poet Shota Rustaveli, whose epic poem The Knight in the Panther’s Skin is a thinly veiled allegory for the reign of Queen Tamar the Great, Georgia’s primary ruler during the country’s golden age around the same time. Since then, authors have captured the mystic magic of the country as well as its capital of Tbilisi through words, from Arab rule to the country’s role as a Soviet state, the latter of which is memorialized in today’s Stamba Hotel, housed in a former Soviet-era publishing house that is full of books in almost every room.

This gripping love story told with the backdrop of a war-torn country in 1918 has been translated into over 30 languages and made into a major motion picture with Oscar-nominated screenwriter Christopher Hampton at its helm. A forbidden love between Muslim royalty and a Georgian Orthodox princess, Ali & Nino details the tensions of the region with as much heart as it is full of history.

Before Joseph Stalin was, well, Stalin, he was a boy born to poverty-stricken and ethnically Georgian parents in a city called Gori, Georgia. This meticulously researched and beautifully rendered biography details the upbringing, relationships, and historic events that shaped the man who eventually became the formidable ruler of the USSR.

Blind Descent: The Quest to Discover the Deepest Place on Earth by James M. Tabor

As if Georgia weren’t already a magical and mystifying destination, the country is also home to the world’s deepest cave, often referred to as a “supercave.” Blind Descent tells the story of two scientists who, in 2004, were the first to finally explore the “bottom of the world,” contending with “thousand-foot drops, deadly flooded tunnels, raging whitewater rivers, monstrous waterfalls, mile-long belly crawls, and much more.”

The Book of Tbilisi edited by Becca Parkinson

A collection of short stories by contemporary Georgian writers based in Tbilisi, The Book of Tbilisi offers insight into an often overlooked literary city, with emotional and cultural context you can’t get from your average travel guide.

Stories I Stole by Wendell Stevenson

American Journalist Wendell Stevenson left her job at Time magazine in London to embark on a wild personal adventure in turn-of-the-millennium Georgia. The stories are described as “vodka-fuelled” and document a country still coming into its own after Soviet rule.

Otar Chiladze is the preeminent Georgian writer who is credited with reinvigorating Georgian prose in the post-Stalin era. His fifth book, Avelum, was his first novel written freely from the grips of Soviet rule, and tells the tragic love story of a western girl and a Soviet writer who must grapple with the unfortunate fate of the country they live in. 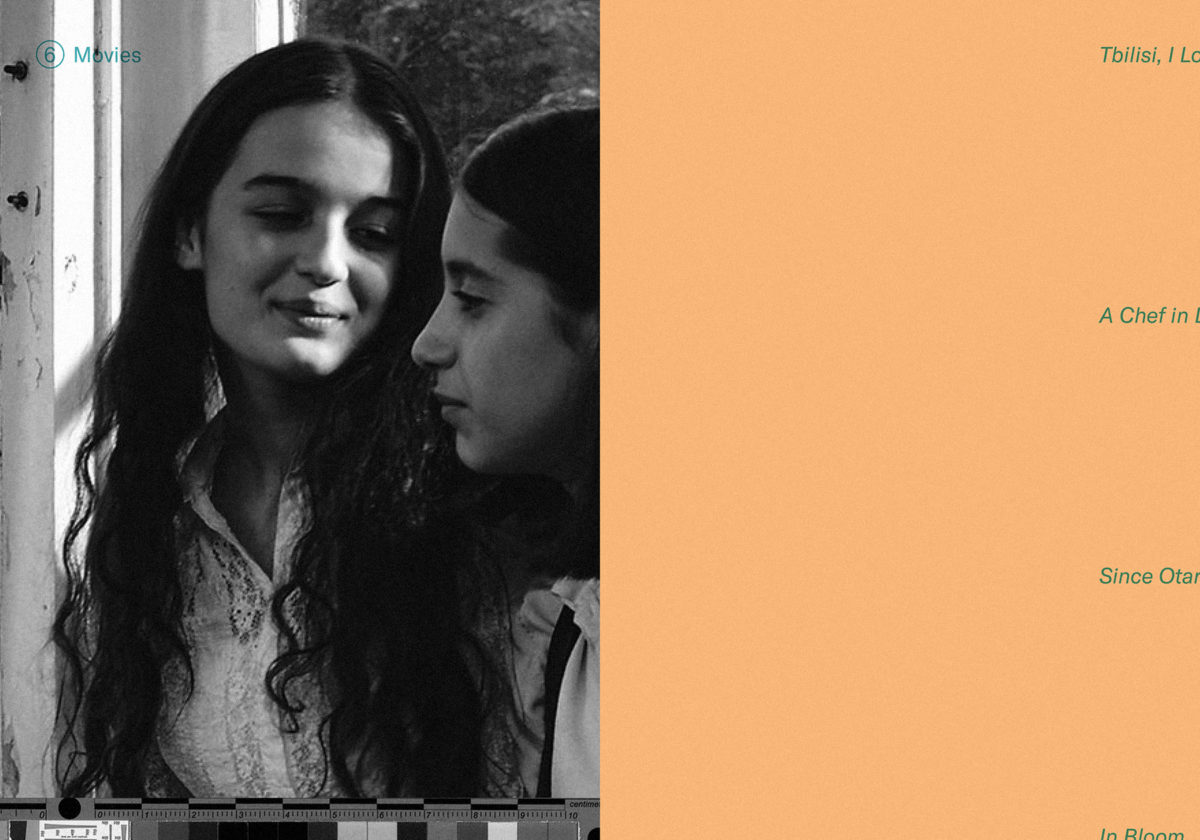 Two of the most important films to Georgian cinema aren’t available to stream online (that we know of!) but they are worth mentioning here: A Chef in Love is 1997 romantic comedy-drama that centers around a French chef who falls in love with a Georgian princess, only to have their affair interrupted by the Bolshevik coup of Georgia in 1920—it’s the only Georgian film to have broken the Academy Award nomination ceiling.

The other film is Since Otar Left, which won the prestigious Critics’ Week Grand Prize at the Cannes Film Festival, and follows a Tbilisian mother-daughter duo as they attempt to conceal the death of their brother/uncle from the family’s matriarch.

You can, however, get by with the below two options, which are more recently made and notable in their own right.

Directed by written and directed by Nana Ekvtimishvili in 2013, In Bloom tells the coming-of-age story between two teenage girls just after the fall of Soviet rule in Georgia as they struggle with their own class, societal, and family sagas. Watch In Bloom for free with an Amazon Prime subscription, or rent it on YouTube.

Tbilisi, I Love You

Part of the same franchise as Paris je t’aime and New York, I Love You, this 2014 anthology consists of ten vignettes filmed by Georgian native writers and directors and follows a widely diverse ensemble cast around the old cobblestone streets of Tbilisi. Rent Tbilisi, I Love You on YouTube.