How to Spend a Weekend in Taos, New Mexico

The Taos Pueblo is the only living Native American community designated both a World Heritage Site by UNESCO and a National Historic Landmark.
IndexAlly Betker

The best hotels, restaurants, bars, and things to do in Taos, New Mexico.

It’s hard to fathom how Taos became a destination. Tucked against the Sangre de Cristo Mountains in northern New Mexico’s high desert, its winters are brutal, terrain unforgiving, and—with a population of roughly 5000 at last count—the community is small. As Bob Fies, a docent at the Harwood Museum of Art, told me during my visit: “Taos people have learned to stick it out, to respect one another, and to be independent. You have to learn to be autonomous and creative. It’s been the creativity that’s kept Taos going. It’s a cauldron of culture and creativity.”

Despite the inherent challenges of Taos, artists have been flocking here since the late 1800s and early 1900s when the Taos Society of Artists was formed. In many instances, artists arrived for a summer or to study and never left (see: Georgia O’Keefe, Agnes Martin). Today, Julia Roberts and Brittany Howard, former Alabama Shakes frontwoman, call Taos home, as well as countless artists, musicians, and innovators. Taos is still an amalgam of culture and creativity, and you can’t help but be inspired by the land and the people.

Many visitors come for the skiing, and stay in resorts just outside of town. But to skip Taos proper altogether would be a mistake—because it’s there that you can learn about the distinctly New Mexican way of life that might just convince you to stay, too. 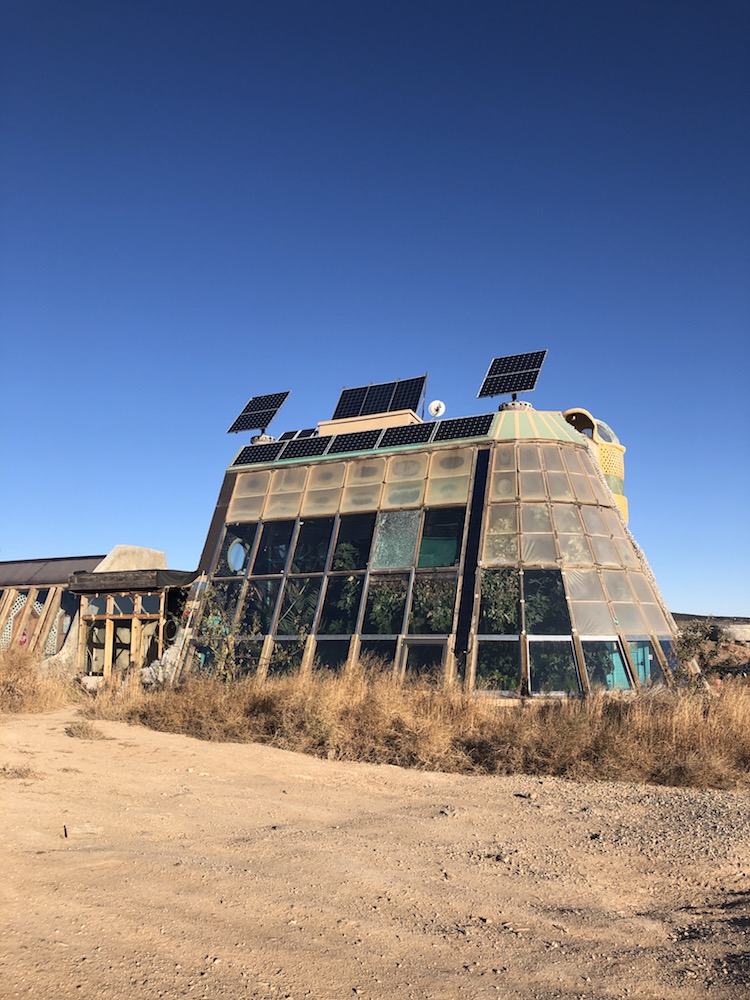 An earthship inside the Greater World Earthship Community, the world’s largest off-grid, legal subdivision, just outside of Taos. 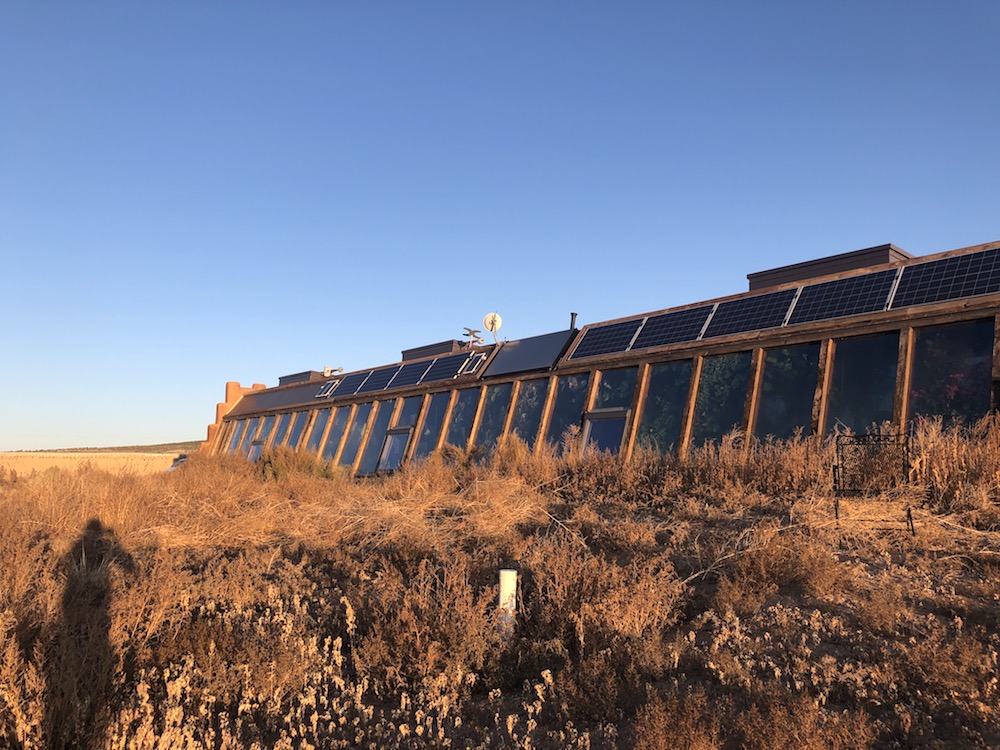 Watching the sun come up outside our earthship in Taos, New Mexico. 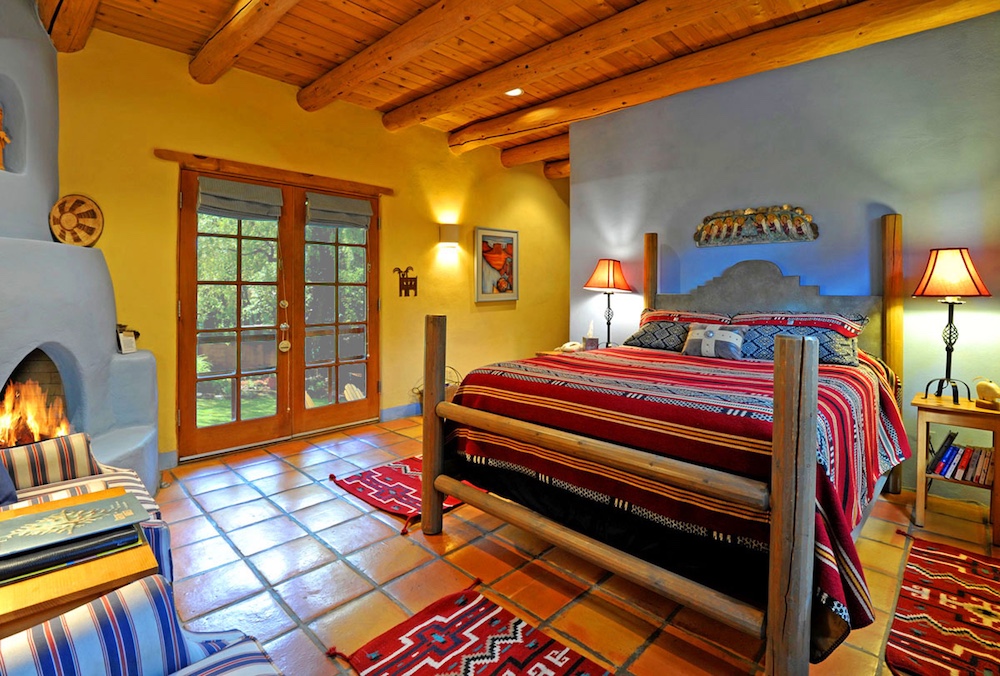 A room at the Hacienda Del Sol Hotel, a former artists studio that saw the likes of Georgia O’Keeffe, D.H. Lawrence, Willa Cather, and Ansel Adams pass through.

Where to Stay in Taos

Here is the chance you didn’t know you were waiting for to stay inside an earthship, a passive solar shelter made of natural and upcycled materials. Just outside of Taos is the Greater World Earthship Community, the world’s largest off-grid, legal subdivision. Waking up in one of these structures, made of earth-packed tires, bottles, aluminum cans, or plastic bottles, feels like you’re on the set of Star Wars, or have landed on Mars—especially in the morning when the sun coming up over the mountains bathes everything in an orangey-red.

This hotel was the former residence of Mabel Dodge Luhan, a patron of the arts who convinced a cohort of artists from New York to come out west. After Mabel and her fourth husband, a Taos Puebla man named Antonio Luhan, moved across town, this adobe home was used as a guesthouse and artist studio—Georgia O’Keeffe stayed here, as did D.H. Lawrence, Willa Cather, and Ansel Adams. Renowned American novelist Frank Waters lived here in 1939, authoring People of the Valley and researching for The Man Who Killed the Deer, which he dedicated to the Luhans. Today, the Hacienda del Sol hotel still offers stunning views of the Taos Mountain, seriously delicious complimentary breakfast (the scrambles are off. the. hook.), and charming southwestern hospitality and decor. 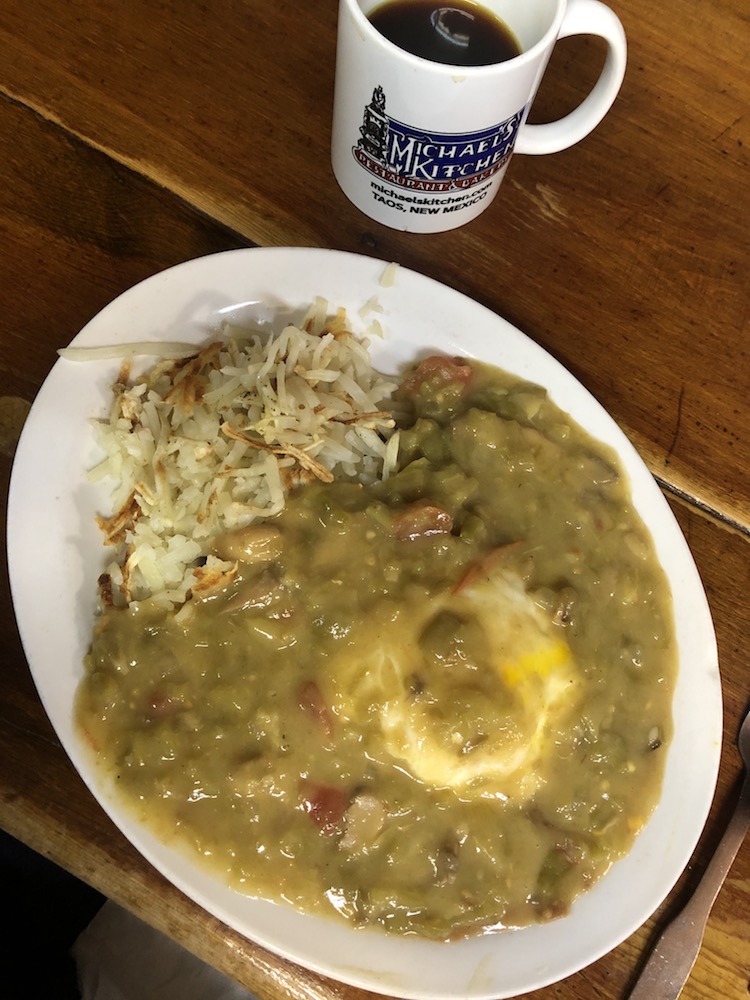 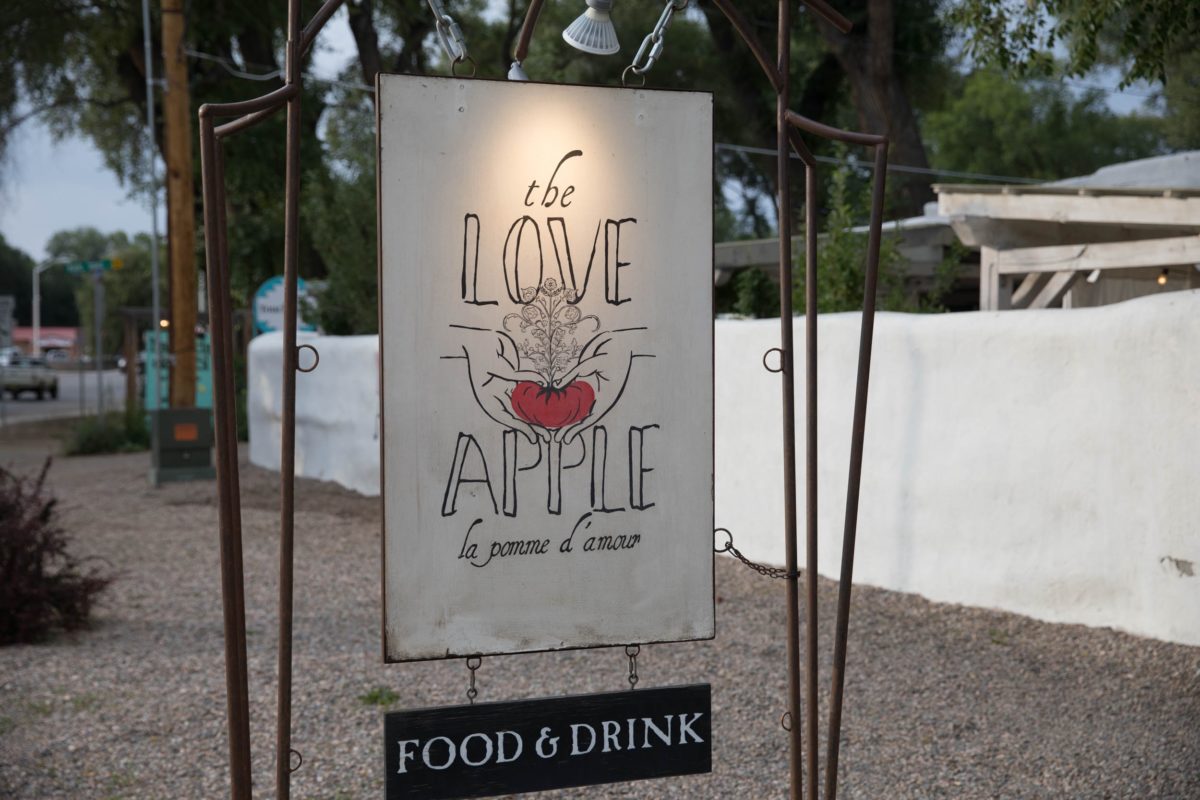 Reservations highly recommended at Love Apple, what we deem to be the best restaurant in Taos. 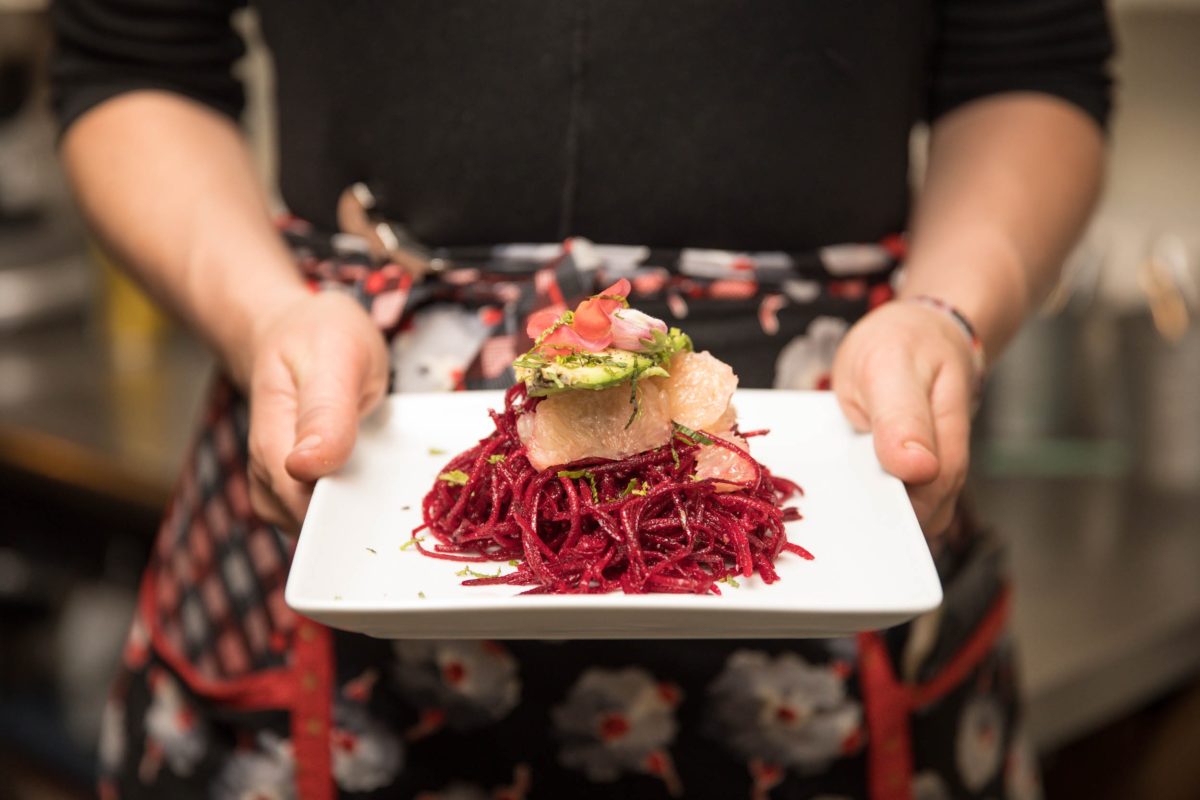 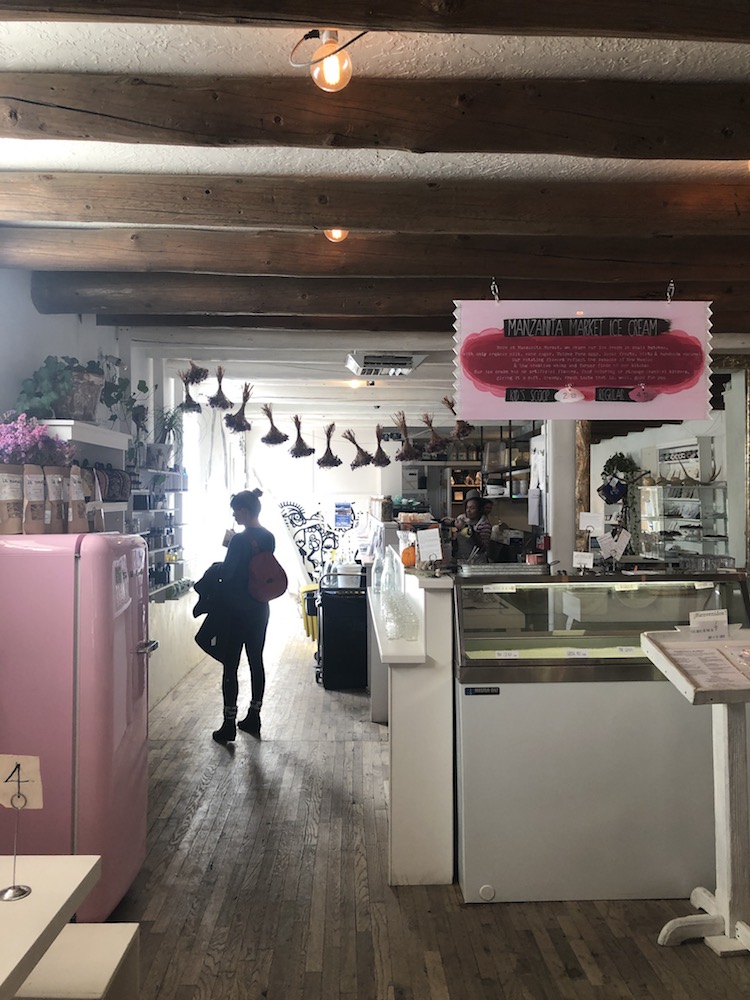 The Best Restaurants in Taos

Michael’s Kitchen and Bakery is your quintessential southwestern diner, with a massive menu featuring copious amounts of chili. Come hungry: My giant plate of huevos rancheros also came with two (!) choices of sides, including pancakes, toast, or hash browns, among other options. Come early: It’s first-come, first-served, and this spot is a favorite among locals. Bring cash, since they don’t take cards, and consider purchasing a birthday cake-sized cinnamon bun on your way out.

This all-organic community cafe uses regional ingredients to make breakfast items like blueberry blue corn pancakes, chorizo mingas, and smoothies, as well as a variety of sandwiches, salads, and soups, from chicken tinola and beef banh mi to hot ham and brie and bone broth. The white-washed, book-covered space also sells products from local makers, like oils, stationary, and spices.

Reservations highly recommended at Love Apple, where the menu changes nightly but always features organic local ingredients. Set inside a former chapel from the 1800s—stripped back to a now minimalist design—this beautiful space regularly fills up and will fill you up: with three mushroom walnut pate, caramelized onion and apple quesadilla, homemade gnocchi with peas, asparagus, and greens, and the Love Apple tacos. An absolute must visit. 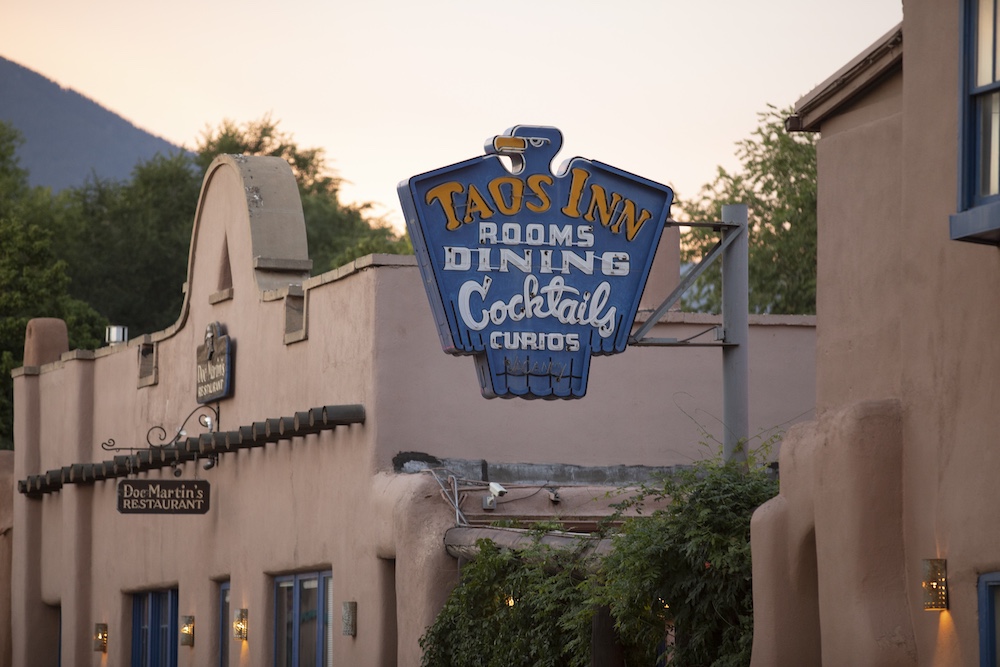 The Historic Taos Inn was built in 1936. 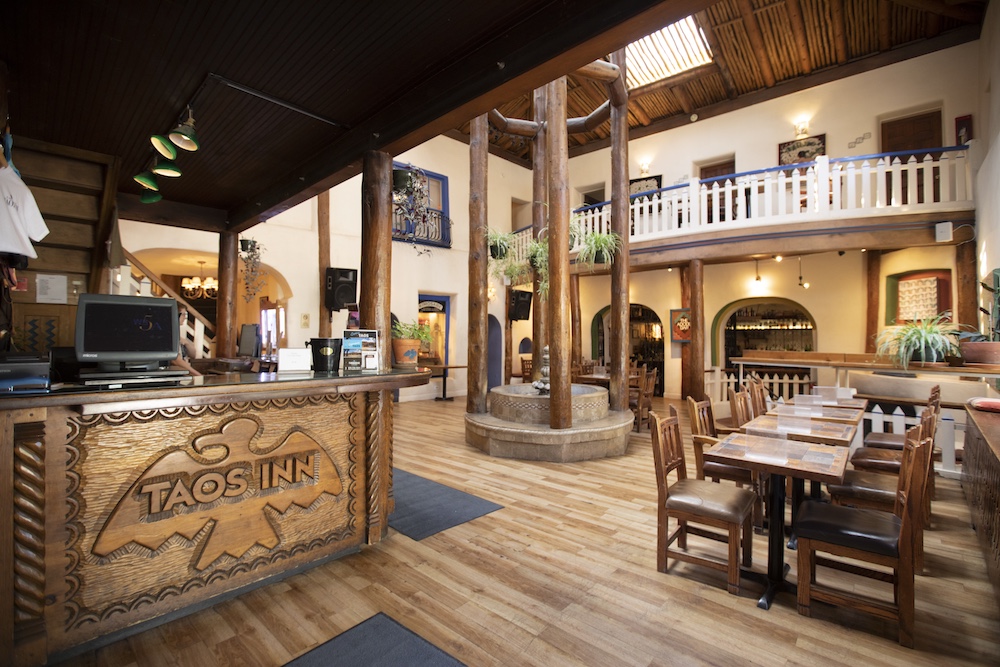 The Adobe Bar inside the Historic Taos Inn is called “the living room of Taos.”

The Best Bars in Taos

Called “the living room of Taos,” the Adobe Bar features a long tequila list and nightly entertainment from inside the Historic Taos Inn located in the center of town. Built in 1936, celebrities like D.H. Lawrence and Greta Garbo have spent time here, and Robert Redford has (more recently) been spotted at the bar. Stop in for a drink before getting dinner at Doc Martin’s, also at the Inn, which is named after Dr. Thomas Paul (Doc) Martin who was the county’s first physician, arriving here in the 1890s.

This brewery, founded in 2012, is known for its “Mothership,” a 6,000-square-foot facility near the Rio Grande Gorge Bridge with a 10-barrel brewing system, dining hall, music hall, and an amphitheater on five acres. You can also try 12 of their house beers on draught at the Taos Mesa Taproom in town, with a large selection of pizzas to accompany your brew of choice. 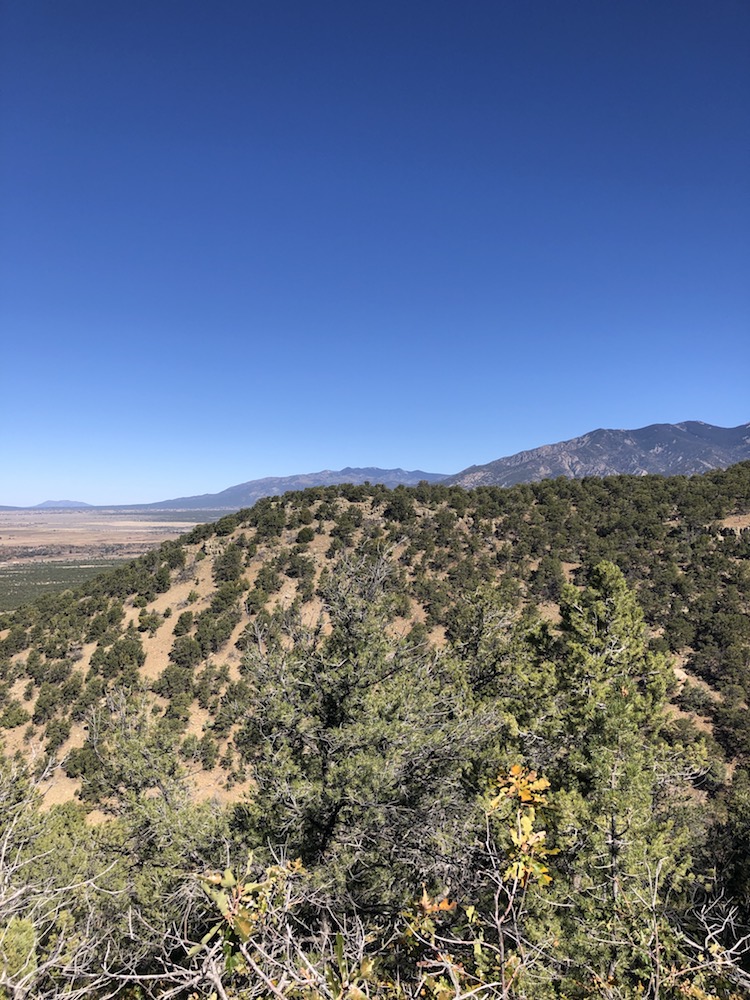 There are dozens of hiking trails to choose from inside the 1.5 million acre Carson National Forest. 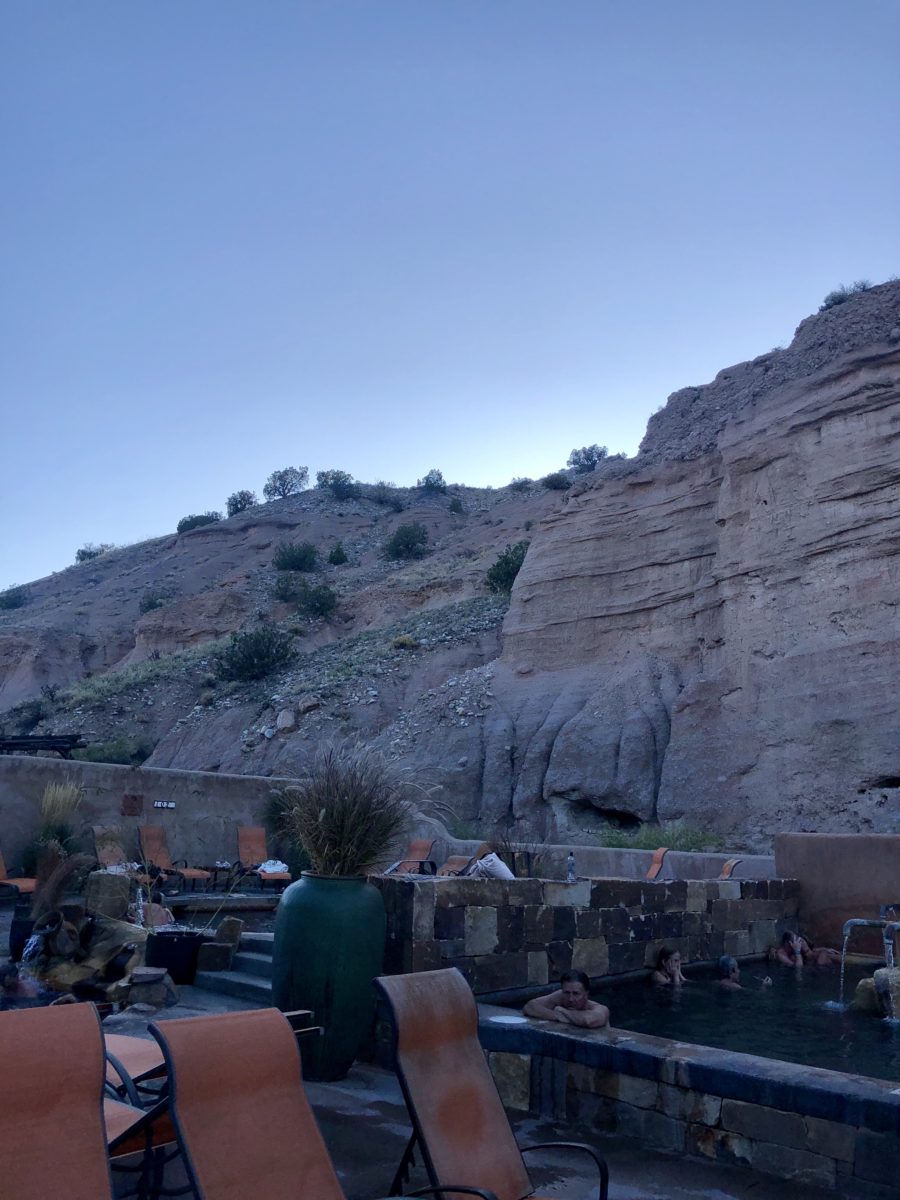 Ojo de Caliente is a thermal hot springs between Sante Fe and Taos with mineral pools, a mud pool, steam room, and sauna.

Things to Do in Taos

The Taos Pueblo people have been integral to the community for centuries and remain a cornerstone of the town today. Continuously inhabited for over 1,000 years, the Taos Pueblo is the only living Native American community designated both a World Heritage Site by UNESCO and a National Historic Landmark. It’s also the only tribe to receive all its seized land back from the U.S. government, when 48,000 acres of mountain land including their sacred Blue Lake was returned in 1970. Approximately 150 Taos Indians live within the Pueblo fulltime, where there is an elementary school and tribal council governance. College students give donation-based tours roughly every hour.

There are dozens of day hikes to choose from in Carson National Forest, the 1.5 million acre mountainous park. For a decently challenging half-day hike, check out the Devisadero Loop Trail, which is marked at 5.1 miles but take note: that doesn’t account for the one mile straight away to get to the trail head. There are some steep hills and switchbacks through the juniper trees and Douglas firs, as you make your way up to the devisadero which means “lookout.”  The peak was historically used by the Taos Pueblo Indians to stand guard against the Apaches who would come down Taos Canyon to raid the pueblo. Keep your eyes peeled for tarantulas—I saw two of the furry guys on the trail.

The 12 galleries that make up the Harwood Art Museum tell a comprehensive history of art in Taos, starting with work from the Taos Society of Artists and Native American artists. You’ll find pieces from TSA members Ernest L. Blumenschein and Joseph Henry Sharp, alongside works by R.C. Gorman, who the New York Times has called “the Picasso of American Indian artists.” You’ll also find drawings by Andrew Dasburg and Nicolai Fechin, sculptures from Ken Price, and, most famously, seven of Agnes Martin’s large grid paintings, set in a custom gallery with four yellow Donald Judd benches placed directly under the oculus.

Nicolai Fechin grew up in Russia and became a commissioned artist when he was just 13 years old. He studied at Kazan Art School, living in an abandoned house after his parents divorced. In 1923, he emigrated with his wife and daughter to New York City where he became an overnight success painting portraits. In 1927, at the invitation of one Mabel Dodge Luhan, he moved his family to Taos, where he purchased and spent five years remodeling a two-story, eight-room house, combining Russian, Southwest, and Native American styles.

In 1979, the Fechin House was placed on the National Registry of Historic American Homes and the State of New Mexico Registered Cultural Properties. Fechin’s daughter Eya returned to the studio after her parents passed away, creating the Fechin Institute and maintaining active exhibition and education programs until her death in November 2002. Today, you’ll find exhibits highlighting the Taos Society of Artists, Marjorie Eaton’s work, and of course Fechin’s own paintings.

In between Taos and Sante Fe you’ll find Ojo de Caliente, thermal hot springs with mineral pools, a mud pool, steam room, and sauna. Daily rates are only $30 Monday to Thursday, and $45 Friday to Sunday, and covers access to all amenities from 9:30 a.m. to 10 p.m. (Massages and other spa offerings cost more.) You can also stay on the property, and take advantage of the hiking and yoga offerings, or stop in for a drink or dinner at the Artesian Restaurant or Wine Bar Lounge, which source fruits and vegetables directly from the 2-acre farm on property. Consider making this your first stop on your drive from Santa Fe Airport to Taos.