A view of Taos Mountain from the courtyard of the Hacienda Del Sol Hotel.
DispatchAlly Betker

The Hacienda del Sol hotel in Taos, New Mexico, offers an immersive look into the town’s art historical past and present.

In a 1974 interview with The New Yorker about her time in New Mexico, Georgia O’Keeffe shared this tidbit about a woman named Mabel Dodge Luhan: “Mabel could be pretty mean, of course. She had the ability to paralyze a whole room. She would invite a lot of people to her big house and seat them around in a circle, and they would be so intimidated by her that nobody would say a word. And then the next day Mabel would go on about how everyone in Taos was so stupid.”

Luhan’s name may not be as prevalent as O’Keeffe’s, but she was a huge part of the artistic glitterati in her time. She hosted salons outside Florence, Italy, where she lived with her first husband, and then in her Greenwich Village apartment. She surrounded herself with artists and writers—Gertrude Stein, John Reed, and Isadora Duncan among them—and was neither afraid to speak her mind nor to follow her heart, as evidenced by her four marriages and numerous affairs with both men and women. (She may not have been a gracious host, but that apparently didn’t cause any problems in the romance department.)

In 1917, Luhan, who was then just Mabel Dodge, and her third husband moved to Taos, New Mexico, where a nascent art colony was already thriving, thanks to Joseph Henry Sharp and Ernest Blumenschein’s two-year-old Taos Society of Artists (TSA). Luhan is widely credited with attracting her contemporaries to the tiny New Mexican town, whose population was roughly 12,000 at the time, starting with Cubist artist Andrew Dasburg. (Shortly after arriving in Taos, she supposedly phoned an acquaintance in New York and said, “Send me a cook, and send me Dasburg!”)

Artists were drawn to the light and space in New Mexico—“Out here, half your work is done for you,” O’Keeffe told The New Yorker—as well as to the Native American community. In Taos, Mabel Dodge ditched Husband Number Three for a Taos Pueblo man named Antonio Luhan, with whom she’d spend the rest of her life (he supposedly set up a teepee on her front lawn and played the drums every night to win her over). The pair moved into an adobe house that sat on 1.2 acres backing onto Taos Pueblo land while they built a 20-room property on the other side of town. This property would come to be known as The Big House, now The Mabel Dodge Luhan House, a hotel and conference center. Their original adobe home was used as a guesthouse and artist studio—O’Keeffe stayed there, as did D.H. Lawrence, Willa Cather, and Ansel Adams. Renowned American novelist Frank Waters lived there in 1939, authoring People of the Valley and researching for The Man Who Killed the Deer, which he dedicated to the Luhans. Today it’s the Hacienda del Sol hotel.

Both the Luhan’s former residences are the ideal place to stay if you want to visit Taos and feel like one of the many artists and art patrons that spent time there—particularly the pioneering women, like O’Keeffe and Luhan, in addition to artist Agnes Martin and actress Marjorie Eaton. Martin spent the last 35 years of her life in Taos following a schizophrenic break in New York—she found solace in meditation, painting, and going out to the mountains. It was in Taos that she developed the grid, which she believed to be her greatest body of work; seven paintings from this practice are permanently on view at the Harwood Art Museum in Taos.

Eaton, meanwhile, traveled to Taos from Southern California almost on a whim. (When someone asked her where she was headed, she said, “I think it’s just south of Palm Springs,” not realizing there was an entire state in between where she was and New Mexico.) Shortly after she arrived, Eaton fell in love with Juan Mirabal, the son of the Taos Pueblo chief, and in the time they spent together each of them became inspired artists known for their Cubist depiction of Native American life. Ultimately, her father’s disapproval brought an end to their relationship, and Eaton moved back west to become a successful Hollywood actress, appearing in Bullitt, Star Wars, and Mary Poppins. 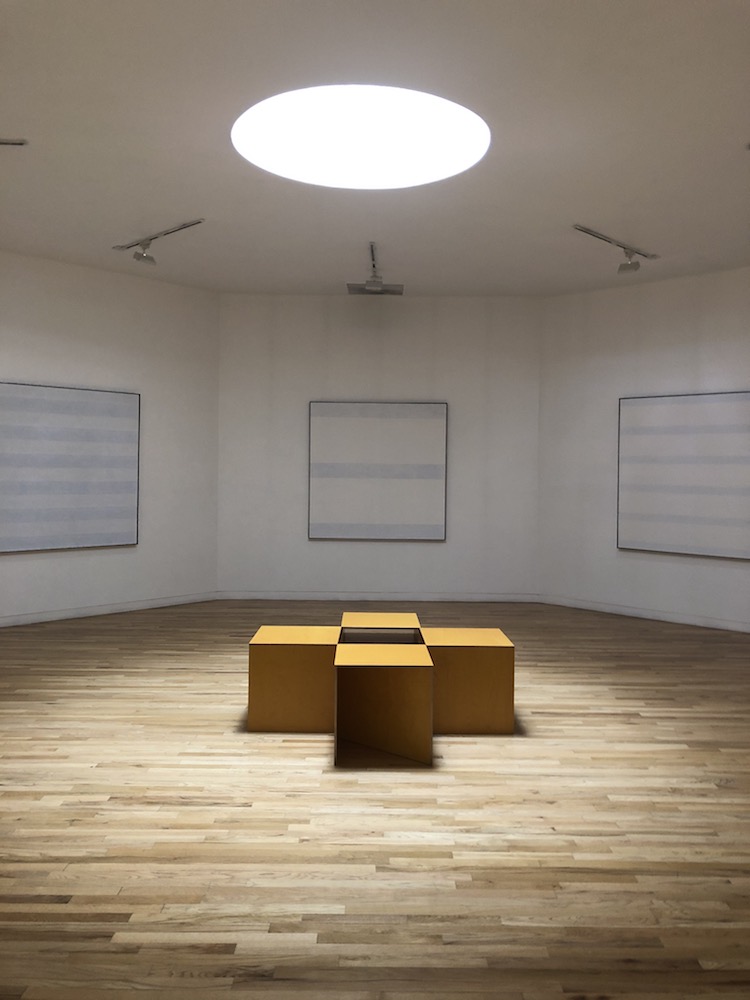 Pioneering female artists have called Taos home throughout history. Agnes Martin developed her famous grid paintings in Taos, and seven pieces from this practice are permanently on view at the Harwood Art Museum. 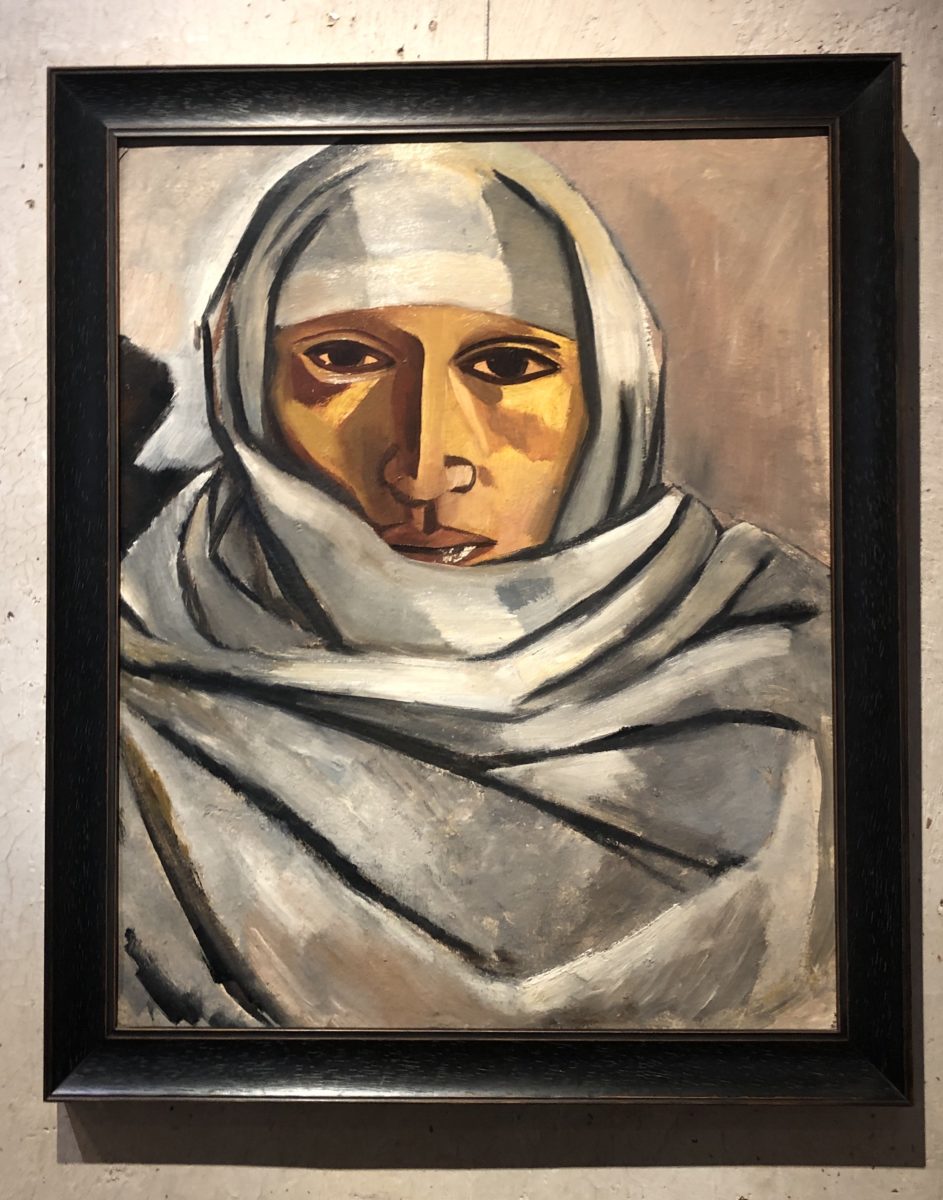 Juan II by Marjorie Eaton, from an exhibit on her work at the Fechin House in Taos. 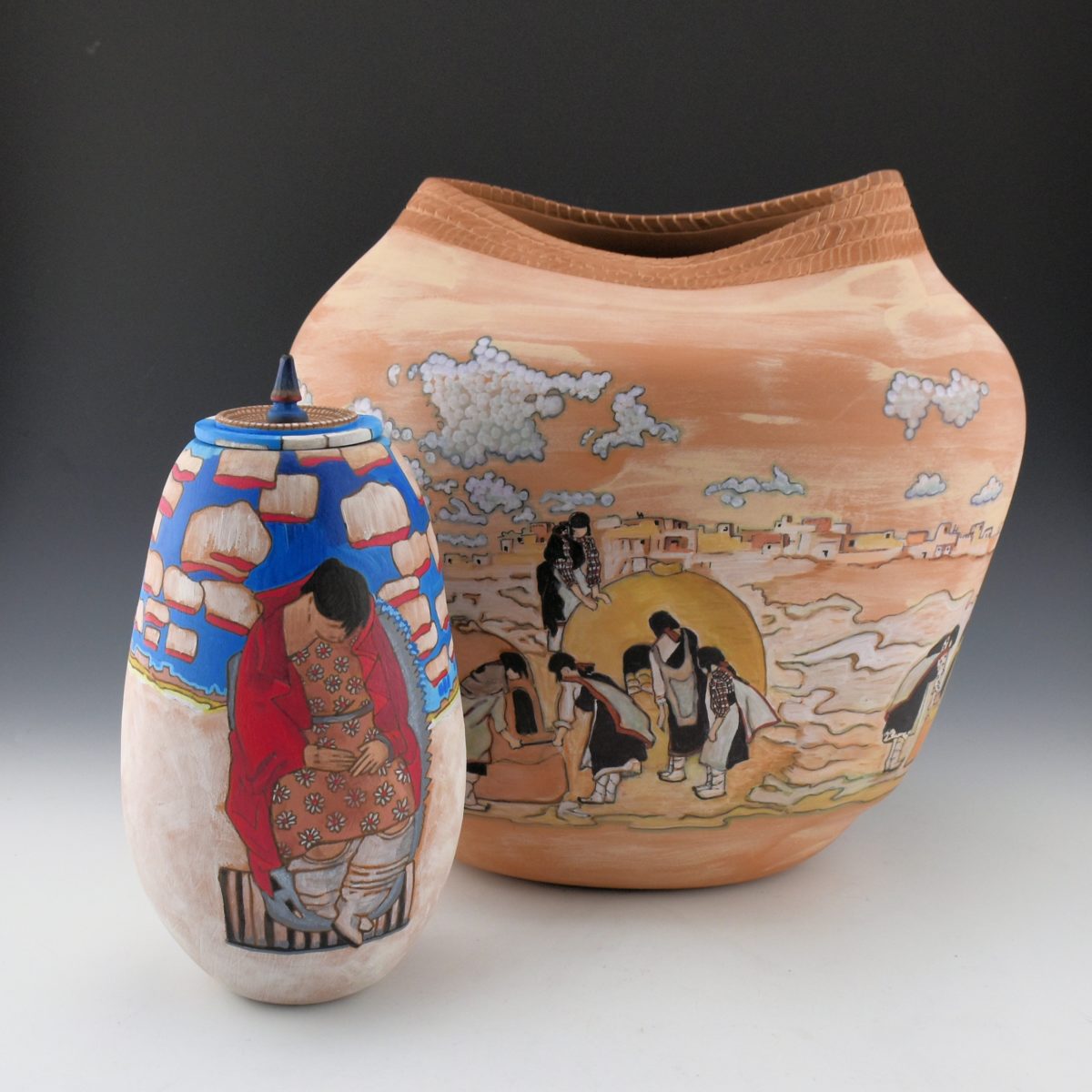 Potter Susan Folwell's most recent work portrays the influence of the TSA on representations of Native American life.

Today female artists such as potter Susan Folwell are still inspired by the New Mexican landscape and its history. “Taos is so beautiful—everything focuses around the mountain, and the light is phenomenal,” she says. “All of northern New Mexico is that way but there’s something that just feels definitively beautiful about Taos.”

Luhan may no longer hold court in Taos, but the community she helped to build is thriving. Art is almost everywhere you look, from the interior of restaurants like The Adobe Bar at the historic Taos Inn and The Love Apple, to the plethora of galleries lining the main drag. Historical-homes-turned-museums, like the Taos Art Museum at Fechin House and Blumenschein Home and Museum, host rotating exhibitions and give glimpses into life back in the early 1900s. These houses and others in the area are “so preserved you might think the artist has just gone out for coffee and will be back in a few minutes,” says Harwood Art Museum docent Bob Fies.

But the real way to feel like an artist is to visit the places that have inspired them for over a century. The Taos Pueblo hosts daily tours run by college students from the tribe, where you can learn about the history and meet some of the 150 people who live there full-time. “The painters of the TSA are inspirational to this day,” says Folwell, who’s part of the Santa Clara Pueblo and whose most recent work portrays the influence of the TSA on interpretations of Native American life. “At that time they could have turned [Native people] into anything, and they portrayed them as hardworking, beautiful people, and thoughtful people, and I appreciate that.” 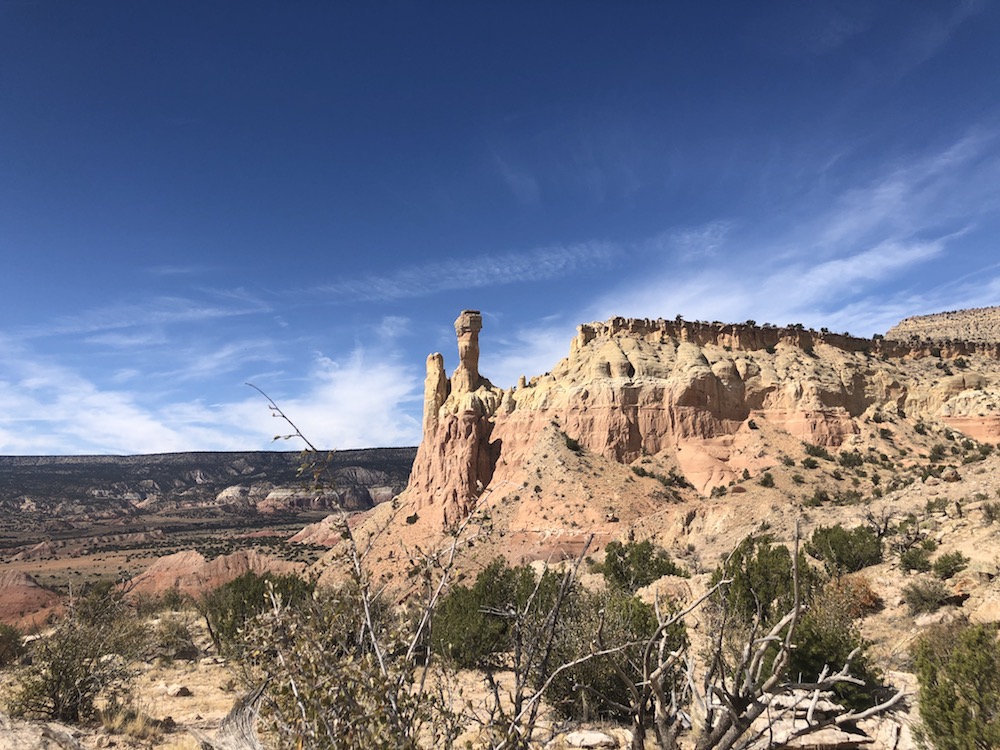 A view of Chimney Rock at Ghost Ranch, which Georgia O’Keeffe ascended regularly with her easel to paint the mesa. 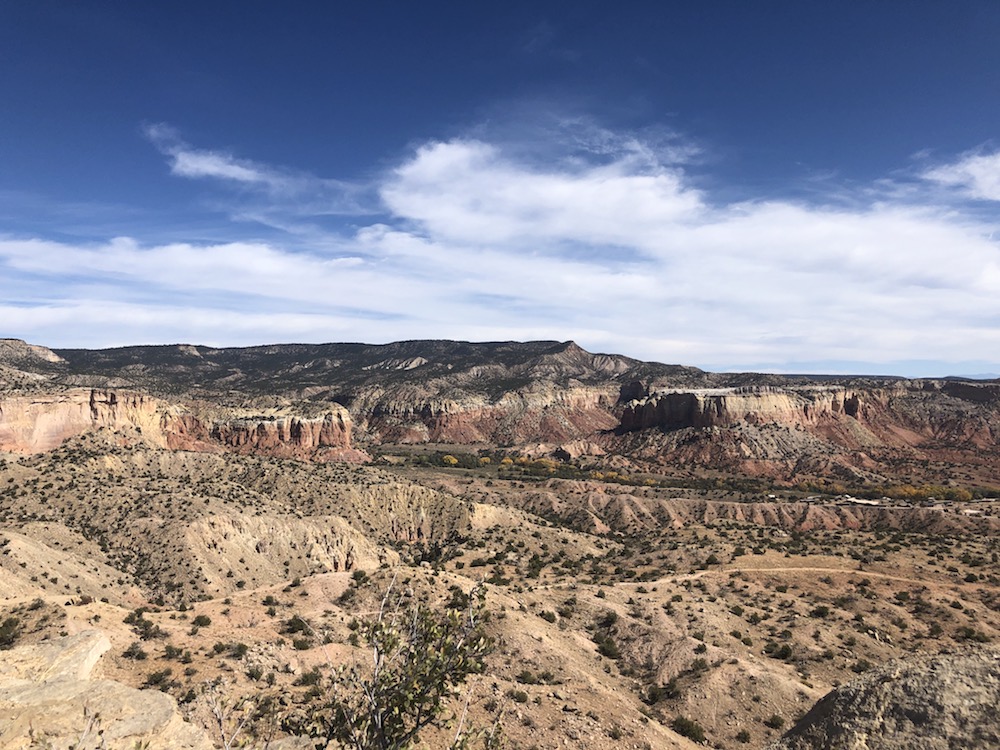 Views from the hike to Chimney Rock at Ghost Ranch. 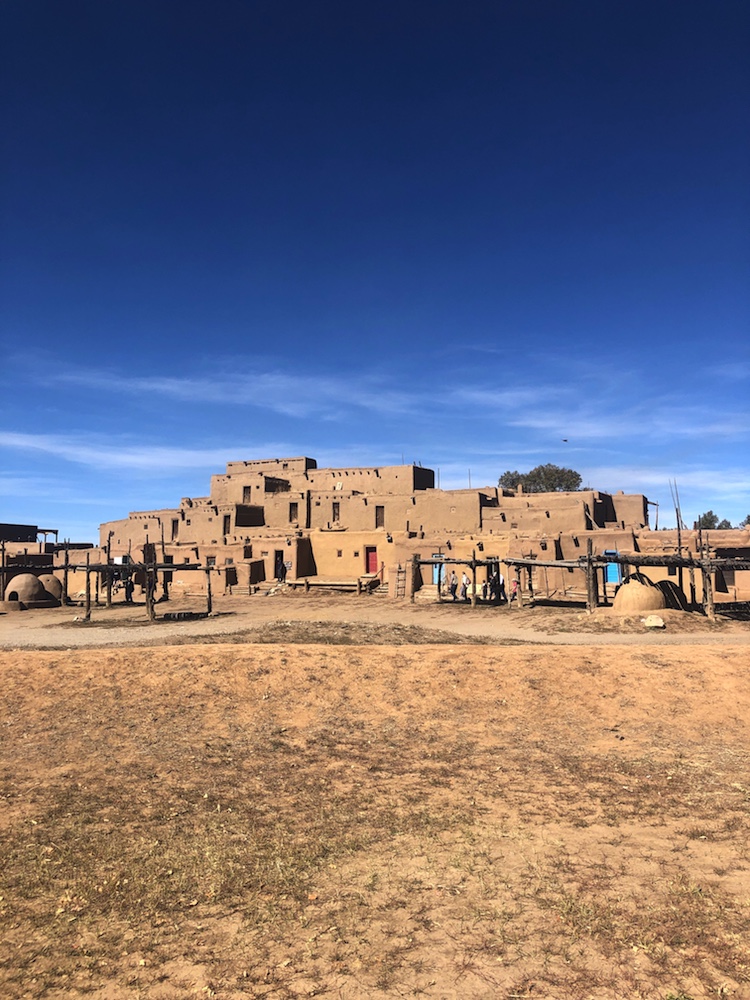 The Taos Pueblo is the only living Native American community designated both a World Heritage Site by UNESCO and a National Historic Landmark.

If you’re willing to drive about an hour-and-a-half-drive west, visit Ghost Ranch to see exactly why O’Keeffe fell in love with the landscapes here. Definitely make time for the three-mile hike up to Chimney Rock, with its sweeping vistas, and imagine O’Keeffe carrying her easel up the steep, rocky path to paint the same perspective. “I find people difficult,” O’Keeffe said. But New Mexico provided her with the isolation and solitude she required to do her work—and it’s provided the same to so many people since.

“Personally, I’m happy not to see people,” says Folwell. “Where my house is, I stare directly at Taos Mountain and I can do this for weeks on end. I think you have to have a certain amount of that mentality to survive here.”

Introverts may be attracted to Taos, but it turns out they certainly aren’t stupid.