The Best Food in Suzhou Comes From Freshwater Lake Tai

The dish in the center, a mushroom-based stir fry, was the star of this meal. Other courses included lake fish, lotus root, and a fried sesame ball.
IndexEmma Glassman-Hughes

It’s been said that water is life, and life in Suzhou is no exception.

Suzhou is wet. It’s got rivers, ponds, and elaborate water installations in manicured gardens and museums. It rains; an average of 43 inches fall per year, peaking in the plum rain season of early summer. Glassy-surfaced canals are the spine of the ancient city, the oldest section of town that was, according to my guide Sophia, built in 514 B.C. “like a chessboard.” “It’s one alley to one waterway,” she said. “You open the [side] window and you have alley; you open the [front] door and you have water.”

And where there is wet, there is also abundance. Located in southeast Jiangsu Province, Suzhou (soo-joe) has a population of 10 million, making it but a modest village in comparison to Shanghai’s 26.3 million, just 40 minutes away by train. (And by the same token, most westerners have never heard of it.) But within China, Suzhou is known and respected. It’s considered the home of all things elegant and refined and celebrated for products like double-sided silk embroidery, meticulously trained bonsai, and opera. Even the local dialect is said to be the most beautiful in all of China—so beautiful that schoolchildren in other provinces take field trips to the water city just to hear women speak. But even with all this, it is the city’s free-flowing H2O that has come to truly define it; Sophia also told me that the prefix “su-” actually shares the same Chinese character as flower, rice, and fish, all things that thrive in dewy conditions.

Which brings us, most importantly, to Suzhou’s diet. Nutrient-rich and sweet, Suzhou’s cuisine has been built around its crown jewel: Lake Tai. The lake has shaped life and culture in Suzhou perhaps more than anything else, providing the source of the city’s famous freshwater pearls and the reason for Suzhou’s status as one of China’s most picturesque destinations. “In heaven, there is paradise; on Earth, there is Suzhou.” Or so the colloquial saying goes. As for the culinary bounty it provides, lake food in Suzhou is varied and distinct, with the freshest ingredients and the most delicate of flavors. In Suzhou, you’ll be swimming in delicious offerings, but these are the four food items that you can’t miss.

Also to try in Suzhou: tai chi and moxibustion, staples of the city’s prevalent self-care culture. 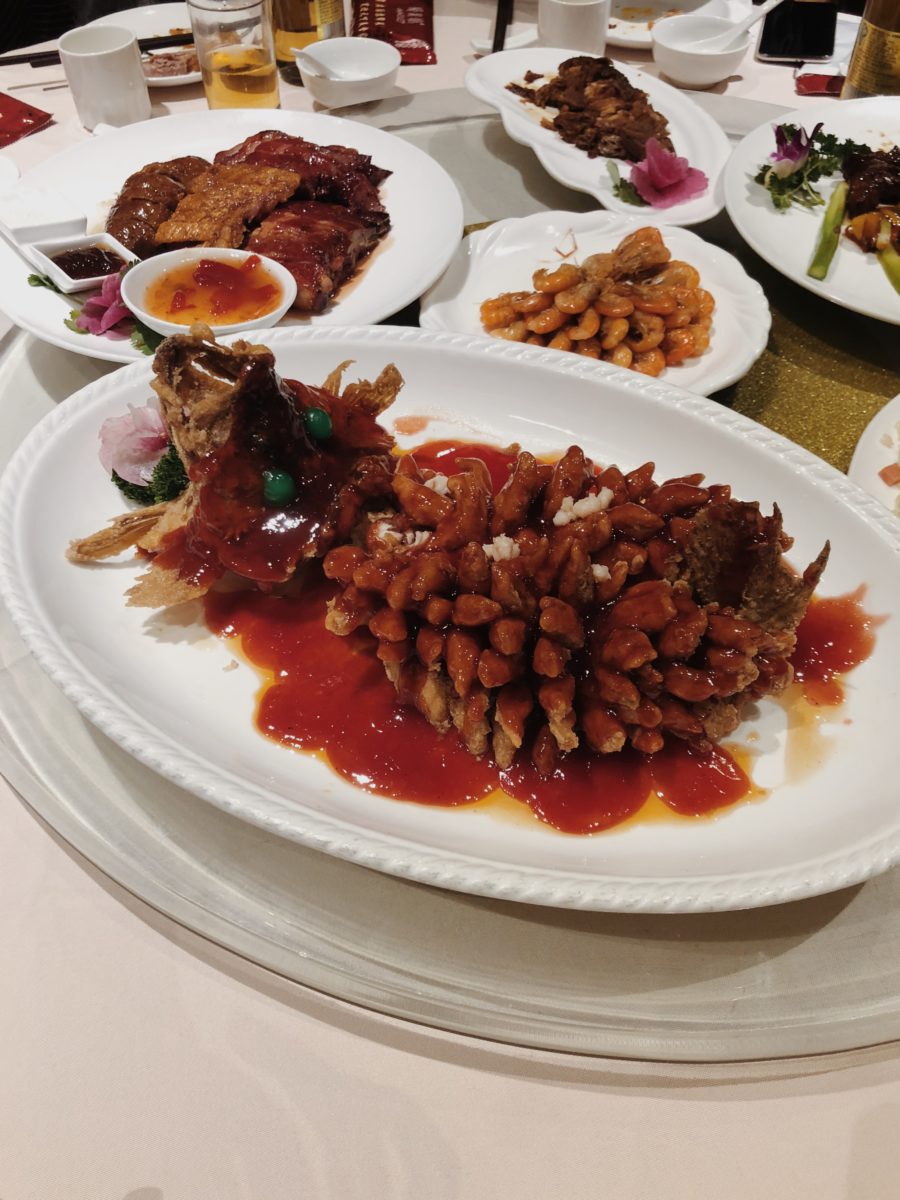 Nearly every restaurant in Suzhou has its own take on Mandarin fish, a staple in Suzhou. 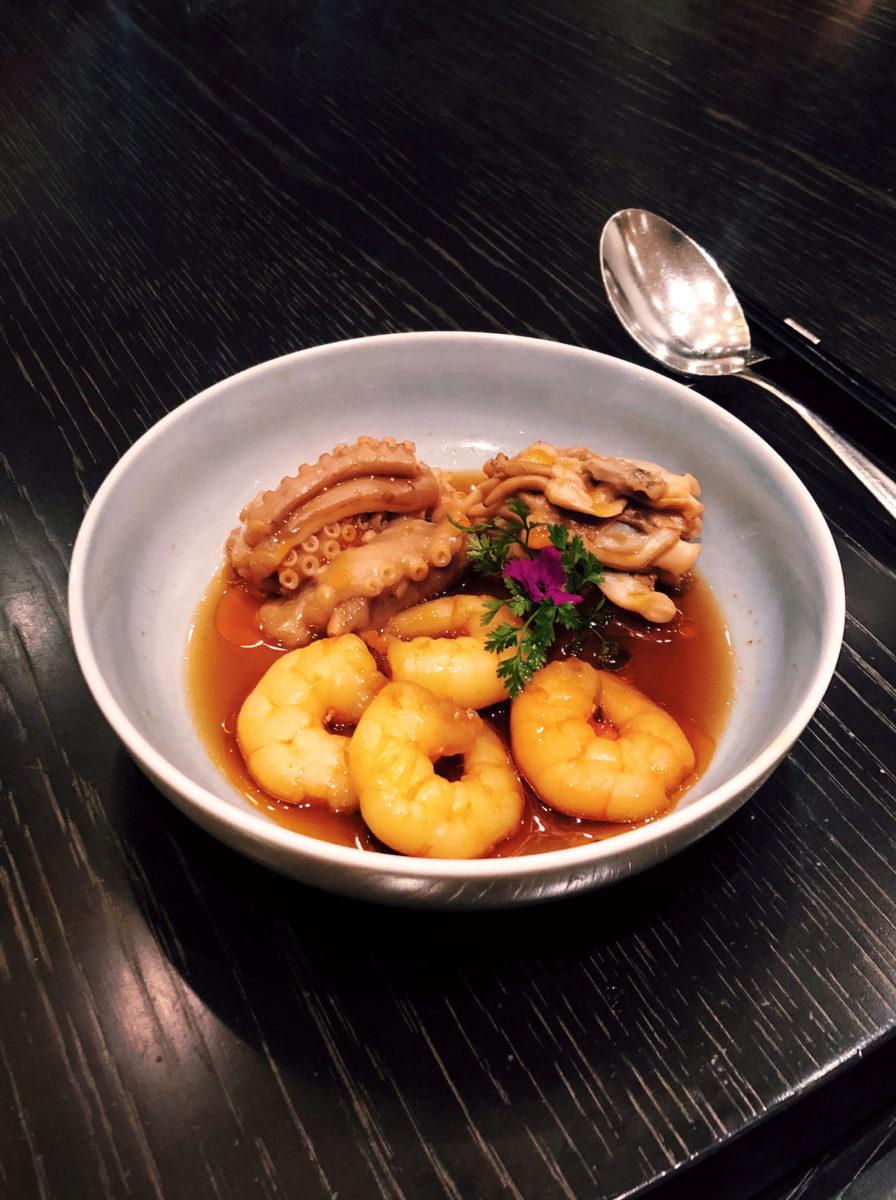 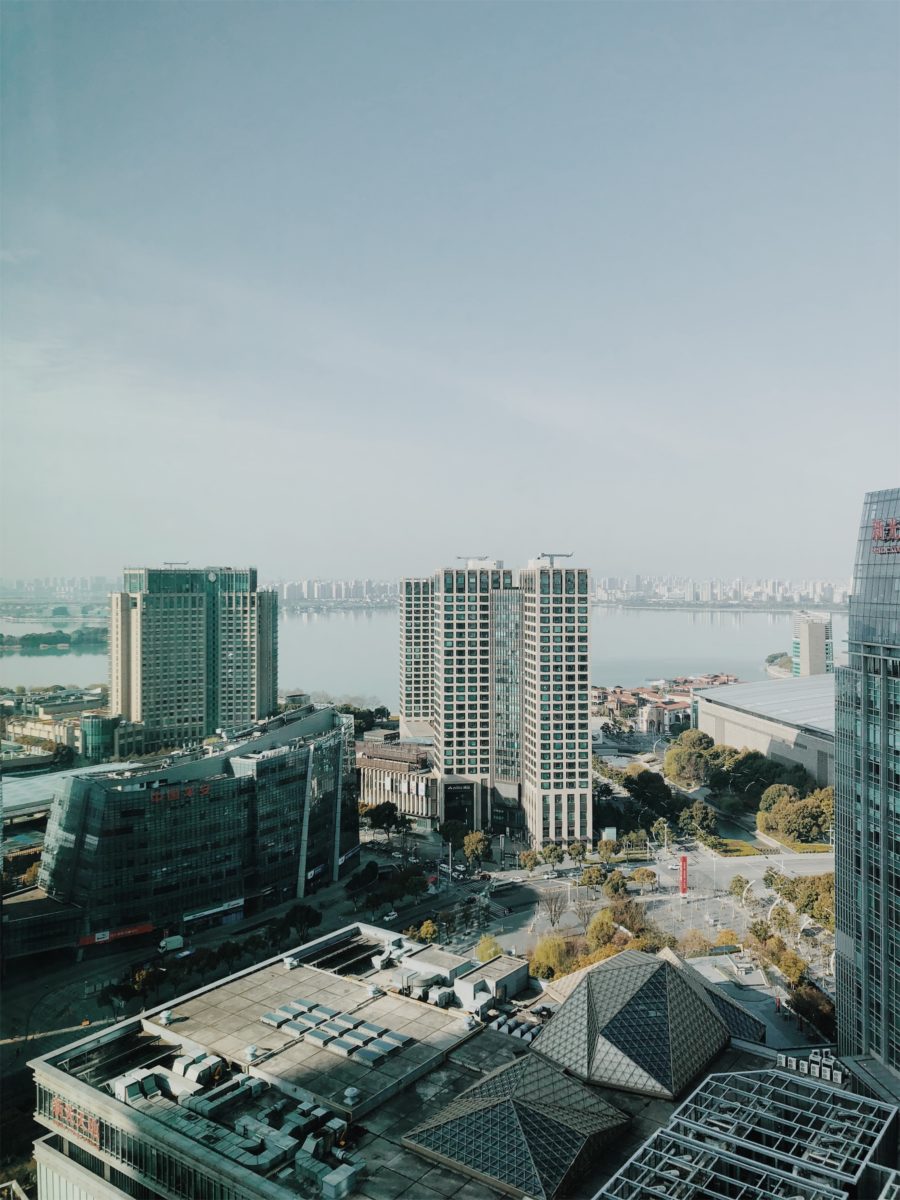 In the distance: Lake Tai, the heart of Suzhou's food culture.

The staple of Suzhou cuisine, this dish is hard to ignore and even harder to forget—especially if you’re at all squeamish about making sustained eye contact with your meal. Your locally caught fish comes to you whole, deep-fried and cross-hatched, and smothered in a sweet and tangy orange mandarin sauce. Nearly every restaurant in Suzhou will have their own variation, but dining at De Yue Lou or Song He Lou is fail-safe.

Lake shrimp are small, but they pack a lot of flavor, especially when marinated in local green tea, or Bi Luo Chun. I haven’t been able to verify it, but I was even told that in the Suzhou dialect, “shrimp” and “welcome” share the same characters. Welcome to your new favorite dish! Try Hui Chi 88 for a heaping plate of the good stuff. 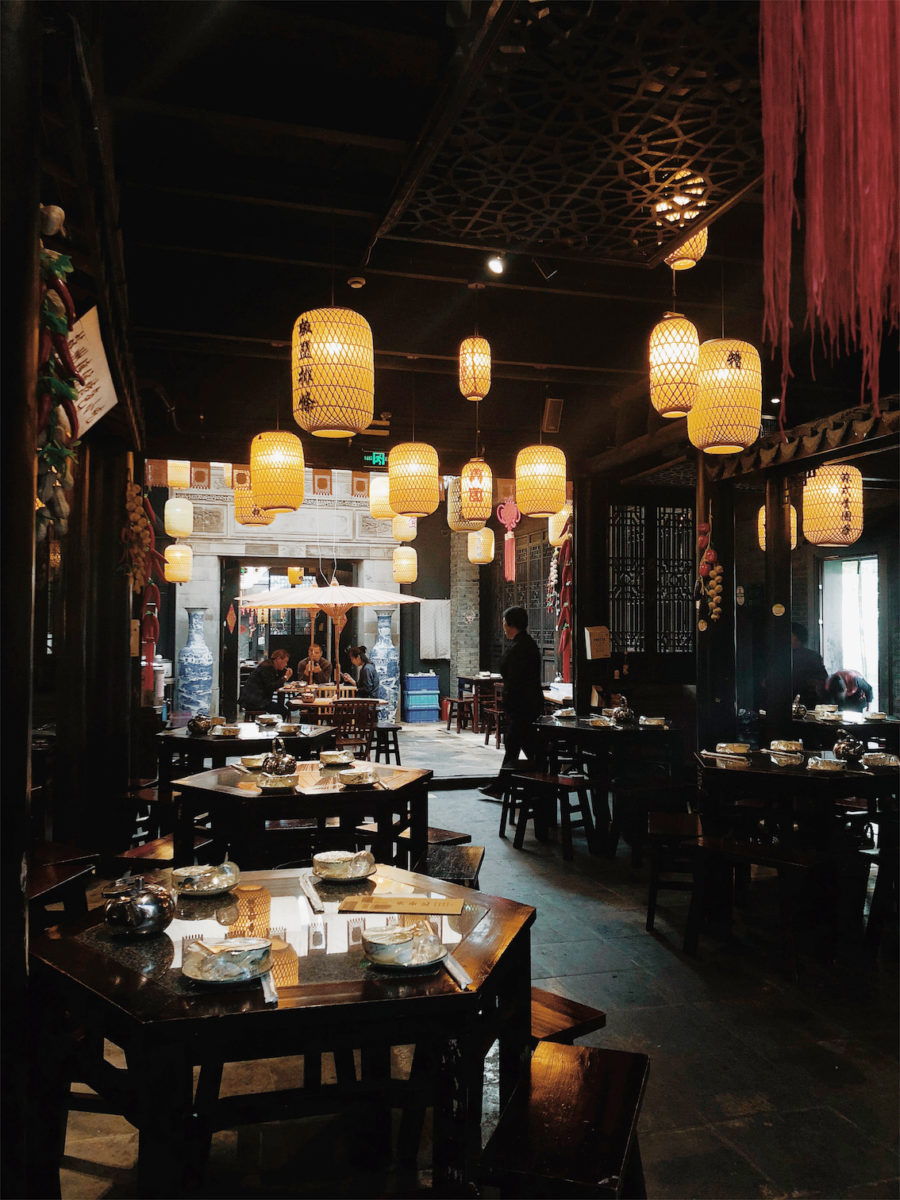 A popular spot near Pingjiang Road. 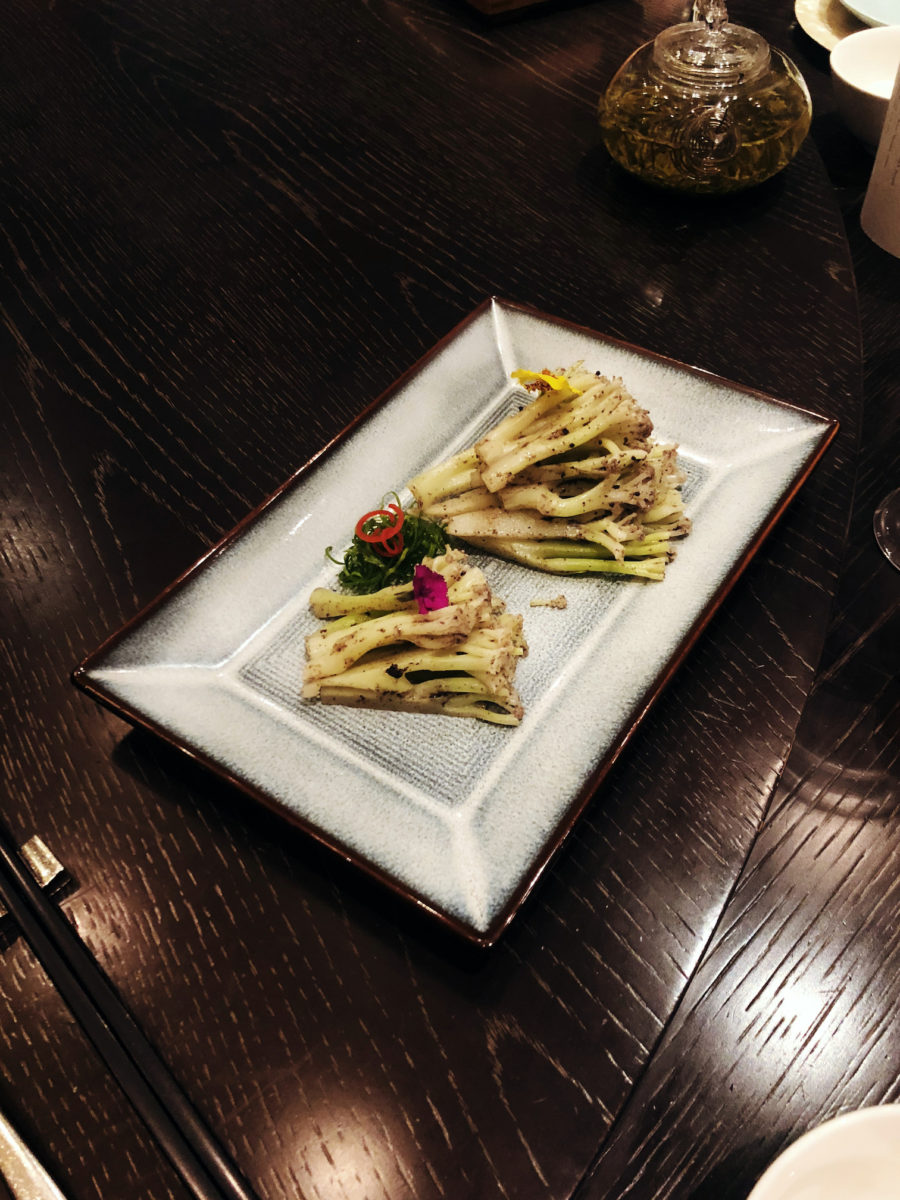 A vegetable dish at Su Yuan, the W Suzhou’s Chinese restaurant,
with a pot of Bi Luo Chun in the background. 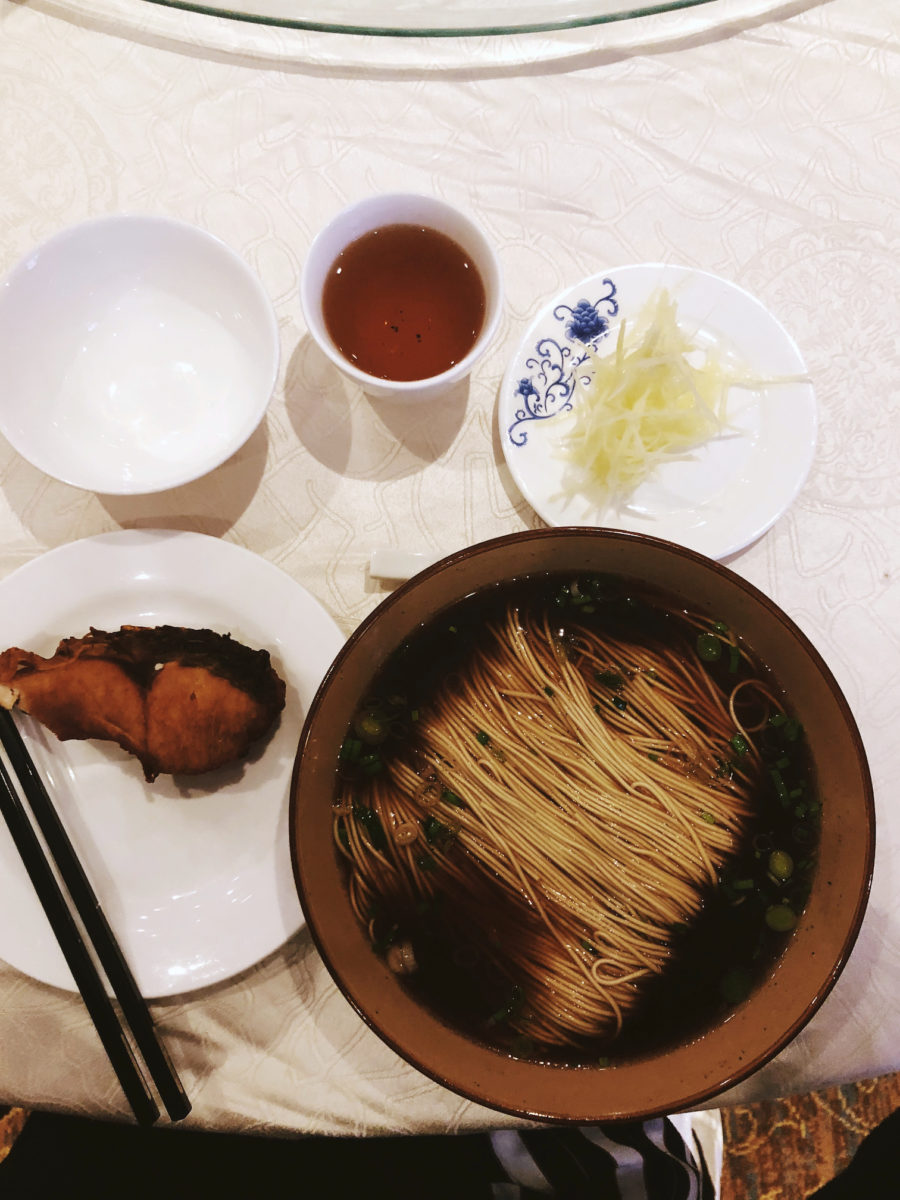 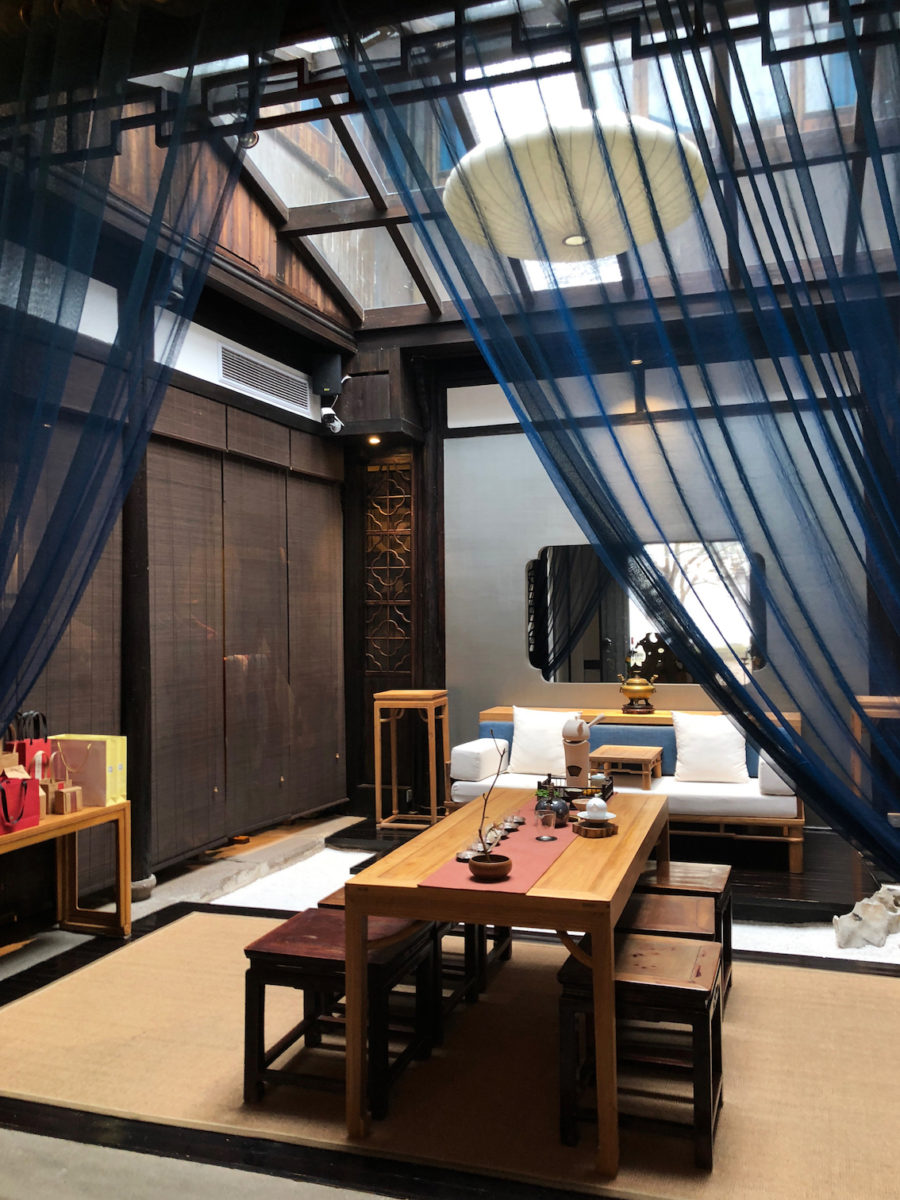 A vegetarian restaurant in Tong Li.

Food here is relatively light and meals are infused with plenty of vegetables. Leafy delicacies like mustard greens and pea shoots, grown and harvested locally, are sautéed with garlic and served as an accompaniment to proteins. Lake veggies all the way.

Rice is obviously the key ingredient in most Chinese cuisines (of which there are officially eight), but in Suzhou, it’s the rice dumplings that really stand out. Rice and pork (and sometimes other savory or sweet fillings) are hand-packed and rolled in bamboo leaf, tied up with string, and then steamed or boiled. The result is a delectable and transportable little snack package. Buy these from street vendors and look for the places with a bit of a line—local folks know where to find the best.