Where to See the Best Street Art in the World

Facade of the Women's Building on Clarion Alley in San Francisco. For decades, this mural-covered building has provided resources for women in the Mission District. Photo by Piermario Eva.
IndexFirozah Najmi

From graffiti to murals to stencils and wheatpasting, street art is everywhere. Here are our favorite underrated cities around the globe with loud and proud street art scenes.

You’re probably aware of the world-famous street art scenes in Brooklyn, London, and Miami, but street art is a global phenomenon. Whether it’s about celebrating one’s heritage or protesting against the government, artists around the world are painting their messages loud and clear on public canvases. Here are some of the best global cities to be dazzled by this radical art form.

Called the “stencil capital of the world,” Melbourne’s youth have been painting the town since the 1970s, inspired by the New York graffiti scene at the time. The primary neighborhoods to see street art here are in Fitzroy, Collingwood, and the Central Business District (CBD).

There’s Hosier Lane in the CBD with tons of eclectic graffiti competing for wall space, a Keith Haring mural on Johnston Street in Collingwood, AC/DC Lane with artwork of famous musicians, and much more. For a complete hit list, check out the City of Melbourne’s self-guided street art walking tour.

Hidden in the Laneways of Melbourne’s CBD: 5 Bars Worth Searching For → 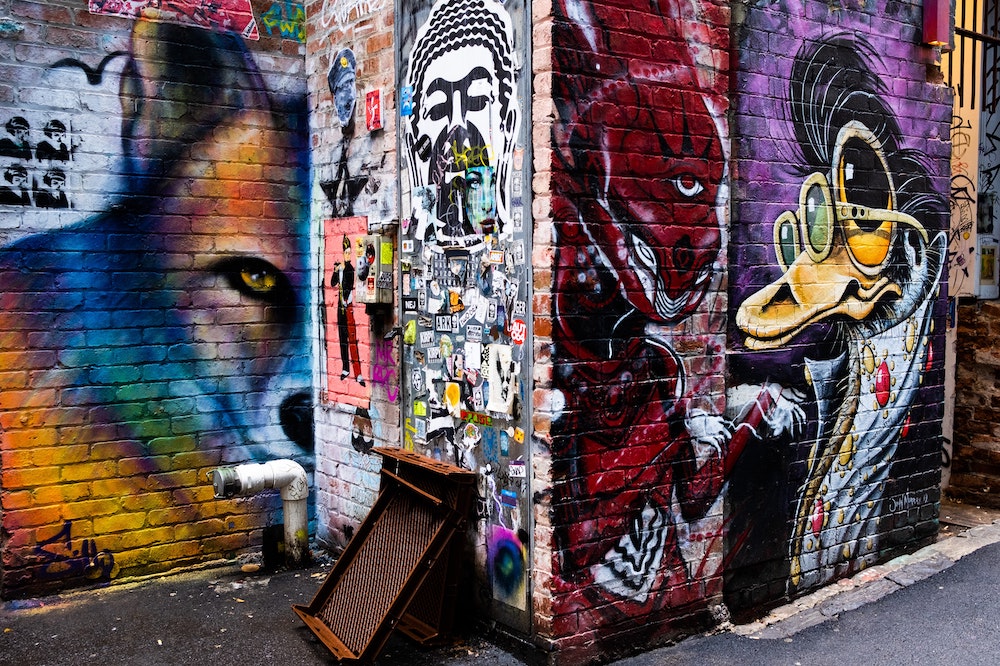 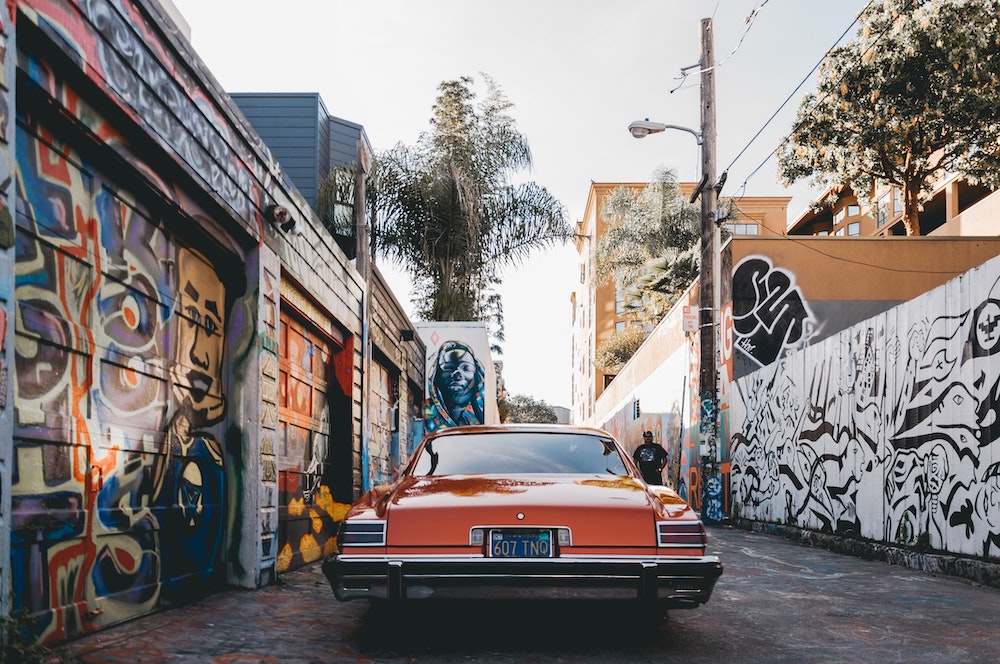 Most of the street art in San Francisco's Mission District speaks to Latinx heritage and social issues. Photo by Richard Lee.

The nonprofit Precita Eyes has done extensive cataloging of San Francisco’s street art, concentrated in the Mission District. The main hub is on 24th Street between Mission and York Streets. The art here doesn’t stay up forever and is constantly evolving—it’s usually political, celebrating Latinx resistance and making reference to the Mission’s rich history that predates San Francisco itself.

On Clarion Alley, messages of anti-racism and anti-gentrification cover the walls. On this street you’ll also find the Women’s Building—a historic women-led community center—which is the canvas for MaestraPeace (1993).

In the South Loop neighborhood of Chicago, most murals can be found on Wabash Avenue heading south from the Adams/Wabash L stop. There’s also the large-scale mural Big Walls in South Loop, organized by Columbia College Chicago and Wabash Arts Corridor in 2016. For a full map of South Loop’s murals, visit the WAC’s website.

In Pilsen, you’ll find works about Latinx pride, similar to the murals in San Francisco’s Mission District. A complete list of murals to be discovered in this district can be found on this WTTW neighborhood guide. You’ll notice minimal to no tagging on the murals in Pilsen as the neighborhood respects and celebrates these masterpieces. 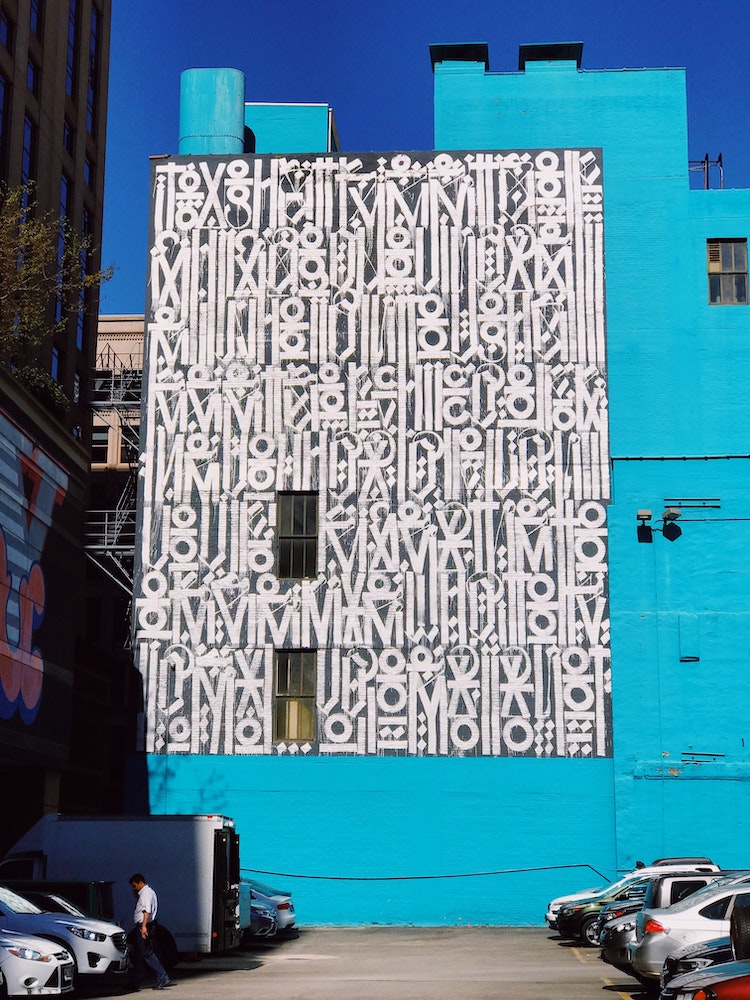 A black-and-white mural provides contrast against this bright blue facade in Chicago. Photo by Brandi Alexandra. 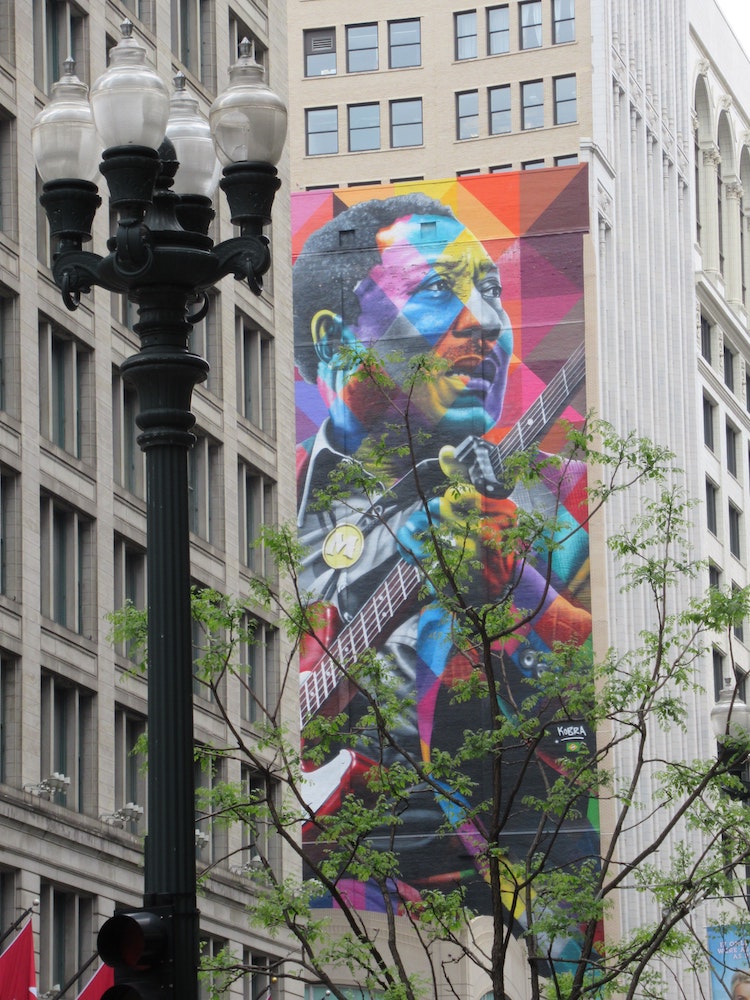 A 10-story mural of Muddy Waters by street artist Eduardo Kobra, located at the intersection of State and Washington Streets in Chicago. Photo by Steve Sharp. 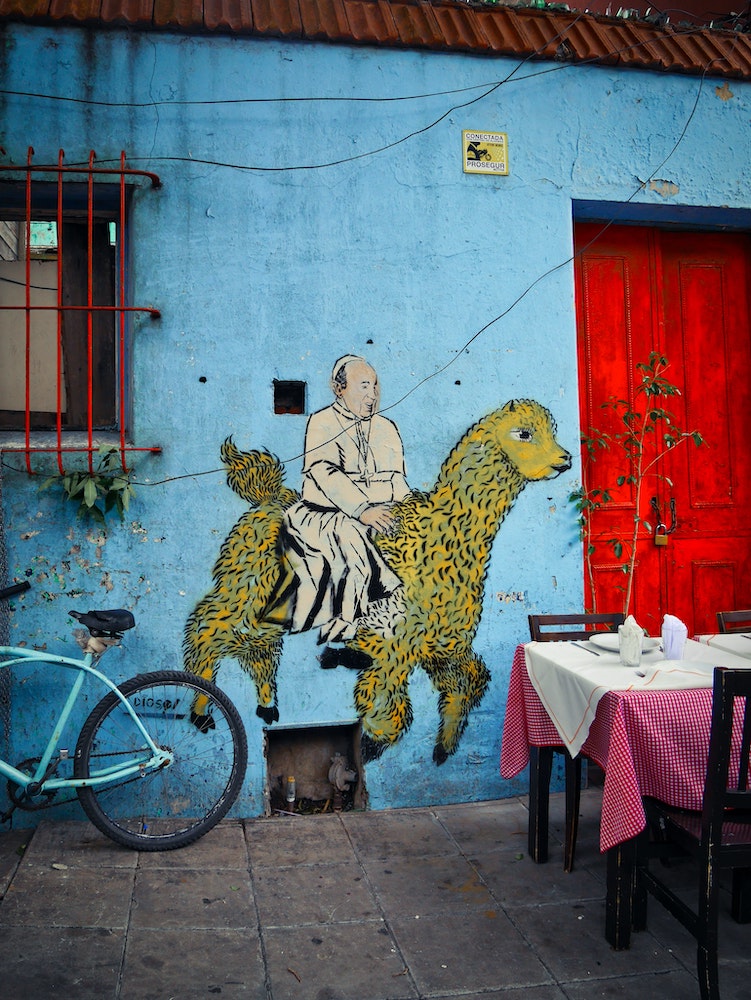 Subversive political takes are also a common theme in street around around the world. Pictured: the pope riding on a llama in Buenos Aires, Argentina. Photo by Tom Hopcraft.

These neighborhoods in Buenos Aires are now largely deserted from the military dictatorship that took place in the 70s and have become the canvases for large-scale murals by big name street artists like Blu, Martin Ron, and El Marian. Check out Hospital Pirovano which is covered in murals on three of its facades.

The organization Buenos Aires Street Art offers walking tours which go toward sponsoring future murals in the city. They have sponsored over 200 murals, including works by Luxor and Alfredo Segatori, and have a brick-and-mortar art gallery as well.

Called “Valpo” by locals, the street art movement here developed in resistance to the 17-year-long military rule of Pinochet. Today, all street art is legal in Valparaíso and the government outright promotes it—shops and restaurants are positively plastered in art and murals. The best place to see street art here is Templeman on Cerro Alegre. There’s also the outdoor Open Sky Museum in the Bellavista neighborhood which includes murals, mosaics, and graffiti by Roberto Matta, Mario Carreño, Pure Evil, Inti, Aislap, and the graffiti crew Un Kolor Distinto. 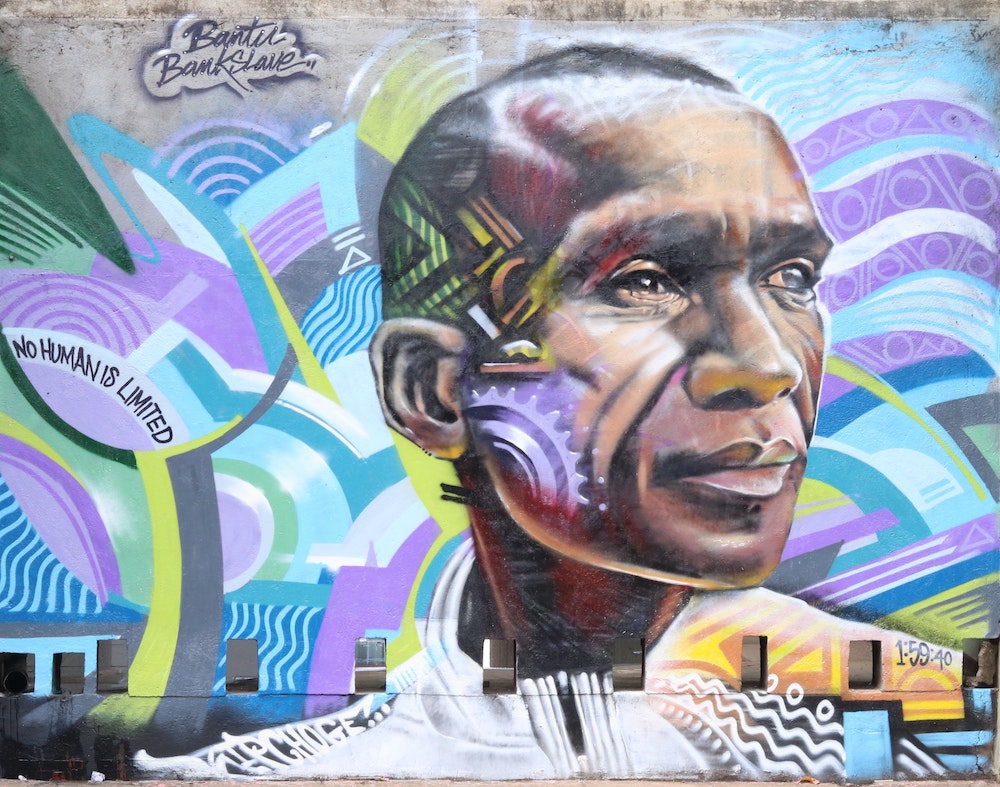 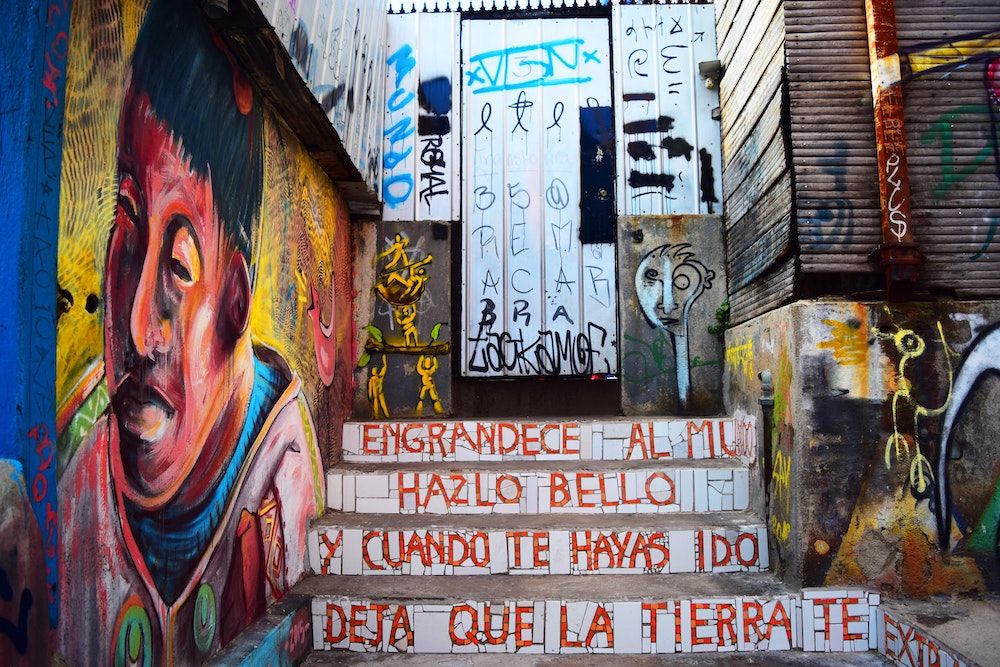 Mosaic art on a staircase in Valparaíso that reads: "Make the world great, make it beautiful, and when you are gone, let the earth miss you." Photo by Sifan Liu. 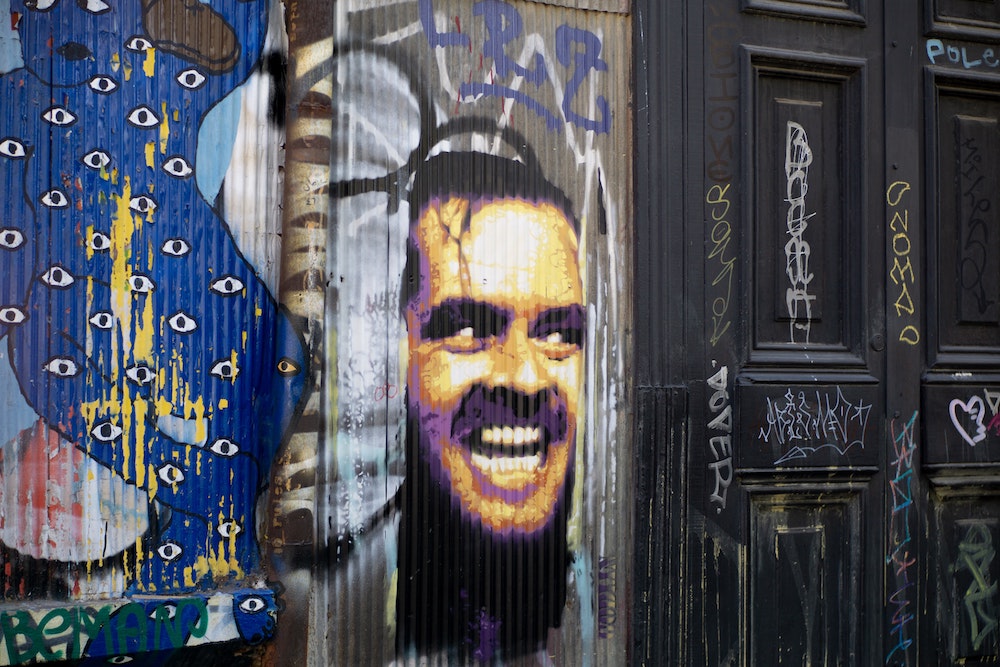 Though an excellent medium for serious self-expression, graffiti can be lighthearted, too. Here's a cheeky work of art in Valparaíso nodding at Jack Nicholson's famous performance in The Shining. Photo by Luis Villasmil.

Walk further down Haile Selassie Avenue to discover one of the biggest murals in all of Africa by Viktart Mwangi, painted on the facades of the Exte Coms House. On one facade is a woman carrying the weight of an enormous pineapple on her head; another features a mural of schoolgirls and sprinters; even more walls display large-scale portraits of strong, beautiful Kenyan women. 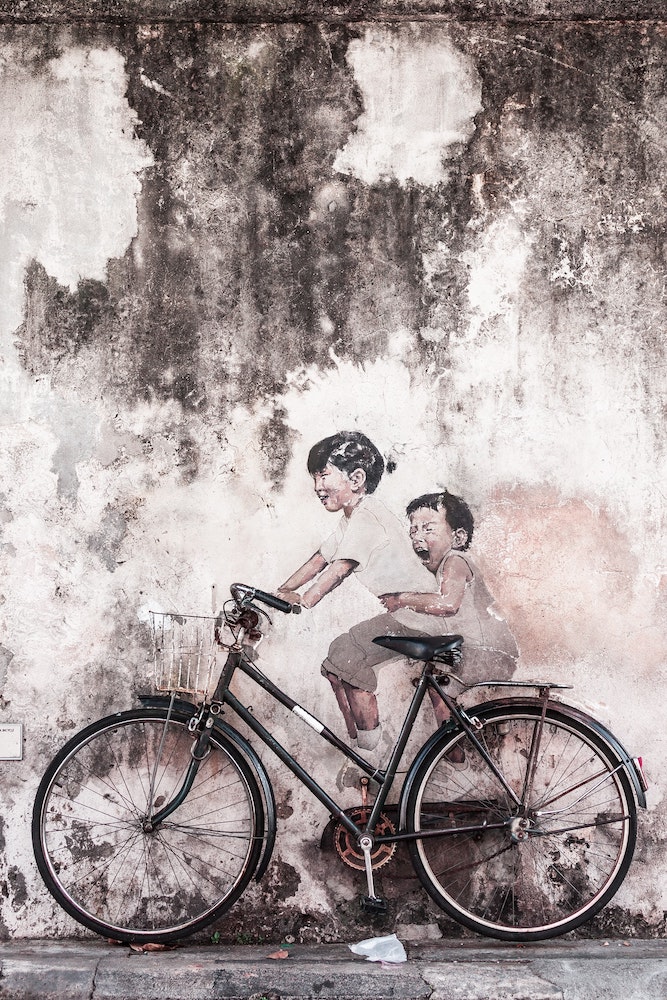 These works by Ernest Zacharevic in George Town, Malaysia use found objects that bring 2D art to life. Photo by Yaopey Yong. 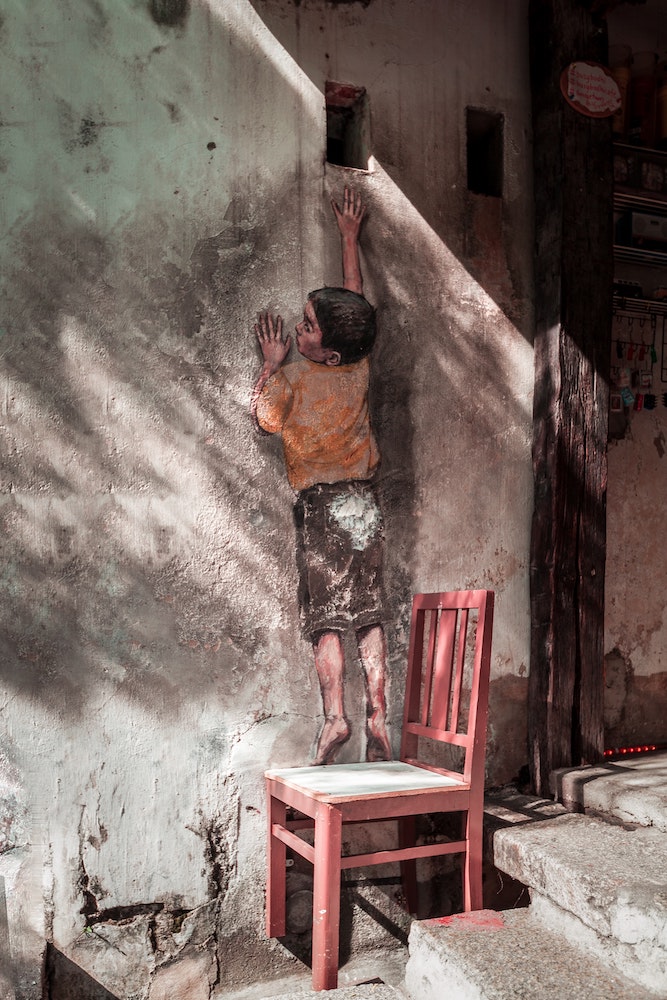 In this work by Zacharevic, a boy stands perched on a chair, reaching for a window. Photo by Yaopey Yong.

The capital of Penang, a state within Malaysia, boasts some of the best street art on the Asian continent. Walk through the Core Zone to find street art around practically every corner. One of the most impressive projects was produced by Kuala Lumpur-based art studio Sculptureatwork: Marking George Town, a 52-sculpture installation by local artists celebrating the city’s unique identity.

There are also a handful of murals by Lithuanian-born street artist Ernest Zacharevic that use 3D objects, like Kids On A Bicycle on Armenia Street, Old Motorcycle on Ah Quee Street, and Boy On A Chair on Cannon Street.