How to Spend a Long Weekend in St. Louis, Missouri

The iconic Gateway Arch in St. Louis may attract tourists in droves—but it's worth the hype.
IndexAlly Betker

This week, Here editors share guides to the places they grew up. See Editorial Director Ally Betker’s guide to St. Louis, Missouri—including where to stay, eat, drink, and what to do in the Gateway to the West.

Growing up in St. Louis, Missouri, was the stuff of cheesy suburban family sitcoms. I went to high school football games on Friday nights, spent weekend afternoons hanging out at the mall, and loved nothing more than a good house party.

I left for school when I was 18, which means I hadn’t quite yet honed my interest in food and the arts. Luckily, I’ve made it back to the midwest twice a year since, and have been collecting recommendations during each visit. 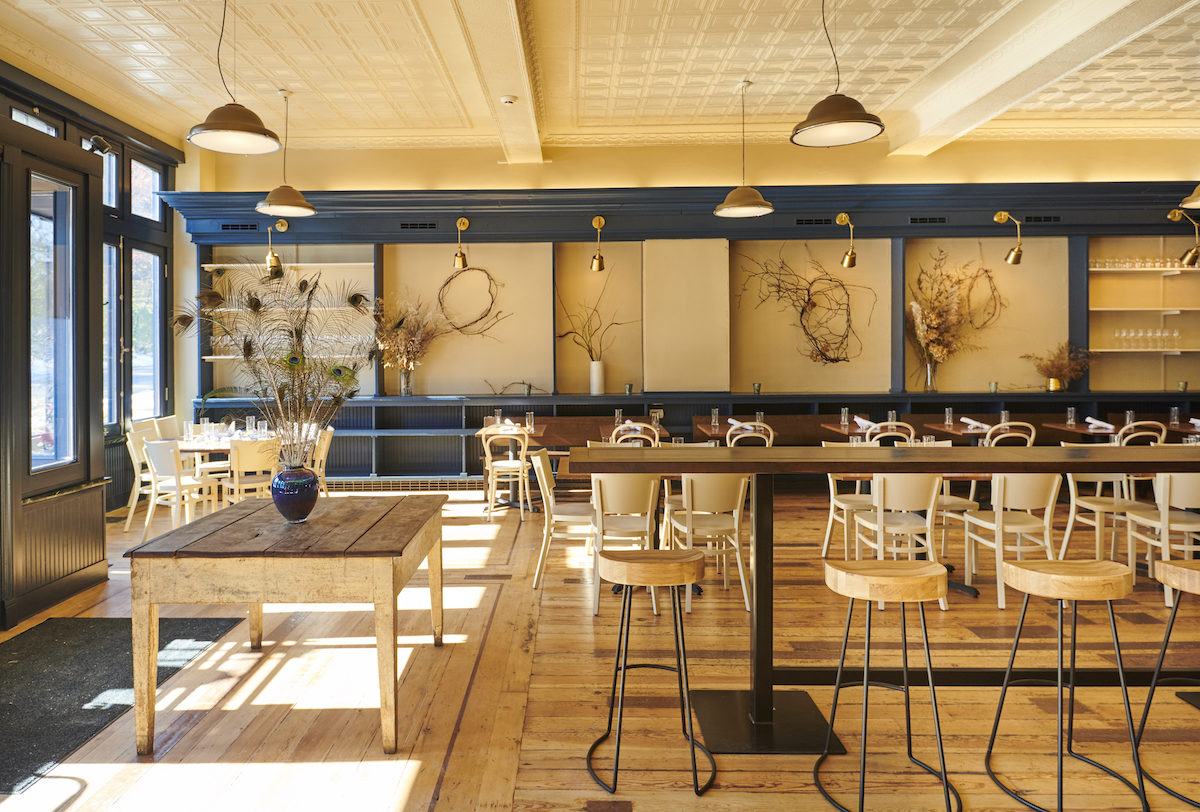 Winslow's Table is just one of many recently-opened restaurants making a name for the St. Louis dining scene.

Lately, my iPhone note of places to check out keeps growing, particularly in the restaurant space: Savage and Balkan Treat Box were named to Bon Appetit’s 50 Best Restaurants List this year; Cinder House, Nixta, and Winslow’s Table are also at the top of my list.

I’m happy to see my hometown picking itself up and dusting off. Though growth stagnated during much of the late 21st century, much of the city is currently undergoing a renaissance, as businesses such as Microsoft open offices, and tech incubators like the Cortex Innovation Community attract young entrepreneurs. St. Louis has always been a good place for families; now, there are more opportunities for young people too.

That’s not to say St. Louis isn’t still working to improve, especially as racial and economic inequalities remain an ongoing topic of conversation. But, it’s the push-pull of progress that tends to make for the most interesting places. 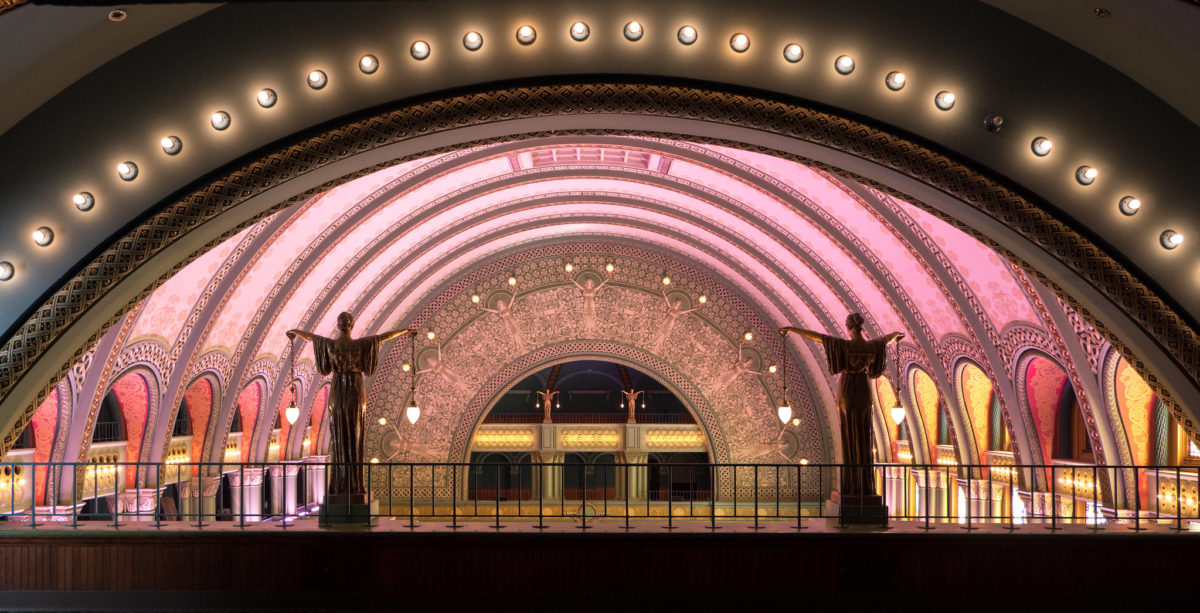 Union Station Hotel in St. Louis used to be one of the busiest train stations in the country. Photo by Jonathan Cutrer.

Where to Stay in St. Louis

I’d happily invite everyone to stay at my parent’s house in Webster Groves, but I’m not sure the offerings are as nice as Hotel Saint Louis, a 1893 historic landmark building designed by the architect Louis Sullivan, who’s considered the creator of the modern skyscraper. After a multi-million dollar renovation, the hotel opened under the Marriott Autograph Collection in 2018. There’s a rooftop bar and pool, ground level restaurant, and a spa—all in the heart of downtown and close to the hits like the Gateway Arch and Busch Stadium.

In the early 1900s this was one of the busiest train stations in the country. Now, it’s a hotel, shopping center, and entertainment complex. Come Christmas, it will also house St. Louis’s first aquarium. The breathtaking lobby ceiling gives Grand Central a run for its money. 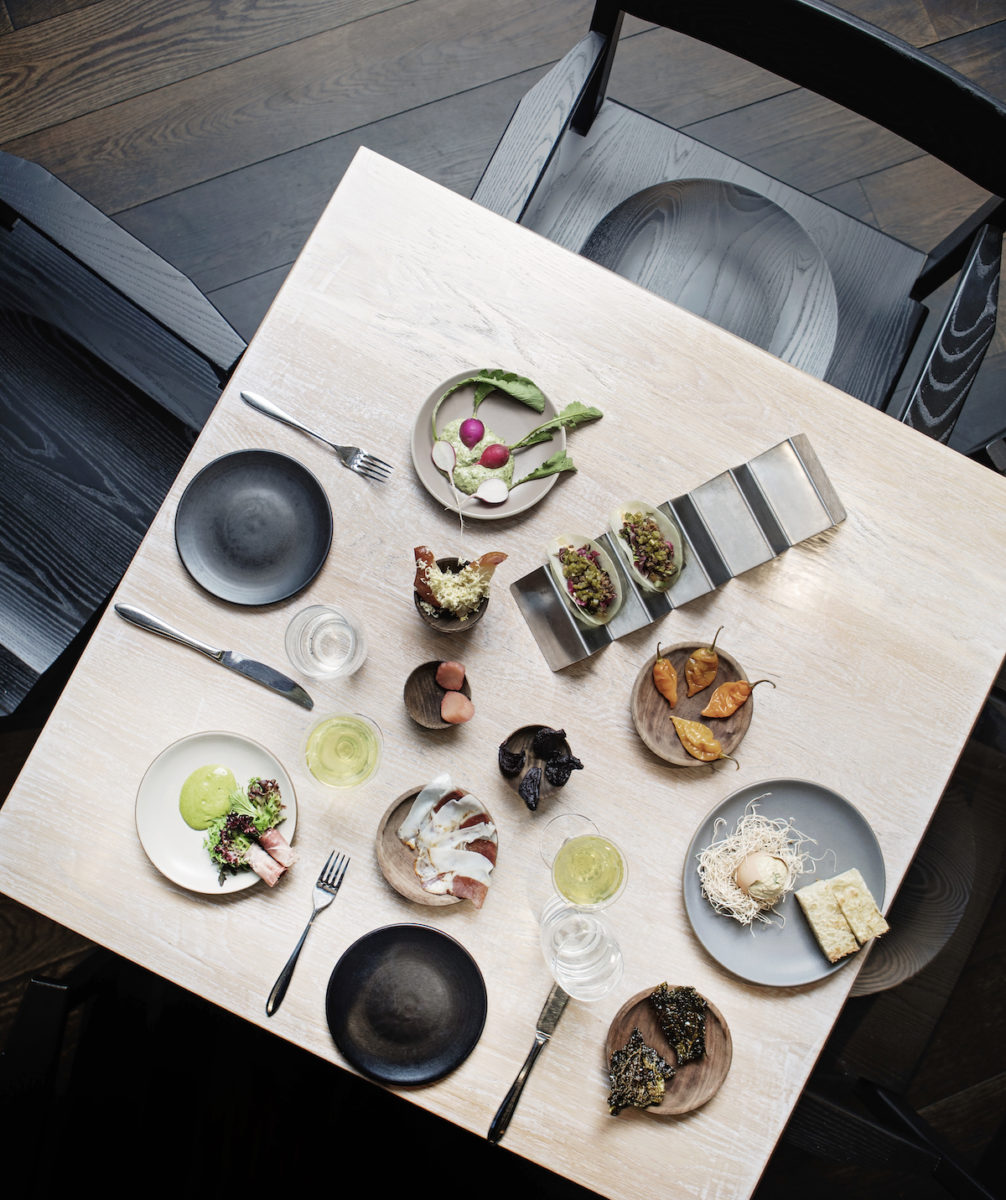 The casual yet elevated cuisine at Vicia. 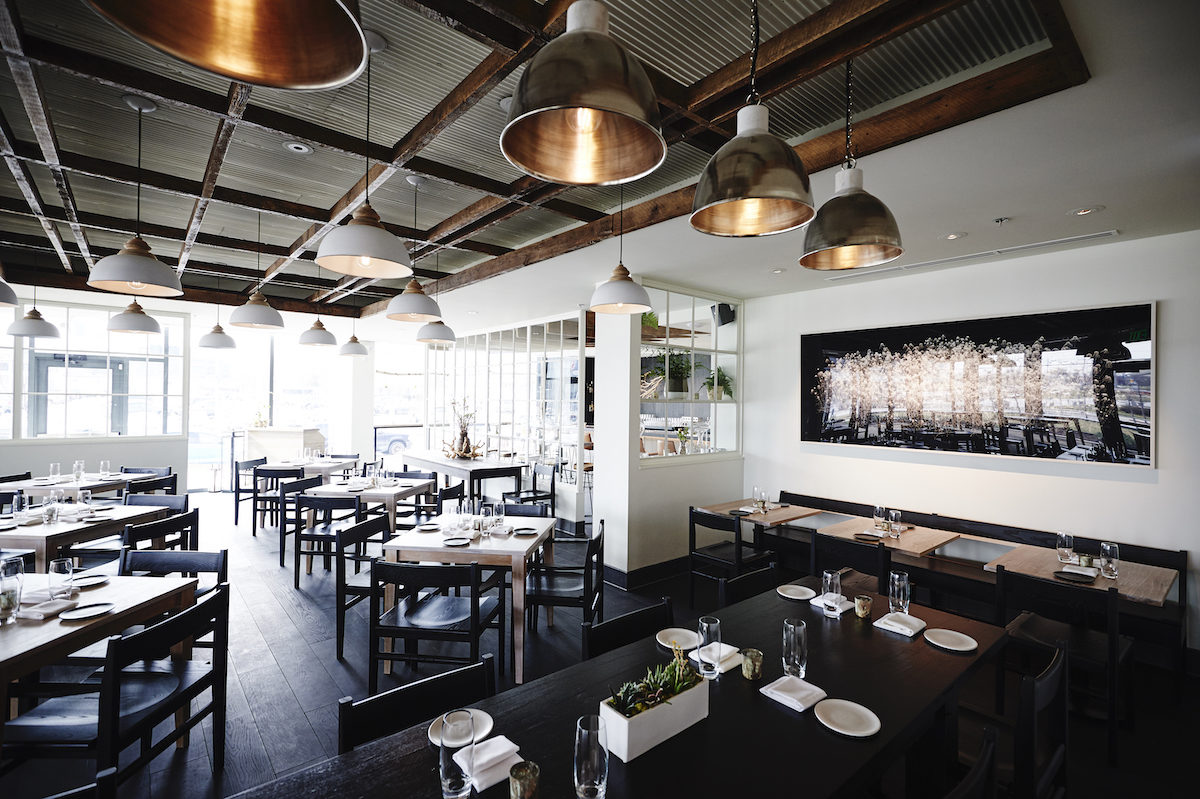 The interior at Vicia lends an air of sophistication to the St. Louis dining scene.

Where to Eat in St. Louis

Michael and Tara Gallina met at Dan Barber’s acclaimed Blue Hill Stone Barn in upstate New York before launching a series of pop up restaurants and then settling down in St. Louis. Their farm-to-table restaurant, Vicia, opened in 2017 and the veggie-forward menu features items like kohlrabi shell tacos, chicken fried carrots, and creamy Missouri rice with oyster mushrooms and sunchokes. The room is also one of St. Louis’s more elevated, and once you add in the wine list, Vicia becomes a must-visit. The couple also recently opened a second restaurant, Winslow’s Table.

A place that opens at 7 a.m. and closes at 4 p.m. is the right place for breakfast and lunch. This Benton Park spot appears a little crazy on the weekends, but you order at the counter and the line moves quickly. Standouts include the breakfast burrito with vegetarian black bean chili; the breakfast sandwich with eggs, goat cheese, and beet chutney; or the grits and greens with pork confit. 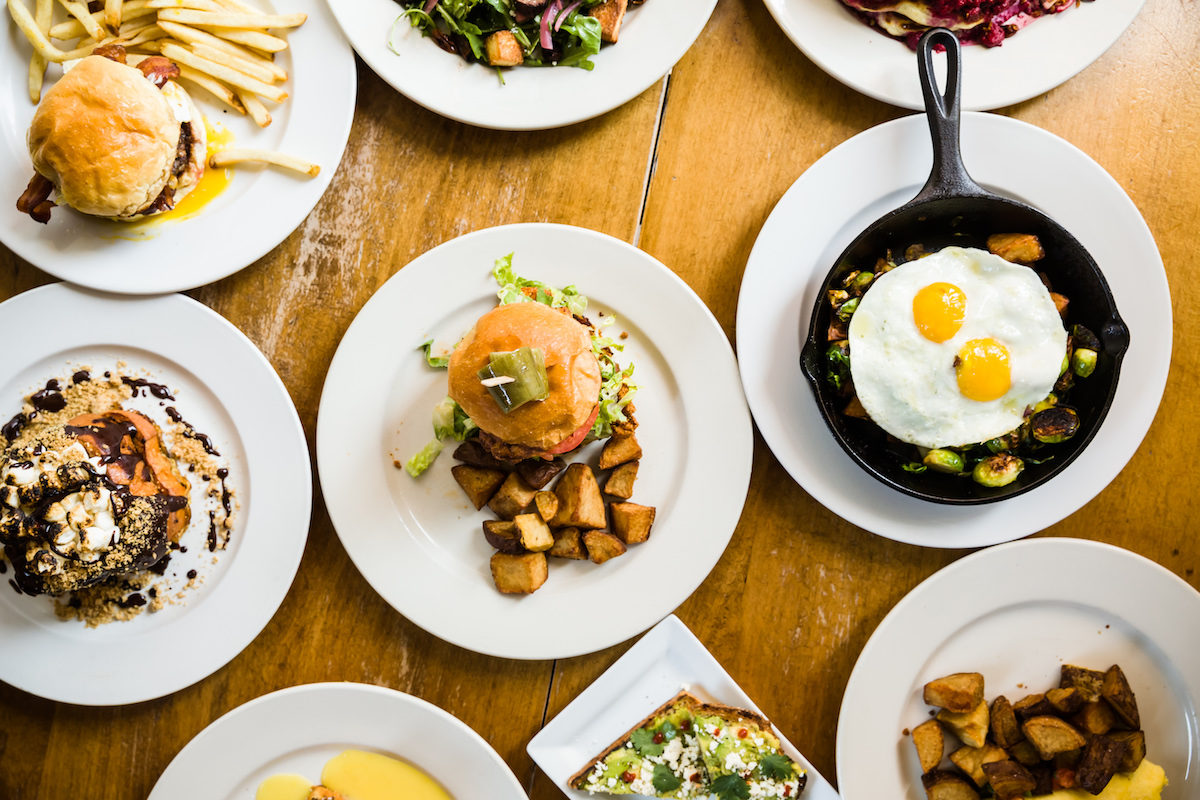 You don't want to miss brunch at Half & Half in St. Louis.

A welcome brunch addition to my parent’s town of Webster Groves (with a second outpost in Clayton)—just make sure to leave time for the wait. The menu is equal parts sweet and savory, making this an ideal spot for groups. My go-to is the veggie hash with Brussels sprouts, spinach, onions, and potatoes. You can find my mom over on the sweet side, ordering the s’mores French toast or the pancakes with raspberry, mascarpone, and granola. 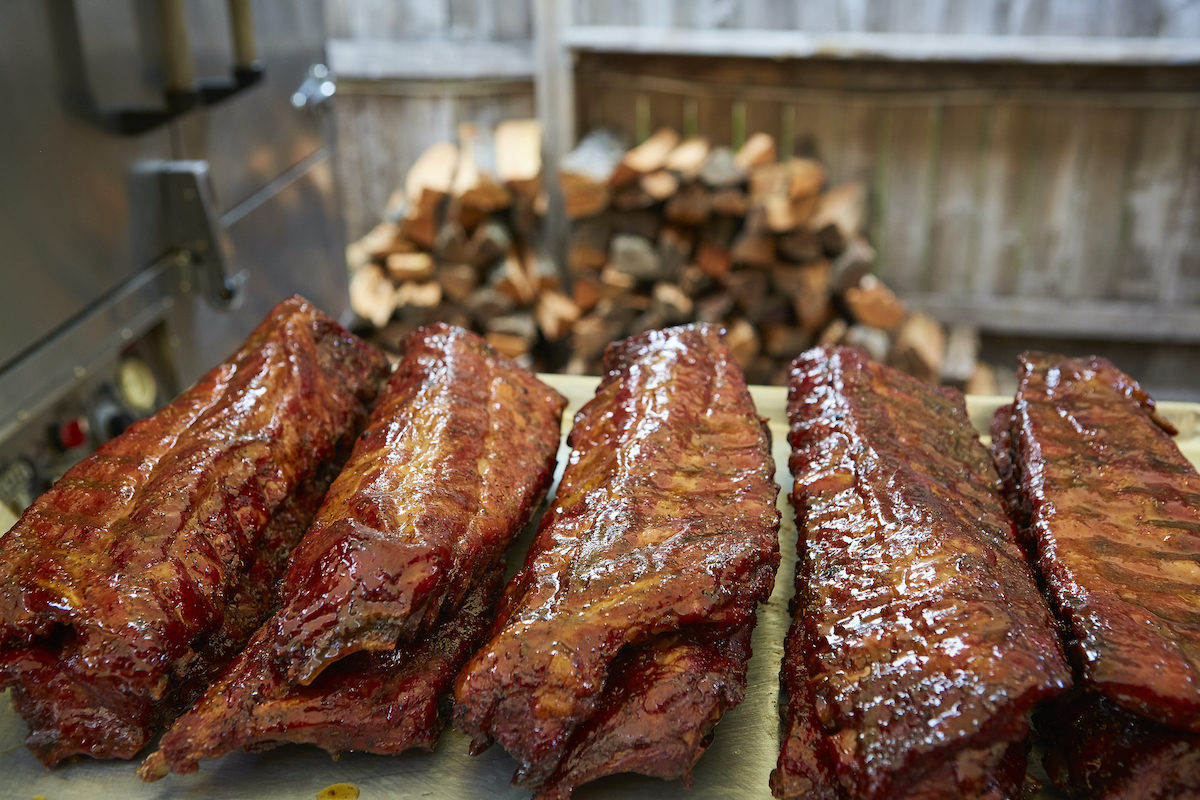 St. Louis is known for its pork ribs, and there are a number of excellent BBQ spots around town where you can get your fix (in addition to pulled pork, brisket, and mac n’ cheese—the typical delicious offerings). Bogart’s is no fuss, with formica tables and kitschy wall decor, featuring lots of Anheuser Busch paraphernalia. Order a plate or a sandwich with your choice of meat and load up on sides. Note: St. Louis is also known for its toasted ravioli (found at Imo’s Pizza), gooey butter cake (yes, you read that right and it’s delicious), and frozen custard (Ted Drewes is the spot). 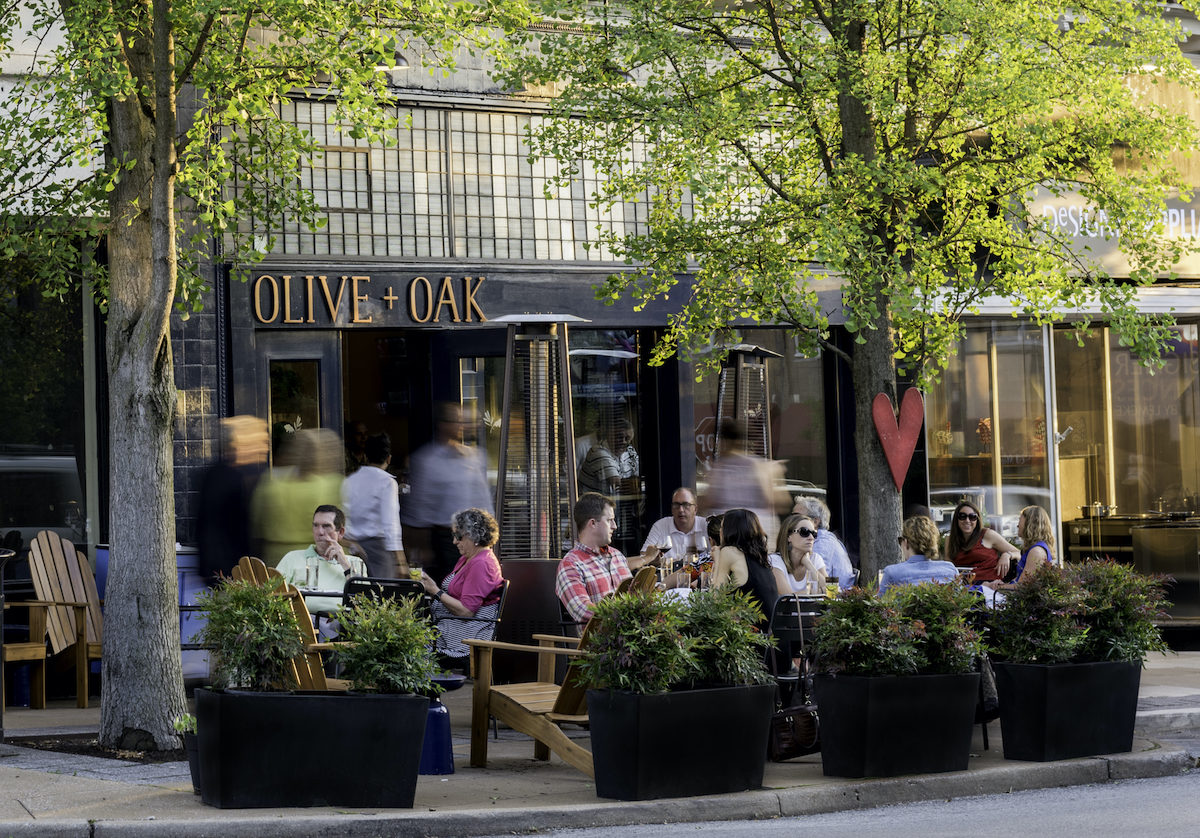 A cozy neighborhood spot that is a four minute drive from my parents’ house (Webster Groves is on the up and up and I am here for it!). Executive chef Jesse Mendica was a semifinalist for Best Chef Midwest in the 2019 James Beard Foundation Awards, and she’s cooking up items like chicken wings with a maple red curry glaze, beef tenderloin with espresso rub, and spaghetti squash with roasted garlic. The room is ideal for families, couples, or a group of friends—in other words, everyone. 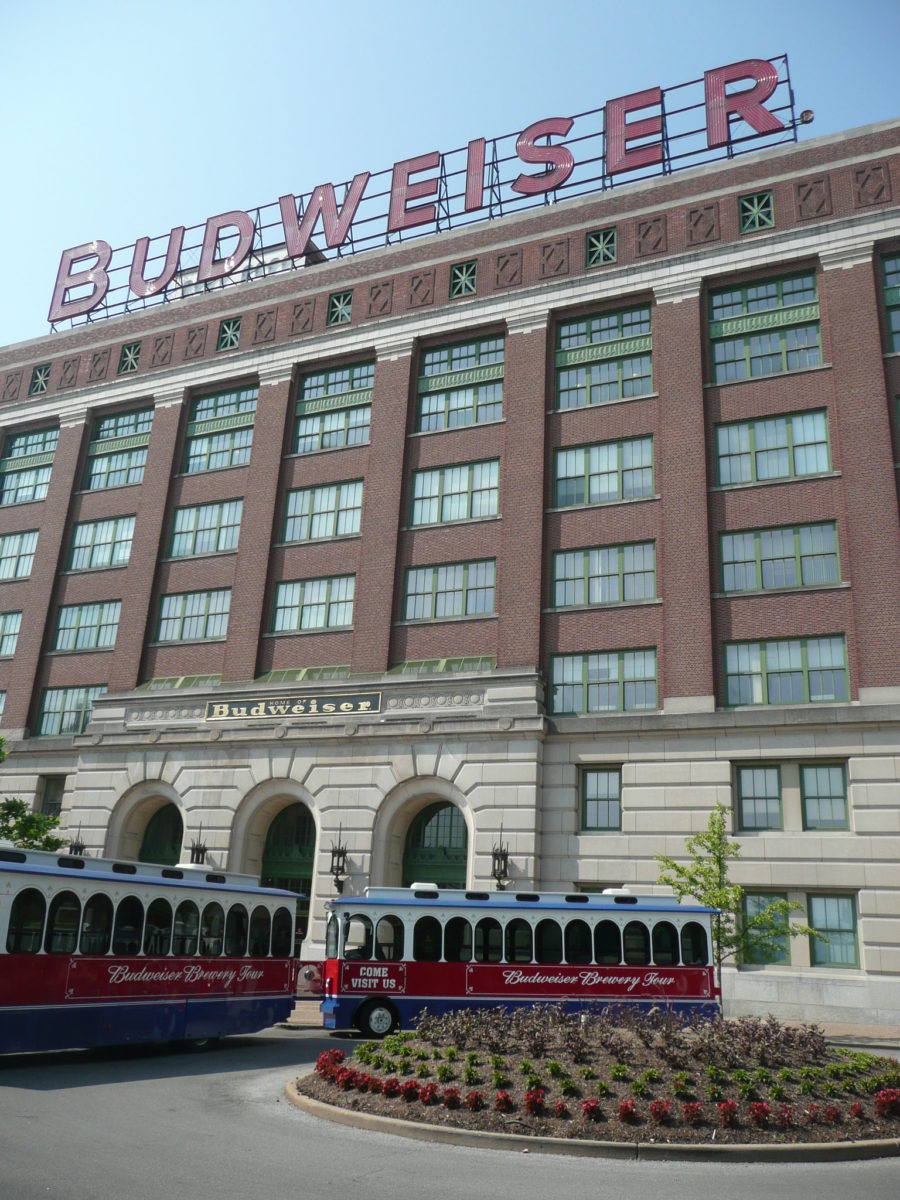 One of St. Louis's main tourist attractions, the Budweiser Brewery packs a punch—just don't skimp on the more indie spots listed below. Photo by Reading Tom.

Where to Drink in St. Louis

I’m not really a beer gal, but there are tons of places to drink it in St. Louis if you are: 4 Hands Brewing Company, Urban Chestnut Brewing Company, and Schlafly are favorites among the microbrewing fans, and then of course there’s the Anheuser-Busch Brewery, which is the tourist attraction and has been open since 1852. (Fun fact: the brewery opened here for proximity to the Mississippi River and the nearby natural caves that provided refrigeration). If I had to choose I’d go Urban Chestnut, which has a lovely beer garden with live music, and a tasty line of ciders ;). 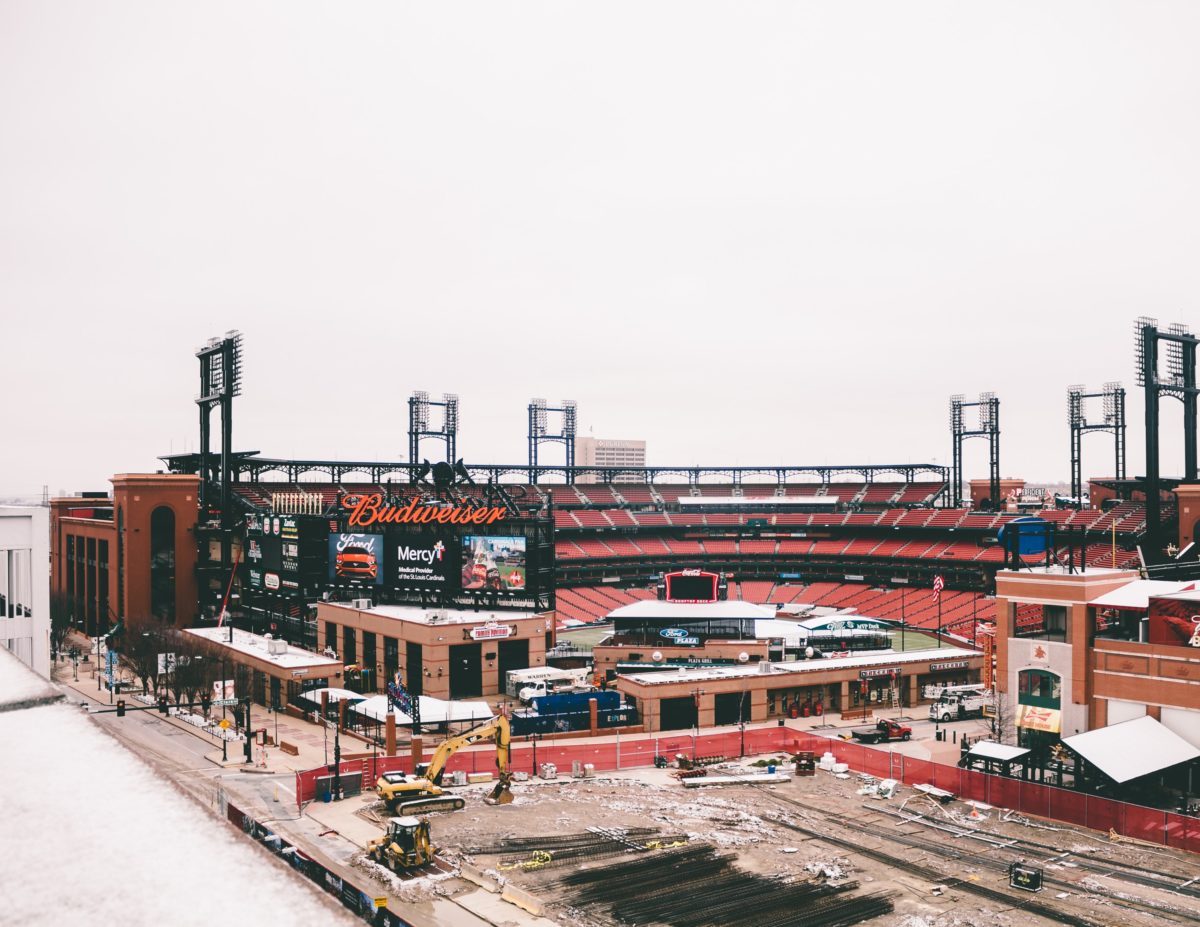 A Cardinals game in St. Louis is classic, but a view of the stadium from The Gateway Arch can be just as satisfying.

What to Do in St. Louis

One of the newest additions to The Loop, a six-block row of restaurants, bars, live-music venues, and hotels. King Princess, Rick Ross, and Sum 41 all have shows on the upcoming lineup—and if that isn’t variety, I don’t know what is. Blueberry Hill Duck Room and The Pageant are two other top venues in St. Louis, found in The Loop. Before a show, grab a bite at Mission Taco, or a drink at the rooftop bar at the Moonrise Hotel, which features the world’s largest revolving man-made moon. It’s 3,000 pounds.

Yes, it’s touristy, but everyone I’ve taken here as been genuinely impressed! The 630-foot “Gateway to the West” is a good time. Spend an hour or two in the recently-renovated museum at the basement level to get your history fix, then take a ride in the five-person pods to the top, where you can look out over the Mississippi River and Busch Stadium (Go Cards!). The part-elevator, part-escalator, part-Ferris wheel system that allows for the pods to smoothly transport passengers to the top was apparently a revelation during its design. And if that doesn’t pique your interest, know that it’s the tallest man-made monument in the Western hemisphere. 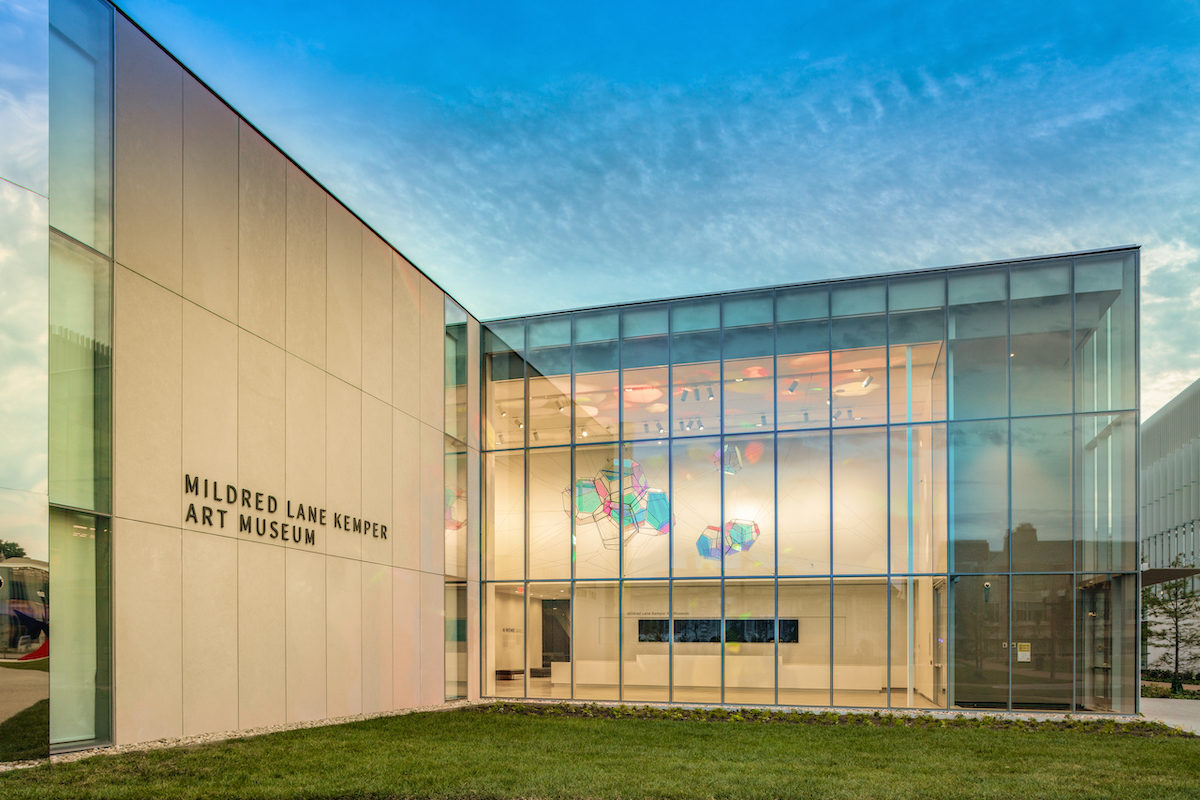 Washington University’s Mildred Lane Kemper Art Museum dates back to 1881, with the founding of the St. Louis School and Museum of Fine Arts. The museum’s permanent collection—featuring works by Doug Aitken, Max Beckmann, and Catherine Opie, among others—is worth the visit, but it’s the exhibitions that really shine here. Recently, Ai Wei Wei staged his first ever major institutional exhibit in the Midwest here, which also marked Kemper’s expansion and renovation.

The Muny = my childhood. My sister and I grew up going to musicals at this 11,000 seat outdoor theater in Forest Park (which my mom always points out is bigger than New York’s Central Park). I can safely credit my love of theater to these muggy summer nights, watching shows like Peter Pan and Joseph and the Amazing Technicolor Dreamcoat. The theater has since installed industrial fans to help with the heat, but the magic has remained exactly the same. 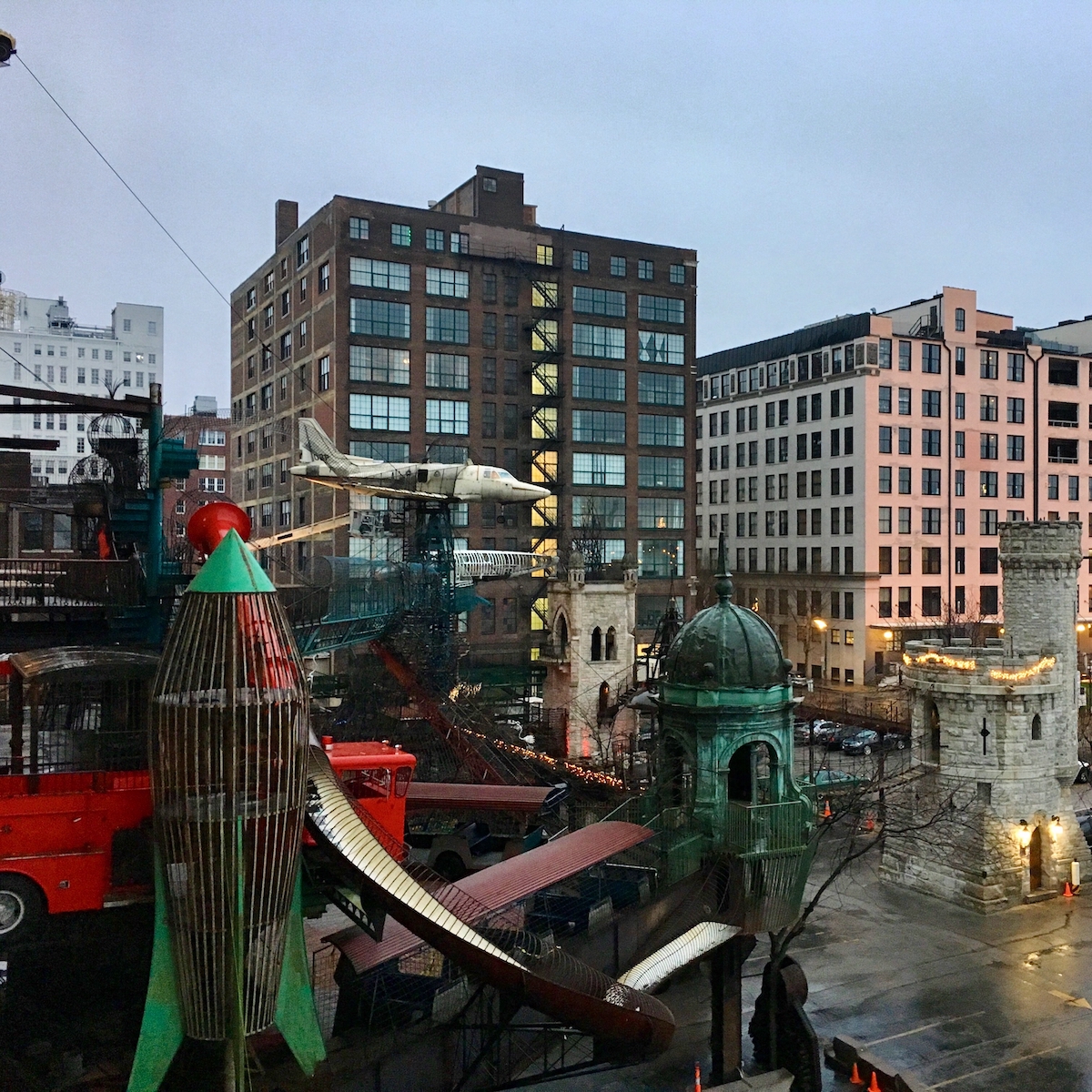 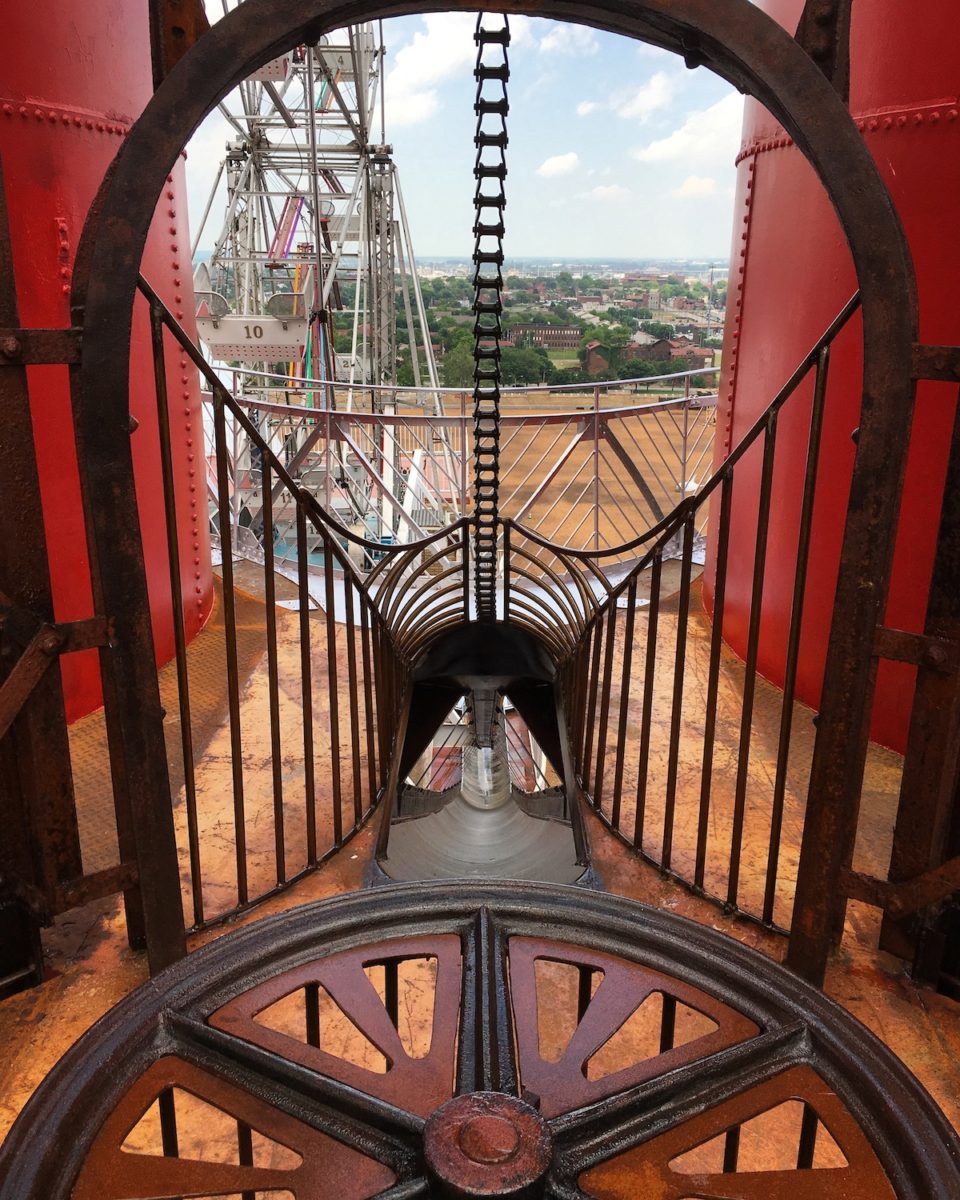 It's a slide. Take our word for it. Photo courtesy of the City Museum.

It’s hard to put the City Museum into words. It’s more like a giant jungle gym for both children and adults, created using repurposed industrial materials. There’s a section designed to look like a skate park, a sort of cave of wonders, a giant slide, a rooftop with a school bus and a Ferris wheel, and lots and lots of crawl spaces. Just go.

Designed by Pritzker prize-winning architect Tadao Ando, this small museum is punching way above its weight. Featuring exhibits from artists like Ruth Asawa and Glenn Ligon, the building was also designed around two permanent commissioned works by Ellsworth Kelly and Richard Serra. Combine this stop with the Contemporary Art Museum next door, which has previously staged exhibits from Cindy Sherman and Amy Sherald.