Bionca Smith has been traveling with her son, Carter, in their camper van for two years. Photo via @offthegridwithakid.
IndexHannah Freedman

Single parent families now make up about 30% of households worldwide, and as single parent and avid traveler Evie Farrell notes, “Solo parents, because our lives are often even busier and more stressful, can often benefit the most from getting away and spending time with our children in a relaxed environment.”

While stereotypes and assumptions about single parents abound, many of these are not only flat out wrong, but they also miss that the majority of single parents in the US are actually mothers 35 and older with stable jobs. In other words, they have the means to take family vacations and are becoming a niche market in the travel industry. 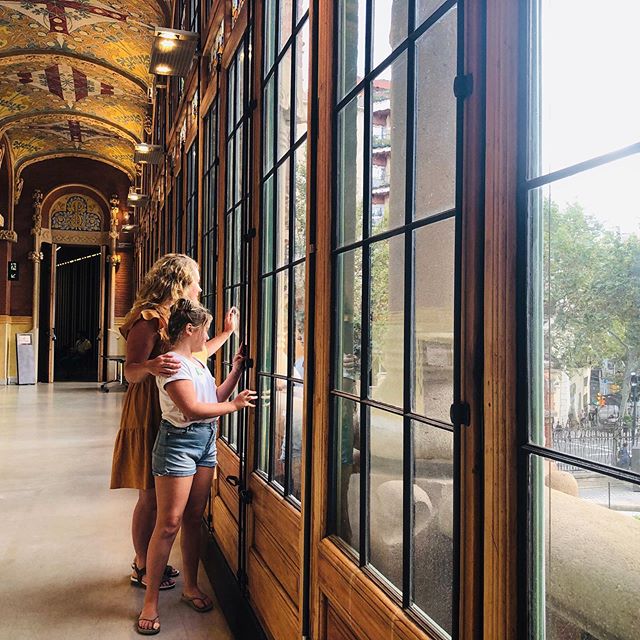 Evie Farrell with her daughter in Barcelona, Spain. Photo via @mumpacktravel.

From hotel packages to cruise lines, many places within the travel industry are starting to offer single parent discounts and programming aimed at making travel for these families both more affordable and comfortable. Intrepid Travel, a small group adventure travel company has even launched a whole offering of Solo Parent Family Vacation tours.

Leigh Barnes, Chief Customer Officer of Intrepid Group sees these new tours as vital to the market. “As single parent households are increasing in North America, it’s time for the travel industry to take notice and ensure all kinds of families are being accommodated and are being offered travel opportunities that are fun, adventurous, and affordable,” she explains.

Barnes also reiterates Farrell’s point about relaxation: “These itineraries provide parents with some much-deserved rest and relaxation, while taking the pressure off them to plan and entertain at all times.” 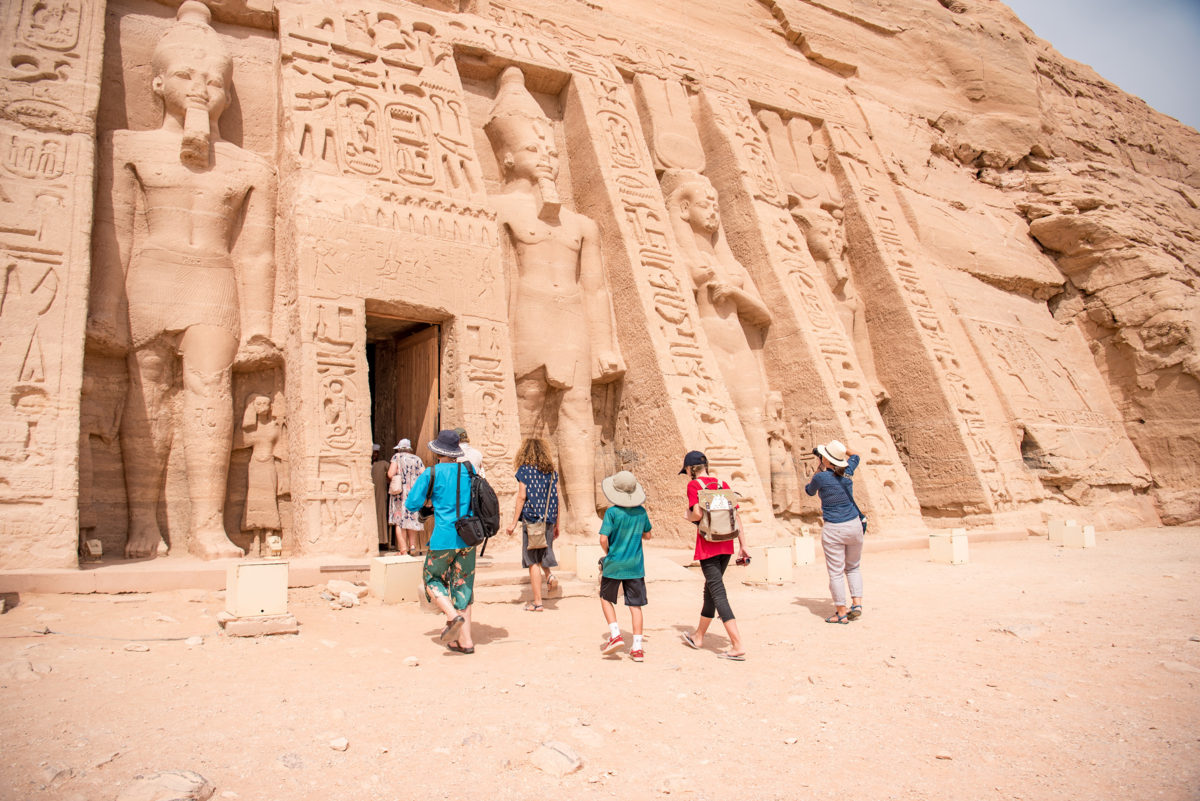 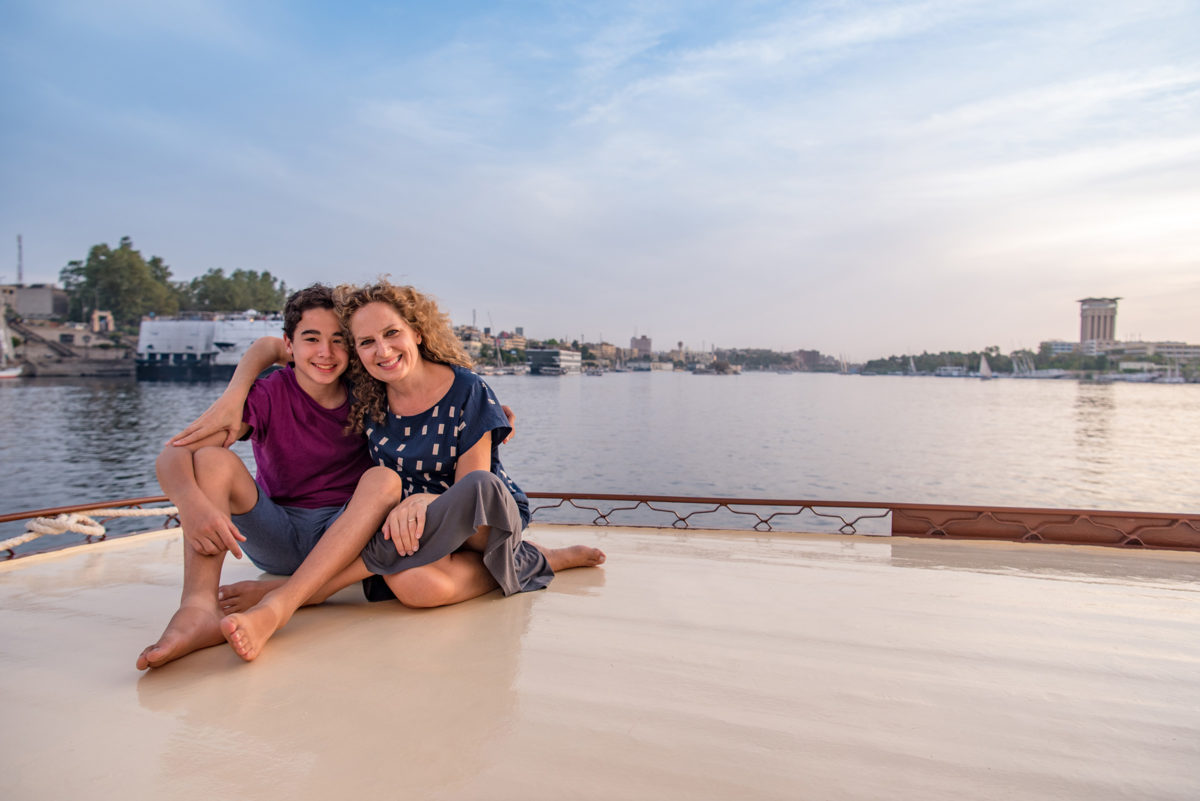 Akbar and her son in Egypt on an Intrepid Travel group trip for single parents and their kids.

Alev Aktar, a newly single mom after a recent divorce, opted to head out on Intrepid’s solo parent trip to Egypt with her teenage son and touts the benefits she found on such a vacation. “The mothers immediately bonded and spent hours talking about everything from divorce and dating to their favorite travel destinations,” she explains. “At the same time, my son had six different kids to hang out with, so he was always occupied.”

Despite the new offerings popping up, traveling alone with kids can be difficult. Here are five tips to help make it a little easier. 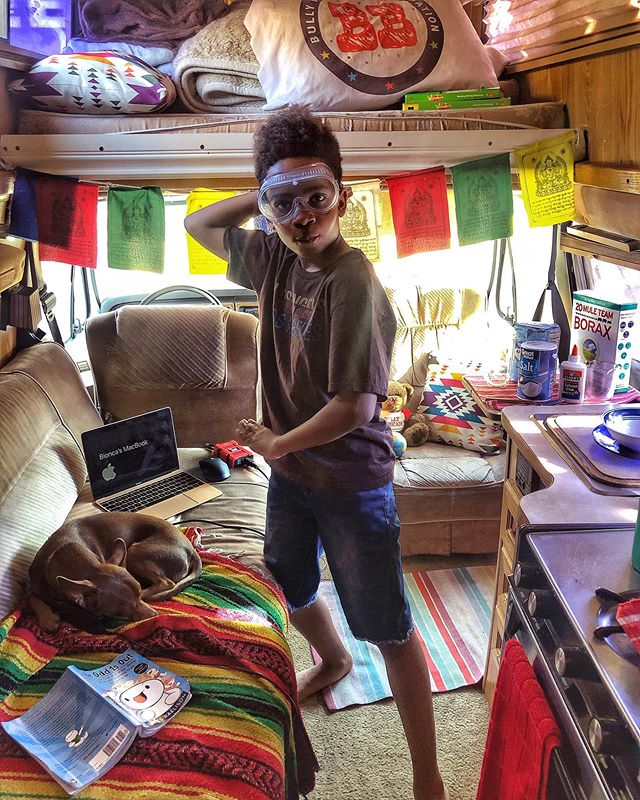 Carter completes his science homework on the road with mom. Photo via @offthegridwithakid. 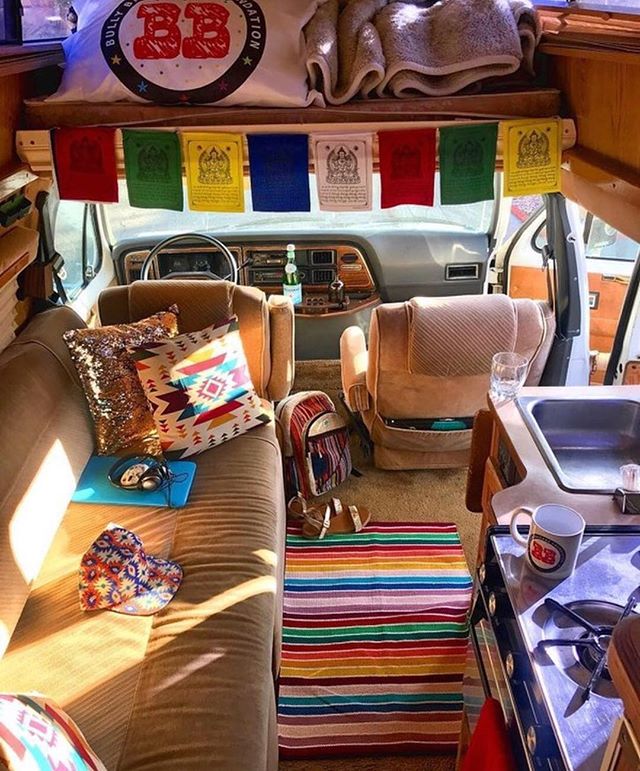 The mother-son duo call their camper the Magic School Bus (and do a deep cleaning once per week). Photo via @offthegridwithakid.

1. Don’t be Afraid to Ask for Help

Farrell left her job to backpack the globe for over two years as a single mom along with her daughter Emmie, documenting their trip on @mumpacktravel and ultimately even writing a book about their journey. She found that sharing her status as a single mom actually helped her get the best care on their trips. “We noticed, especially in Asia, that when people found out it was just me and Emmie, they were actually even more helpful. I feel like you get really looked after when you’re traveling as a solo parent,” she says.

“You get really looked after when you’re traveling as a solo parent.”

Similarly, don’t be afraid to ask friends and family for help. Bionca Smith, the single mother behind the Instagram account @offthegridwithakid, who travels across the US in a van with Carter, her 11-year-old son, jokes, “If you want to date, you’ll need to find a family member or close friend to assist as a babysitter.” She also notes that she wishes more hotels and public places had areas designed where parents can work while watching their kids play and socialize.

That’s another great reason to not only take advantage of group trips, but to also lean on the other parents on those group trips. “The parents definitely helped each other out,” says Aktar, referring to her Egypt trip. “For instance, if someone needed to run out to the market or take a nap, another mom would volunteer to watch her child at the pool. There was a sense of us being a cohesive group.” 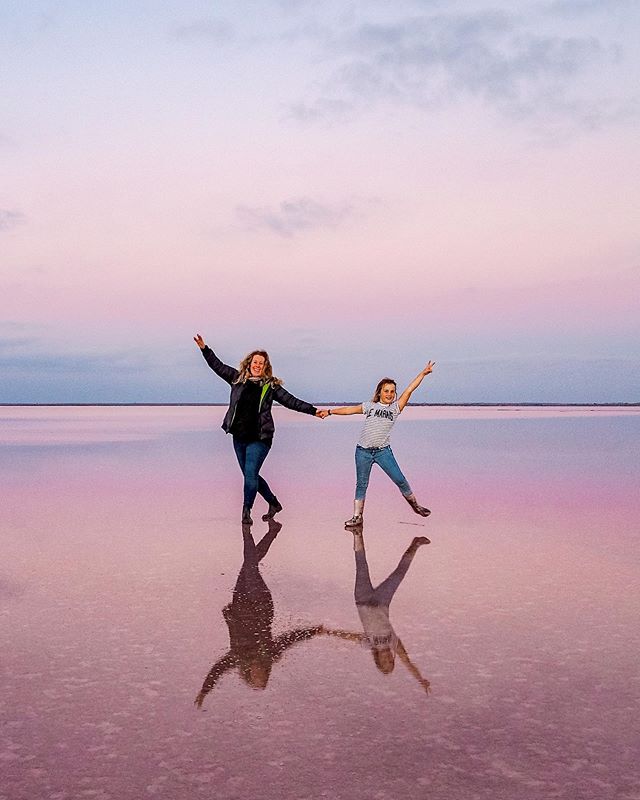 Farrell and her daughter on Lake Tyrell in Australia. Photo via @mumpacktravel.

2. Take Advantage of Deals and Offerings

As already mentioned, hotels, cruise lines and tour operators and starting to offer discounts and packages specific to single parent travelers. But don’t forget that sniffing out the best deals also takes time. As Smith says, “You are going to become a part-time travel agent always looking for all the best deals and times to leave. Add these hours to your schedule because traveling smart and strategically will save you money and time.”

And don’t forget to take advantage of offerings that can help you out even if they aren’t just geared to single parents. More and more hotels are offering babysitting services, which can give solo parents some much needed time off the parental clock. Even certain airlines like Etihad offer nannies with higher class tickets, and airports around the world have better play areas and better entertainment for kids popping up. 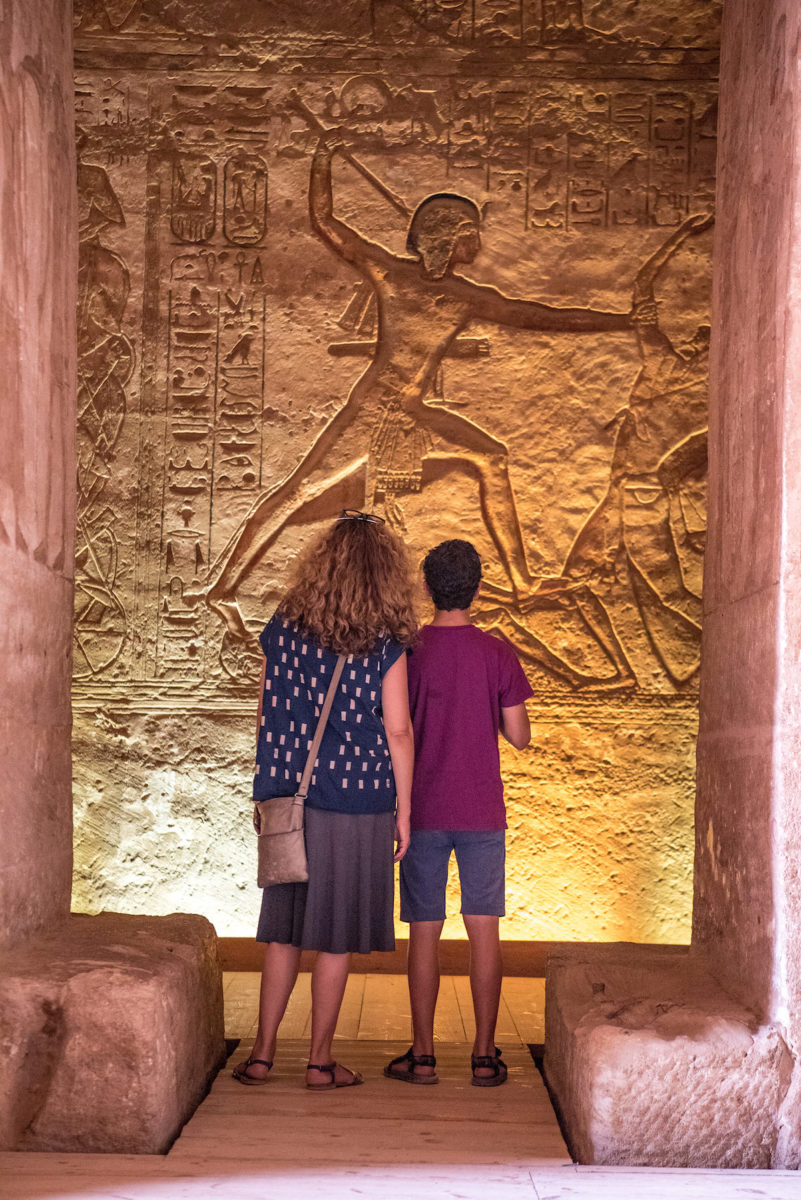 Safety is always key when traveling, no matter what. Traveling alone with kids means you don’t have another adult present with an extra set of eyes or who knows where you will be and when in case anything goes wrong.  Smith recommends a simple but effective solution. “Share your location indefinitely via GPS with a trusted family member or friend while traveling. Apple and Gmail make this simple to do but there are also apps for this.” 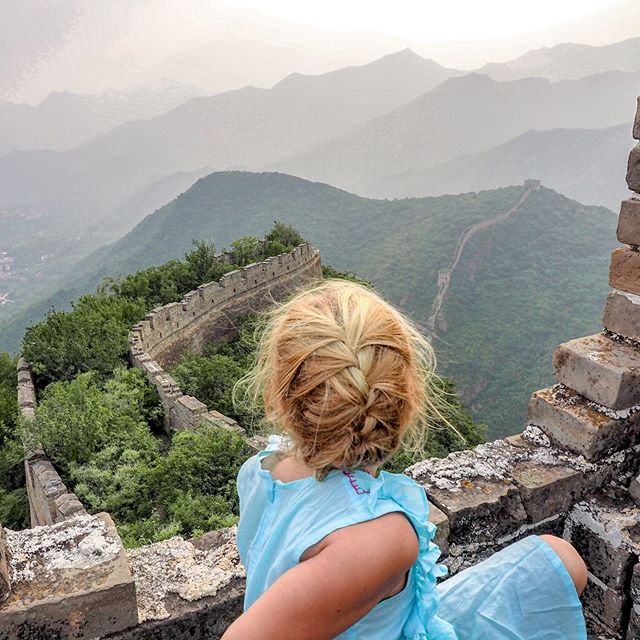 Farrell's daughter overlooks the Great Wall of China on a recent trip. Photo via @mumpacktravel.

4. Give Yourself Some Extra Leeway

“Everything just takes slightly longer,” Aktar flatly states. Farrell also mentions this, laughing that “it would be nice to have someone else to carry the bags.” And it’s true that whether it’s only having two arms to carry all the bags from the taxi to the check-in counter or struggling to read a map without a second opinion, traveling as a solo parent can just make everything take a little bit of extra time. So be sure to relieve some of the stress and anxiety that comes with travel by building in plenty of time to your schedule.

This goes for the length of the actual vacation too. Farrell also notes that having plenty of time to just sit and relax while on your trip is key. “We’re currently in the Philippines, and we have a full week here,” she says. “Because of that, I’m just sitting here looking out over the palm trees to the water, beach, and boats. It’s really peaceful.” 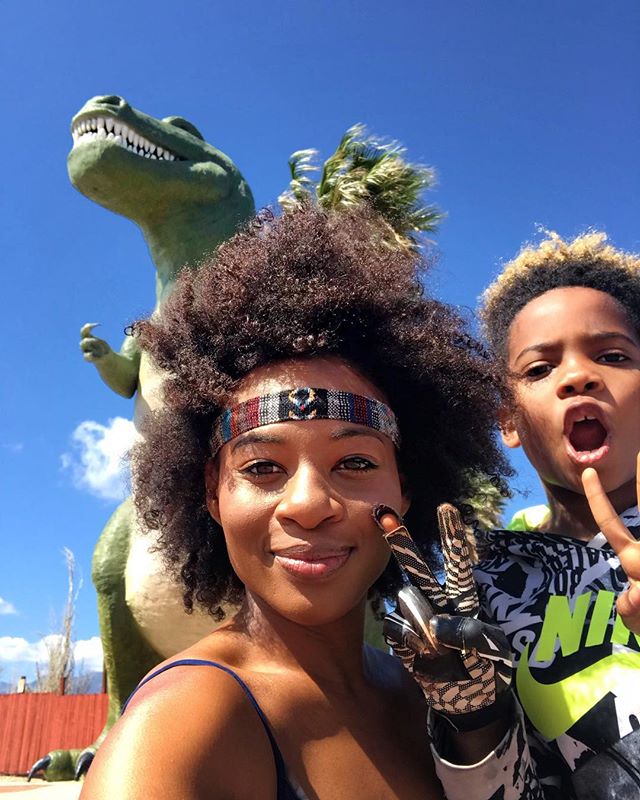 “One of the upsides of solo parenting is that you’re the sole decision maker. You don’t have to worry about what another adult wants to do and negotiating that. Emmie and I just work together and decide. So we’re a little team,” explains Farrell.

All three women also discussed how lucky they feel to have such quality one-on-one time with their children. “I love being able to get to know my child on a different level because we are together all day. We talk a lot and I better understand his educational needs, interests, and who he is becoming on his own,” says Smith.

“One of the upsides of solo parenting is that you’re the sole decision maker.”

The bonding didn’t end when the trip was over for Aktar. “We still talk about it all the time and look at the pictures together,” she notes.

“The best part of traveling as a solo parent with Emmie is I get to spend time with her, which I don’t get enough of when we aren’t traveling and are at home,” agrees Farrell. “We get to spend everyday together, learning about each other and exploring the world. Sure, it’s not always roses, but most of the time it is. For us it’s just important to spend time together and explore. I can’t think of anything better.”

Hannah Freedman is the Senior Editor for Family Traveller, a publication dedicated to offering advice and inspiration for incredible family trips. She has also written for Vanity Fair, Travel + Leisure, Thrillist and Roads & Kingdoms, among others.