Despite having asked three times, the carafe of water I long for has yet to appear. My guess is it’s because the bill’s been paid and I’ve been sitting in the same spot—a highly coveted one, at that—for nearly two hours now. With a notebook and pen to my left, the remnants of a café crème to my right and a brass plaque that reads S. de Beauvoir on the wall behind me, I am probably just another cliché to Monsieur French Waiter.

Surely he’s used to it.The famed all-day cafe on Boulevard Saint-Germain remains atop many tourists’ lists since it was a favorite amongst artists and intellectuals of a bygone era, such as the aforementioned French feminist, writer, and philosopher. She sat on the banquette side of this very mahogany table, next to these very floor-to-ceiling windows framed by these very green velvet curtains. Despite only recently educating myself on S. de Beauvoir—here, we’ll refer to her as Simone—I already like her style. I would’ve chosen this seat, too—that is, if I were living in Paris circa late 1940’s.

But I’m not. I’m living in Paris circa now, which is why I, myself a feminist, writer (but by no means a philosopher) generally situate myself over on Rive Droite, on the right bank of the Seine and the area where much of the city’s creative class live, work, and play. In fact, if Simone were a rising literary sensation living in the City of Light today, I think she’d do the same. The born-and-bred Parisian even hinted at her desire to embrace “exotic” Belleville—Paris’s de facto artsy, cool hood—in her first autobiography, Memoirs of a Dutiful Daughter, published in 1958.

Of course, she’s more well-known for penning The Second Sex (1949), a groundbreaking treatise about womanhood that celebrates its 70th anniversary this year. I picked up the 832-page-tome with the intention of tackling it, but got about a quarter of the way through before deciding I might connect more with her first-person musings. Indeed, I quickly discovered the voice of a headstrong dreamer who was determined to make it big: “I was convinced,” she wrote in Memoirs, “that I would be, that I was already one in a million.”

Her confidence boosted my own as I traipsed around the Left Bank following in her footsteps, and as I swooped back over to my side of town to visit like-minded venues where I imagined she and her entourage (and, in turn, you and yours) might frequent today.

The “Then” Café: Les Deux Magots

While I see the appeal in such an institution, despite a recent refurbishment on the decor, it’s dated in spirit. To wit, I’m told only women are hired to carry the pastries tray to maintain the tradition of giving those at the table something sweet to look at when they bend over—if you catch my drift. Thankfully, the lady who presented my creamy, coffee-flavored choux wore a black crewneck, keeping the focus on the Pierre Hermé confections she touted. But I can only imagine what Simone would think, having written: “Men and women had a right to be considered equal as human beings, and have exactly reciprocal benefits and privileges.”

Like Les Deux Magots and its famous neighbor Café de Flore, this establishment north of Canal Saint-Martin and just south of Belleville, has all the iconic Parisian café elements locals and visitors alike desire: menu written on a mirror, side-by-side rattan terrace chairs and an all-day convivial vibe that stretches from 8 a.m. eggs and coffee, to 5 p.m. cheeseboards and wine. The difference? Fewer tourists, quality coffee roasted locally and superb natural wines selected discerningly. In fact, they even have live jazz on Saturday afternoons. On a recent visit, after knocking over a glass bowl with my coat due to the squished set-up on the heated terrace, I sat for hours reading without nary an eye-roll and an oft-refilled carafe of water. 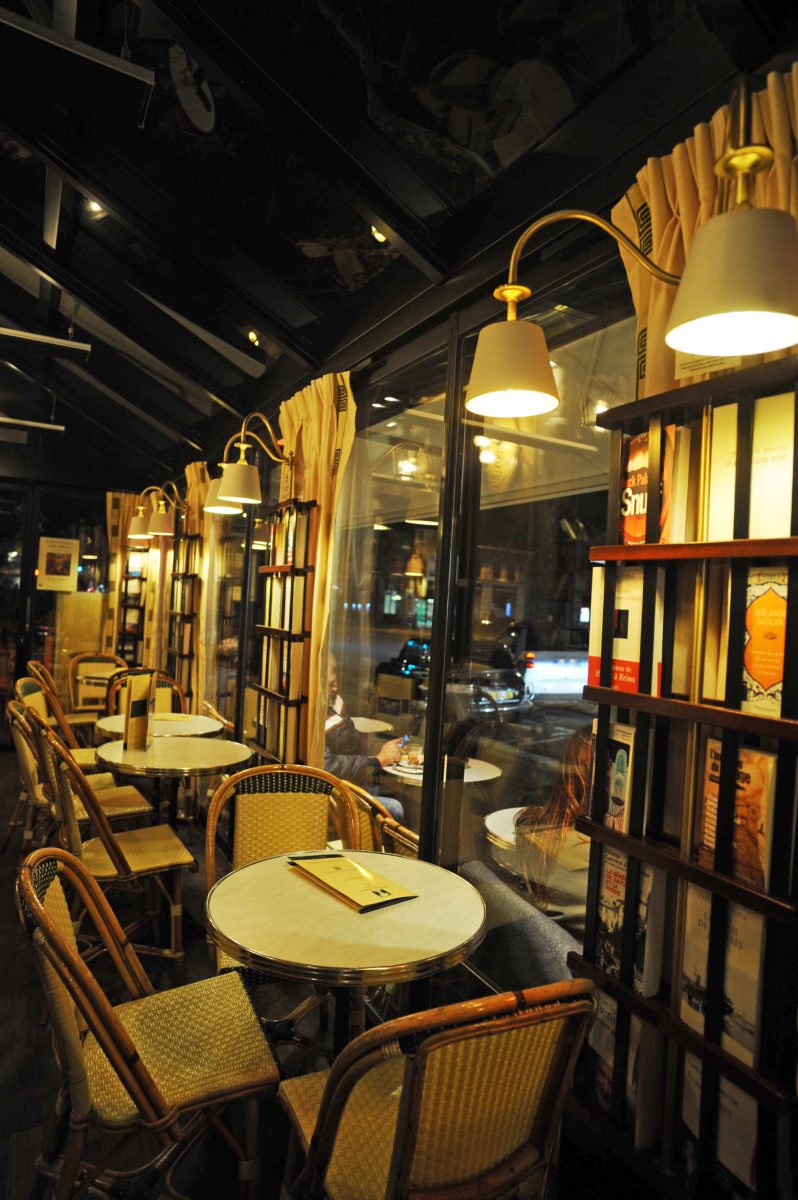 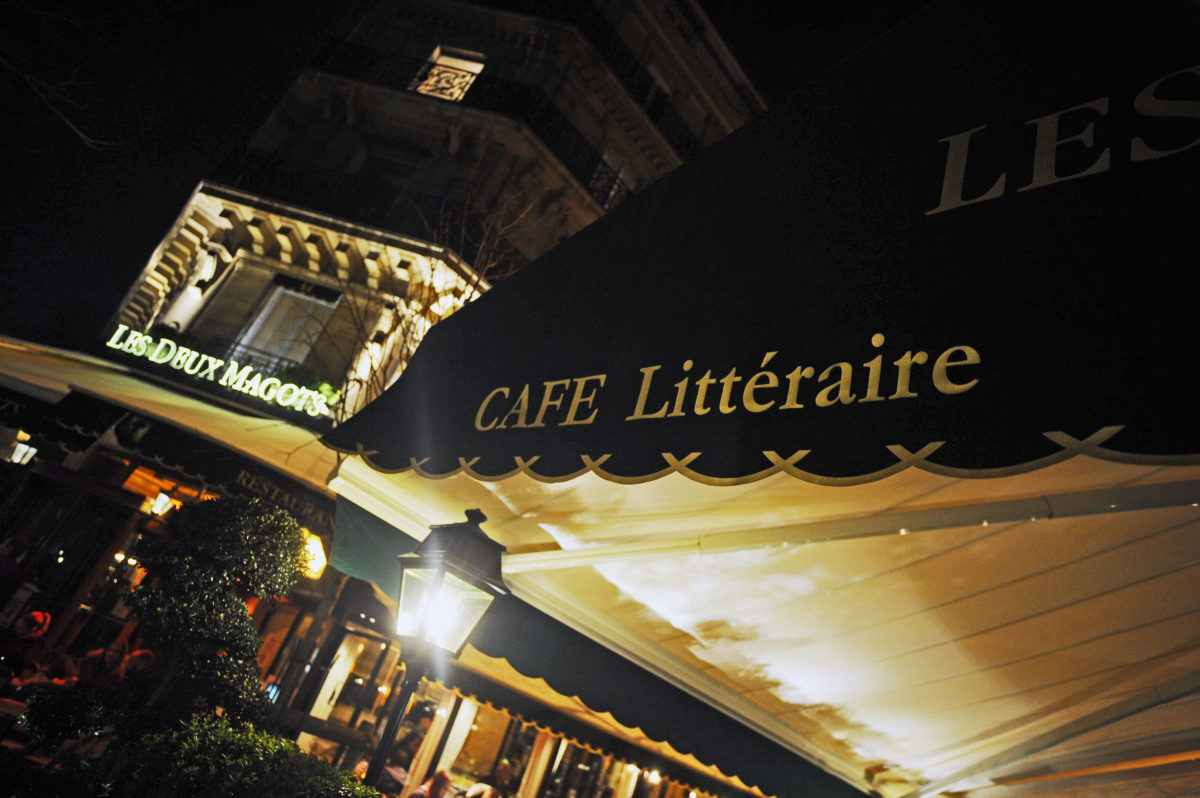 The “Then” Hotel: Hotel La Louisiane

Located on a small street full of art galleries, the hotel on rue de Seine where Simone lived between 1943 and 1948 is still in operation despite its rather stale state. I nearly walked right by it at first, and once inside discovered a lobby with little but a stained IKEA sectional, a small check-in desk and dusty plants in need of water. But, quelle surprise, the stone-walled, wooden-beamed place was booked solid so I wasn’t able to visit Simone’s top-floor room that overlooks rooftops and a sliver of the Seine, where she “planned to stay until the end of days.”

While this boutique hotel that opened in October is not on a popular (or populated) street, its location is prime boho territory and like La Louisiane it’s a bare-boned homestay with a tiny counter for check-in and communal areas for guests-only. The difference is that the decor is heaps more inspiring. Natural elements abound, from long wooden tables and marble countertops to dried flowers in glass bottles and bamboo chairs for reading any of the vintage books sprinkled around. (I didn’t see any Beauvoir, but that would’ve been too twee, n’est pas?) 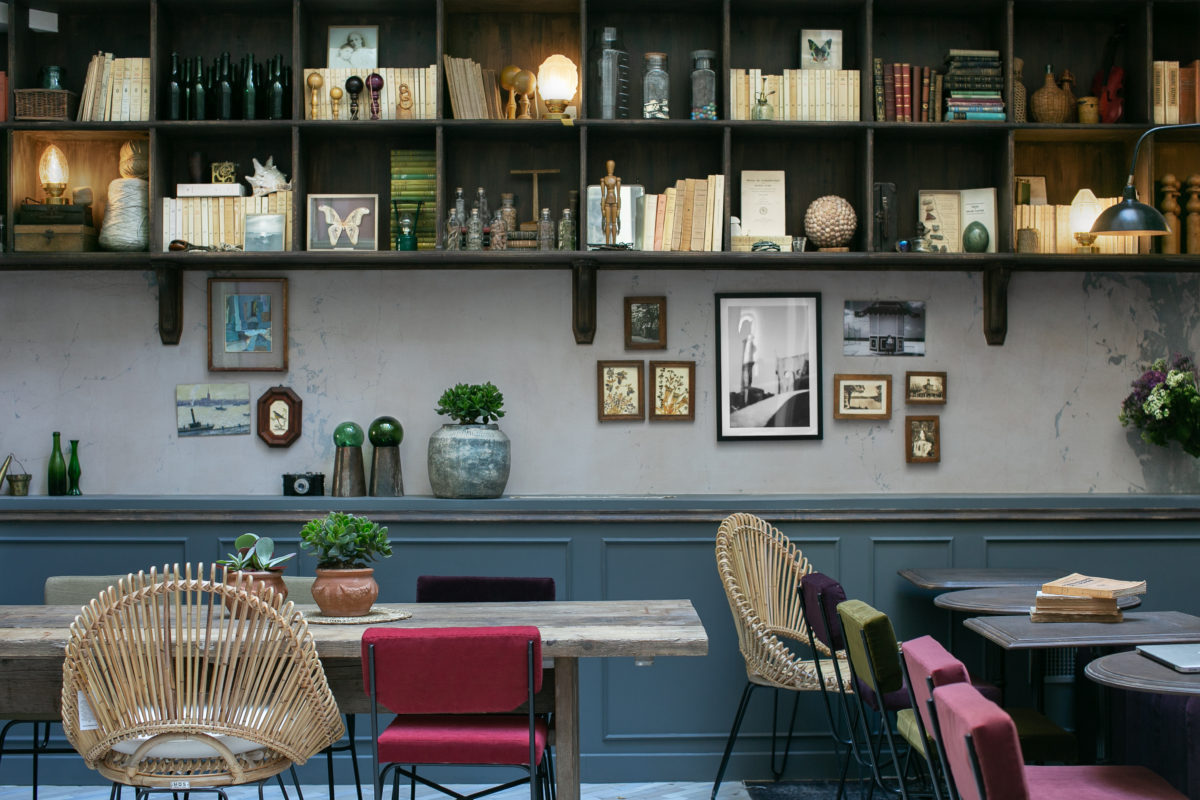 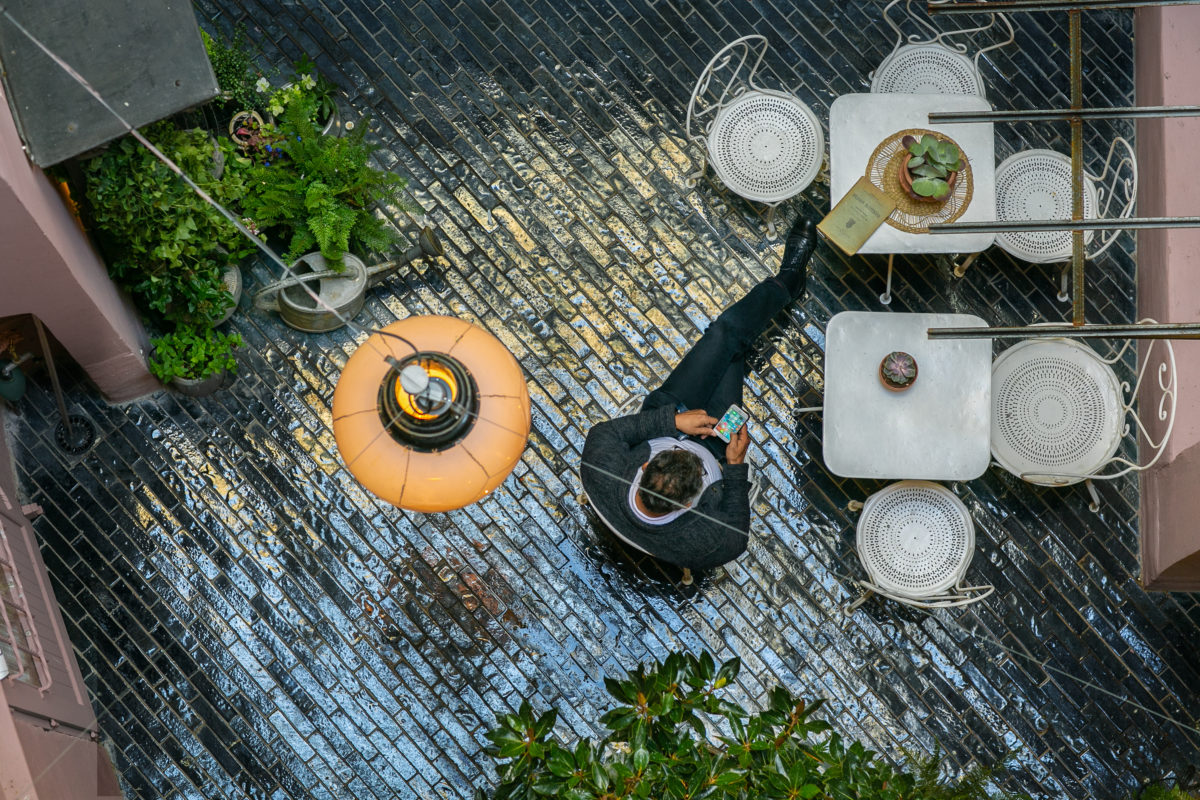 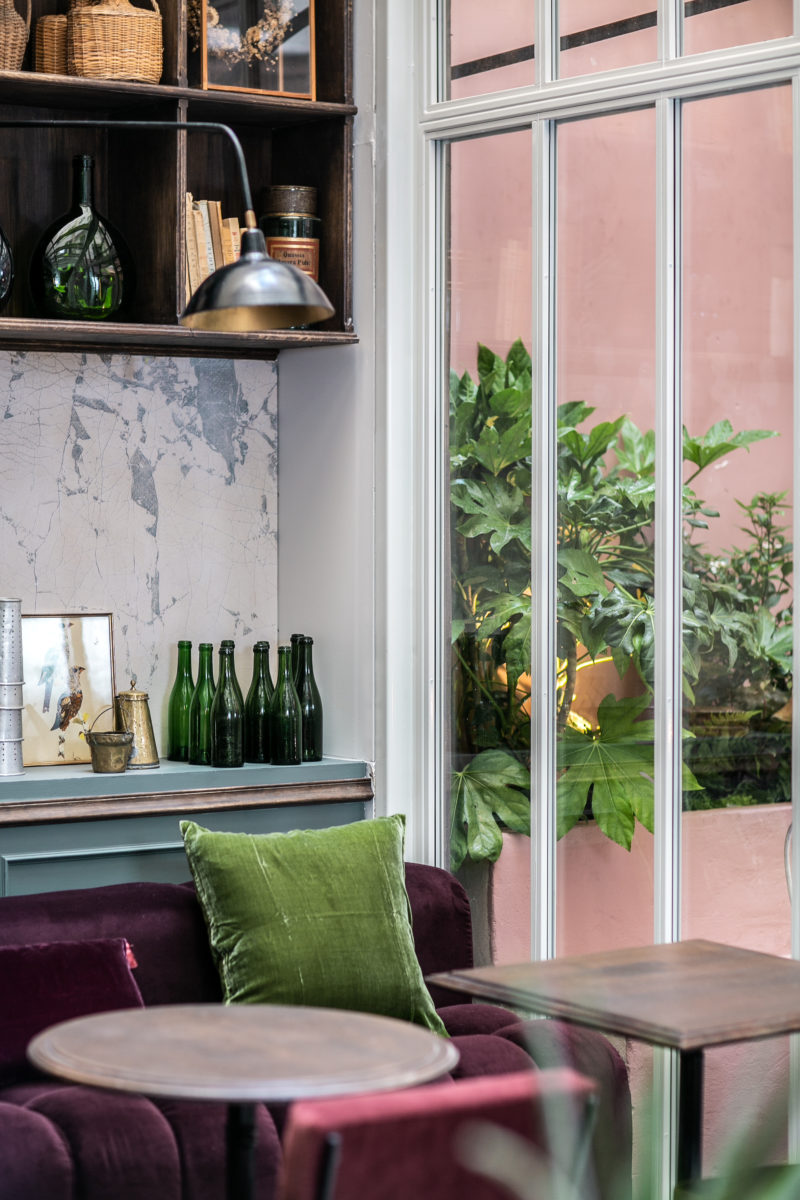 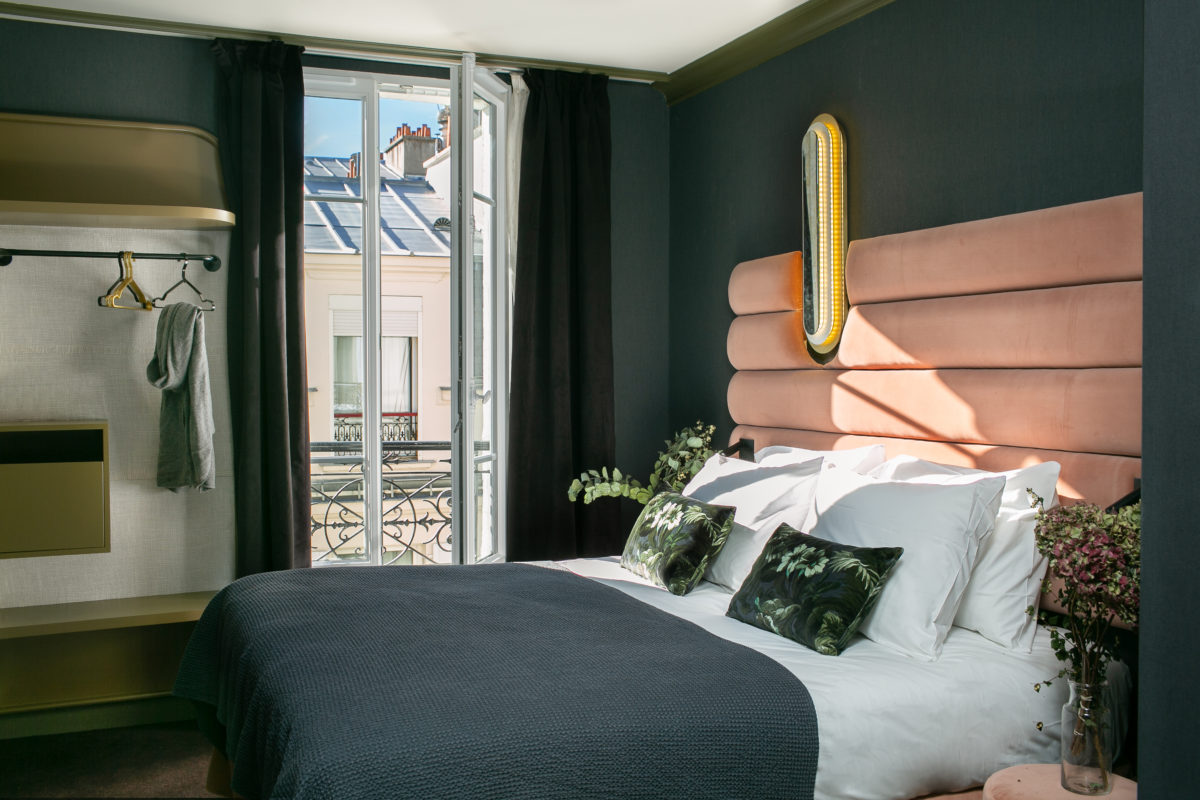 The “Then” Club: Le Tabou

Late night, Simone enjoyed a good gin fizz at clubs like Le Tabou in the basement of the Hotel d’Aubusson on rue Dauphine. Unfortunately, this underground hotspot once clouded by cigarette smoke and the jazzy tunes of Miles Davis, closed in the late ‘90s and will soon become Hotel d’Aubusson’s spa. Contrary to its days as a dungeon-esque disco, the address now boasts a stunning facade dripping with ivy and automatic doors that caught me off-guard upon approach. Inside, the intoxicating scent of hot chocolate hit me immediately at its Café Laurent, which hosts musicians most evenings.

The last time I went clubbing may have been when New York City’s Limelight was still a dancehall in an old church as opposed to a mini-mall in an old church, so I was pretty petrified to first leave my house at 10 p.m. for a night of boozing and grooving. I recruited my youngest, most energetic friend to join me at the park location of Rosa Bonheur’s weekly female DJ night and surprisingly found myself disappointed when I learned they close at midnight on Thursdays. But it was a joyful 90 minutes, complete with a mixed crowd who took pleasure in each other—and the stripper pole in the center of the dance floor. No telling if Simone, whose lifelong relationship with Jean-Paul Sartre was peppered with freewheeling flings, would’ve given it a try, but surely she would’ve taken pleasure in watching. 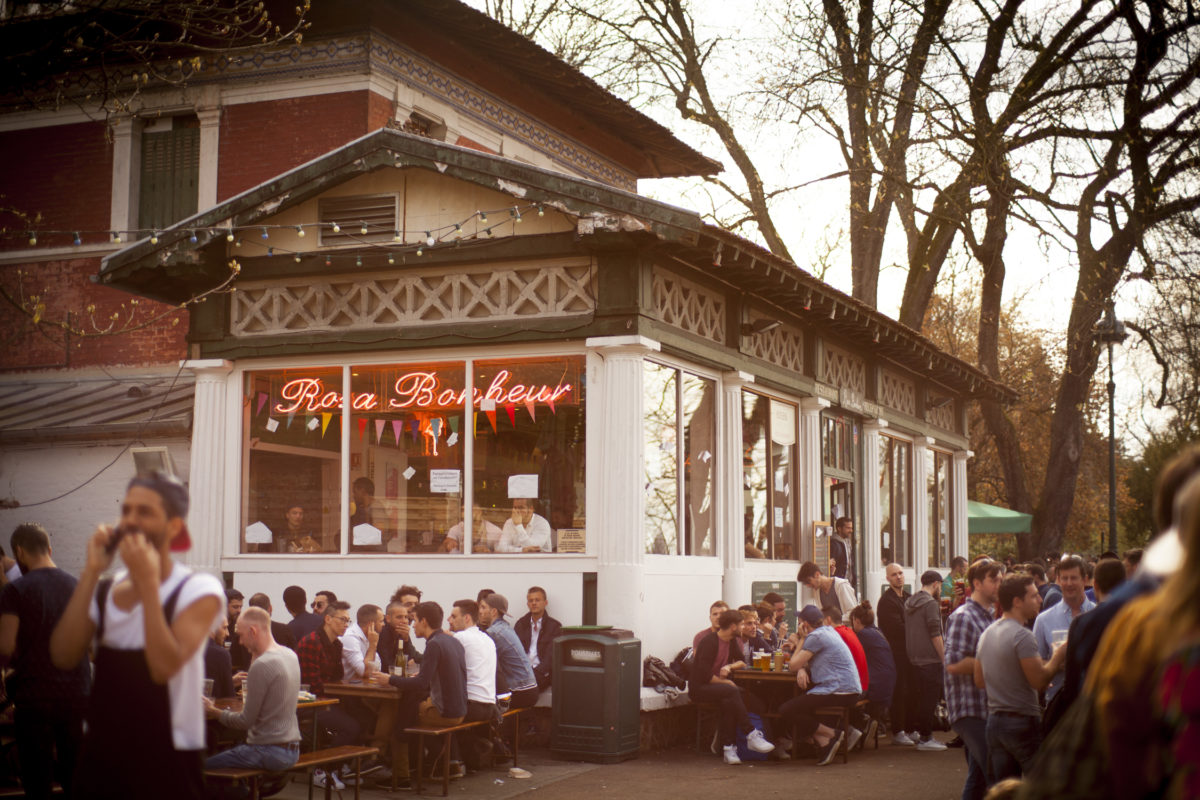 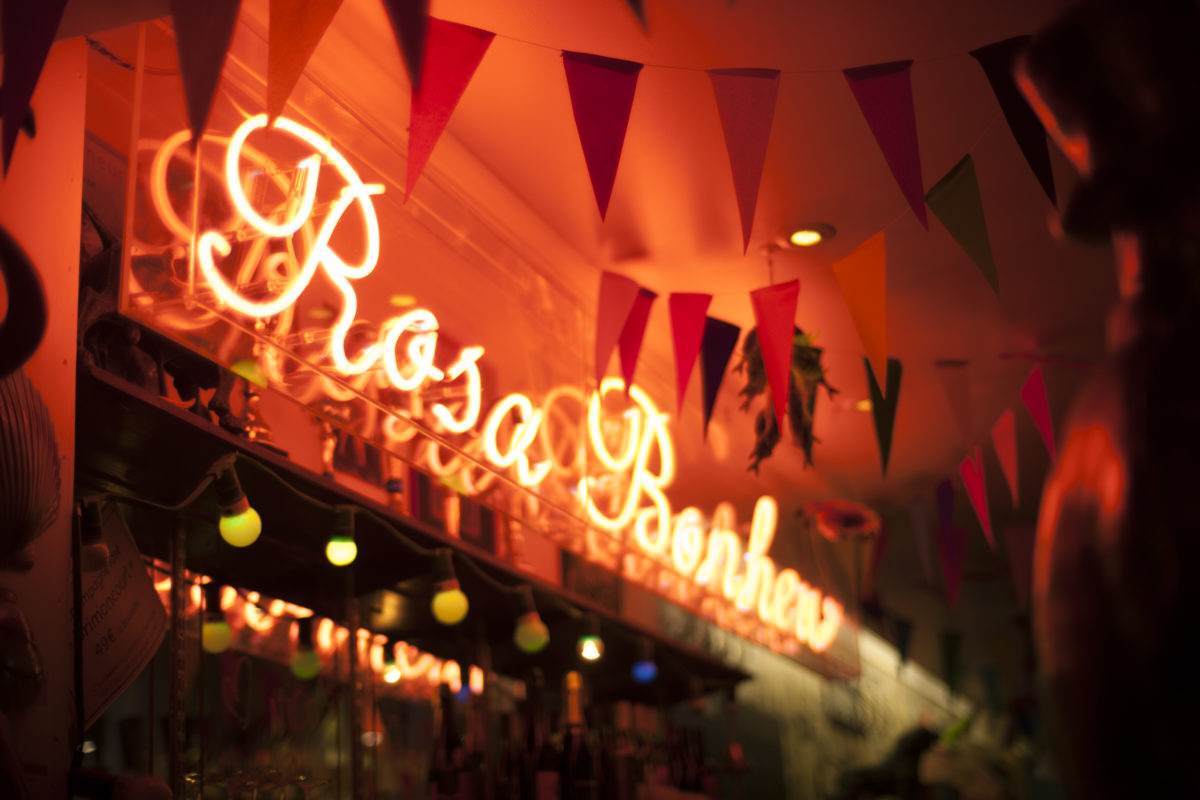 The “Then” Park: Jardin du Luxembourg

Simone liked to sit by the Medici Fountain in the English Gardens, located in the park’s northeast corner. And, despite a strong presence of gnats hovering over the water on the day I visited, I could see why. It’s a quiet, solitary section of an otherwise very bustling park. There’s the children’s carousel with its brass rings; the large pond where kids chase sailboats; the cigarette-smoking teenagers perched on the park’s classic green chairs; the elders playing pétanque at 2 p.m. on a Tuesday complete with civilized racks to hang their coats. There’s even an apiary for beekeepers. It’s a park for everyone, at any age, at any season, at any hour.

Measuring about the same size as Luxembourg, this hilly esplanade in the 19th arrondissement is actually where I had my first picnic the summer I decided to move here four years ago. I recall walking into it as Alice might have Wonderland: completely awestruck. It felt like the place to be on a hot summer day with scores of Parisians exploring its caves, waterfalls, bridges and viewpoints that overlook the whole of Paris. On occasion, Simone crossed the river to “stride purposefully” through this landscape, which, she wrote, “smelt of damp and greenery.” I’ve not doubt that if she were a Right Banker today, she would’ve strolled more regularly in its wild refuge. 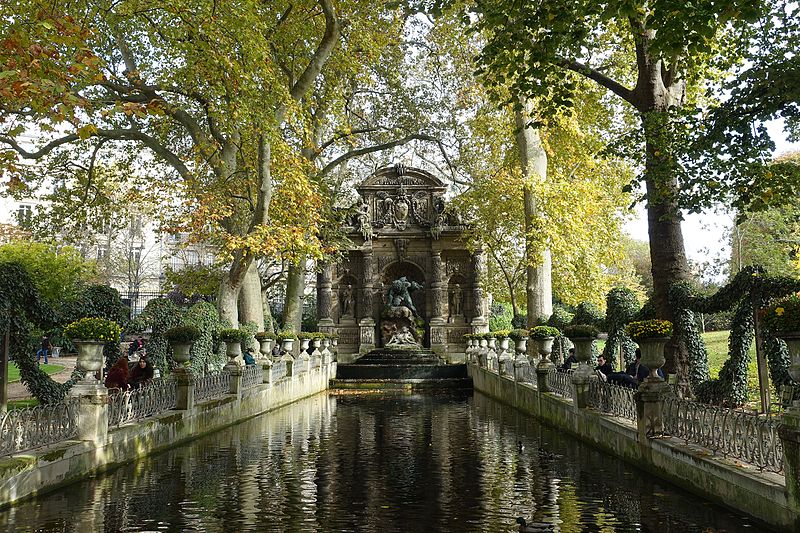 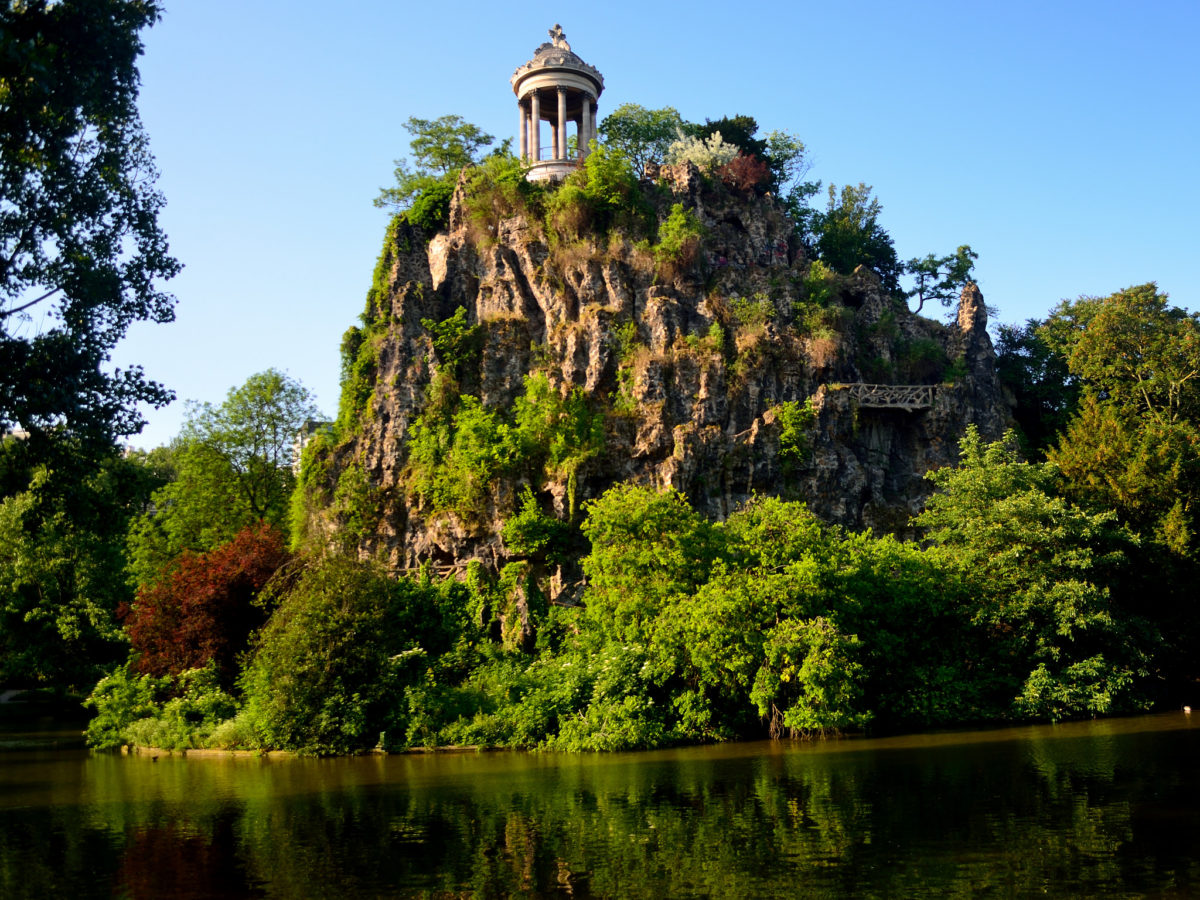