Cheryl Day, cookbook author and owner of Back in the Day Bakery, shows off one of her cake creations. Photo by Angie Mosier.
IndexCaroline Eubanks

Savannah, Georgia is known as the Hostess City for its southern hospitality, but it’s the women of this coastal locale that made it what it is today. When cities all over the country were bulldozing historic buildings in the name of progress, the women of Savannah founded the Historic Savannah Foundation to keep the city’s treasured landmarks intact. This legacy continues today with the women-owned businesses found throughout Savannah’s charming neighborhoods. 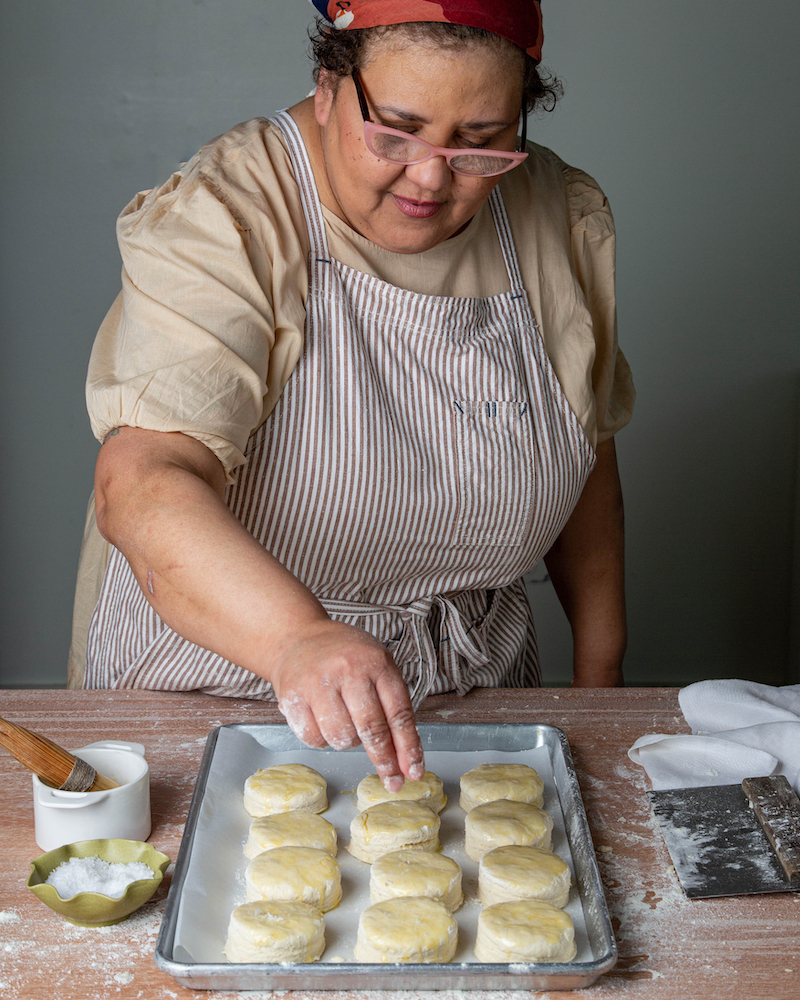 Back in the Day Bakery

Cheryl Day has gained acclaim from the James Beard Foundation for her cookbooks, including The Back in the Day Bakery Cookbook and Cheryl Day’s Treasury of Southern Baking. But her Starland area bakery, Back in the Day Bakery, has a reputation of its own. The pastel-hued storefront opened in 2002 and sells a rotating selection of baked goods, including flaky buttermilk biscuits, muffins, and cookies. The shop also sells pies and cakes for the holidays.

The hours are limited to weekends during the pandemic, but Day has offered virtual baking classes and online sales of provisions like jam and biscuit mixes. Cookies and cupcakes are also available nationwide on Goldbelly.

In 2016, Kay Heritage started a mobile pizza business with her daughter at a time when food trucks were nearly non-existent in Savannah. But in 2019, seeing a gap in the market, she was inspired to open Big Bon Bodega, a brick-and-mortar bagel shop in a converted garage in the Starland District.

It’s inspired by the Korean corner stores of her youth, but instead of knickknacks, diners will find freshly-baked Montreal-style bagels with toppings like kimchi and lemon caper spreads. The bagels are sold for breakfast and lunch but at night, the menu turns to pizza.

But BBB also serves the community. “Our core purpose and value is not about making bagels and pizza but really using our business to share the knowledge of what not to do, to raise up more effective business leaders for the community,” says Heritage. 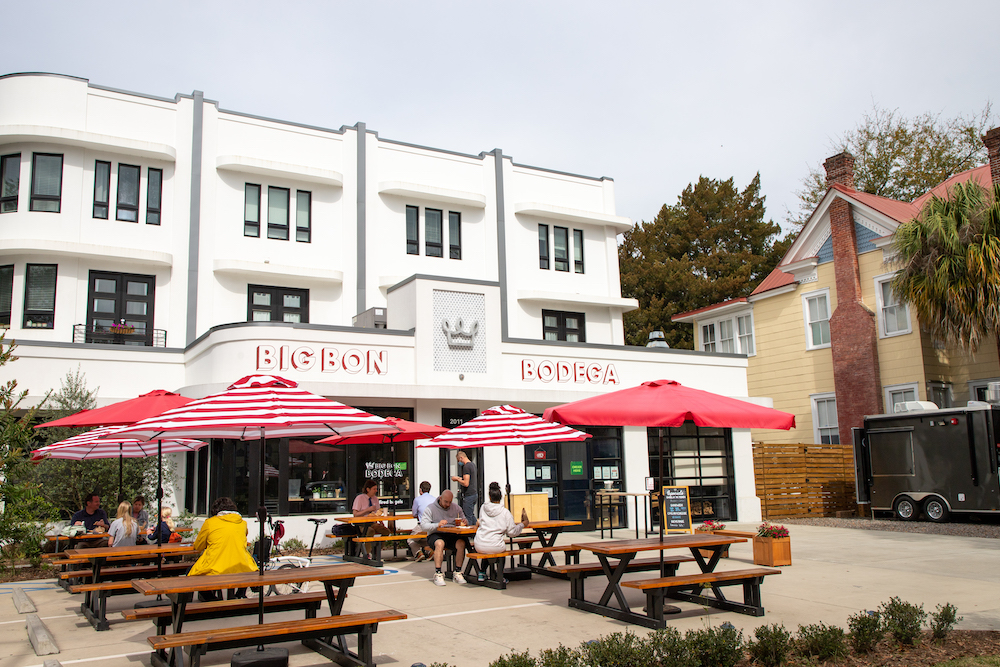 Big Bon Bodega is one of the most popular eateries in the Starland District. Photo courtesy of Visit Savannah. 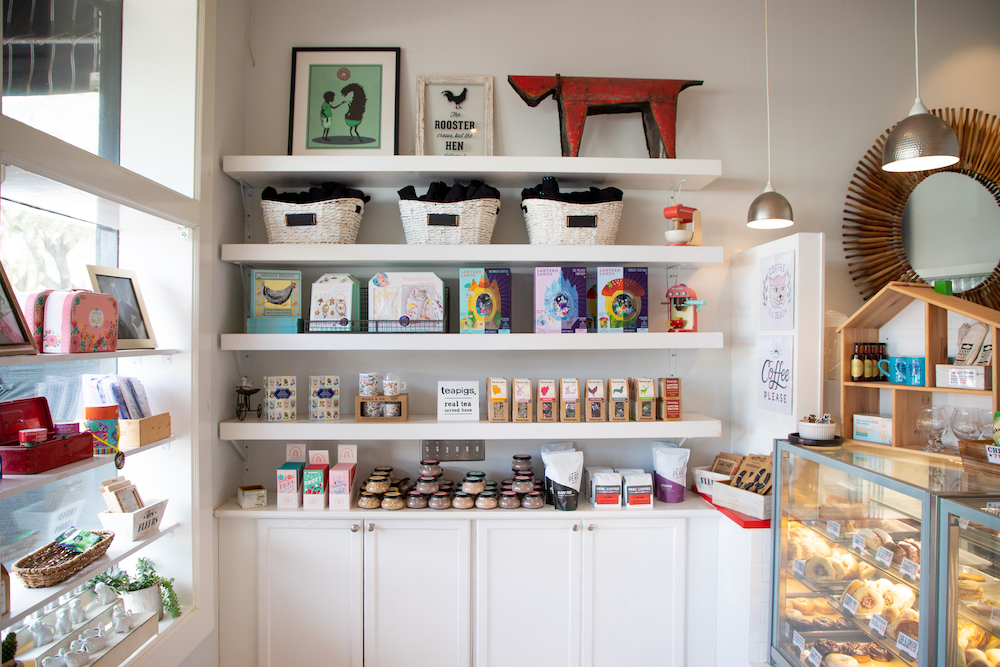 At Henny Penny, adults and children will have fun in equal measure with daily arts and crafts programming. Photo courtesy of Visit Savannah.

In 1978, Anna Raskin opened The Book Lady Bookstore in the lower level of a historic home near Chippewa Square. It was stocked with new, gently used, rare, and even out-of-print titles from writers from Georgia and beyond.

Joni Saxon-Giusti, who worked with Raskin for many years, is now at the helm of the independent shop. She continues to support authors and the city’s literary legacy with readings and discussions, and still hand-selects the titles that grace the shelves of the cozy store.

Owner Jennifer Jenkins was looking for a kitchen for her bakery operations at her cafes, Foxy Loxy Print Gallery & Cafe and The Coffee Fox, when a “unicorn” space popped up a few blocks away. The demand at the sister spots was growing and the bakers had to work at night after the cafes closed.

Now that she’d found a kitchen for the baking side, she wanted this space to be different from the rest. A parent of a young child, Jenkins had conversations with friends about where to take the kids that the adults could also enjoy.

Thus Henny Penny Art Space & Cafe was born. There’s daily programming in collaboration with Scribble Art Studio, an arts studio with projects for all ages, as well as a counter with coffee, paninis, and pastries and a retail section. 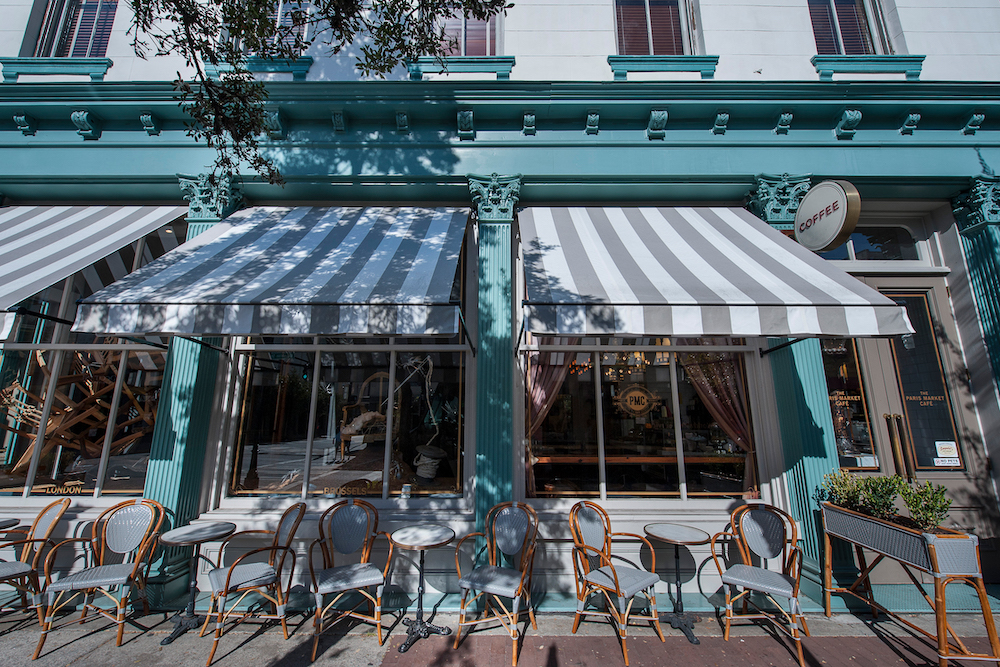 The cafe tables at The Paris Market are a popular hangout, instantly transporting you to the street-side bistros of Paris. Photo by Casey Jones. 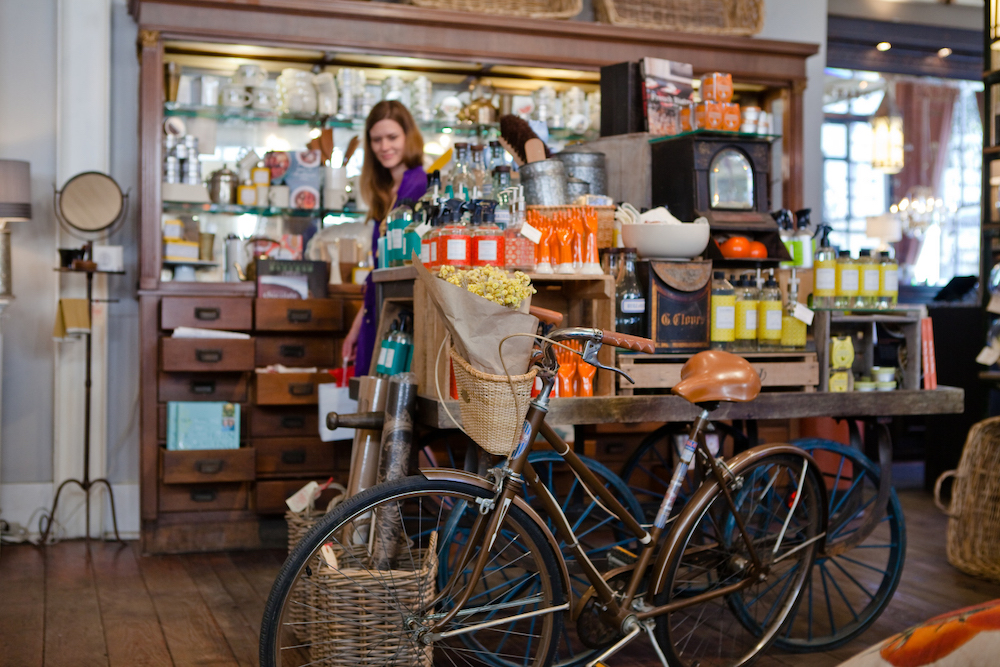 An eclectic selection of products at The Paris Market. Photo by Ralph Daniel Photography.

Inspired by the stylish markets of the City of Light, The Paris Market was opened in 2001 by Paula Danyluk. The sprawling European-inspired home decor and gift shop is in a 1874 Victorian building on Broughton Street that previously operated as a grocery store. But it had been left to crumble, so Danyluk had to bring her vision to life.

Today it has a cafe with coffee and pastries as well as outdoor tables like you might find in the French capital. The store’s antique furniture holds all sorts of items, from French soaps to luxury linens, cookbooks, and jewelry, each item carefully selected by Danyluk. She now has a second location in Bluffton, South Carolina. 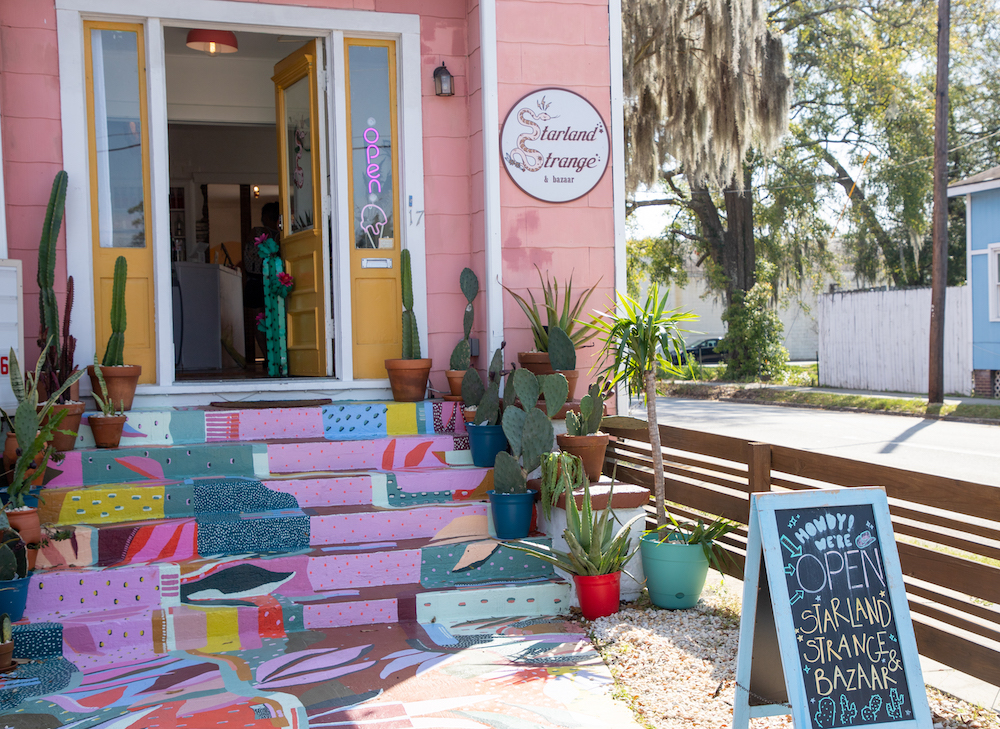 Starland Strange and Bazaar’s colorful stairs introduce shoppers to the store’s whimsy, giving a taste of what's inside. Photo courtesy of Visit Savannah. 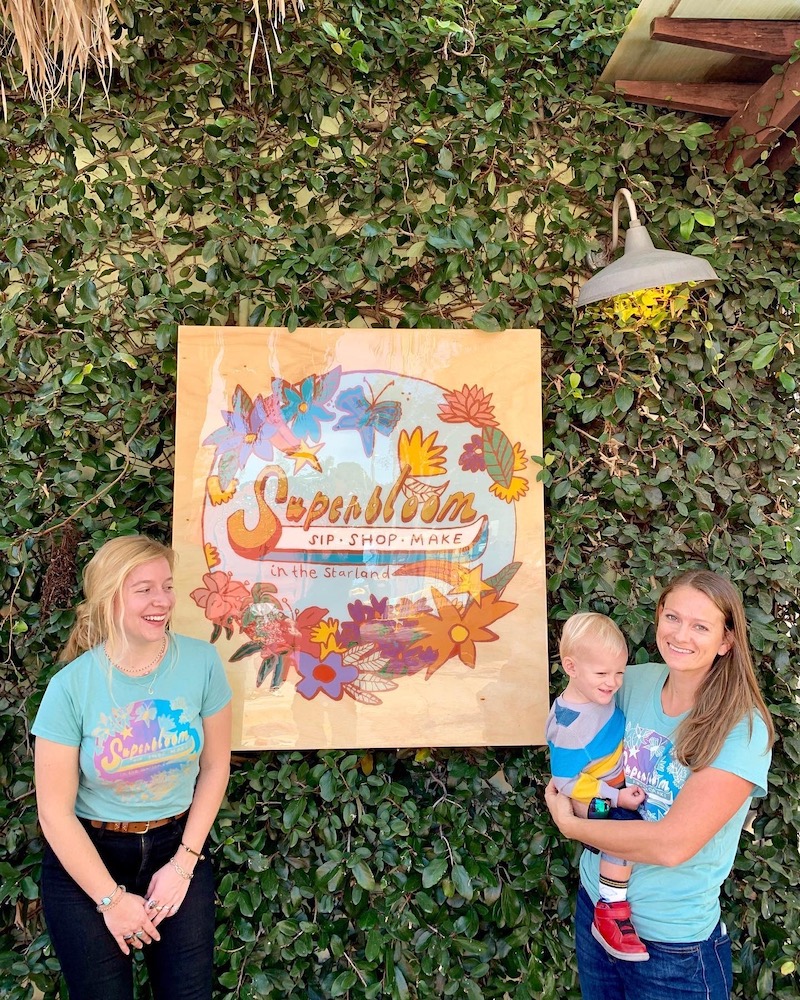 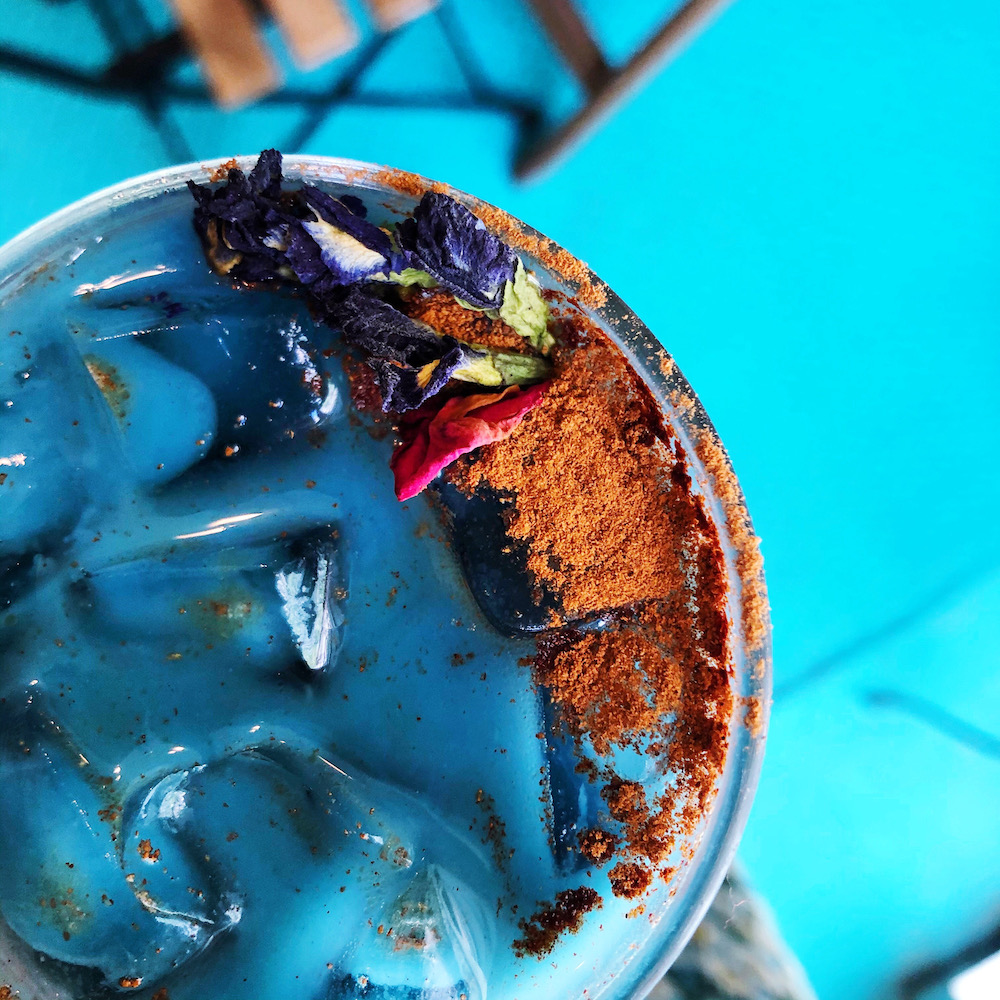 Lavender lattes are a thing of the past. Don't miss out on Superbloom's colorful superfood coffee drinks. Photo courtesy of Superbloom.

Marguerite Seckman and Emily Bargeron are the owners of Starland Strange and Bazaar, a quirky clothing and gift shop in the Starland District. Its products sum up the fun energy of the neighborhood.

Here you can snap photos of the brightly painted stairs or browse for gifts like funky stickers of Saint Dolly Parton, clothing, and jewelry. There’s even an ice cream counter to cool off from the hot Savannah afternoons and the store’s own line of sprinkles.

Marguerite Seckman also opened another Starland business with Lara Neece in 2016 with Forest and Fin, a local screen printing studio. Over the years, they added items from other local artists, which became the current Superbloom store.

The artist space has both classes and works from over 30 makers, along with drinks like colorful superfood lattes, kombucha, and organic wines. Here you can find the best souvenirs and gifts, including mugs, T-shirts, prints, and cards. They also co-host the Desoto Street Market with a neighboring brewery, which brings together local small business owners.