The Local’s Guide to Seoul, According to a K-Pop Reporter

A K-pop reporter from the Korea Herald shares the best things to do in Seoul for K-pop and non-K-pop lovers alike.

Sungmi Ahn is a reporter at The Korea Herald, the country’s largest English daily newspaper. After covering various beats including Seoul’s budding startup scene, auto industry, plus the film, theater, and books culture, she now covers one of the most coveted topics in South Korea and the world: K-pop. Yes, this means she gets to follow around BTS, the swoon-y, seven-member boy band with over 21 million Instagram followers.

Ahn has lived in Seoul for the past seven years and currently lives in Central Seoul near the City Hall station: “I love this part of town. There is a lot of history here. It retains the old city charm with royal palaces from the Joseon Dynasty and traditional Korean homes known as hanok, blended with futuristic, modern high-rises.”

Though she’s  traveled and lived in many parts of the world, Ahn claims that Seoul is where she feels “a greater sense of belonging and warmth,” and espouses the, “many layers to Seoul. From the surface, it seems like another high-tech and developed city, but once you get acquainted, there are bits and pieces of color and flavor that surprise tourists and locals alike. The overcrowded metropolitan area could feel overwhelming at first, but there is definitely something for everyone.”

Especially if you’re a K-pop enthusiast. “A pilgrimage to Seoul is a must if you want to experience the culture and vibrant life that constructed and inspired your favorite stars,” says Ahn. “Once you get a taste of Seoul, you will get a better understanding of K-pop and Korean culture.”

K-pop’s popularity has boosted the number of trips to Seoul  and South Korea in recent years—according to a study by the Hyundai Institute, one in 13 visitors to South Korea said they were visiting because of their love of K-pop.

But even if you’re not a K-pop fan, “there’s always something going on in Seoul,” says Ahn, “from tasty cuisine to entertainment, cultural activities, shopping, history. It’s full of life.” 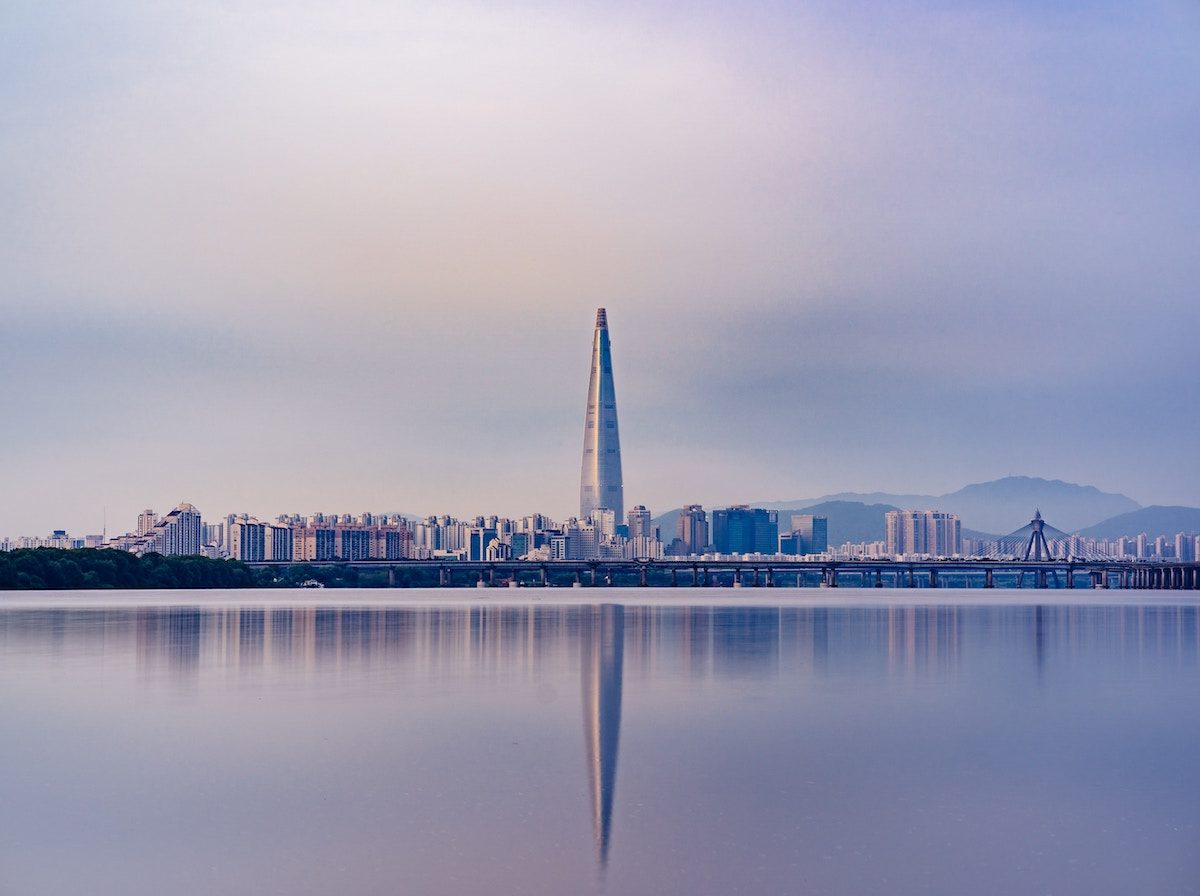 Gombal Coffee is my go-to café every morning to takeaway a warm or iced cup of latte, depending on the season. The cozy place offers two different kinds of blend: red and black. I usually choose black for its nuttier taste, over red that is fruitier and tangier. I am greeted by friendly baristas, who carefully craft my cup of coffee that makes me want to get up in the morning and get going. My other usuals in the city include Terarosa Coffee and Anthracite Coffee, that are more spacious with nice ambience, and of course great coffees.

If I am hungry and wanting to eat something hot and savory, I like to go to Egg Drop, which offers tasty egg sandwiches with different filling, including avocado, bacon and cheese, or teriyaki chicken between thick buttered brioche toasts. Nothing can go wrong with this sandwich. There are many outlets across Seoul, but try the one in Samcheong-dong, which is a serene, unique neighborhood known for its traditional Korean houses mixed with western-style restaurants and cafes, as well as galleries and shops.

Another popular breakfast stop is Isaac Toast, with more than 700 outlets in Korea, is a humble kiosk of breakfast toast with a range of meat fillings, omelette, cabbage and cheese. You can usually spot some lines in front of the shop, where they make the toast in front of you after the order. 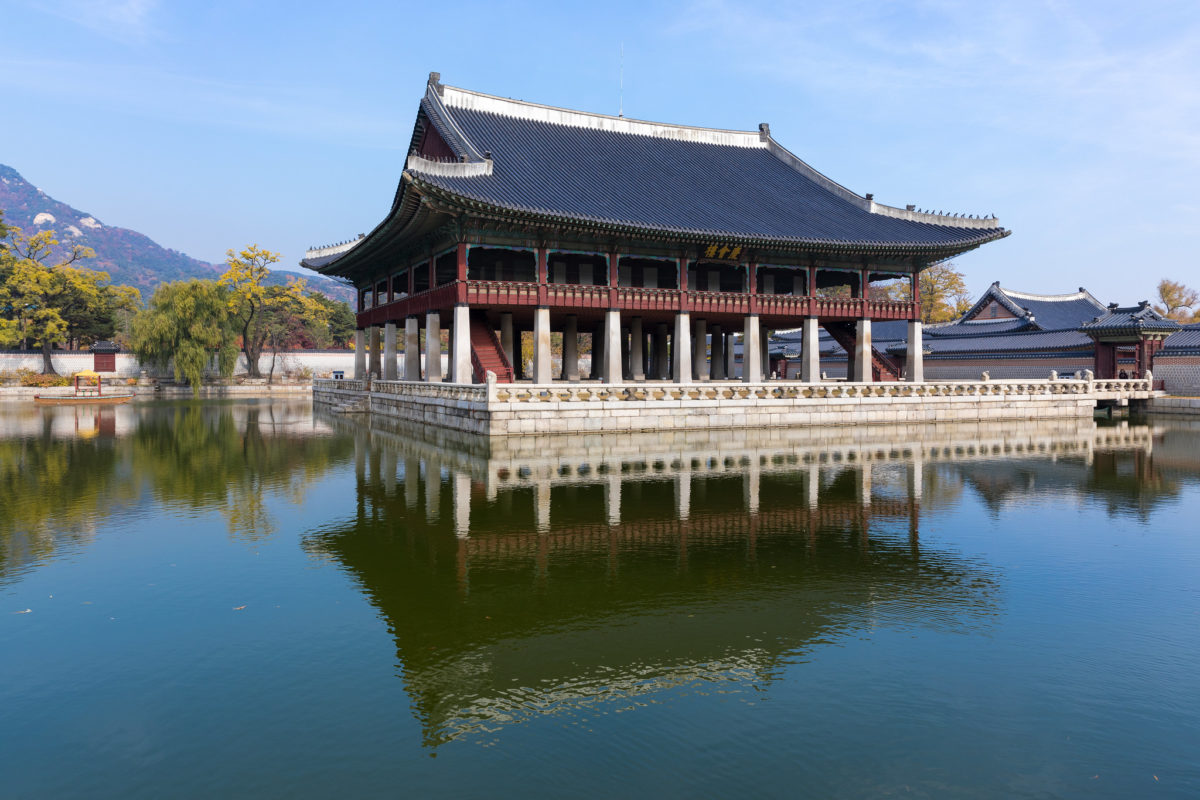 If you are in Central Seoul, visit one of the five royal palaces for a glimpse into history and the beauty of Korea that’s sustained for centuries. The biggest and the most iconic one is Gyeogbokgung Palace, where visitors can walk around the grounds and pavilions to savor traditional Korean architecture, nature, and its unique harmony. You can even rent Korean traditional clothes known as hanbok for a day and wear inside the palace and around the area. 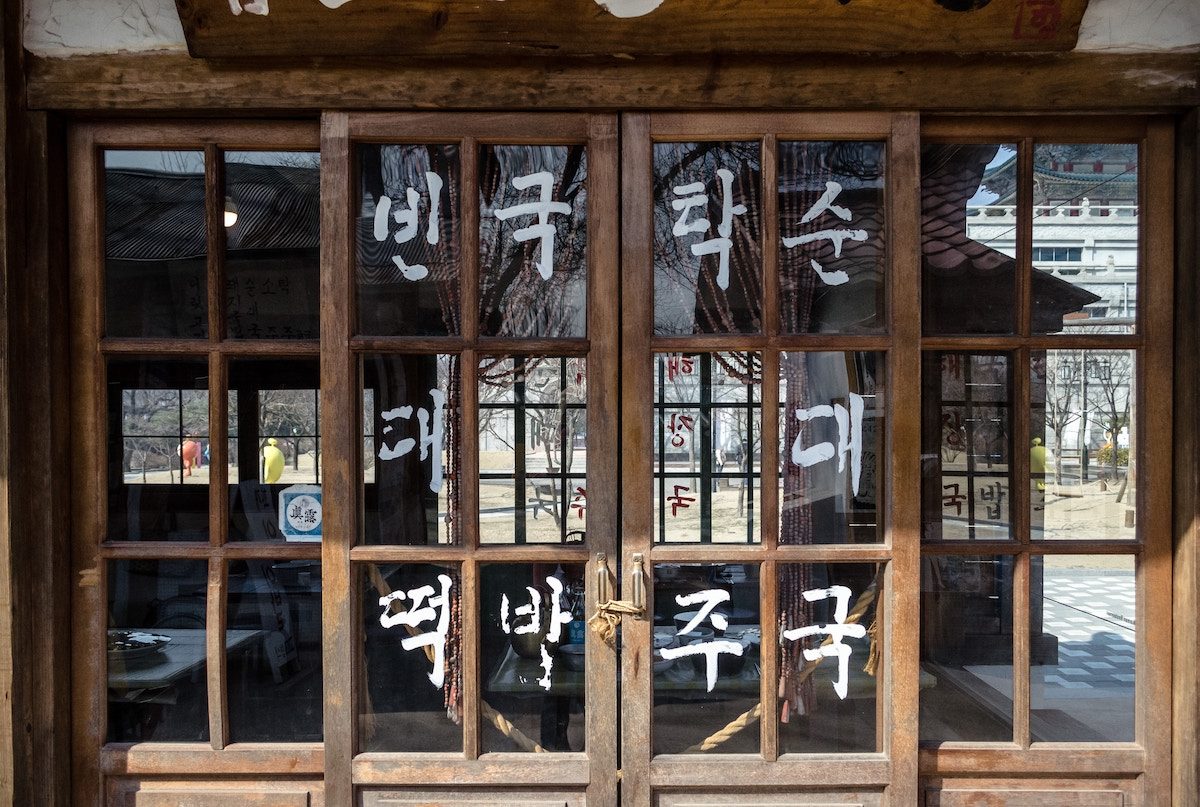 Seoul’s major museums are also nearby, including the National Palace Museum and the National Folk Museum located inside the palace, as well as National Museum of Modern and Contemporary Art to delve into the country’s thriving contemporary scene. 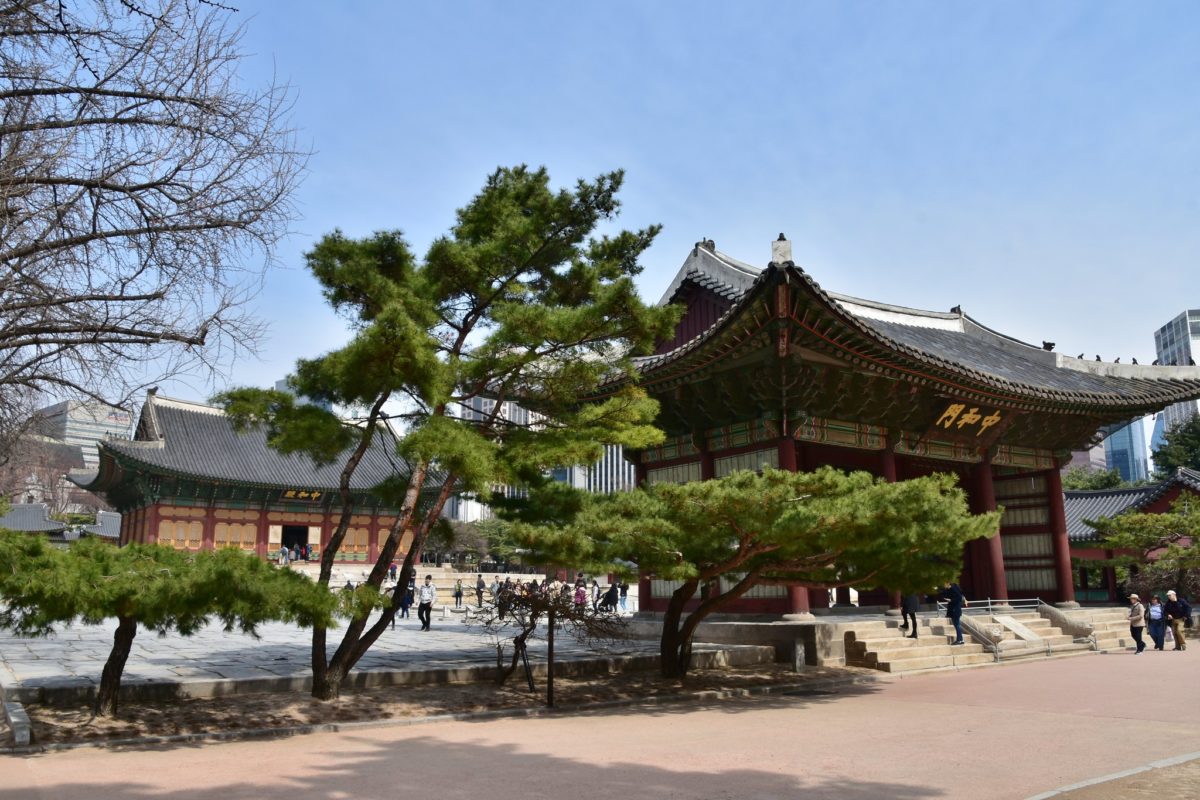 Personally I also like to visit the smaller, less-crowded Deoksugung Palace when seeking serenity inside the hustle-bustle city. The greenery and rare, spacious walled grounds give me calmness. It’s a perfect hideout to just wander around or sit on benches to read.

I like to go to Dotz in Hannam-dong, a sophisticated and hip neighborhood located just down the street from Itaewon, Seoul’s international district. This Asian-fusion eatery is perfect for lunch, with a variety of Hong Kong-style toast, Korean kimchi fried rice, Singapore-style chicken rice, and Japanese pork cutlet sandwiches. The interior is sleek and the ambience is nice. Coffee is good here as well.

If you are craving for a hearty brunch food, like eggs benedict, pancakes and French toast, Oasis is my favorite stop, which is also in Hannam-dong, and another one in ritzy Cheongdam-dong. 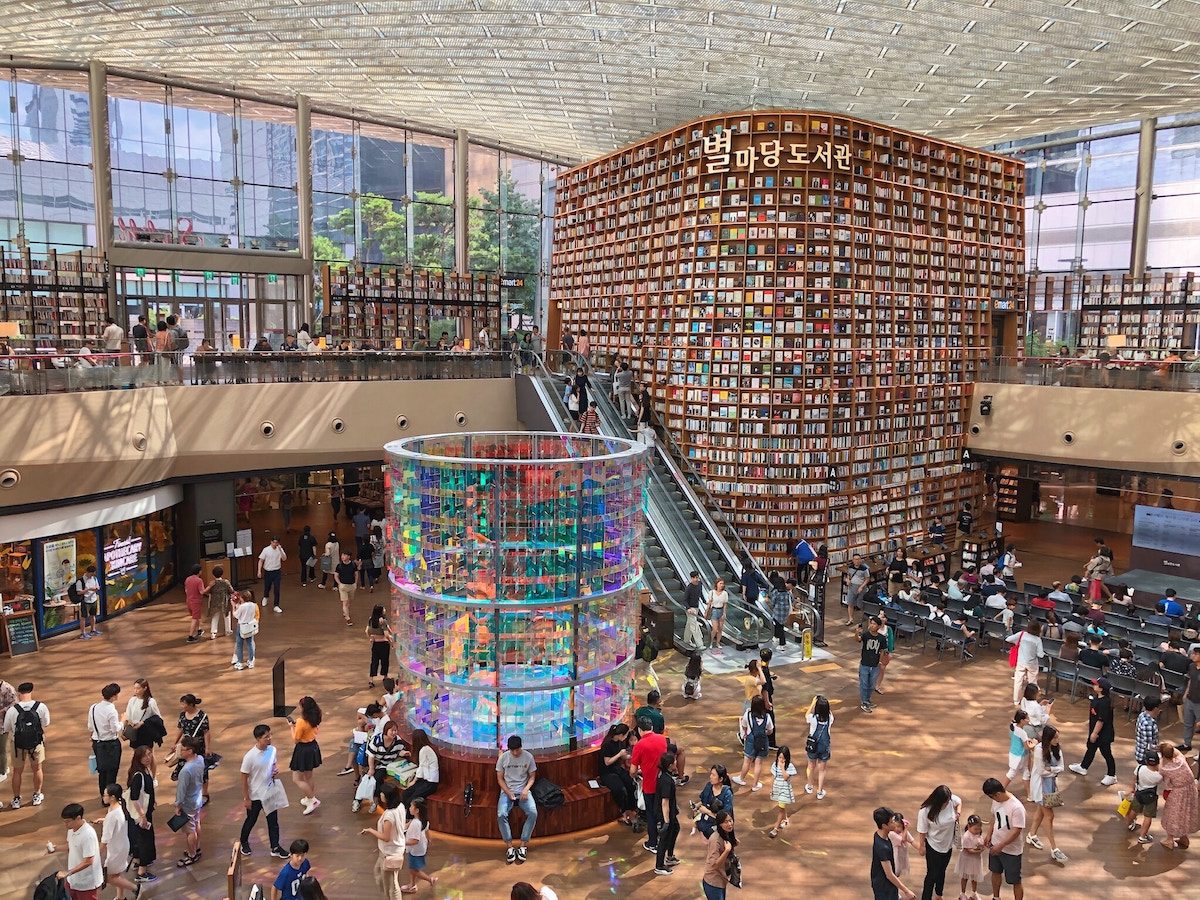 After filling up your stomach, it’s time to go on a K-pop voyage. If you are a fan of SM Entertainment stars, don’t miss out the sleek culture complex SMTOWN COEX Artium in Samseong-dong. The multi-story building features everything about SM Entertainment artists, including EXO, Super Junior, and Red Velvet. There’s a museum with archives and famous outfits worn by K-pop stars. There is also a special exhibition space, artist gallery, hologram theater, a café that sells drinks and foods named after the stars, and a gift shop where fans can stock up on merchandise of their favorite stars. (For BTS fans, there’s a special pop-up store called House of BTS located in no other than the Gangnam district until January 2020.)

If you are in Seoul’s luxurious Cheongdam area to spot the popular K-Star Road where K-pop artifacts are lined up on the road, stop by Camel Coffee for a quick cup of joe and a snack. This retro, camel-color café makes you feel like you’ve travelled back in time. Try their signature Camel Coffee and Ang Butter, a hot dessert trend in Korea which combines sweet red bean paste and butter in between a selection of bread. 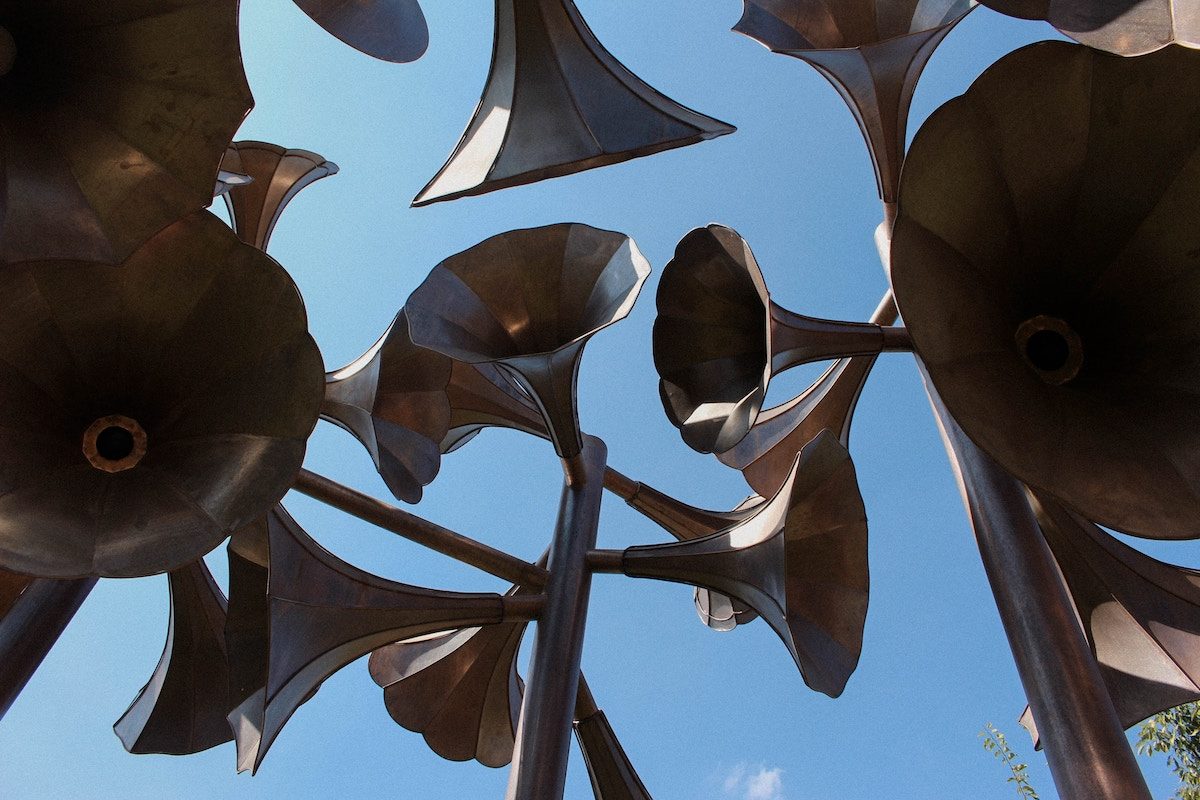 Hangang Park. It’s not so hidden, as the long Han River flows through the heart of Seoul and there are a total of 12 parks spread along the banks of this river. But it’s definitely worth a visit. If the weather allows, take a walk or bike along the river and enjoy the skyline of Seoul. The parks are also a popular spot for picnics, with people enjoying chimaek, the famous pairing of Korean-style fried chicken and beer. Yeouido Hangang Park and Banpo Hangang Park are some of the more popular spots.

When in Korea, you don’t want to miss out on Korean BBQ. While a BBQ place is located just about every corner, one of my all-time favorite spots is called Dutum, in Jungnim-dong. It’s known for high-quality pork belly, known as samgyeopsal, and other pork cuts. The queue is always long, but it’s definitely worth a wait. The friendly staff grills the thick meat for you, so all you need to do is wait and enjoy. The side dishes and vegetables complement the meat. Order the stew to eat with pork belly. 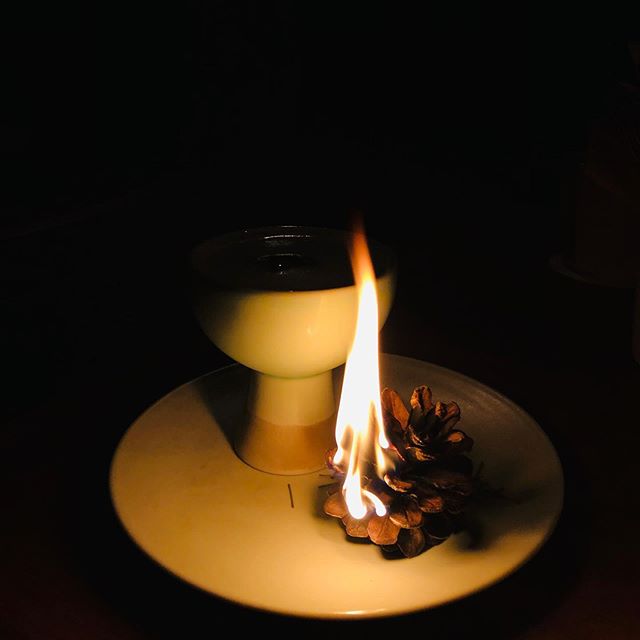 Check out Bar Cham in Seochon, one of the oldest neighborhoods in Seoul with Korean traditional houses and hidden restaurants, shops, and galleries. Housed in a beautiful Korean hanok, the bar is intimate and small, but offers amazing and creative drinks inspired by districts across Korea, using Korean alcoholic beverages. The music and ambience are great. 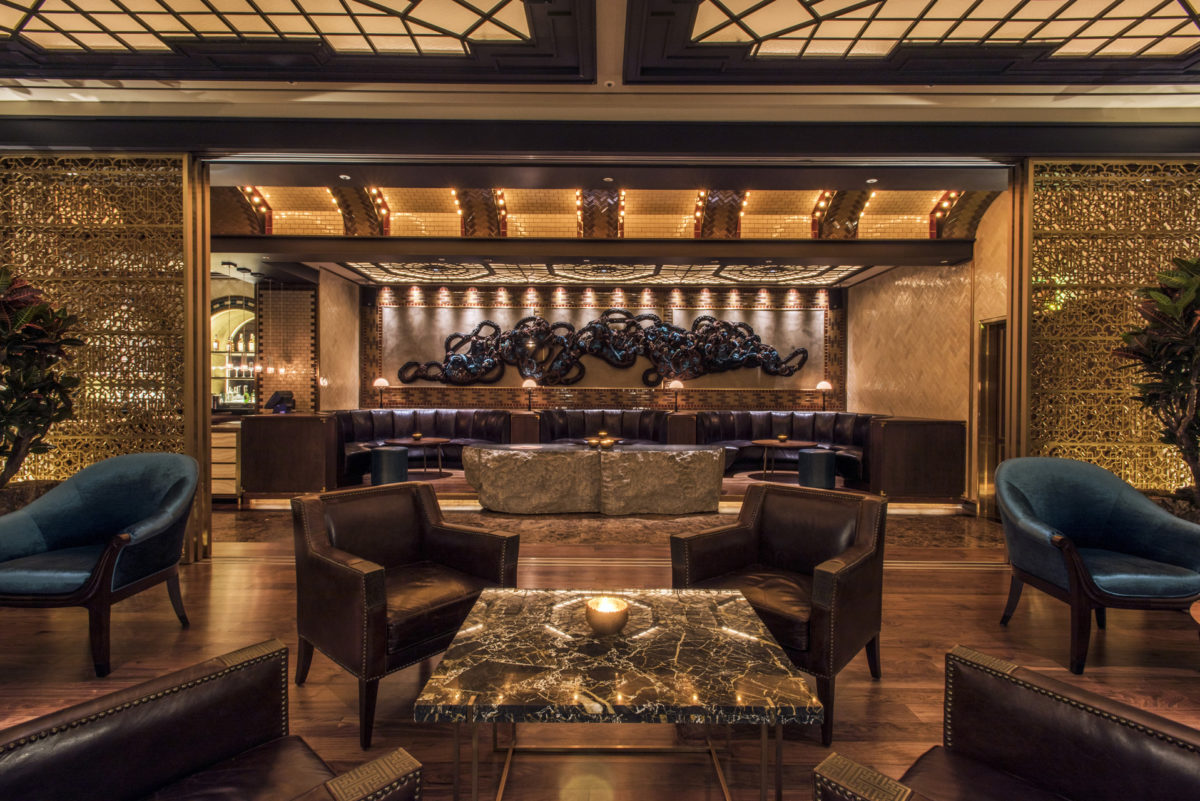 If you are feeling fancy, check out the glamorous speakeasy Charles H., tucked behind an unmarked door on the basement level of the Four Seasons Hotel in Gwanghwamun. It’s fancy and ritzy, with a feel of 1920s New York. 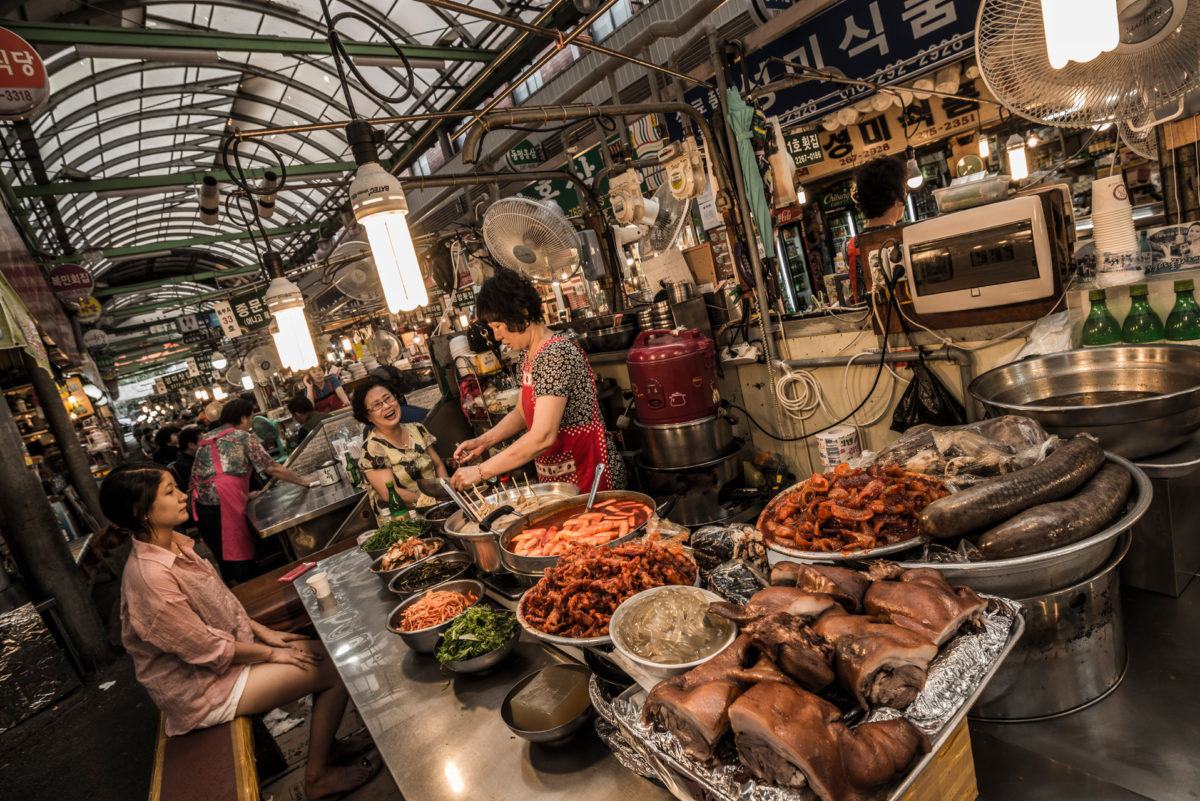 Gwangjang Market is a great place for a late night snack in Seoul, South Korea. Photo courtesy of the Four Seasons.

Gwangjang Market, Korea’s oldest traditional market that sells almost everything, is known as the foodie’s heaven, filled with a wide-array of street food stalls. Savory smells, the cooking scene, and vibrant energy will make you hungry for tasty Korean foods, including kalguksu (hand-cut noodles), bindaetteok (mung bean pancake), yukhoe (steak tartar), and gimbap (rice rolls), to name a few. There are so many street food choices that could overwhelm first-timers, but just pick the stall with the food that looks the most appetizing and busy with locals. 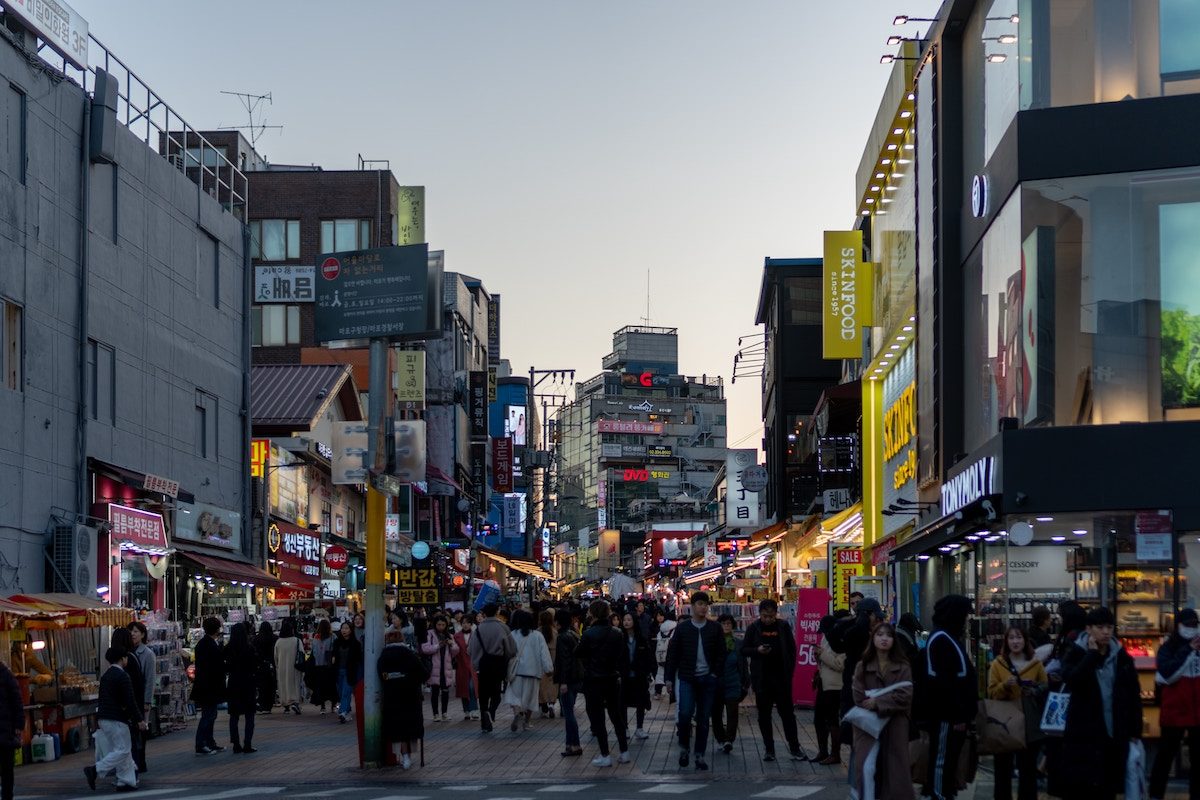 Hongdae is a top pick for an Airbnb neighborhood in Seoul. Photo by Patrick via Unsplash.

Where to Stay in Seoul

Seoul is a very safe city to visit. If you are up for some fun and a vibrant atmosphere, pick an accommodation in the Hongdae area. The recently-built and artsy Ryse Hotel is a fun place to stay. If you want a magnificent view of the Seoul skyline and Namsan, checkout the Grand Hyatt, which is also close to the Itaewon area. Myeongdong, Seoul’s shopping district, is a great place to stay for tourists that want to be close to tourist destinations.

There are four seasons in Korea, and best times are from March to May and September to November, when the weather is dry and mild. During summer it is very humid, as well as rainy with monsoon season, while winter can be freezing cold.

Seoul’s public transportation is very efficient, high-tech, and clean, voted as one of the best in the world for its ease of use and quality. You can basically get anywhere with a train or bus across the city.

Koreans are generally kind to tourists, so if you are polite and respectful of the people and culture, there shouldn’t be any problems. It’s great if you can say simple words like thank you (“gamsa”) or hello (“haseyo”) in Korean.

Watch Before You Go

Give any Korean dramas or Korean movies that are available in your country a try. Some of my top drama picks are “Descendants of the Sun,” “Goblin,” “My Love From the Star” and “It’s Okay, That’s Love.”