In recent years Savannah, Georgia, has been called the new Brooklyn. People drawn to the city’s high quality of life, plentiful studio space, and robust community flood in, including creatives who refuse to bend to the elitism of established art cities in order to gain access to the scene they love.

Instead, they build their studios and businesses themselves, their way, from the ground up. Their world is inclusive; opportunities are many, and closed doors, few. These four artists—from a jewelry designer to a ceramicist—capture the breadth of the city’s self-made creative class. 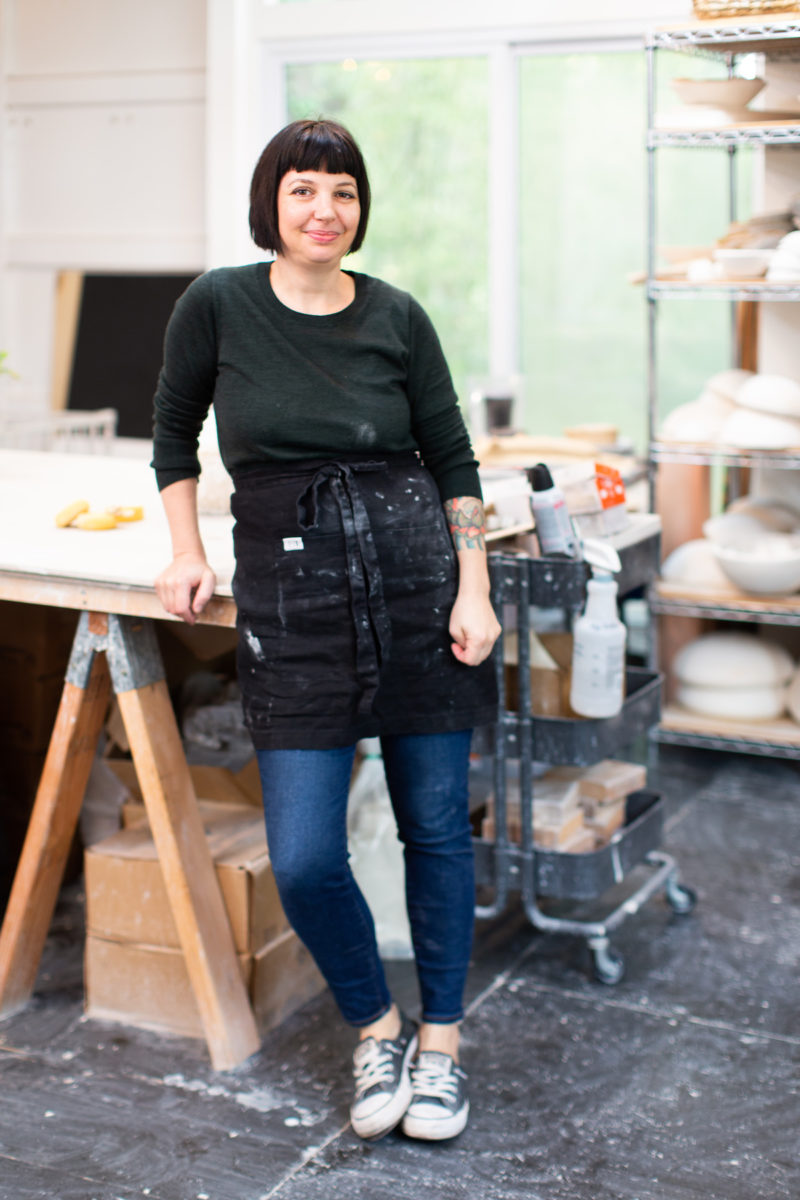 Heather Knight in her studio, Element Clay, which has been running for 11 years.
"I can't believe I went from rolling burritos as a line cook to this," she says. 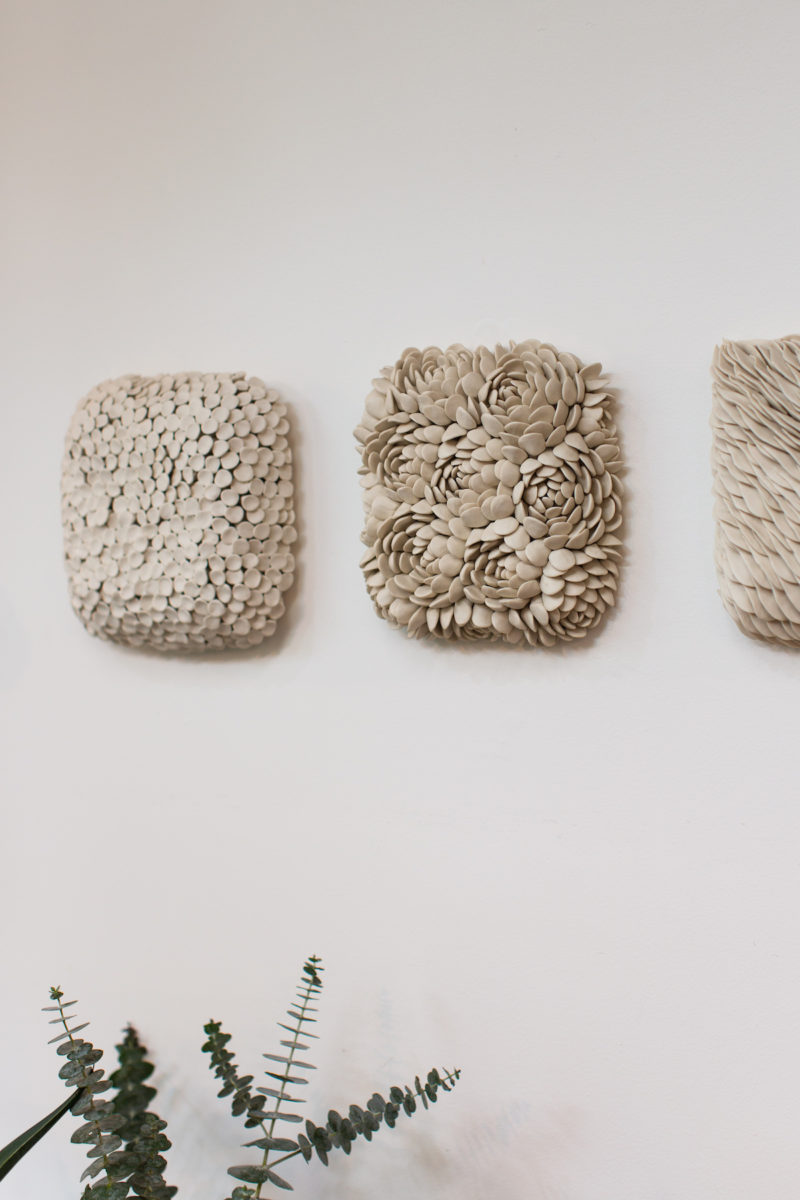 Variations of the wall tiles Knight is best known for. 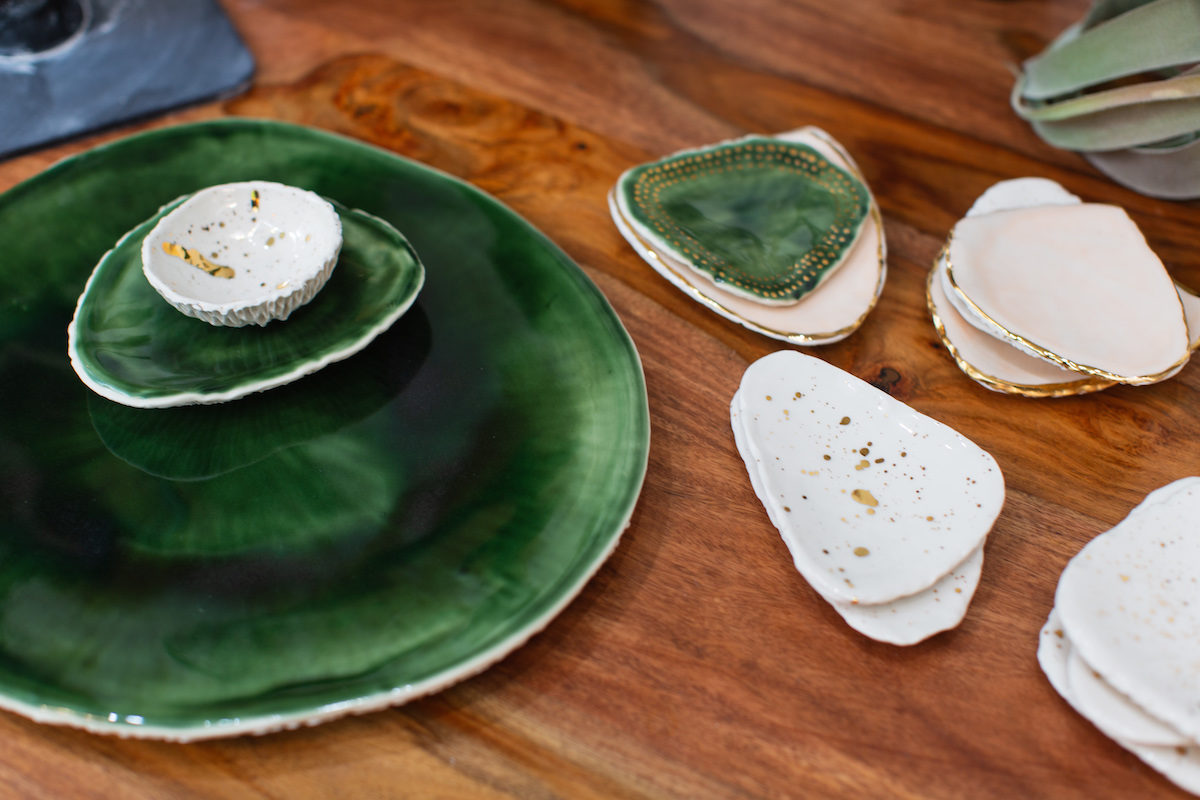 Dishware from a recent collection. 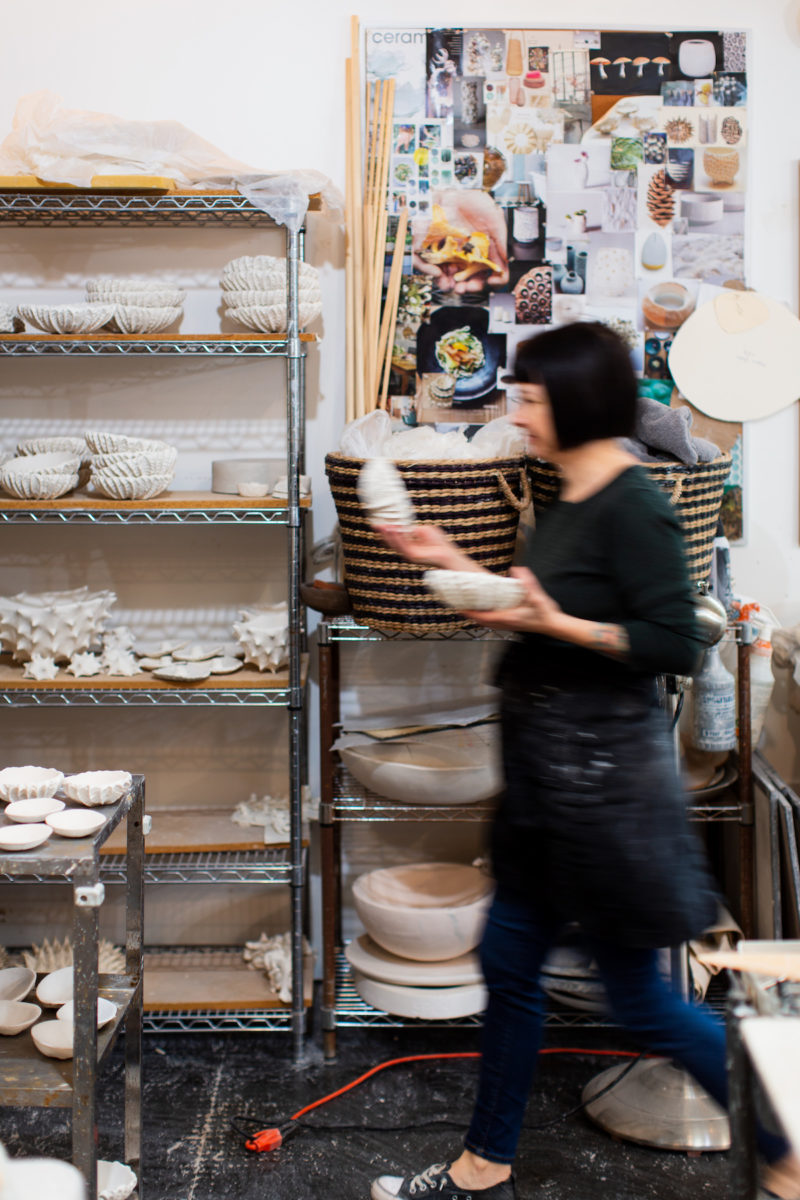 Glazed pieces on drying racks. Next, they'll be fired in a kiln. 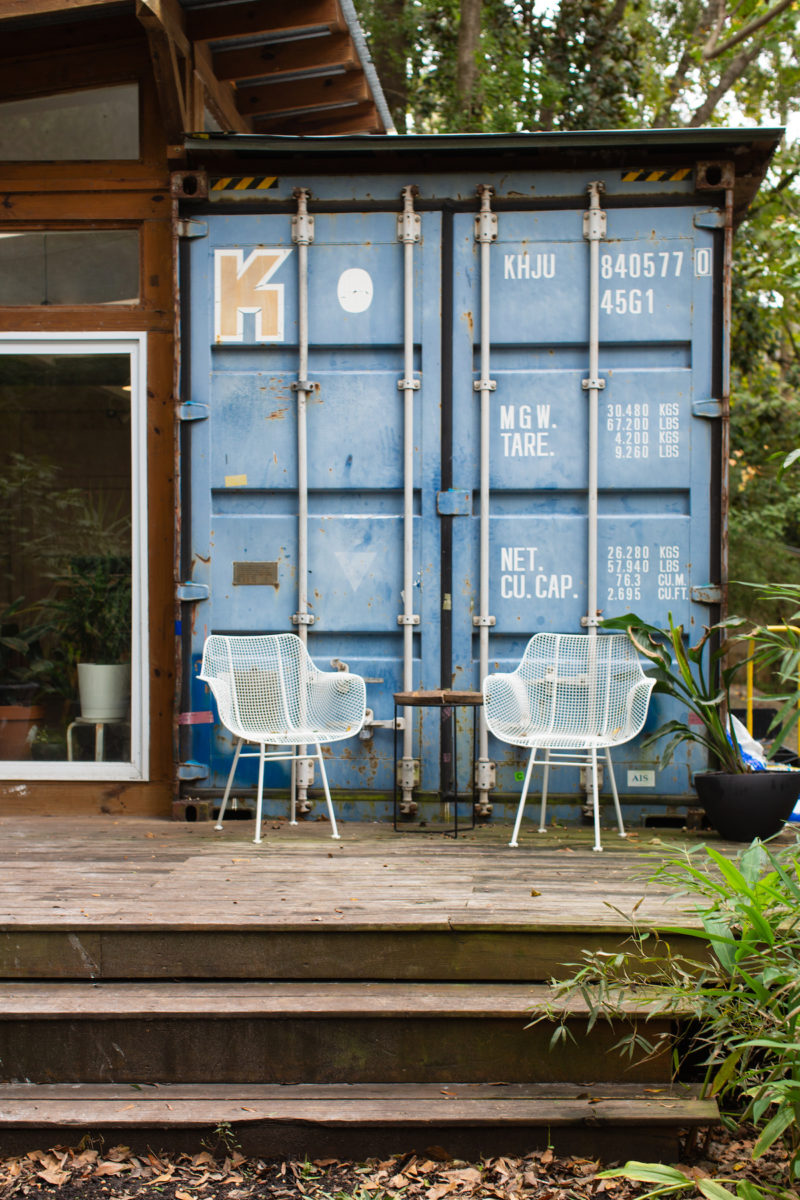 Knight's studio is partially housed in this remodeled shipping container.

“I swear I’m part mermaid,” Knight tells me, sponging a layer of glaze onto the smooth underbelly of another perfect vessel, this one with anemone spikes.

Her studio is a converted shipping container in the backyard of her home in the Avondale neighborhood. As soon as Knight and her husband saw the listing, she knew she’d received a sign from the universe to move to Savannah from Asheville, North Carolina. “There’s just a funkiness here; there’s an art vibe,” she says. “The people are kind of eclectic and a little strange. I don’t know what it is, but everywhere you go here you can have a 45-minute conversation on the street. It’s the most amazing thing.”

Everything Knight makes could’ve come out of a tide pool. Her elegant ceramic dishes, wall tiles, and objets d’art are scaled, spiked, petaled, barnacled, or suction-cupped, to a one. She loves the natural world, is inspired by it, and collects from it everywhere she goes. “I just look at nature and, you know, make its design.”

Even though her studio, Element Clay, has grown by leaps and bounds since its founding in 2007, Knight still produces everything by hand. “I support my family. That’s the thing I’m proud of. It was me. All my hard work and talent got me here. I’m going to cry because it’s so cool.” 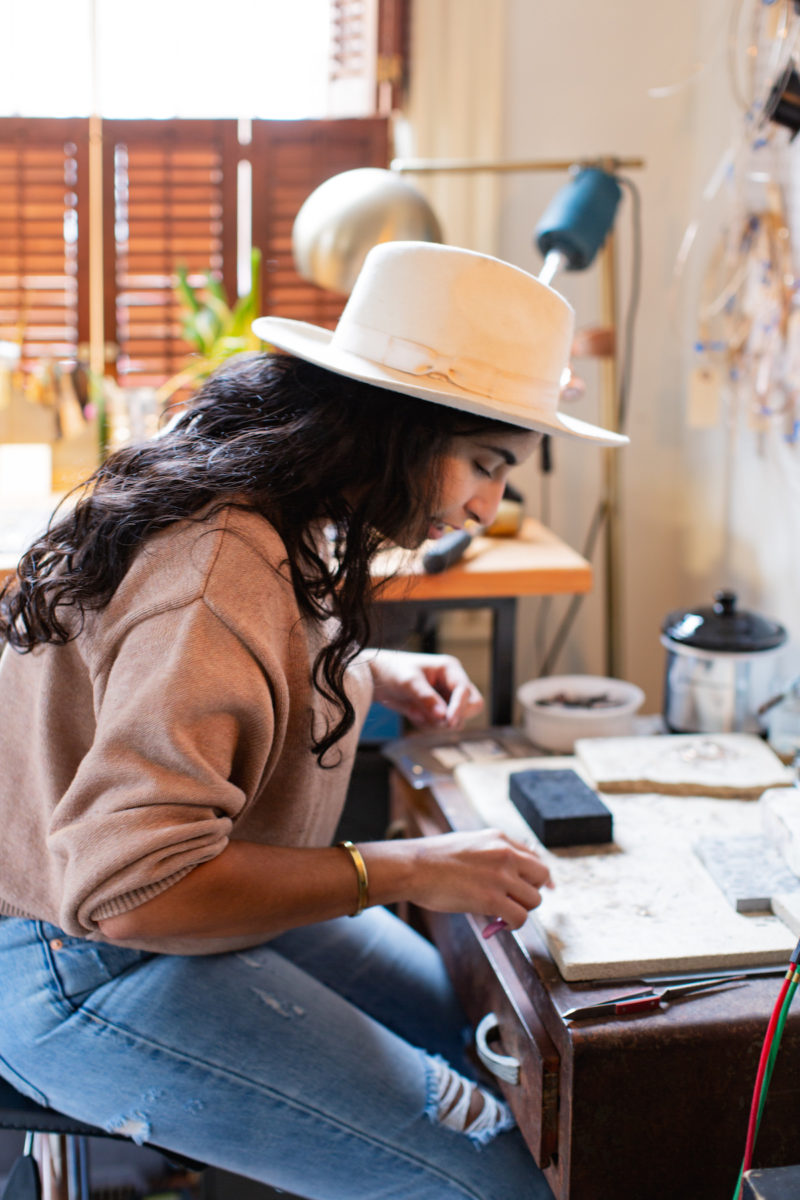 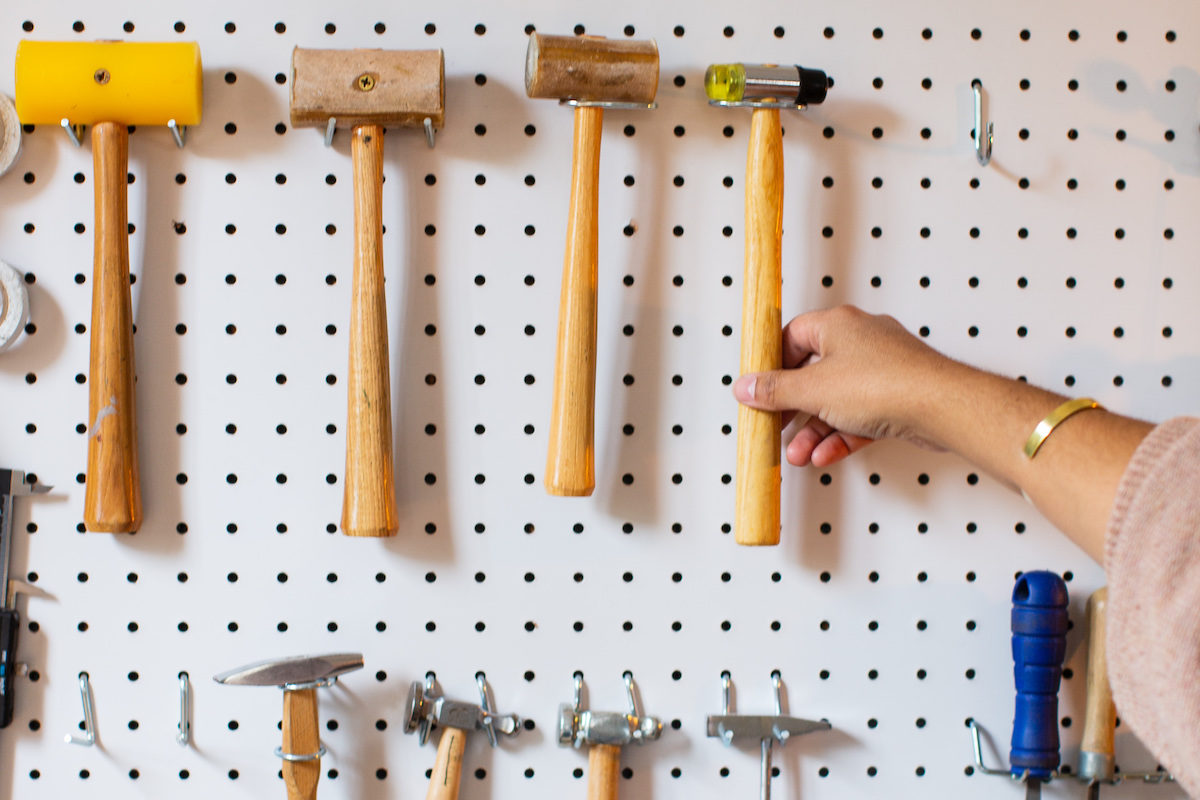 A pegboard of jewelry hammers, each one suited for a specific technique. 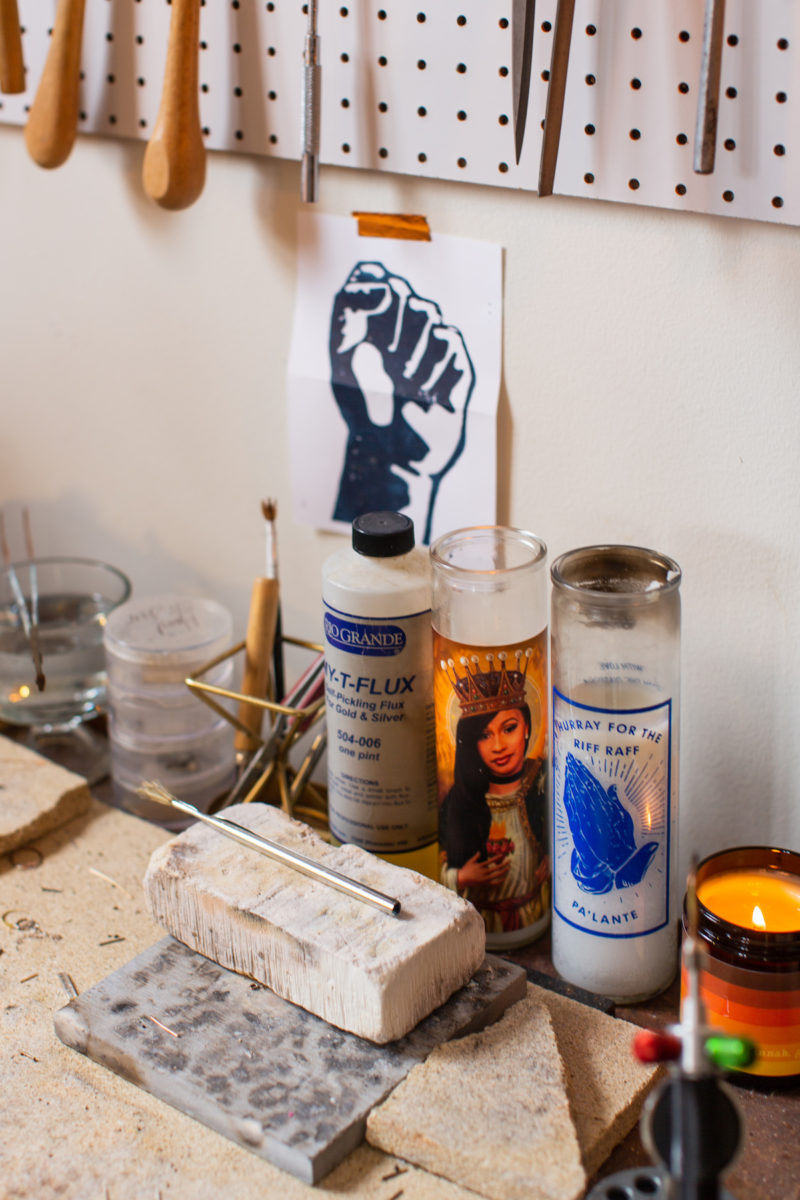 Like the rapper Cardi B, pictured on the prayer candle, Cabral Smith grew up in the Bronx. 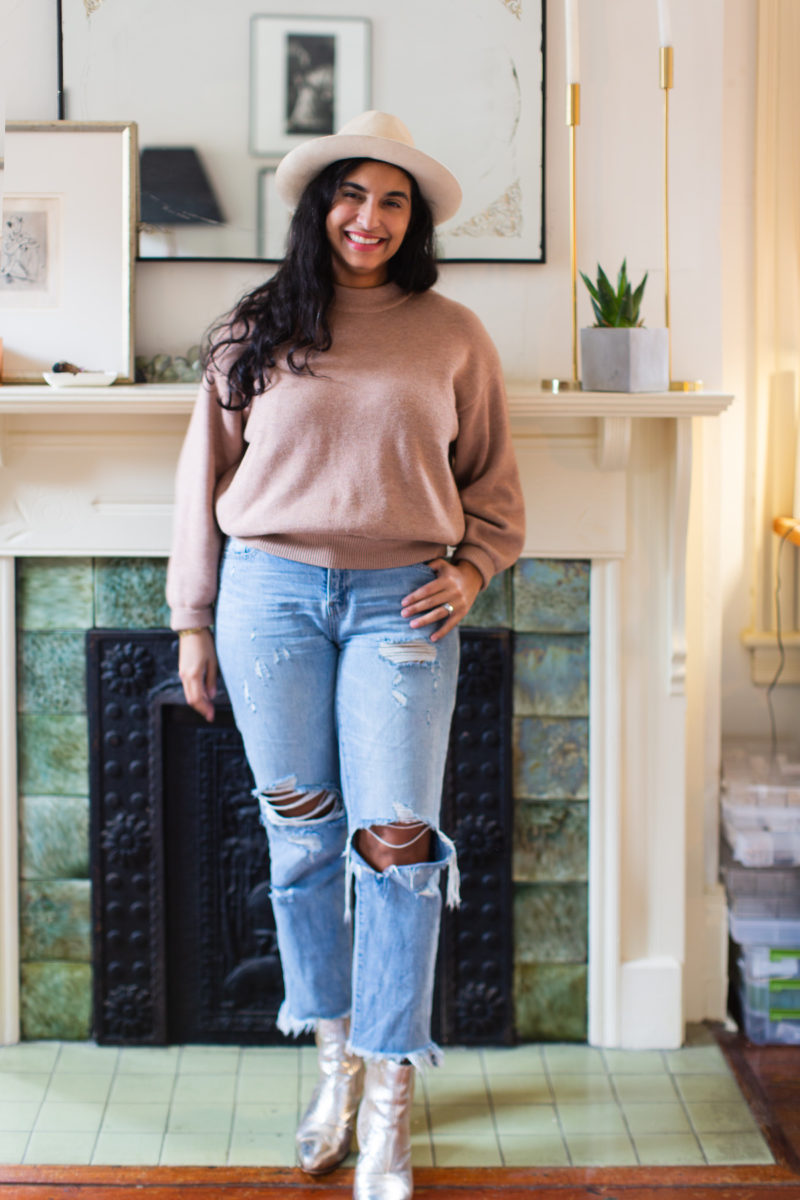 Cabral Smith credits her natural sense of style to her mother.

“From the beginning, it was for my sanity,” she says, laughing. She tells me she suffers from anxiety and that making jewelry keeps her worry-prone mind occupied. But Cabral Smith is both easy-going and at ease. Perhaps this is because we’re at her home, which doubles as her studio. Or perhaps jewelry really is a cure-all.

She picks up a piece of wire with tweezers and places it under the torch, bonding it to a delicate brass bar. This is one of her signature designs, the Linea earring. She inhales. “That smell,” she says. “The chemicals, the fire—all this stuff is really homey to me.”

Her Dominican grandfather owned a gas station in his hometown of Jarabacoa, she says. “Even though it’s toxic, there’s just something about that smell.” Other members of Cabral Smith’s family inform her work too: an aunt named Daisy who inspired a flower-shaped earring. Another aunt, Sonia, is the namesake for a pair of abstracted open hands, representing her generous nature.

“From the beginning, it was for my sanity.”

Currently, Cabral Smith works full-time at a nonprofit and is grappling with the potential of life as a full-time creative. She’s well on her way.

“I make things that everybody could wear; a guy could, a girl could; of any race, of any skin tone. Growing up second-generation American has totally affected the way I see things.” Her mission of inclusivity extends to her sales—she donates 15% of her profits to a good cause—and to her methodology at large. She saves all her metal scraps to avoid creating waste and to make room for happy accidents. “Even mistakes can turn into something really beautiful,” she explains. “It happens all the time.” 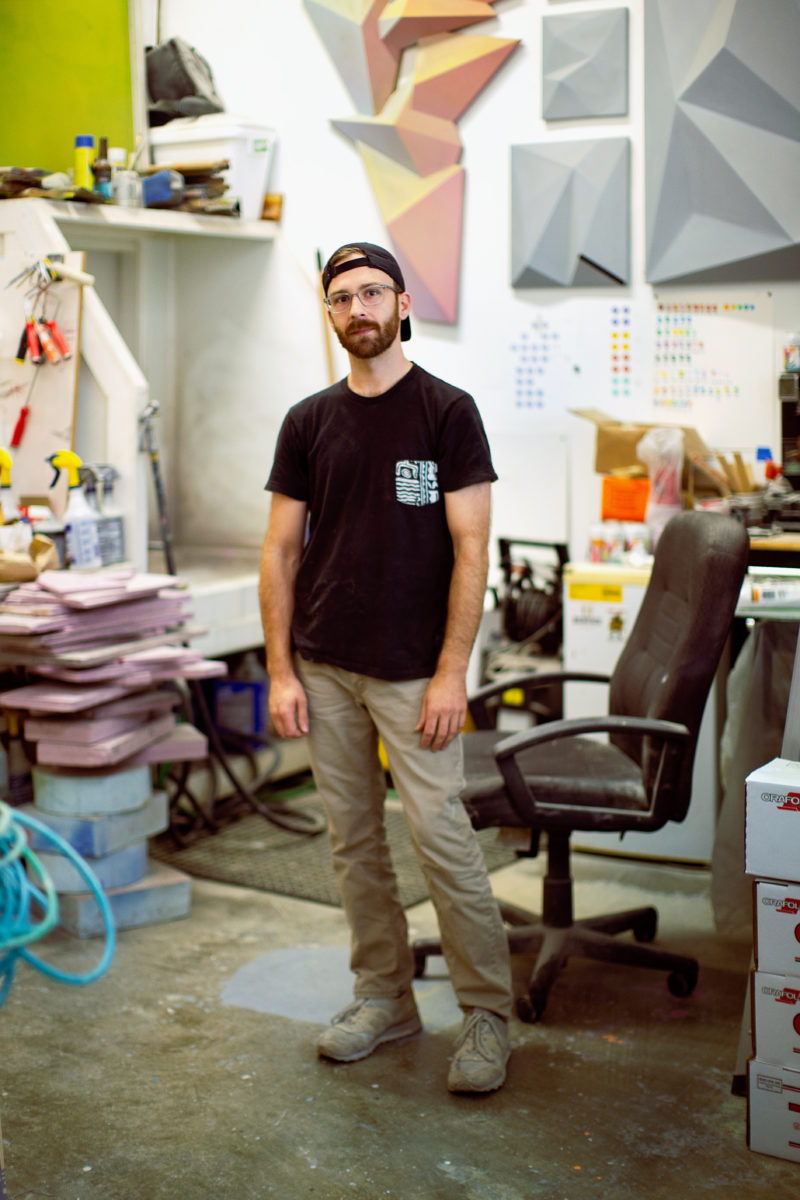 Will Penny in his shared studio space. Behind him, a number of his faceted pieces in progress. 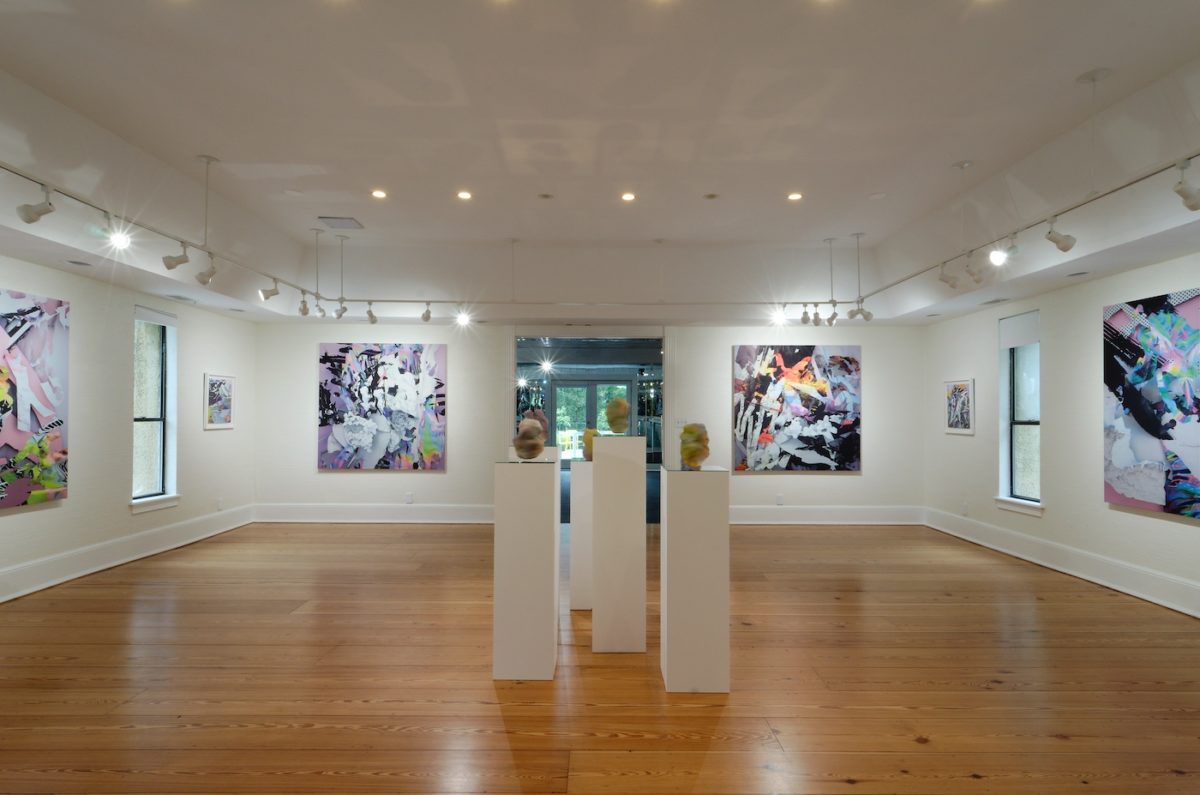 en plein air, a solo exhibition of Penny's work at Laney Contemporary, a gallery on Savannah's west side. Photograph by David Kaminsky. 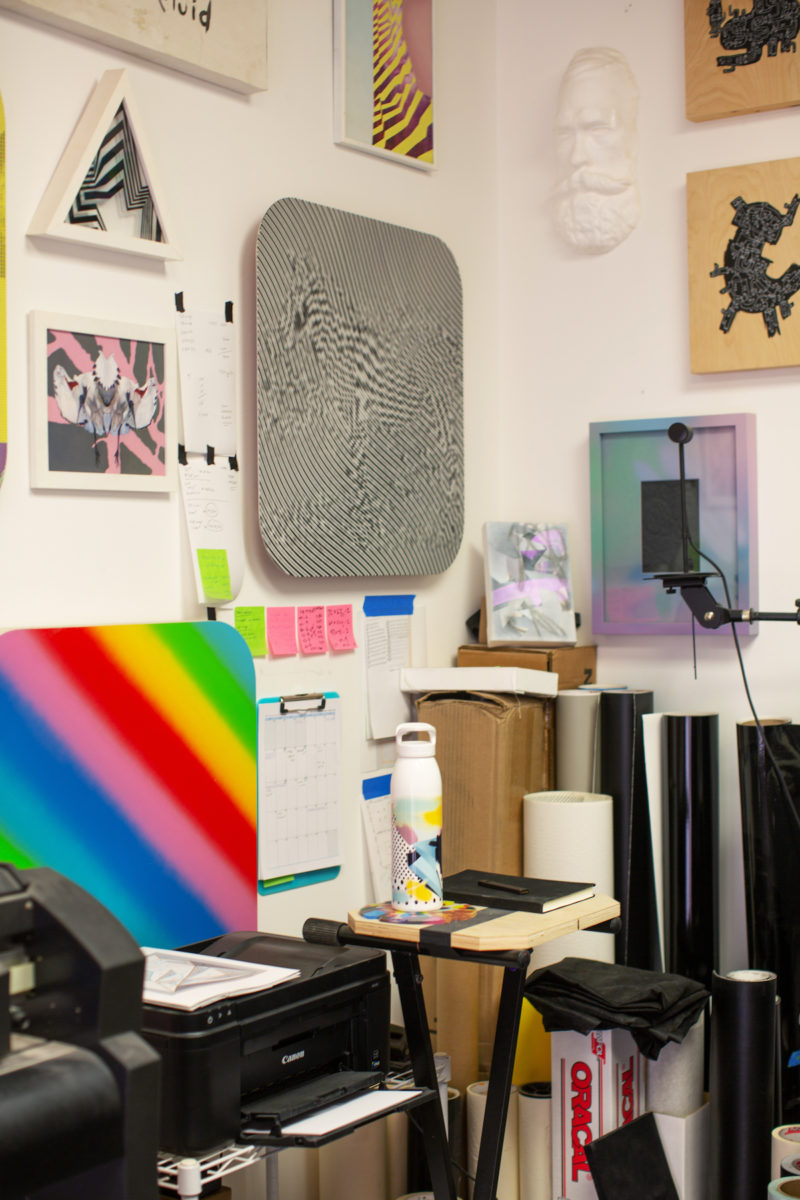 Penny's office space. The gallery wall features of mix of his older work,
material experiments, and things he's inspired by. 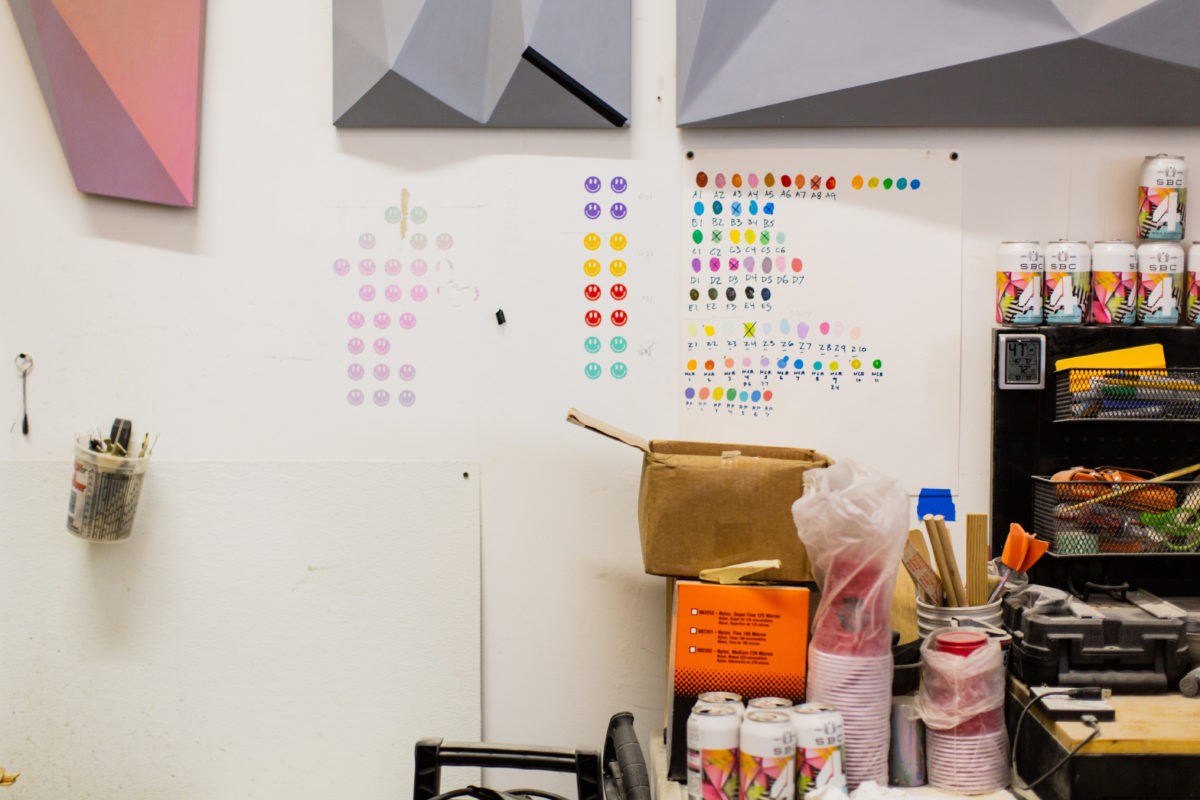 Paint swatches. "Over the summer I think I went through and tested every holographic vinyl that the world has to offer," says Penny, explaining his obsession with material and color. "I had to find the right one to work with." 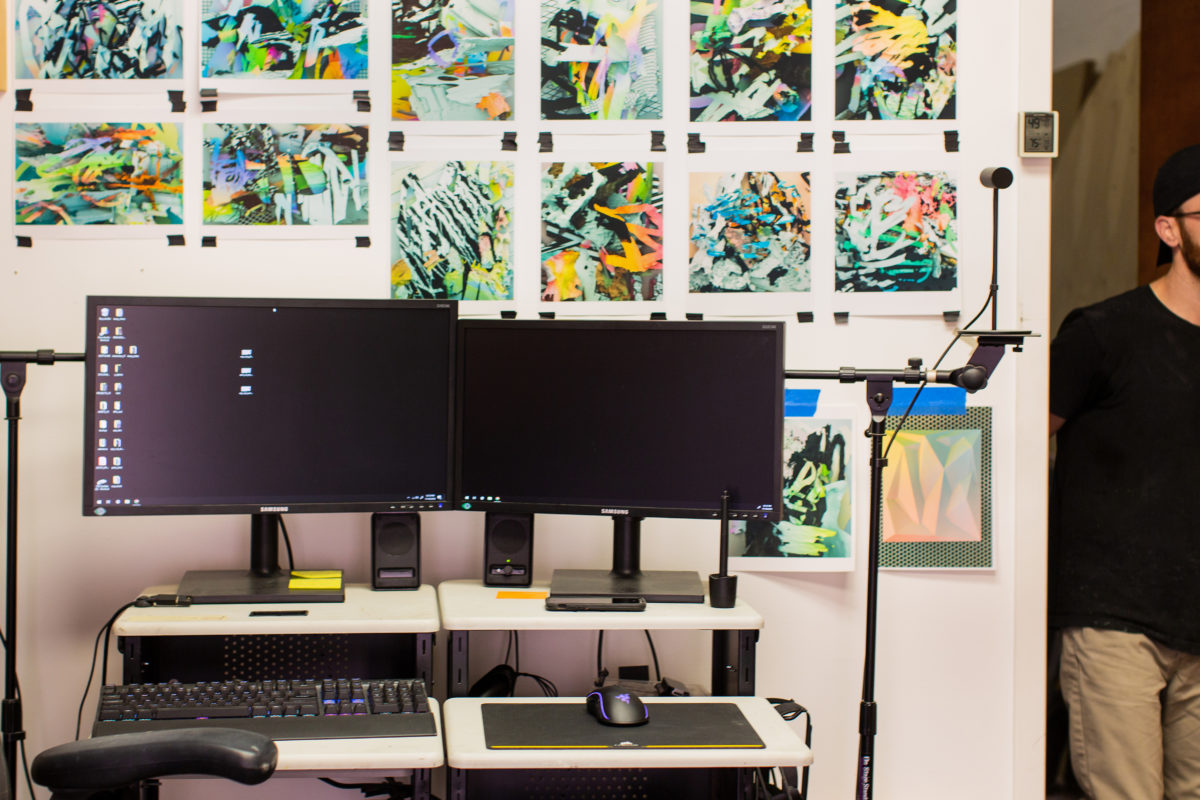 Penny's computer, with printouts of recent experiments in digital collage.

The exterior of Will Penny’s studio has the peculiar lassitude of a suburban strip mall, but the spell immediately lifts once I step inside. Penny’s studio is comprised of an office with a pleasant amount of clutter and a large industrial space partitioned with plastic and crammed with tools of the trade—from a circular saw to smiley face stickers.

Almost none of Penny’s canvases are flat. Some are geometric, with painted wood or mirrored glass facets that rise from the picture plane, reminiscent of low-fidelity topographic maps. Others are made of foam, with pocked, lunar-surface textures onto which Penny projects his paintings.

Penny is uninterested in creating rendered, coherent images. Instead, he collapses the second and third dimensions into one plane, layering graphic grids with sculptural computer-made brush strokes and 3D renderings of nature. An atypical collector, he uses a handheld device to capture the full dimensionality of natural objects rather than removing them from their environments.

“All my room to play is on a computer.”

Trained in a classical style, Penny is, by his own admission, a painting nerd—but he also loves sculpture. He mentions Anish Kapoor and James Turrell, who both play with space in their work. Penny is as interested in physical space as much as he is in virtual space. “All my room to play is on a computer,” he explains. “It expands the options I have for dealing with light, color, form.”

Penny has the heart of a classical painter and the mind of a millennial. He is as moved by oil paint on canvas as by projected light on laser cut plexiglass. To do his work, he asks himself: “If a classical painter were to make something in this space, how would they work?” 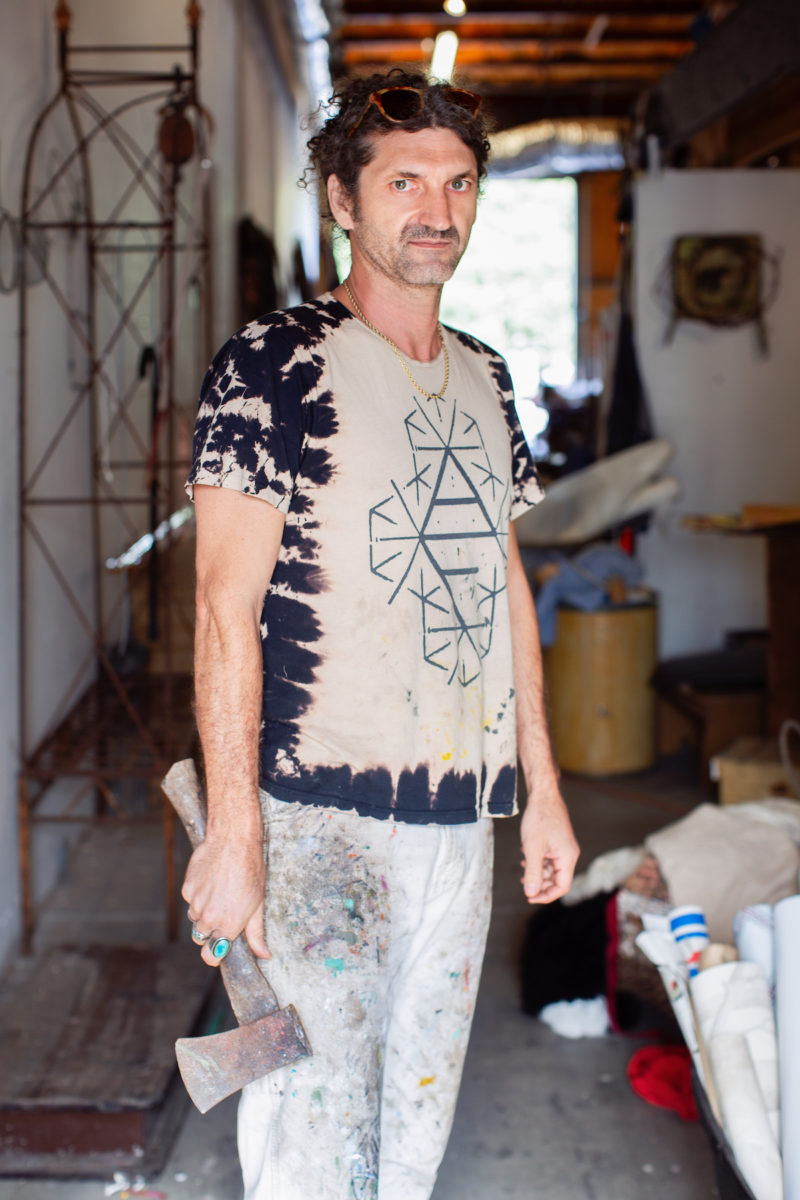 Marcus Kenney at his studio. 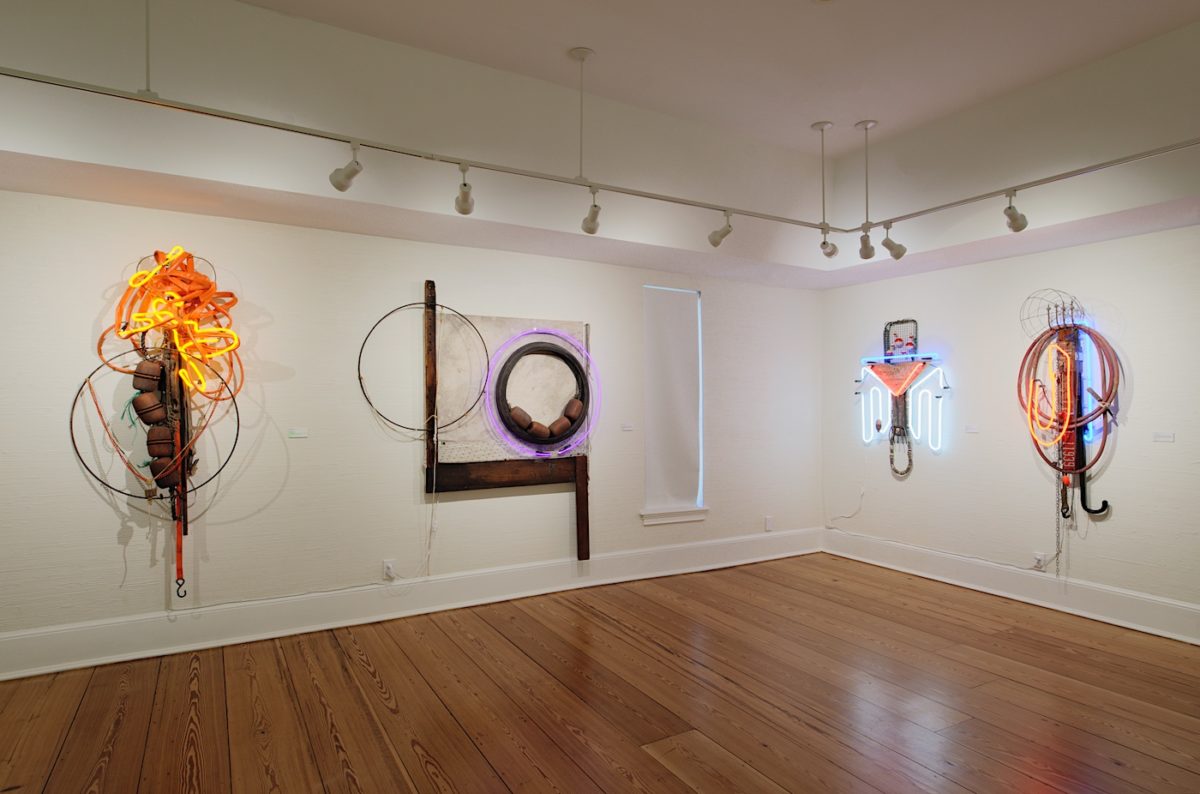 Pieces in Look! I'm Over There, Kenney's 2018 solo show at Laney Contemporary. Photograph by David Kaminsky. 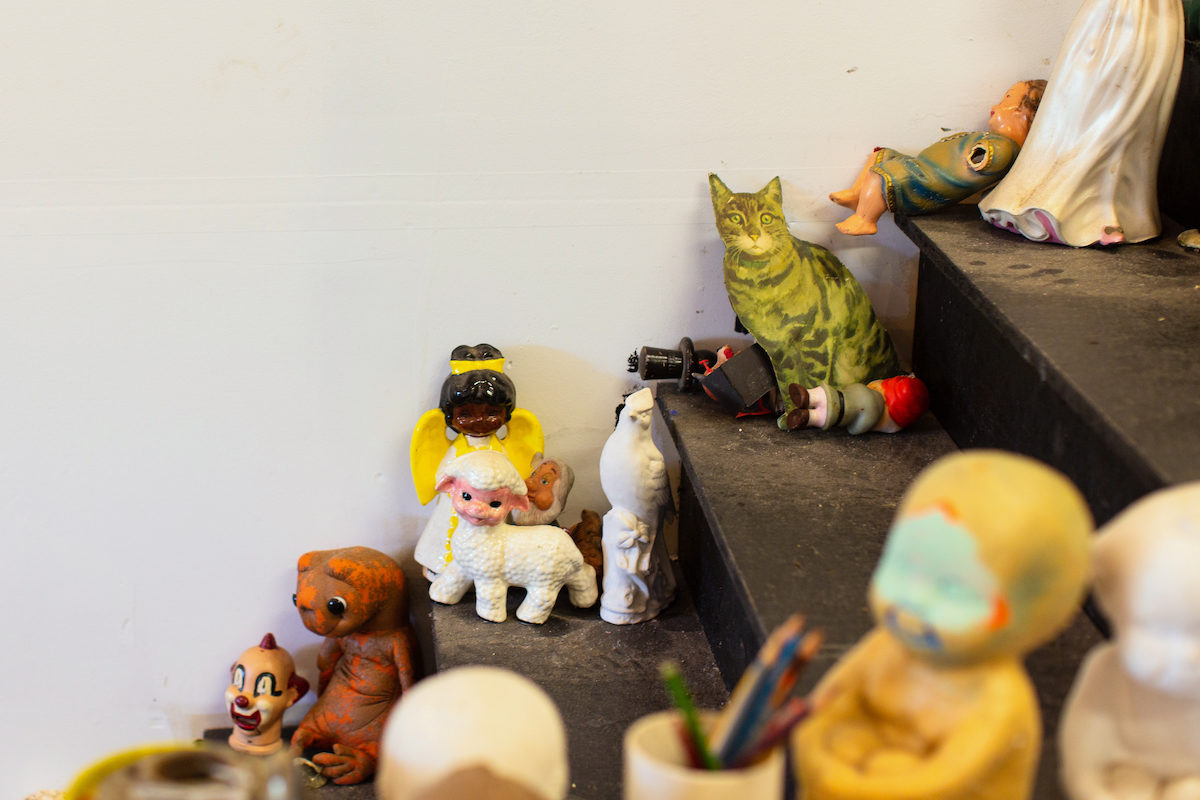 Collected material in Kenney's studio. Some will remain decor, while the rest will be repurposed as sculpture. 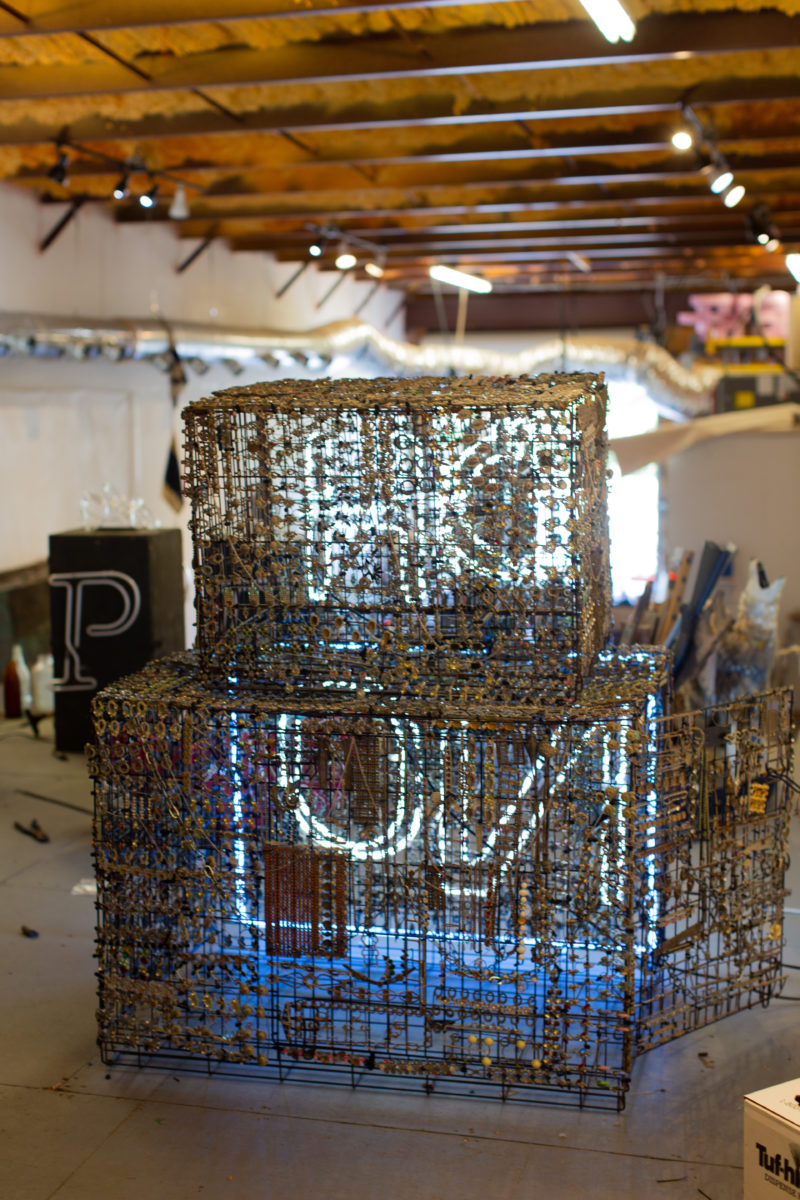 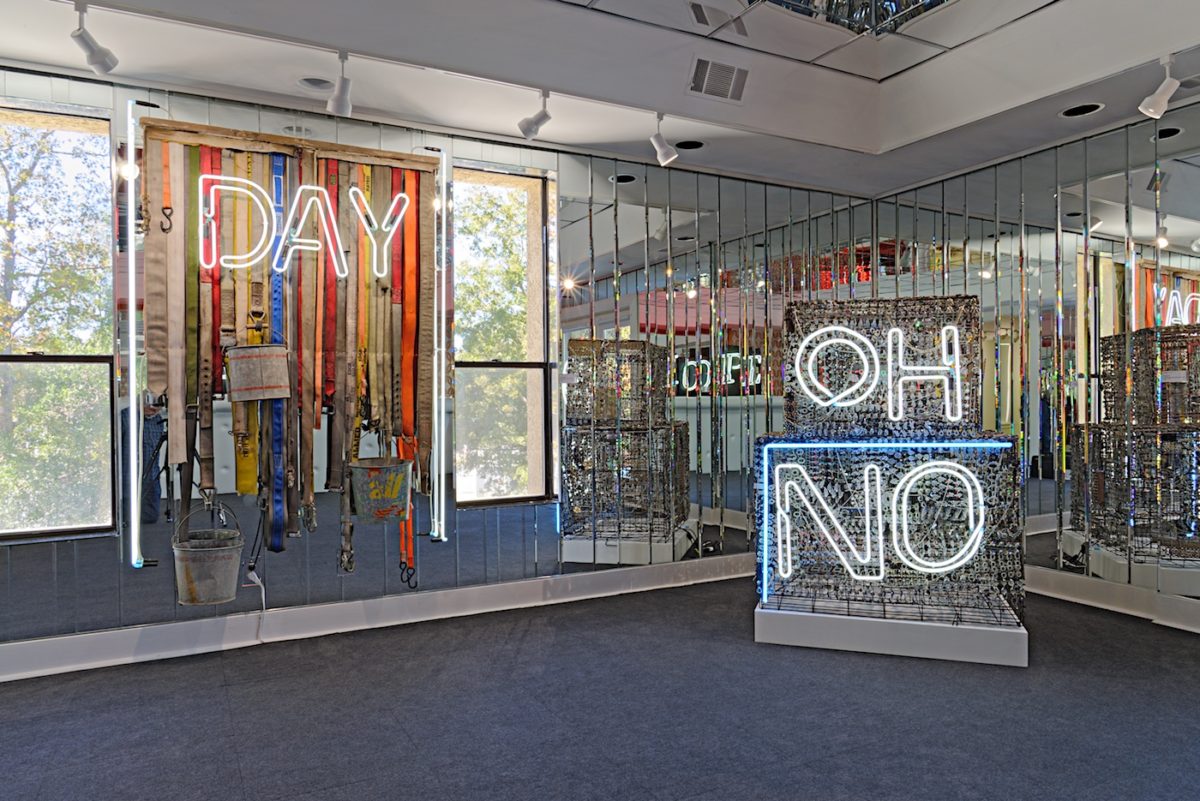 The finished sculpture on site at Laney Contemporary. Photograph by David Kaminsky.

Marcus Kenney’s studio is a cavernous warehouse filled with an expansive, eccentric collection of junk. There are buckets of broom handles, mason jars of costume jewelry, boxes of fabric and cord. A menagerie of animal figurines and baby dolls lines the staircase of the makeshift loft. The plastic utility sink is completely covered in paint splatter. This is Kenney’s nest. He’s a magpie—a collector of misfit things—in both manner and appearance. He’s perched on the loft platform when I arrive, at work on a piece. Focused and sure-footed, he darts around the mess in pursuit of the perfect doo-dad.

Kenney has the appearance of an artist—he would fit in easily in New York or LA—but his voice is full of old-school Southern charm. He moved to Savannah from Louisiana in the mid-90s to study photography at SCAD and never left, but digital cameras hit the market just as he graduated, rendering all his expertise with film obsolete within a few short years. Luckily, his talents extended to sculpture and painting. “I haven’t had a real job since about ’98,” he says, with a touch of pride.

“I take things so I can give them a new life.”

Whether flat or freestanding, all of Kenney’s works are coherent and striking, almost graphic, from a distance—despite the fact that a single sculpture could easily have thousands of pieces of material. “There’s never a moment I stop collecting; I’m pretty diligent. If I see something, I’ll pull over,” Kenney says. From yards of rope washed up on a beach in Puerto Rico to a neon fabrication shop filled with functioning signs in Florida, the whole world is his palette.

“I can’t pass a broom or a rake or a shovel that somebody’s selling on the side of the road because I just think about all the things that have been done with them. I guess I take things so I can give them a new life.”