Milan may be the fashion capital of Italy, but in Rome, unique opportunities for secondhand shopping are abound, providing a small but impactful counteraction to one facet of the city’s ongoing waste crisis. One neighborhood in particular is setting an example that any eco-conscious fashion fanatic can appreciate.

The hangers squeak on the clothing rack as I riffle through used treasures, one after the other—some long-defunct Italian fashion brands mixed with your average Fendi, Missoni, Moschino, Prada. On a mission to imbue my relatively minimalist wardrobe with some tastefully flashy, well-made Italian pieces, I’ve already scoured a handful of secondhand clothing stores in Monti, a small neighborhood near the Colosseum and arguably the coolest area of the city right now. I don’t know what I’m searching for until I’m stopped in my tracks—a gold-on-black label with the distinctive Medusa head. Deluxe fabric. Bespoke tailoring. It’s herringbone and pin-striped. It has metallic threading. It’s a ’90s-era Versace shift dress.

I’m at Blue Goose on Via del Boschetto, a main thoroughfare in Monti that has remained relatively calm, at least compared to the rest of Rome. I’ve spotted one of the most coveted labels in fashion at a matchbook-sized vintage boutique that’s practically bursting at the seams with high-quality inventory. I’ve come to understand, however, that this is what one can expect from the secondhand shopping experience in Rome, and this neighborhood in particular.

For the best of Rome’s vintage scene, shop these 11 stores. 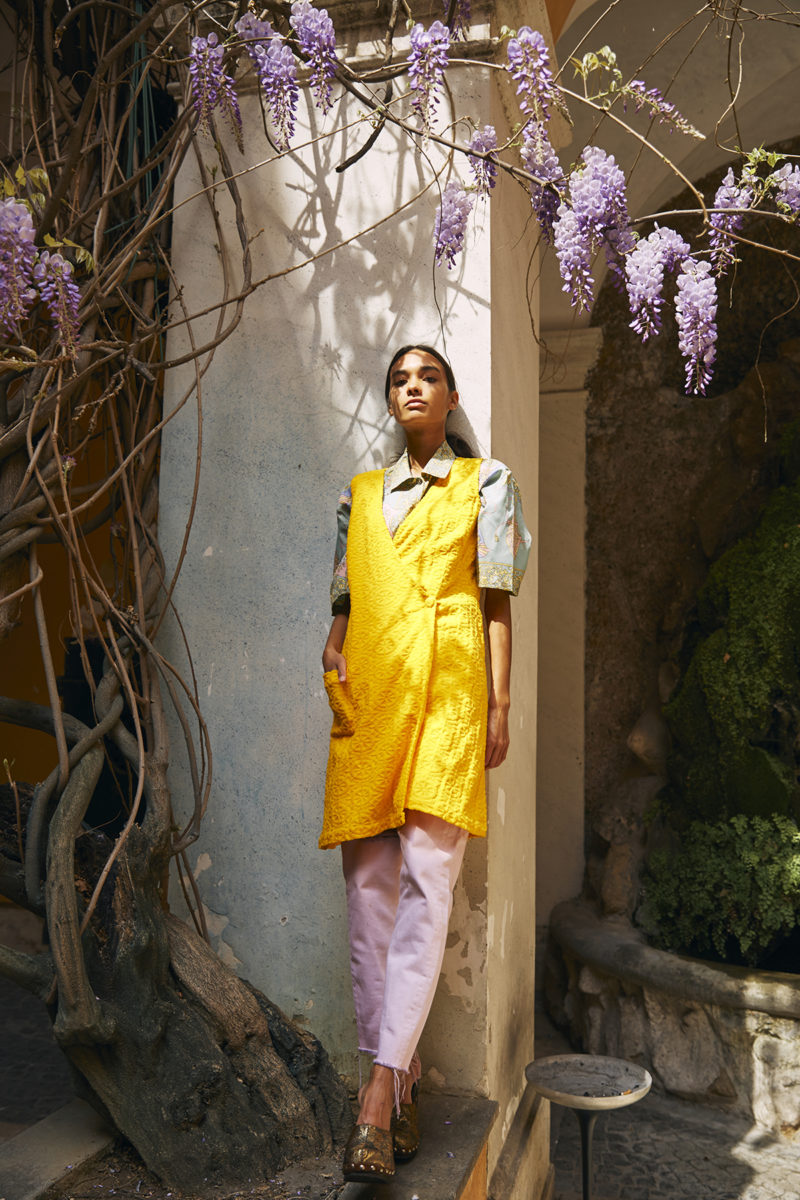 Wisteria was in full bloom in this piazza in Monti. Clothing from King Size Vintage. Shoes: Miu Miu. 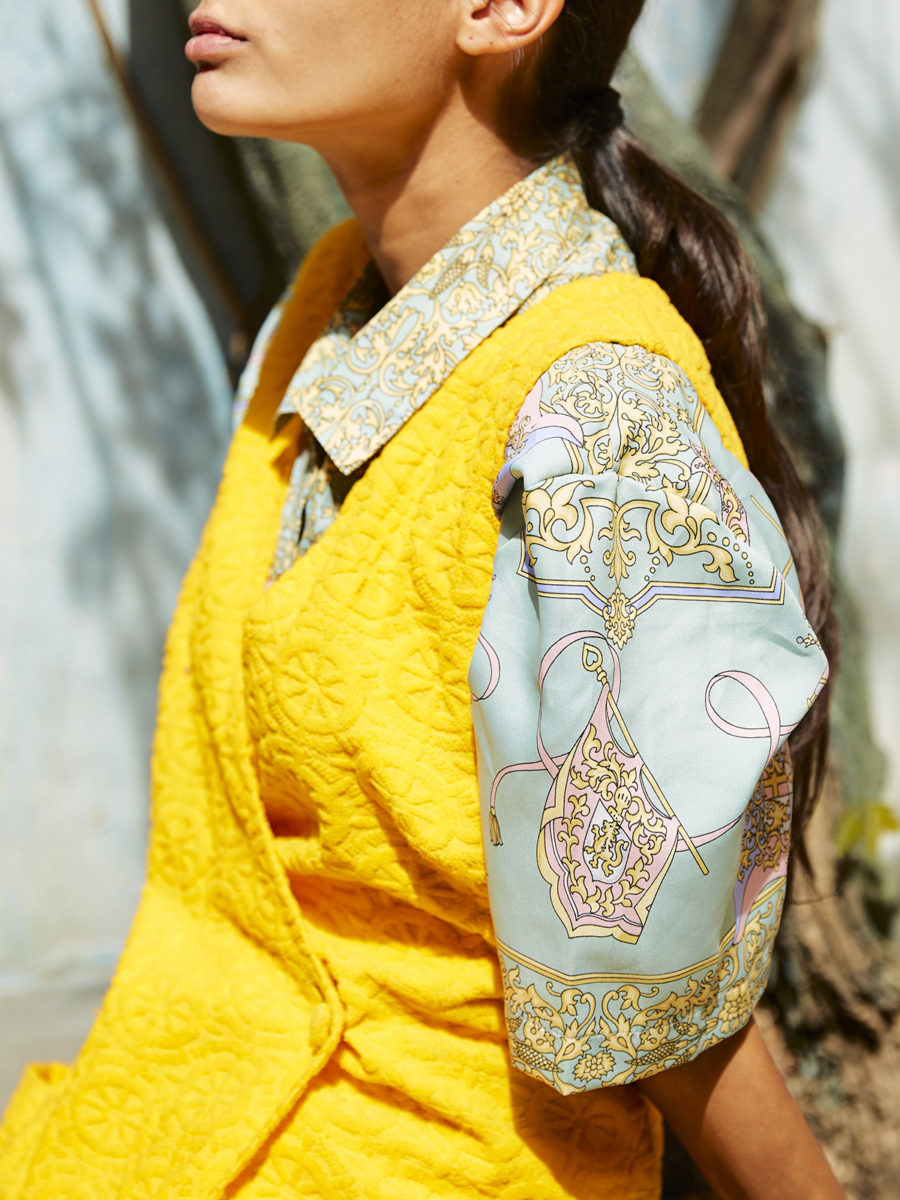 “Because my shop is small, I prefer to be selective,” says Carlotta Cerulli, owner of Flamingo Vintage, just down the street from Blue Goose. And though the size does create constraints, it seems that most vintage store owners offer a hyper-personal point of view—they are chief editors of their own fashion closets. Cerulli’s parents, for example, owned a business that rented clothes to the Italian film industry (“I grew up surrounded by old things; I love old things”) and the romantic modern glamour of her store reflects that upbringing.

What’s less prevalent in this community are large thrift warehouses where you have to sift through a hundred things before you find anything noteworthy (the Porta Portese market in Trastevere on Sundays is the closest thing). This doesn’t mean there isn’t variety, however; just a higher concentration of quality. There are upwards of nine vintage, consignment, and secondhand clothing stores in Monti’s small surface area (you can walk from one side of the neighborhood to the other in less than 10 minutes), and each offers its own unique selections that exhibit Italy’s central role in creating quality materials for fashion brands all over the world. Tuscany is famous for its leather, Umbria for its wool, and so on. 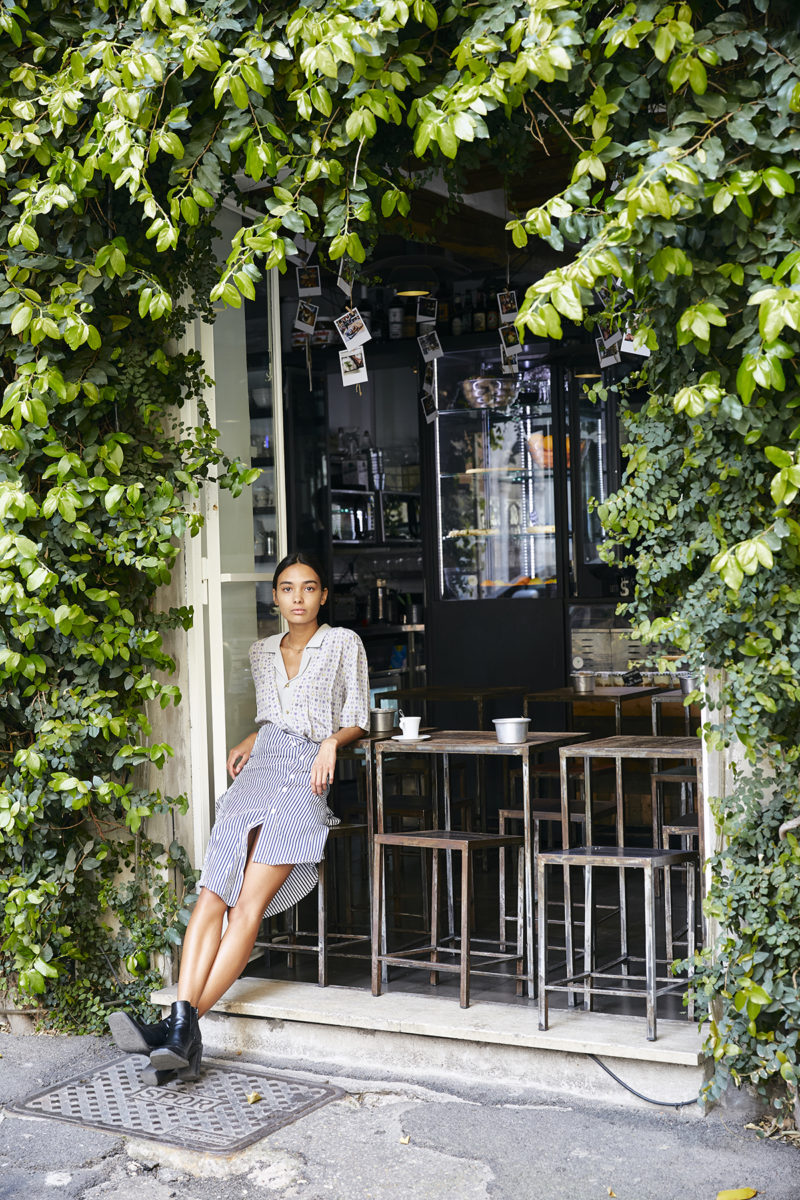 This ensemble is made from two men’s shirts. Clothing from Le Vesti di Messalina.

The curation and, as a result, the quality of the selections come at a premium. “Good clothes are handmade,” says Matteo Murru, owner of the avant-garde consignment store Moll Flanders. Though not necessarily cheap, pieces do come at a good value—a €1,200 Yamamoto jacket will go for closer to €700 on consignment, whereas the Versace dress at Flamingo was €90. “There is a problem with consumers,” he continues. “We buy items and wear them one or two times and then waste them; but these clothes are built to live forever. This is not ‘fast fashion.’”

Murru told me he believes it’s important to be intentional with where you spend your money. “If people learned more about the production industry, they would change their mind about certain brands,” he says—by shopping at stores with high-quality and highly curated secondhand clothes, it’s much easier to reduce your individual consumer waste.

Check out our guide to Rome for the best restaurants, stores, and stays in the Eternal City. 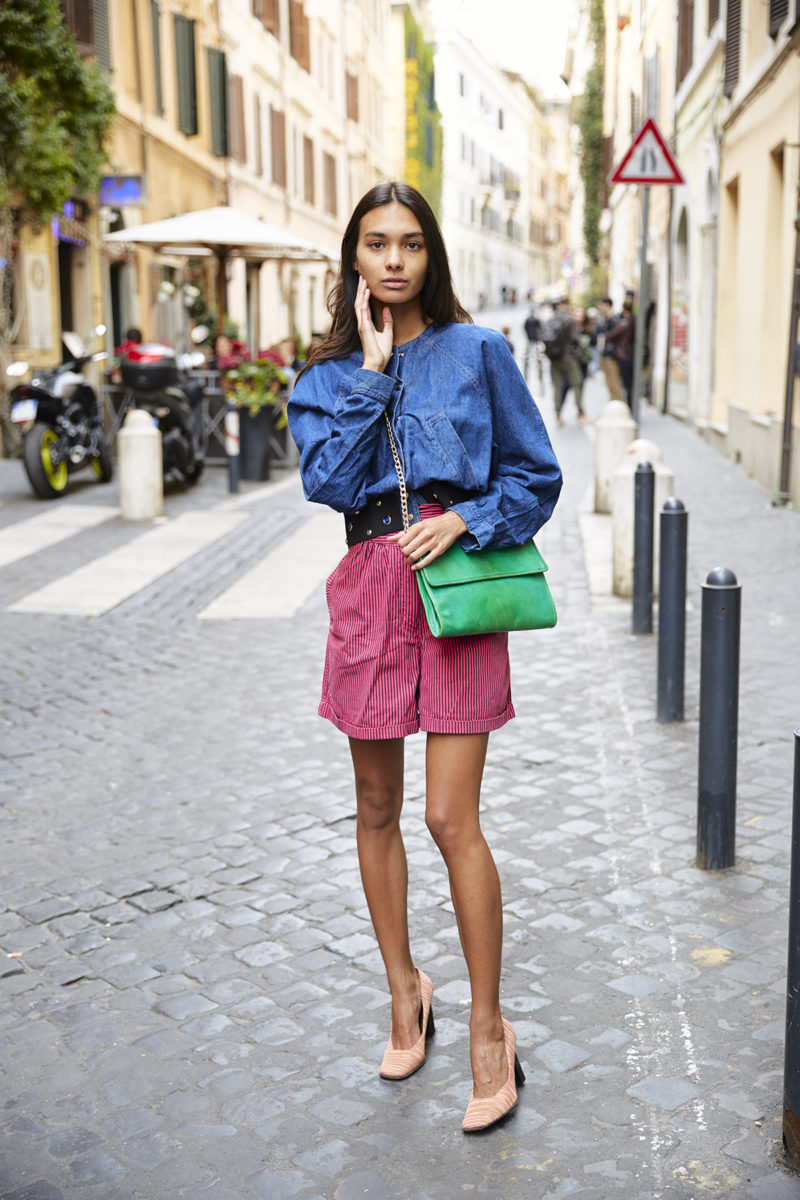 A catwalk on Via del Boschetto in Monti, a main drag with many vintage shops. Clothing from Flamingo Vintage. Shoes: Missoni

Indeed, Monti is a mecca for slow fashion, which is fitting for the oldest residential neighborhood in a city that is boldly resistant to change, for better or worse. On almost every block in Rome, you’ll find a historic site, or at least a view of one—relics erected in Rome’s original heyday with varying levels of preservation. And in spite of the way it’s become ground zero for hipster tourists in Rome, Monti still feels like a place that resembles its old self.

But resistance to change has its downsides. Though upcycled fashion is popular in Rome, in other sectors, the city fails to reflect the same zeal for sustainability. In terms of progressive, eco-conscious policies, Rome lags far behind the rest of Europe—and even the rest of Italy. 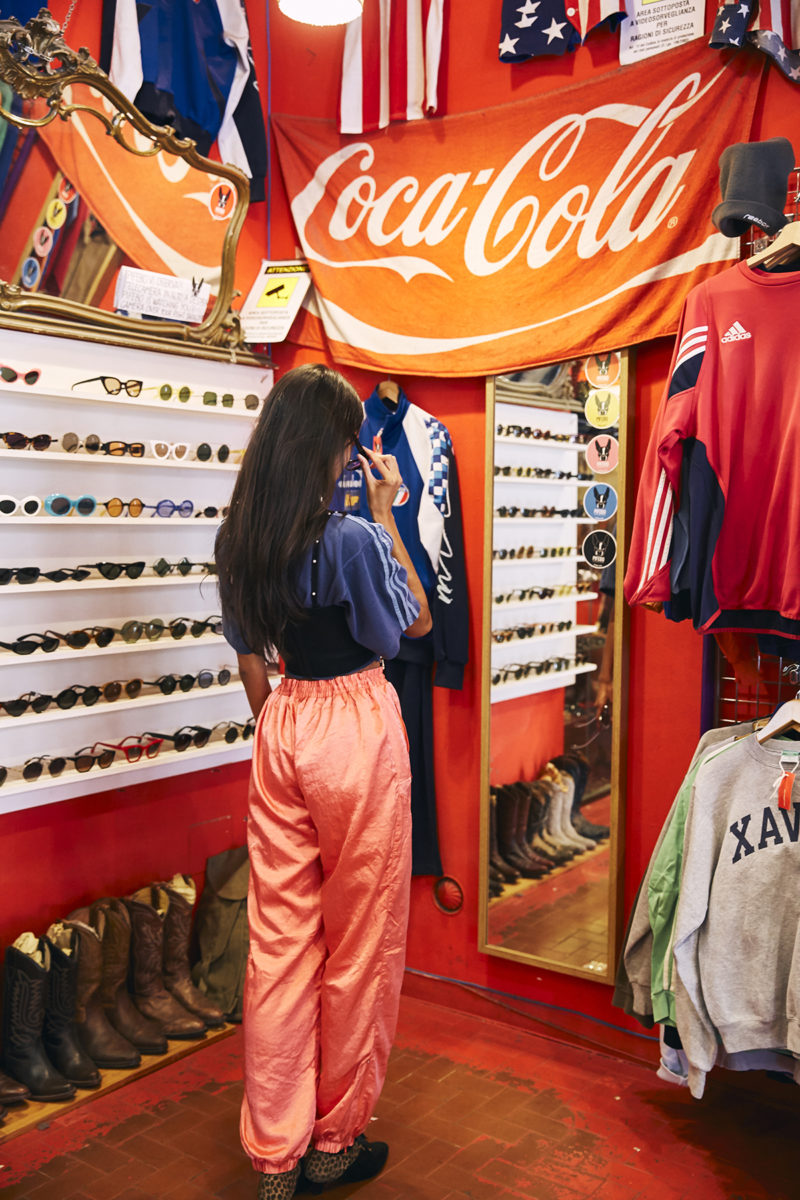 Inside Pifebo, an Americana-themed vintage store with a bulk-buying outpost next door. Clothing from Pifebo. Pants: Puma

“Milan recycles up to 70 percent of its waste, and in Rome it’s only about 40 percent,” says Massimiliano Tonelli, a Roman native and journalist who keeps the blog “Roma Fa Schifo” (“Rome Is Gross”), which tracks the Eternal City’s trash problem. Trash is quite visible on the streets and in other public spaces. But in a city with so many distractions—from its historic and cultural splendor to its metropolitan hustle-and-bustle—the issue of waste is too easily overlooked.

The reality, Tonelli explains, is that the city’s infrastructure is poorly equipped to handle much waste at all, and there isn’t political momentum to enact real change. “It’s going to take a lot of political vision to make a difference,” says Tonelli. The current mayor of Rome, Virginia Raggi, was elected in 2016 on a platform proposing to fix the waste crisis, but Tonelli hasn’t seen much change so far. Last December, there was a major fire at the city’s main disposal center, and schools were forced to close for over a week amid public health concerns about the waste. 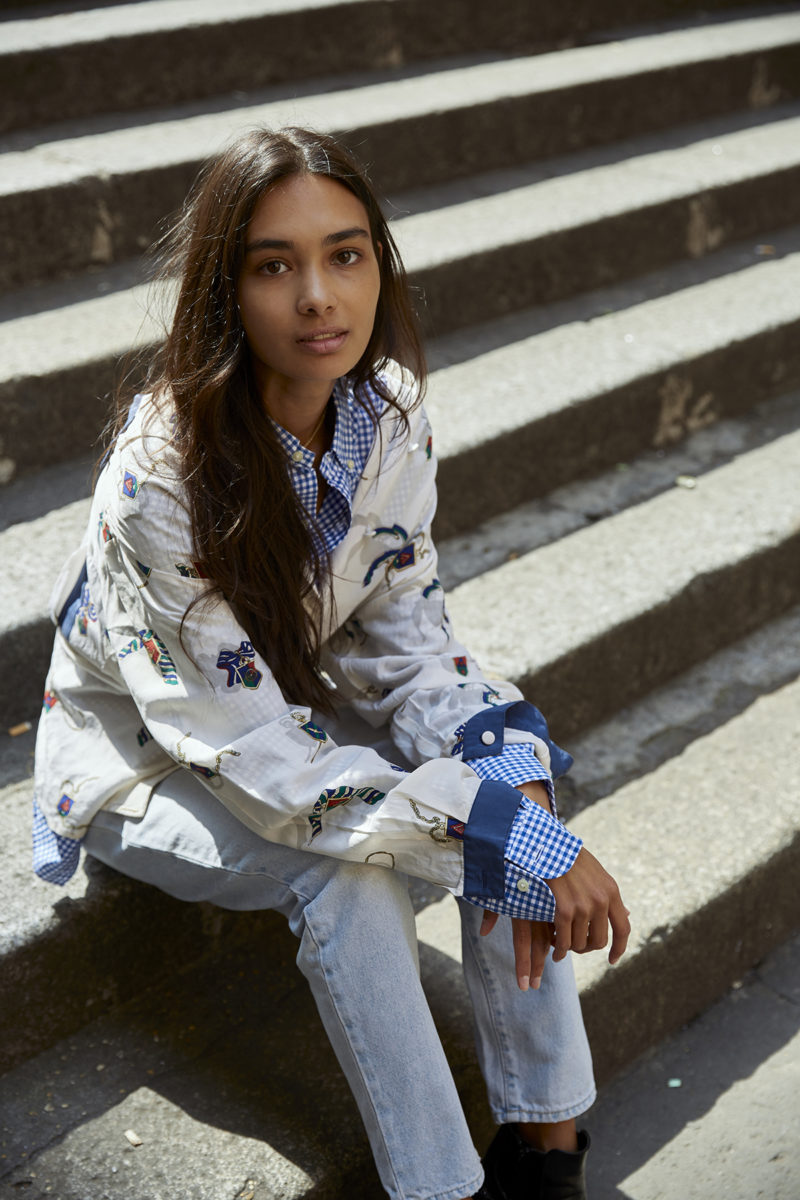 In Monti, the recycling programs are a little bit better—perhaps not coincidentally, since it’s Rome’s alternative fashion and commerce district. “Monti is more sensible because the people who work here also live here,” claims Cerulli. Recently, a neighborhood association of shops and traders formed Monti Green, which won a tender from the local government aimed at the ecological improvement of the area, from the increase in public green areas to the collection of used glass by local bars.

Though certainly not perfect, the streets do appear cleaner here, perhaps another reason why this neighborhood has become more popular. Like the clothes in the stores of Monti, this place feels cared for in a way that makes you want to slow down to enjoy the way the city has endured and evolved over the course of millennia. 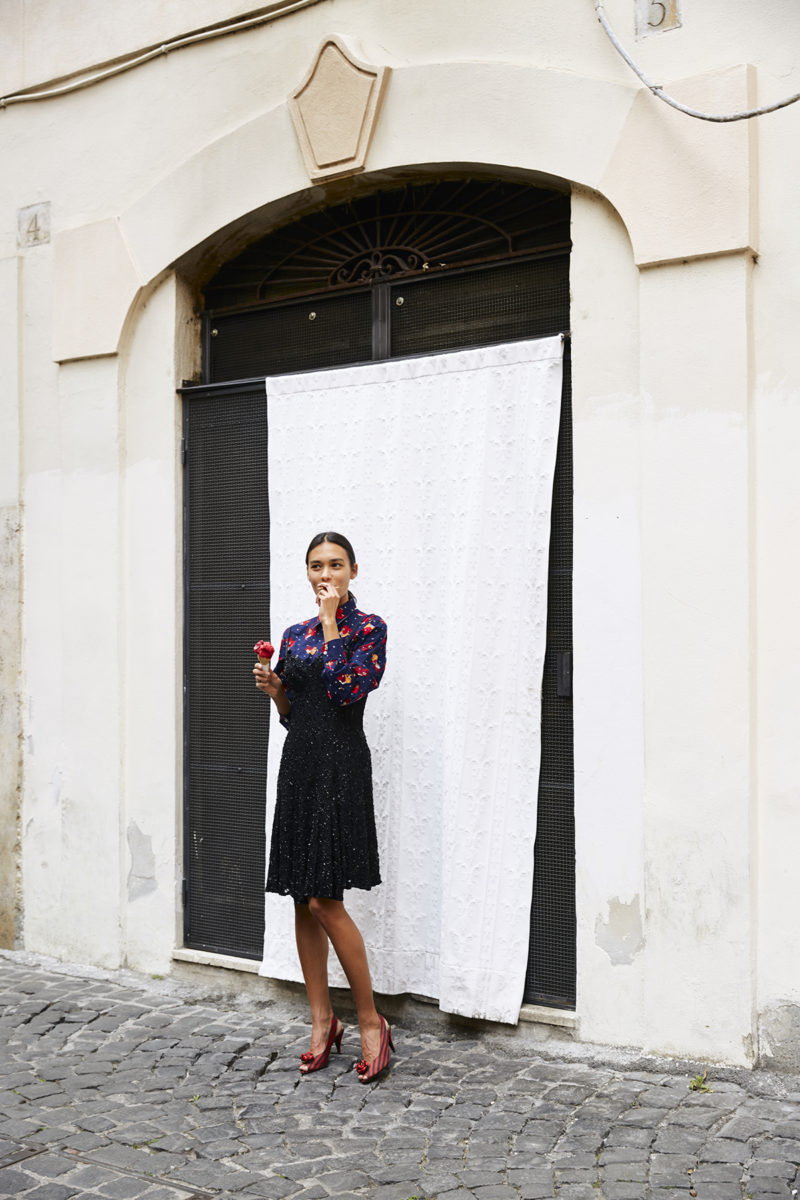 Rome is good at being its own set: This white textured sheet was already in place. Clothing from King Size Vintage.

In the recent past, where government has failed to protect other aspects of the city’s environs, Italy’s powerhouse fashion industry has often stepped in. In the late 2000s, the city struggled to secure the funds to restore a crumbling Colosseum, so luxury shoemaker Tod’s footed the bill for its renovation. And when the Trevi Fountain desperately needed a refresh, Fendi took on the challenge. In 2018, jewelry brand Bulgari committed to refurbishing Rome’s Largo di Torre Argentina, an archaeological site in the city center with temple and theater ruins that double as a no-kill cat sanctuary.

Back at Blue Goose, I close the curtain around me so that I can try on the Versace dress and a silk leopard midi skirt that caught my eye. I’m feeling drawn to the Italian maximalism of it all—a far cry from my usual dark-neutral uniform. “People shop too much at stores like Zara, H&M, and everyone looks the same,” laments Cerulli, but with secondhand clothes, “every piece has a story. It’s easier to be unique with vintage.”

But the experience goes much deeper than that. 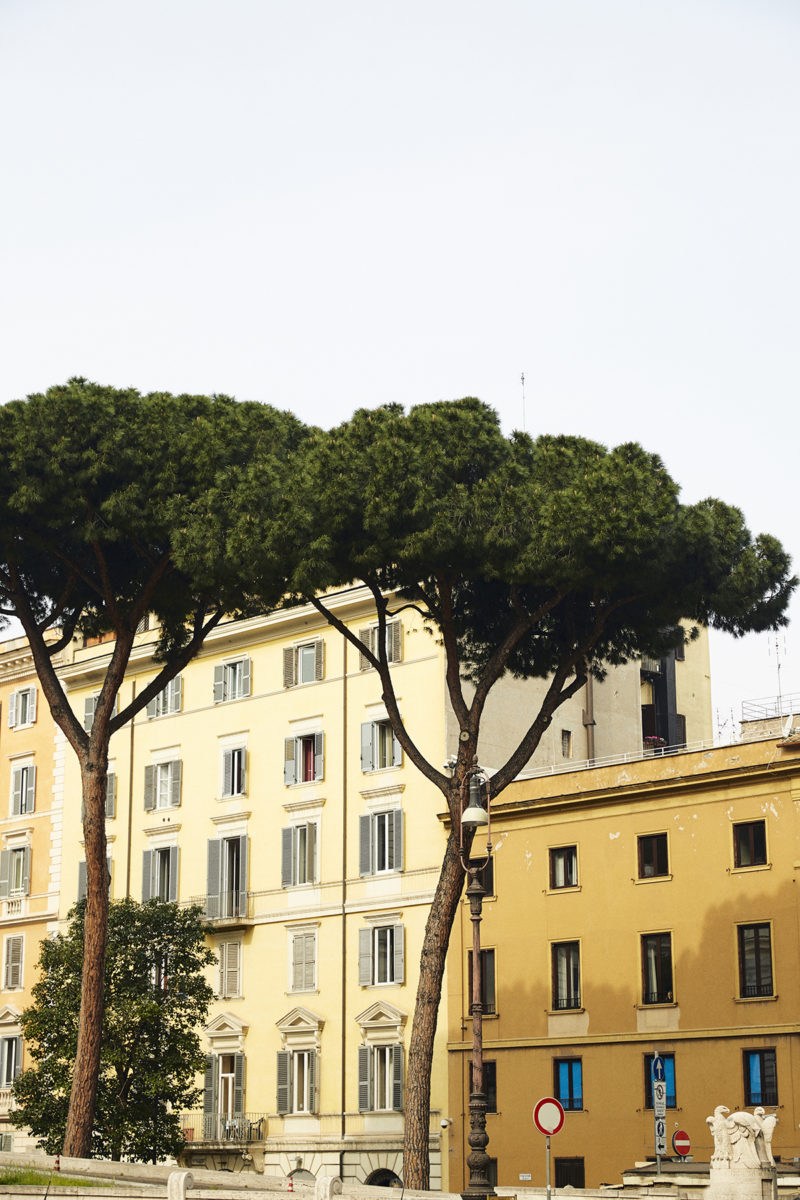 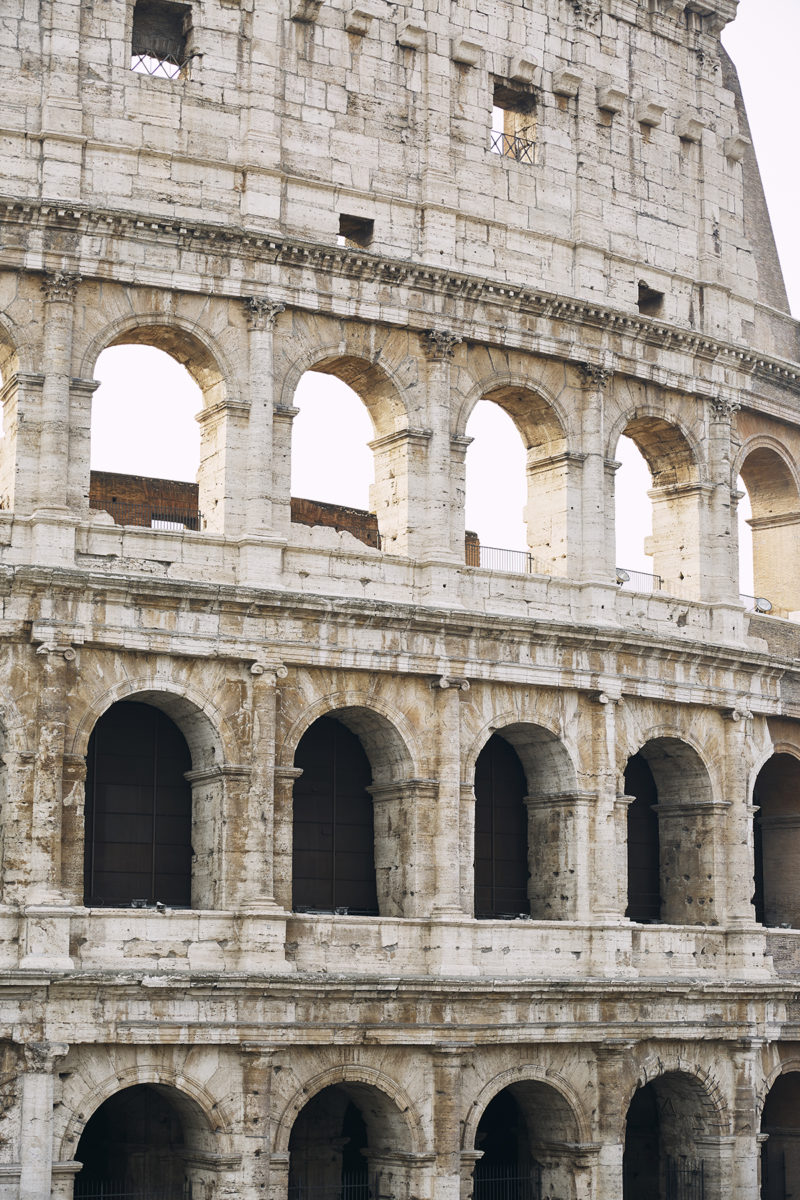 “I don’t go for what sells, I go for what makes people ask questions,” says Ornella Cicchetti, founder of the Mercato Monti, the mothership of Monti’s shopping scene. The shop was founded in 2009, after many stores in the neighborhood closed as a result of the financial crisis. It houses vendors of all stripes, from expert vintage clothing curators to artisan jewelers, on Saturdays and Sundays. Cicchetti selects which vendors she hosts in the market, and the buzz created around her enterprise has reverberated throughout Monti. (“The neighborhood used to be dead on Sundays,” she says.)

“We are not selling a product; we are selling the experience,” Cicchetti continues. “We don’t need any more of this buying. What people are missing is human relationships. When I was a girl, my mom would go to the same boutique and they knew her by name; they knew what she wanted; she would go there and just have a coffee.”

It’s this kind of experience that makes Monti a safe place for shoppers to get out of their comfort zones.

Cicchetti also knows some of the best places to eat and shop like a local in Rome. 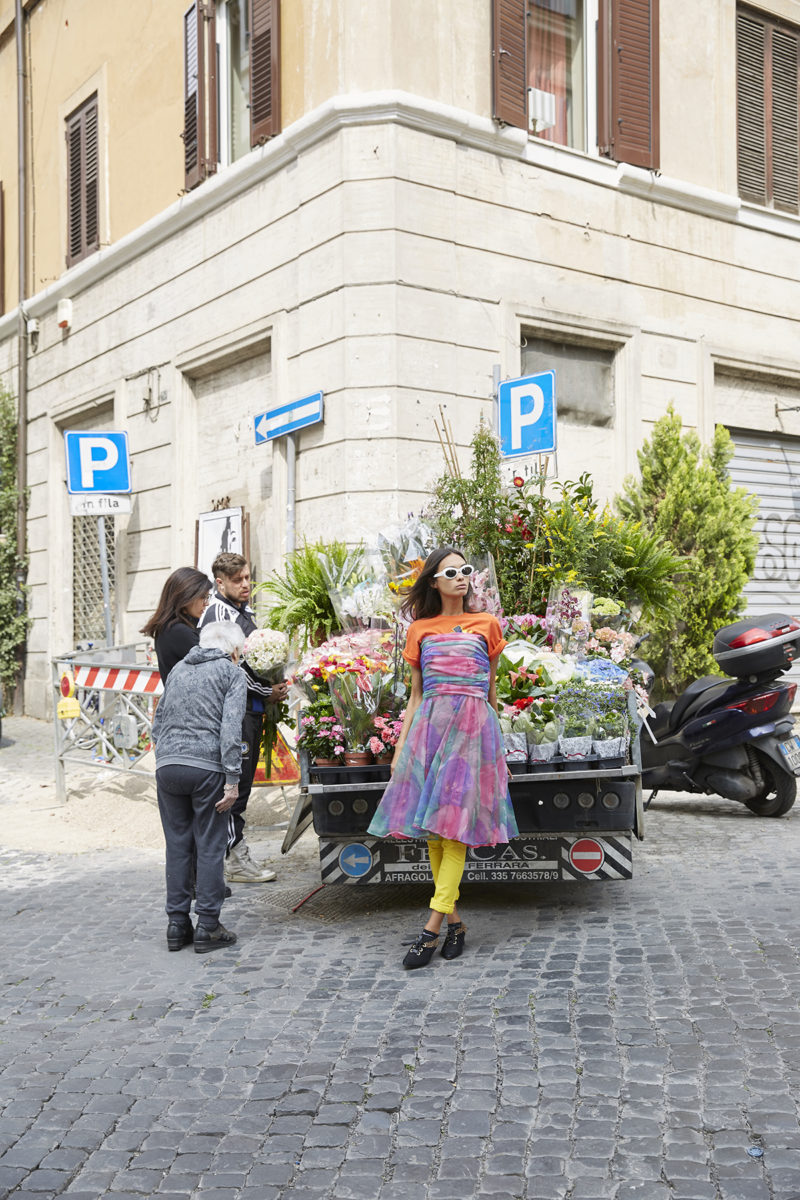 Flower trucks are a staple in the city. Clothing from Pifebo. Pants: Hermès; tee: Adidas

The Versace shift is lined with silk and smooth against my body. It’s fabulous, but it doesn’t quite fit. The skirt is lovely too—I sway the flirty hem with my hips in the mirror and mull it over. I change back into my own clothes and tell the owner that I’m going to think about it. Though everything around me is beautiful and enticing, I am, for once, hesitating to buy on impulse.