The Traveler’s Syllabus for Rome, Italy

At Here Magazine, we believe it’s important to immerse ourselves as deeply as possible when we travel—not only so that we can have the best experience, but so that we can make responsible and informed decisions while we’re abroad. This means more than picking a few top-list restaurants and planning which famous sites to see, and may require a bit of (fun!) homework ahead of the trip.

To help you along, we conducted our own research, spoke to locals on the ground, and compiled the ultimate list of helpful tips to get you ready for a truly immersive experience, from books and movies that contextualize a place’s history to all the need-to-know etiquette.

Welcome to your Syllabus for Rome, Italy.

You or someone you know may have dressed up as a gladiator for Halloween, but what was it actually like to live back in the heyday of Roman civilization? Much of the way we live now is thanks to innovations and cultural crossovers from the highly dynamic, early days of Rome. This read takes you back to relive one glorious day in the average life of an often caricatured piece of history.

When in Rome by Robert Hutchinson (1998)

Vatican City is one of the main tourist attractions in Rome, but if you’re looking to understand the roots of Christianity’s reign on the ancient Empire as well as modern day life, look no further than Hutchinson’s research and musings.

This locally-run magazine (and their corresponding Instagram account) is a great resource for the latest and greatest in the Eternal City, from seasonal events to new restaurant openings. An English-language editorial site for ex-pats and visitors alike, keep an eye on what they’re talking about as you approach your travel dates to Rome. 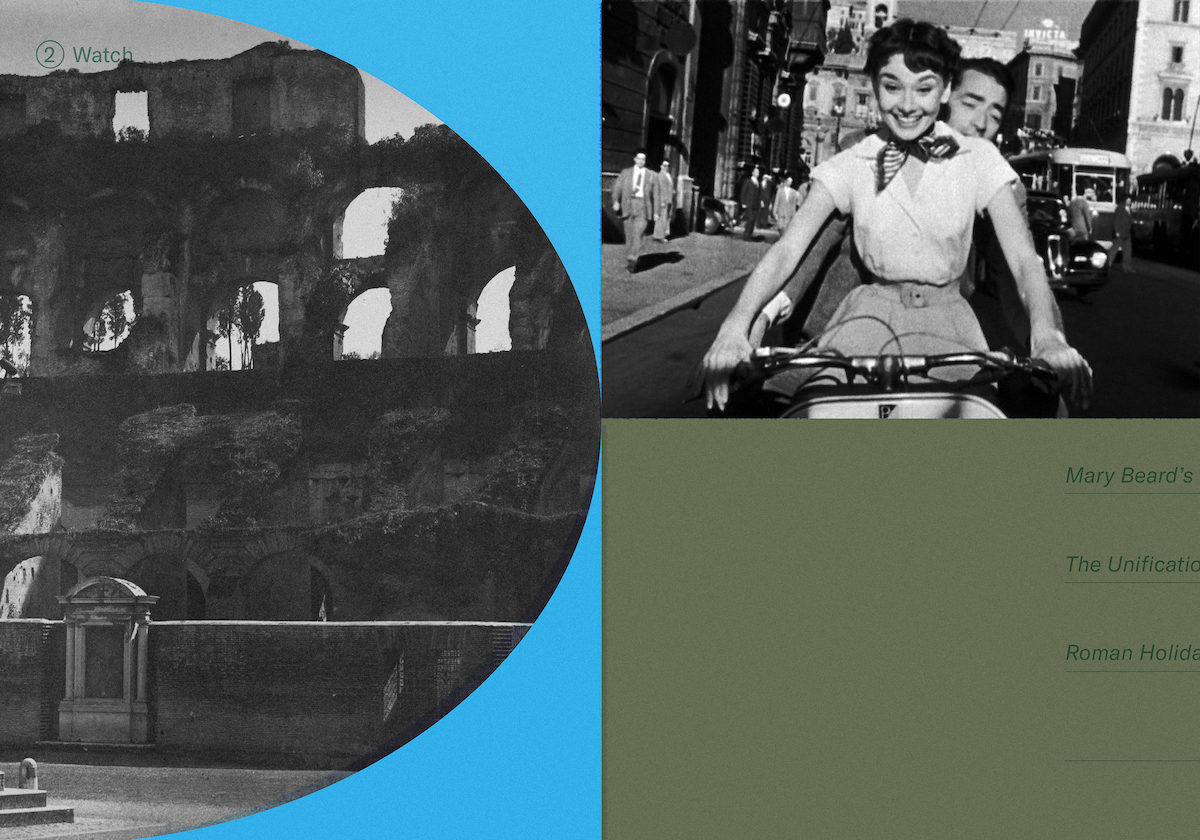 Mary Beard’s Ultimate Rome: Empire Without Limit from the BBC

Historian Mary Beard is a true gift, and her excitement about Roman history is infectious. Beard goes deep on the Empire’s greatest implications—however small they may have seemed at the time—from how the ancient city dealt with its trash to its burial rituals.

The Unification of Italy by History Matters

It may surprise you that Italy is a country younger than the United States (and even younger as a Republic). This 10 minute documentary from History Matters explains a lot of what you need to know on the complex unification of Italy in the late 1800s.

To inspire your romantic side, this classic Hollywood film, where Audrey Hepburn plays a runaway princess who falls for an American journalist played by Gregory Peck, shows the pair discovering the splendors of Rome on the back of Peck’s (quintessential) scooter. 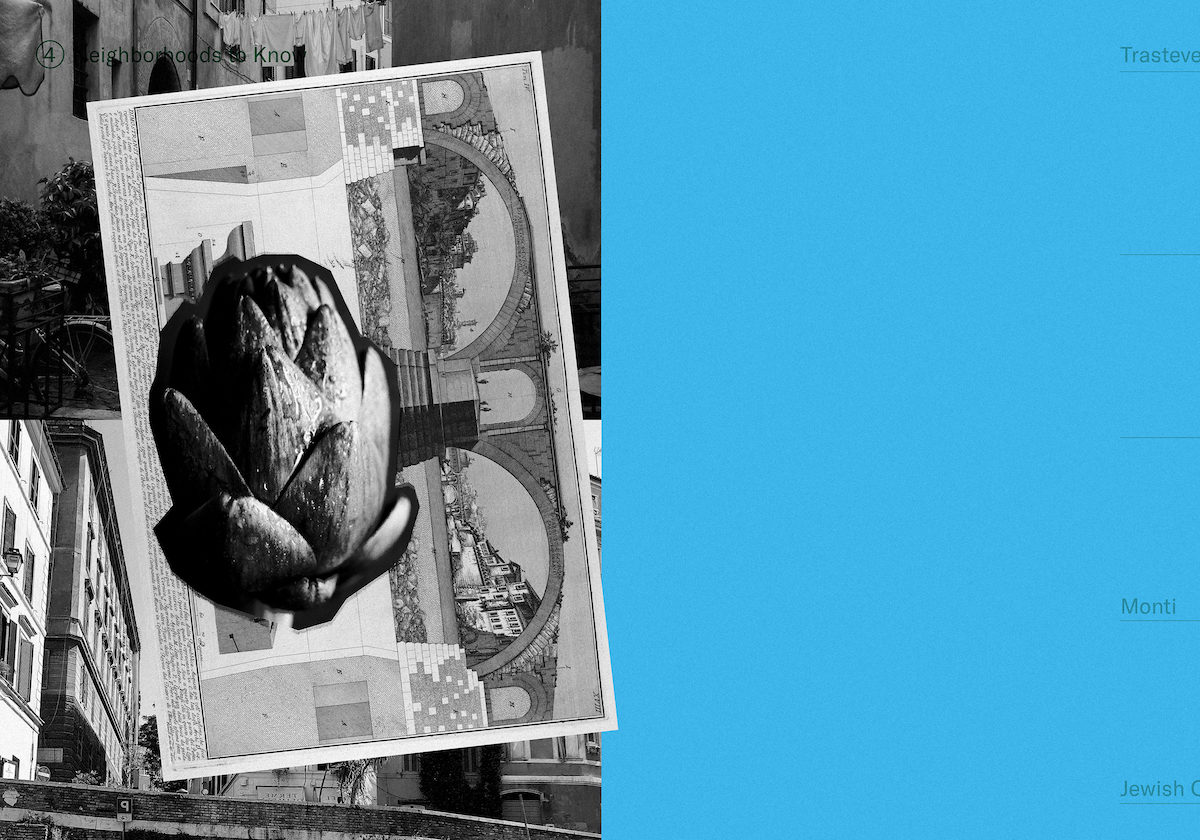 A mix of locals, university students, and Airbnb-ers, Trastevere has great bars, restaurants, and shops that attract a younger crowd that’s looking for more contemporary and sophisticated spots.

Sometimes referred to as the “Brooklyn” of Rome, this cozy neighborhood has the best vintage shopping scene in the city alongside hip trattorias and other quintessential Roman trappings.

A very small but 100% worth-your-time neighborhood. The location used to be home to a popular fish market and backs up to the only island in Rome, Isola Tiberina. Be sure to cross the Pons Fabricius bridge—built in 62 BC and still in its original state. 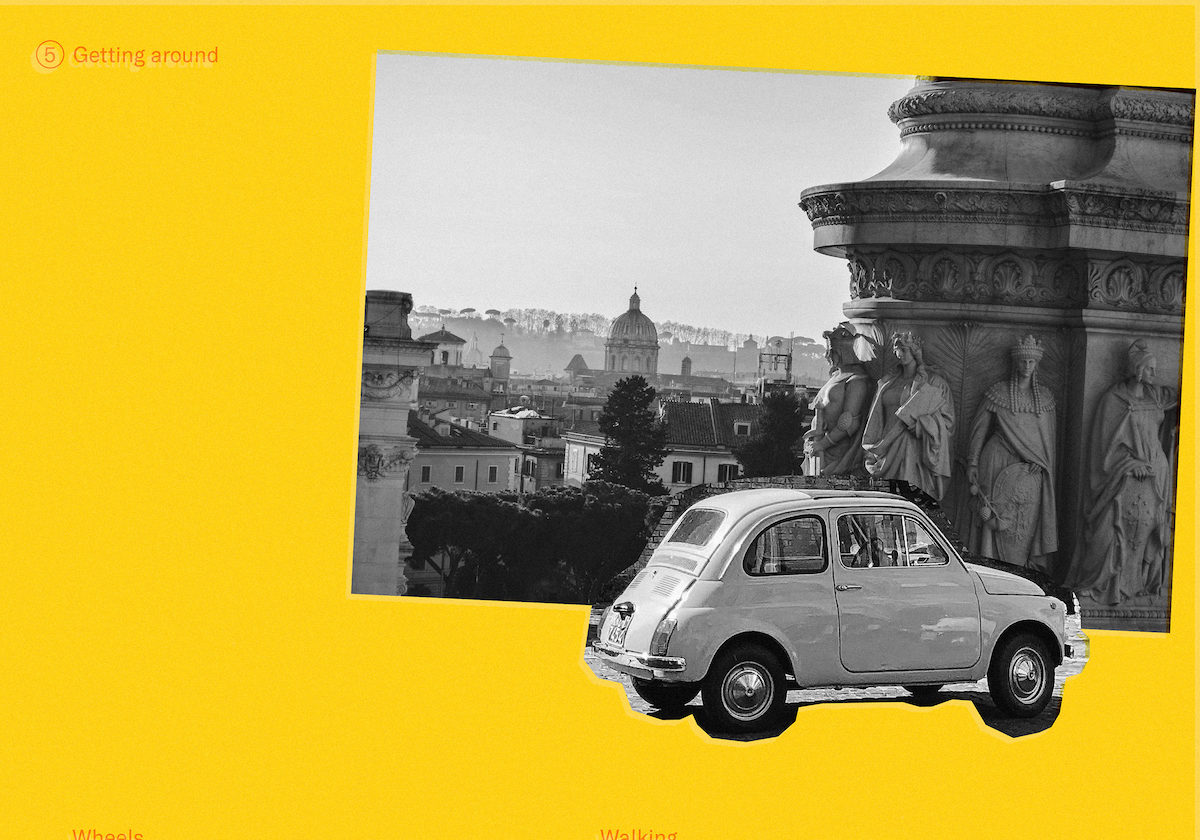 Be sure to always have cash for taxis. It’s a 48 euro, flat-rate fare from Rome–Fiumicino International Airport to central Rome. Uber does exist, but it’s mostly black Mercedes-Benz sprinter vans—only take them as a last resort or for getting to/from the airport with a large group. Otherwise, you very well could get stuck in the small Centro Storico streets and the drivers aren’t as well versed in city directions as taxis drivers.

Also, Rome offers a rare instance in which a hop-on-hop-off bus tour is not to be sniffed at—an affordable way to get quickly around the city that’s less hectic than public transport (and easier to navigate).

Rome is very walkable but it’s not always intuitive. Sidewalks are only prevalent in the main tourist areas and traffic is a doozy. Be hyper-alert in high-trafficked areas and follow the lead of others when crossing the street if possible. 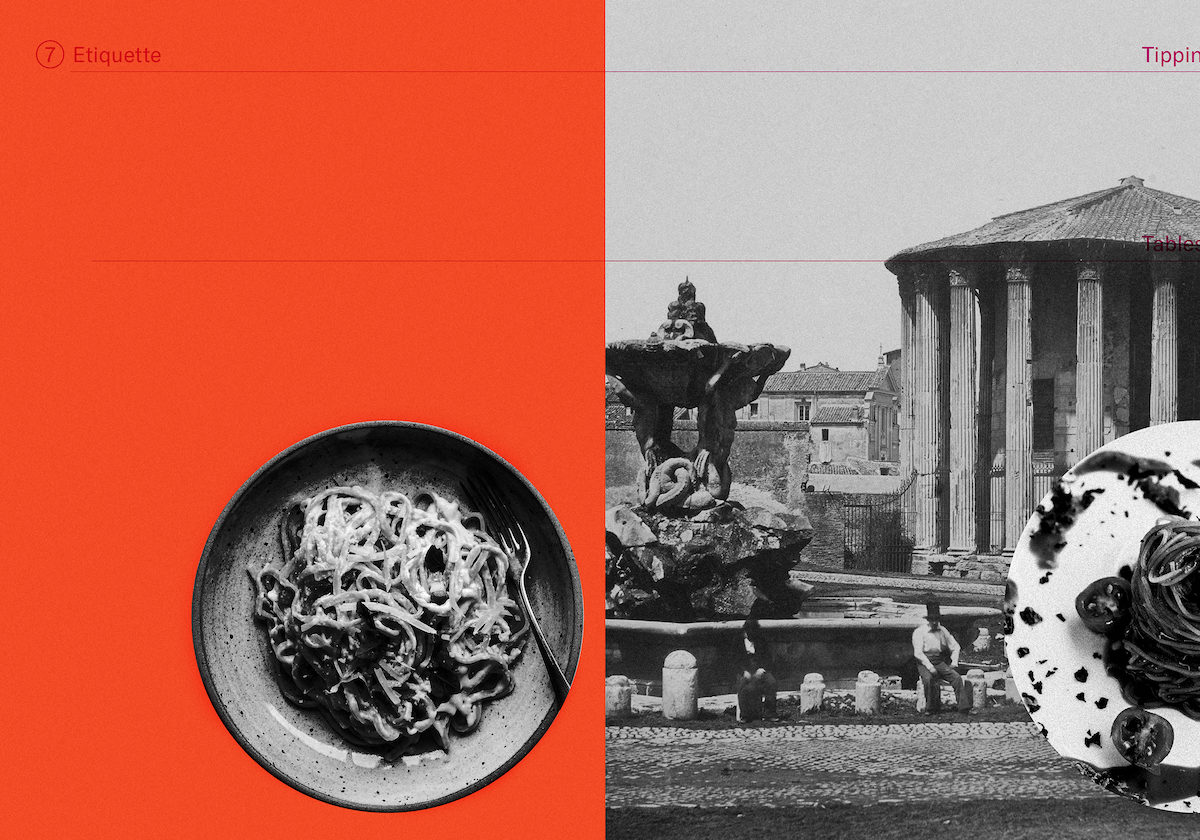 Address Romans with “Salve,” which is a more formal yet casual way of saying “hello.” You only hear this in southern Italy and it commands more respect.

Note: It’s grazie with an eh inflection at the end. Do not say “gratzi” without the eh. Prego means “you are welcome.”

Buongiorno (good morning) lasts until mid-afternoon. It’s okay to switch to buonasera (good evening) around dusk and then buona serata (goodnight) when leaving.

Perfetto means perfect, which is a word you might find yourself reaching for quite often.

You don’t need to tip in Italy. You’re probably already paying a supplement through the servizio (service charge) on your restaurant bill and/or the coperto (cover charge), sometimes both.

Note that Romans will never rush you out of a table. If you book a reservation, you have the table for the night. This means you’ll need to ask for the bill at least four times. Just remember these words: Il conto, per favore? This is how you request the check. 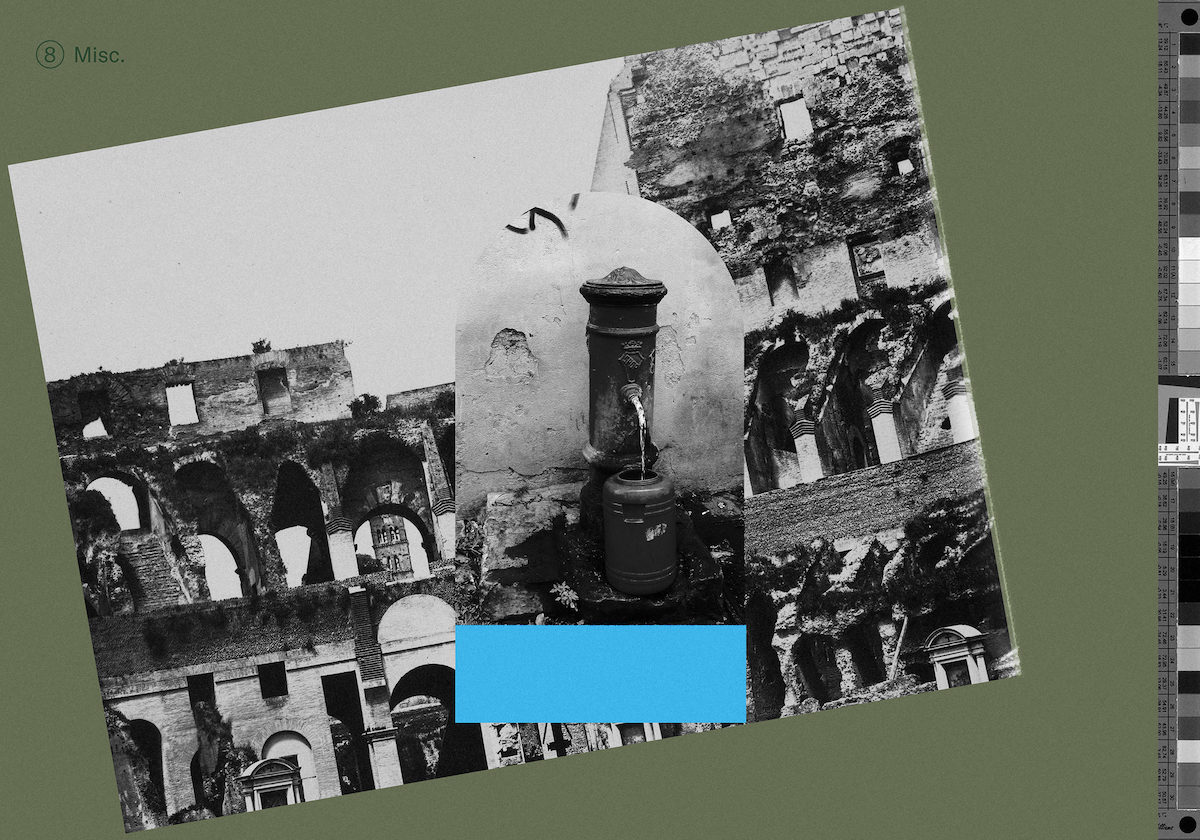 All around Rome there are free drinking fountains called nasone, or fontanella. Their characteristic design leads to some funny tourist foibles—don’t try to lean under the spout to drink. Instead, hold the main spout closed with your hand, and water will sprout from a tiny hole on top of the nose. Much easier.