Retracing Rome: The Eternal City Through My Daughter's Eyes

When Ceil Miller-Bouchet’s daughter decided to study abroad in Rome, the writer was flooded with her own memories from a time when she, too, lived in Italy as a young adult. Instead of surrendering Rome to a distant past, Miller-Bouchet hopped on a plane to experience the ancient city differently—this time, through her daughter’s eyes. In Here’s ninth issue, the writer and mother thought back on her own beloved memories of Rome and opened her heart to discover the places where her child, too, fell in love with the Eternal City.

Before my daughter left for her junior year semester in Rome, I pulled out my rusty Bialetti, bought a package of Lavazza coffee, and showed her how to make true Italian espresso on the stovetop gas burner, just as I had learned when I lived in Italy 30 years earlier. “When the burbling starts, it’s almost ready,” I explained, flipping open the lid until the percolating stopped. “And it tastes better if you stir the coffee before pouring.” I felt my daughter observing carefully. We practiced a couple of times over the next few weeks. When my husband and I dropped her off at O’Hare, gigantic suitcase in tow, my tea-drinking girl had become a pretty good home barista.

There is no way to prepare for the moment when you realize your child is an adult. That transition, which happens separately from the tumultuous adolescent years, is not marked by the purchase of new shoes, but rather by the recognition that your child is leaving, never to fully return. When we waved our last, tippy-toed goodbyes before Annie disappeared behind security, I felt a vast and unexpected emptiness.

This isn’t to say that I wasn’t excited for our daughter when she decided to study in Rome. After all, she was an art history major. But my heart ached from the bittersweet passage of time—the realization that my Italian adventures were in the past, and hers were just beginning. This, coupled with potent memories of the most transformative year of my life—my junior year abroad, when I met my French husband-to-be in Paris—plunged my soul into meditation on the elasticity of time and experience, and how a child is the fulcrum of a parent’s past, present, and future. My Italy was a village at the foot of the Alps, where my husband’s job had taken us as newlyweds. Hers would be the cafés and cobblestone sidewalks of the Eternal City.

My heart ached from the bittersweet passage of time.

For the next six months, I restrained myself from checking in too frequently. I wanted Annie to experience her own Italy—and her own junior semester abroad—free of my memories. But through her posts to our family Snapchat group, I rejoiced in her discoveries. Somewhere along the line, we began planning a mother-daughter Roman Holiday, at the end of her semester.

Travel is the alchemy that has always spirited me from one life stage to the next; just booking a plane ticket makes me zippier than an ice-cold martini. Despite three connecting flights to Rome, I hadn’t felt such travel-induced euphoria since I quit my post-college job to join my future husband in Paris. Gathering my daughter’s petite frame into my arms at the end of the long journey felt like coming home. This time, though, she was welcoming me.

Up early that first morning, I plunked the Bialetti on our rental studio’s rickety stovetop. The churn of my memories melted away as I gazed at my sleeping daughter’s profile in the milky Roman dawn. When the lush aroma of Lavazza woke her, we sipped our espressos with elbows propped on the fifth-floor windowsill. We could almost touch the faded bricks of Santa Maria in Campitelli across the alley. “Momma, did you know you can tell the age of churches here from the size of their bricks?” she asked. No, I didn’t. But I did know I couldn’t wait to discover her Rome. Seen through my daughter’s eyes, rivers of memories merged with the here and now. There was still so much to learn.

Travel is the alchemy that has always spirited me from one life stage to the next.

Though we had both toured the Vatican, seen the Colosseum, and tossed a coin in Trevi Fountain, for us, real Roman dolce vita meant steering clear of the usual tourist sights in favor of under-the-radar places Annie wanted to share with me—largely within and around the maze of cobblestoned streets that protrudes like a thumb into the Tiber River, across from Saint Peter’s Basilica.

First on our list? Cats, with a side of culture. Except for a few other tourists and scores of lounging kitties sunning themselves, we had the Roman ruins of Largo di Torre Argentina to ourselves the first morning. Annie explained that the ancient Romans revered cats as sacred symbols of liberty, as well as mousers who kept the temples free of vermin. Today, stray cats are protected by law and live among many of the ruins. “The cat sanctuary is down here,” she said, pointing toward a door at the bottom of a staircase, well below street level, that opened onto the underground shelter.  “And Julius Caesar was murdered over there,” she added, motioning toward the other end of the fenced-off field of temple ruins, which were discovered during urban renewal in 1927. Since the volunteer-run sanctuary—where you can pet and feed the cats, buy souvenir mugs, and even adopt a kitty—wasn’t open yet, we chose the next best thing. Cappuccino.

[Read all about the new guard of Rome’s restaurant scene.] 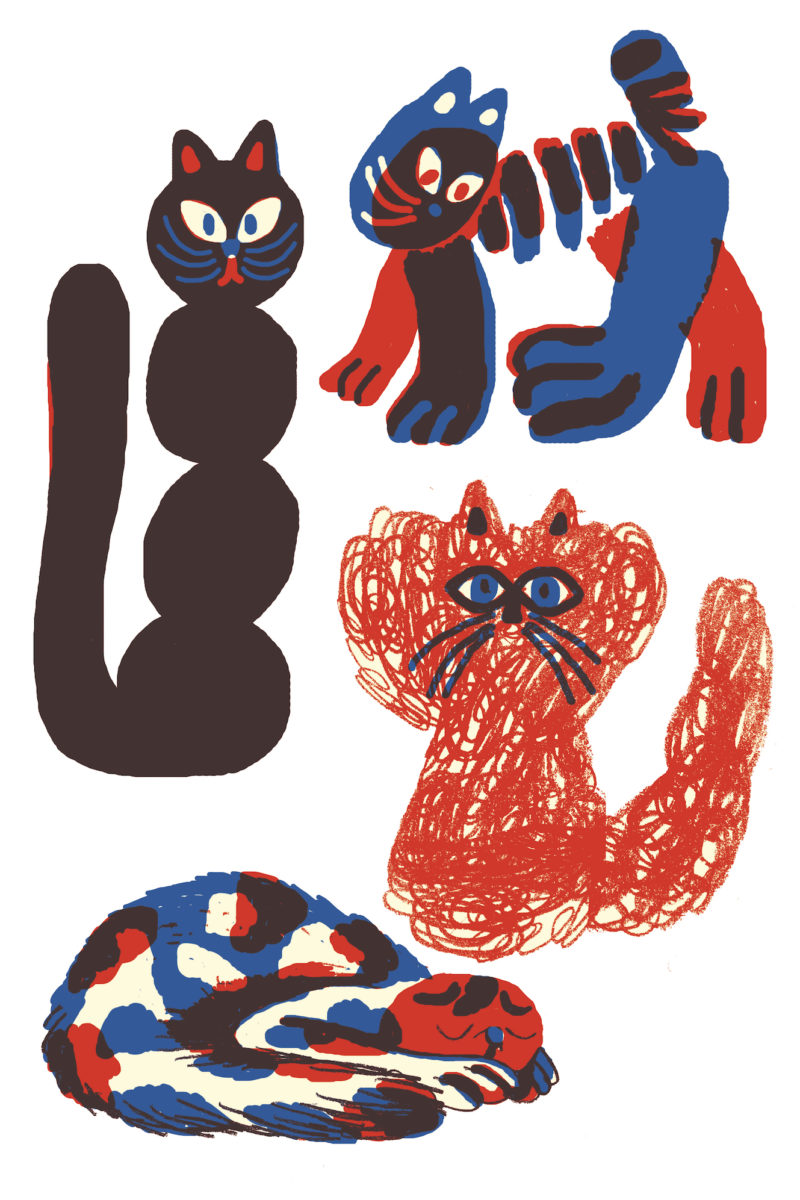 Taking time for cappuccino is a cherished ritual for me. Annie’s favorite spot is an old-school establishment called Caffè Sant’Eustachio, which anchors a cobblestone square fringed by pastel-colored townhouses. Luckily, we arrived before 11 a.m.; we both knew that Italians only take cappuccino for breakfast. And we were not trying to be tourists. The menu featured a black-and-white photo of bar patrons, dated 1952. Inside, except for the corner display of house-roasted coffee, signature yellow espresso cups, and “In caffe veritas” cloth totes, it seemed as if nothing had changed since that photo was taken. After choosing a cherry crostata from the pastry case, we settled outside in the sunshine, amid the morning bustle of delivery trucks and tourists heading around the corner to the Pantheon. Thankfully, there was no latte art on our cappuccino.

We met Annie’s friends for lunch at another unpretentious throwback, Bar Caffè Perù, on a narrow pedestrian lane in the Centro Storico. With red-checked tablecloths and handwritten menus, it was as classic as Sophia Loren on a Vespa. Our waiter, Massimo, whose broad belly was encased in a black apron, told me that he and his brother had worked there for 32 years. “This is a family place,” he said. The girls ordered their student standby—spaghetti al’ limone—but I gorged myself on the lunch special: polenta with sausage and spare ribs, washed down with a glass of local Syrah. It was a magical meal. As I waddled out, Massimo advised me to “come back on Thursday, for the homemade gnocchi.”

Rivers of memories merged with the here and now.

Every day, we went Caravaggio-spotting. As we wandered from church to church, Annie taught me how the genius artist revolutionized painting during his short life, at the turn of the 17th century. His huge tableaux portray realistic social commentary—like the juxtaposition of clerical wealth and common misery—cloaked in religious allegory. Wealthy patrons commissioned the bad boy’s newfangled chiaroscuro paintings for their family chapels, where many still hang today, free for the viewing. Caravaggio’s first important commission, the dramatic “Calling of Saint Matthew” in the Church of San Luigi dei Francesi, was by far our favorite.

The last evening, we joined Annie’s friends again, this time at their favorite watering hole, Freni e Frizioni, in a former mechanic’s workshop on the border of the vibrant Trastevere neighborhood. I was obsessed by the baroque chandeliers hanging above the bar, in stark contrast with the leather-vested bartenders and vintage newspaper-sized drinks menu featuring colorful characters from graphic novels. From behind the bar, Daniele explained that the cocktails, like my rum-based “Corto Maltese,” are inspired by each bartender’s “passion for the characters,” and that they change the menu and drinks theme every six months. “An Italian cocktail is based on bitter and sweet,” he said when I asked what made Italian cocktails most distinctive, before reminding me that the aperitivo was invented in Italy. Drinks in hand, we headed outside to the terrace overlooking the Tiber River.

Travel would always be our touchstone.

Our mother-daughter obsession with under-touristed places culminated on our final morning in Rome. The wedding cake-like spire rising from Sant’Ivo Chapel, a baroque masterpiece which Annie had studied in class but never seen, was a creamy silhouette against the bluebird December sky. It was Sunday morning, so the heavy doors opening onto the Renaissance-era palace were open for weekly mass. “This is genius,” Annie murmured as we stood, gaping, inside the seventeenth-century chapel’s door. While most baroque churches are riots of gilded curlicues and multicolored marble, this soaring, minimalist, yet intimate space pulsed with geometric forms fashioned from snowy white stone. Our eyes were drawn upward to the cupola by a stream of light flowing down through a hole under the chapel’s spire. The hole (which Annie told me is called a lantern) appeared to be supported by the large marble wings of angels with small cherubic faces. “Those are the badass angels, Momma,” Annie said, giving me a quick rundown on the angelic hierarchy she had studied. “They’re called seraphim.”

Like all mothers, I feel I have failed my daughter in many ways. But there, among the seraphim, the past ceded to the present when Annie slipped her delicately boned hand in mine. That is when I knew we were both ready to spread our wings for the next phase of our journeys—separate journeys which would certainly feature more mother-daughter adventures. Travel would always be our touchstone. Over our final Roman cappuccino, we began planning.