The Food Pilgrimage: I Ate Pasta for Every Meal in Rome and You Can Too

Food Pilgrimages are stories about our personal reasons for traveling far and wide for food, and the things we learn along the way—poorly lit food photography and all.

Prior to embarking on a recent solo work trip to Rome that was sure to be decadent and most certainly carb-filled, an all-too-recurring question was posed to me about my post-travel plans: would I be detoxing after?

In some cases, the question was not posed but assumed. Which cleanse program would I do? How many days would I deprive myself of the world’s greatest culinary gift (carbs)?

I love to eat my veggies—I get a real kick out of crafting a well-balanced diet as much as the next wellness culture-crazed Millennial. But the assumption that I’d need to relieve my body of the “horrors” of pasta consumption, that I was somehow obligated to release the “toxins” generated in my gut from refined grains and buttery, salty sauces got me riled. Detox? It’s not like I was doing heroin!

But I was going to Rome. For the first time. My first time to Italy for that matter. And while I was certainly no pasta virgin, growing up in Central Texas did not afford me much exposure to the best of Italian cuisine. I wanted to immerse myself in one of the world’s most beloved culinary cultures as much as I could on a five-day work trip, and I didn’t want to feel bad about it leading up to, during, or after my excursion.

Defiantly, I made a commitment to eat pasta at every meal possible—I set off on a pasta pilgrimage around Rome—determined to eat all I could of the traditional Roman pasta varieties ( Cacio e Pepe, alla carbonara, all’amatriciana, alla gricia) and beyond.

I’ll tell you this:

There would be trial and error. There would be pasta lapses—I couldn’t not eat pizza (from Emma) and I never made it to an alla gricia dish. But ultimately, when I came back home to New York, I simply resumed my normal eating habits. And I have lived to tell the tale!

Here’s what I learned, what I ate, and how awesome it was. 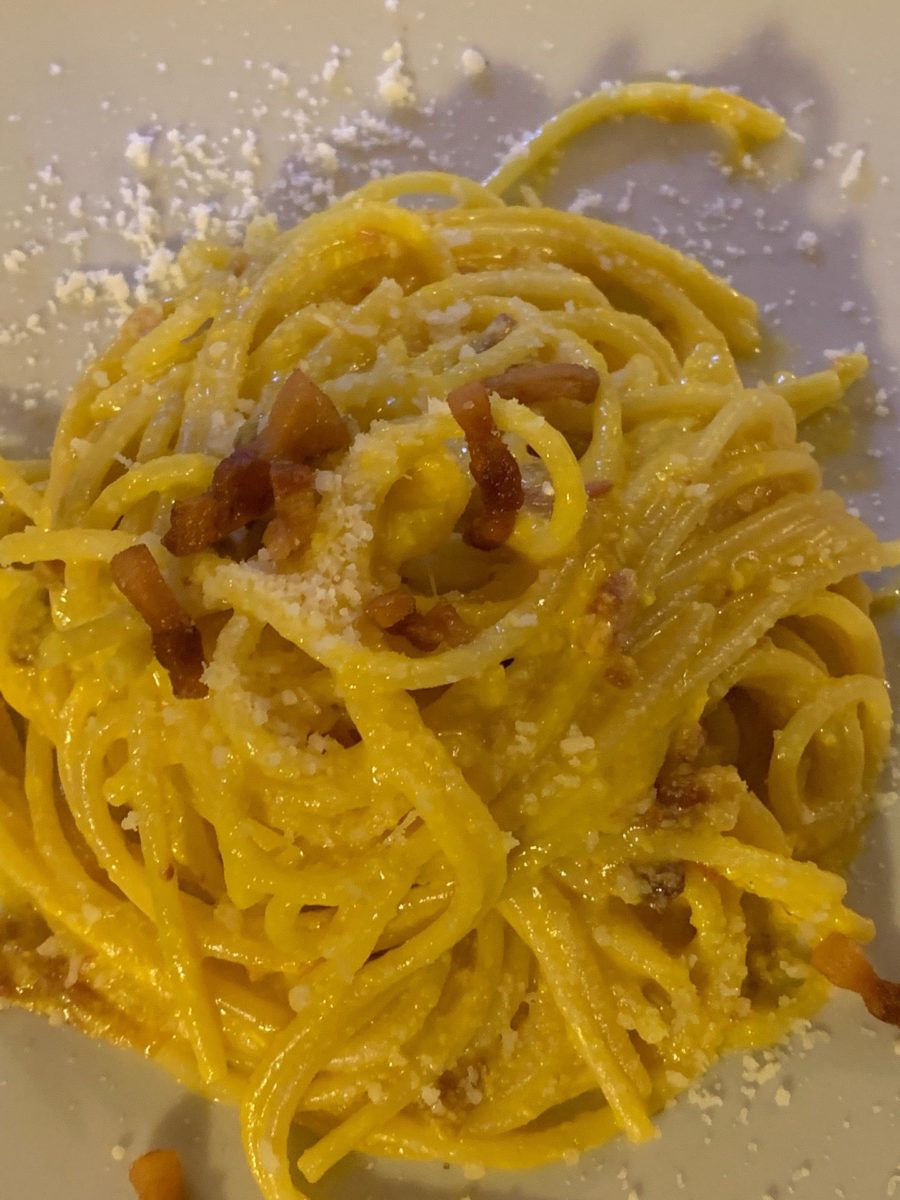 Guess what I had at La Carbonara!

I couldn’t help myself! I had never had alla carbonara before—ever! And here was a place with the dish in its name. The spaghatti alla carbonara here was gooey and salty and delicious, and will probably be the barometer by which I judge all future carbonara dishes in my life. After this first lunch, I knew I was embarking on a worthwhile journey. 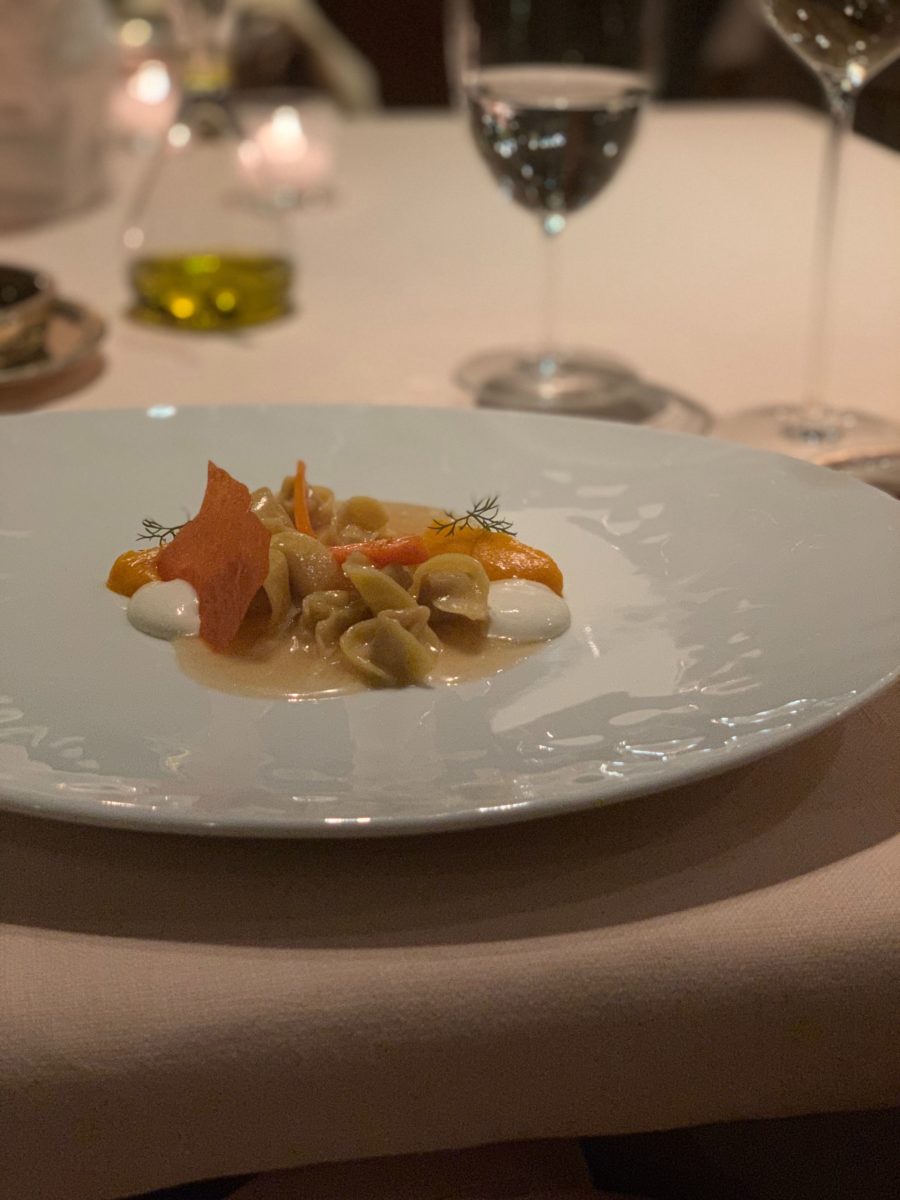 So refined. So delicate. 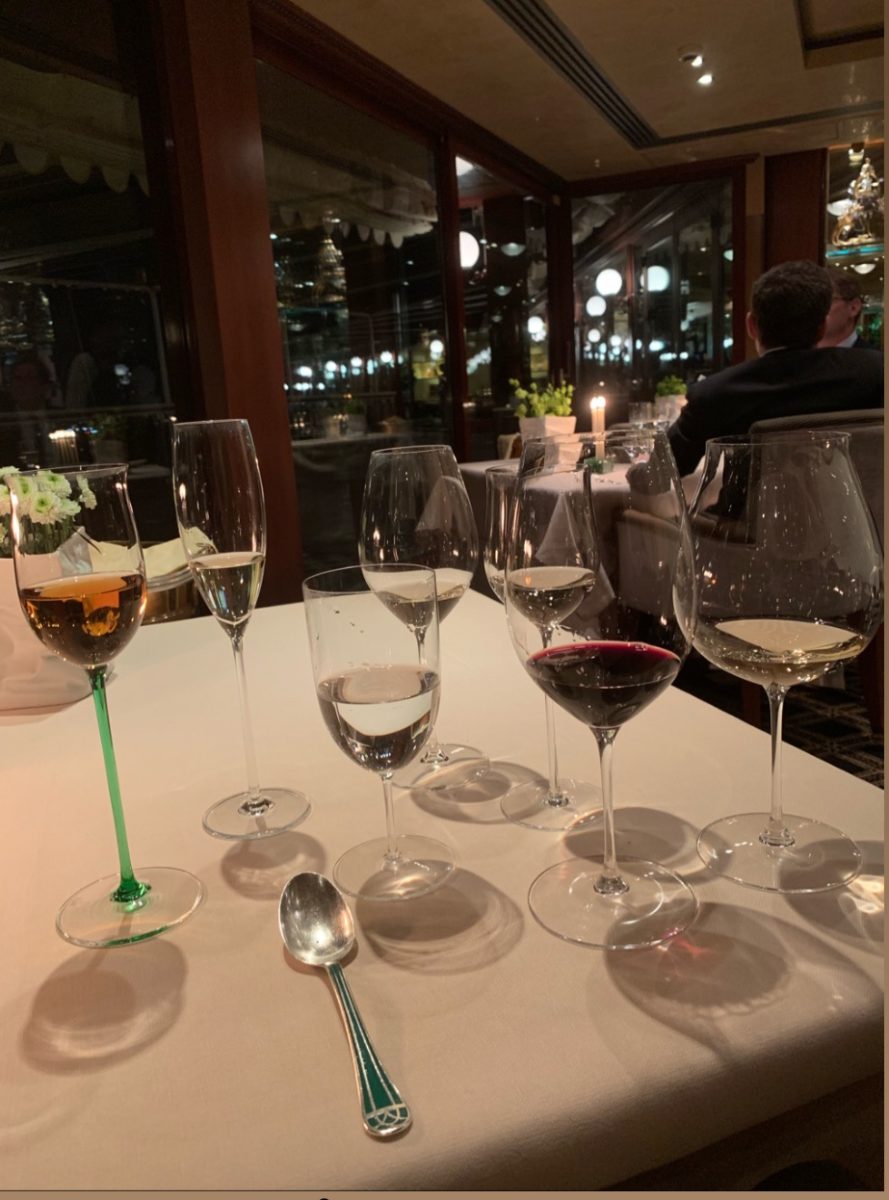 The wine pairing with this tasting menu was... insane.

I went all out on my first night in Rome and did a tasting menu at the city’s only restaurant with three Michelin stars, located at the Rome Cavalieri where I stayed. Pretty much everything I put in my mouth was perfection, but particularly the pillowy soft, slightly gamey rabbit agnolotti stood out. Paired perfectly with red wine and sparkling views of the Eternal City. 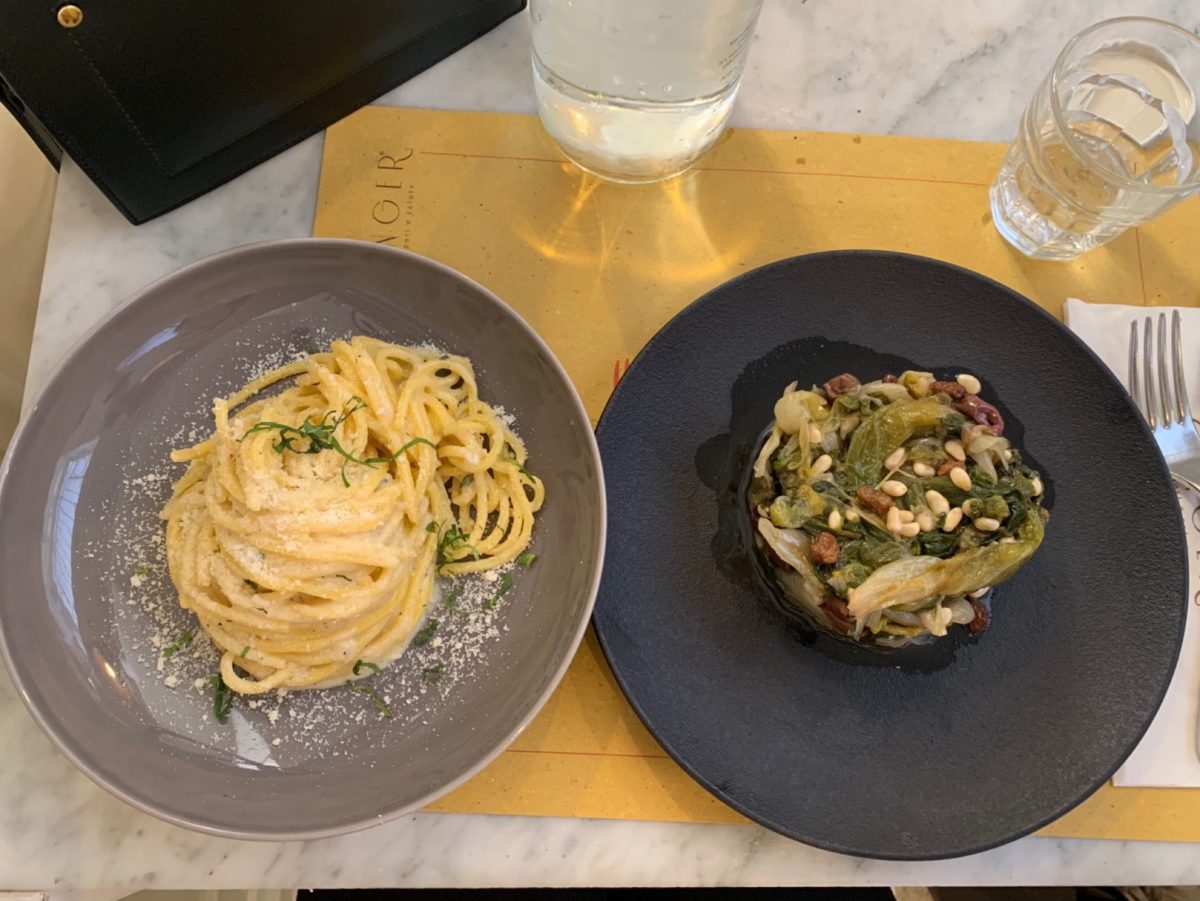 A "light" pasta from Ginger.

This was billed as a good healthy lunch spot, and I wanted to see what the Roman take on healthy lunch pasta might look like. I ordered a variation of Cacio e Pepe—keyword: variation. It had almost no pepper, but did have a few sprigs of mint? This had the effect of perhaps tasting lighter, but it was still, to my delight, full-blown pasta. 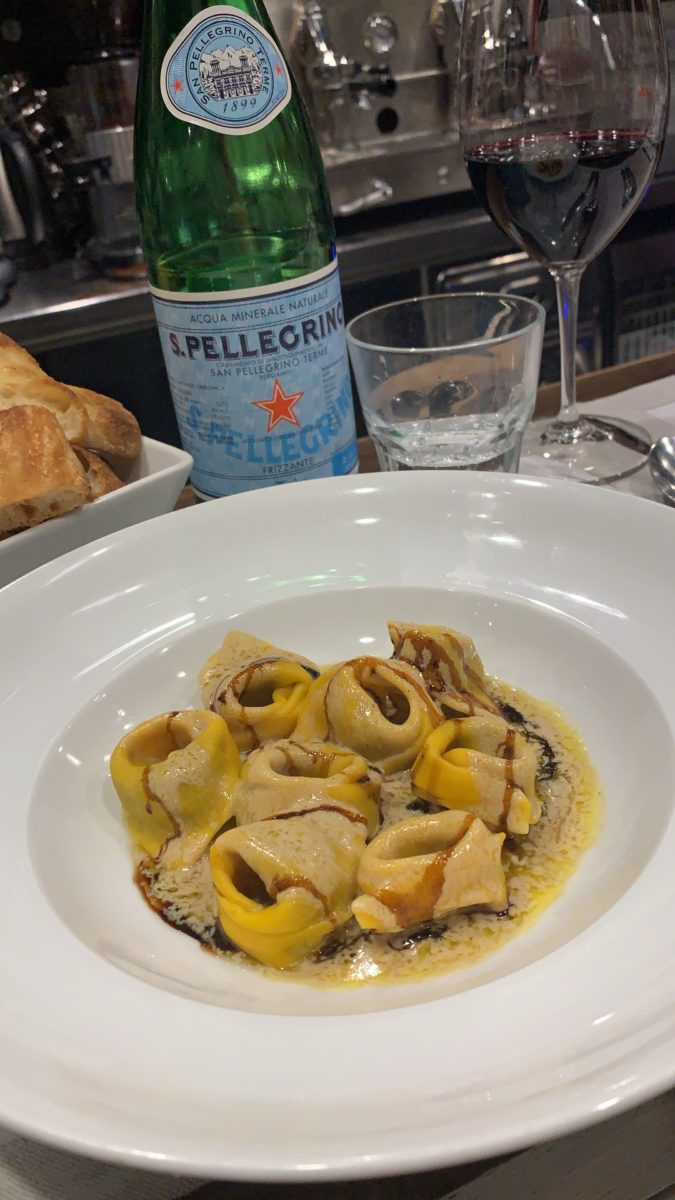 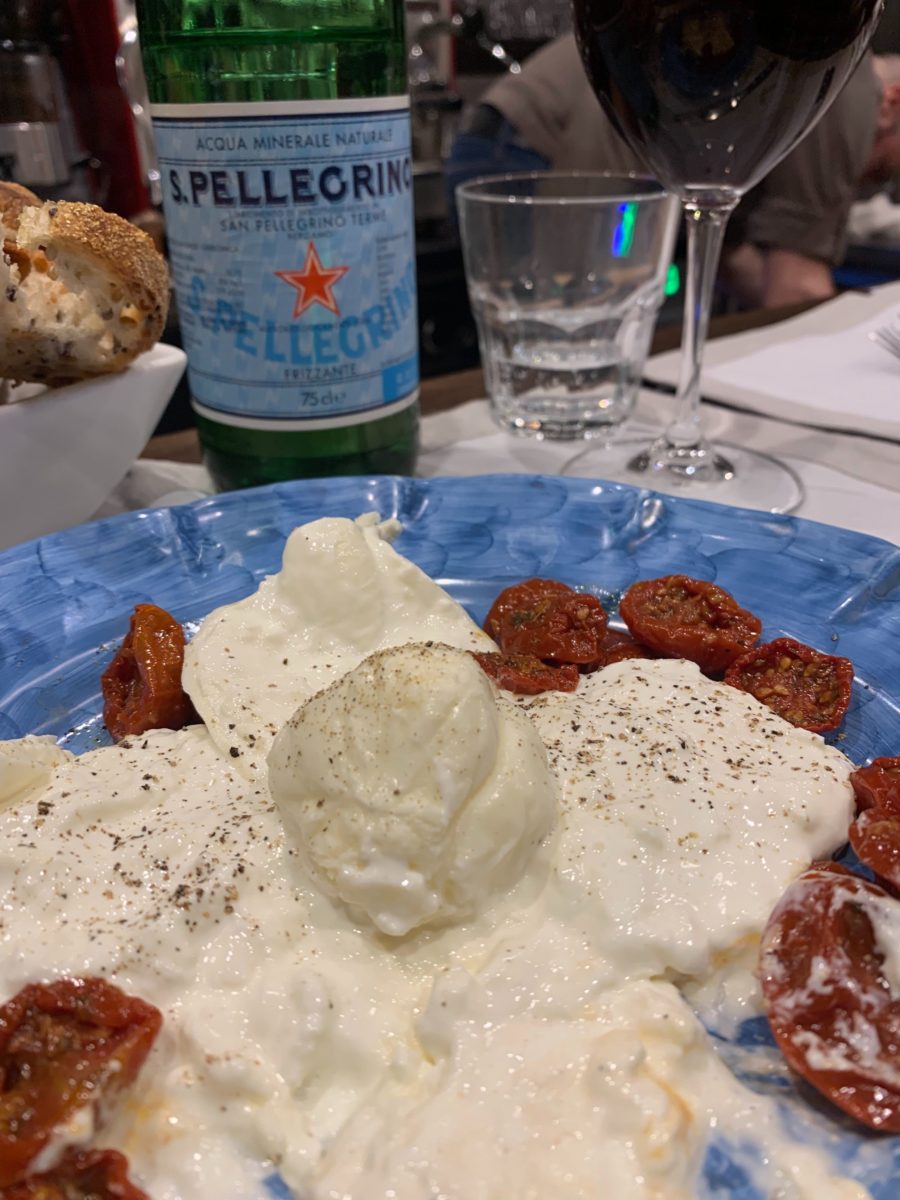 I thought I understood ravioli. I grew up on Chef Boyardee. But this raviolo with Roman oxtail, pecorino cheese, and foie gras sauce with slow-cooked, slightly-spicy figs truly expanded my pasta consciousness for the better. It was so good, I almost forgot to mention I started the meal with burrata. BURRATA. 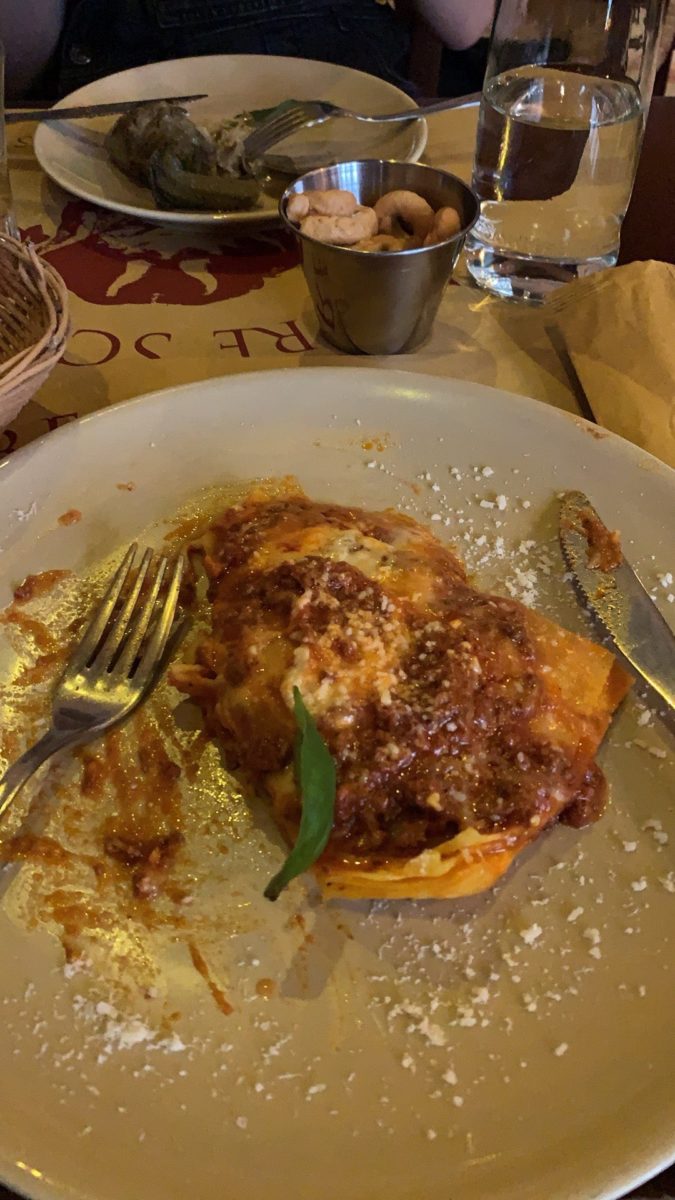 I am actually impressed that I was able to snap a pic mid-devouring.

This very old bottiglieria (wine shop) in the heart of Monti opened in 1895, and is truly something special. I’d had a physically gruesome morning on a photoshoot and by the time I sat down at this rustic eatery my eyes went straight to the lasagna with beef ragu. I devoured it (and a Greek salad) and immediately wanted to wash it down with something delicious. Fortunately, the house motto roughly translates to, “DIE YES, BUT NOT THIRST!” 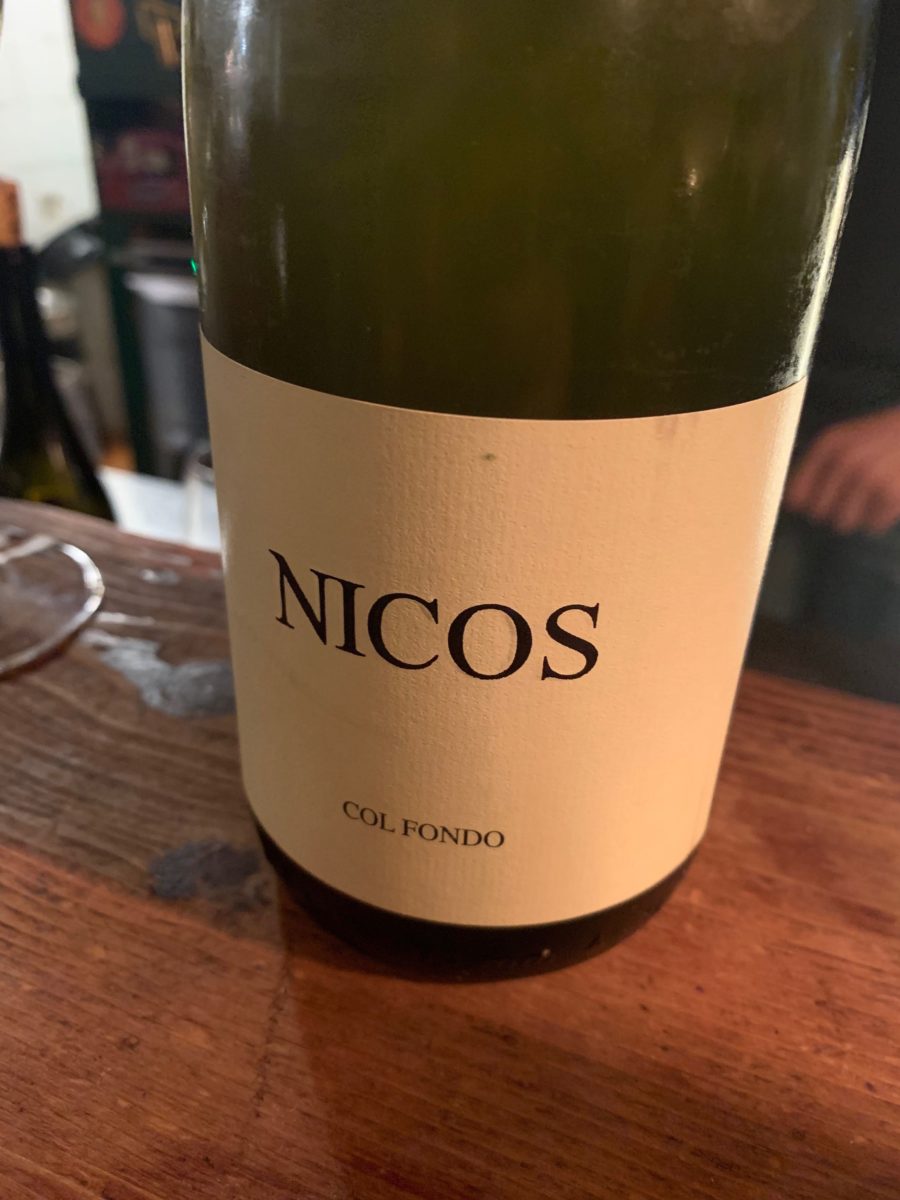 Sadly, the pasta was not the star of the evening. But this naturally made Prosecco-esque wine at Enoteca Il Piccolo was quite memorable.

According to Foursquare, several of my friends had been to this place. It seems to attract American tourists like kitchen flies. I waited in a line to get a seat, and fortunately there was a delightful wine bar across the street that lets you take a glass of naturally produced Prosecco outside as long as you bring it back before you sit. This little wine bar, Enoteca Il Piccolo, was the best discovery of the night. Unfortunately, the rigatoni all’amatriciana tasted like it was made to appease American tourists who don’t know any better, but I was proud to discover that I’d officially become a pasta snob. 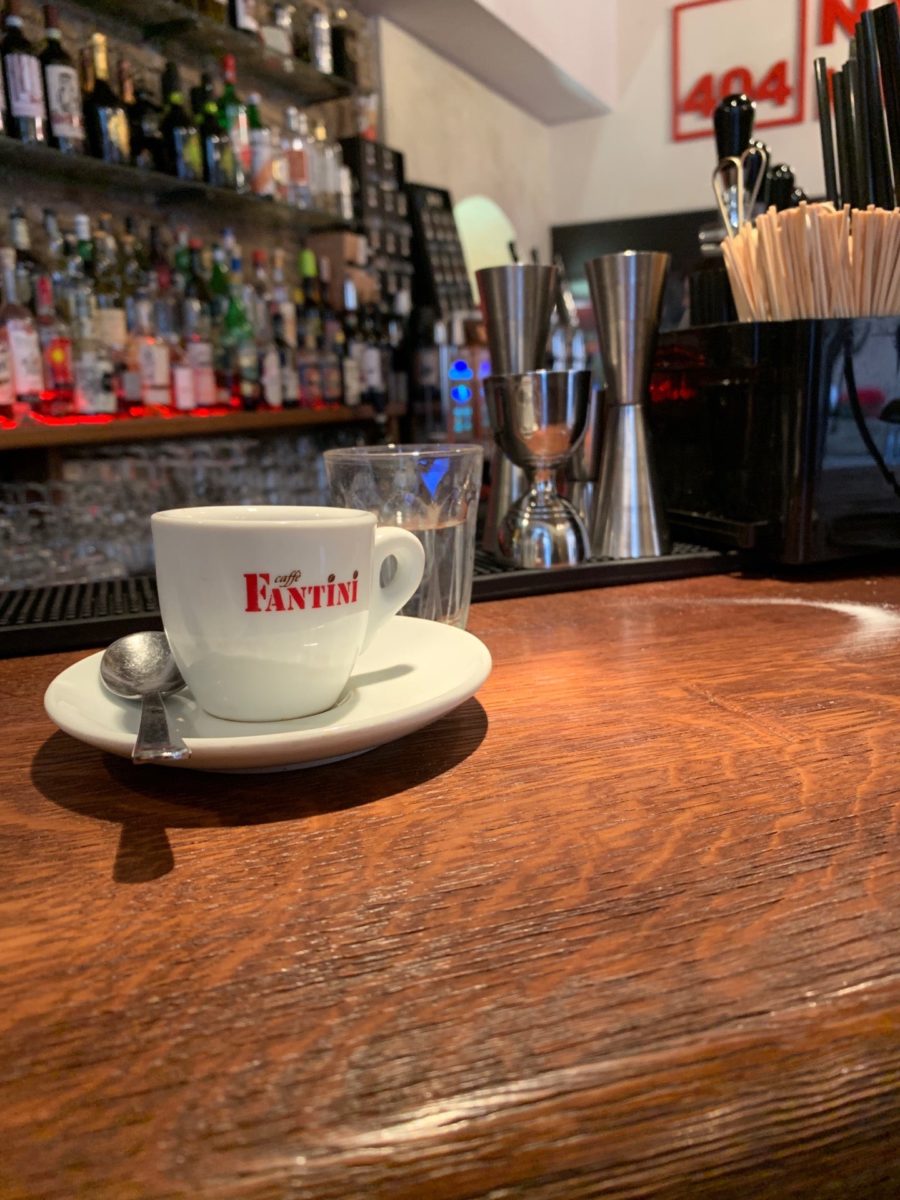 Sorry! I was too busy chatting and enjoying myself to take a picture of pasta!

I stumbled on this (precariously named) place in Trastevere, and the guy sitting next to me at the bar, a chef from Copenhagen—where chefs are required to undergo four years of training—was trying to convince the staff to let him in the back kitchen for a tutorial on how they make such delicious pasta at such an affordable price. I was just in for an afternoon espresso but I was quickly convinced otherwise. By this point, I had determined that spaghetti alla carbonara was my favorite, and I was not disappointed here. 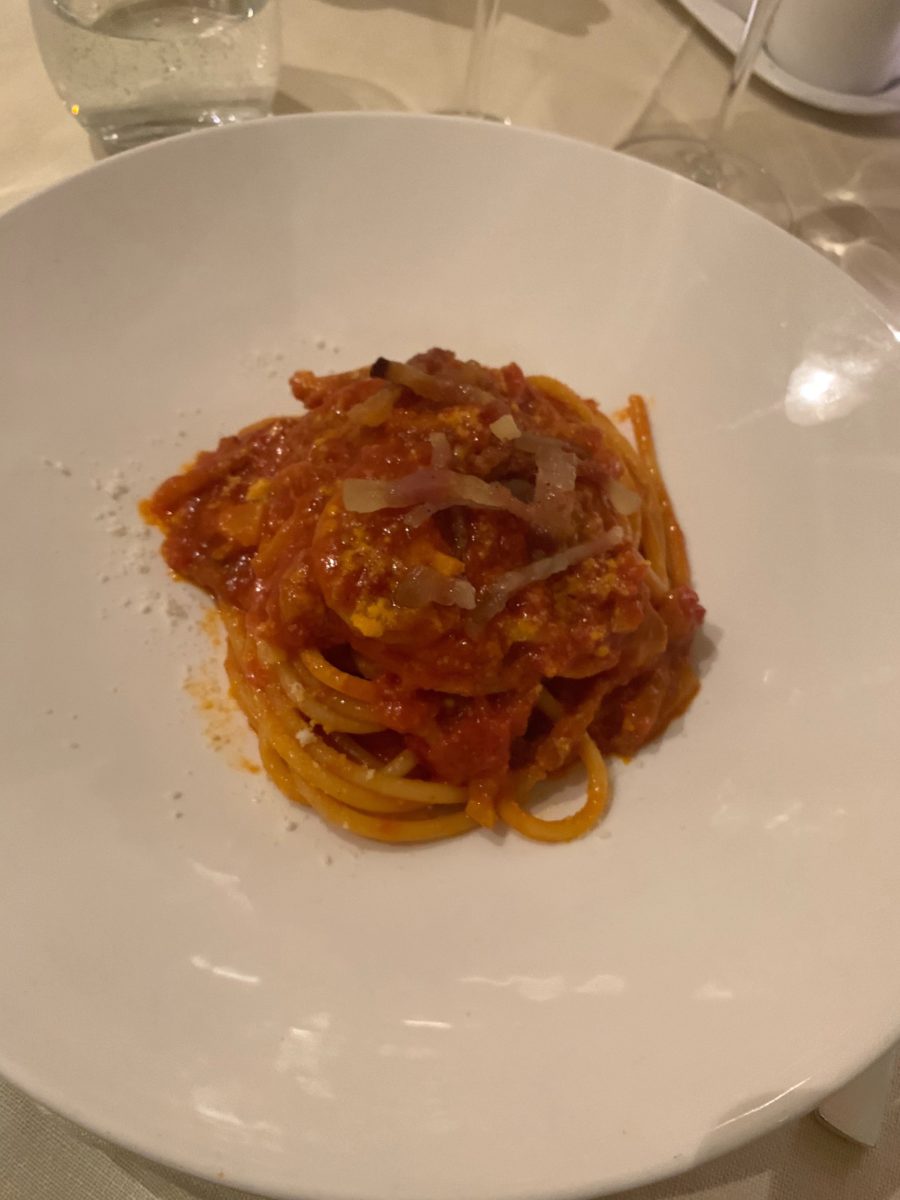 Could you not just slurp it right up?

Carbonara is my favorite, but I love to chase it with a bucatini all’amatriciana for dinner. The salty cured pork! The tomato-y tang! This terraced restaurant at the Rome Cavalieri was perfection. 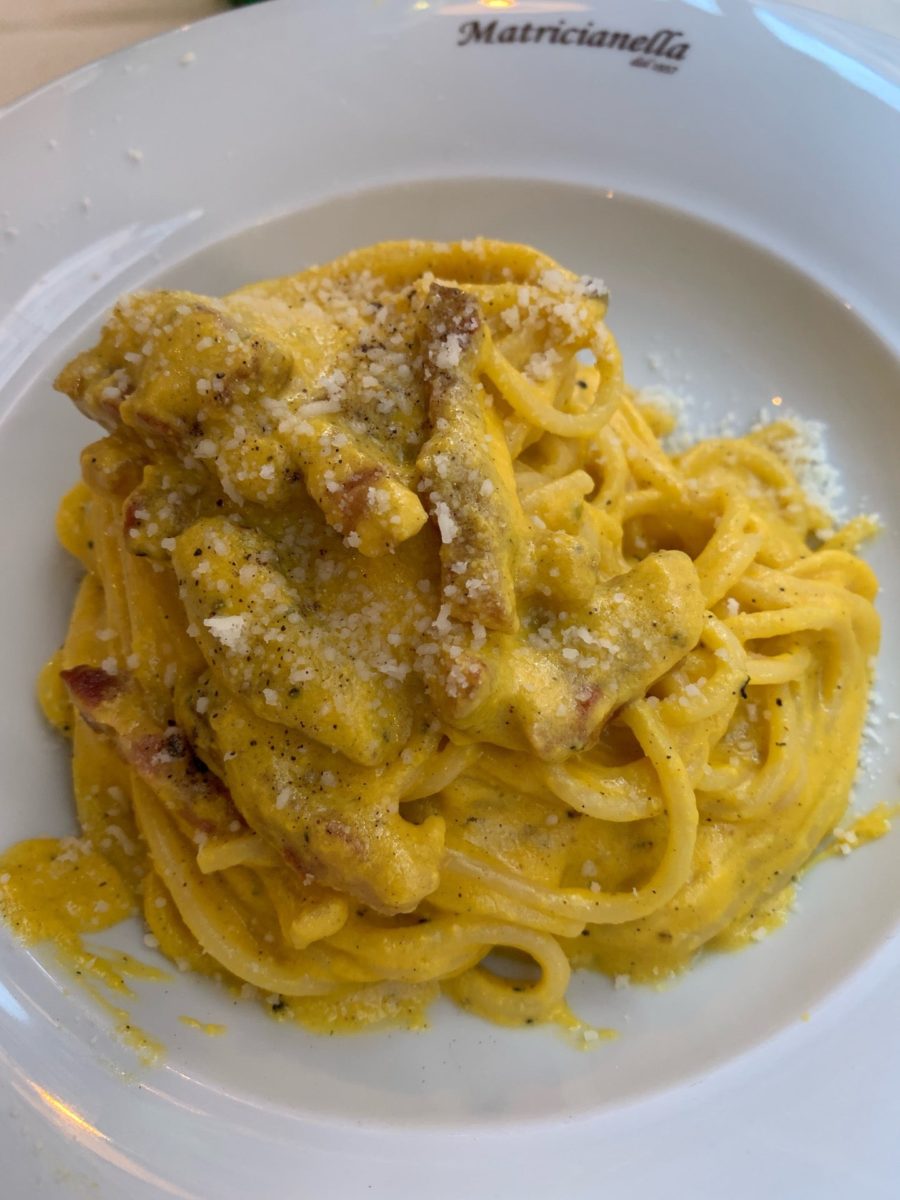 News alert! Pasta is for breakfast! Carbonara is my new bacon, egg, and cheese. A perfect fuel for the day. What a fantastic discovery on my last day in Rome, before the stress of the airport and returning to subpar pasta culture and carb shamers.

Here’s my final takeaway: Pasta in Rome is fresh and perfectly portioned—I didn’t feel like my body was caving in on itself after five days of almost pure pasta consumption. In fact, I felt energized—if thirsty (for wine).