Pro Surfer Quincy Davis shares her jet lag tips, her favorite travel-friendly-bikinis, and a funny story about getting fined $400 on a trip to Australia.

It’s not an exaggeration to say that Quincy Davis grew up in the ocean. The Montauk, New York-native started surfing when she was five years old and was competing everywhere from Florida to California by age 10, landing herself a Volcom sponsorship not long after. Her family owns a house in Rincon, Puerto Rico, and growing up she spent half the year homeschooled there. “When I was little, I lived in the water,” she says.

Now, at age 23, she’s less involved in competitions, but still travels the world free surfing, shooting and filming for her social media accounts, and curating brands for her summer shop in Montauk called Quincy.

Her recent travels have taken her everywhere from Hawaii to Byron Bay, and a lifetime of trip-taking has made her an expert in how to pack and travel. Below, Davis shares her favorite spots in Montauk and Rincon, how she beats jet lag, and the one beauty product she never travels without. 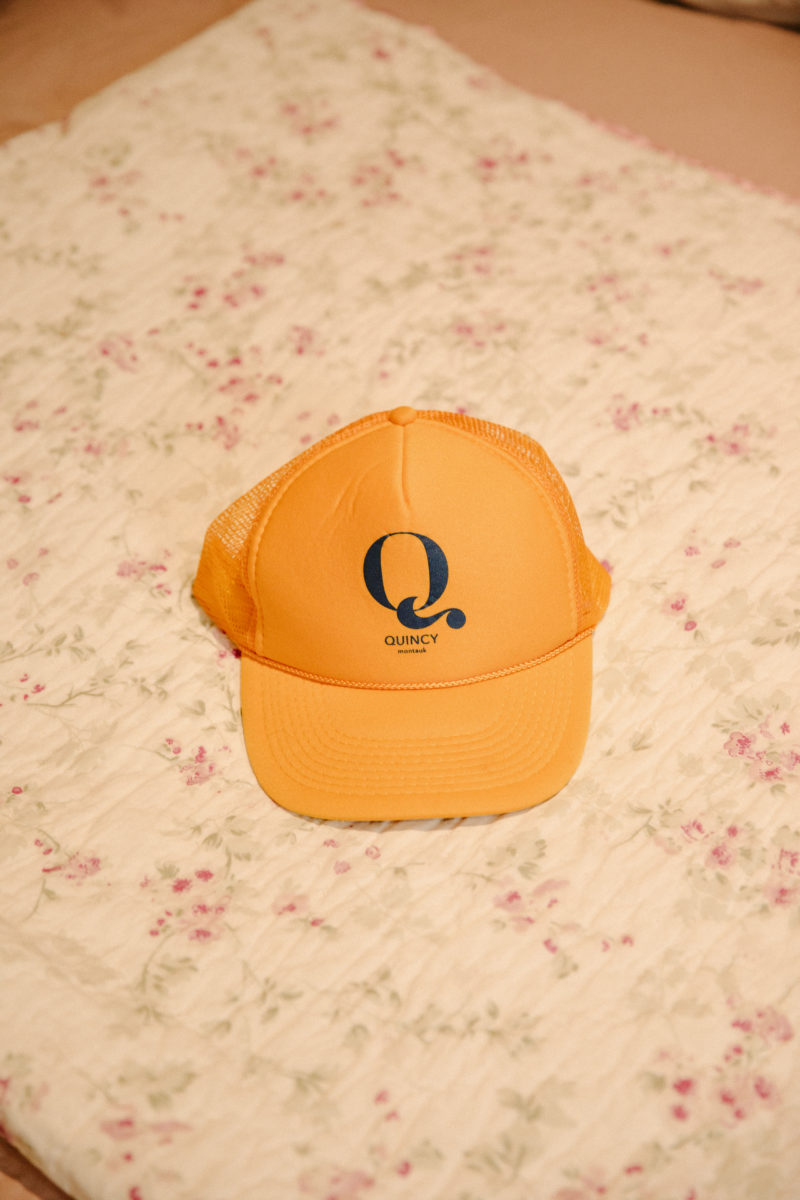 Davis opened her namesake store in Montauk, called Quincy, in the summer of 2018. The logo is a simple "Q." 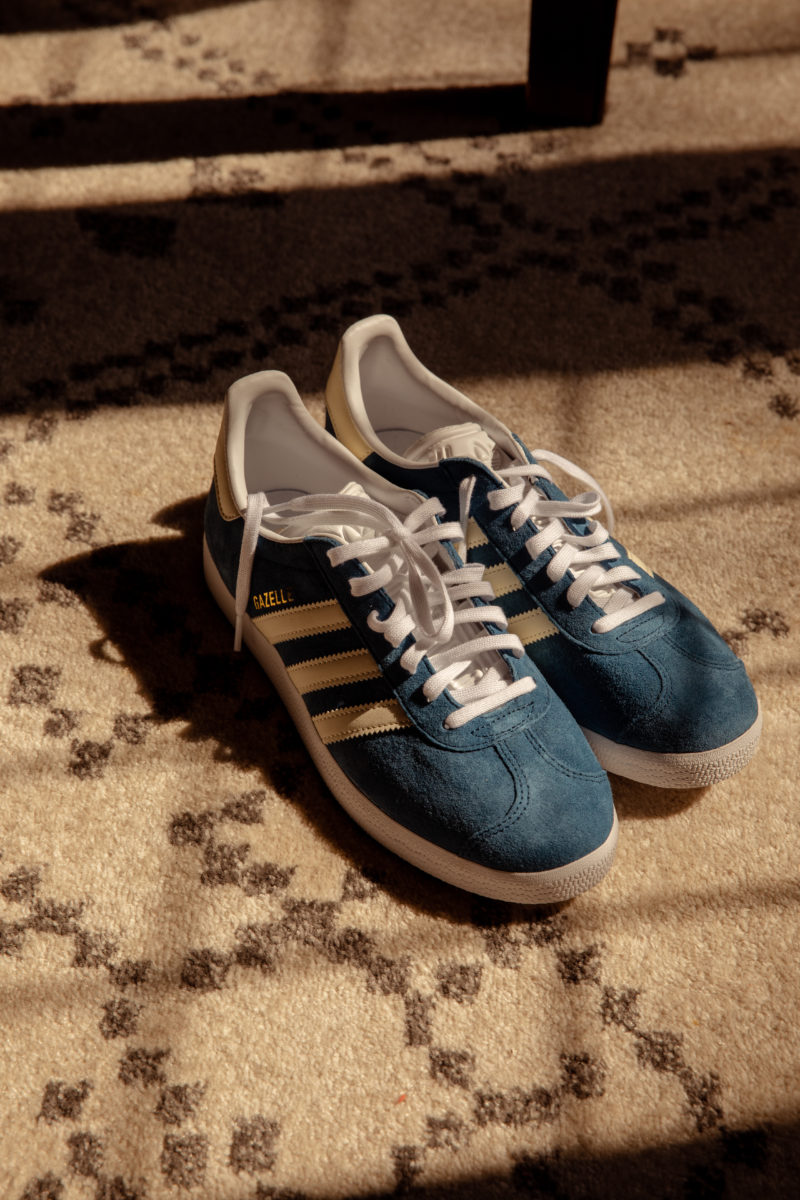 "I always bring a pair of sneakers with me, and usually wear them on the plane. These ones are Adidas." 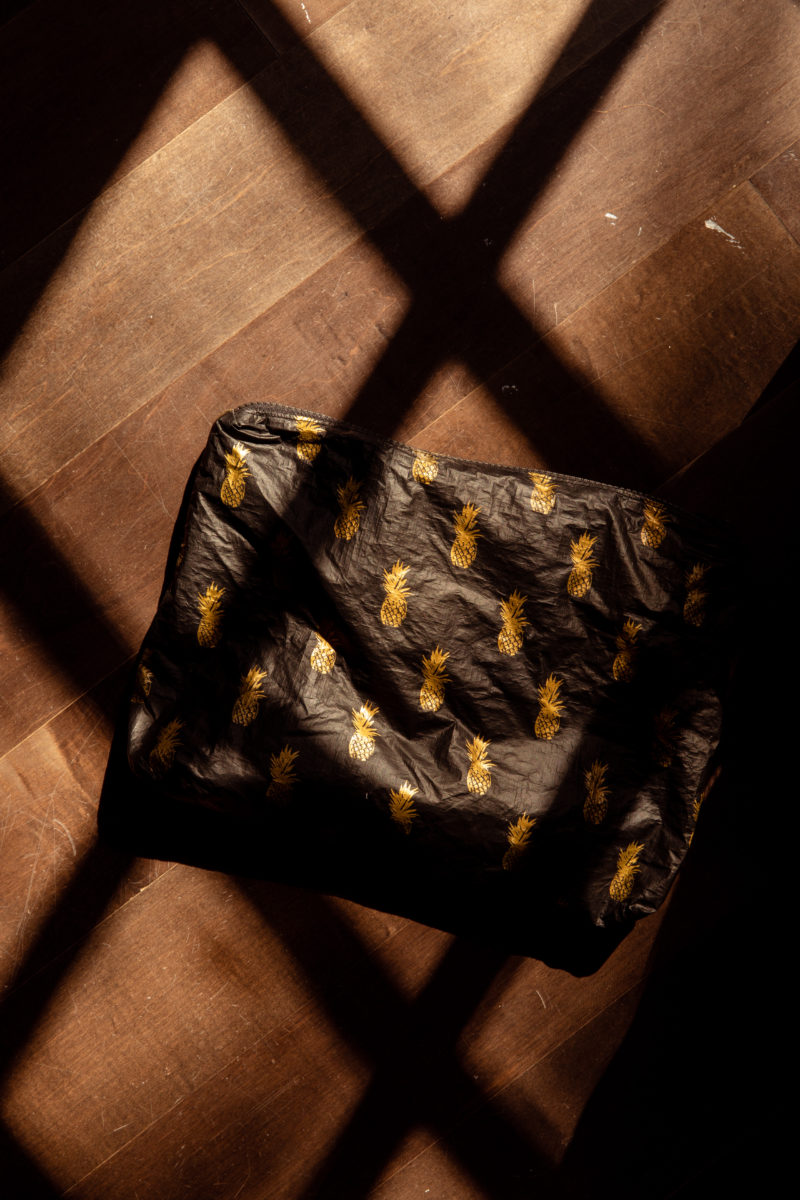 Davis swears by pouches because "they’re waterproof and I’m always at the beach and on the go."

How often do you travel?

I go away pretty frequently. My mom has a house in Puerto Rico, so we go there often. When I was younger [from grade school through high school], I would be in Puerto Rico from December until May and be home-schooled half the year. And then come back and do school here. So, I’ve kind of always missed winter.  My mom was a flight attendant for a long time, for over 10 years. So, she’s always been on-the-go and has always brought us on trips. I’ve kind of grown up being ready to go to the next spot, which I like. I definitely get a little stir crazy when I’m not doing that, but I’ve gotten better at it and like to appreciate when I have downtime and I’m here, hanging out with friends.

Montauk to me isn’t a “destination.” When I tell people I was born and raised here, they’re kind of shocked because they know Montauk as a tourist town, but it’s so much more than that. I know there are locals that get upset with the crowds, but I think it brings in so much business for the community, and I just would like people to respect the beautiful parts of it—little things like picking up their garbage and stuff like that. There are definitely extremes to Montauk. Like now, it’s pretty dead and slow and nice and calm—then in the summer it’s super fun and there are events every night. But I kind of like the mix. 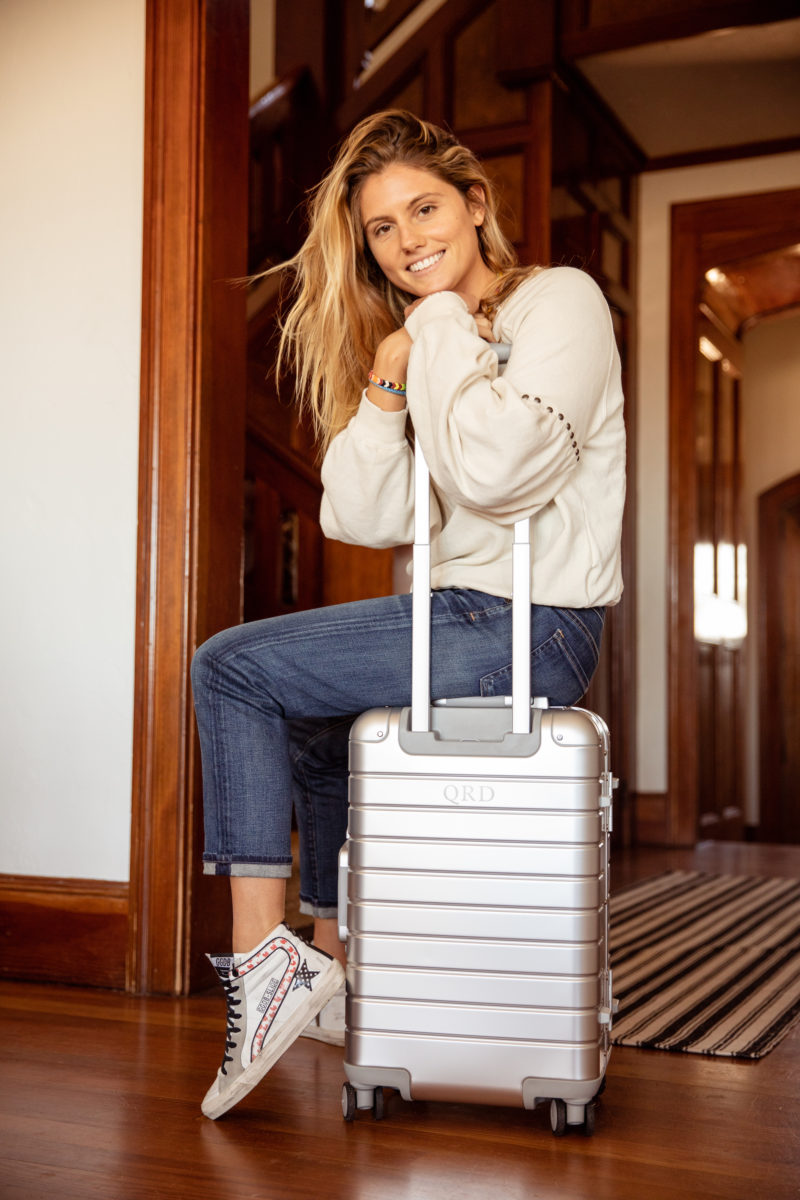 Davis with her personalized Carry On: Aluminum Edition. 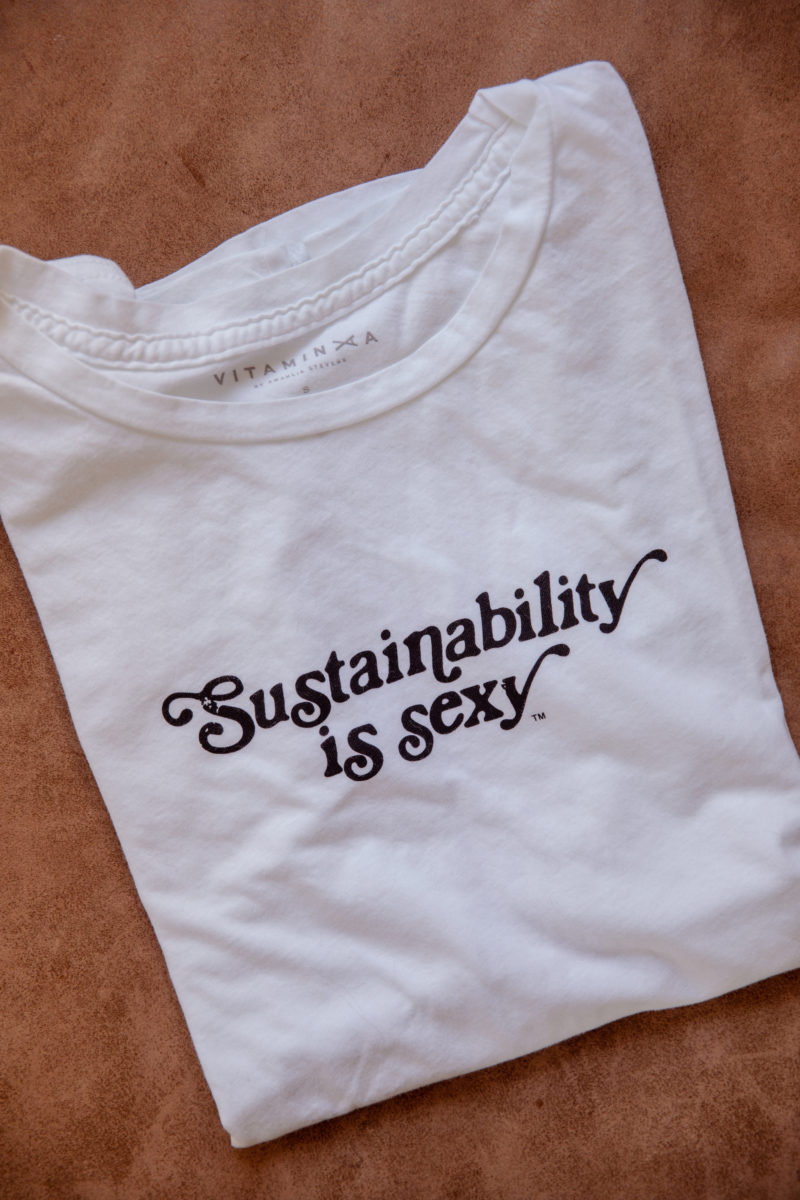 T-shirt by Vitamin A. 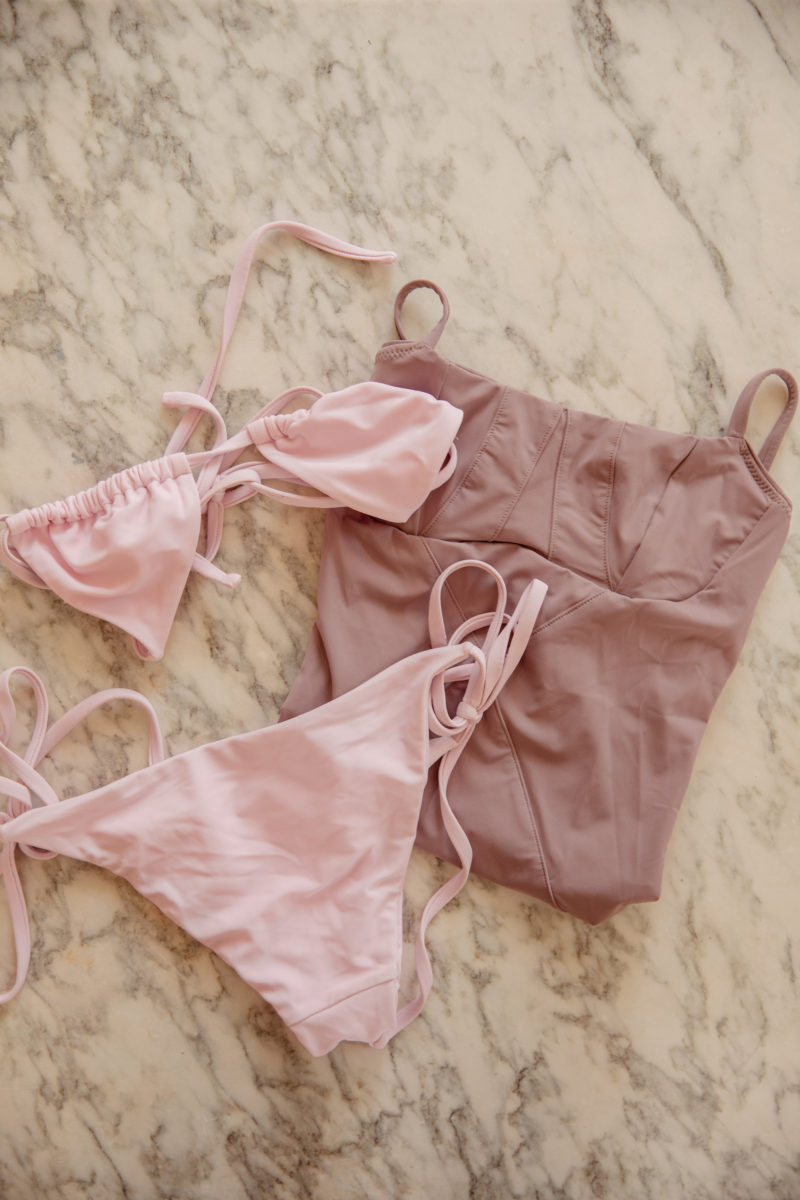 La Marée bikini and Vitamin A one piece swimsuit. 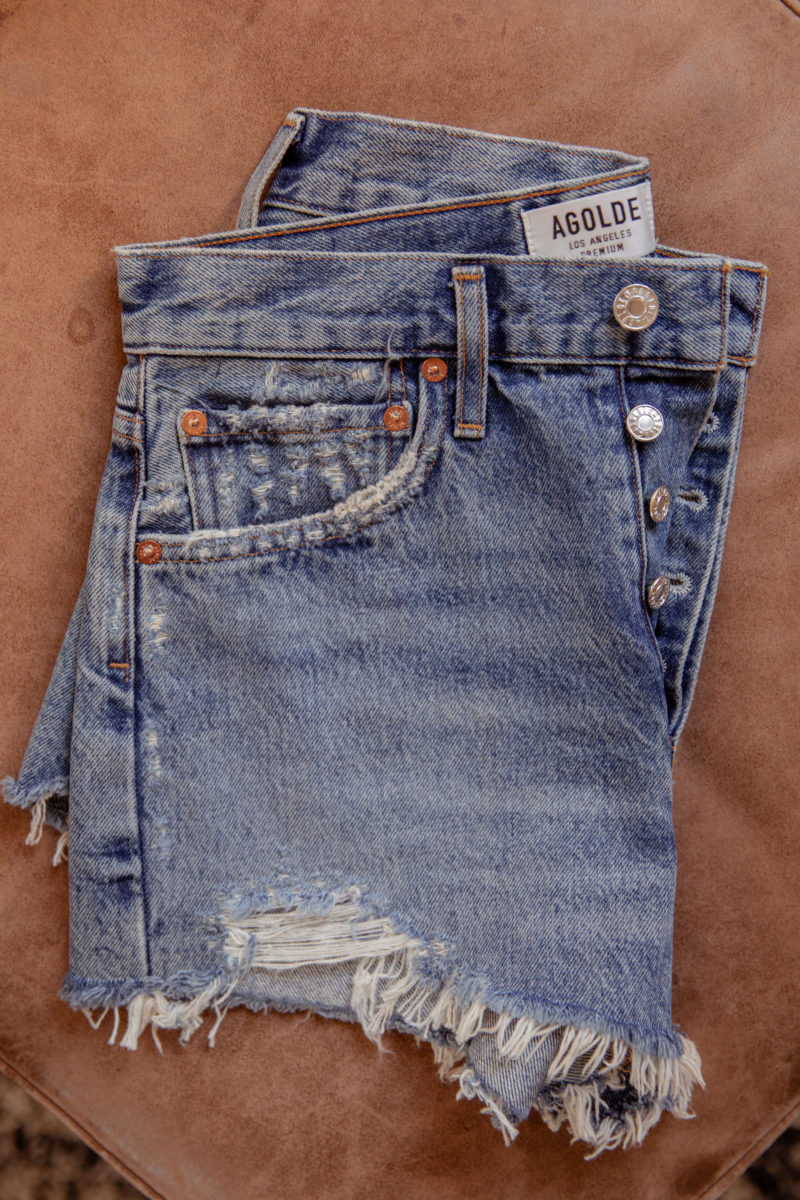 "I live in denim shorts in the summertime or anywhere warm," says Davis.

Do you think you could ever live away from the beach?

No, I don’t think I could. [My boyfriend and I] rented a little spot in New York last spring and I realized that I only really like small doses of it. I have to be on the ocean. I think it’s in my soul. Going surfing relieves any stress or anxiety; it just feels so freeing to me and natural. Even if I’m not surfing, just going swimming or walking on the beach—[being on the water] is what I grew up doing and it feels so right to me. And the community that comes with it. Everyone that hangs out in Montauk is kind of like family. I felt like I always had like 15 older brothers just from being in the surf community.

What are your favorite spots in Montauk?

Happy Bowls, my brother’s acai bowl spot. I loving going to Crow’s Nest for dinner in the summertime. Harvest, which is open year-round and has been here forever, has really good food. It’s fun to longboard at Ditch Planes, and there’s always a bunch of people there that I’ll know. The Dock has really good food like tuna melts and seafood. Surf Lodge, for concerts.

What about your favorite places in Rincon?

El Bohio is my favorite happy hour bar in Puerto Rico. When we’re there I’m pretty sure we end up going every night, but it doesn’t feel wrong because you’re out doing things all day and surfing at the beach. They have fresh juice cocktails that I love. I’m not a big drinker, but I love the ones there. Café 2 Go has really good coffee and acai bowls. I surf Domes a lot, which I grew up surfing. It’s pretty crowded. All the breaks are pretty crowded now, which is kind of like everywhere in the world. 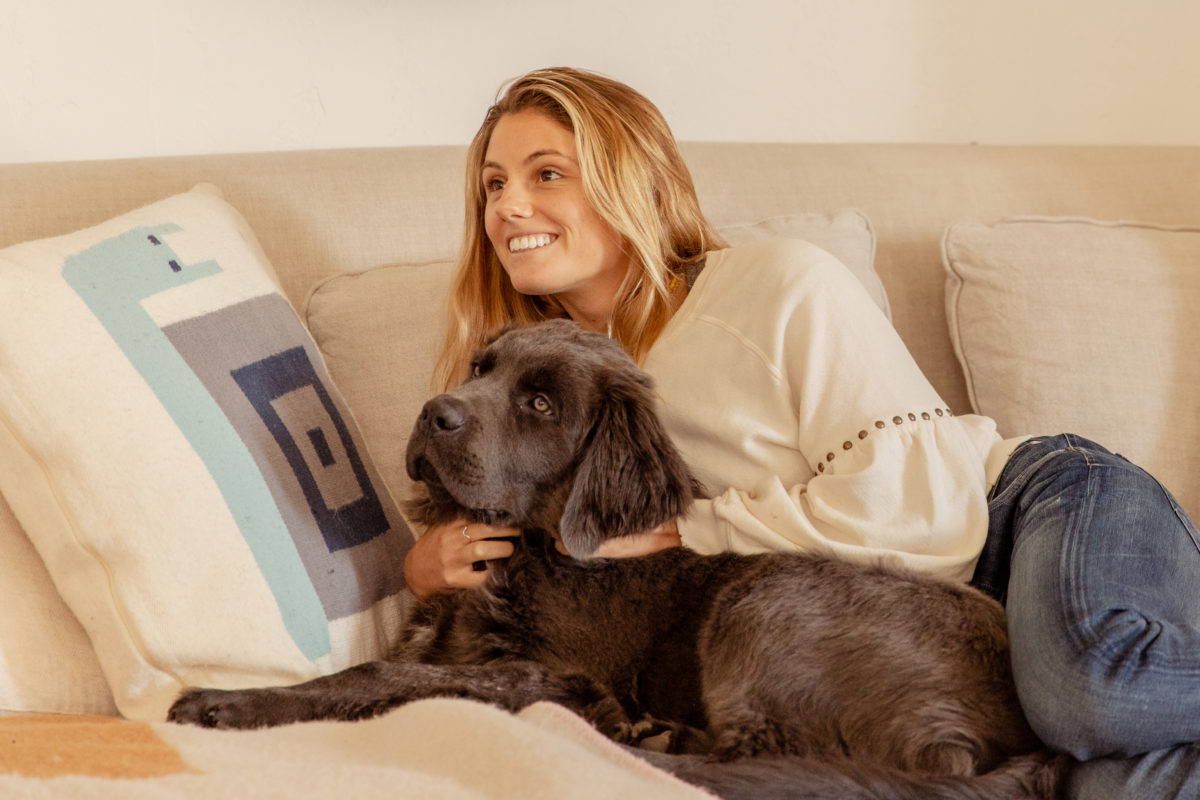 At home in Montauk with her dog.

Where did you travel to most recently?

I was in Byron Bay with my boyfriend and a few friends and family. We were there three weeks and I fell in love. It’s a small town like Montauk. There’s really good food and really good shopping. The beaches were beautiful. Not my favorite part about it, but there are sharks everywhere. I was in Puerto Rico for a while before that. I went to Hawaii before Christmas. I’ve been going to Hawaii for a few months in the winter since I was 15. There’s a lot happening there in the surf community that time of the year.

Tell me about your pop-up shop in Montauk.

I started it last summer. It’s called Quincy, and it’s next door to my brother’s acai shop, Happy Bowls, right on Main Street. I wanted to curate all my favorite things from locals and from traveling, from beauty to swim to jewelry and surf-related products. We carried around 25 brands. It was definitely a lifestyle switch up, and a lot of learning. It was funny to be here for four months straight. I did a few events like a light-making workshop and a journaling workshop. It will open again this year from Memorial Day to Labor Day. We’ll carry products from Warm, Heidi Merrick, Rachel Mae Gold, and others. 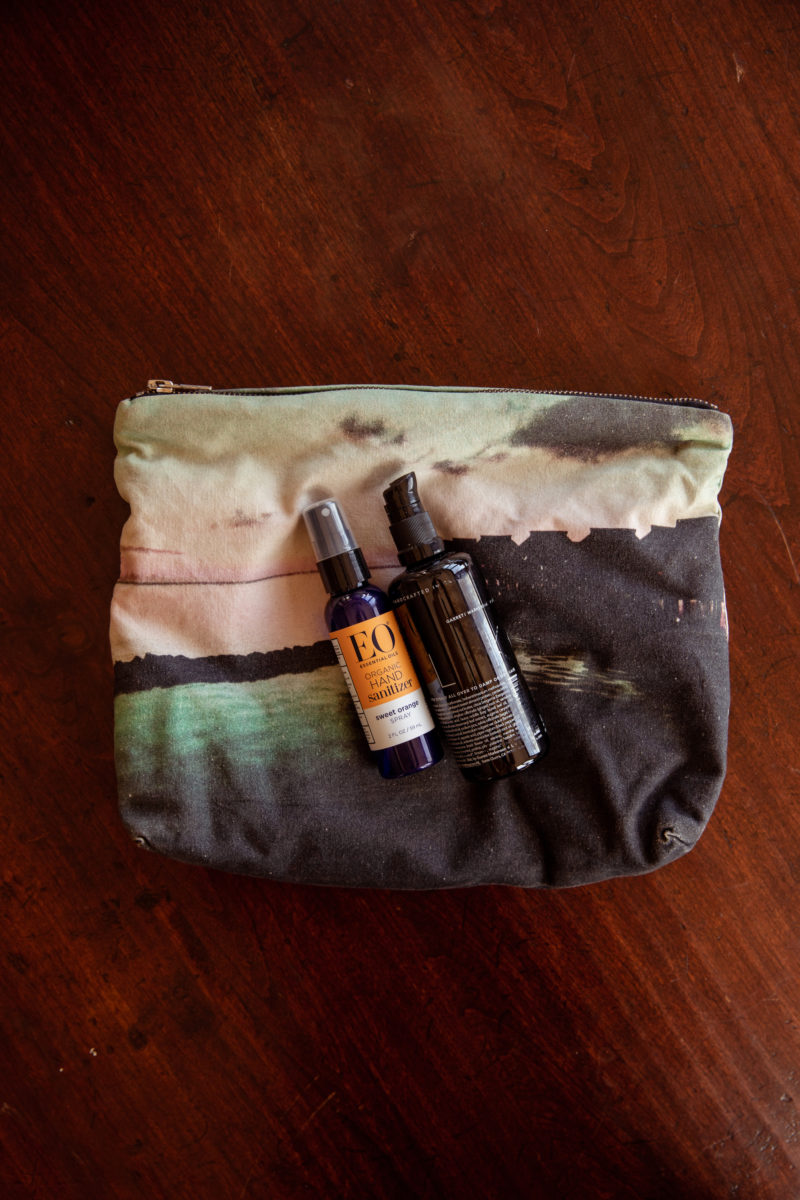 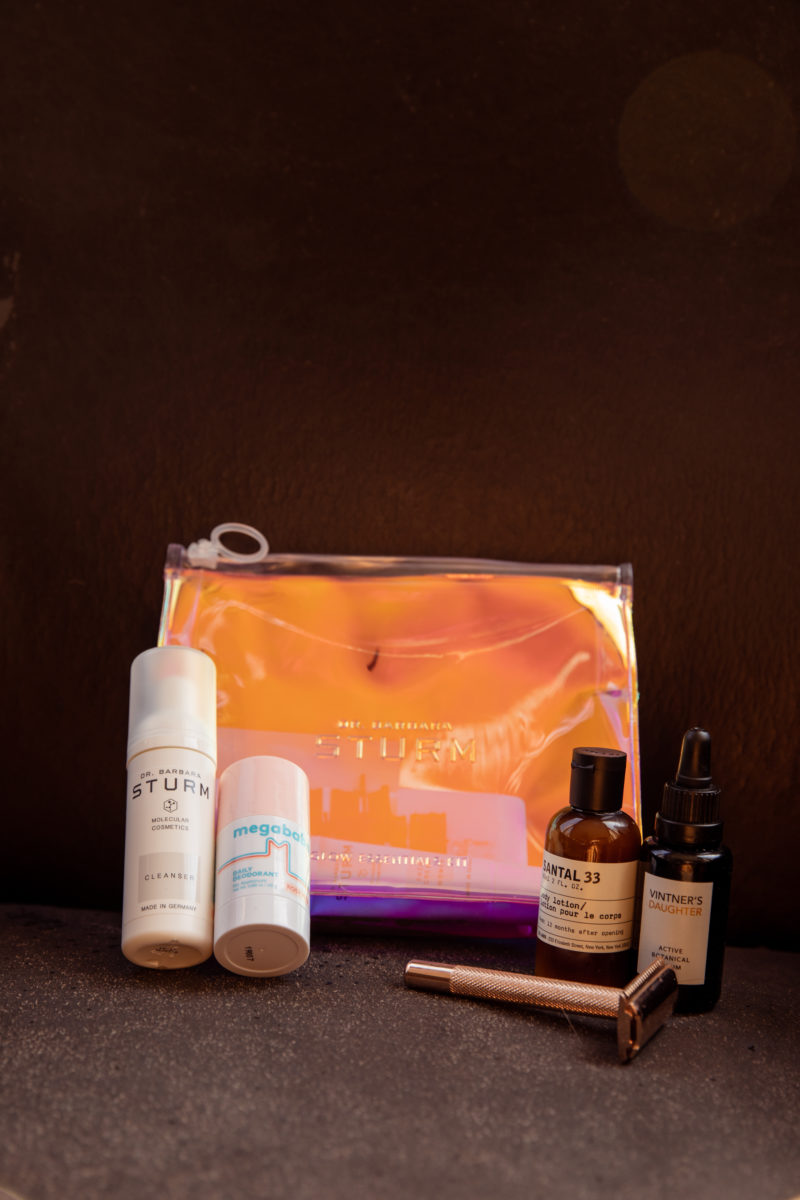 What beauty products save you when you’re in and out of the water so much?

The simplest one ever, which is my favorite now, is coconut oil. I use it my hair as a sleeping mask a few nights a week. I like to put it in at night when I know I’m going to surf in the morning because it comes out pretty easily. I also really like dry brushing before I shower— it’s good for detoxifying. I like it this time of the year because my skin is so dry in New York. I love Barbara Sturm face masks. And I drink a lot of water.

What are your jet lag tips?

Working out helps. CBD helps, too. My favorite CBD is from Open Minded Organics. It’s sold here in Montauk.

Do you bring snacks on your flights?

Usually I don’t, and I get so hungry and then I eat stuff that I normally wouldn’t eat, which is bad. So I brought all these snacks to Australia because it was going to be such a long flight, like fruit and nuts. But, I forgot to declare the fruit I had and I got a fine for $400 right when I got to Australia. I was so prepared it backfired.