It’s a Monday night and the floor of the Mercury Lounge in Manhattan’s Lower East Side creaks under the weight of 200 twentysomethings. Prateek Kuhad, a twentysomething himself, quietly shuffles on stage, accompanied by an acoustic guitar, a drummer, and a bassist, prompting the crowd’s whooping to plateau at a decibel befitting a venue three or four times this size. His stage presence—or, really, lack thereof—says boy next door, but the audible swooning of the audience says rock star. It’s Elliott Smith onstage but Mick Jagger on the floor; the whole room chants along, whether in Hindi or English, to each song in his bilingual set. Couples sway together, hands glued to each other’s hips, eyes glued to the stage. Aside from the woman to my left who drunkenly falls to the floor (and her date, who dutifully picks her back up), his is a captive audience.

A few days later, I meet Kuhad at his hotel, the Indigo, around the corner from the venue. He steps out of the elevator, a few minutes late, in a wrinkly T-shirt paired with bedhead: zero glitz, zero glamour. In all fairness, the performer is exhausted. Monday’s concert at the Mercury Lounge closed out the North American tour promoting his 2018 EP cold/mess. And while he may be a rock star in the eyes of his fans, that’s hardly what he set out to be. “I did not think that I was going to be a musician. It was never the plan at all,” he tells me, helping to make sense of the math and economics degree that he earned from NYU in 2012.

The Jaipur-born crooner—whose lovey-dovey lyrics are tender and relatable, if a little sugary at times—is a bit of a musical black sheep in India, where touring acts like his are rare. For romance, Indian pop culture favors the extravagant confections of Bollywood; for music, indie songwriting and production is all but unheard of, taking a backseat to live performances from larger bands. But with 100,000 followers and counting on Instagram and millions of streams on Spotify, Kuhad has successfully carved out a place for himself not just in India but around the world, opening doors for other South Asian creatives whose art defies convention.

As we talk about his career and his travels, I think back to the performance at the Mercury Lounge. At the start of each song in his set, the room flooded with the blue light of smartphones—as if it were choreographed, everyone around me raised their devices above their heads to record video. I noticed several people holding up their phones jointly with their lovers, unwilling to sacrifice either an opportunity for good content or a moment of togetherness. After a few phrases, any lingering phones would disappear back into the pockets and purses from whence they came, but the heart emojis remained in everyone’s eyes all the same.

Here, the Delhi-based musician shares how he goes on tour, from packing film cameras and instant coffee to finding romance and jamming to vintage John Mayer. 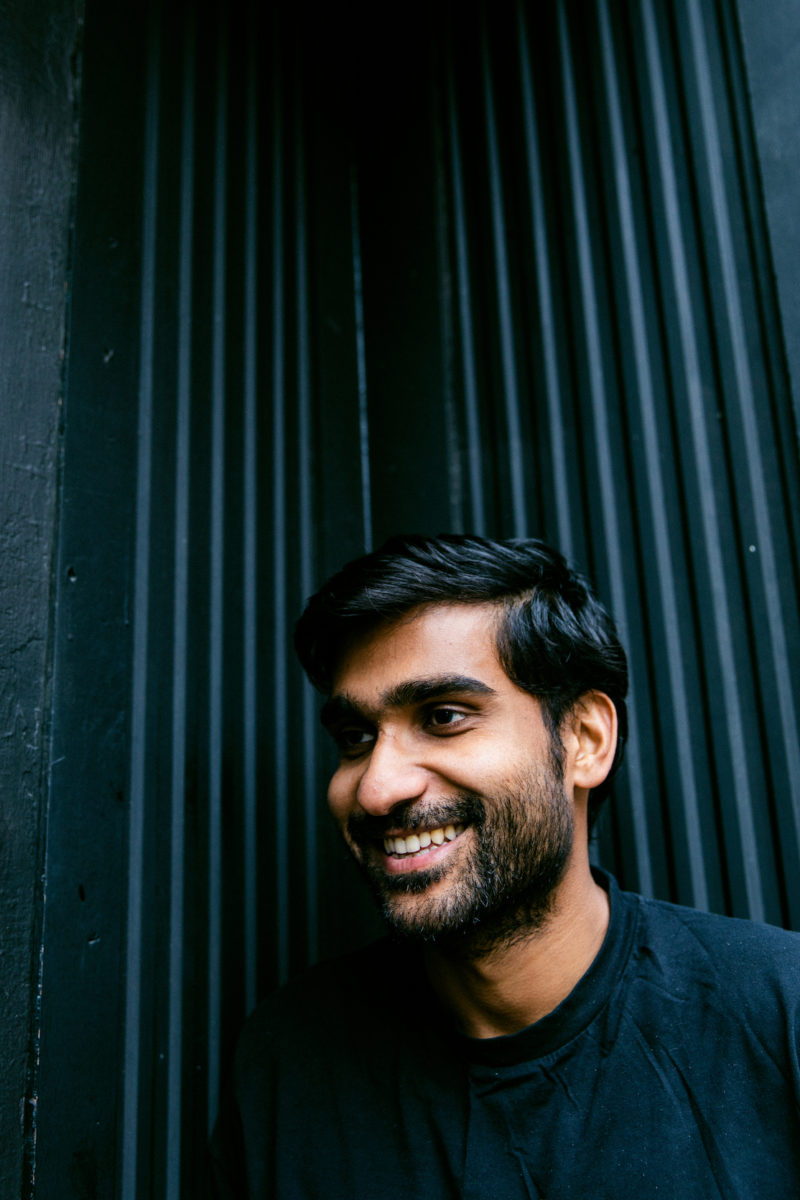 “To appreciate anything good you have to see the bad.” 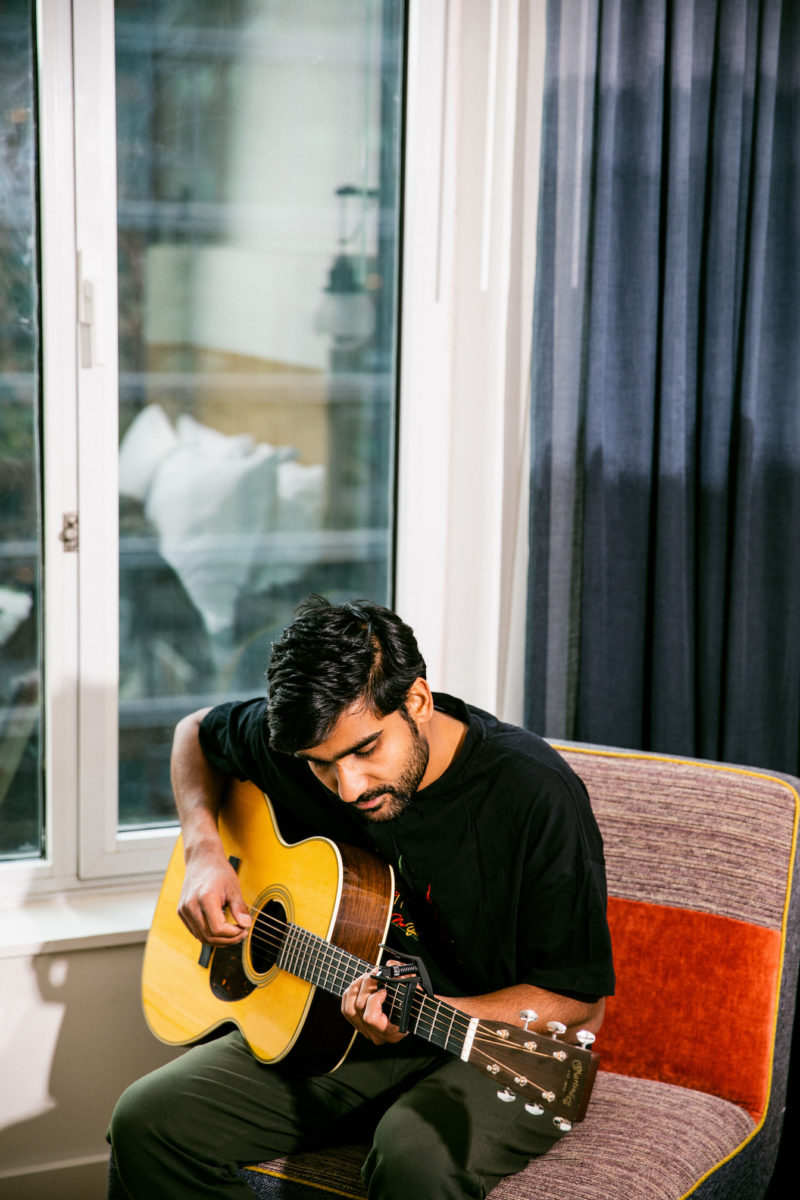 “You meet a lot of people on the road… But it’s not very emotionally comforting.”

Did you visit New York a lot before attending NYU? What was that transition like coming from Jaipur?

I had never been to the States before. Really. The first time I landed in the States was for NYU freshman week. It was really strange at first, but when I got used to it I kind of fell in love with the city. I wouldn’t have gone back to India if it weren’t for wanting to do music; it was too expensive to try to do music in New York. But one thing that I was really exposed to living here was songwriting culture and knowing the value of writing a song versus just being in a band and making music. In India it’s not like that. There’s not a lot of, like, songwriting, especially in the independent music scene. Whereas I put a disproportionate amount of time and effort into making all my records sound right. That’s why maybe my music is a bit different from other musicians [in India], and from Bollywood for sure.

It was cool how everyone at your show was singing along in Hindi and English. Is that just a New York thing or did you experience that in other places on this tour?

It was like this in all the shows in the U.S., actually. It’s like this in India also. Before this, most of the songs that got really popular within my Indian fan base were all the songs in Hindi, but now the English songs are just as popular. It’s interesting, especially from an Indian context, because the new urban kids from India are completely multilingual, you know? They talk and speak and think in both languages. We obviously grew up speaking in Hindi and knowing Hindi, at least in the northern part, but almost the whole country knows English as well.

What’s different for you about touring in India versus touring in the U.S.?

In India it’s really small-capacity venues, like 100 to 200 people, 300 at the very most. And then there’s big auditoriums and stadiums—there’s nothing in between. Everywhere else I’ve noticed there’s like 200-cap venues and then 400 and 600 and 1,000 and then 2,000. And it keeps going up. So you have to kind of find spaces and work them into performance venues. Which is what we do, actually. We have to do our own rentals and get sponsors; we have to do it all from scratch in India. [For example], there are no tour buses in India; they just don’t exist.

Your music is obviously quite romantic. How do you maintain a love life on tour? Is that a priority to you?

No. I mean you can’t have a steady love life when you’re on the road. It’s something I’ve learned the hard way after two years. I was actually in a really solid relationship all through college and then after that for a couple of years. Pretty much the first eight years of my twenties, actually, I was dating somebody. It was very stable. But invariably, it gets too busy on the road. It’s too hectic to do anything else, you’re not in that headspace … or maybe it’s just that I haven’t found the right person. It could be that as well. You meet a lot of people on the road, though. It’s really fun. But it’s not very, like, emotionally comforting. 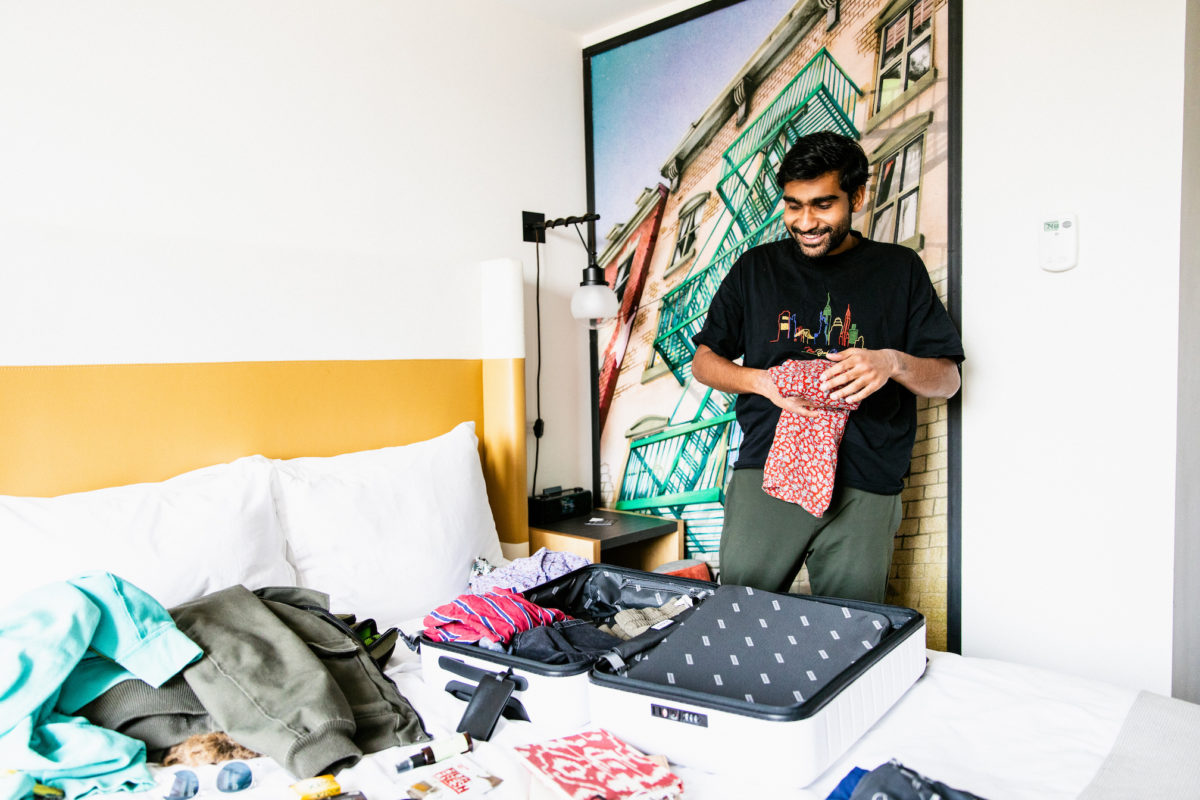 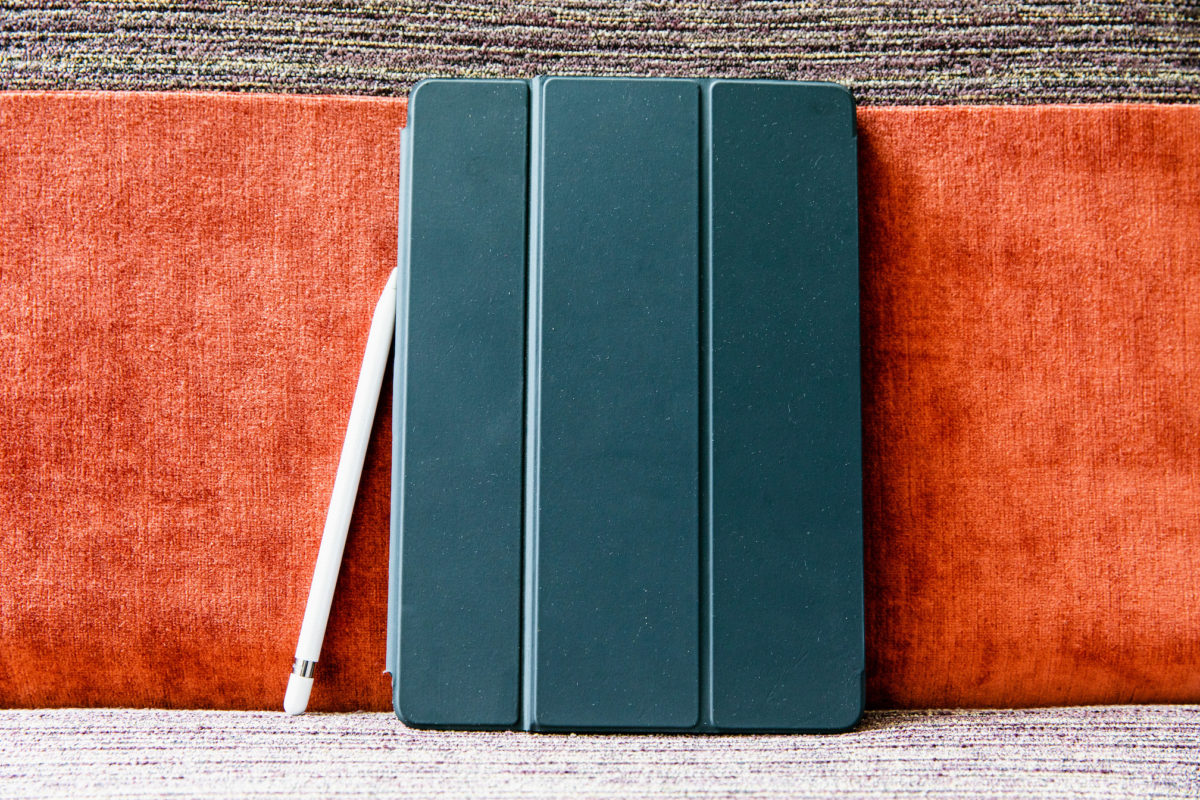 “One thing that I was really exposed to living here was songwriting
culture and knowing the value of writing a song.” 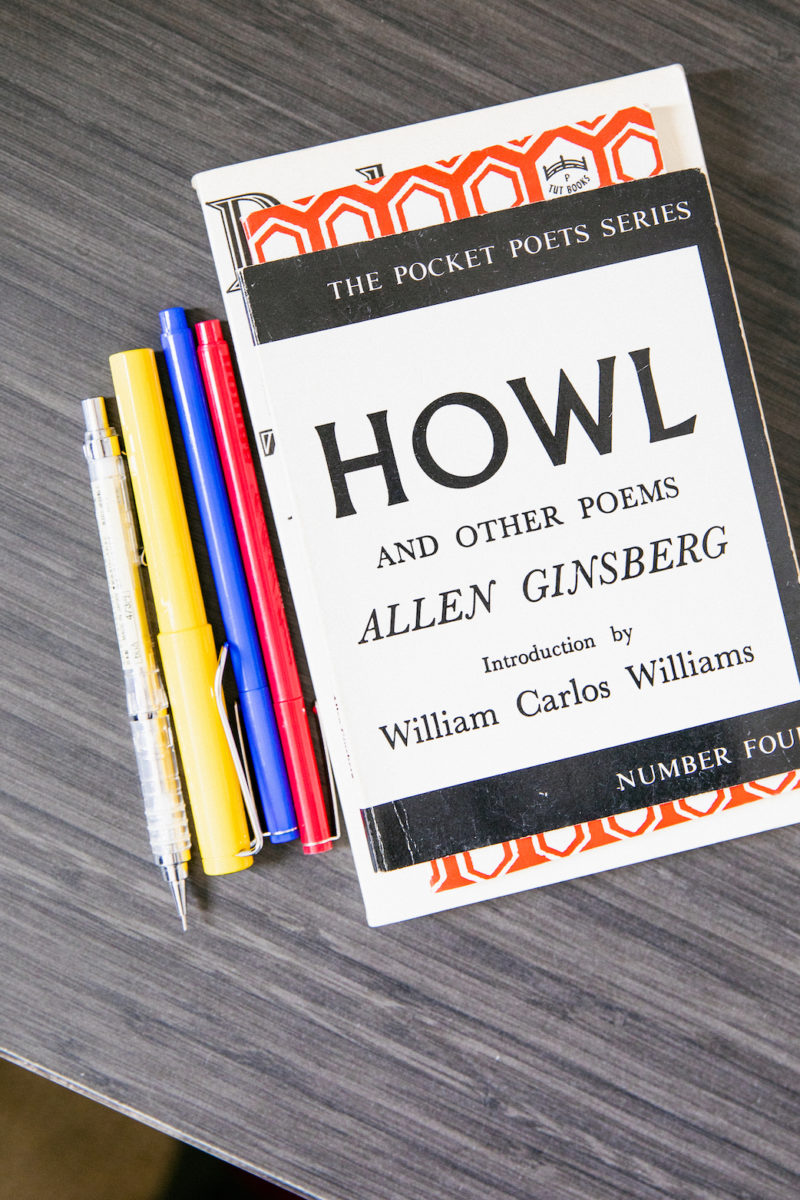 A stack of books, including Howl and Other Poems by Allen Ginsberg, keep the musician entertained on the road.

Did you have a favorite city on this tour?

It was snowing like crazy and our flight was canceled and the hotel that Delta put us in had a water park and an adventure park inside—so it was really bizarre. It’s snowing, it’s like 10 p.m., we’re in our winter coats, we’re holding our guitars, and we’re going up to our rooms. And there’s a horde of people who are going up to their rooms in swimsuits because they’re coming from the water park. And I was just like, what the hell is going on? It’s like this weird lodge with fake bears all over the place. So bizarre, man. The rooms were massive with a queen bed and then, like, two tiny bunk beds, probably for kids. Everything about it was bizarre. But no, I’m sure Minneapolis is cool. I’ve heard it’s a cool city actually.

But in terms of other cities, Los Angeles is really fun. That was the part of the tour when we had two or three days off. We did some beach time and played basketball. We were staying in Venice at this Airbnb on the canals. Abbot Kinney was right next door and the beach was right next to us; it was a great place to be. We met a bunch of cool people in L.A.. It’s kinda like…if you don’t know anyone in L.A., it sucks; but if you know people, most of them end up being really cool. Boston was really cool. I like running a lot and I ran all around the river. It was amazing, it was my favorite run this whole trip, just going over bridges. I’ve never hung out in Boston before. Montreal is also really cool. They were actually a very different crowd from the rest of North America. Everybody was really respectful and quiet, more so than anywhere else.

I like gaps in music and songs when I do shows. Sometimes there’s a stop, like a pause, while I’m onstage, and it’s really silent. I started doing it just by accident and then I realized that I really liked it. It gives a contrast… Sometimes people don’t think a lot about silence, you know? It’s like yin and yang: To appreciate anything good you have to see the bad. The music is in contrast to the silence so that when it comes back, it’s a bit more impactful I think. 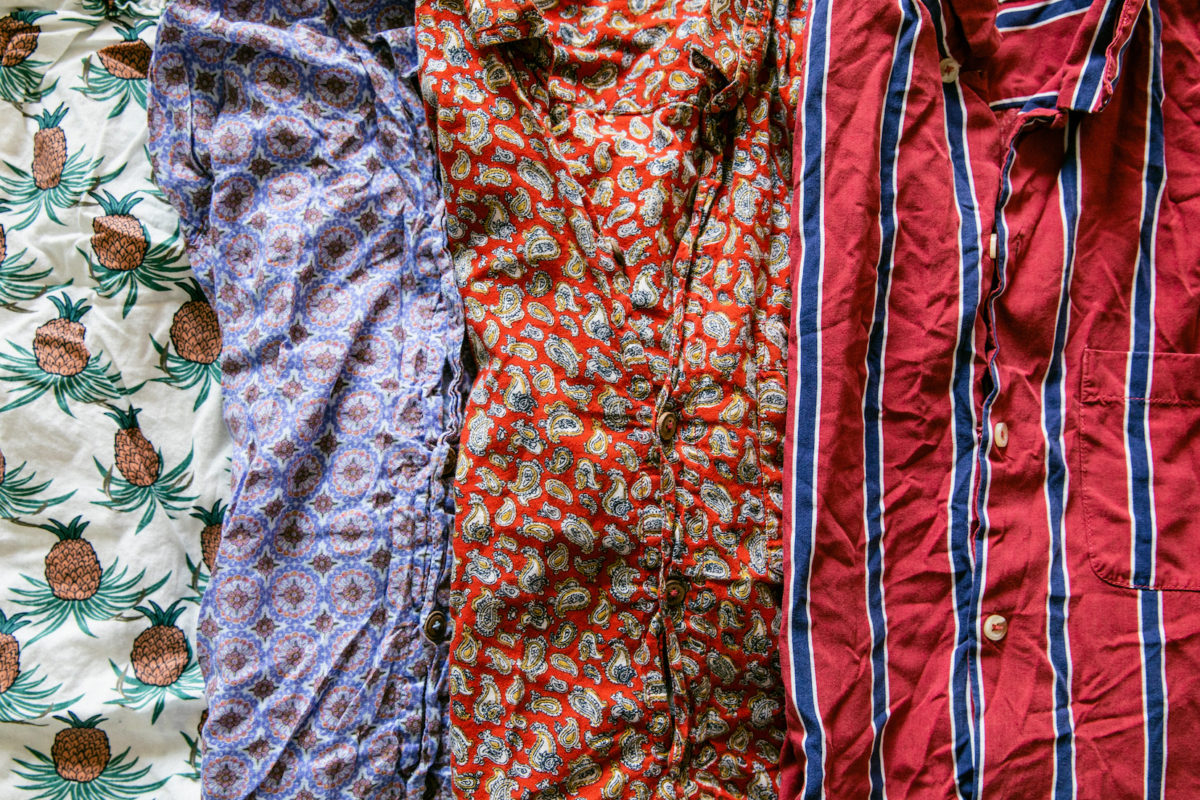 “These are from Jaipur, the town I grew up in. Block printing in Jaipur is huge.
So I wear a lot of printed shirts, especially, like, when you have to wear something nice onstage." 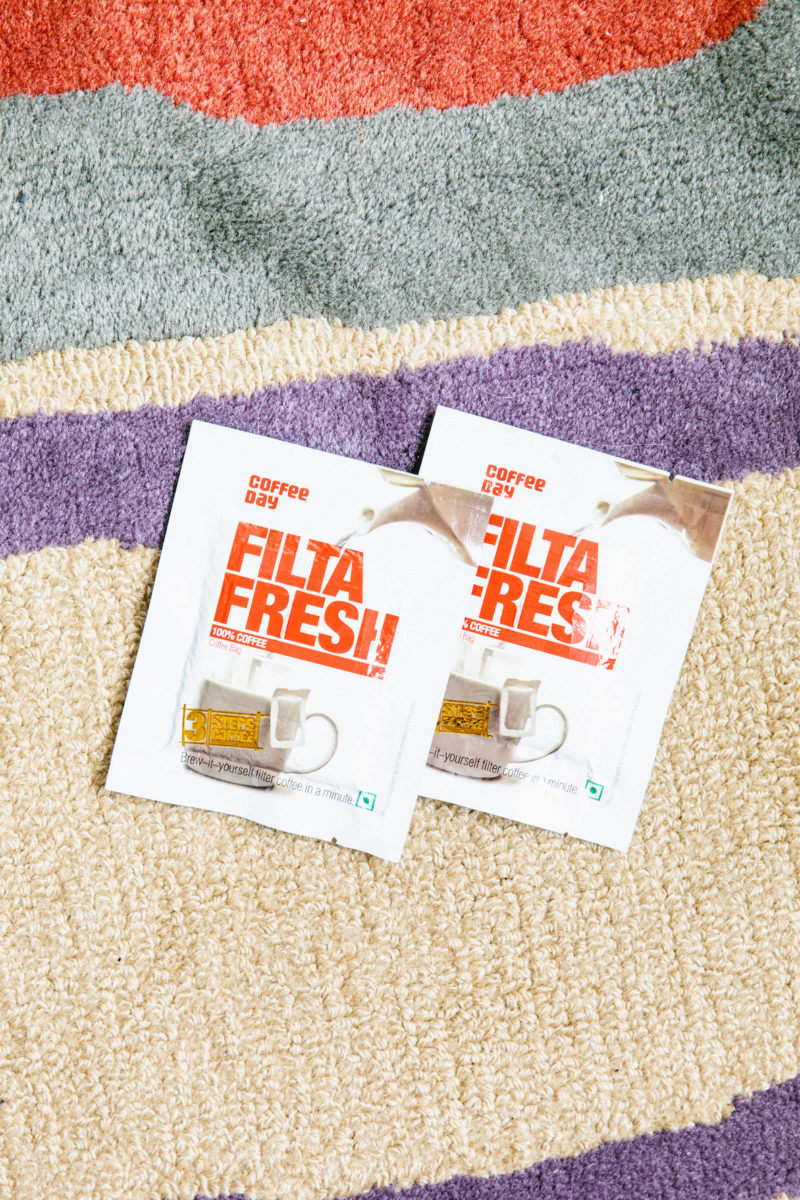 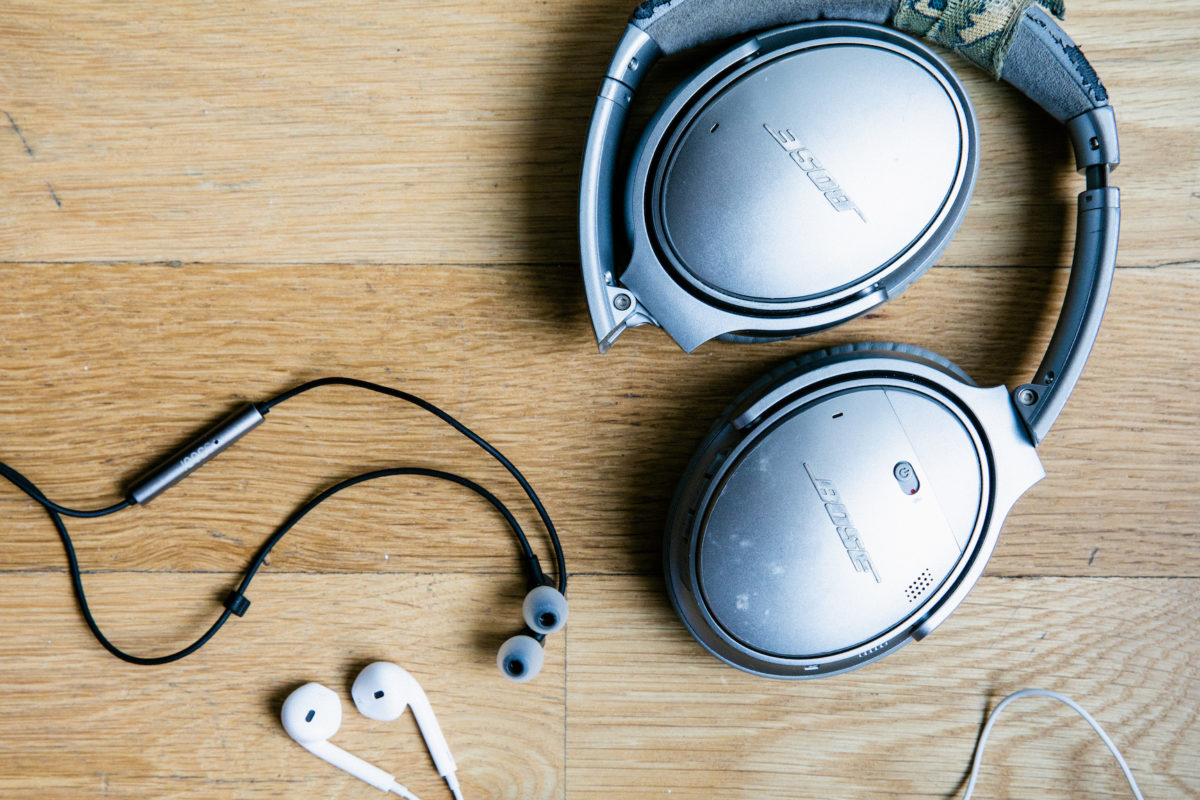 “I carry a few headphones usually. I have Bose and Apple headphones, and AirPods for running." 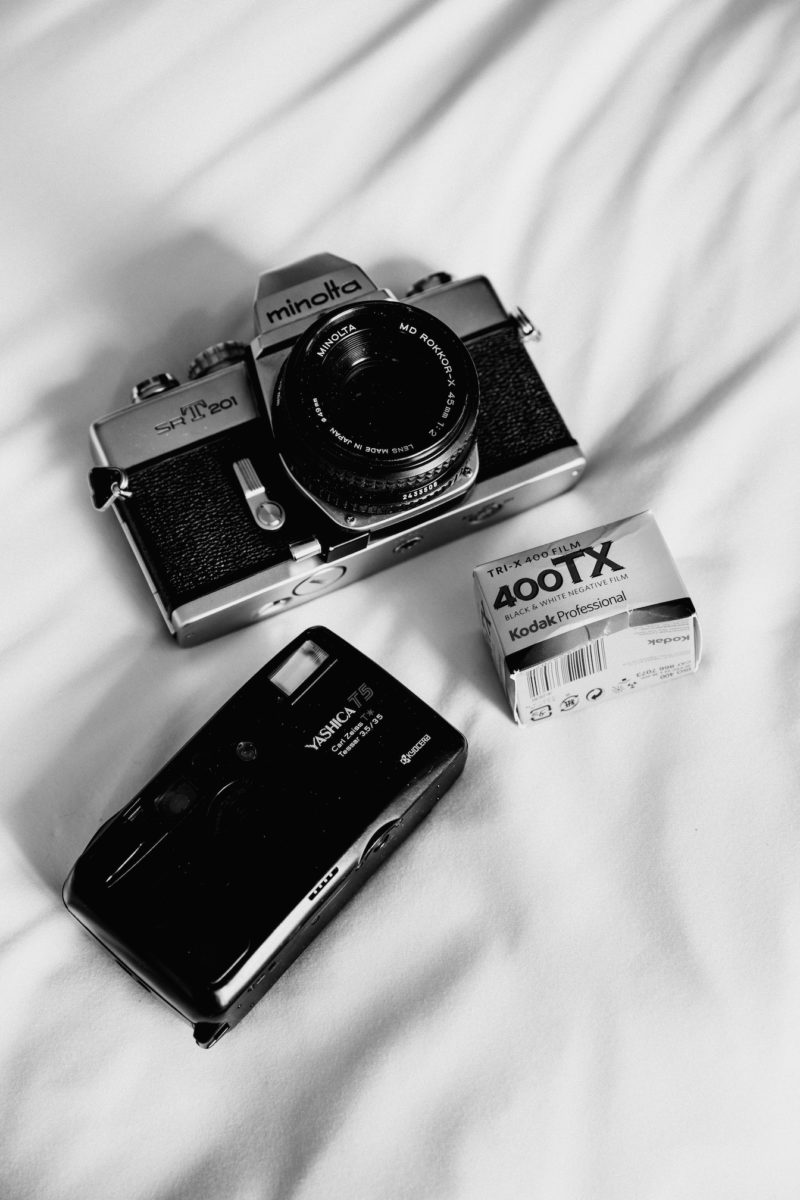 “The [Yashica] point-and-shoot I just got in Berlin, it’s really, really iconic.”

What do you always take with you on tour?

I carry a bunch of cameras because I like shooting film. The [Yashica] point-and-shoot I just got in Berlin, it’s really, really iconic. A bunch of pro photographers have used it for portraits. It’s a pretty cheap camera, but it’s got a really excellent lens so it takes really good photos. And the [Minolta] I got in New York last year. I’ve been carrying around this Indian face mist for the last six months or so. Sometimes you don’t really have a shower and you just need to feel fresh. Aside from those I always have this backup coffee, it’s this weird Indian brand called Café Coffee Day. They suck, but when there’s nothing around and all you have is hot water, it just fits on top of a cup and you can make it. It’s super basic.

Do you find that you often have to use those?

Yeah. Even a few days ago, we were staying in New Jersey at this place called Basecamp for touring musicians. It’s this branded thing; they have a bunch of protein bars by brands, a little recording setup, they even had tea—but they didn’t have coffee for some reason. They had a coffee machine and everything, but no coffee. I didn’t want to go walking around New Jersey looking for coffee, so I was like, fuck it. Luckily I had those.

What kind of music do you listen to on the road?

I listen to a lot of hip hop, but I’m not, like, that deeply entrenched into hip hop culture, so the artists that I like are pretty popular in general. Kendrick Lamar, Kanye West, Brockhampton. I listen to a lot of singer-songwriters of course. I love Hozier and Tom Odell and the Lumineers.

I used to listen to a lot of John Mayer back in school. That’s one of the first few artists I listened to a lot of. He’s awesome. He’s still awesome.