Love in the Seychelles: Traveling with a New Partner After Quarantine

Writer Amanda Zurita bike riding along the coastline of La Digue, the fourth largest island (and third most populous) in the Seychelles.
Travel JournalAmanda Zurita

Celebrating a return to travel and new romance, this writer and her partner embarked on a spontaneous journey to the Seychelles.

Travel has always been the great love of my life. For the past decade, I’ve spent nearly half of every year abroad for work and pleasure, exploring Spanish hill towns, diving shipwrecks in Bali, watching the sunset over the salt flats in Bolivia. Travel feeds me (literally and figuratively), challenges me, inspires me—rewarding my curiosity with splendor and a stockpile of memories. So, when the pandemic called me home to Seattle from a work assignment in Cambodia in March of last year, it broke my heart in a visceral way. I’d lost the thing I loved most, with no promise of return. I thought I’d be stateside for a month, maybe two. But we all know what came next.

I spent hours of my time in quarantine scrolling through photos of former trips. Some people pull up happy snapshots of themselves with their exes when they feel wistful, but I mull over pictures of vibrant parades in Mexico City and heaping bowls of pasta in Rome. I was crestfallen and uncertain, anxiously trying to envision what my future might hold. Yet the pandemic had its share of silver linings. By the time international travel became an option again, I’d road-tripped through national parks and camped on the Olympic peninsula. I had reacquainted myself with my favorite Seattle neighborhoods.

And I’d fallen in love. 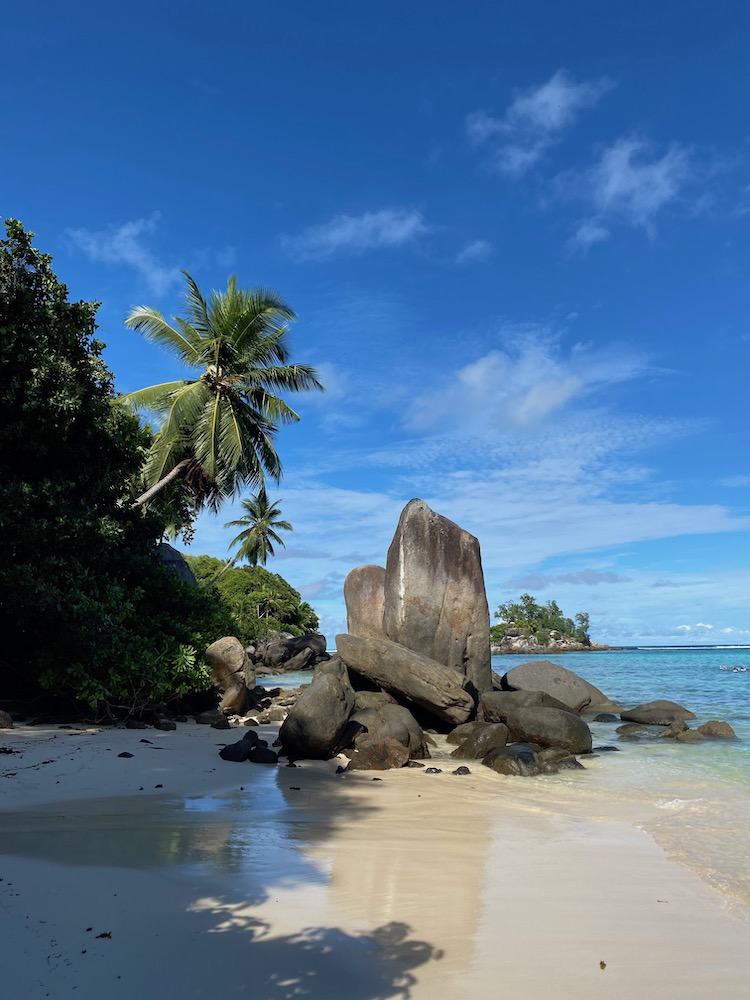 The Republic of Seychelles is an archipelago in the Indian Ocean, made up of 115 smaller islands. 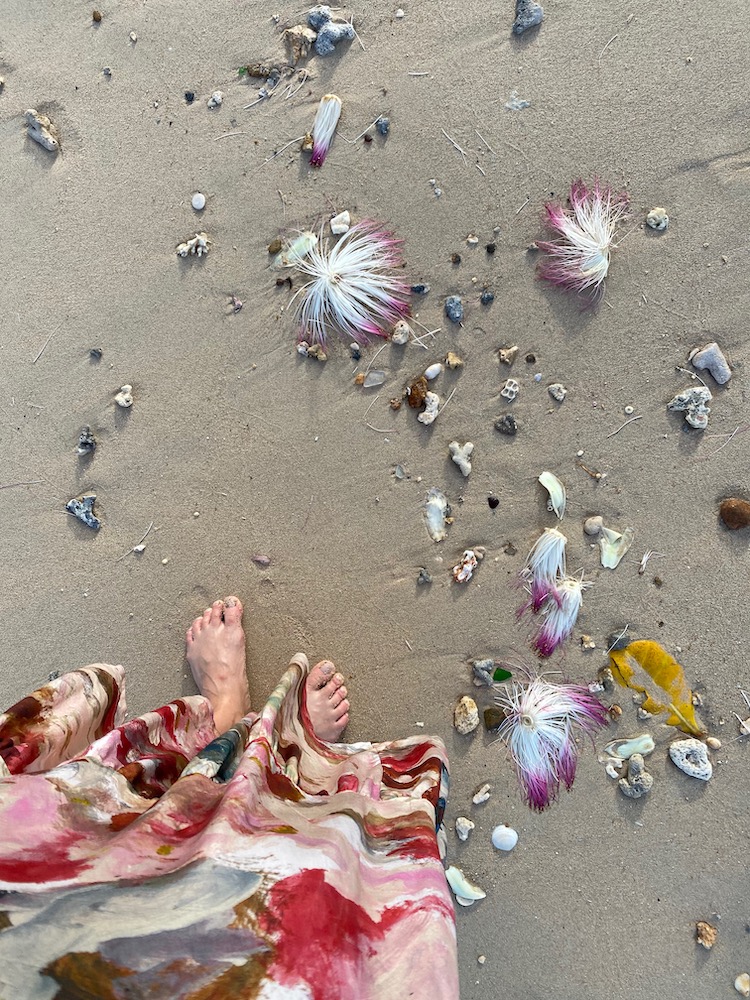 Soaking in the platinum sand on Mahé, the Seychelles' largest island.

Matt and I had been dating for under two months when the Seychelles announced it was opening to vaccinated travelers. It started as a joke: What’s the most ridiculous vacation we could take as our first one together and our first trip abroad since COVID? In my mind, the African island chain was reserved for celebrity honeymooners and millionaires on holiday, but a quick search revealed that flight prices were reasonable, that not all the hotel rates were for royalty. So, we laughed about it, made imaginary plans, and felt out each other’s limits of what was possible. Hypothetically, could we take off work? Theoretically, would we travel well together?

In late March, we booked flights to the Seychelles with a four-night stopover in Istanbul on the return. About a month later, fully vaccinated, we got on a plane. We’d never had a drunken date in a dive bar, hadn’t sat in a dark movie theater or danced to live music—yet here we were, flying halfway around the world on a two-week vacation.

We landed in the Seychelles during a rainstorm, but by the time we had checked into our seaside room at the Bliss Hotel on the northwestern tip of Mahé island, the clouds had parted and the sun revealed what I can only describe as paradise: aqua waters, soft sand, swaying palm trees. We hardly set down our luggage before rushing out into the ocean where we bobbed in the waves laughing at the absurdity of it all, unable to believe our luck. For a week, we crisscrossed the island in our little rental car, maneuvering through narrow lanes and mountain switchbacks. Or, I should say, Matt drove and I navigated, DJ’d, and generally marveled at the world outside our windows. With a bag full of snacks and a cooler of Slow Turtle Cider, we explored beach after stunning beach, ate fish and chips from roadside stands, and looked at each other in awe so often that the word “wow” almost lost its meaning.

Travel Crush of the Week: Tahiti → 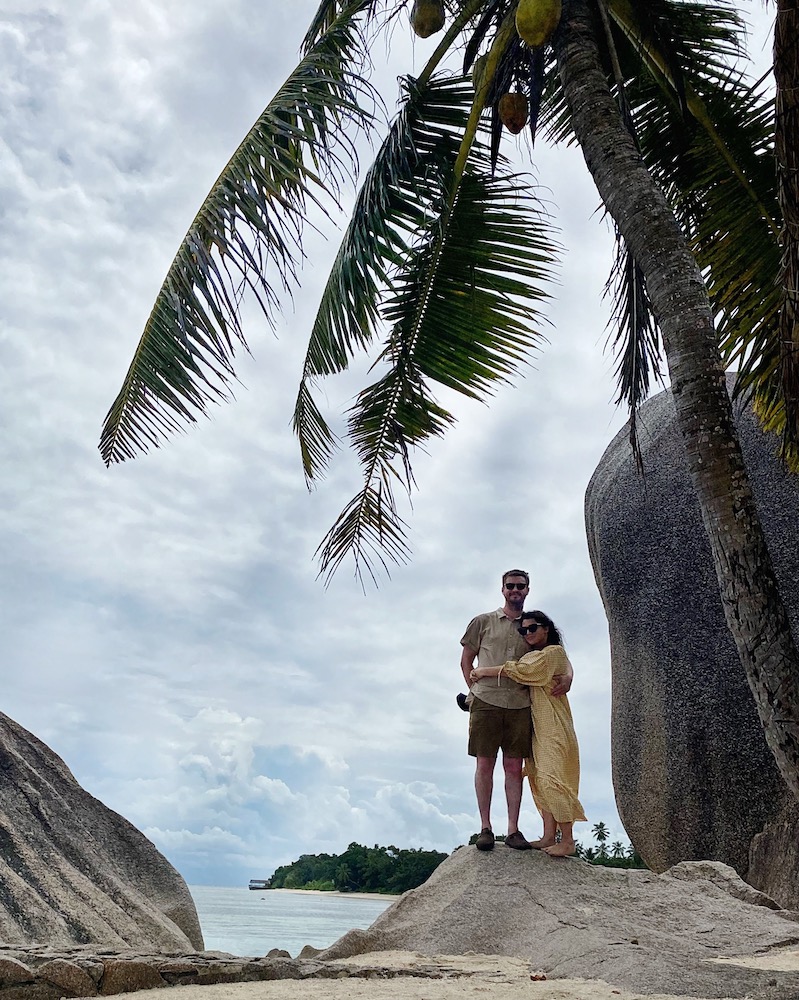 "I wanted someone constant who added to my life, who energized me," says Zurita. "Turns out, he was waiting on the surface."

At the time in early May, the Seychelles was one of the most vaccinated countries in the world with over 60 percent of its citizens fully vaccinated. We had our temperatures checked daily at our hotel and at any restaurant or store we visited, and almost everyone we encountered was wearing a mask. A few days before our departure, we received an email from the local health authority to schedule our mandatory COVID tests at a clinic that was open 24 hours. Plus, social distancing wasn’t often an issue as we would have whole stretches of beach to ourselves.

One afternoon led us to the Baie Ternay Marine National Park where we were the only people in the horseshoe-shaped bay. We waded out into the shallow water, barely more than knee-deep for 300 meters. Donning our snorkels with our noses nearly touching the sand and seagrass, we’d been swimming for ten minutes when I glimpsed something dart away out of the corner of my eye: a stingray with a three-foot wingspan. We saw three more before the sun set and my bravery wavered, but I wasn’t quite done with oceanic thrills. A few days later, we boarded a boat for a half-day excursion for me to go diving and Matt (who doesn’t dive) to chill with the deck crew.

Prior to meeting Matt, I’d been very happily single for years. I am hyper-independent, a bit introverted, and used to both being and traveling on my own. It was one of my biggest concerns leading up to this trip: How would I deal with being around someone for weeks?

Back underwater, solo for the first time since we’d arrived, I saw the divemaster spot something and take off in its direction. I followed, catching up just in time to see six dolphins swim by. Never in my nine years of diving had I seen dolphins! And all I could think was how much I wished Matt were there to witness the flicks of their fins. It occurred to me, down in the depths, that I’d needed space from people I’d dated in the past because oftentimes being with them felt exhausting, like something was being taken away from me. But after a year of being very, very alone, without travel to distract me, I wanted someone constant who added to my life, who energized me. Turns out, he was waiting on the surface. 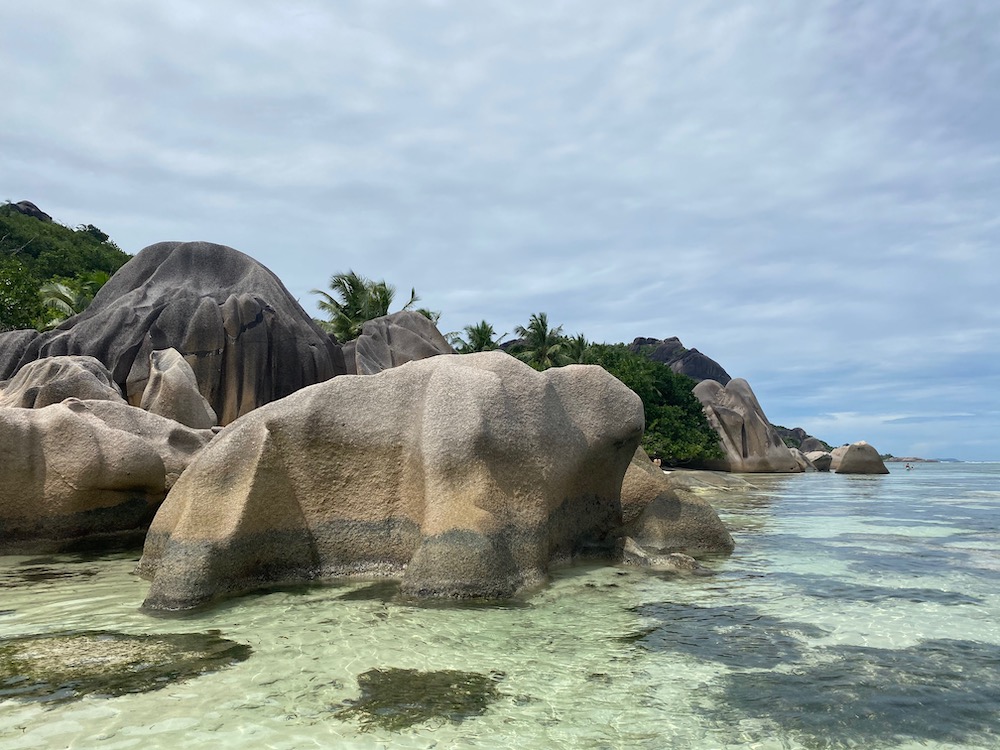 The next day, our last in the Seychelles, we took a day trip to La Digue where we rode bikes along the coastline. The island is home to the most photographed beach in the world, Anse Source d’Argent, where the backdrop of granite rocks against crystal waters and palm trees resembles a set from Jurassic Park. It was, understandably, crowded, so we hopped back on our bikes to explore the more remote Grand Anse beach. There, we watched small sharks round up schools of fish inside the rolling waves as we toasted goodbye to this segment of our adventure.

As for Istanbul, well, the day before we left Seattle, Turkey declared a country-wide lockdown that would be in place during our planned visit. Though they were still welcoming tourists and most of the major sights would be open, residents had to remain in their homes and all non-essential businesses were required to close. It no longer felt responsible (nor practical) to visit as we’d planned, so I scrambled to find an alternative, checking every nearby country that was open to travelers. Greece? We’d both been. Egypt? Croatia? Flights didn’t line up. We landed on Jordan. 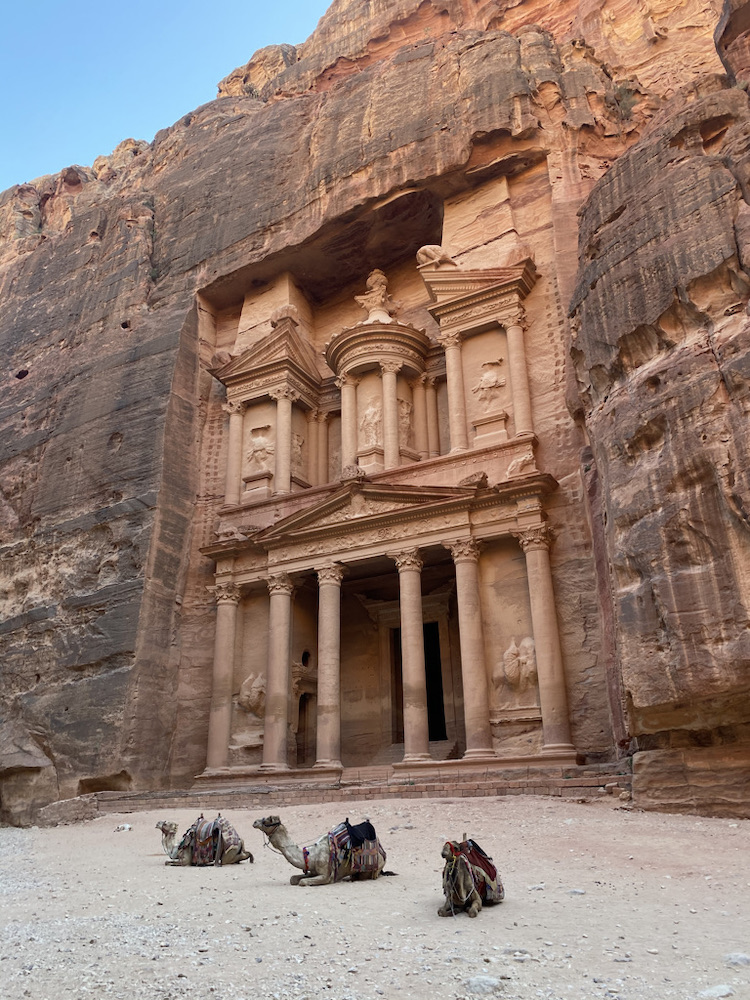 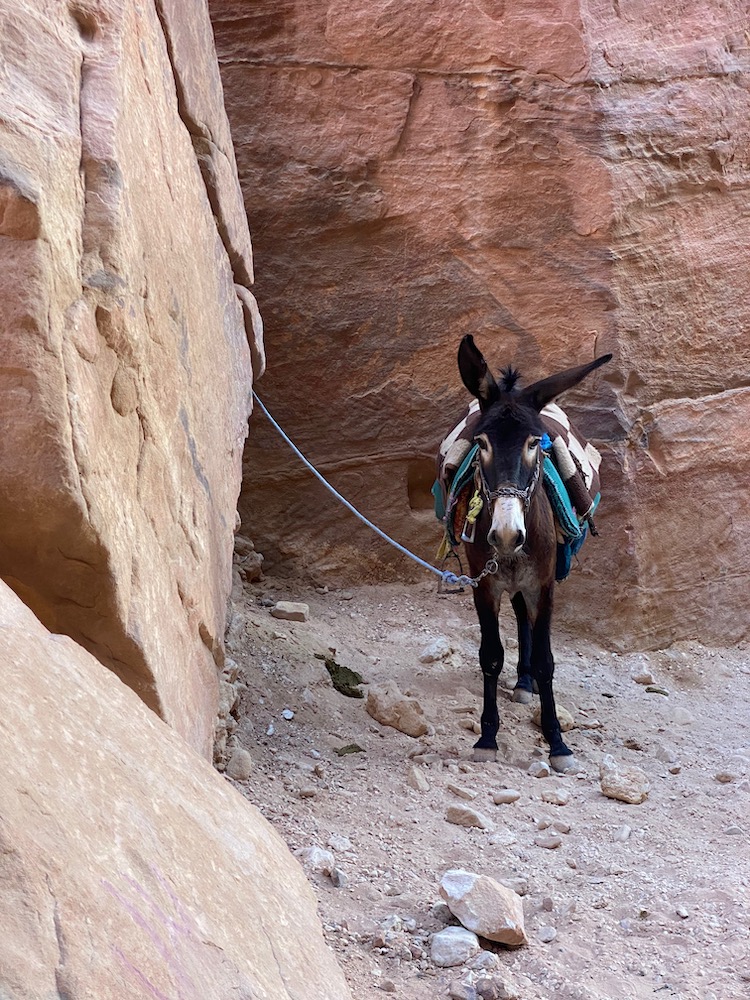 "We were the stars of our very own Indiana Jones film, discovering something astonishing at every turn," says Zurita of exploring a nearly empty Jordan.

We landed in Jordan absolutely exhausted, straggling through passport control and a mandatory COVID test before picking up a rental car to go crash in our hotel room. In the morning, we got back in the car, stopped by a Starbucks with both a smoking section and a metal detector, and took off on the three-hour drive to Petra, the Rose City. We arrived at the ancient archaeological site in the late afternoon only to find the major tourist destination essentially deserted.

Standing at the foot of 2,000-year-old rock-cut tombs with no one but a handful of camels as company was surreal. The light in the early evening bounced off the sandstone walls, covering everything in a warm, enchanting glow. For hours we were the stars of our very own Indiana Jones film, discovering something astonishing at every turn until the staff asked us to make the trek to the exit as the sun began to set. Having seen just a fraction of the site, we retraced our steps through the Siq, a 1.2-kilometer path first used by the Nabatean civilization to enter Petra through a slot canyon with walls towering over 200-feet high. The next day we came back to climb the 800 steps to the Monastery, hidden high in the hills, before leaving Petra to set out for the desert.

Four months to the day after our first date, Matt and I rode in the back of an ’80s Toyota pickup across the Wadi Rum desert where we checked into a space-age geodesic dome suite at the Memories Aicha Luxury Camp. That night, we laid outside watching the Milky Way bloom in the sky. We could have been on Mars. Our last days were spent driving up the Dead Sea Highway, checking in for a luxurious two nights at the Ma’In Hot Springs Resort. We spent an afternoon drifting in the Dead Sea where the swirling, mercurial water held us afloat as if we were, in fact, on another planet. Swimming through space in our own little world. Alas, real life called us back the next morning as we boarded a flight for the long journey home. 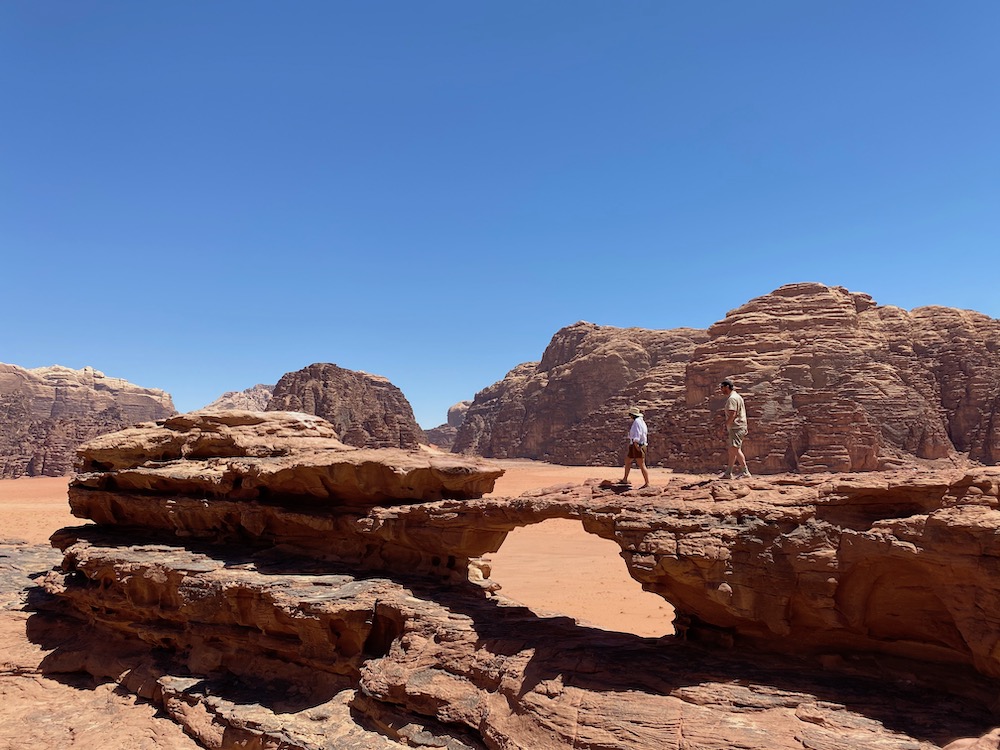 No SpaceX ticket needed for this Martian landscape. This ethereal view plus the geodesic dome hotel made Jordan an otherworldly experience.

Of course, the experience wasn’t without its challenges. Plans changed on a dime. We had to arrange multiple COVID tests, keep track of tons of paperwork, and pack stacks of facemasks. Matt caught a stomach bug. My arm broke out in an indeterminate rash. We traded bouts of grouchiness here and there. All things considered, though, I’d rate our first trip an extraordinary success.

A wise, possibly drunk Bill Murray once said: “If you have someone that you think is The One… Buy a plane ticket for the two of you to travel all around the world, and go to places that are hard to go to and hard to get out of. And if when you come back to JFK, when you land in JFK, and you’re still in love with that person, get married at the airport.”

We didn’t get married at the airport this time around. However, when we landed in LAX (not JFK…sorry, Bill) after traveling around the world to places that were hard to go to and hard to get out of, I was still in love—with Matt and with travel.