The same tech boom that has transformed Oakland’s reputation for violent crime into one that’s tourist- and foodie-friendly has also fanned the flames of a housing crisis that’s left thousands displaced or unhoused. But now, as expansion inevitably continues, it’s Oakland’s chefs who are standing in to defend the local flavor.

In Slouching Towards Bethlehem, Joan Didion made observations about her home state of California that broke with popular depiction. Where others imagined nothing but sunshine, free love, and the promise of glory, Didion saw an adjoining darkness. She was intrigued by what she identified as the secret truth about California’s relationship to the rest of the world: that it is “suspended in the tension of a prevailing boom mentality and a sense of Chekhovian loss.” “Things had better work here,” she wrote, “because here, beneath that immense bleached sky, is where we run out of continent.”

That “boom mentality” is of course the legacy of the 1848 Gold Rush, the event that literally put California on the map. Wealth accumulated quickly (the boom) as Native civilizations were subjected to genocide (the loss). Today, the West Coast is the epicenter of another all-consuming boom—one that has traded gold for tech.

In 2019, the world’s best-known tech companies (Google, Apple, Uber, Airbnb, et al.) dominate the cluster of counties on California’s elbow, known as the Bay Area; together, San Francisco and San Jose account for more than 25 percent of all venture capital investment in high tech globally. 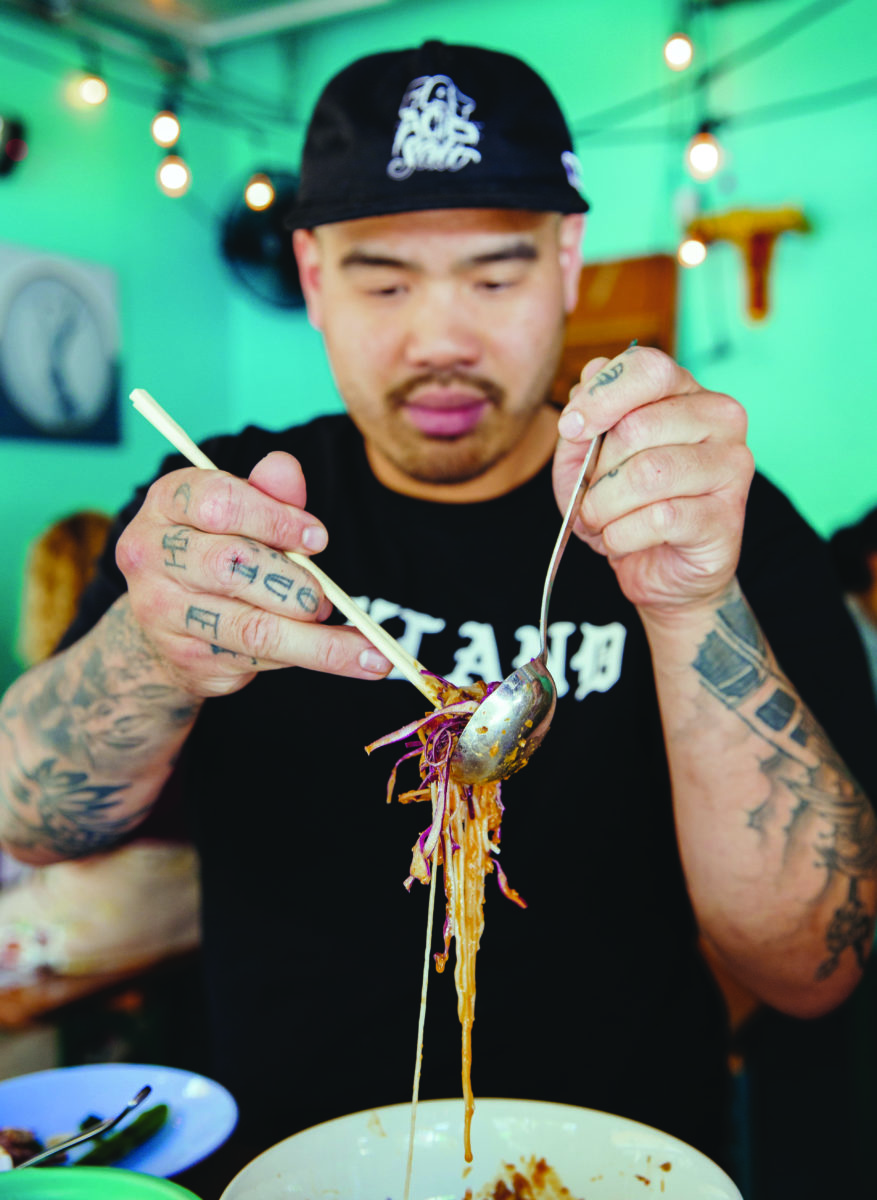 But, true to Didion’s appraisal, Californians have never known gold without blood, and this is no exception: The Bay is currently undergoing what organizers agree is a “displacement crisis.” A non-partisan 2018 survey revealed that “one in three displaced low-income households [in San Mateo County] experienced some period of homelessness or marginal housing,” and separate reports show that the unhoused population in San Francisco has risen by 17 percent in the last two years.

“Social disparity is acutely felt in the world of food.”

Since 2000, large numbers of low-income people of color have been relocated from urban centers to suburban edges, away from quality jobs and schools. Their homes are often flipped and rented to high-earning knowledge-economy workers, sourly referred to as tech bros. And while urban regions across the U.S. are universally subject to critique over gentrification, PolicyLink, a national institute advancing racial and economic equity, has called this phenomenon the “resegregation” of the Bay Area—identifying it as one of the ugliest mutations of institutionalized racism and classism in recent American history.

Outside the iron grip of tech, this social disparity is acutely felt in the world of food. Berkeley, affluent and academic, is 59 percent white and celebrated as the “birthplace of Californian cuisine”—a bastion of the “sustainable,” the “farm-to-table,” and the “organic” before any of those terms carried cachet.

Meanwhile, in pockets of neighboring Oakland (37 percent white, 24 percent black, 16 percent Asian), food deserts aren’t uncommon. “Some of my homies never saw a whole tomato outside of a burger,” says chef Tu David Phu, a darling of the pop-up restaurant scene and a contestant on Season 15 of Bravo’s Top Chef. But where food has historically been an indicator of division, some Oakland chefs see an opportunity for unification. 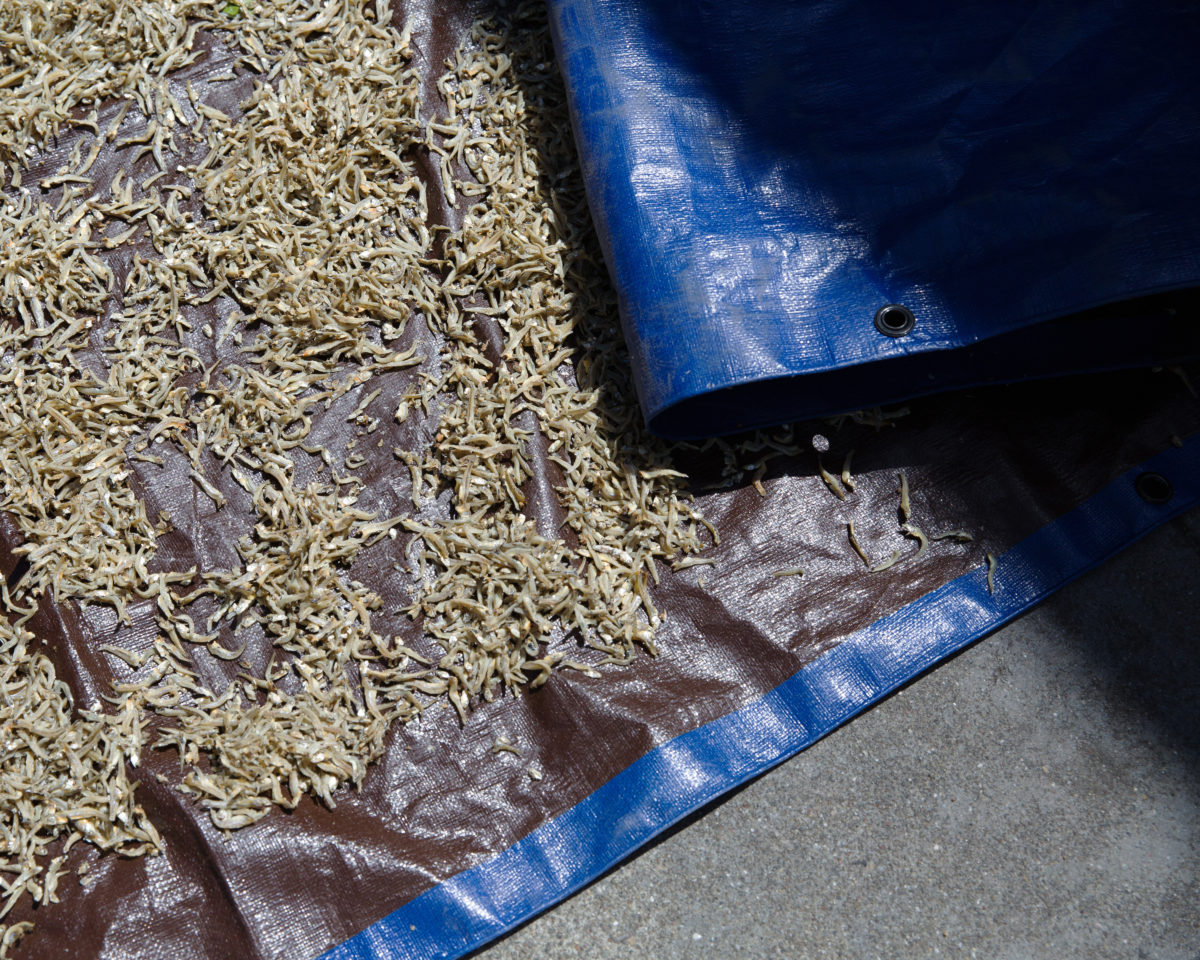 Phu and his girlfriend Jean, who makes and sells kimchi under the name Kimchee Jeanius, meet me in a pocket of East Oakland unofficially known as Little Saigon, near Phu’s childhood home. Between stops at Ba Le for banh mi and Pho Ga Huong Que Café, a favorite hole-in-the-wall specializing in chicken pho, he offhandedly mentions his childhood friends who sold crack on their doorsteps, painting a vivid picture of how Oakland came to bear its once-troubled reputation.

“I’m very prideful of coming from a place like that,” he says of his city’s resilience. As a chef and community figure, Phu is passionate about using food to bridge gaps. Over steaming bowls of soup, he tells me about Quentin Cooks, where he’s been volunteering for the last few years. It’s an exit and rehabilitation program at San Quentin prison designed to teach culinary and fine-dining skills to inmates on the path to employment.

“‘Some of my homies never saw a whole tomato outside of a burger.'”

He’s also working on plans to open a chain of high-quality fast food restaurants—his way of making delicious dishes without “catering to the elite.” “If you want your food to be impactful, your food has to be for everyone,” he says. Embodying his culinary altruism, he heaps a spoonful of ginger scallion paste into my pho, giving it a silkier texture and unlocking a world of hidden flavor.

Phu doesn’t currently own any brick-and-mortars; but chef Sarah Kirnon, owner of Caribbean soul food cafe Miss Ollie’s, tells me that restaurant owners in Oakland absorb the burden of the unstable housing market in unexpected ways. 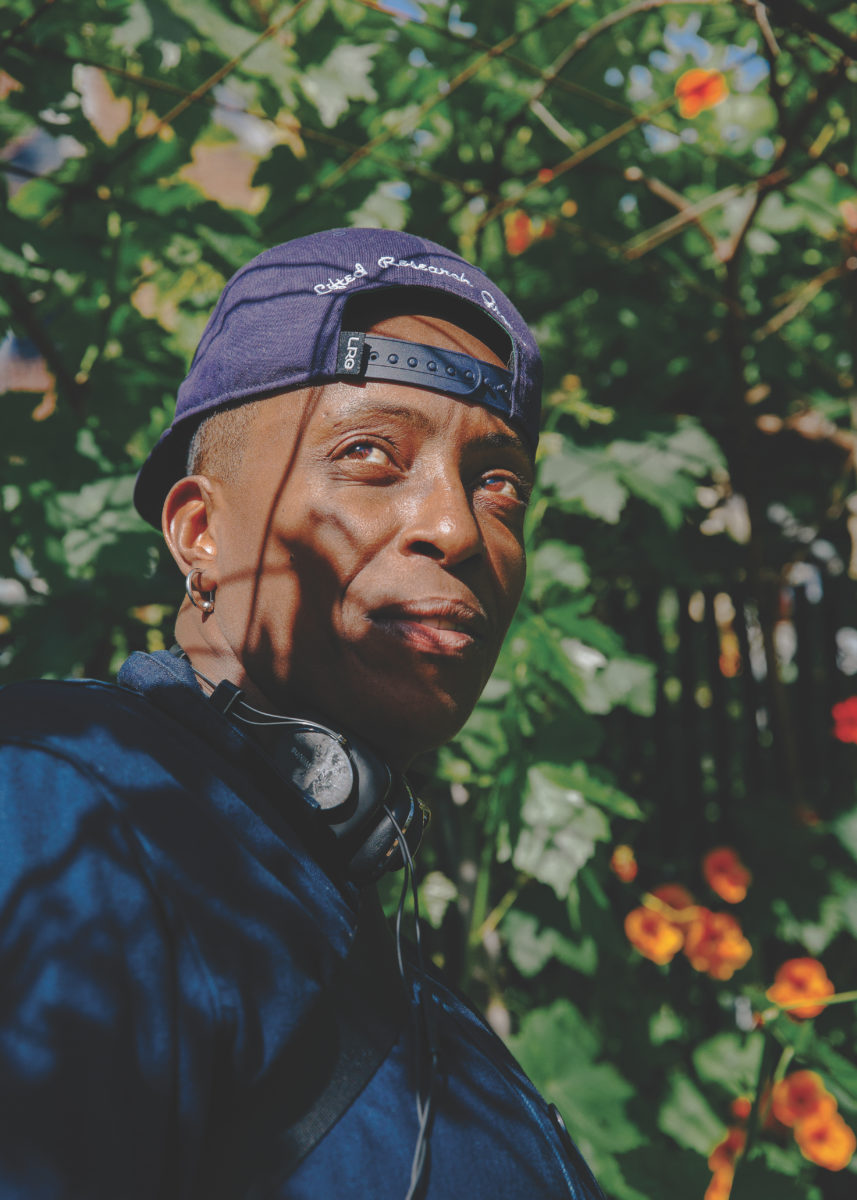 Chef Kirnon grew up between the UK and Barbados, but has lived in the Bay Area for over 20 years.

“We become a magnet for people begging for money, begging for clothes. We’re constantly giving food away to people who are hungry,” she says. “It’s especially hard to be a black-owned business in this part of Oakland. There’s a very small profit margin here. As a business owner, where and how do you serve best?”

But Kirnon is well on her way to answering her own question. This year, with business partner Kanchan Dawn Hunter, she purchased a small farm on what used to be an abandoned lot on MLK Jr. Way, between Downtown and North Oakland.

Alongside her chicken coop and her kale plants, she grows natural remedies—teas and medicinal blends of raspberry, burdock, and dandelion, which are “good for the immune system”—in an effort to aid an ailing population, one person at a time. “I’m sure you saw the housing situation on this street,” she says to me, referring to the string of tents that stretch along the sidewalk across from the farm. “I’m a fan of plant-based medicine and healing through nature. The things that heal you most are within arm’s reach.”

“‘If you want your food to be impactful, your food has to be for everyone.’”

Herbal remedies, however, can’t solve a crisis of this scale, and Kirnon knows it. She’s been working with the local chapter of PolicyLink on a larger project that aims to help Oakland restaurant owners introduce a nonprofit element to their business models.

“The small businesses and the larger restaurants need to have some sort of socially responsible thing—and it’s not just having a kitchen garden,” she says. “It’s something that can really impact a community that’s suffering.” As a start, she suggests dedicating time for a weekly soup kitchen and doing extra outreach around holidays; in 2016, the first Thanksgiving soup kitchen at Miss Ollie’s served over 800 people in one day, she says. 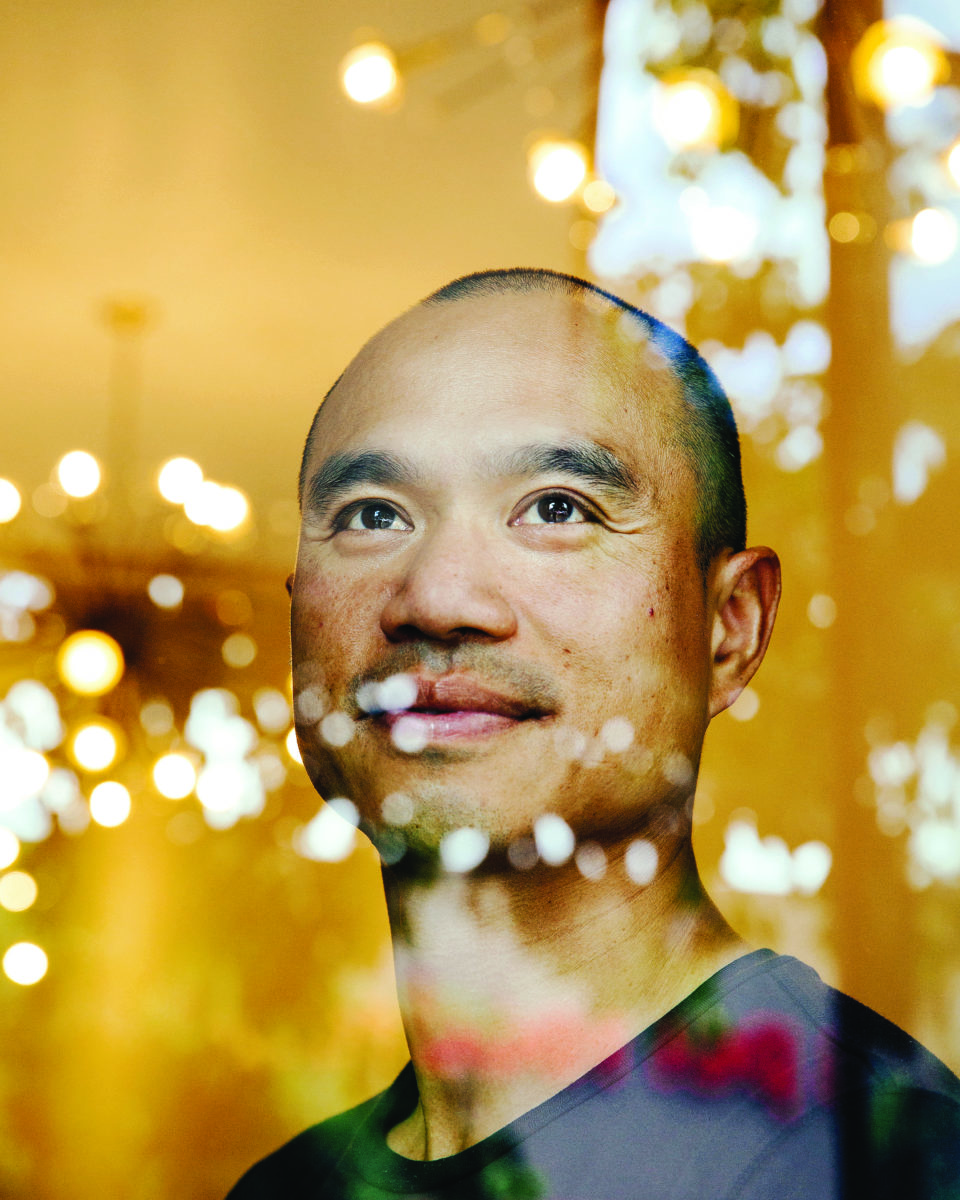 Chef James Syhabout is the owner of the Bay Area's only Michelin-starred restaurant, Commis.

Another restaurant feeding Oakland’s soul is Commis, a pioneer of fine dining in the East Bay, helmed by James Syhabout. Years before he became a chef, Syhabout and his family fled to Oakland in 1981 following the Vietnam War, something he writes about in his 2018 book Hawker Fare. In 2009, he opened Commis in the Piedmont neighborhood. “At that point I didn’t really think there was a market for it per se, but I always wanted to do something fantastic in Oakland,” he says. “I love fine dining and I just felt like, why isn’t there a nice restaurant in Oakland? When we opened Commis, it was pretty much a culinary desert.”

Within four months, his had become the first and only restaurant in the East Bay to have earned a Michelin star. “It was a feel-good recognition, not just for myself, but also for the city of Oakland,” he says. “Like wow, Oakland’s a food destination now.”

With Commis’s commercial success, Syhabout has been careful not to disrupt what he affectionately calls Oakland’s “blue collar” roots. “You come in here in jeans and a T-shirt and you’re just fine. Be who you are,” he says. “We’re creating comfort for those who’ve never been to a fine-dining restaurant before; it can be intimidating sometimes. A lot of diners come to Commis and they’ve never heard of a Michelin Guide. We take our craft seriously but we don’t take ourselves seriously.” 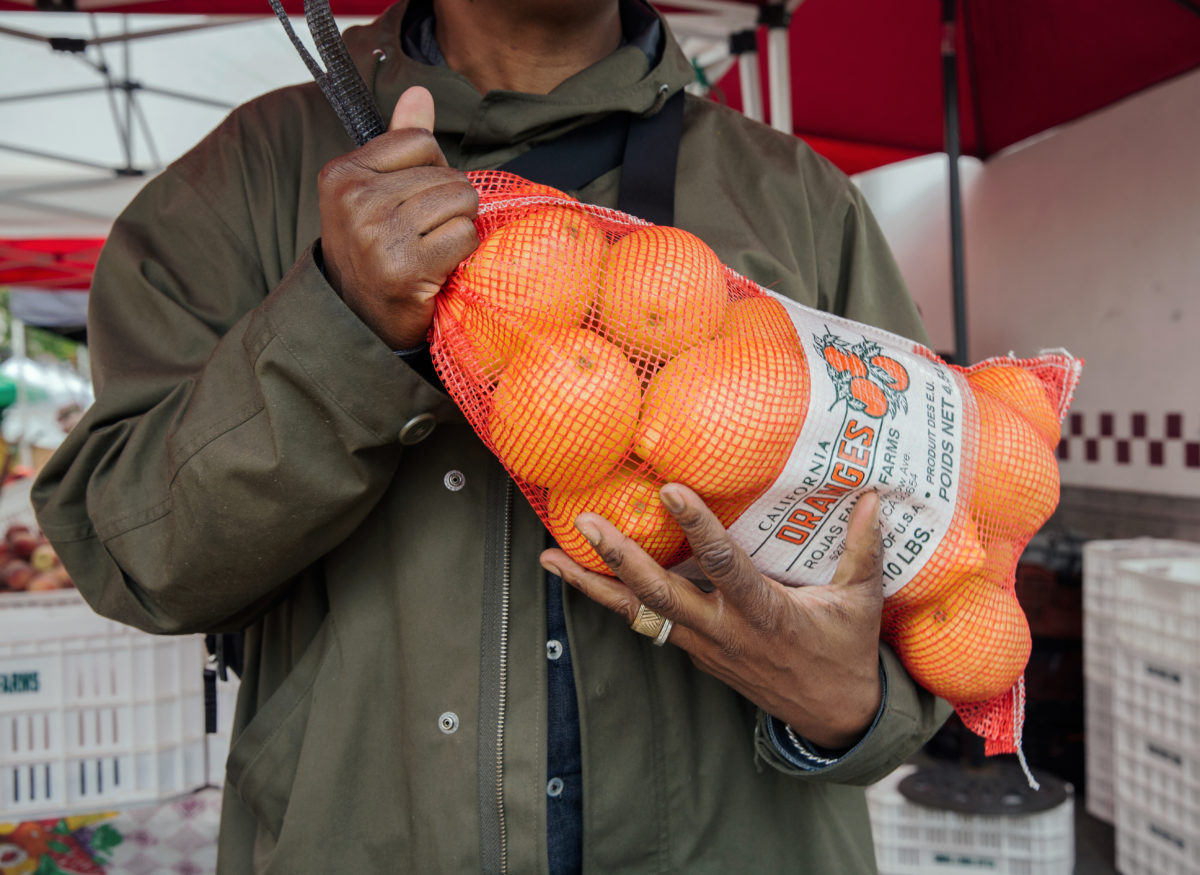 At the Urban Village Farmers Market, just steps from Miss Ollie's, most of the sellers are Hmong immigrants.

As of 2017, the Bay Area has the third-largest unhoused population in the country, behind New York City and Los Angeles; but unlike New York, where only five percent of the total unhoused population is reported as unsheltered, 67 percent of unhoused people in the Bay Area are living without shelter—which means visitors are going to face the “displacement crisis” head-on. There are tent cities and camps of people living on sidewalks and out of cars. There are children and elderly people begging for money. It’s a challenge to visit Oakland and not feel disturbed.

“California is all of these things at once. It’s the best and the worst. The dream and the despair.”

That’s not to say you shouldn’t plan a trip to Oakland. You should. Growth in tourism has introduced more than 7,100 jobs to the city over the last two years, as visitors seek out the arts districts, dynamic queer scenes, and small businesses that showcase local designers and craftspeople.

Though the city struggles with gentrification, its residents still represent cultures from around the world and speak a total of 125 languages, making it one of the most diverse cities in the country. In one day, you can find Afghani bolani (stuffed bread) at Kamdesh downtown, Puerto Rican arroz con gandules (sofrito style) inside a convenience store in the Dimond District, and rare Guangxi noodle specialties in Chinatown. 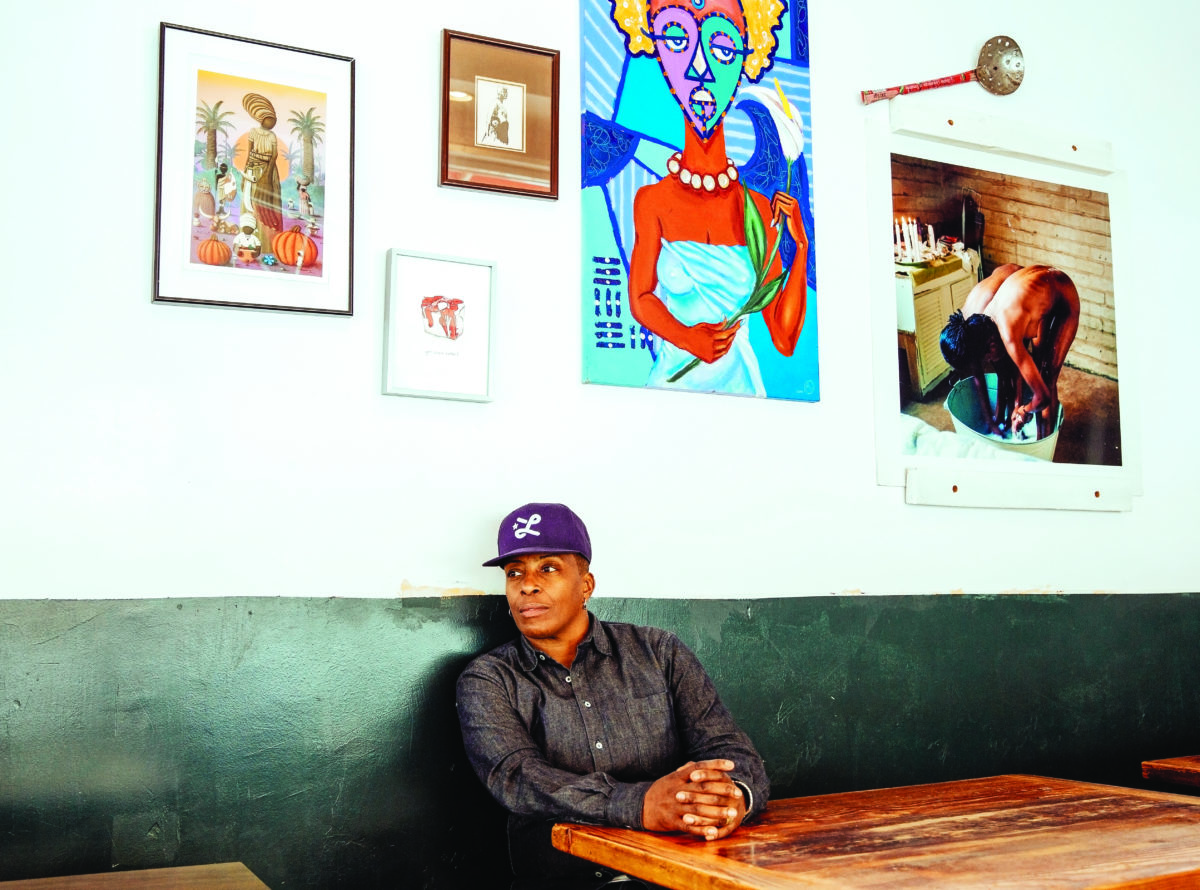 At Miss Ollie’s, Chef Kirnon whips up a mezcal-based Creole Margarita from behind the bar. It’s smoky and sweet and has a bit of a kick.

There are impressive markets, too, like the Urban Village Farmers Market where I meet Kirnon before she takes me to the farm. Featuring mostly Hmong sellers, it pops up weekly in Old Oakland, conveniently just outside Miss Ollie’s on the corner of Washington and 9th Street.

Here, I glimpse a scene that outsiders often mistake as characteristic of the entire West Coast—the almost comical Californian ideal that I so miss now that I’ve moved away: the long-haired man playing an acoustic guitar in his bare feet, the cartoonishly large citrus fruits. There’s an abundance of local produce and of beautiful people to eat it, their faces set in the glow of milky morning sunlight.

And at the same time, Kirnon speaks candidly about this broken system, this place that sounds more like a war zone than a major U.S. city—and just steps outside the market, I can see it for myself. California is all of these things at once. It’s the best and the worst. The dream and the despair. The boom and the loss.

Though Kirnon’s work is hardly ever easy, it’s her community that has kept her here for the last 25 years. “We’ve got to stay where we are on that corner,” she says. “We’re not just in this for selling food. We’re family. We’re kin.” Maybe we’ve already run out of continent as Didion feared; but at Oakland’s table, there’s plenty more space.